Ecuador: A Beautiful Country with a Beer Problem 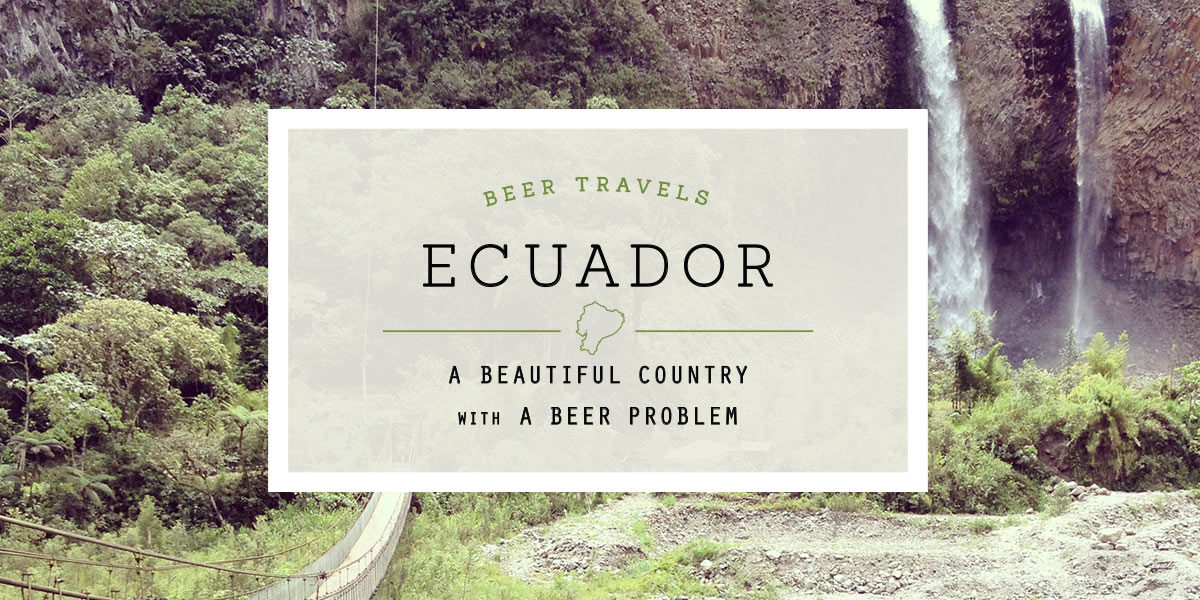 It’s quite possible you couldn’t paint a more beautiful landscape if you tried. Honestly, much of this place looks like a frame right out of Jurassic Park. Thick, lush vegetation pinned between the Andes to one side and Amazonia to the other. You could spend half your time in this place snapping photos worthy of gracing any postcard. The perfect place to enjoy a delicious, hoppy, local pint…

Recent travels had landed me in South America, a respite from the bitter Midwest winter. The country: Ecuador. My to-do list included Andean hikes, Incan ruins, a cuy dinner, something dubbed “the swing at the end of the world” – and a now current staple of any of my travels: a craft beer hunt. The latter being the hardest bit to accomplish, but not much of a surprise really. South American countries haven’t quite taken to the craft beer revolution that has all but flooded it’s neighbors in North America. Plus, I was given fair warning from my friend who I was headed to visit, “If you want good beer, you might want to bring your own – there are only 2 beers in this country.” And for the most part, he wasn’t kidding. Like many countries not keen on variety, there were essentially 2 nationwide options: Club (Pronounced “kloob” of course) & Pilsener. As you might guess from the name, these are of the lager variety. The Brahma was a little less common at the bars, but proved less bitter. So I tended to grab for those when I could.

Of course, each of those mainstays supported a handful subsidiary options; Club Roja, Club Negra, Pilsener Light, etc. Further investigation would actually find a few “craft beer” options to pair with cuy dinner. And from what I gathered, all of which may or may not’ve been limited to 4 or 5 craft operations nationally, for Ecuador.

Nestled on a quiet corner overlooking Baños’ main town square, Parque la Basílica, Stray Dog boasts plenty of potential. Upon entering, you’re greeted by a cozy first floor bar with seating for 10 or so and plenty of character. We opted to head upstairs to a lofted overlook. Having had come in from a drizzly hike, we were eager to sample the goods. That, and this was our first stop at any craft beer spot thus far. The brewpub offers 4 or 5 of its own rotating taps, all for $4 a pint; steep by Ecuadorian standards (a Club or Pilsener would run you about $1). The beers are brewed offsite under contract by La Cascada Brewery, a few blocks away. Stray Dog proclaims “the water used in brewing the beer is drawn from a natural spring near the thermal baths, ‘Agua de La Vida,’ and has been blessed by the Virgin of Agua Santa. I should note, the town of Baños is named so, after the numerous thermal baths in the surrounding mountains. So, this sacred water carries with it a high reputation.

On the menu was the Saison Pale Ale, Flemish Red, Stray Dog Stout, Inca Wheat and Atahualpa’s Gold. I went after tasters of the last 3. And all in all, they exhibited that similar aftertaste some early/experimental home-brews have. Can’t quite put my finger on it, other than to say they tasted “unfinished.” The best of the crop was the Atahualpa’s Gold – although arguably not even as refreshing as a the abundant Pilsener.  The Stout was not at all stout-y, other than the hint of darker color, compared to the rest. And the Inca Wheat was a bit tart for my taste. My friend also let me sample the Red, which really was amiss. In a blind taste test, you might never have guessed that it was a “red” even.

I wouldn’t say that any of the brews were undrinkable per say, but unfortunately not memorable either. Not a great first step into the Ecuadorian craft beer scene. But, as the only microbrew option in town, or the region for that matter, you get what you get. The Stray Dog also happened to be founded by 2 Chicagoans who’d settled in Baños and also owned a popular restaurant in town. Having had later tried the food there, I would say with ease that the grub much outweighed the quality of the beer. But hey, props for even having opened a “brewpub” in a small town in a country that, like it or not, does not really focus heavily on beer. And I can only imagine how hard it must be to gather choice hops and malts for brewing there. In any case, on to the next…

A bus ride 8 hours south of Baños will land you in the culturally-rich city of Cuenca, Ecuador’s third largest. Here, history and art is abundant, but again, craft beers…not so much. Still, the city hosts 2 of the country’s few craft brewing operations. The first of those is La Compañia. Situated in the garden-level of a several-hundred-year-old corner building, this place also is not void of character. It offers spectacular views, at street level, of the beautiful 19th-century church of Saint Sebastian. In the 1700s, the church’s plaza was used for bull flights. Now, that has nothing to do with the beer, but it is worth mentioning just to give perspective – you don’t find brewpubs in the States with a building history like that.

But the beers…ahh the beers. For one, they are large. Large and cheap. A 34oz mug will set you back $4. Again, expensive for a local’s taste, but you can also get a regular 16oz pint for just $2. La Compañia’s offerings were similar to that of Stray Dog, but packed –albeit slight – more punch. I first tried my hand at their Irish Red Ale, Misionera. Listed at 6.5%, this thing felt like it carried more weight than that. Also, it really didn’t seem to match the profile of a Red. It was pitch black in color, from any angle. Next I lightened it up with the Extra Golden Blonde. Not as watered down as the Ecuadorian staples, but also not quite memorable. Last up was the Stout Nitro. This one was smooth going down, as you’d expect with a nitro. But, it left ya with an unexplainably tinny aftertaste. Still, this might’ve been the best craft I had the whole trip.

La Compañia: an amazing space chocked full of cozy vibes, with so-so brews. I will say, though, it did rise above the expectations set by my friends who live in Cuenca, it just didn’t offer any very unique beers.

Last on the craft beer tour during my stay was the Andean Brewing Company. Also in Cuenca, but in a more residential part of the city, ‘Andean’ certainly had the most unique beers. Opened in 2012, it boasts a contrastingly modern feel, but still a likely cozy hangout for many of the neighborhood’s expats. It gave off the vibe of a brewpub that was really going after a craft beer crowd.

Here, we went the route of the flight. Four 6oz brews to be precise. First tried was not a beer at all, but instead a cider made from a very popular fruit in the country: the naranjilla. The Sidra de Naranjilla was very sweet, as one might expect, but still pleasant. I am not one for ciders normally – or any fruit-filled brews really – but this was enjoyable, especially as a take on a local ingredient. Sadly, this would prove to be the most flavorful beverage of the batch. Next up was a beer of the likes I’ve never seen before, but was intrigued by, a “carrot cake ale,” the Conejito. Whoa. This acted as a stark contrast to the cider. It was billed as a beer with “hints of cinnamon and all-spice, alongside carrot and unique hops.” It was definitely unique, but one that I could not even finish unfortunately. Then, the brown ale, Ambar. Somehow, this was even a step down from the carrot beer. It was off-puttingly sour. Yes, sour. And I swear I can still remember it’s lingering taste. I consider browns one of my favorite styles, so imagine my surprise when a beer described as “having hints of chocolate and coffee present as well as medium bitterness” came across as sour. I don’t know what went wrong there. To round out the group was the Matamba Stout. Definitely the most pleasant of the lot, the Matamba actually rang more as a brown than a stout, with hints of caramel and coffee. However, it was really lacking in body. In any case, I was happy to go out with that beer – my last taste of Ecuador’s craft beer “scene.”

If I had to sum it up, I would say that this quaint South American country’s problem really lies in its residents’ interest (or disinterest) in craft beer. This isn’t surprising, really. Not many folks would look to beat the heat after a long day’s work with a “Carrot Cake Ale” or an iffy-at-best stout. Lagers are blue-collar brews. They’re familiar. They’re refreshing. And a cold bottle of one of those proved to be most appealing for me even, by the end of the trip. But heck, Ecuador has plenty of other things going for it, than it’s craft beer. And trust me, that’s ok. 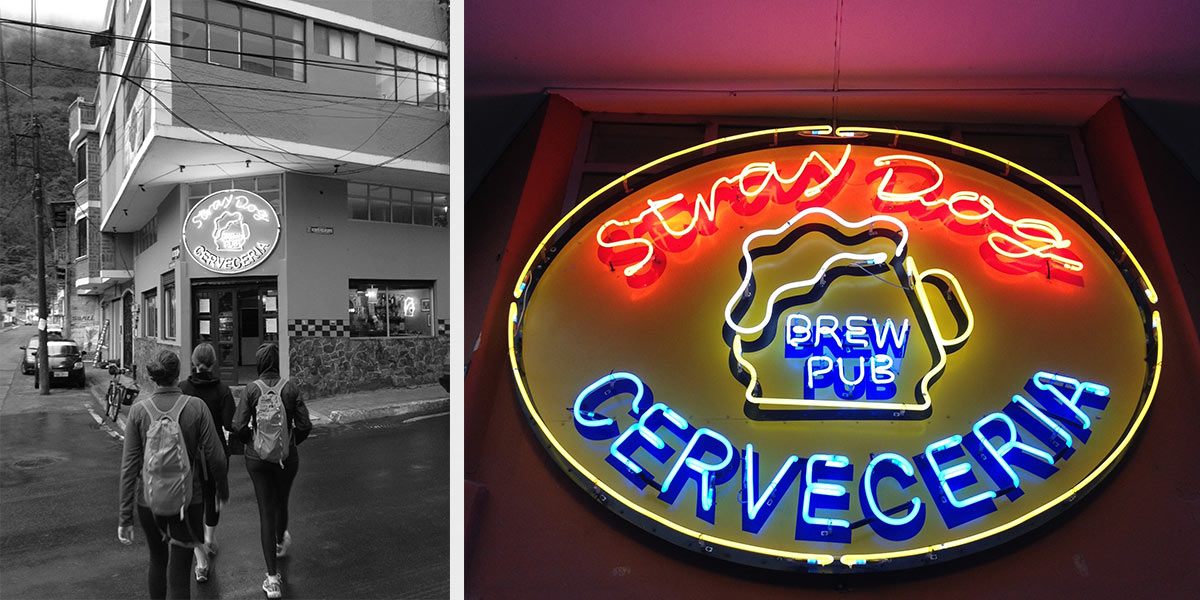 Since my visit, I’ve caught wind of Bandido Brewing, in Quito. Unfortunately I wasn’t aware of this spot during my brief time in the city. But its reviews are already piling up since its opening in early 2013. In fact, it seems that Bandido, founded by a few Pacific-Northwesterners, have finally brought some flavorful variety to the country. There is hope, Ecuadorians!