What Exactly Is a Milkshake IPA? This is a paid, sponsored post presented by our friends at Oregon Fruit Products.

Undoubtedly the most trendy and talked about beer style of the past decade is the hazy IPA. The style comes in many forms, including the Milkshake IPA.

Although the style has been proliferated by talented New England breweries like The Alchemist, Tree House, and Trillium, the popular spin on the modern IPA has popped up around the world.

As a result of so many iterations, the hazy IPA — also called the New England IPA — has seen riffs and remixes.

For instance, we’ve seen it doubled, tripled, and even quadrupled.

However, for us, the most exciting continuation of the style is the milkshake IPA.

What Is A Milkshake IPA?

“I would say the bare bones of a Milkshake IPA would be a Hazy IPA brewed with milk sugar,” says Rob McCoy, Production Manager at Great Notion Brewing. “The combination of milk sugar and fruit is what really defines these beers and puts them in a new category.”

In other words, the use of lactose (unfermentable milk sugar) and fruit defines the milkshake IPA. As a result of these ingredients, beers take on a smooth, delightful mouthfeel, similar to the sensation you’d expect in a milk stout.

Additionally, many brewers build that silky, creamy texture by adding fruit. The addition of fruit can also inject tartness, tropical flavor, or candied sweetness into a beer.

“The style is defined by an above-average haze that gives the impression of viscosity,” says Kevin Vincent, Parish Brewing Co.’s Lead Cellarman. “Lactose is a staple ingredient that lends some confectionary sweetness under the usually high dry-hopping rate.”

Why Has The Milkshake IPA Been So Popular Lately?

“I think brewers have been taking more culinary approaches to their beer to stay inspired,” says Vincent.

While Parish Brewing Co. hasn’t released their own version of the milkshake IPA, they’ve become industry leaders in the hazy IPA category.

Vincent himself has enjoyed the creativity on display in many milkshake IPAs.

“Personally speaking, being inspired by food science and the culinary arts, using fruit in a craft manner lends many opportunities to influence appearance, texture, and aroma of beer much more than dosing with fruit extracts and oils,” he explains. “Also, since consumers are accustomed to consuming beer with textures ranging from filtered and clean all the way to containing actual fruit pulp, it creates a spectrum of interpretations on the fruited beer style.”

Not to mention, it’s fun.

“I believe this generation of brewers draws a lot of inspiration from childhood treats,” says Vincent. “This has allowed more extreme beer styles and brands to be successful.”

Who Invented The Milkshake IPA?

Initially, the milkshake IPA style was popularized by Stockholm’s Omnipollo, as well as Tired Hands in Philadelphia.

After their initial creations, breweries across America started releasing their own versions of the style.

Like the originators, these brewers are making use of lactose and fruit purees, like those from Oregon Fruit Products, to add texture, acidity, and even color to their milkshake creations.

What Fruits Are Best To Use In A Milkshake IPA?

As McCoy says, “Tropical fruits are a no-brainer when it comes to Milkshake IPA. They pair so easily with Hazy IPA hops.”

What’s McCoy’s favorite fruit to use?

“Personally, I’m a sucker for some apricot,” he says. “It’s such a great fruit to pair with everything from IPA to barrel-aged sours.” Given McCoy’s comments, apricot would be a great fruit to try when brewing a milkshake IPA. However, it’s certainly not the only option.

“Oregon Fruit Product’s blueberry puree is magical,” shares Vincent. “From the appearance to the texture and aroma, it is excellent.”

Are Milkshake IPAs A Trend?

Is there anything wrong with that?

As McCoy says, “At the end of the day, whether it’s Milkshake IPA, Hazy IPA, Pilsner, Lambic, or ESB, I want people to be excited about beer.”

Below, we’ve picked five of our favorite recent examples of the milkshake IPA from across the country.

Or, try your hand at making your own at home with Brooklyn Brew Shop’s Milkshake IPA Kit and Oregon Fruit Product’s fresh fruit purees..

Make Your Own Milkshake IPA If you haven’t heard of the Bozeman, MT brewery, they produce progressive, creative, and tasty beers.

The milkshake IPA Opaque Thoughts used guavas and vanilla beans from Papua New Guinea for a lush, fruit-forward beer. It had the requisite amount of haze and softness with a tropical fruit pop and a slightly acidic backbone. Cerebral Brewing took us back to the candy store with this sweets-inspired milkshake IPA.

With huge candied fruit flavors and a mellow, creamy mouthfeel, Rare Treat was an exceptional example of the style. The raspberries add a slight acidic kick to this fruited milkshake. Additionally, the vibrant color adds to a fantastic drinking experience. 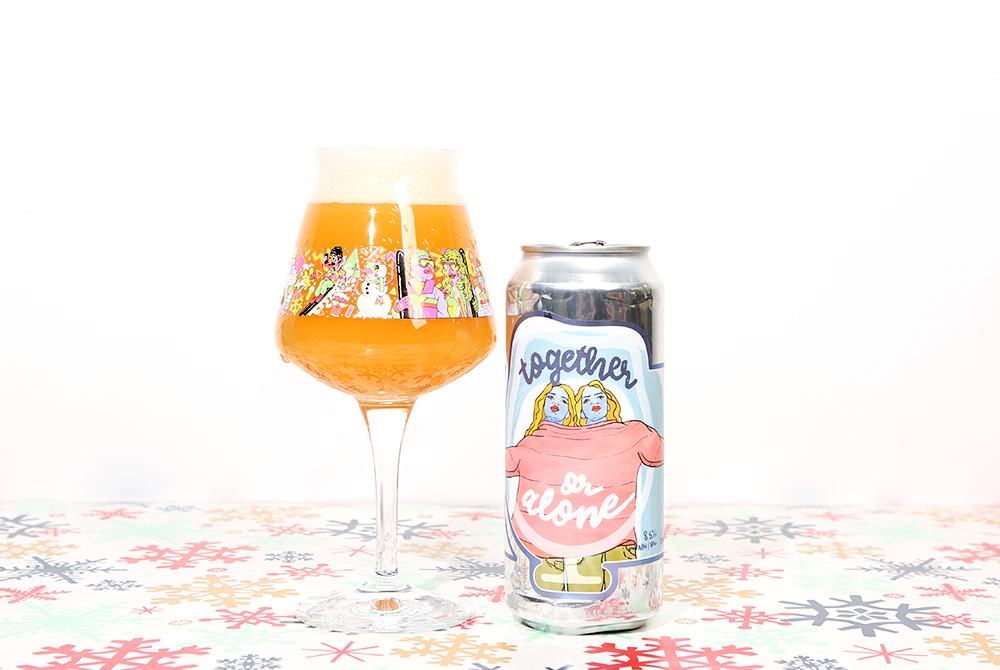 Foam Brewers didn’t use any fruit in this beer but it was just as much a milkshake IPA as any other.

The brewery makes Together or Alone with oats and lactose, making for a characteristically smooth, creamy beer.

Because its silky texture made for a perfect fireside beer, we included this in our article on the best beers to drink this winter.

This is a paid, sponsored post presented by our friends at Oregon Fruit Products.