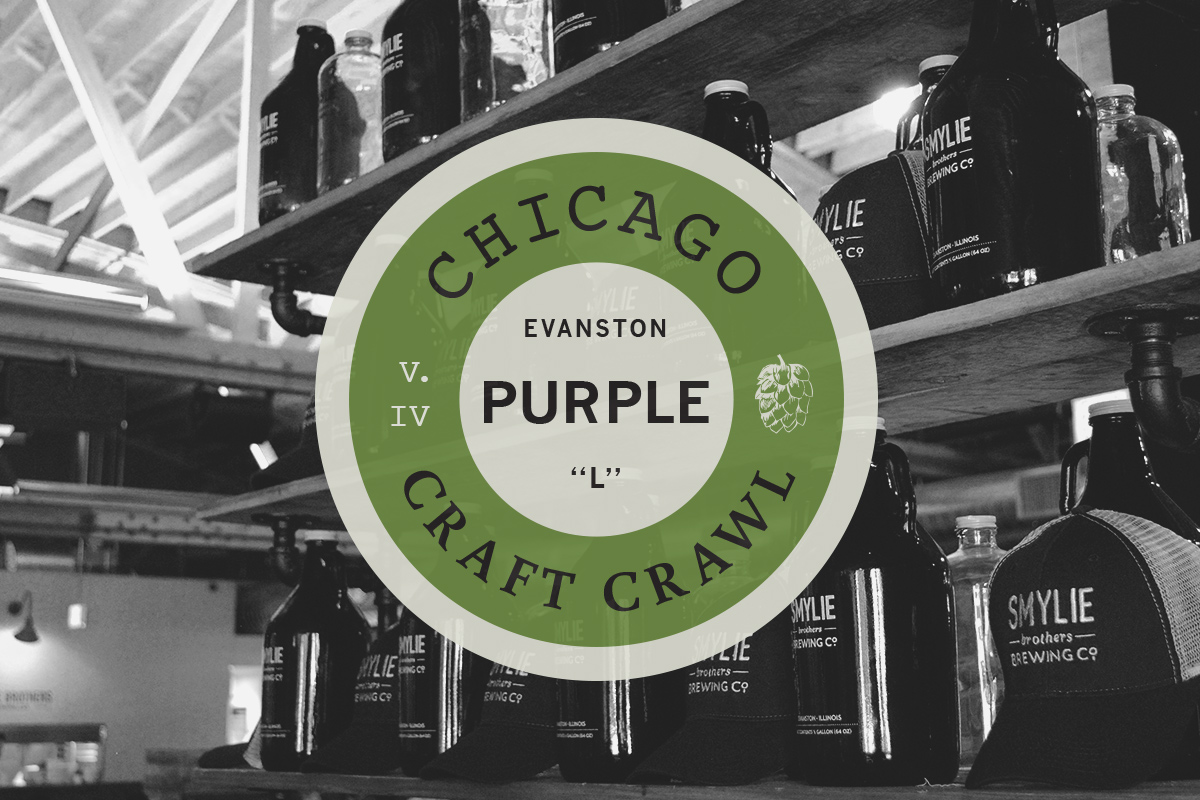 For our fourth installation of the Chicago Craft Crawl, we headed for a quick suburban jaunt up the lake. Keeping in theme of our past ‘Crawls,’ we caught the CTA to explore some noteworthy craft haunts – this time by way of the Purple Line. And although this time we ended up just north of the city, we still like to think of neighboring Evanston as an extended – really amazing – ‘hood, regardless (we’re not alone in this sentiment either). So load up that Ventra card and prep yourself for an afternoon of great beer and exploring, with The Hop Review’s Chicago Craft Crawl v. IV…

Many city dwellers know the Purple Line as the Brown’s weekday-commuting cousin, south to the Loop. However, it’s obviously also the thoroughfare that links us to that college town to the north. Evanston was already a great respite from the city, but is rapidly becoming a destination all its own, for those in seek of great food – and great beer. Also, it seems that folks looking to open a second location, this town is the spot to go; just ask Farmhouse, Bangers & Lace, or DMK. But Evanston is also home to plenty of home grown beer-focused joints, well worth the trip.

Sitting as close to Chicago as you can get, without being in Chicago, lies Peckish Pig, on the north side of Howard Street just west of the Howard Red/Purple L stop. Owners Debbie & Jamie Evans (formerly of the Celtic Knot & Tommy Nevin’s) teamed up with former home-brewer Tom Fogarty to open this gastro-brewpub in early 2014. The beers may not stray too far from traditional styles (you’ll find a Kolsch, red ale, porter, brown, wheat and a couple pale ale variations), but they are hearty enough to justify a visit. 623 Howard St., Evanston, IL 60202

A couple stops north, a block from the Main Street L station, you’ll find this small taproom. And although we weren’t able to drop by on this trip, Sketchbook Brewing Company came highly recommended by nearly everyone we chatted with during the day’s tour. (Note: This is a growler-fill establishment – no pints on site, yet…) Given it’s L-adjacency, it’s likely worth the few minutes off the train to grab some beer to-go. Next time. Next time…  825 Chicago Ave. (alley entrance), Evanston, IL 60202

Head just north to the Dempster L stop, and you’ll almost be near this crown jewel. Really Evanston’s brewing pride and joy, Temperance Beer Company is the one stop that’s a bit off the beaten path. Being in no real hurry, we tackled the one mile walk – but it’s probably best to call a cab. With brewmaster Claudia Jendron at the helm, Temperance has already gained plenty of recognition; including Silver at GABF in 2014 for English Style IPA (Gatecrasher). Aside from the great beer, you will also find a small menu and a cozy taproom and patio tucked back in this industrial lot. Tricky to find? Slightly. But worth the hunt.  2000 Dempster St., Evanston, IL 60202

Ever since getting a sneak peek of Smylie Bros. at several festivals, we were eager to get up to their home base. And we were certainly not disappointed. Housed in a shiny (well, wood-y) new facility about a two minute walk from the Davis Street L stop, this place is big and airy. The atmosphere is relaxing, the staff is more than welcoming, and the BBQ is delicious – but they are just compliments to the great beer. Really, Smylie Brothers is one of the area’s more underrated breweries. 1615 Oak Ave., Evanston, IL 60201

For your last stop, head back down the street a few minutes walk to enjoy a final pint –or bottle– from World of Beer‘s overwhelming list. The ‘B-dubs of beer bars’ you say? Well, yes. But, there is simply no denying the breadth of their craft offering. Some expected beers, but many unexpected. And what they do really well is tip the scale to what’s ‘local’ for each location. Evanston’s is no exception. 1601 Sherman Ave., Evanston, IL 60201

Below is an overview of the tour stops: 1-5, plus a few other spots worth noting…