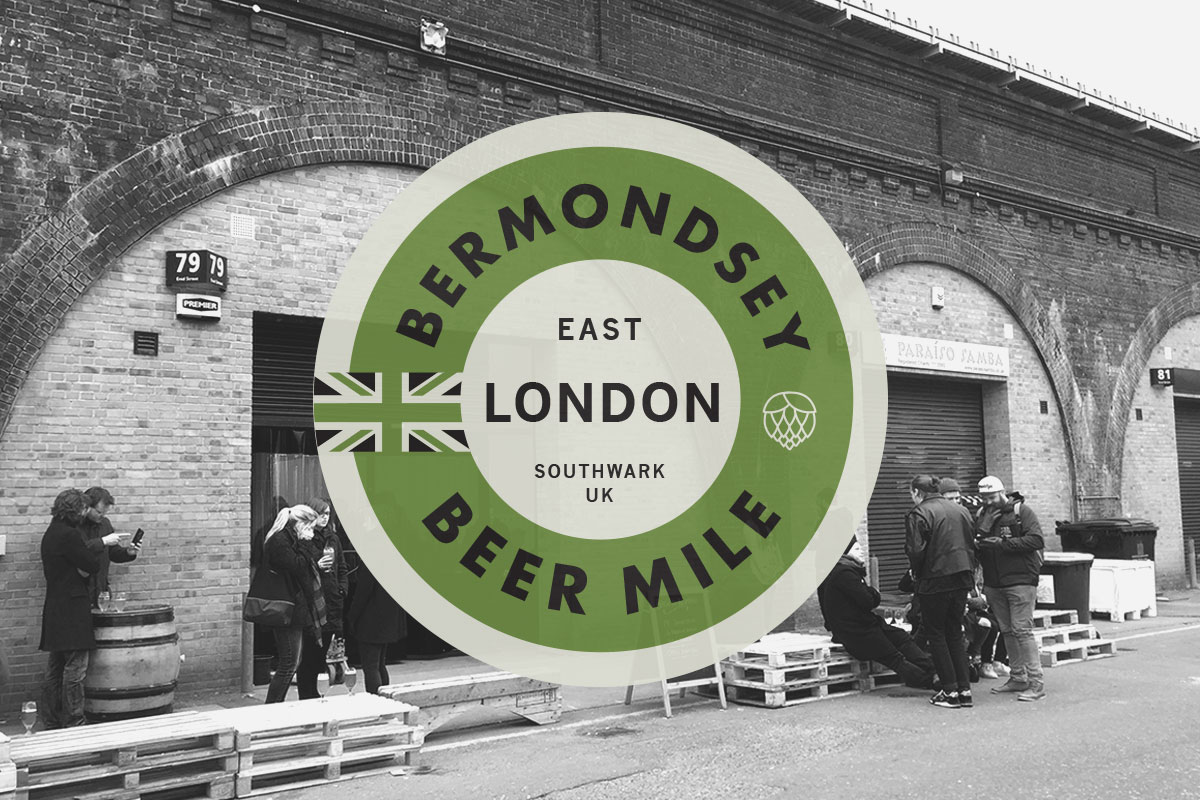 If you catch yourself in London on a Saturday with a few hours to spare – with Big Ben and the Tower of London checked off your touristy to-do list – then we’ve got the best of alternatives. Make the quick jaunt to South East London’s Bermondsey neighborhood (head to the Tower Bridge station and take the National Rail ‘Southern’ line, and make sure you get out at South Bermondsey…such an oversight in the London drizzle is no fun, trust us).  Once there, you’ll find yourself at the southeastern head of London’s touted craft beer brewery crawl, the Bermondsey Beer Mile. This new-ish phenomenon has built itself out over the last five years throughout the railway arches of this particularly gritty industrial part of town.

The tour includes six breweries (five of which we tackled, and one more in planning) and a bottle shop, aptly named ‘The Bottle Shop.’ The oldest of the mile – and arguably the most popular – is The Kernel Brewery, smack dab in the middle. Having opened in 2009, it is the craft anchor of the borough and has led the recent charge in London’s craft beer movement; interestingly enough by brewing primarily American Pale Ales.

After a week filled with ESBs and mild ales and imports consisting of Stella Artois and Heineken, this craft diversion was a welcome sight. And given the Brewdog-inspired, mostly-American-hop-character of many of these new breweries’ brews, a taste of home. It’s safe to say craft beer is having a moment in London, and honestly, it’s about time they joined the bandwagon. So clear some room on your Saturday schedule for your next trip to London and find your respite for the likely overcast afternoon, under the old railway arches in Bermondsey… 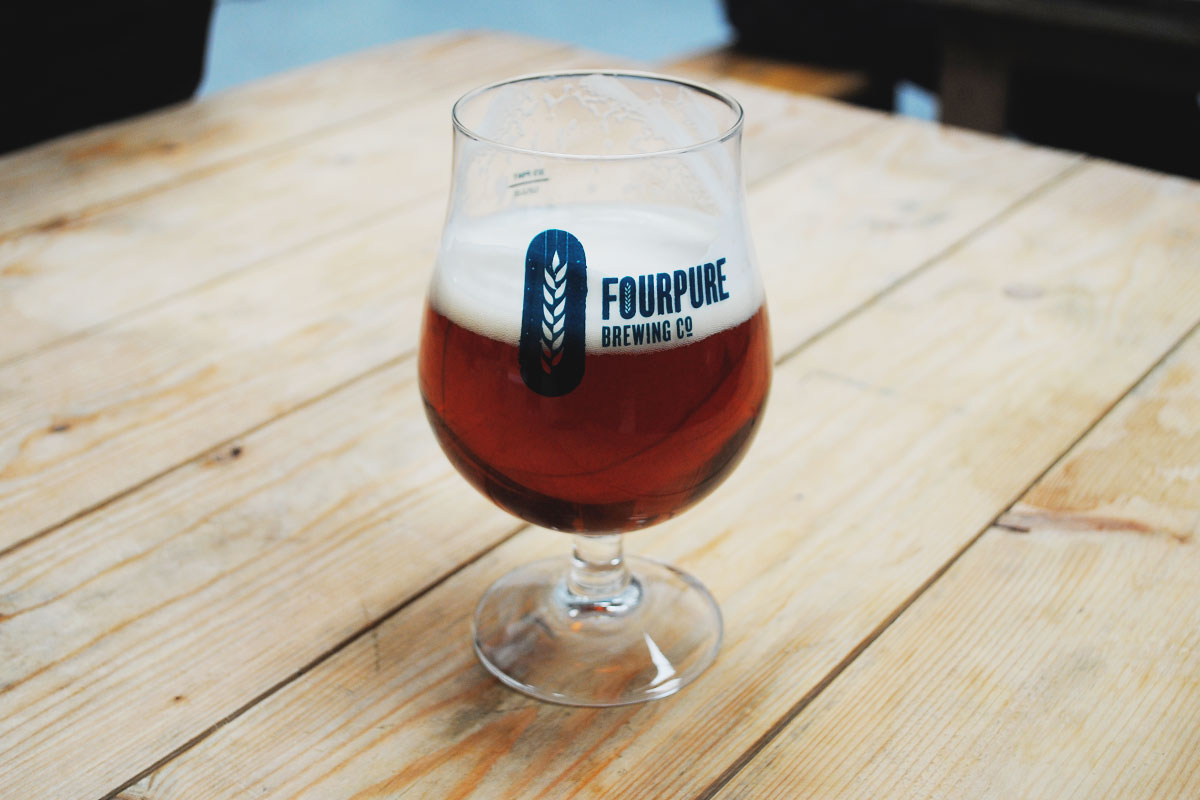 The first stop on the mile is also the hardest to find. Make sure you duck under the proper archways on your way to the nondescript Fourpure. They open promptly at 11am and start slinging pints of wide variety. This was the most diverse lineup of the day, and we started the morning out with their delicious and appropriate Coffee Stout. Next on the docket was a surprising collaboration with CA’s Bear Republic Brewing, their APA Transatlantic Overdrive.  We recommend both of these, then some snacks before covering the biggest gap in the crawl on your way to Partizan Brewing. 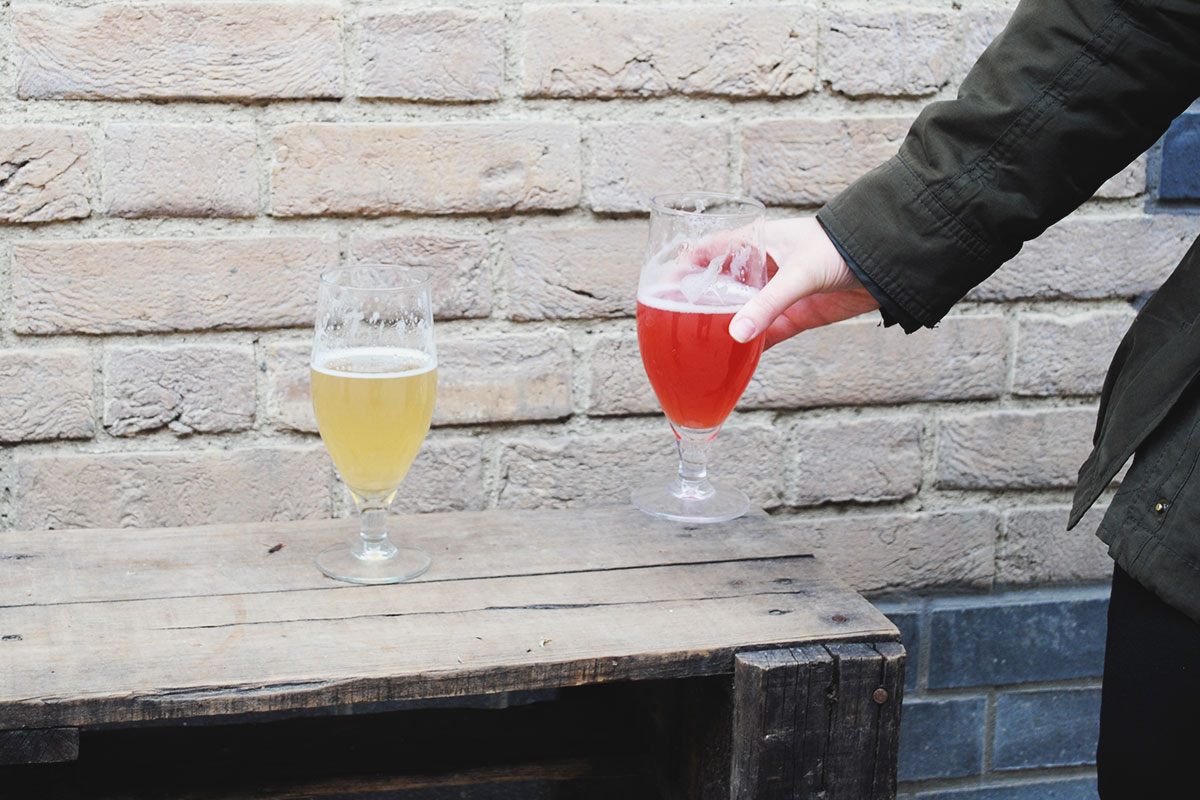 Possibly the most unique of the 6 breweries, Partizan Brewing offers up plenty of beers in the tangy/sour/farmhouse spectrum. Specializing in Saisons, Partizan does an excellent job of getting your taste buds jumping, with these effervescent offerings. We tried a handful from the menu, but particularly liked the Lemongrass Saison and the Mango & Black Pepper Saison. It was really intriguing to see such a young brewery hone in on such a specific brewing style. And it definitely didn’t disappoint. We brought a few bottles home with us – and only managed to drop one on the way! 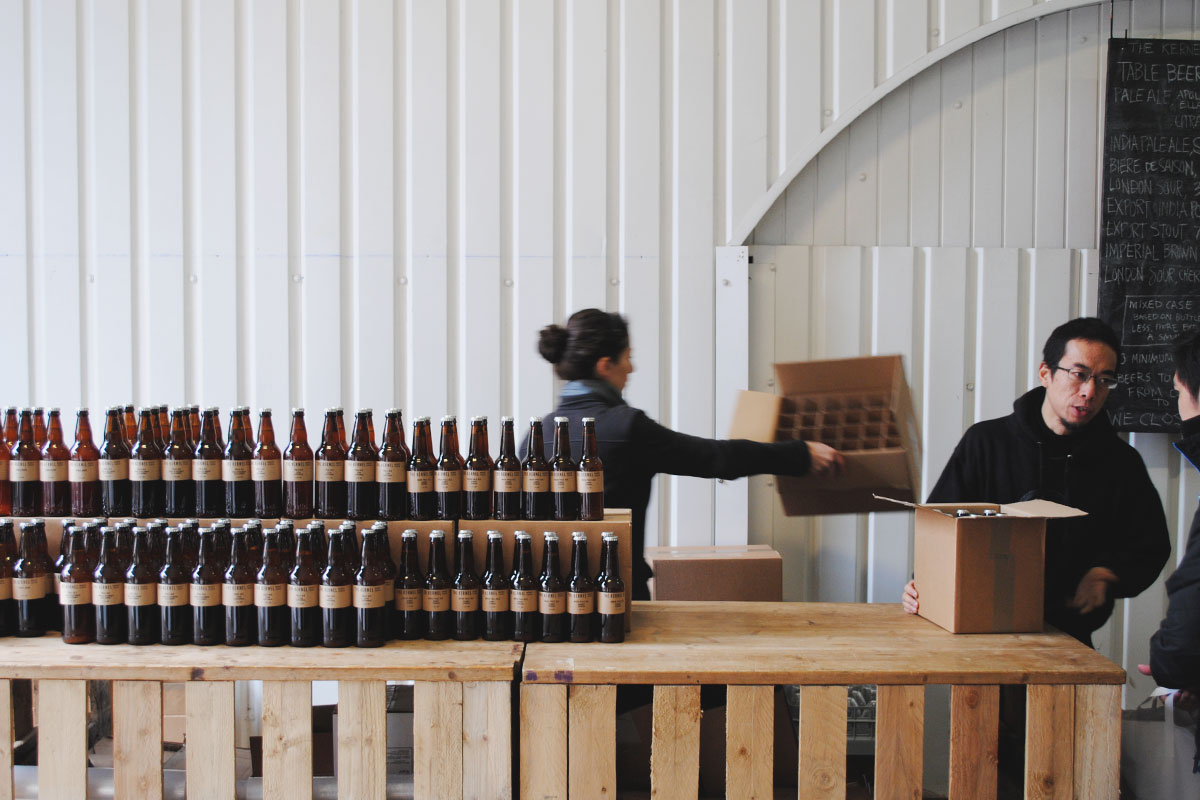 Stop No. 3 brings you to the crown jewel of the trip, as well as the longest line of London craft beer fanboys and girls. By this point you’ll be ready to hit the loo, so make sure ya do so before getting in your first line of the day, at The Kernel. Then get ready to choose from a menu loaded with American hop-inspired beers, plus a couple of sours and stouts. With all the hoppy hype, we had to compare their versions of APA to ours back home, so we went for the simply named India Pale Ale Citra and India Pale Ale Simcoe. We also tried their Berliner Weisse, London Sour. All provided a unique London spin on the traditional style. Make sure you grab a few of their distinctly labeled bombers to go. 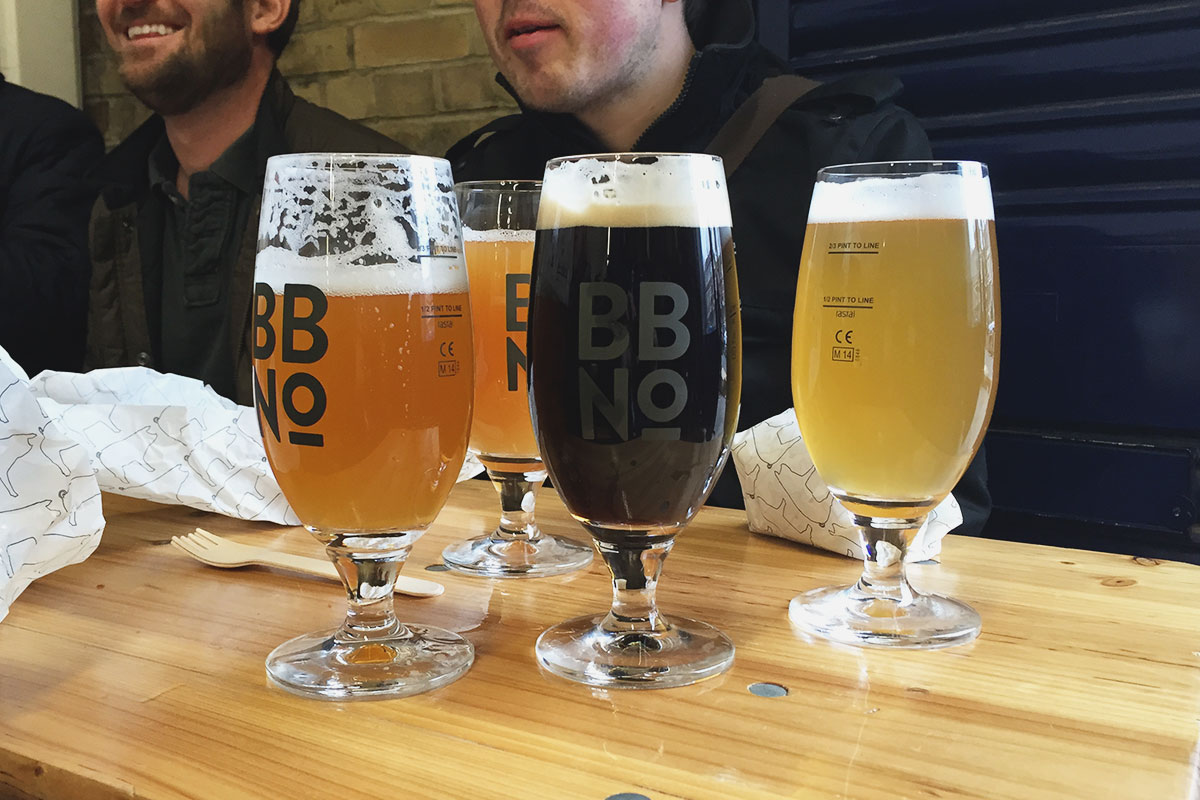 Next up, head down the railway arches to likely your next line of the day, at Brew By Numbers. By now, plenty of other thirsty Londoners will have made it out to fill these small brew spaces–many skipping right to the middle breweries. Fittingly, their beers all get named simply by, you guessed it, numbers. ‘BBNo.’ offers more of the hoppy and Saison variety. If they have a cask offering of anything, I say go after it. We were lucky enough to tap the keg of their 11|05 Session IPA. We finished the visit off with 15|01 Black IPA, maybe the surprise style of the day. Try that too. 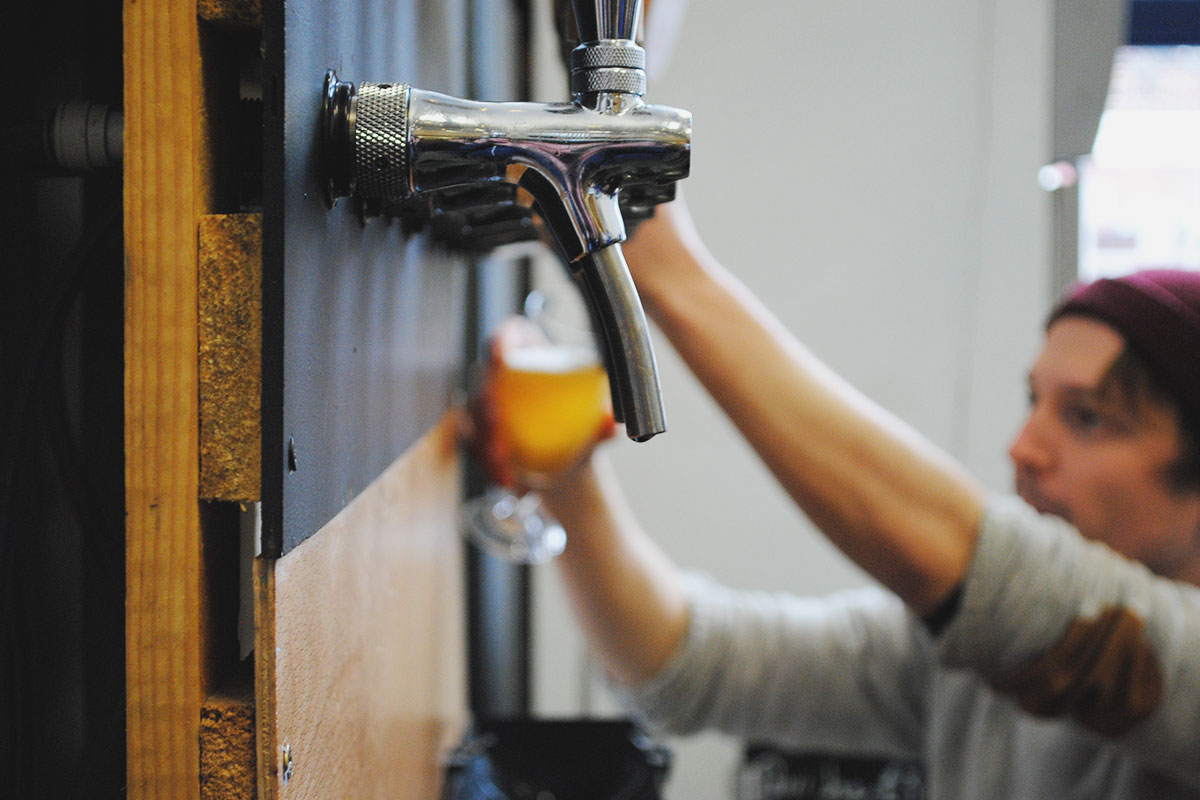 Whew, ok, stop no. 5. One of the smallest spaces seating-wise, but also one of the brightest is Anspach & Hobday. Here, you’ll find Partizan’s competitor for funkiest brew styles. When you see a smoked gose on the menu, you order it. And that’s what we did, with The Peated Gose. Personally I dug it’s complex flavor profile and competing notes. The Londoners that day were not as big of fans. Fair enough, there are plenty of other sours, pales, porters and Saisons dotting the draft list. They also had a great selection of bottled beers to take away, but you may not have the coordination to juggle any more vessels at this point. 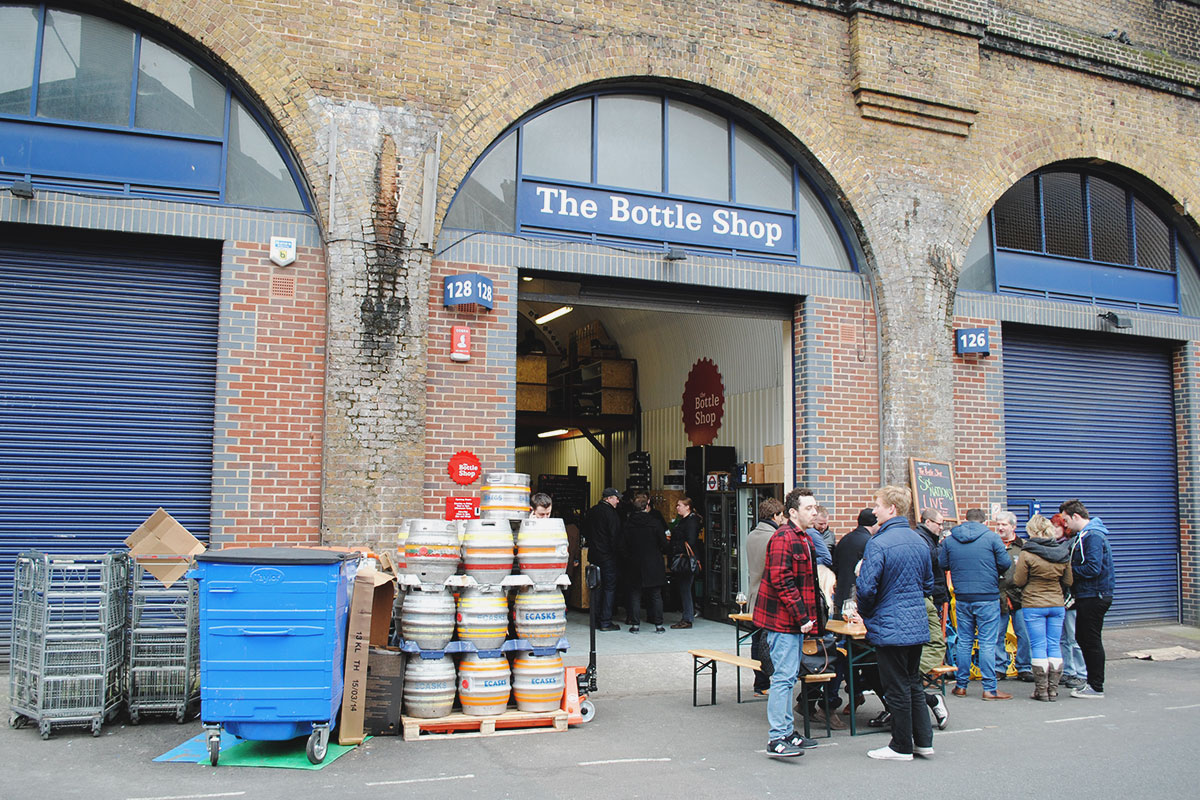 After leaving the last brewery, head next door to The Bottle Shop, even if you decide you don’t want to carry another beer home. Somewhat deceivingly named, this spot offers more on draft than in bottle it seemed. It also was a hangout for soccer match watching, being the only place on the ‘mile’ with a TV. And to be honest at this point, it’s hard to say even what we tried here. Memory gets foggy after 5 breweries and a mile walk. But hey, any final chance to grab a London craft pour is a valid opportunity in our book. From here, we dropped back through Borough Market in the city, grabbed a much needed bite to eat, and called it a day. Success.

When you finish up at The Bottle Shop and still have room for another pint, make your way to one more brewery on the crawl: Southwark Brewing Co. [7] We weren’t able to drop in. Instead, we made our way back to Borough Market to snag a few bottles from the beer shop Utobeer [8] before closing. We recommend.

Thanks to Londoners and resident craft beer experts Paul King & Kasia Patel for playing tour guides down the Beer Mile. 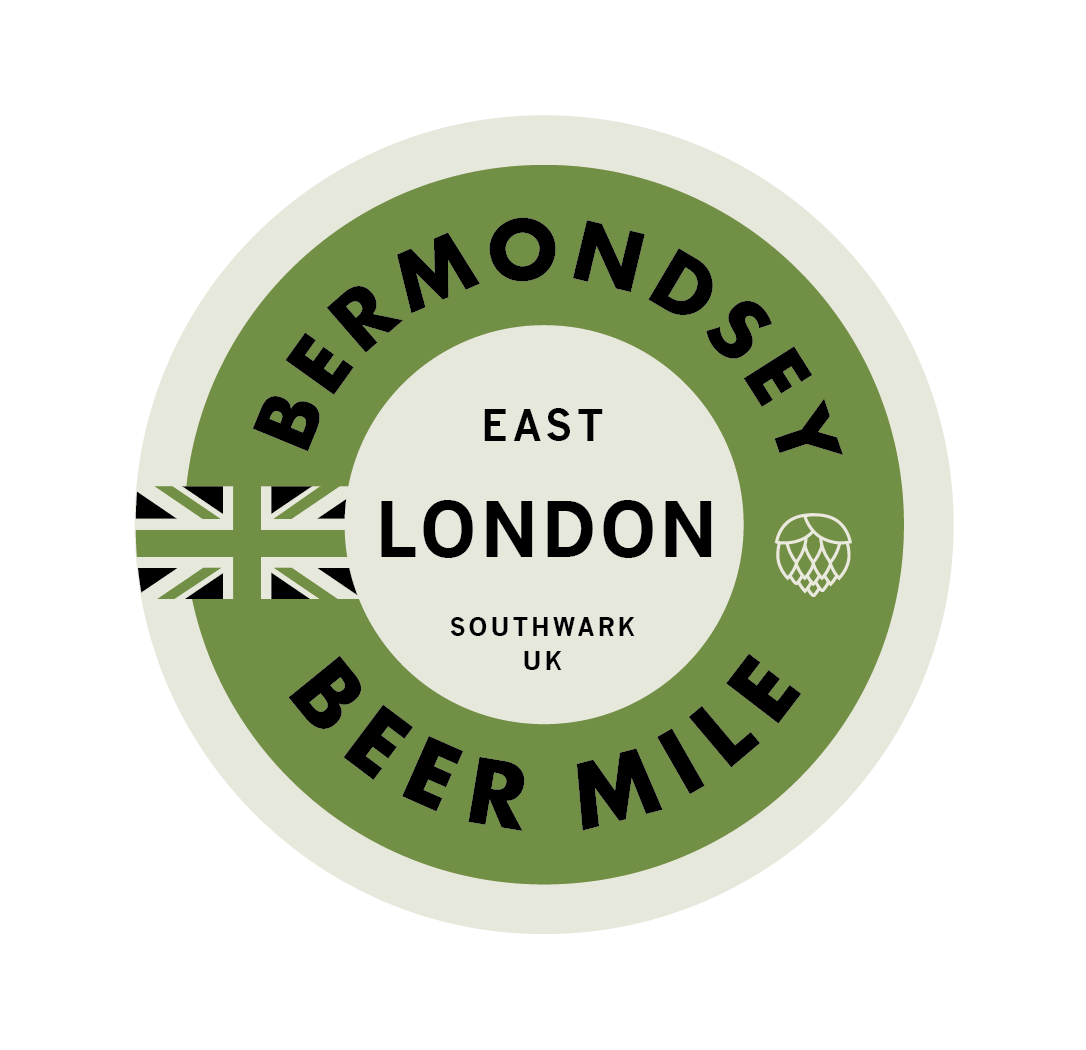