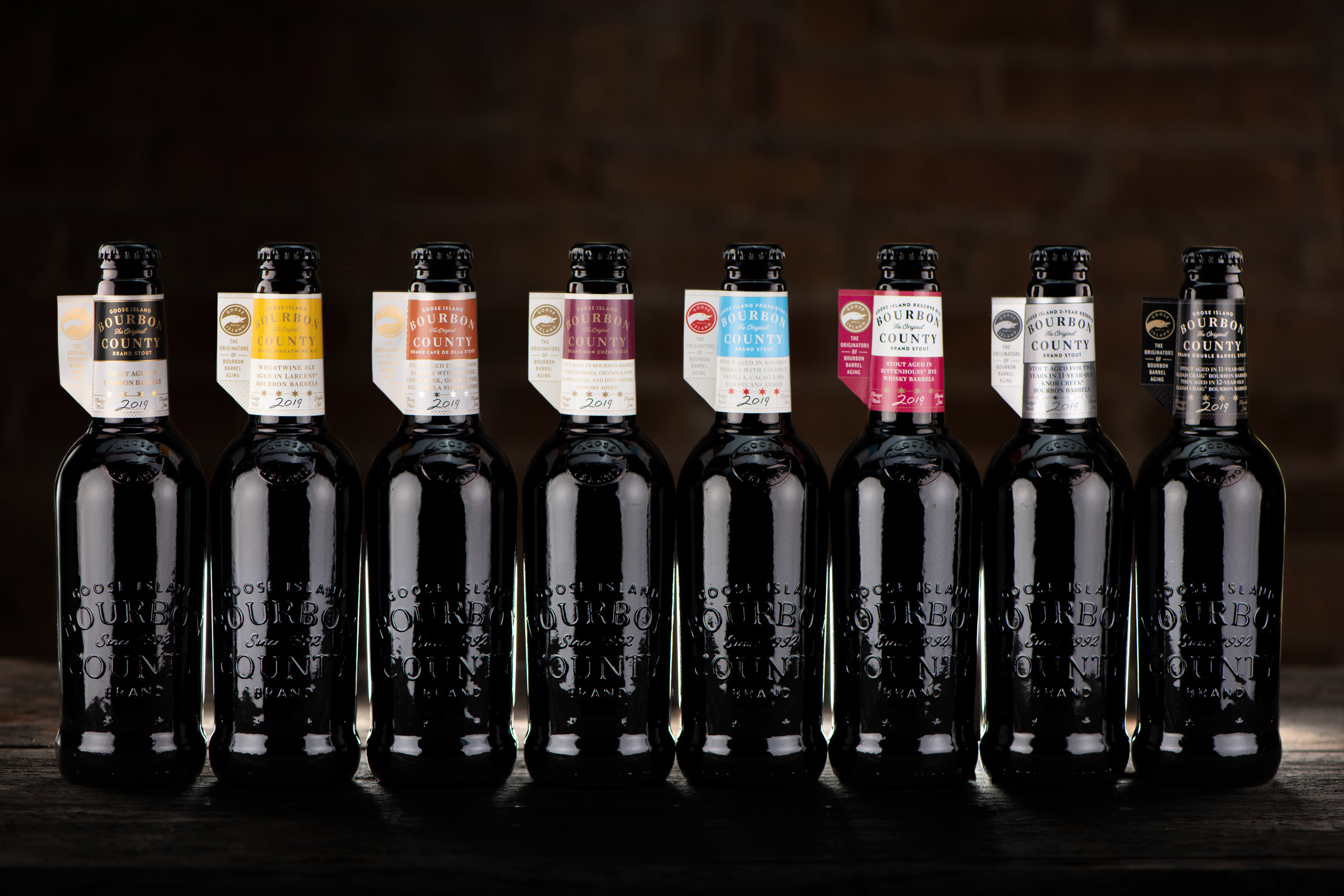 When Brewmaster Greg Hall was looking to brew something unique for Goose Island’s 1,000th batch, more than 20 years ago, he just needed inspiration. Then a chance encounter between Hall and Jim Beam’s Booker Noe led to Goose Island acquiring the barrels for what was to become the world’s first bourbon barrel-aged beer: Bourbon County Stout.

It’s safe to assume that neither of the two would have predicted the uber-loyal following, the annual Black Friday fervor, nor the wide-ranging lineup of variants, when they brewed that first batch of BCS. But today, it still stands as one of the most anticipated and widely lauded beers to release each year, and has truly set the standard for barrel-aged stouts, globally even.

And for 2019, the lineup is as unique as it has ever been, thanks to the creativity of several featured brewers’ recipes, and partnerships with distilleries such as Heaven Hill–which the brewery has said has allowed them to “release a more barrel-forward lineup of variants.”

Those eight variants that will release this year are:

In addition to the above lineup, Goose Island will release a limited edition box dubbed the ‘Vertical Collection’–inclusive of 2017, 2018, and 2019 Bourbon County Stout.

All of these variants will of course go on sale this Black Friday, November 29, 2019.

The following images and descriptions of this year’s lineup of BCS have been provided by Goose Island, in preview of the November release. We will be sure to follow up with our own thoughts on each beer once we are able to sample through them. 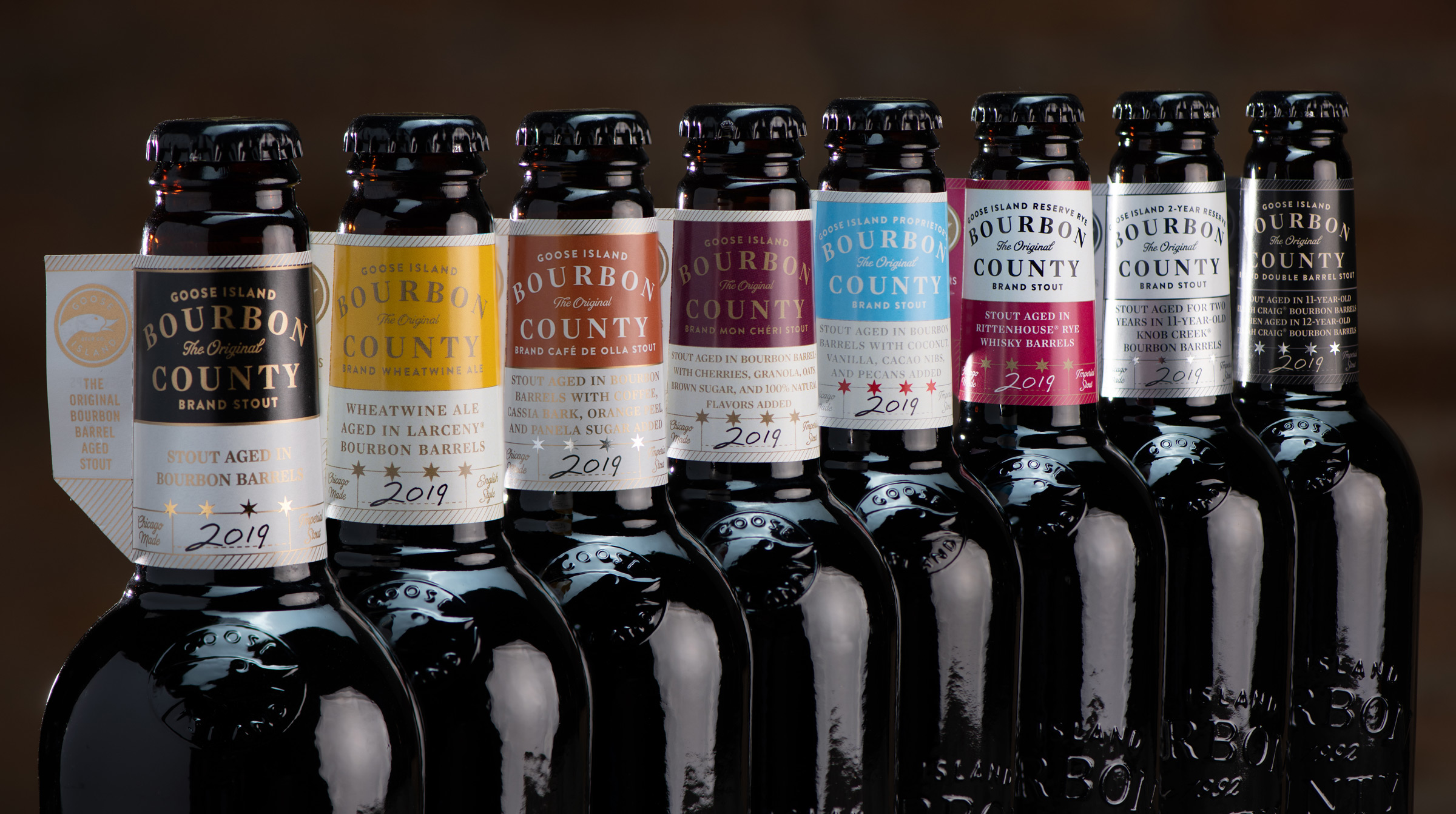 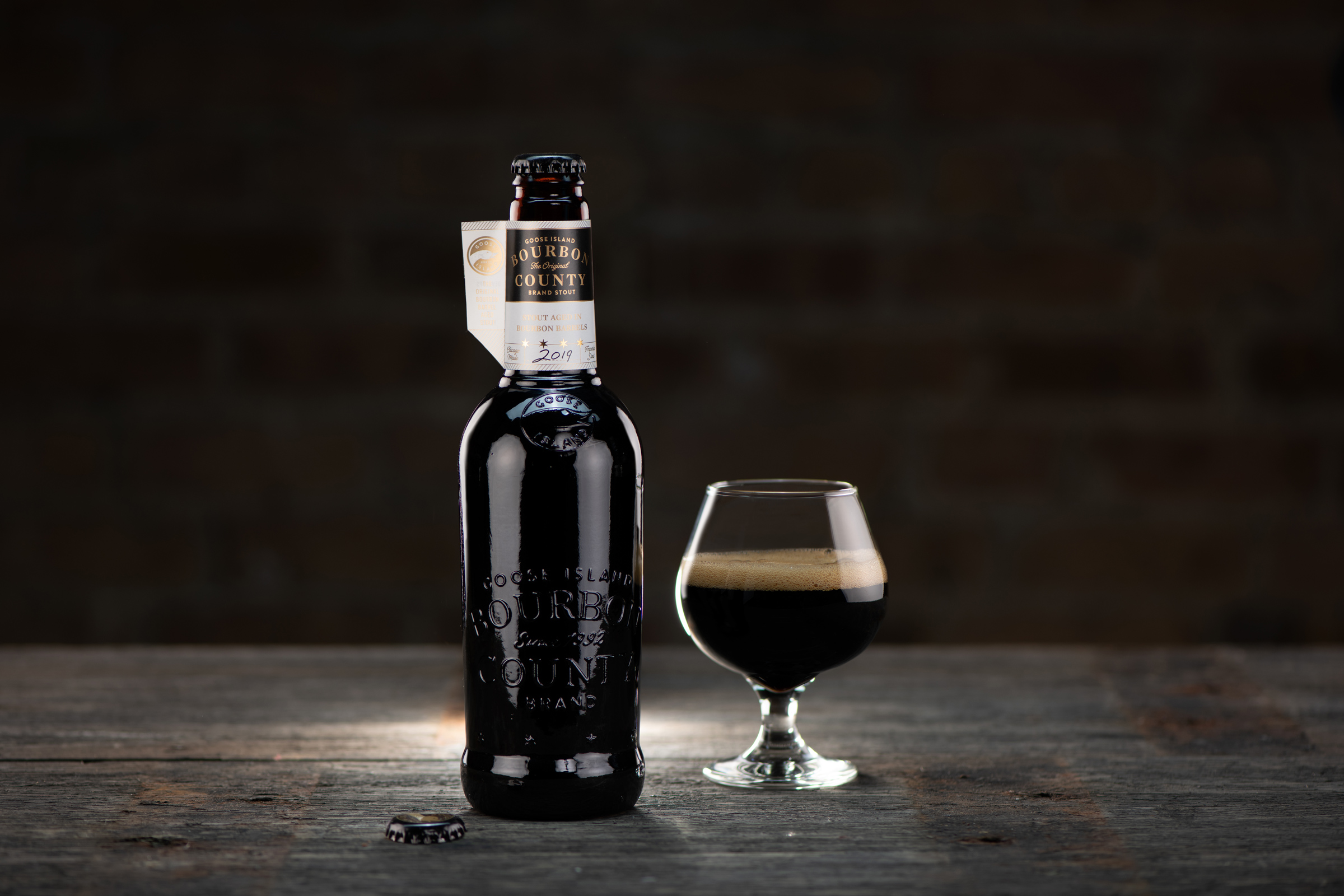 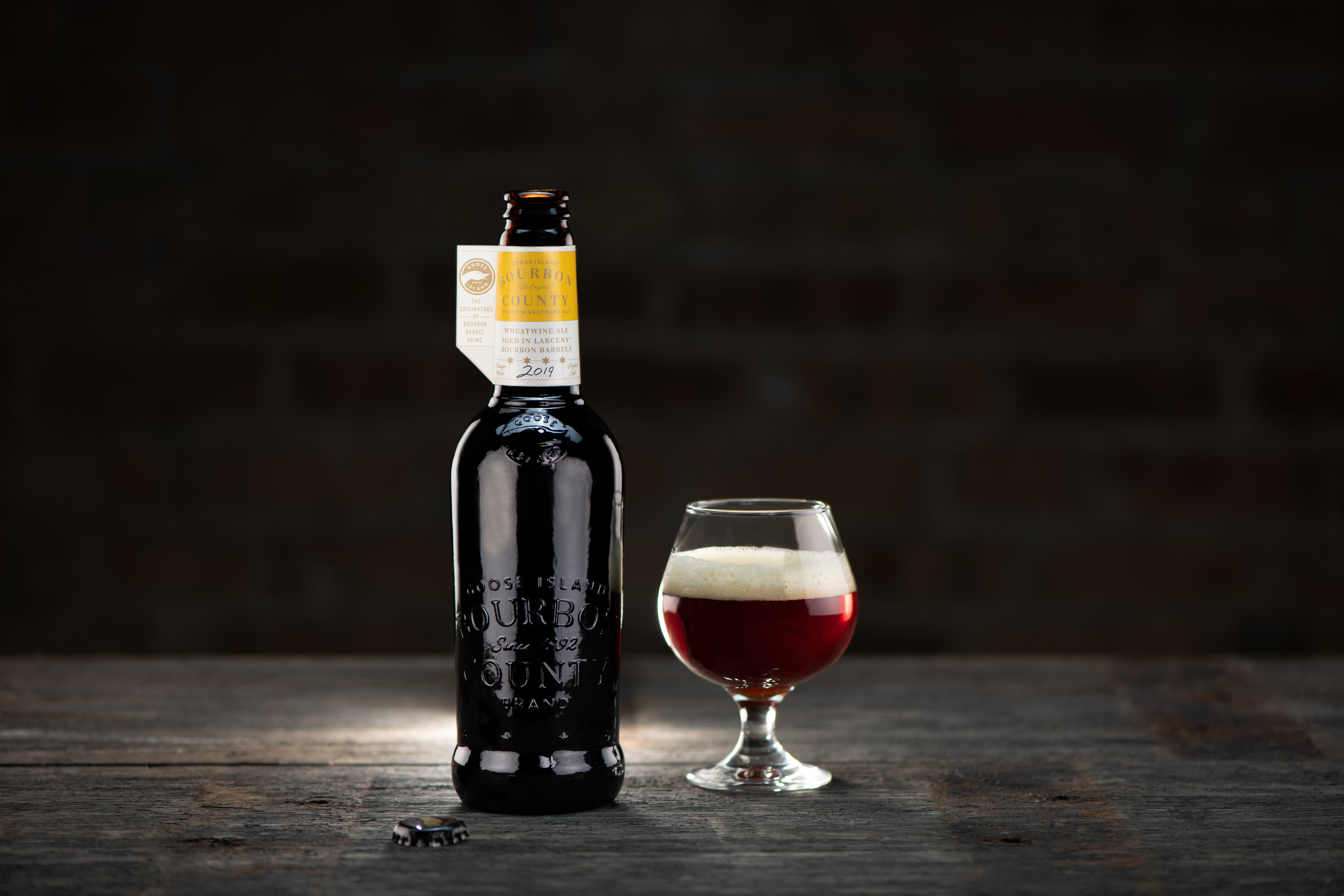 The 2018 Festival of Wood and Barrel-Aged Beers (FoBAB) award-winning variant is back for its second year, this year aged in Larceny wheated bourbon casks. The result is a softer flavor profile, full of caramel, vanilla, butterscotch and toffee flavors, all while carrying the nuances of Larceny bourbon barrels. 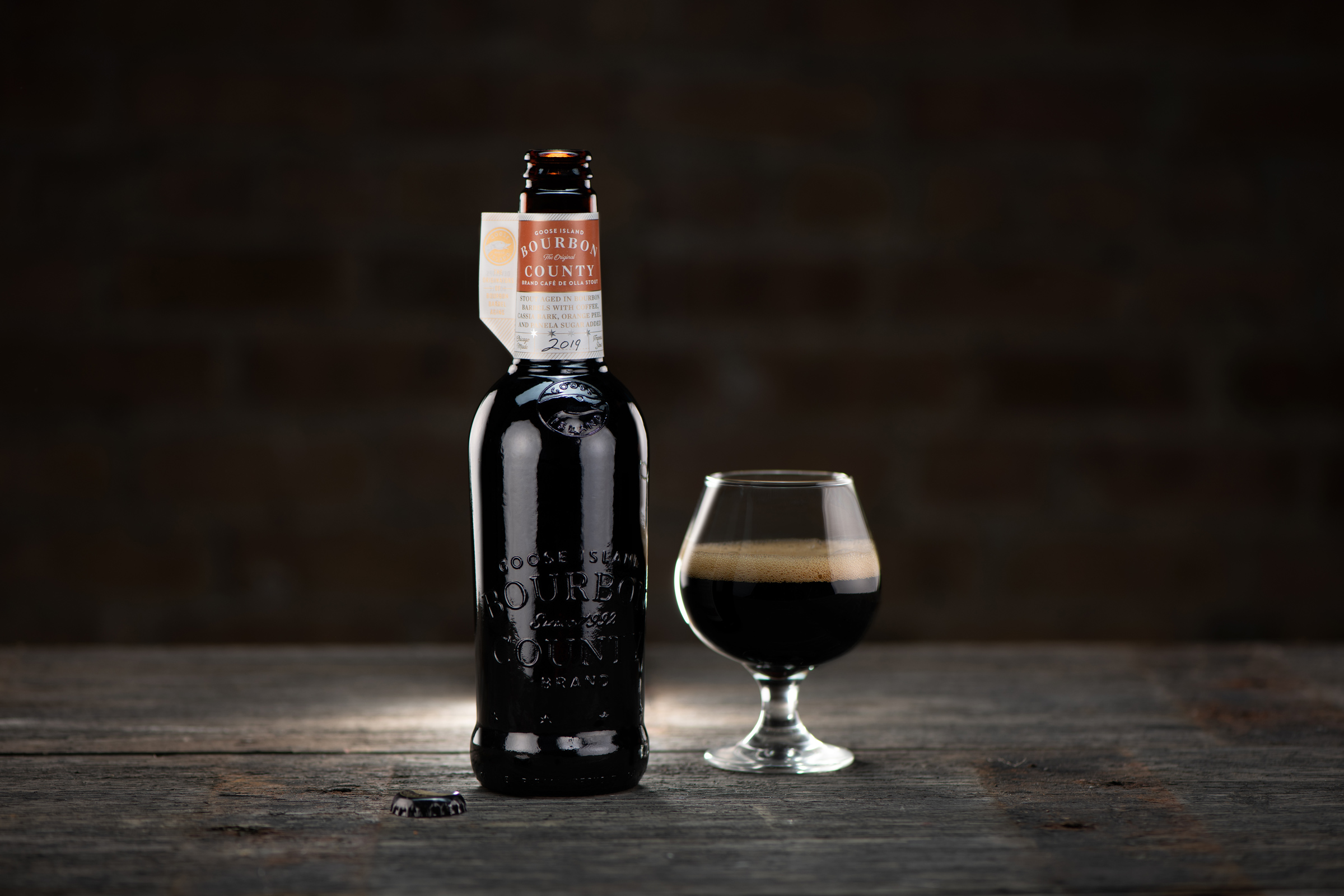 This variant is inspired by a traditional Latin infused coffee. This year we took Bourbon County, added Intelligentsia Coffee beans and cold brew. To round out the coffee flavor, cassia bark, orange peel, and panela sugar garnish the beverage resulting in an intriguingly complex flavor and aroma. 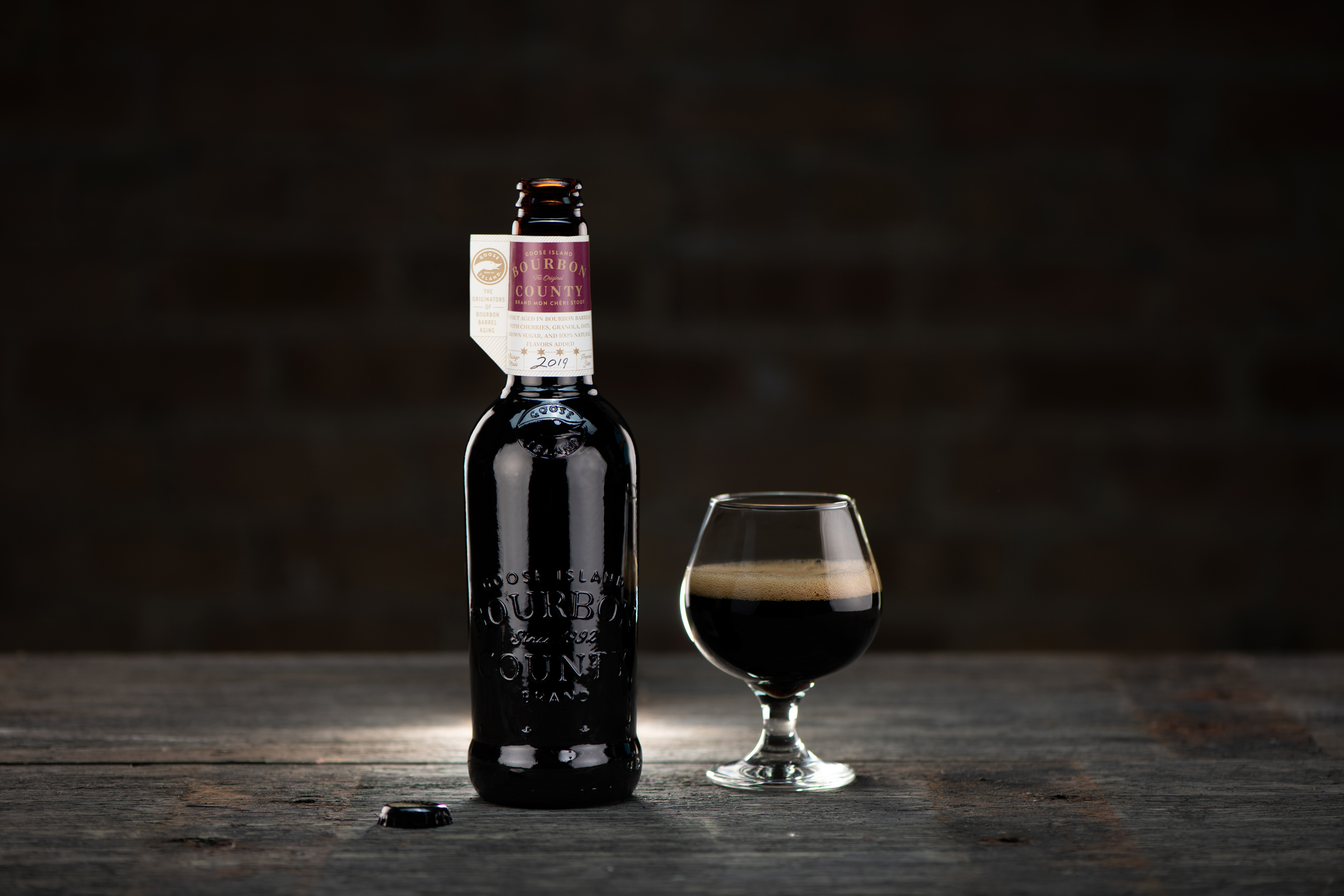 “Mon Chéri” means “my darling” in French and this recipe is a love letter from the brewer, Quinn, to his wife who loves cherries. Mon Chéri Stout is made with Balenton and Montmorency cherries, brewed with oats and a dash of brown sugar creating aromas of amaretto and almond. With one sip you’ll instantly get flavors of cherry cobbler, vanilla, and chocolate, followed by a silky, velvety finish. 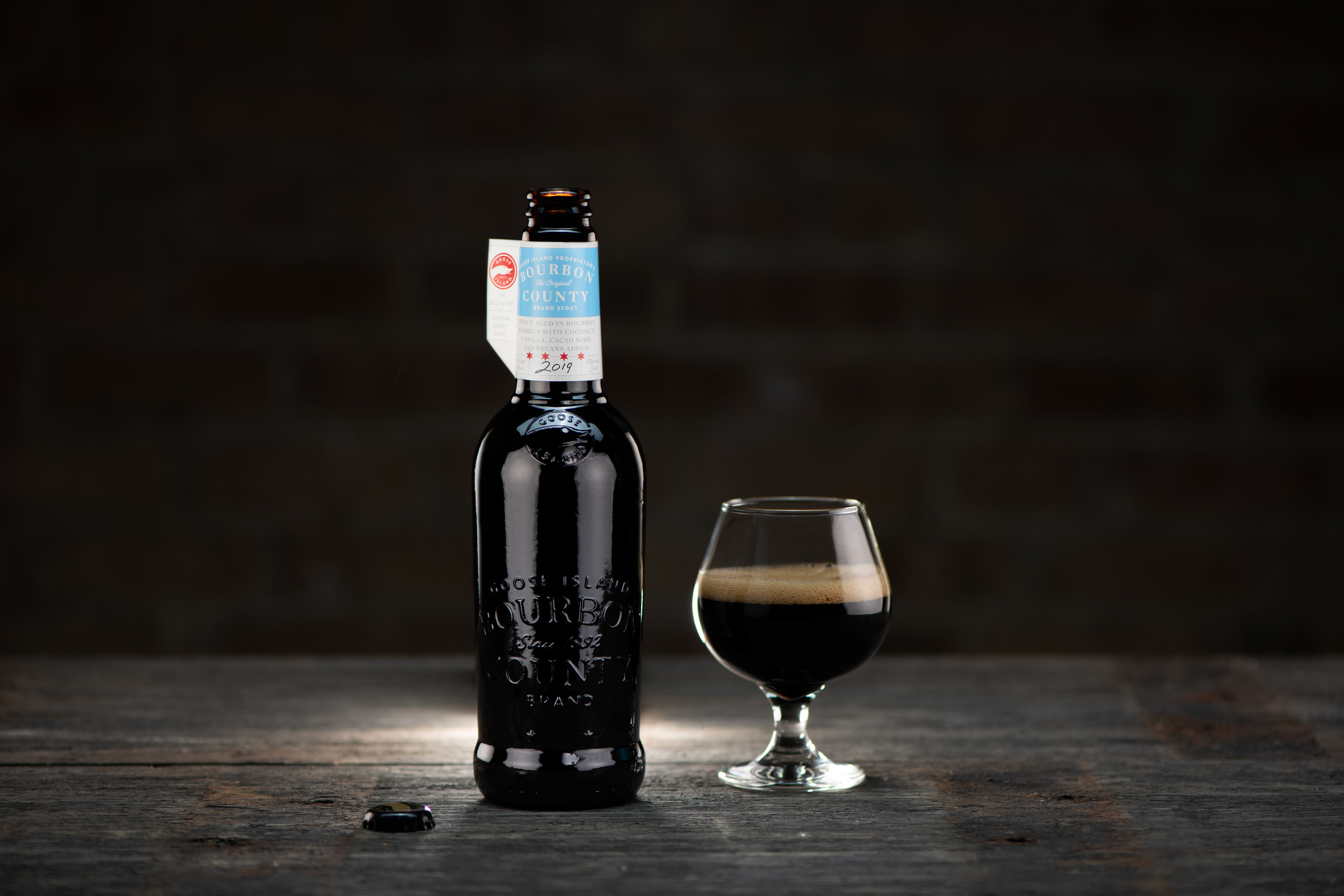 2019 Proprietor’s Bourbon County Stout is an homage to variants of years past fusing flavors of toasted pecans, coconut, cocoa and vanilla. Starting with an aroma of dark chocolate, toasted coconut and caramel, layered with intense notes of roasted pecans and bittersweet cocoa reminiscent of Tiramisu, ending with lingering notes of marshmallow. 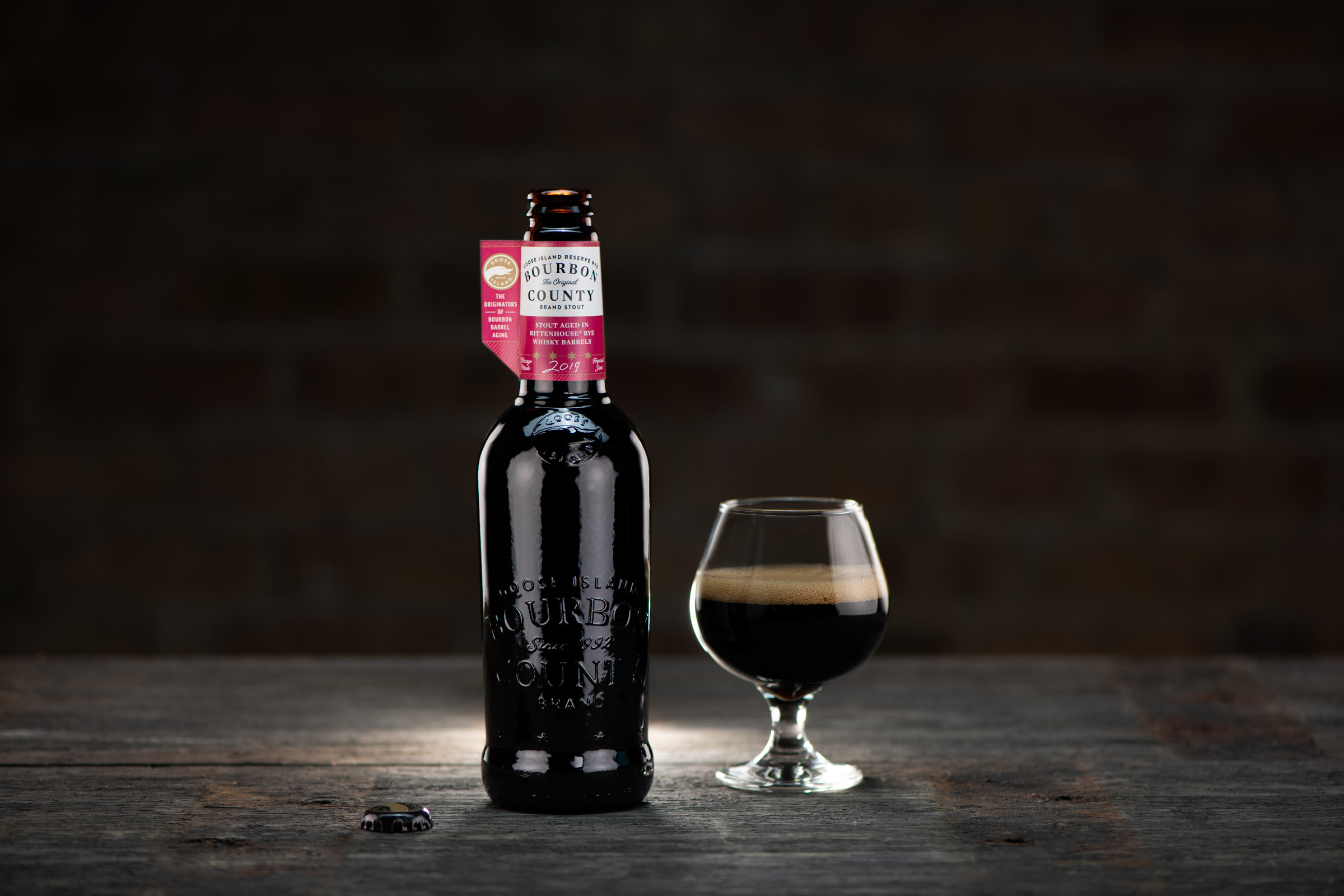 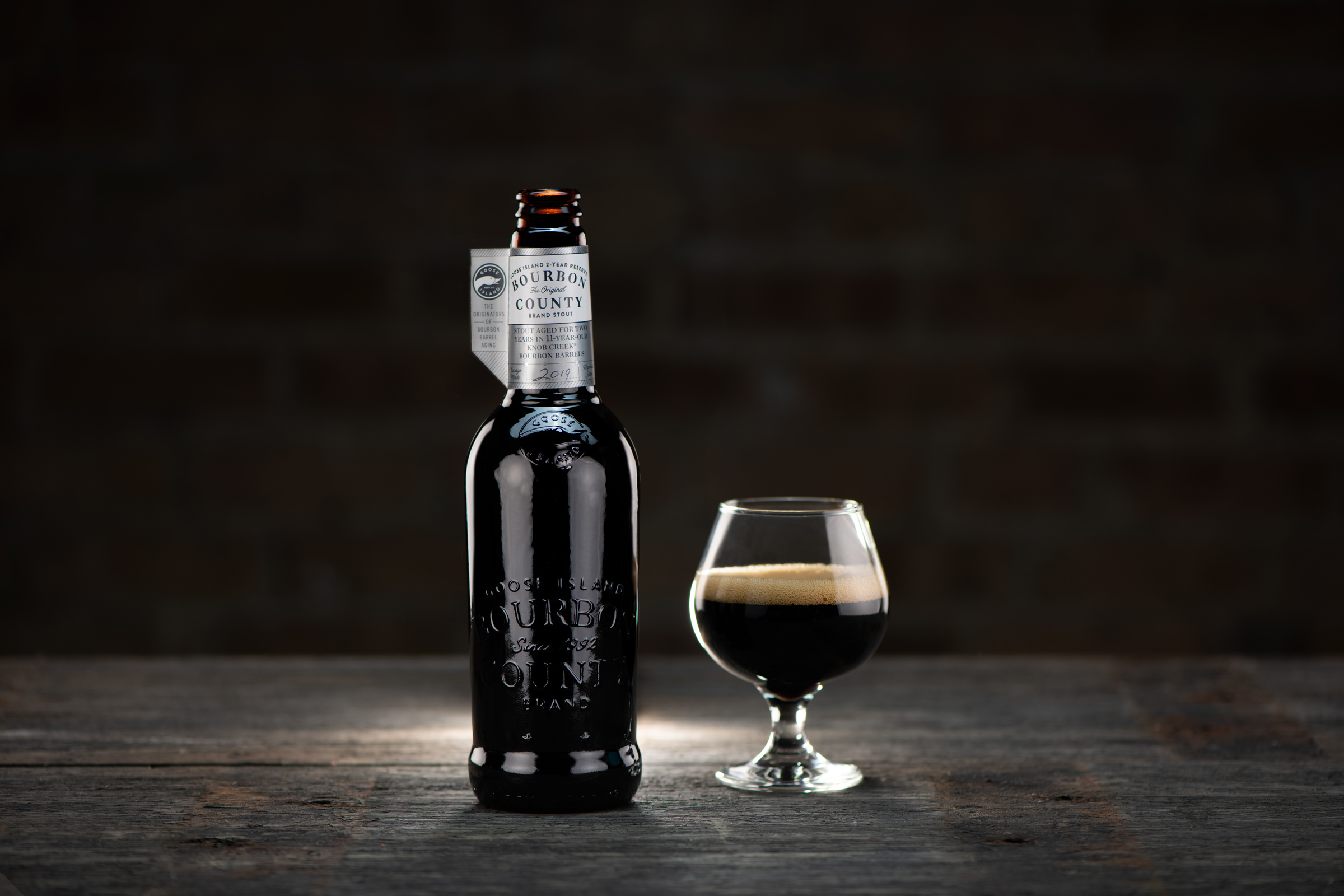 2-year Reserve Bourbon County Stout spent twice the amount of time as traditional BCS in 11-year-old Knob Creek barrels creating an oak-forward intensity accented by hazelnut and chocolate notes, all while allowing the signature flavor profile of the Knob Creek Bourbon to shine through. 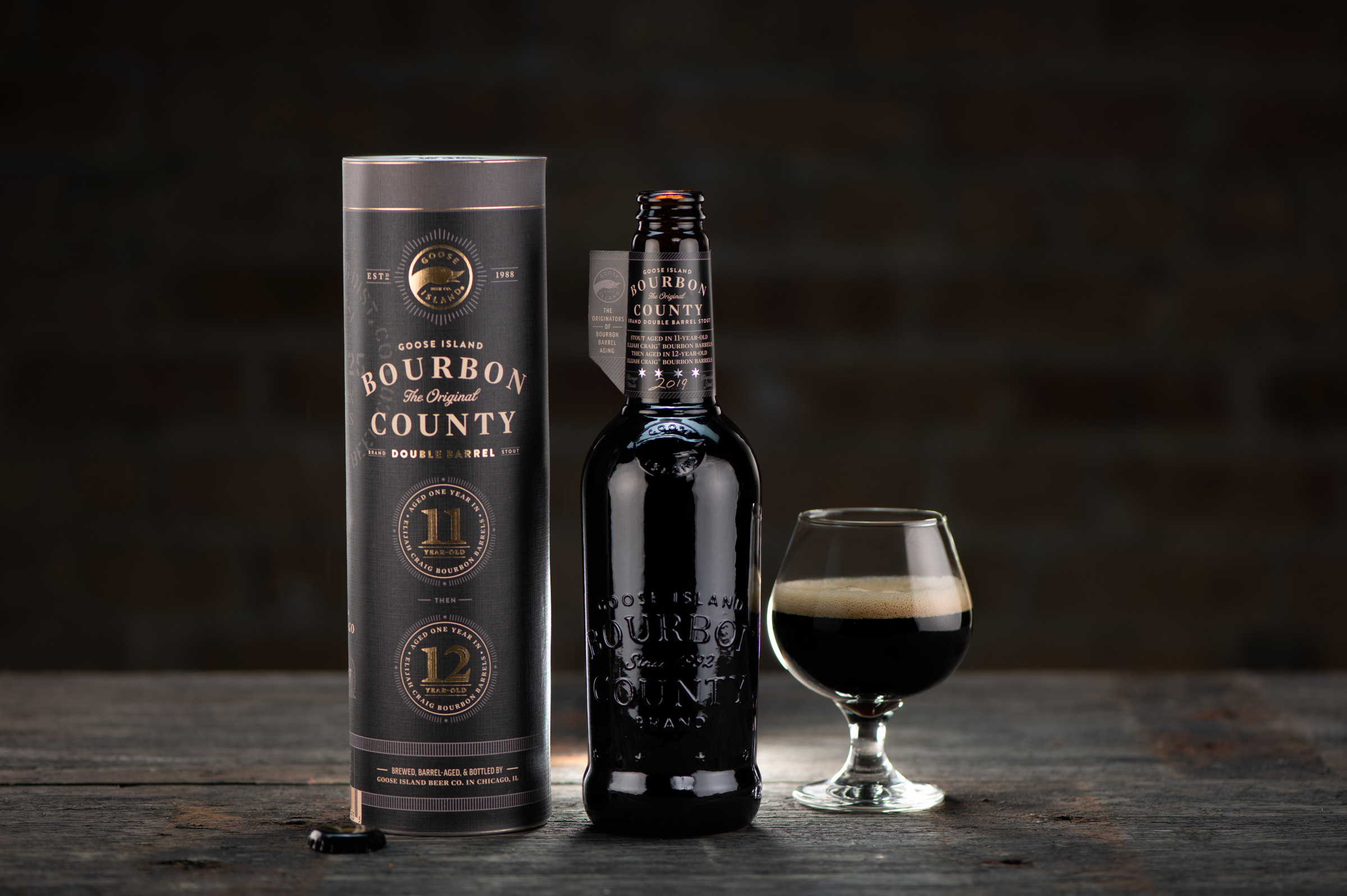 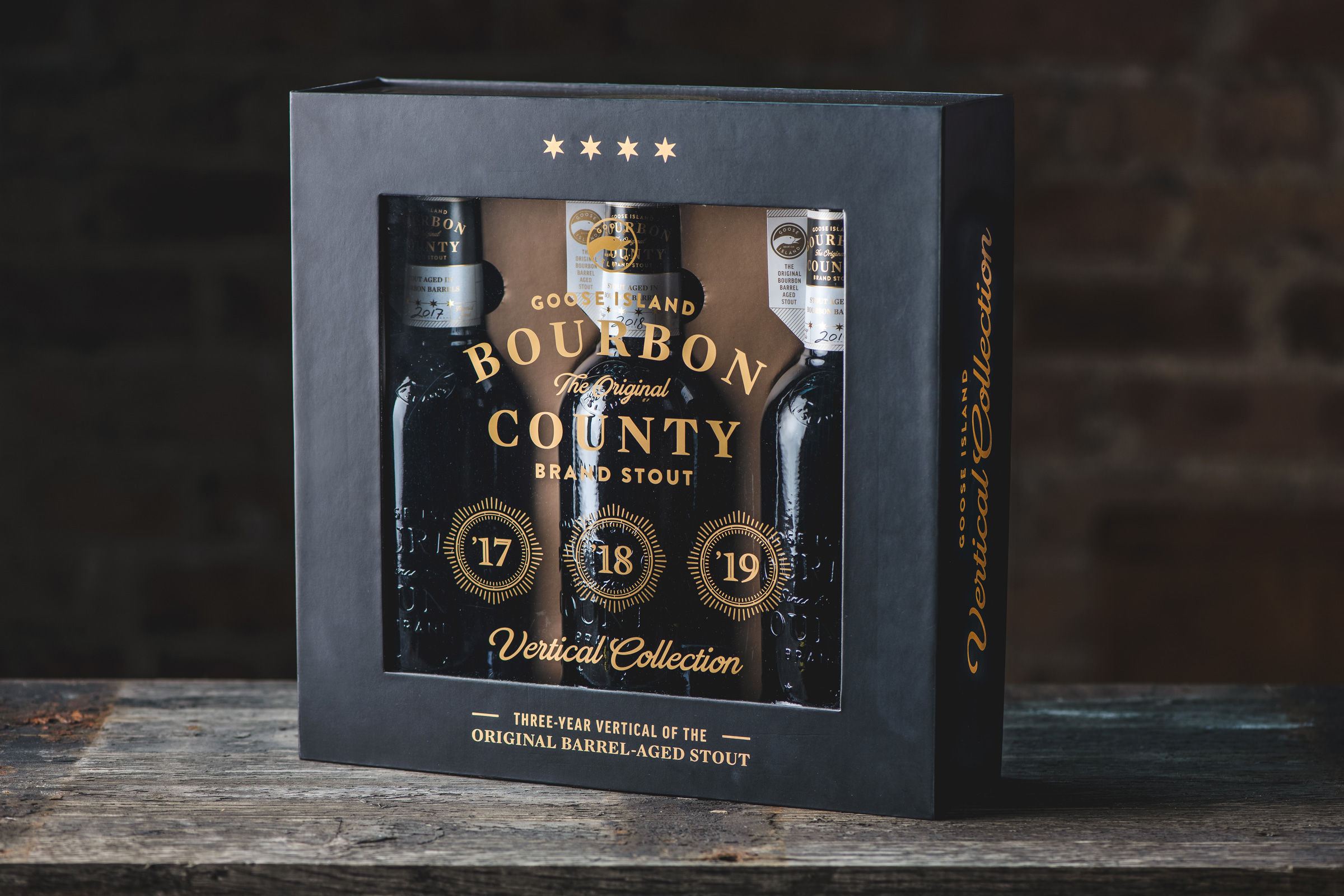 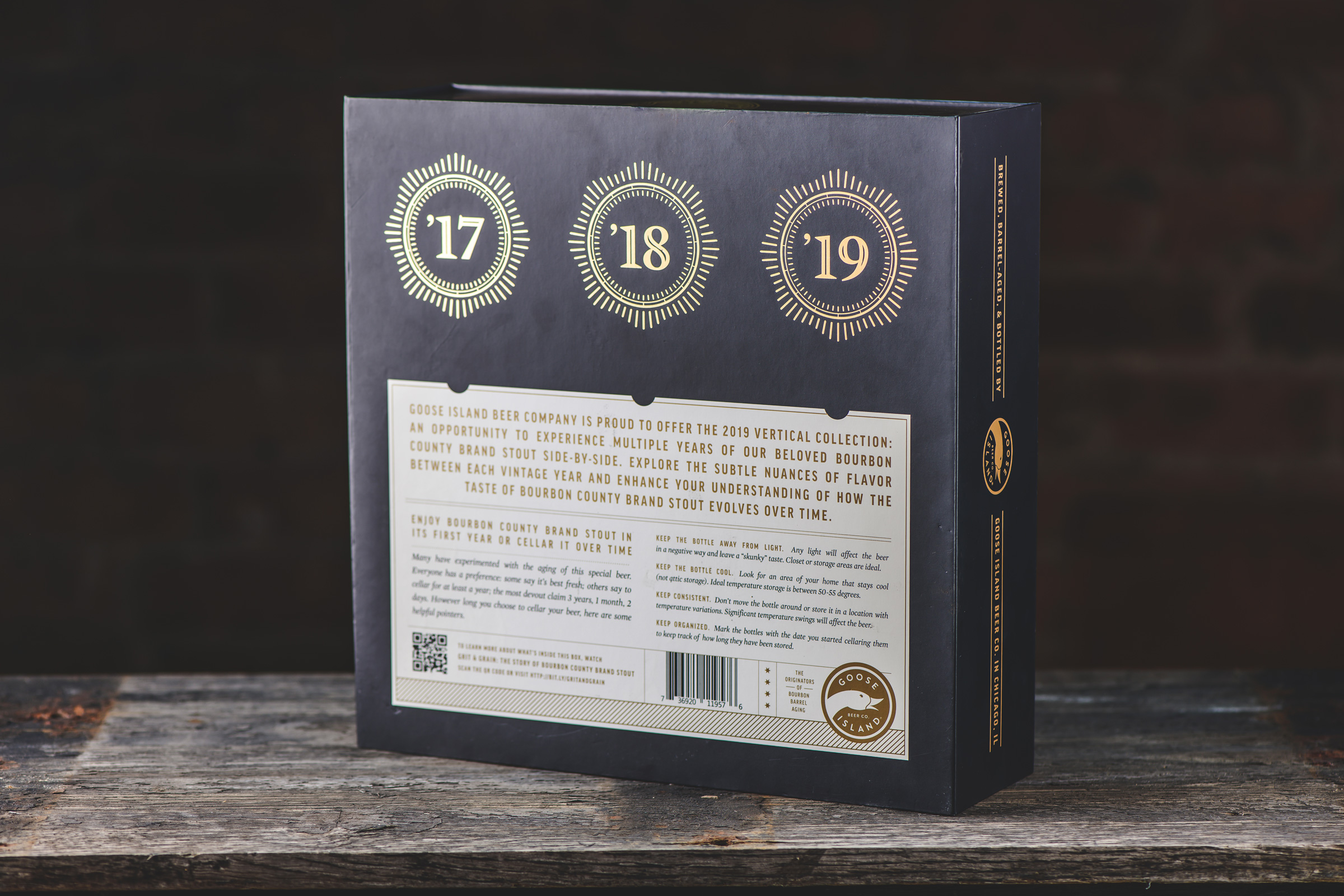 This year, Goose Island is proud to offer the Bourbon County Stout Vertical Collection inclusive of 2017, 2018, and 2019 BCS all in one box. They are giving BCS lovers the opportunity to experience multiple years of beloved Bourbon County Stout side-by-side. Explore every nuance of flavor between each vintage year and enhance your understanding of how the taste of BCS changes over time.