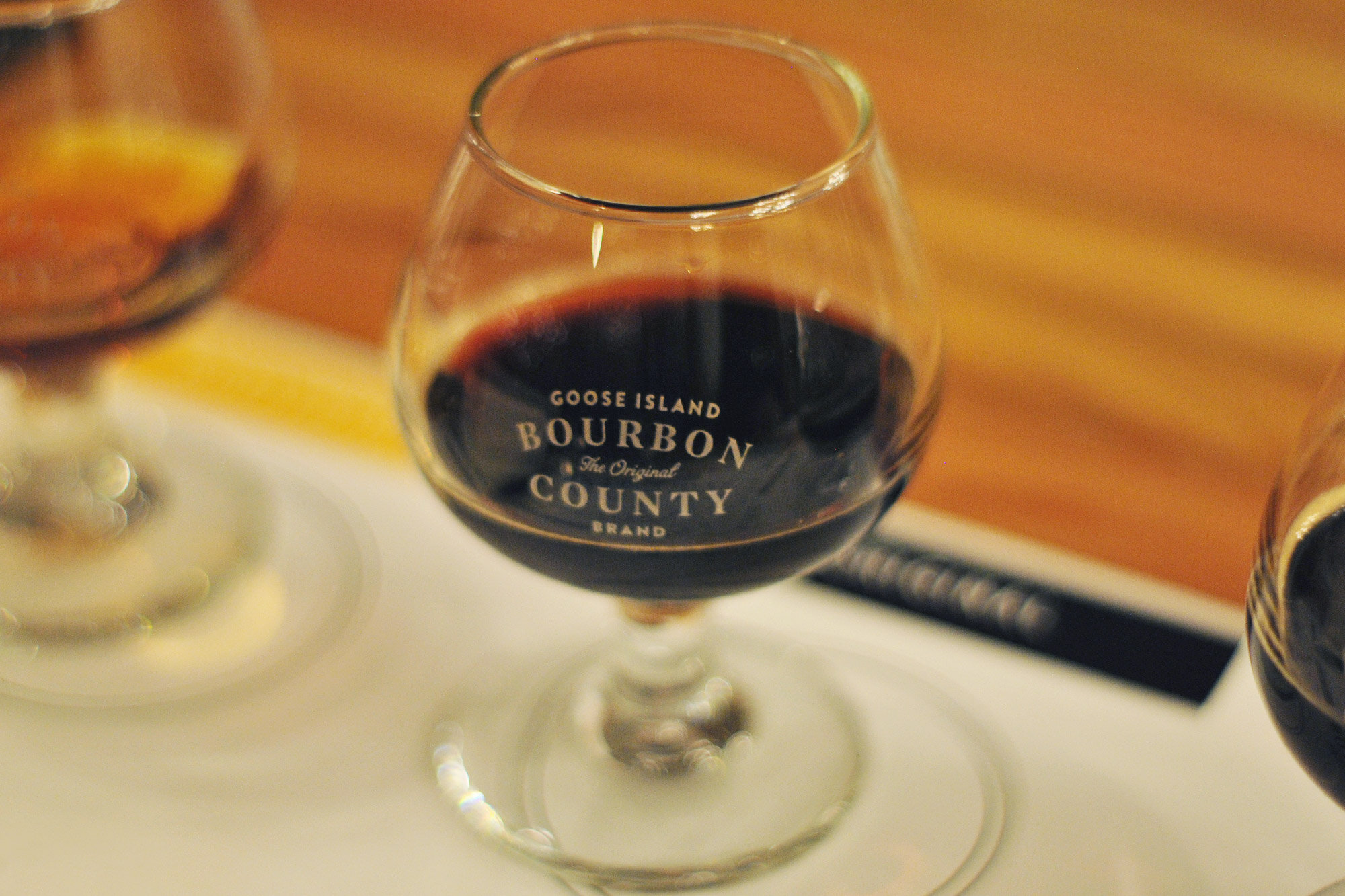 Bourbon County…is here again. And while previous years of the famed bourbon barrel-aged stout from Chicago’s biggest brewer have leaned on adjuncts to separate each variant from another, 2019’s lineup (for the most part) lets the barrels do the heavy lifting. And that, of course, is due in no small part to the barrels’ previous caretakers, Heaven Hill.

We recently attended a preview tasting of all eight versions of BCS–set to release on Black Friday, November 29, 2019–and can honestly say, this is possibly the strongest lineup to date. So strong in fact, that there really weren’t any polarizing ‘outliers’ (I’m looking at you, 2017 ‘Northwoods’)–making the following ranking a very difficult order to achieve. In fact, the ‘bottom’ four are practically interchangeable–whereas the top 4 were clear standouts in my notes.

Here are our rankings for 2019’s Bourbon County Stout…

As I just mentioned, it’s almost not fair to designate any of this year’s variants ‘last’. But, as rankings require, somebody had to fill the eighth slot, and unfortunately for me it’s Mon Chéri. I don’t typically get geeked to drink cherry stouts, personally, as I often find them overly sweet or medicinal even. But, this couldn’t have been further from that. It was loaded with cherry aroma, and drank more like a subtle cherry cobbler with some almond notes, without overpowering the barrel character. It’s decadent and smooth, and will win over fans of cherry and non-cherry-stouts alike.

This variant is inspired by a traditional Latin infused coffee, and is a complex beer no doubt; a bit of an intriguing oddball even. The coffee is unabashedly present (you could smell this beer from across the table), and it battles for your taste buds with citrus-orange flavors, as well as cinnamon spice. It gets the expected Intelligentsia Coffee treatment, by way of whole beans and cold brew, to provide the bitterness and acidity–and of course aroma–associated with this coffee style.

The Reserve Bourbon County Stout Series is intended to be an annual showcase of the nuances of a premium single-source bourbon. Previously, Knob Creek and Elijah Craig bourbon has been showcased, and this year it’s Rittenhouse Rye. And not only does this BCS clearly pull characteristics of having sat in rye barrels, but it also gets an extra smokiness, thanks to a higher-charred barrel type used for the Rittenhouse Rye. There is a distinct dark fruit and spice tinge up front, as you’d expect–but also an earthiness to the profile. It reminded me of a dark cola, with the way it plays on the tongue.

Alright, I lied. If there is any ‘outlier’ this year, it’s Wheatwine. And that’s merely because it’s hard to consider this variant on the same plane as the stouts. Rather, it’s a much softer and sweeter ale, immediately drawing comparisons to butterscotch and caramel. In fact, it’s deceptively easy drinking, at 15.3%, well above all most of the stouts this year. And of course, this variant carries some pressure to perform, as last year’s version won at the Festival of Wood and Barrel-Aged Beers (FoBAB). Twenty-nineteen’s is aged in Larceny wheated bourbon casks, and ditches any specialty malt additions to the grain bill, opting rather for a higher malted wheat recipe. The result is…a wonderful contrast to its BCS stout siblings.

I’ll likely ruffle the feathers of my fellow tasting panelists with my lower ranking of this variant. 2-year Reserve Bourbon County Stout was the version that I’d heard most folks rumbling about over the course of the evening. And while it is a fantastic interpretation of the 11-year old Knob Creek bourbon barrels it called home for 24 months, it simply wasn’t as good, in my opinion, as the three ahead of it on the list. Spending twice the amount of time as traditional BCS in barrels very clearly plays with the profile of the stout– creating an oak-forward, nutty, fudgy, cookie-like bruiser, that even gave off subtle hints of black Licorice. Who dropped those Good & Plentys in there??

I mean, c’mon–this is really what we come for each year. ‘Original’ is undeniably…original, in the way that no other BBA stout can be almost. It’s so distinct, and does the trick all on its own–no extra barrel time or adjunct needed. This year’s was aged in a mix of Heaven Hill, Buffalo Trace and Wild Turkey barrels, yielding a noticeably bigger bodied stout, decadent even. It’s bold, chocolatey and tobacco-y. It’s almost reminiscent of 2018 Prop, but not quite so brownie-esque.

This is definitely the beer that will get the beer nerds buzzing. Upon my first sip, I gasped an audible, “Wow.” And did the same on my second…and third sip… There is a prominent coconut presence thanks to both toasted and raw inclusions, as well as a deft addition of pecan, and it’s finished off with a hefty dose of vanilla. As R&D Manager Mike Siegel described it, this year’s Prop is an “all-star team of adjuncts.” Many dessert-forward stouts get described this way, but it really is like drinking a Mounds Bar.

When Goose Island first experimented with the ‘double barrel’ aging of their BCS, they admittedly did not know what to expect with the result. They’d shared the outcome as draft-only releases in Chicago in 2017 and 2018. For their third year of this experiment, Double Barrel is seeing its way into bottles for the first time, and we all are thankful. For me, this was the head-and-shoulders-above-the-rest standout. The beer is a result of the base stout aging one year in 11-year-old Elijah Craig barrels, then transferring to age an additional year in [Whiskey of the Year] award-winning 12-year-old Elijah Craig barrels. And the patience is certainly rewarded. It’s a rich, woody, dense fudge brownie of a stout. This is a fantastic interpretation of what BCS is meant to be–pushed to its limits, and only gathering flavor from barrels along the way. It’s a bruiser, only according to its ABV, because you would never guess this mellow drinker clocks in at 18%. I went back for additional sips of this one more often than any of its peers. It’s so good that…you will likely have a very hard time finding it in retail, because (sort of like Rare), it will be released in very low quantities. But, I wish you luck, because it’s worth the hunt. 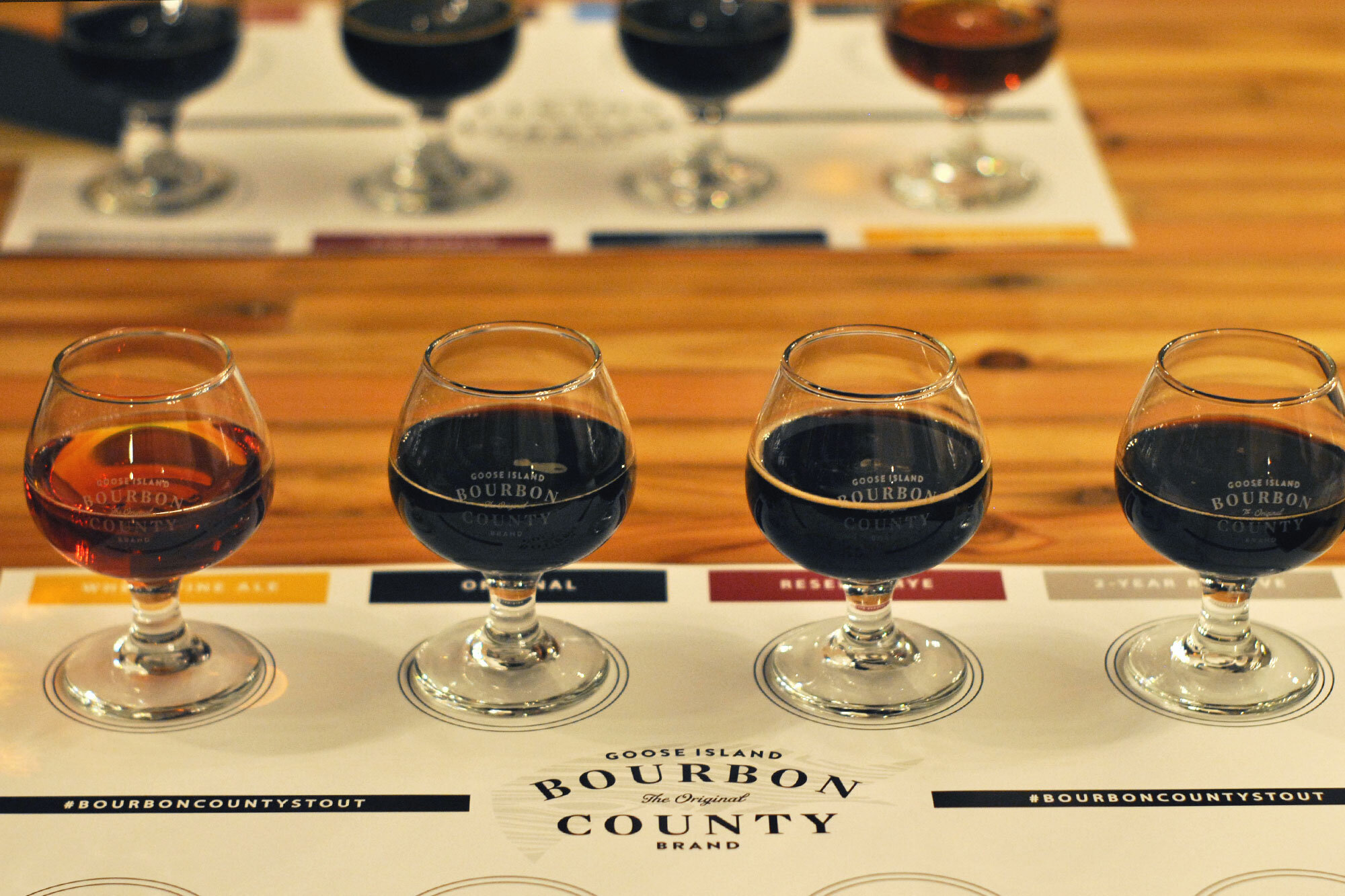 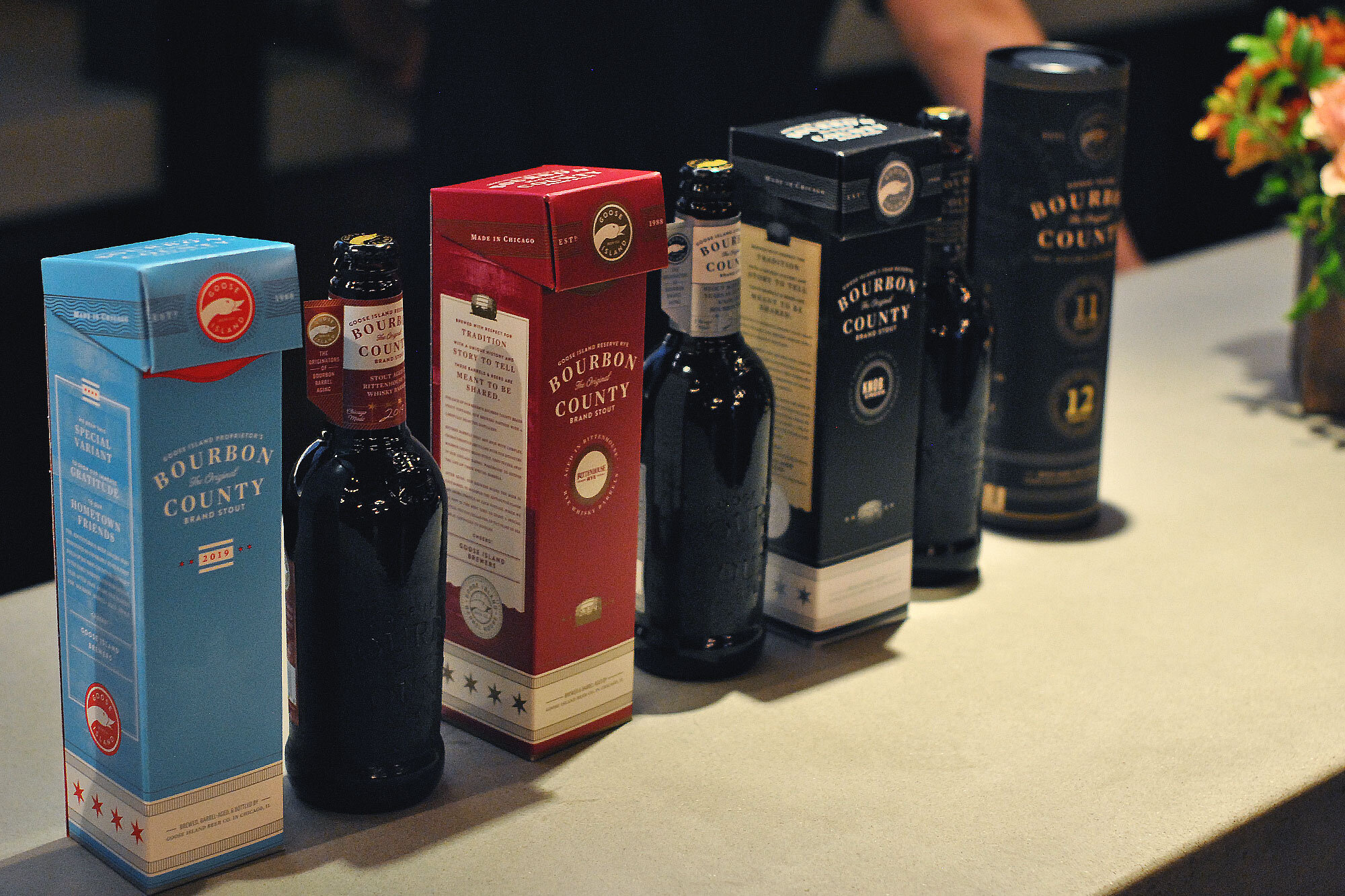 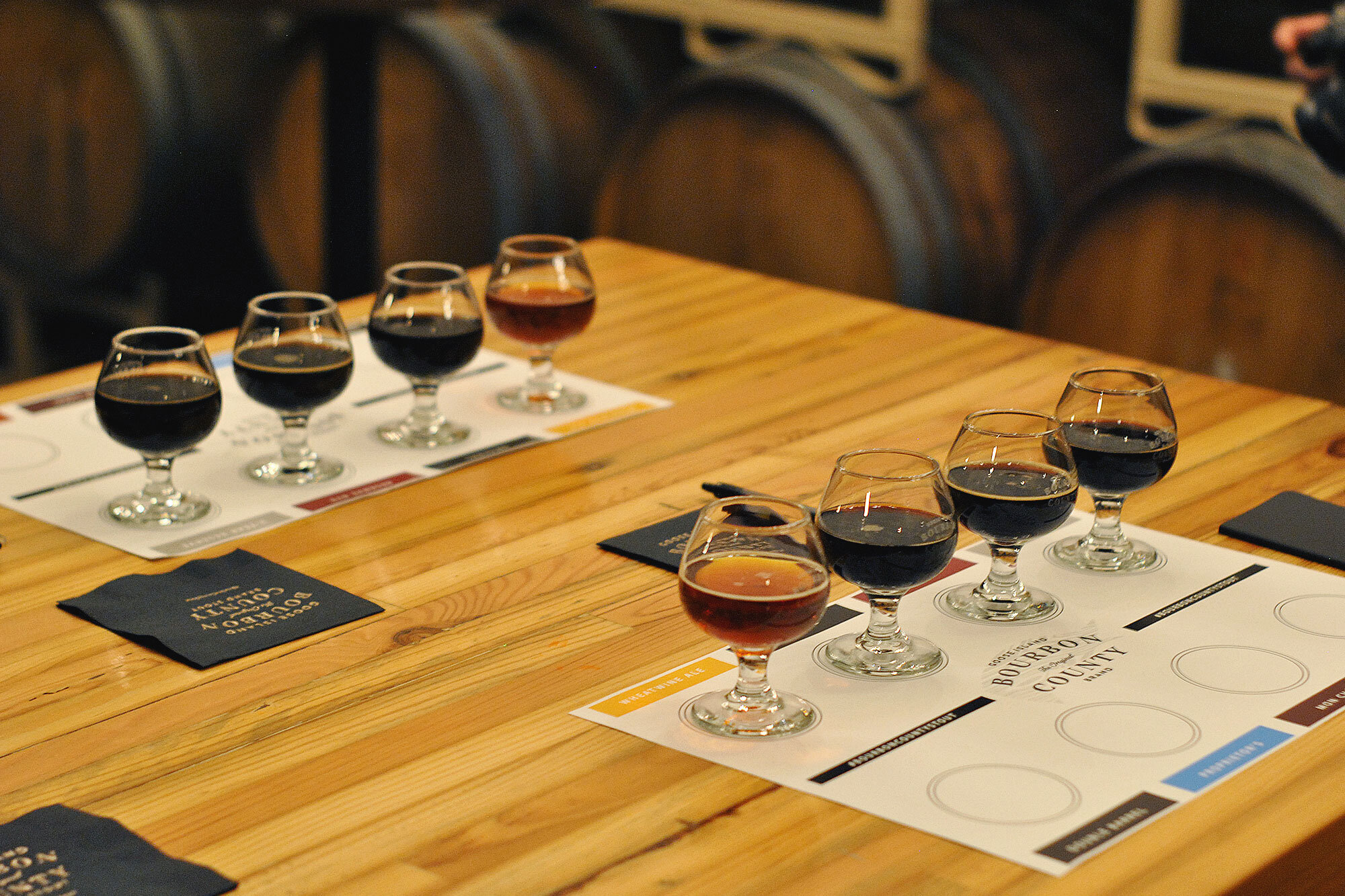 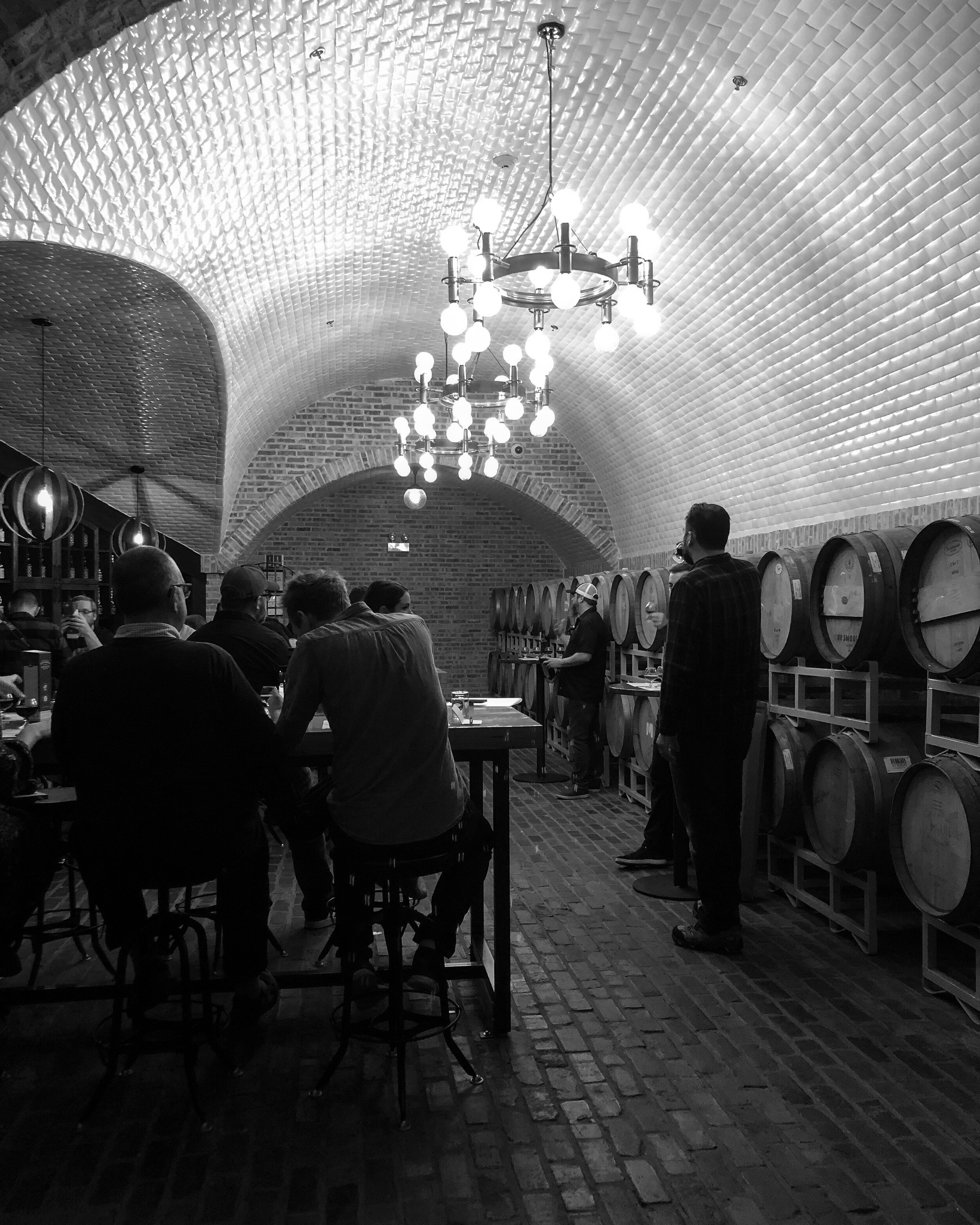 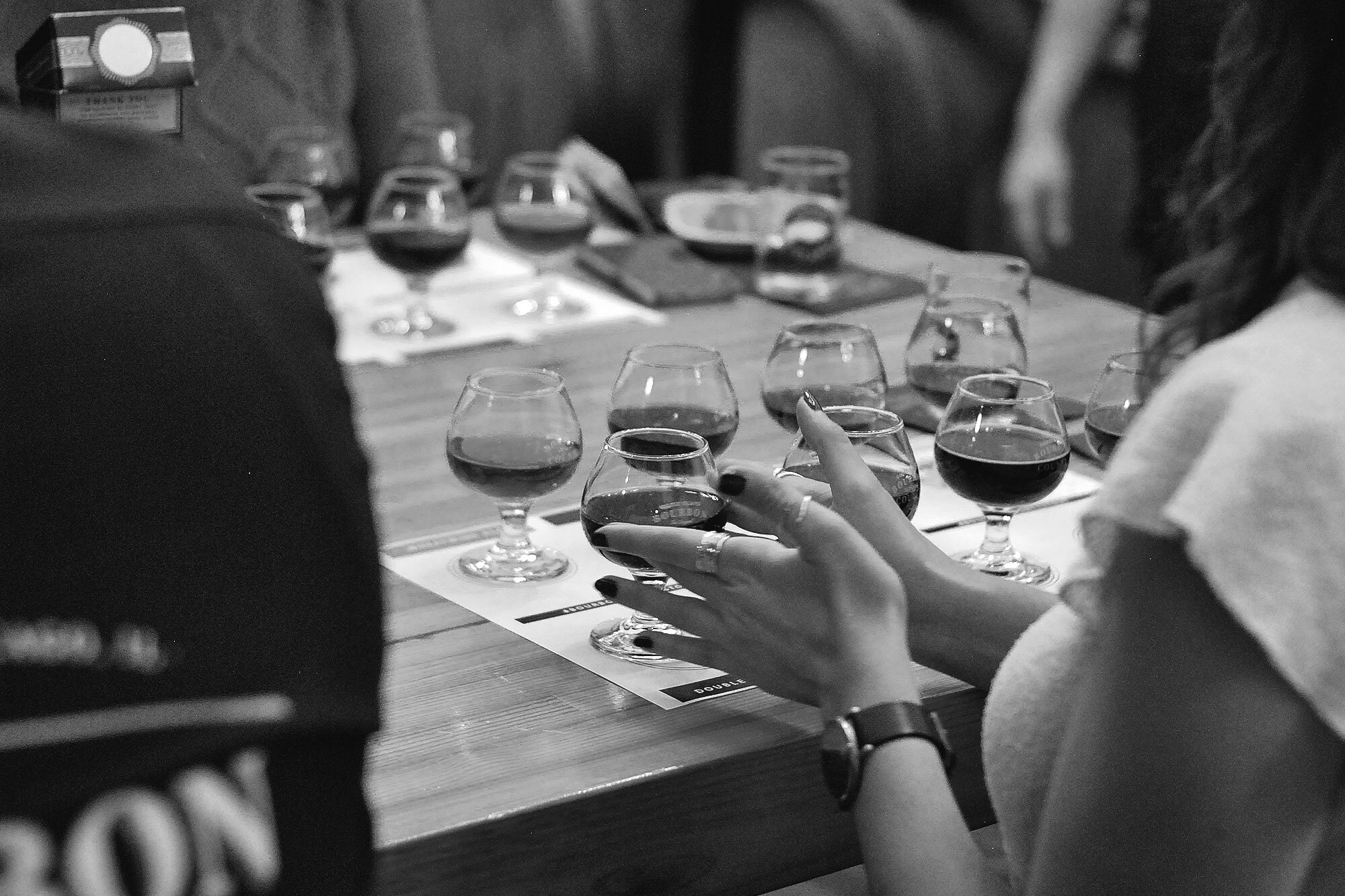 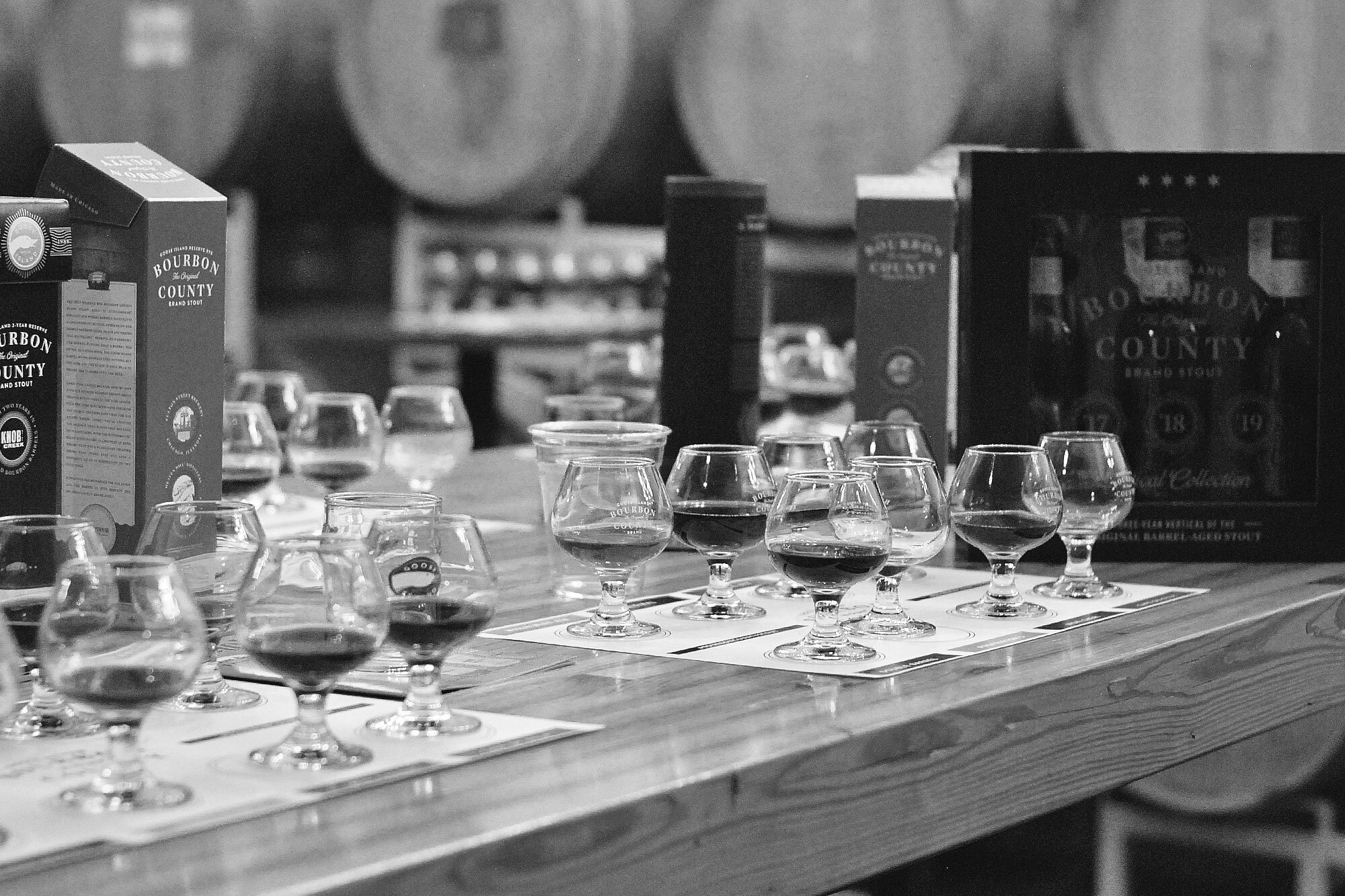 Thank you to Goose Island for giving us a sneak peak at this year’s 2019 lineup. Look for Goose Island’s Bourbon County Brand Stout on its typical Black Friday Release, & for those lucky enough to secure a lottery spot, at this year’s ‘Prop Day‘.