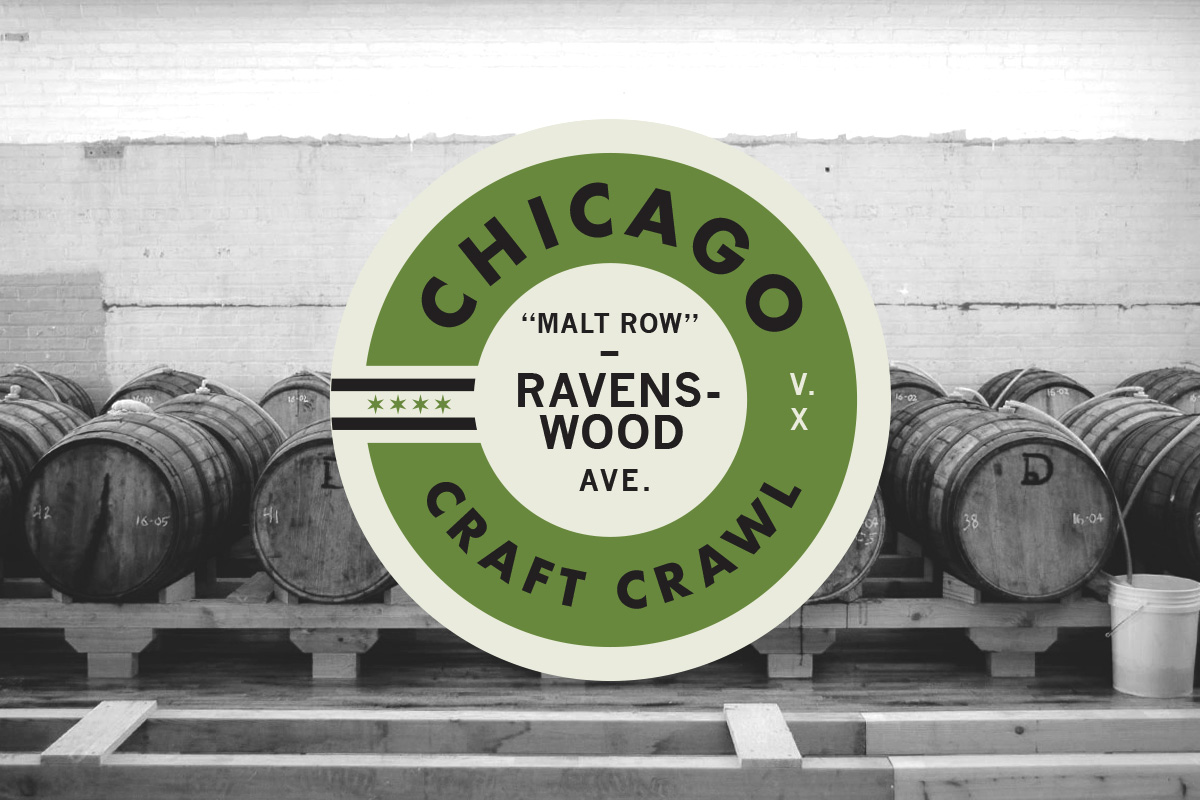 Our 10th Chicago Craft Crawl keeps us on the Northside as we tour possibly our most traversed avenue for craft beer in all of the city: Ravenswood Avenue, recently dubbed “Malt Row” for obvious reasons. While there are some great spots outside this stretch, we’ll focus on the area from Addison St. in the south to Foster Ave. in the north.

The Ravenswood Corridor and surrounding area is home to some of Chicago’s best and most diverse craft beer options. Once a turn-of-the-century hub for industry, this stretch of road is now a mosaic of creative businesses and artisans intertwined into a uniquely residential backdrop. With a bevy of breweries (and a renowned distillery) planting their roots in the Ravenswood Corridor, it truly has become Chicago’s Malt Row. Count some of the accolades of these neighbors – ’No. 5 Best New Brewery’ by USA Today [Dovetail], ’First Michelin-Starred Brewpub’ [Band of Bohemia], ’Best New Brewery 2013’ by Chicago Magazine [Begyle Brewing Co.], ‘US Micro Whisky of the Year Runner-Up 2017’ by Jim Murray’s Whisky Bible [KOVAL Distillery] – it’s easy to see why spending a day wandering the corridor would be time well spent. And while each brew, space and story is different, we’ve found one thing in common with all of the folks up and down Ravenswood Avenue: relentlessly welcoming hospitality.

Below we take a look at the wealth of options on and near the avenue, and mark the official participants of Malt Row with an asterisk. So set aside a Saturday or Sunday, and get started on our Chicago Craft Crawl v. X. Cheers! 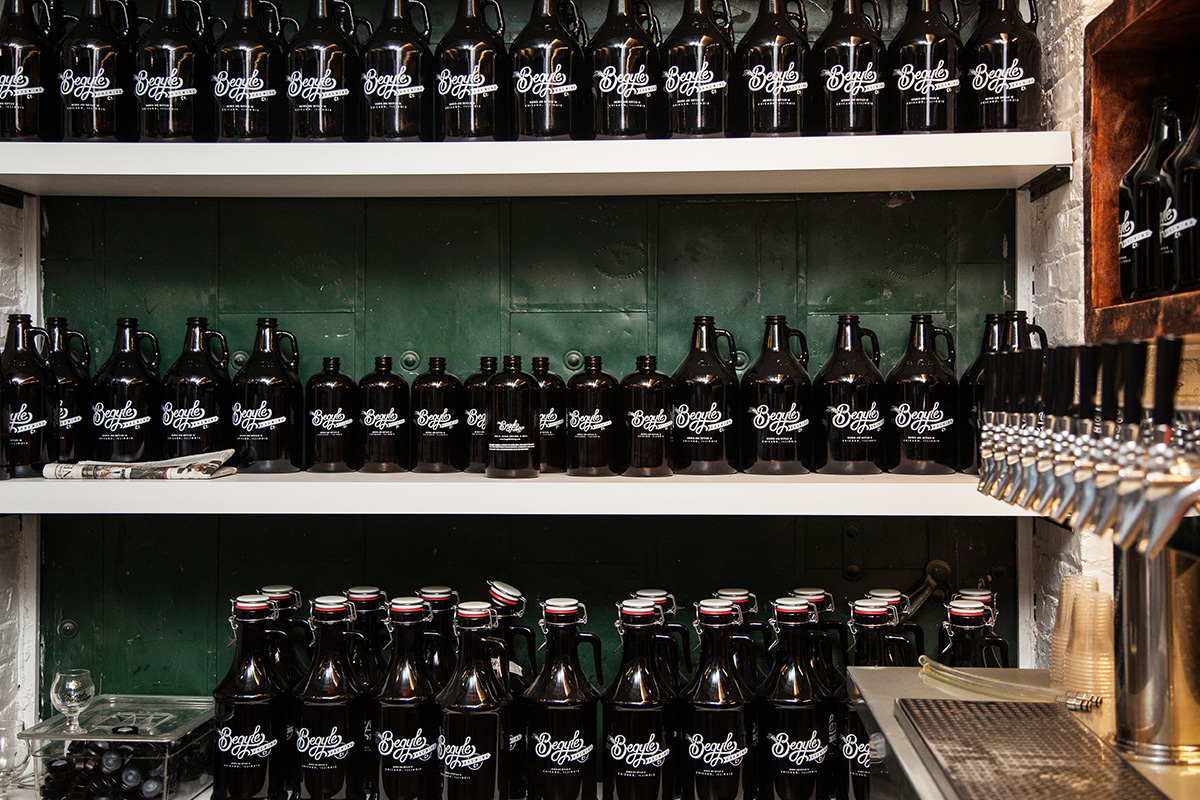 Stop No. 1 is Northcenter’s Begyle Brewing. Tucked tucked away on a quiet neighborhood corner, just north of the Irving Park Brown Line “L”, the once growler-fill-only stop now showcases a beautiful taproom and has established itself as one of Chicago’s major players. It’s also the oldest taproom on Ravenswood Avenue. With a strong core draft lineup, rotating one-offs, and a new family of canned offerings, Begyle shows no signs of slowing down. Oh, did we mention they have Skeeball? Consider this your morning warm-up. 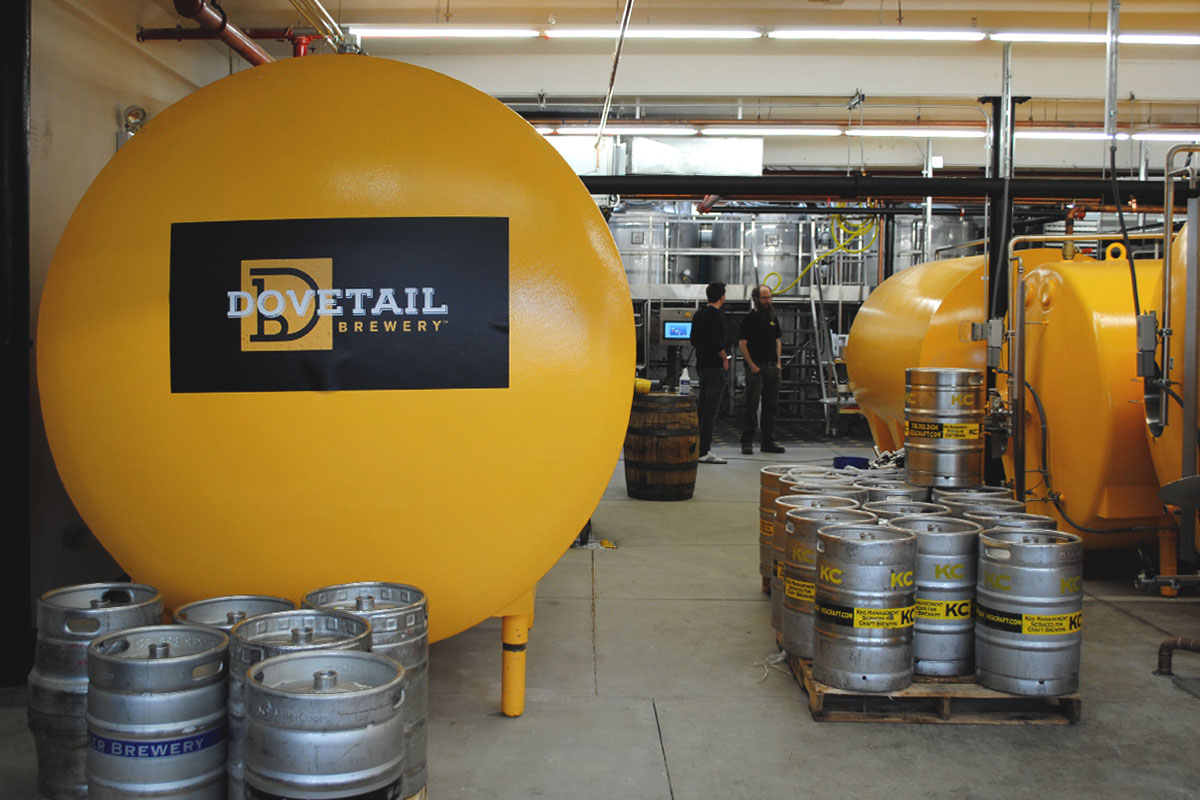 Since its opening, Dovetail has certainly made an impression not just on Chicago’s Northside, but across the country as well. Recently named ’No. 5 Best New Brewery’ by USA Today, their cozy taproom showcases a good handful of traditional European styles at any given time. The taproom itself is perfectly inviting and sits just one block north of Begyle. Featuring Chicago’s only coolship (that we know of), they’re brewing simple and clean beers that are perfectly to-style. Keep a close eye on Dovetail in the coming years as their stash of lambic barrels reach maturity and hit the market. 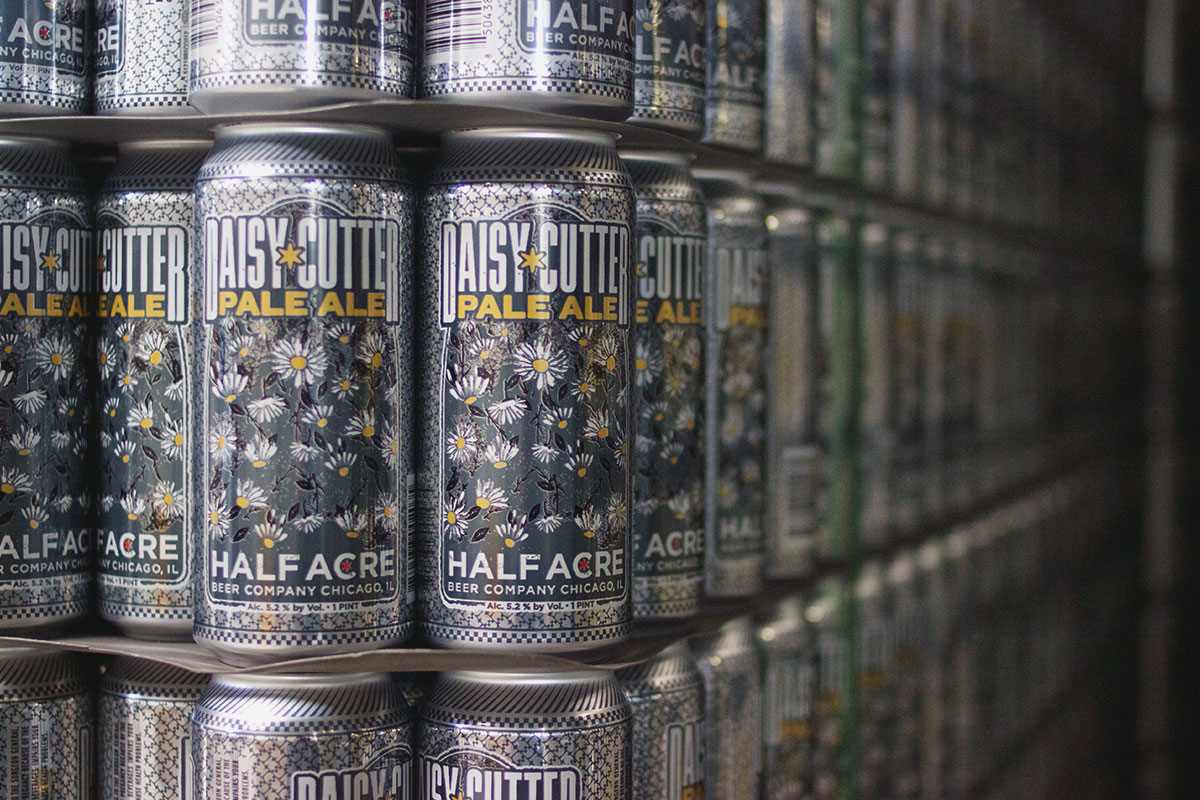 Head a few blocks west from Dovetail, to Lincoln Ave. and jog just north til you find Half Acre. This may feel like just a slight detour (because it is), but it’s well worth it. We’re unabashed fans of Half Acre and you’re likely to find a member of The Hop Review perched at the bar any given week. The addition of a full-service kitchen means it’s now even more difficult to snag a table at the diminutive taproom. But don’t let that get in the way of your Craft Crawl drinking, as it’s still easy to grab standing spot too. Make sure you sample something that isn’t available outside the taproom — an easy task with their new specialty taps, a nitro option, and their beer engine.

Our beer of choice: Half Acre Space IPA 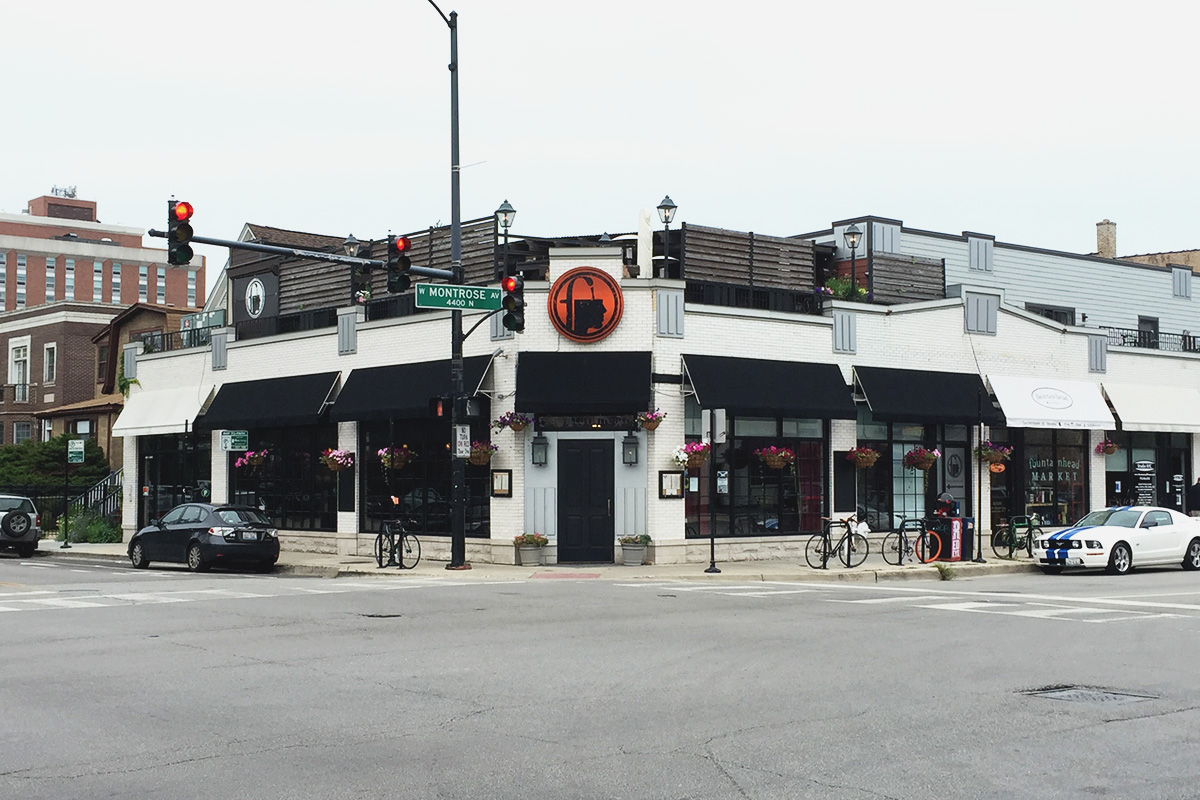 If you’ve held out on food til now, this might be a good option, and on your way as you head from Half Acre to the next brewery. Fountainhead has been a go-to for food and beer for years now and that doesn’t look to be changing anytime soon. The main bar offers up dozens of beers–and an even bigger selection of whiskey. The real star here though is their fantastic rooftop. While the beer list is a little smaller upstairs, it’s no less satisfying. And nothing quite beats sitting in the sun, beer in hand. You won’t feel like you’re right above a busy intersection and, like all the places on our list, the staff is always willing to recommend your next brew. 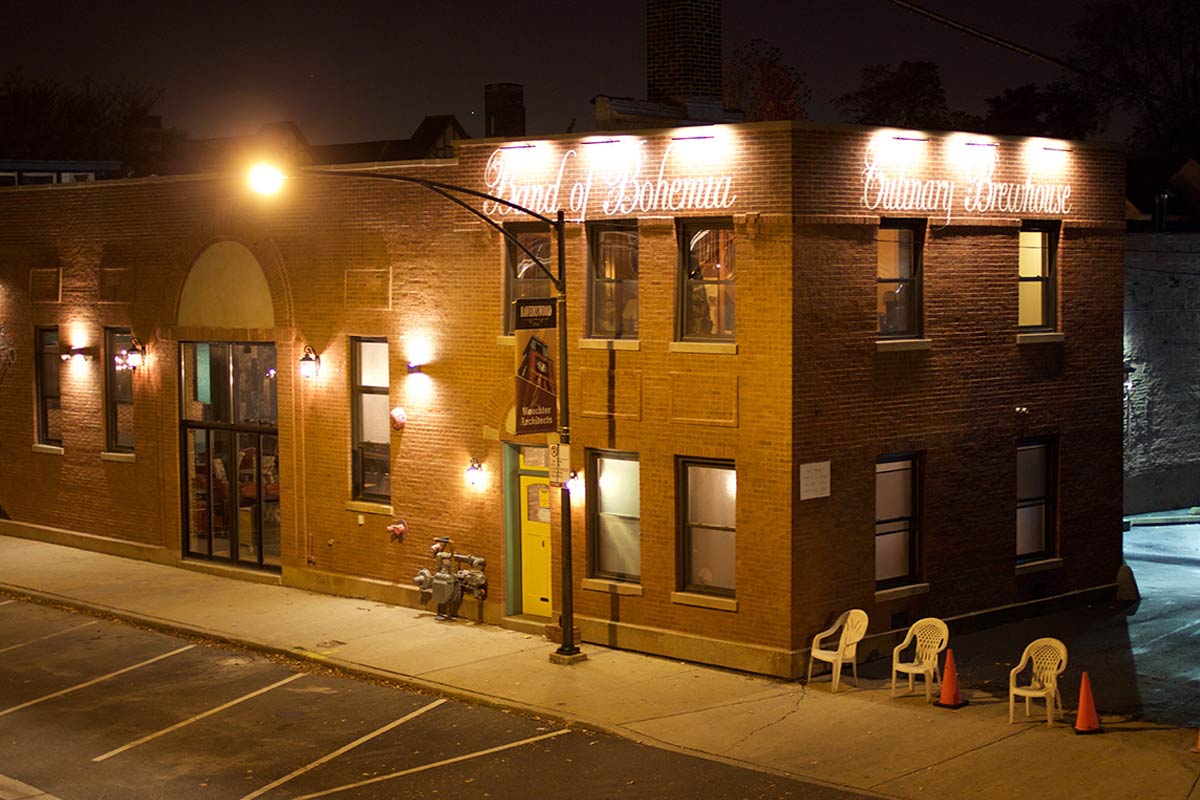 It’s becoming a tough task to stand out in Chicago’s crowded beer market, but Band of Bohemia does exactly that. They recently took home the coveted honor of being the  ’First Michelin-Starred Brewpub’. Brewing some of the city’s most unique beer, the “culinary brewhouse” pairs each menu item to a specific house-brewed beer. You’re going to try a few beers that may just ‘not be your thing,’ but we guarantee you’ll also find a few that are unlike anything you’ve ever had before. It’s not unlikely to see beer on their menu made from beets, guava, mushrooms, apricots, tea and other atypical ingredients. 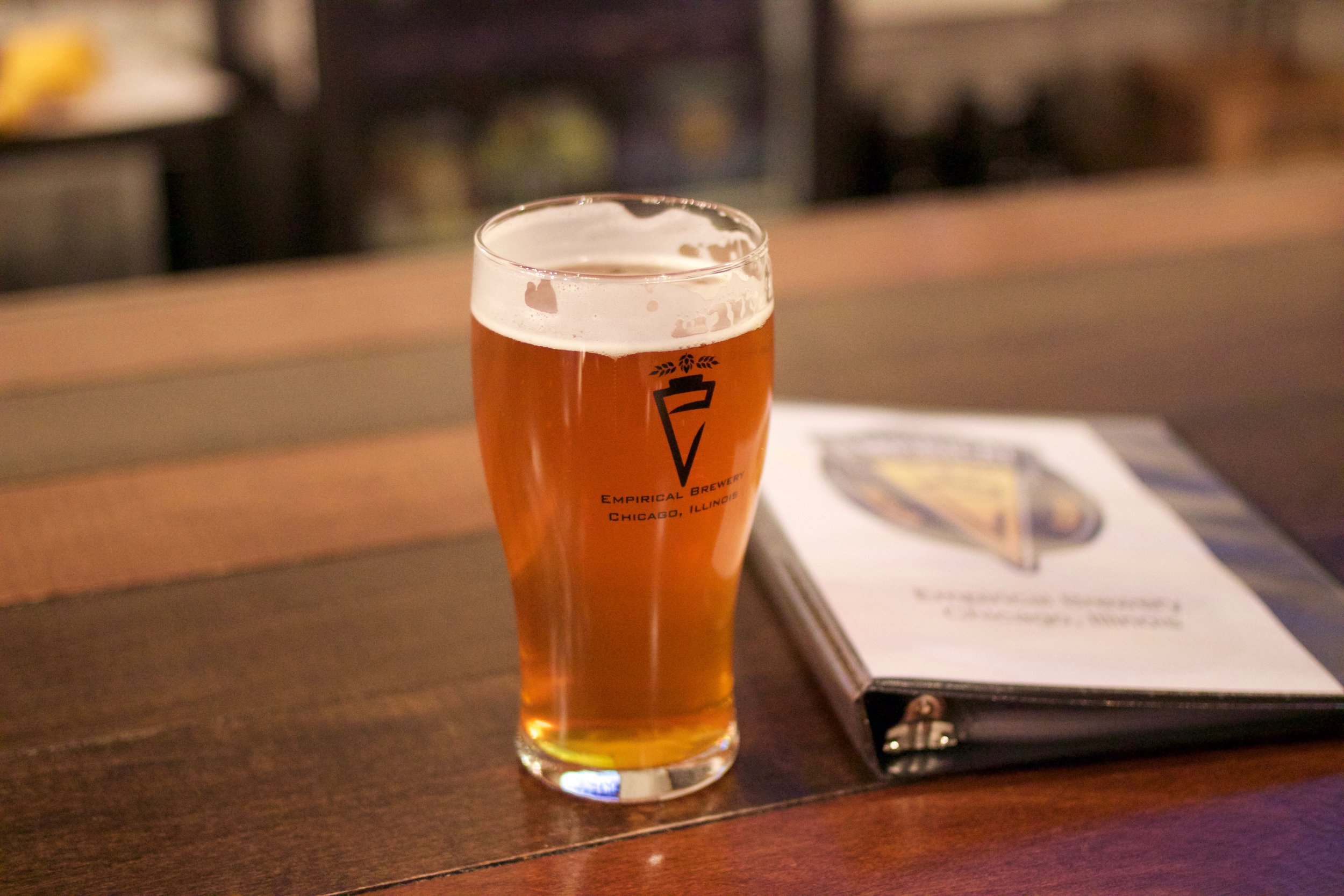 After drinking through some wild stuff from Band of Bohemia, a quick walk north will land you at Empirical Brewery’s spacious taproom. Another unique brewery in town, these guys took a different approach to ‘experimental ales’ – they’re known for brewing several test batches and letting the customer provide feedback to the recipe, and suggest which beers should maybe make it to batch #2. Get it, “Empirical”? If you’re in need of a mental spark by this point, they’ve got board games while you catch that second wind. 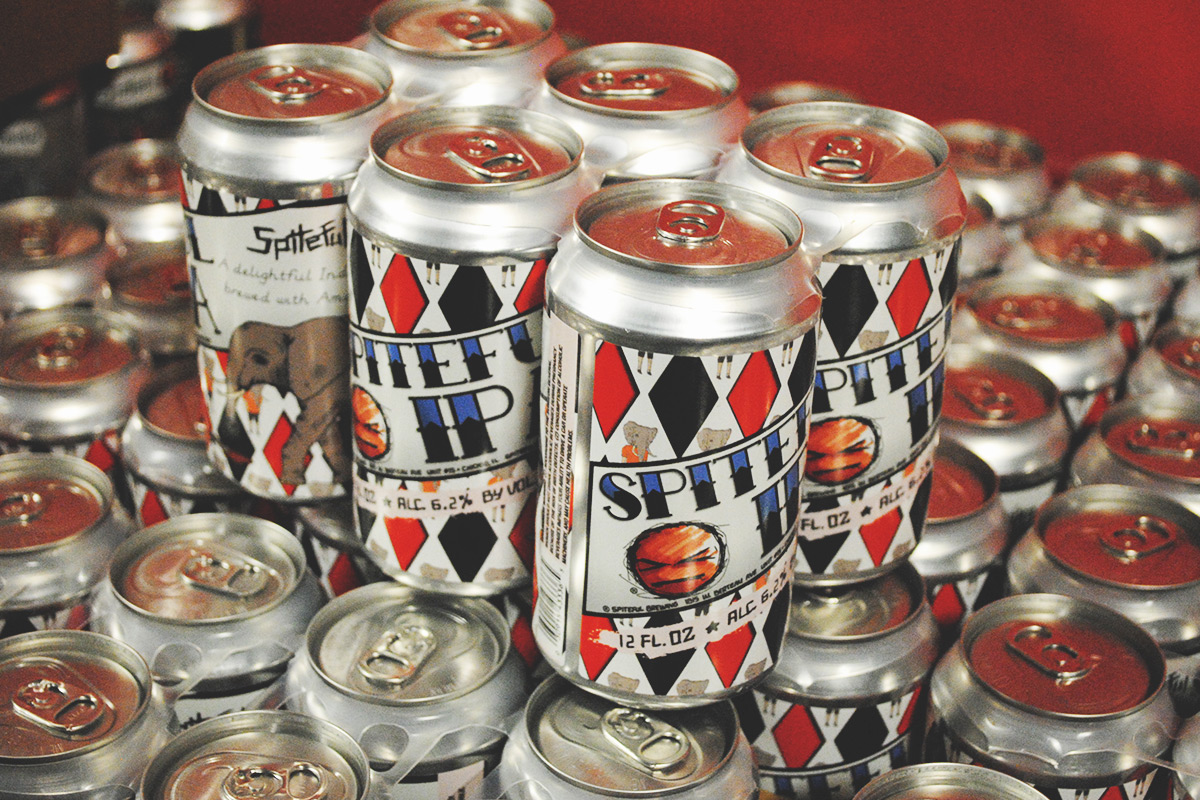 Now for Stop No. 7, there’s one thing to note. As you read this now, you cannot yet visit this acclaimed North Side brewer. For years, Spiteful has managed to brew in various cozy spaces – underground, hidden and bustling – in Northcenter. But now, they finally have moved north to Bowmanville, and are soon set to open the doors on their first taproom [Chicago rejoices!]. Given their illuminati-esque buildout and timetable, it’s hard to say when [Winter 2017/18??], or just what beers will be available there on tap or in package. But, we’re pretty certain whatever it is, it’ll be worth your attention. 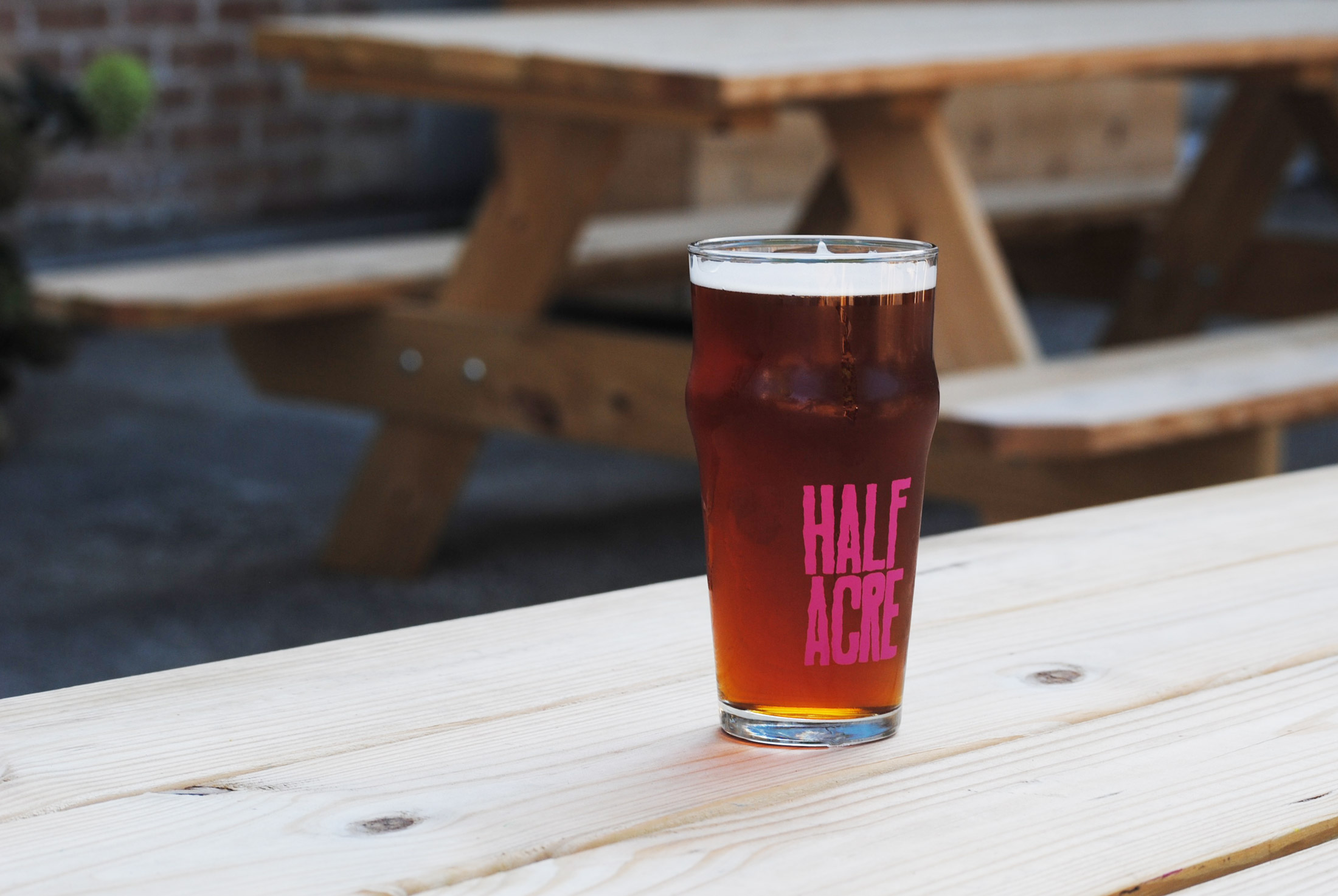 This second outpost of the city darlings, Half Acre, finally opened it’s doors to the public in September 2017, after three years of anticipation. And let’s just say, it’s worth the jaunt north (or the ‘Big North’ as affectionately dubbed by HA). And once their neighbors, Spiteful Brewing, one door to the east open, this block may become one of Chicago’s biggest beer destinations. The building itself is a Willy Wonka factory for some of the city’s best pale ales (and some darker stuff, too). And the new taproom is distinctly ‘HA’. Plus, it boasts one of Chicago’s rarest brewery finds: a beer garden. Plus, it’s food menu alone is worth the trip; small, but mighty tasty. 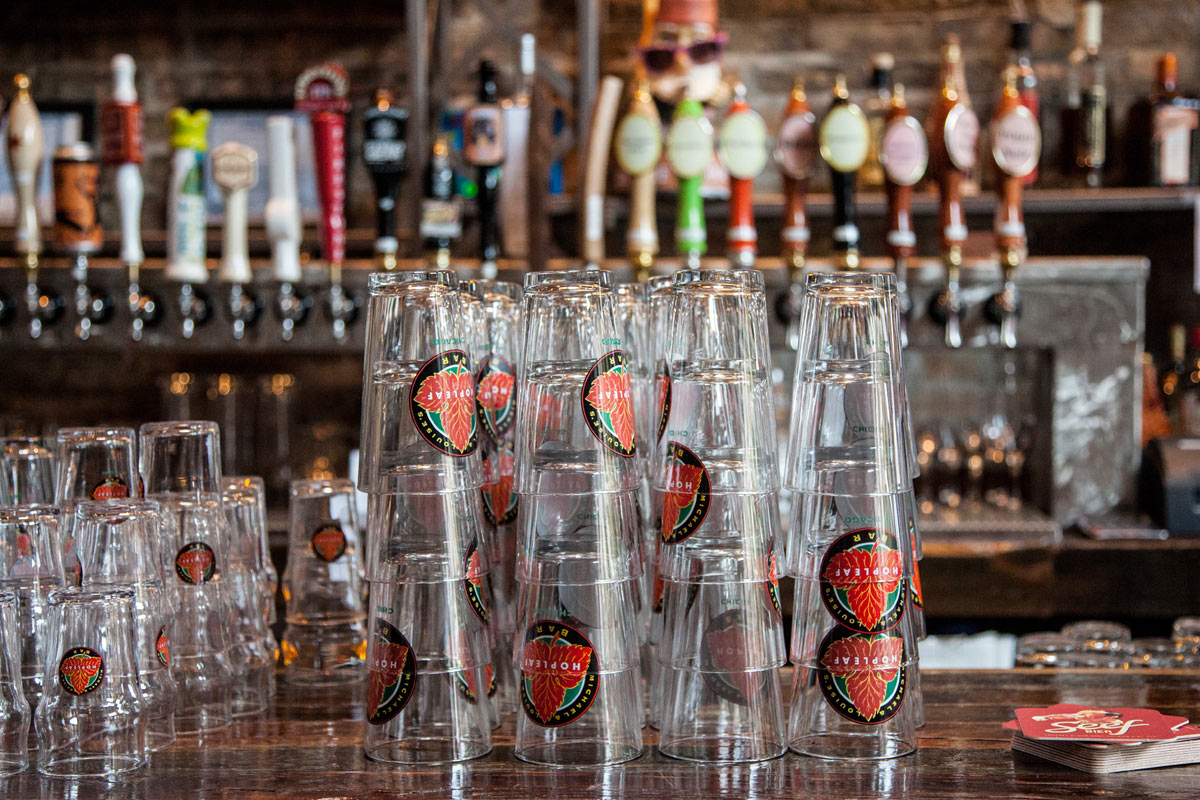 Now, with the official Malt Row stops in your rear-view mirror, we move north and east a few minute’s walk to the venerable beer temple in Chicago: Hopleaf. Located on Clark Street in Andersonville, this staple has been slinging pints, snifters and chalices for decades – all alongside some of the best pub grub you’ve ever had. It’s fair to say that no visit to Chicago would be complete without a stop here, so then it should hold true that your Craft Crawl should include the temple to Belgian beer as well. But it’s not just Belgians you’ll find. There are 70 taps and around 350 bottles of local and international offerings. Go here.

Keep it classic with: Saison Dupont 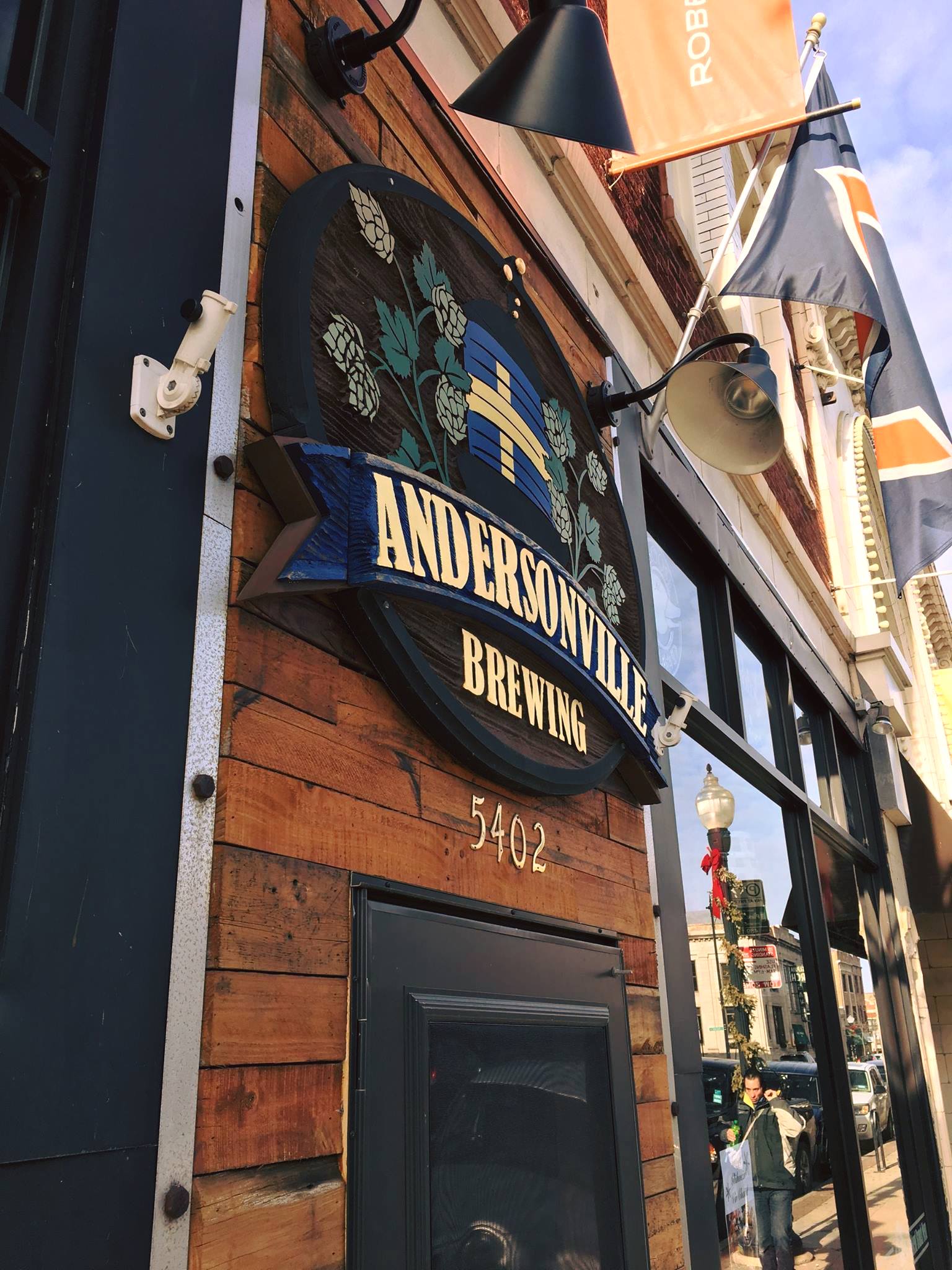 If you’re still hanging in there after the previous 9 spots, and potentially multiple food orders, then feel free to walk the 5 blocks north of Hopleaf on Clark Street to Hamburger Mary’s Chicago brewery, Andersonville Brewing. The kitschy restaurant chain plays up the neighborhood’s Swedish history with a quirky mix of ‘sports pub’ vibe. If you’re looking to end your night up here with something light, their three flagship ales will do the trick. If you are considering a desert beer, their Peanut Butter Porter might help you wind down too. Then, grab a cab home. It’s been a long day.

Considering starting your crawl from the north & ending at Roscoe Street, for this cluster of local favorites. Be sure to check their hours:

This, the 10th version of our Chicago Craft Crawl series, is in partnership with the Greater Ravenswood Chamber of Commerce, in conjunction with their “Malt Row” Brewery & Distillery Guide. Be sure to look for the Guide at participating locations along Ravenswood Avenue (*Marked above by an asterisk). 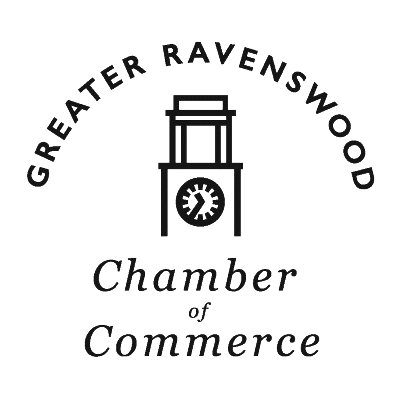 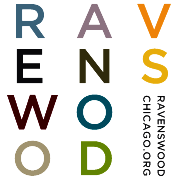