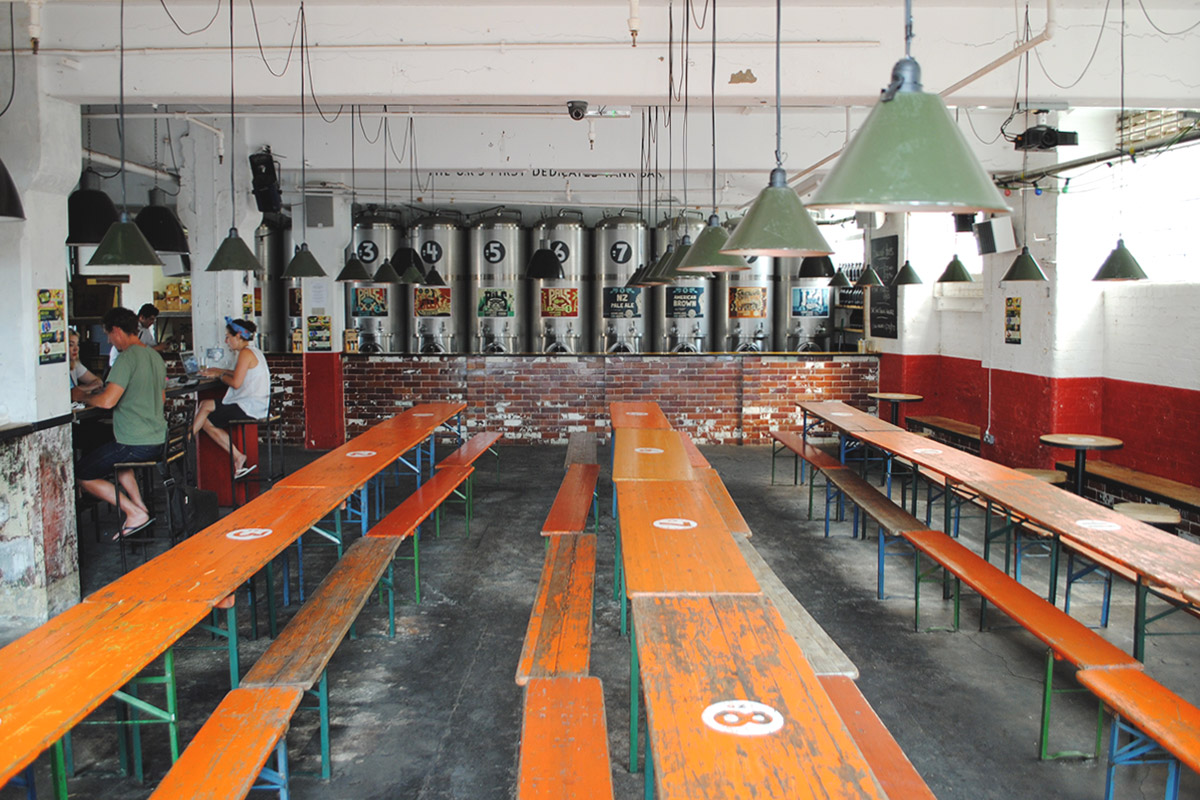 Located in (North)East London’s Hackney Wick neighborhood, in the shadows of the former Olympic Stadium, is Howling Hops–a brewery unlike any you’ve likely visited before. Tucked back in a gritty industrial lot, off of maybe the most graffiti-laden road you’ve ever traversed, there’s a hum of unexpected activity–artist’s studios, boutiques, cafes and other various makers going about their craft. Howling Hops (and neighbors, Crate Brewery) are the anchors to this micro-community, with the former marking 2016 as its first full year in the space. Previously, HH’s beers had been brewed for four years within the Cock Tavern on Mare Street.

Upon entering the brewery, the space’s intention makes itself known immediately: 10 towering tanks, clearly numbered and labeled, sit behind the bar ready to serve beer. There to greet us behind the bar was Operations Manager, Katie Sheasby. Immediately, we find ourselves sampling the lineup. Several pale ales, a red ale, a hefeweizen, an American brown ale, a pils and a coffee stout. There’s a common thread here: American-inspired, as many of London’s craft beers are. The beers are unabashedly bold, juicy and hop-centric–but distinctly boozey, with ABVs averaging around 7% or 8% each.

When we ask Katie about the inspiration behind the unique serving approach, she goes on to tell us how owner, Pete Holt, decided to pour pints right from the tank. “Pete had never seen it served this way before. And he liked the thought of it being pretty much straight from the tank–without all of the pipes, the mess, the chaos and the need to clean things that normal dispensing requires. There are also environmental benefits, because you don’t have to wash as many kegs–instead you just fill up the tank and that’s that.” And with that, we’re satisfied. It all seems to make perfect sense. And if the beer is any barometer–which of course it is–we’d say this all was a good decision.

IPA West Coast Special No. 2: Howling Hops’ take on the American Pale Ale, but still weighing in at 6.9%. This beer packed the citrusy punch you’d expect from an APA, thanks to Mosaic, Amarillo, Simcoe and Columbus hops. It carried a little boozey heat, but overall it was just…juicy. There was no mistaking its intent. Maybe not what you’d traditionally reach to pair with BBQ, but on this day, it did the trick. 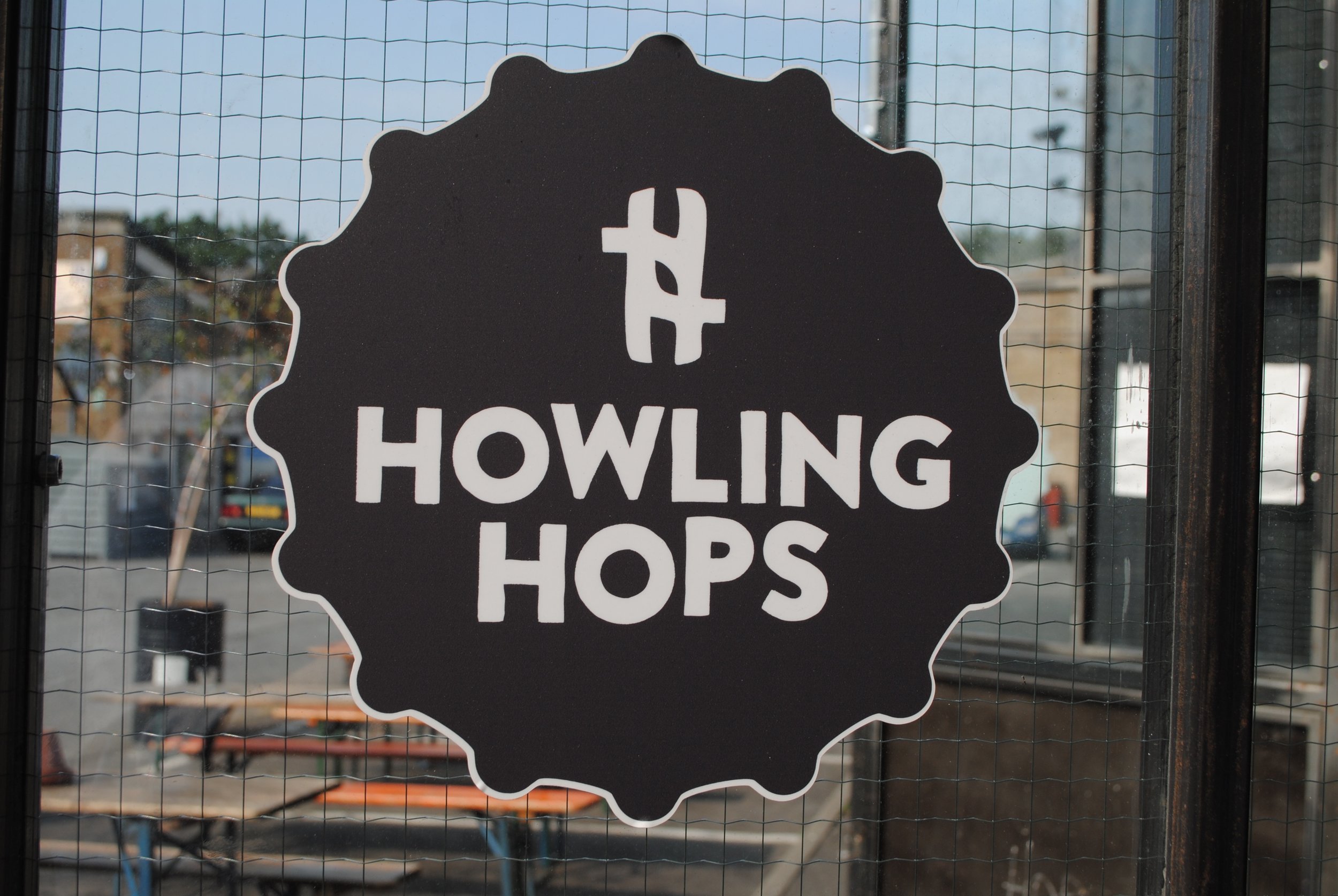 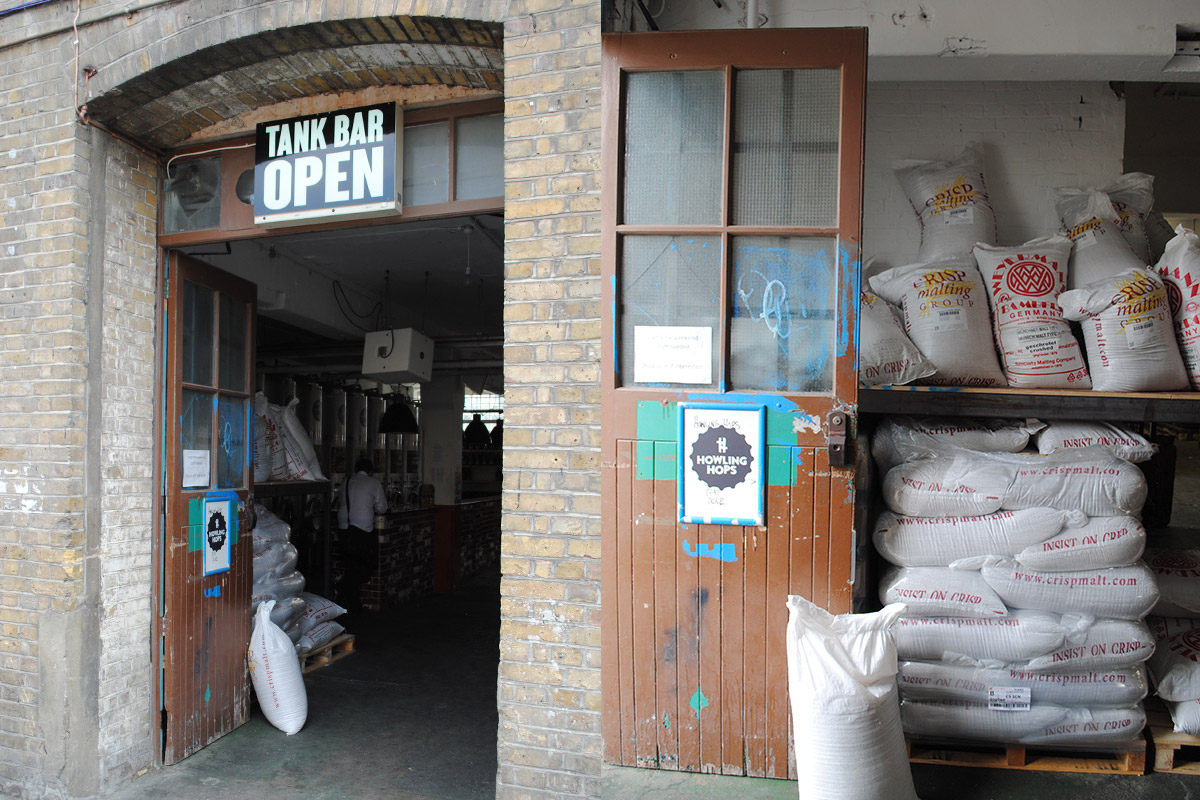 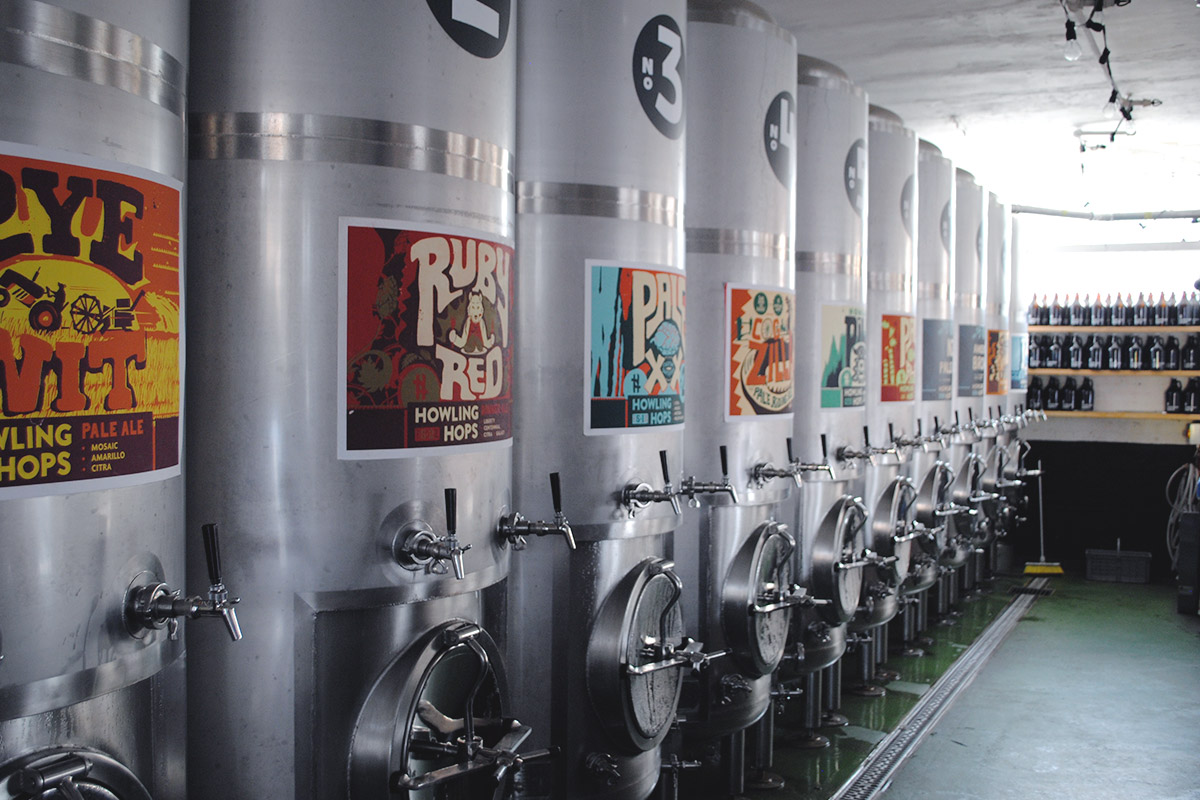 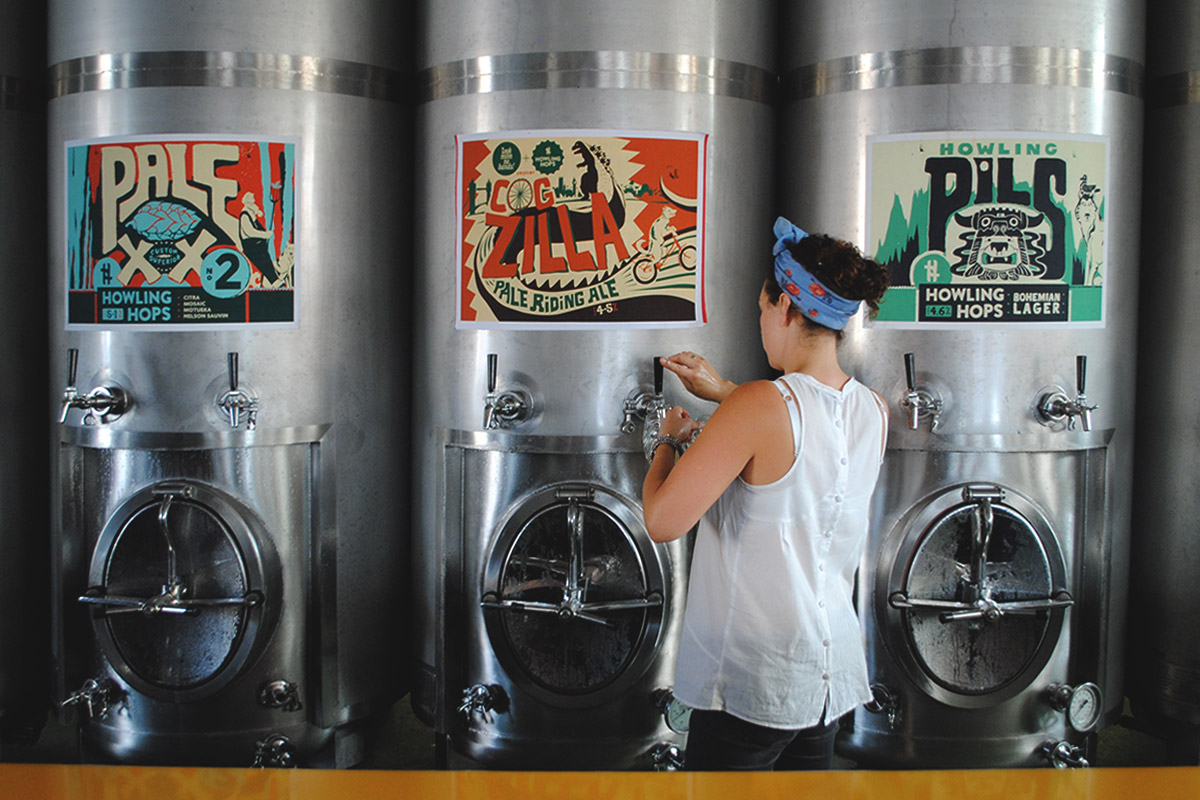 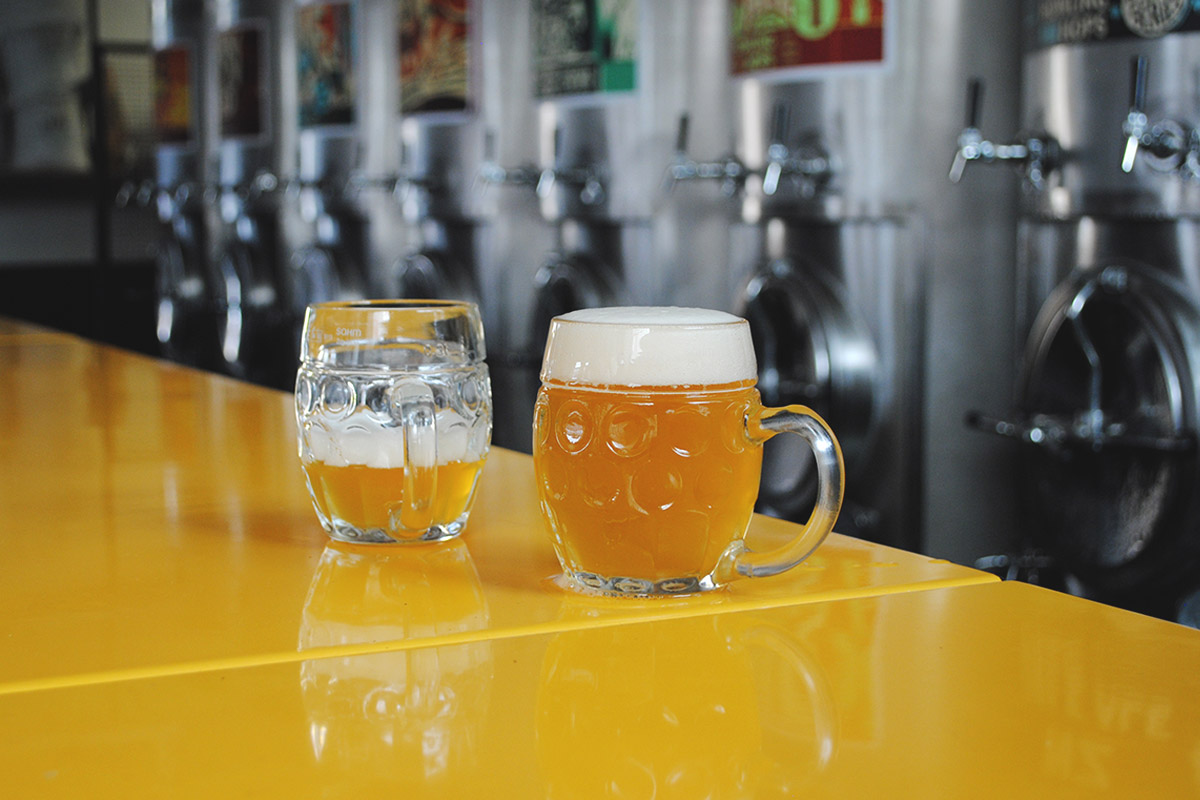 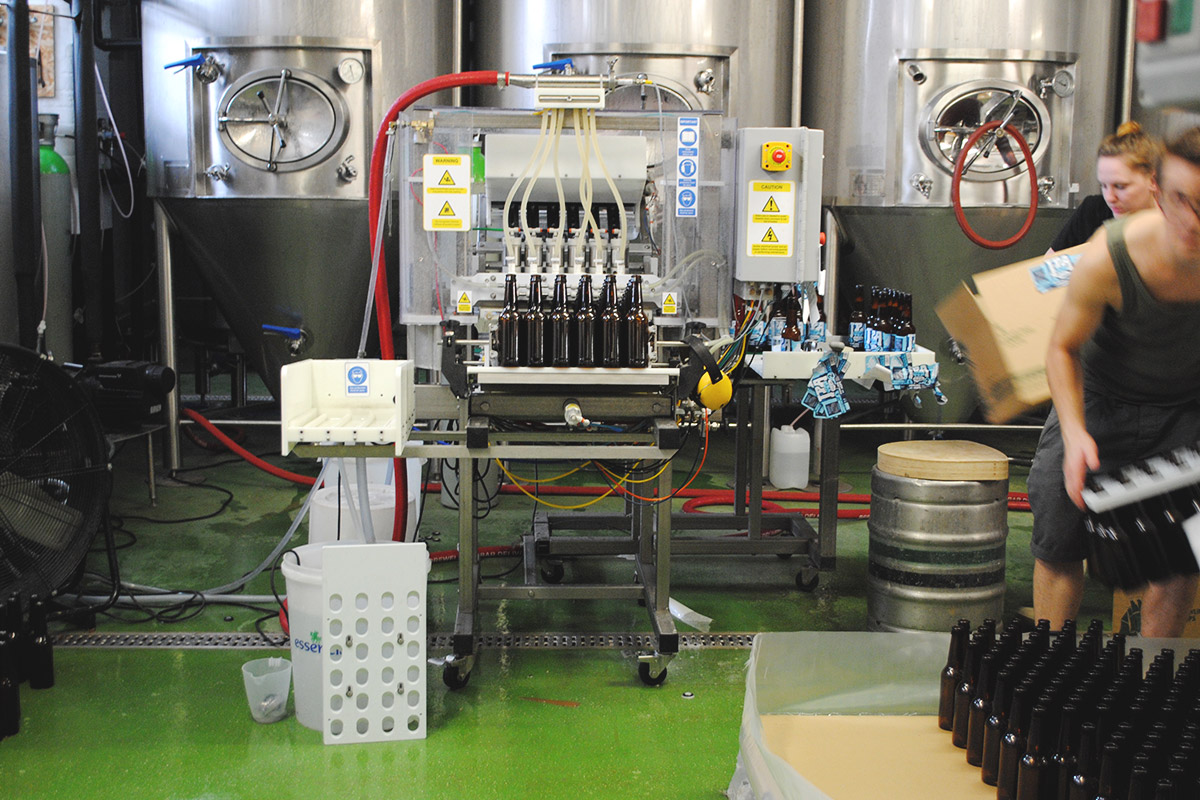 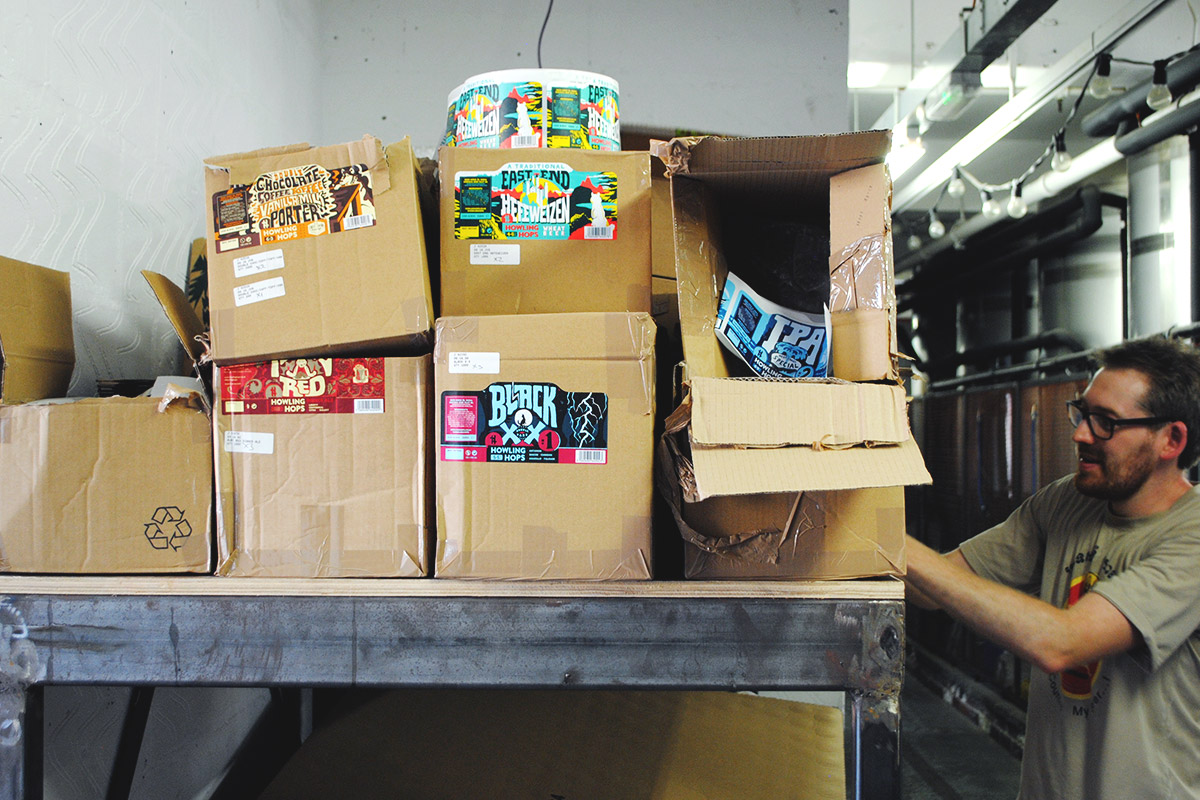 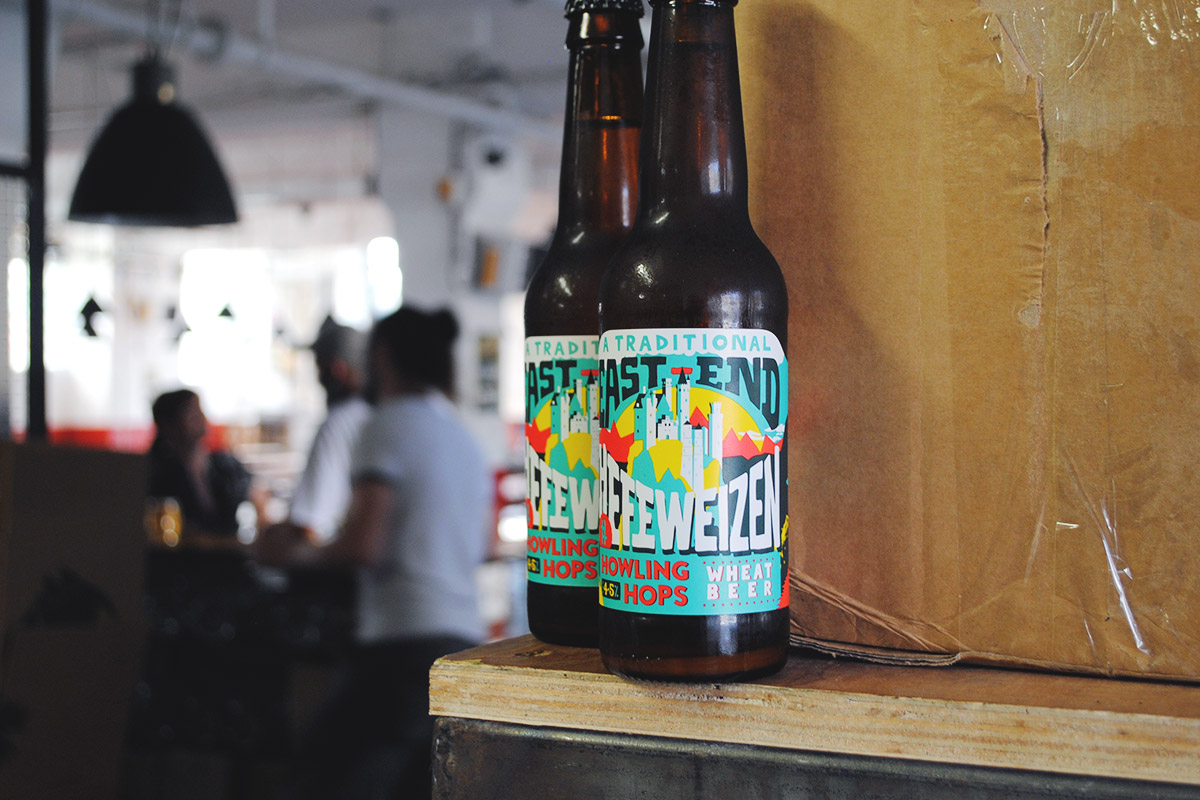 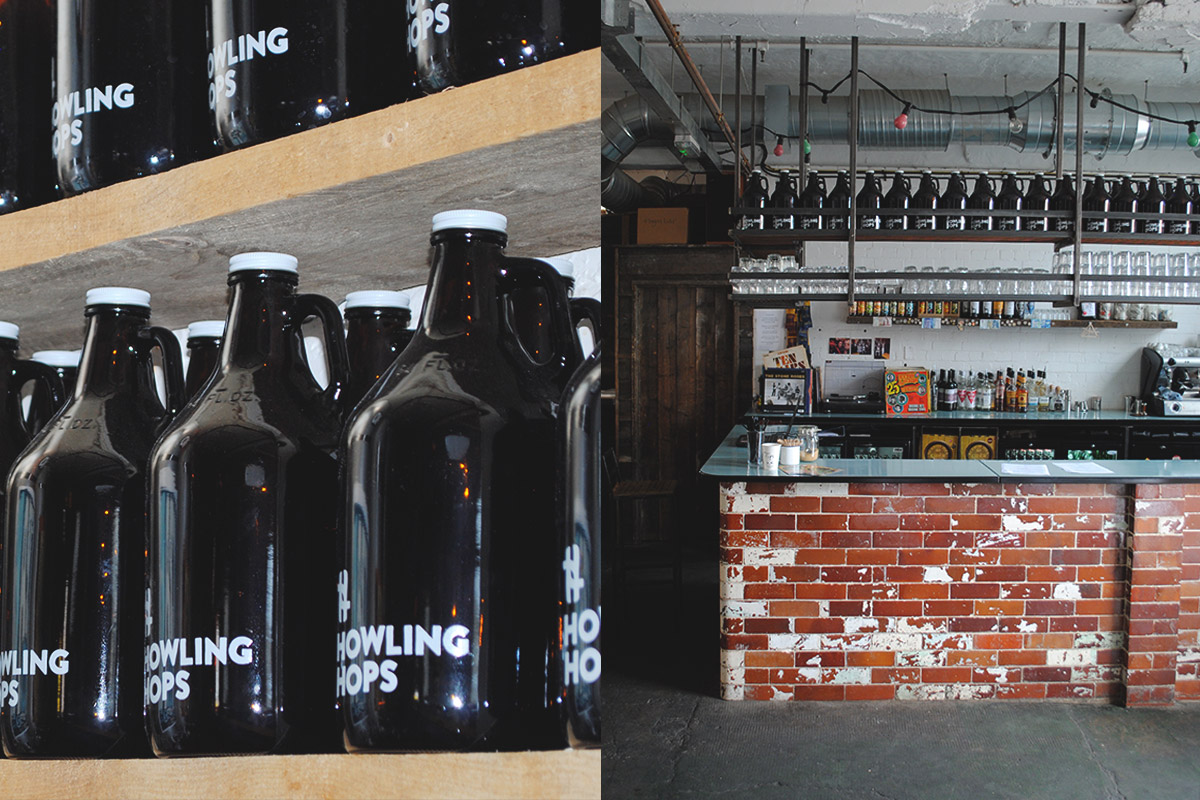 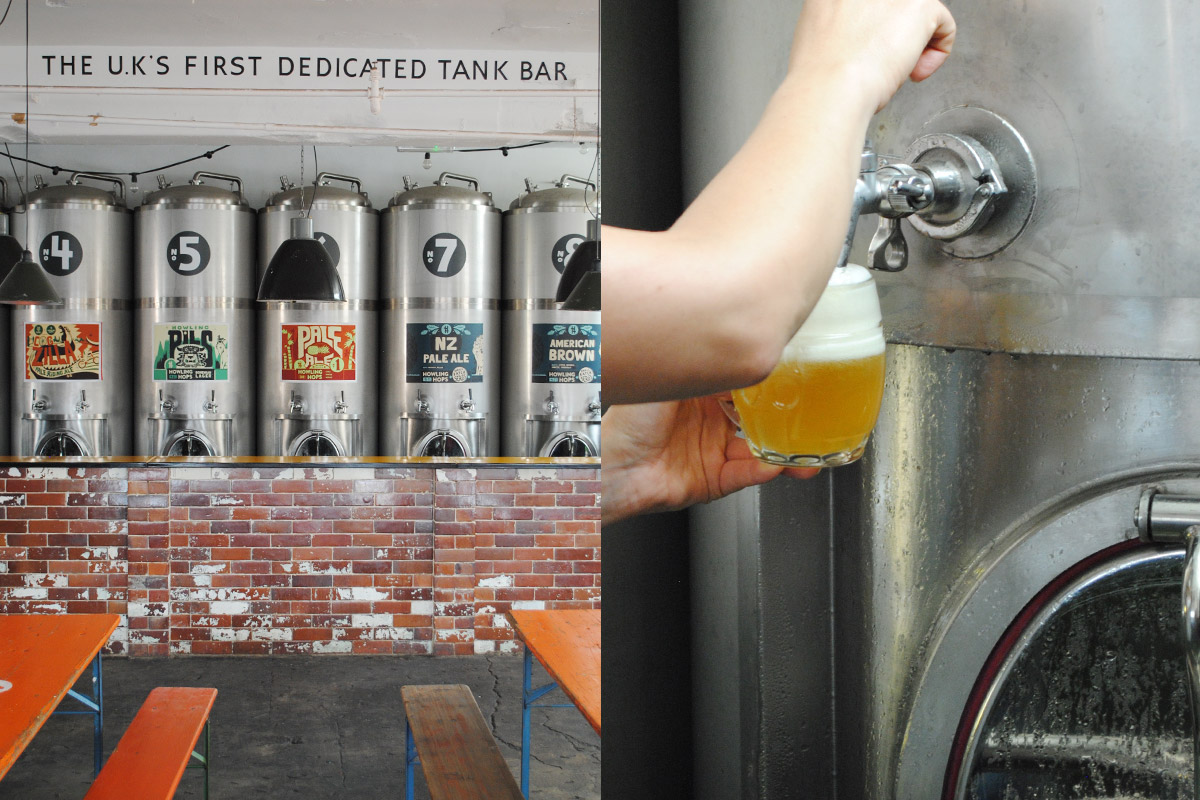 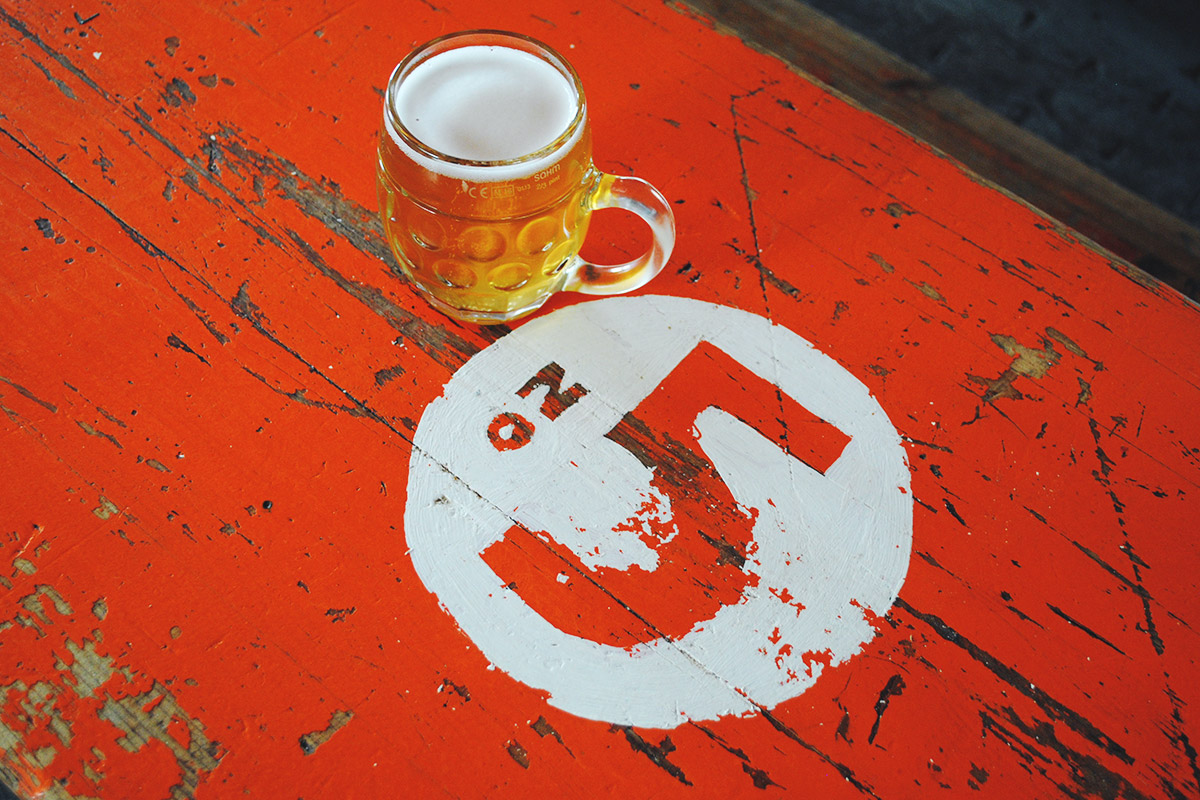 Authored by Jack Muldowney & Paul King, collaborator for The Hop Review. Paul is a beer fanatic born and raised in London, England. This is his second contribution for THR–he had also provided insight for the previous piece, “London’s Craft Boom Apparent on the Bermondsey Beer Mile.” 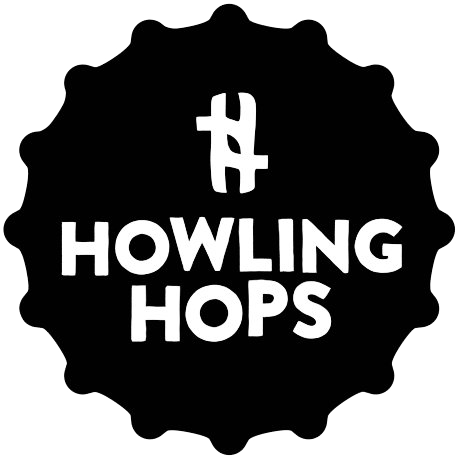