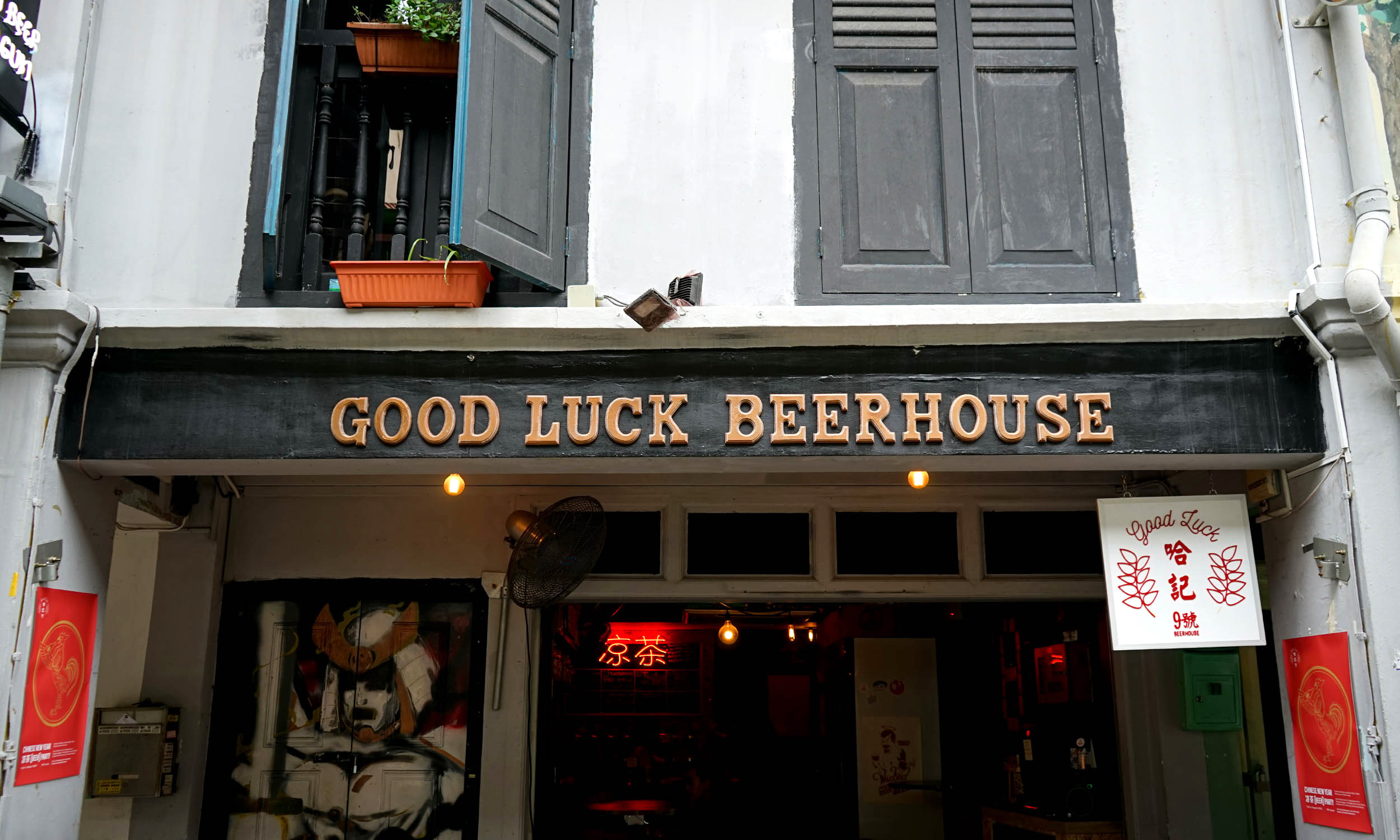 Although small in its geographic footprint, Singapore transcends beyond its Little Red Dot nickname. The tiny nation-state-island may be nestled between Malaysia and Indonesia, but Singapore’s global status is substantial in comparison to its’ Southeast Asian neighbors.

As a historic trading port, Singapore is multidimensional and multicultural. Malaysian. Indonesian. Peranakan Chinese. Mainland Chinese. Filipino. Arab. Sri Lankan. Tamil. Australian. Western, Central and Eastern European. With such intertwined history with various cultures, Singapore even has its own dialect of English language fittingly dubbed Singlish. Adding to the diversity, Singapore is religiously broad. Christians. Muslims. Buddhists. Hindus. Taoists. Even a sprinkle of Shamanism. It’s only fitting that Singapore’s ethnic, cultural and religious diversity is reflective of its economy.

Wealthy and prosperous, Singapore is an international financial and trading hub. With such thriving foreign trade constantly bringing workers, whether blue-collar or white-collar, from the world over, the city-state has also heavily invested in its infrastructure. Basic city amenities offered in Singapore are done exceptionally well. Clean and efficient public transportation services. Nice and tidy roads with orderly traffic. Beautiful, lush and green public parks. And, clean and spacious pedestrian sidewalks.

With excellent public works built into the city grid, it’s easy to see why Singapore attracts people from everywhere, whether it’d be for work or for pleasure. From major sporting events and music festivals to world-class museums, there’s plenty to see and do and it especially helps that getting to and from is a breeze. Also, if one just merely wants to comfortably sit, relax and watch the world go by, there’s plenty of places for that too.

One such place to unwind is Good Luck Beerhouse. Just a short jaunt from the immaculate Sultan Mosque in the Kampong Glam neighborhood and down bustling Haji lane, Good Luck Beerhouse is the place to be to enjoy a properly served pint of craft beer. Serving fresh & rotating draft pours from Singaporean and Australian breweries as well as an excellent international bottle selection, Good Luck Beerhouse is devoted to quenching the thirsts of craft beer drinkers. As noted by owner and taproom manager Kevin Ngan, although ‘craft beer’ is making its way across Asia, the term ’craft’ is most of the time thrown-in by a bar to get patrons in while still serving major commercial lagers. But, Kevin isn’t easily deterred amongst the competition and the consumer confusion. As a craft-beer advocate, Kevin along with his bar patrons have an unwavering thirst for quality beer and are strong supporters of the emerging craft beer scene in Singapore.

Originally from Hong Kong with a former banking background with various stints in the USA, Guam, Philippines and Australia, Michael turned his homebrew hobby into a full-time pursuit after settling in Singapore with his wife. During the process of establishing the brewery and through acquaintances, Michael met Lesley, a lifelong Singaporean with a background in digital marketing. Both had a genuine appreciation for the developing craft beer scene in Singapore and turned their mutual interest into a business partnership. While Michael handles the day-to-day operations, Lesley manages the brand, marketing and events.

And, the two of them make an excellent team. Michael’s humorous demeanor and workmanship combined with Lesley’s courteous attitude reinforced Innocence Brewing’s Singaporean beer philosophy: friendly and approachable. With their 4 flagship brews – a session IPA, a Coffee Ale, a Wheat and a Porter, Innocence Brewing ensures their beers fit the clientele and the climate. Currently, all their beers are reasonably sessionable with a focus on balanced flavors of malt, hops, yeast and an occasional showcase of an ingredient or two. Seeing how bitter West-coast style IPAs and hefty imperial stouts aren’t part of the Singaporean beer palette (yet), Innocence Brewing is emphasizing flavorful, easy-going beers for the community.

With just a few days to enjoy the city, Kevin, Michael and Lesley all chimed in with various suggestions, offers and to-do’s to make the most of our time in Singapore. Amongst the delicious beers, inviting atmosphere and friendly banter, it’s easy to see Singapore’s charm is due to it’s most important city amenity; the friendly people and the welcoming culture. 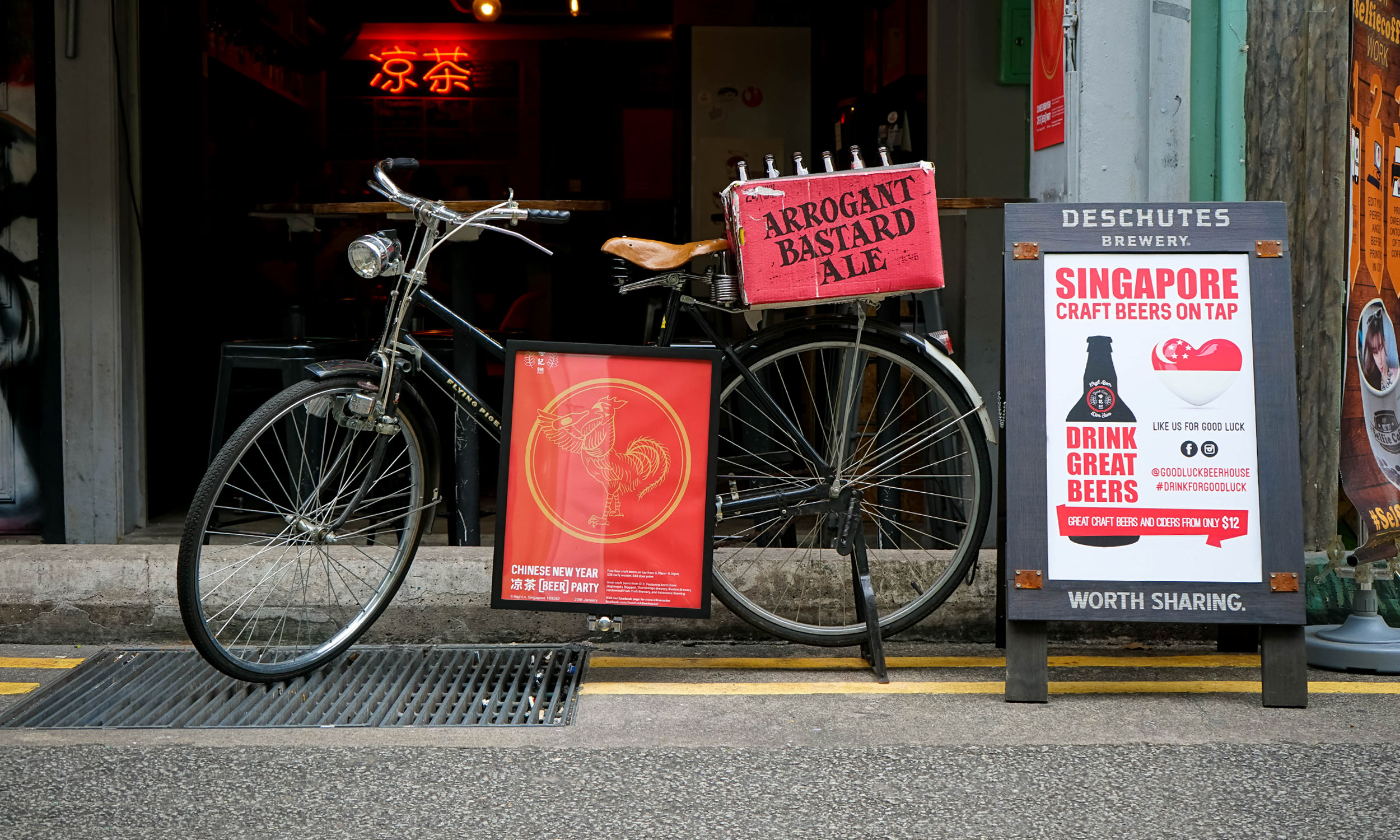 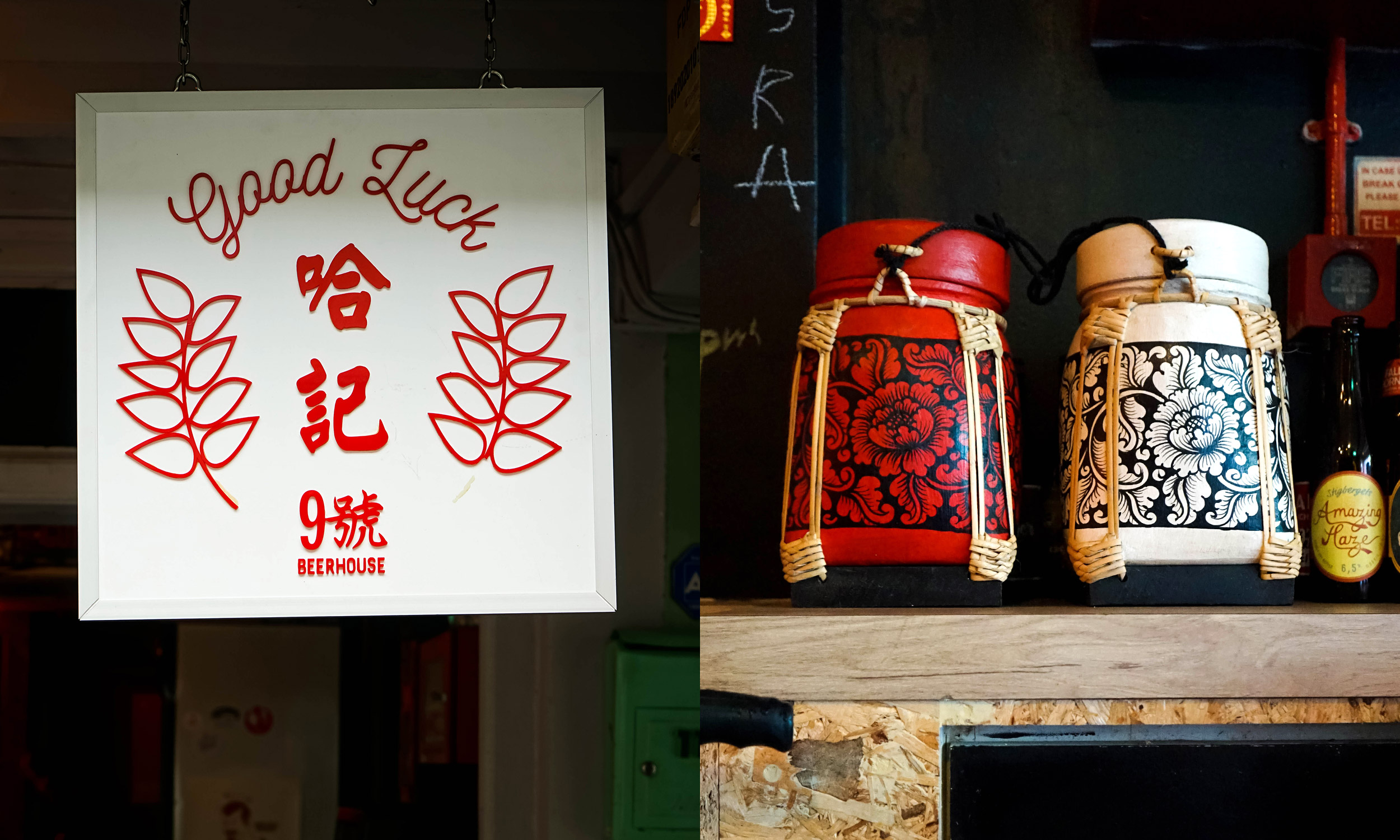 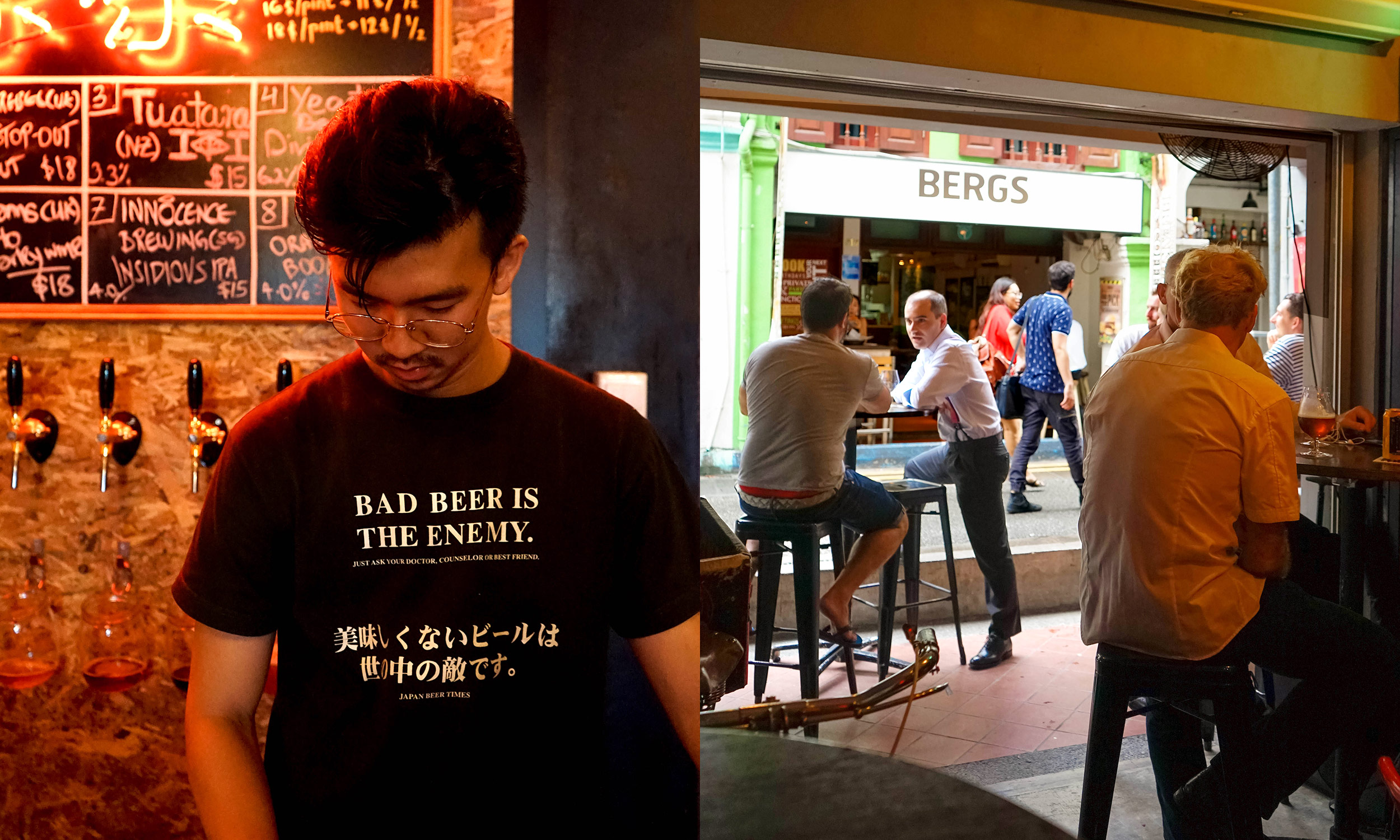 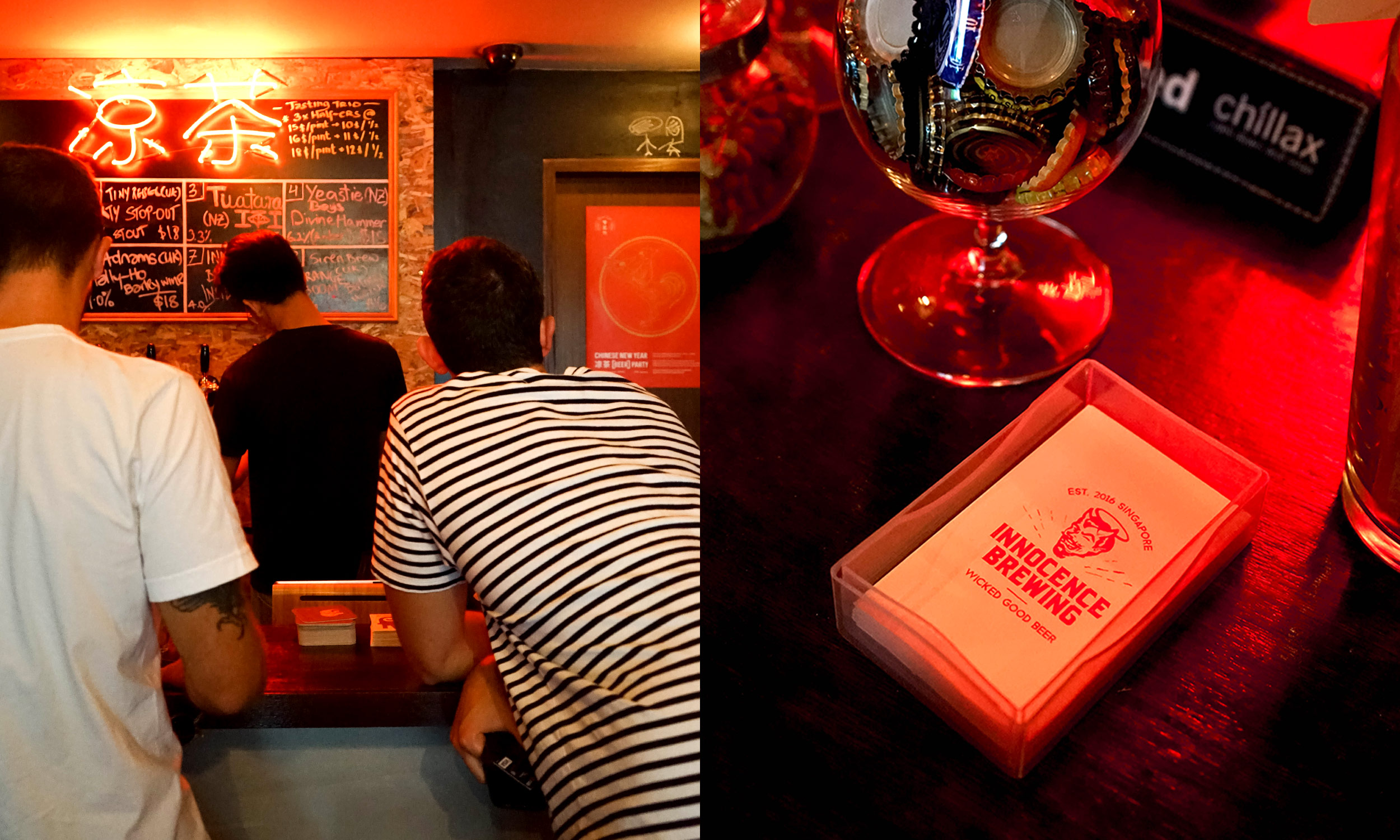 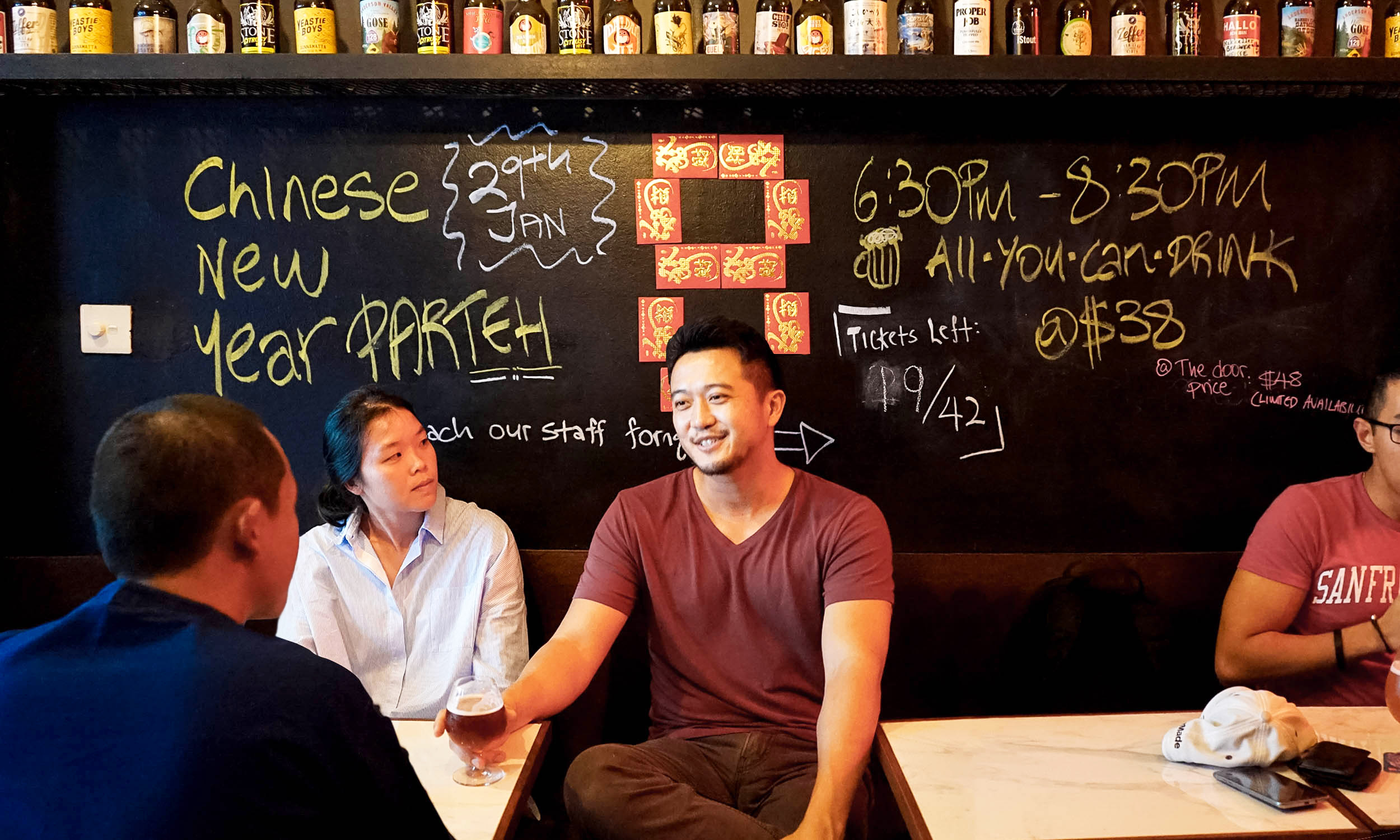 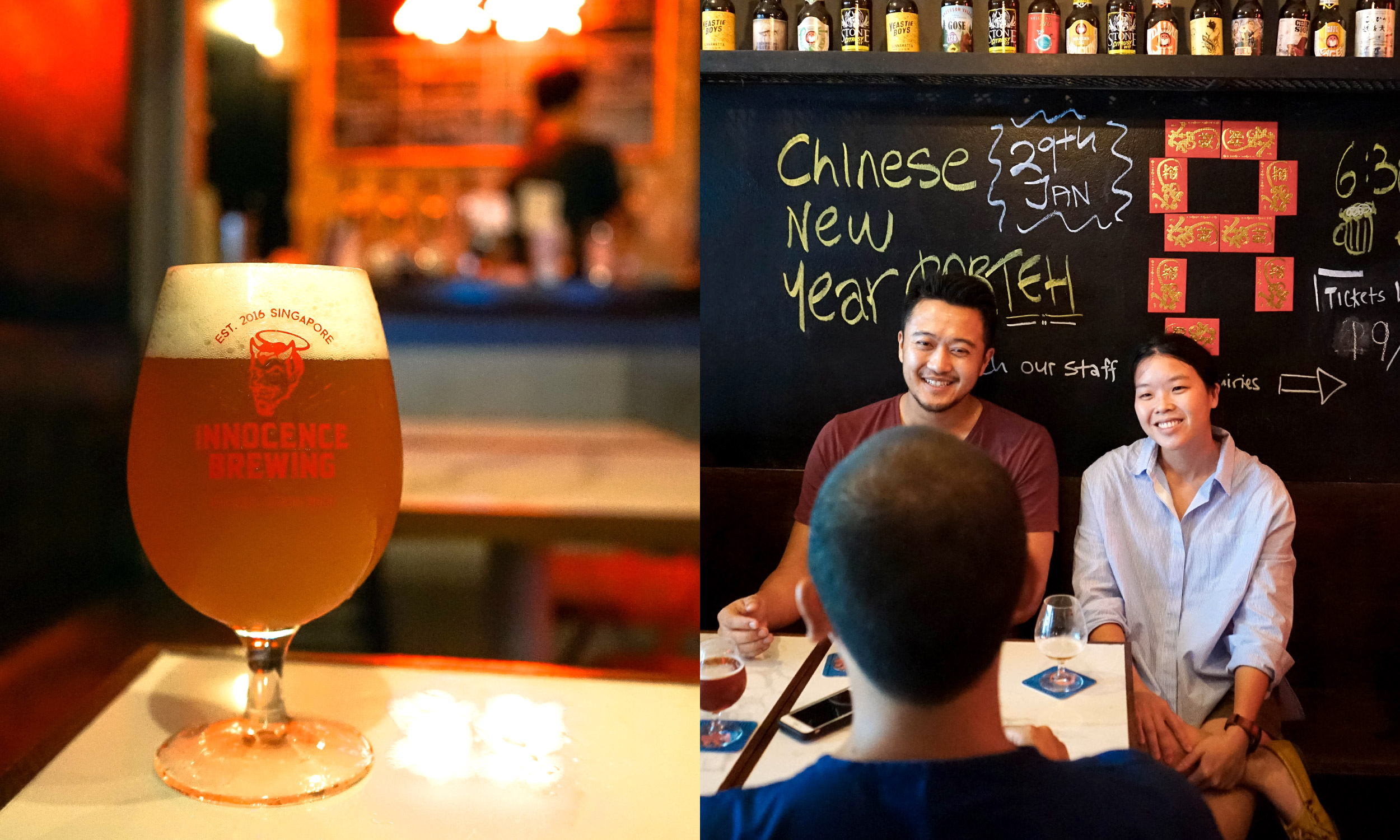 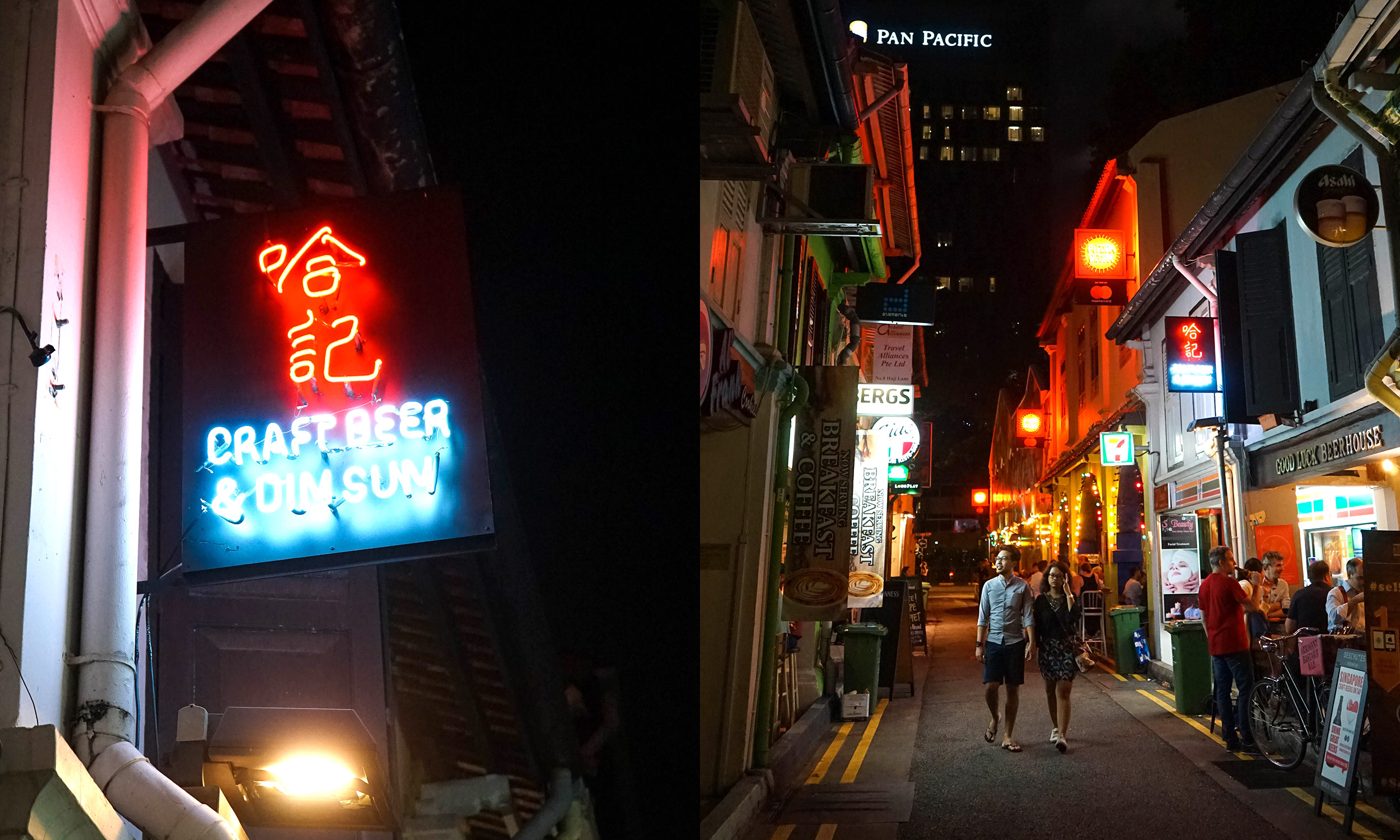 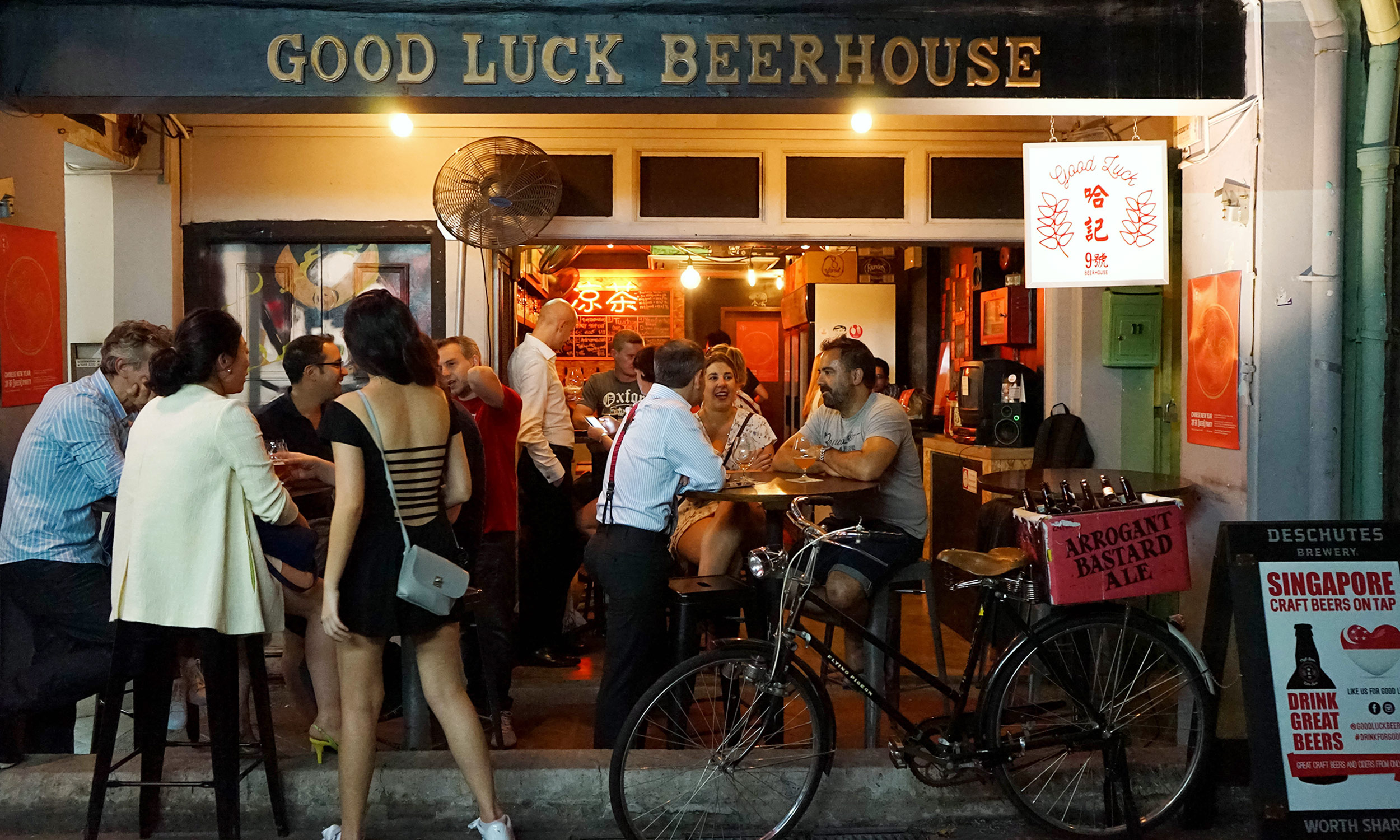 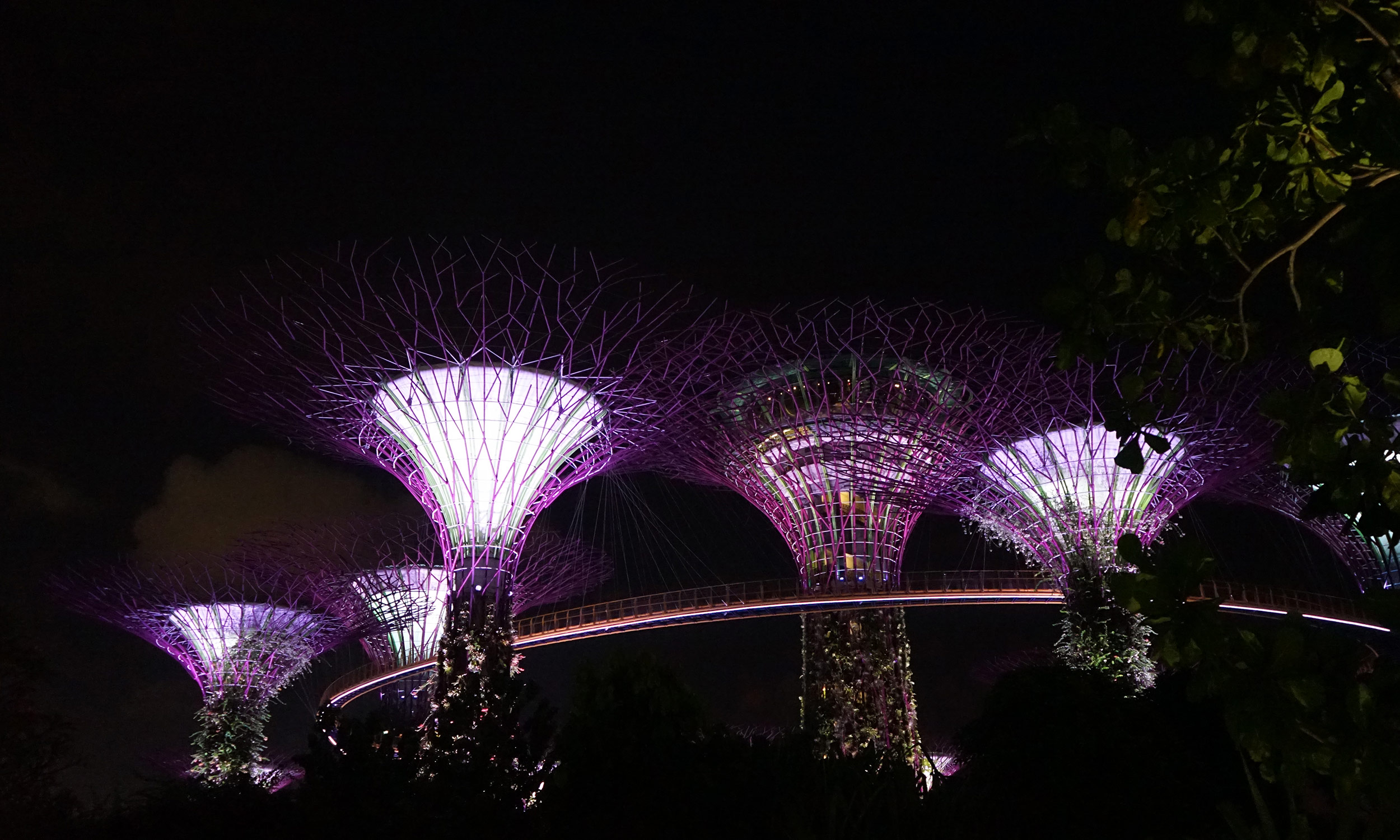 Authored by contributing travel writer and graphic designer, Meng Yang with photographs by Tiffany Yang. You may have seen the pair over the years in Chicago hustling posters and t-shirts under the moniker KnowYourFlag. 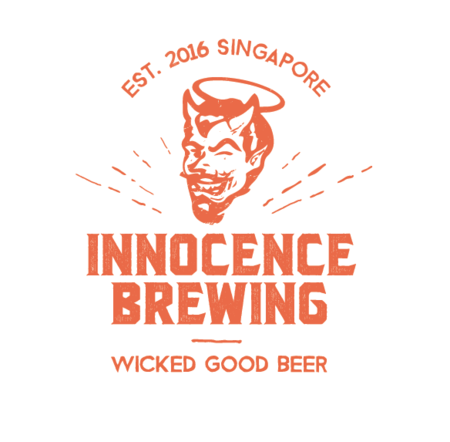 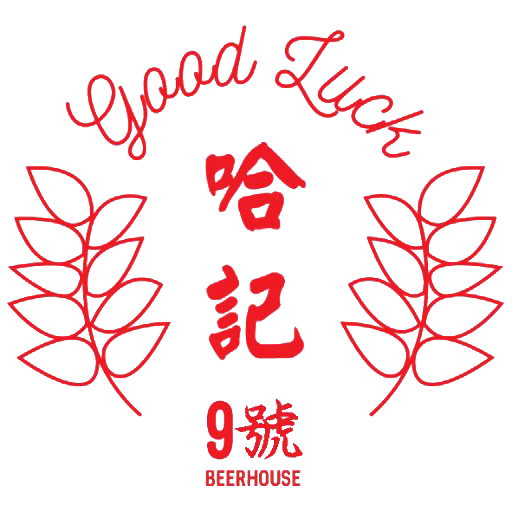