Like many modern beer drinking trends – see: IPA – the idea of “session” beer starts with the British. It is said the earliest beer-drinking sessions started during World War I, when English factory workers were allowed to imbibe on the job during two daily sessions.

According to BeerAdvocate.com, there was one midday session (11 a.m.-3 p.m.) and one evening session (7-11 p.m.). During these two sessions, artillery shell production workers were allowed to drink low-ABV offerings, the thinking being they could still focus on work and not get too disorderly, while being a whole lot happier on the factory line. Back then, the beer of choice would have been an under-4 percent English mild or bitter ale, served in an imperial pint glass (20 ounces), and consumed at the rate of about one per hour, hardly enough to have anyone stumbling home at the end of the day.

So What Defines a Session Beer?

In today’s booming craft beer era, we are now seeing countless beers in the double-digit-ABV range, with many stretching upward of 20 percent ABV or more. A mere bottle of some of those boozy beers and you would be done for the day! Thus, a need for lighter offerings and the reemergence of the session beer.

Unfortunately, for many modern beer drinkers, session beer has become somewhat of a “know it when ya’ see it” proposition. In fact, many Americans have come to define session beers simply as something not “imperialized” – meaning around 6 percent or so. Sure, you could drink a half dozen of those in an afternoon, but that doesn’t mean you should!

In the U.K., a session beer has always been strictly capped at 4 percent ABV. In America, where “bigger is better,” even when it comes to easy-drinking, session beer is typically allowed to reach up to 5 percent. That’s no surprise; until recently, finding beers under 4 percent, even in “lite” offerings, was fairly tricky. Many folks believe that 5 percent cap is purely arbitrary – just something started by the Centers for Disease Control and Prevention, which defines a “standard” beer as 12 ounces of something averaging 4.5 percent.

Lew Bryson, a noted beer and spirits writer who founded The Session Beer Project in 2009, believes the absolute maximum for a session beer should be 4.5 percent, an argument he has fought for years. Bryson takes his definition a step further, though. He also thinks that, in order to be considered a session beer, an ale or lager shouldn’t be too complex or intriguing in flavor – if you’re spending more time analyzing the oddball beer itself than having fun with your friends over a few pints, then the beer isn’t a session offering, Bryson claims. 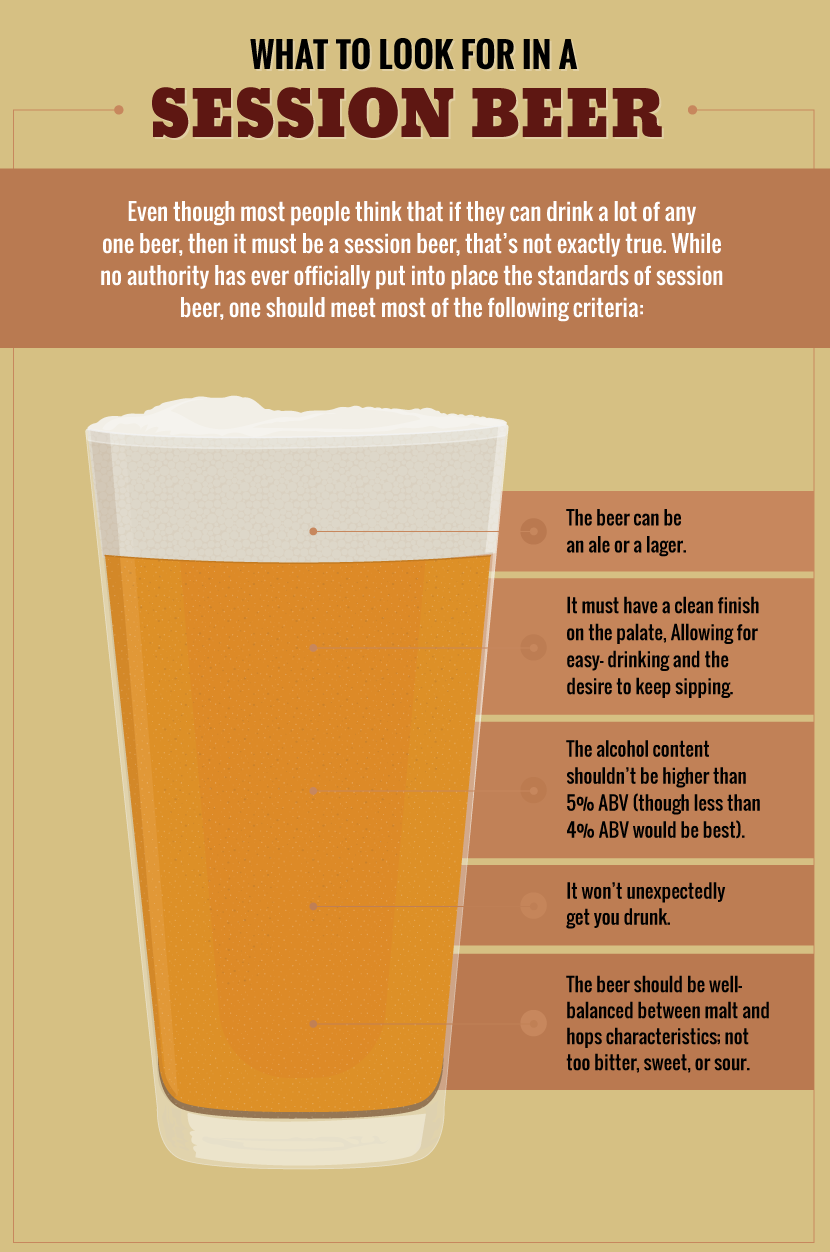 The Science of ABV

While beer nerds will casually toss around ABV numbers, your average drinker might not truly comprehend what they mean. Firstly, ABV stands for “alcohol by volume,” a measure of literally how much alcohol (i.e., ethanol) is in any given beverage.

ABV is not to be confused with ABW, alcohol by weight, which is sometimes used by brewers and occasionally in foreign countries. Though ABW can be calculated exactly by a complicated formula, it is most easily understood to be around four-fifths of the ABV.

Knowing this, we can understand how pure ethanol (i.e., Everclear) would be nearly 100 percent ABV – it can max out at around 95 percent, as a small percentage is burned off in the distillation process. Spirits are typically around 40 percent ABV, though they are often expressed as “proof,” a calculation that is simply a doubling of ABV (thus, a 100-proof whiskey is 50 percent ABV). Wines are usually around 14 percent ABV, while most of the major American light beers are around 4.2 percent ABV. Now you understand where session beers fit in the conversation.

To understand how the flavor of a beverage changes as its ABV rises, it helps to have a basic understand of fermentation. In layman’s terms, alcohol is created when yeast is added to a sugary solution. As yeast starts “eating” or metabolizing the sugars in, say, a crushed grape or mashed barley, alcohol is created. Thus, the higher the ABV, the thicker the body of it, too. A higher ABV also often leads to a “hotter” beer, one in which you can more easily detect the presence of ethanol on your palate.

A neophyte sees the bartender slowly pulling a pint of frothy, creamy, ink-black Guinness and natural assumes it is a “heavy” beer they probably want to avoid if they want to get home in one piece. Amazingly, though, that’s hardly the case – the famed Irish stout is a mere 4.2 percent ABV and, for most people, surprisingly sessionable.

Yes, color has absolutely nothing to do with the “lightness” or “heaviness” of any beer offerings. Though many folks assume the color of a beer is the easiest way to detect its ABV, flavor, complexity, richness, and even calorie count, that’s hardly the case. There are light-colored Belgian tripels that hit 10 percent in alcohol, while numerous dry stouts teeter under 4 percent.

The color of a beer is created by the color of its malts – nothing more, nothing less. People aren’t entirely wrong to judge a beer by its color, though, as many stouts are indeed rich and super boozy, while most of the yellowish pilsners and lagers we all love are indeed sessionable. One thing that is generally true, though, is that the higher a beer’s ABV, the higher the calories.

So don’t think it helps your diet to have just one of those 10 percent tripels. While Guinness might not be the “meal in a glass” many people have long claimed it is – at just 125 calories – that tripel, at a whopping 400 calories, certainly is!

Like most classic beer styles (again, see: IPA), the modern American craft beer movement of the past two decades has completely revitalized, modernized, and even bastardized what a session beer can be.

Think session lagers and pilsners have to be fizzy, yellow, and watery? Not true, as many of today’s craft lagers and pilsners use a flavorful all-grain base (corporate “lite” lagers/pilsners generally use cheap corn or rice) and are often even dry-hopped for added flavor and complexity.

Think session beers can’t be too hoppy? Try a session IPA, the paradoxical style that has arisen with abundance in the last few years. These beers are generally thin and lacking a firm malt backbone, but they still act as a satisfying bitterness “fix” for a hop head who has stuff to do later in the day.

Think session ales have to be balanced? Then you’ve yet to try this new breed of “kettle sours” – quickly produced wild ales that have often been dosed with bacteria such as Lactobacilius to create their intriguing flavors. Sour sessionables include once-classic German styles like the gose and Berliner weisse, which are now being exposed to a new audience. Today’s Americanized versions are often bracingly tart and may even contain fruit as well. Whatever the case, if you can handle the acidity, you can drink a whole bunch of them as they often reside around 3 percent ABV!

Written by Aaron Goldfarb – Aaron is an author, playwright, screenwriter, and blogger. He’s penned several books and between blogging and writing for Esquire and The Daily Beast, he spends his down time enjoying bourbon, craft beer, and Syracuse basketball.