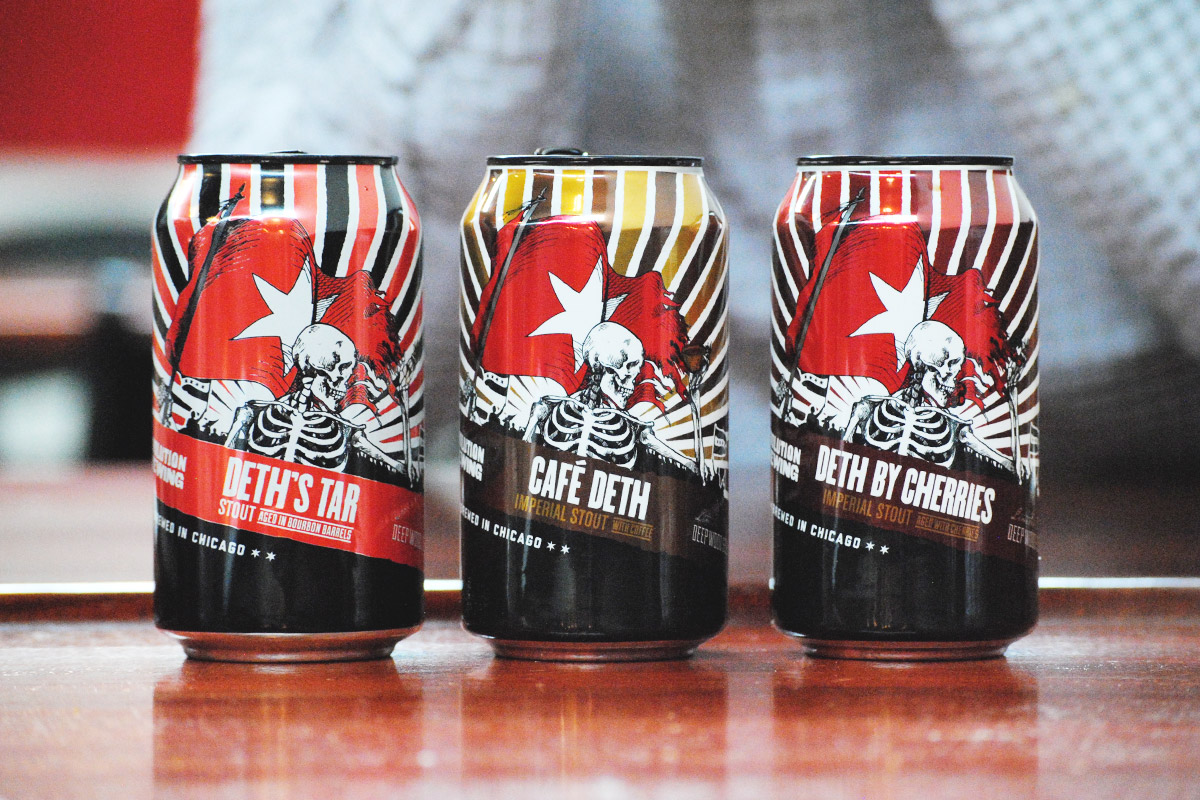 Revolution Brewing‘s barrel-aged Deep Wood Series has long set a high bar in the Chicago beer scene. Previously available sporadically throughout the year in 22oz bombers, the series has acted as a shining example of what can be achieved when a brewer puts some beer in an old barrel.

The latest release of Deep Wood marks the premier of Revolution’s foray into barrel-aged beer, packaged in cans. With no less than eight barrel-aged releases throughout the winter months, the brewery hopes to put more wood-aged beer in more people’s hands. We sat down with Founder Josh Deth, Head Brewer Jim Cibak and a few other Rev crew members to taste through the early offerings and hear more about why they made the switch to cans.

With glass bombers as the industry standard for high gravity barrel-aged beer, the team first highlighted the importance they place on making such a commitment to cans for these beers. As with most brewing, oxygen is the enemy, and Revolution has gone to extraordinary measures to ensure as little of it comes in contact with their beer as possible. Passing through a centrifuge and into CO2-washed barrels creates the purest beer possible as it hits the wood, according to Head Brewer, Jim Cibak. And the benefit of cans? Cibak says the total parts per million of oxygen in a can versus a bottle is, “Night and day, and the quality difference is undeniable.”

Those with cellars at home might appreciate the change as well. While Rev is sticking to their guns that their beer is ready to be drank as soon as they release it, consumers are going to age this beer. Having an easily split 4-pack to enjoy over time is going to be a big change in an industry where opening that large format bottle of something you’ve been saving for years can be quite the mental hurdle. Whatever you decide to do with yours, there’s no denying Revolution is changing the game in Chicago.

But none of this means much if the beers aren’t worth drinking. Check below for our impressions of the initial releases in the new Deep Wood Series, all aged and blended in an allotment of Elijah Craig, Woodford, Old Forester, and Heaven Hill Bourbon barrels, among others. 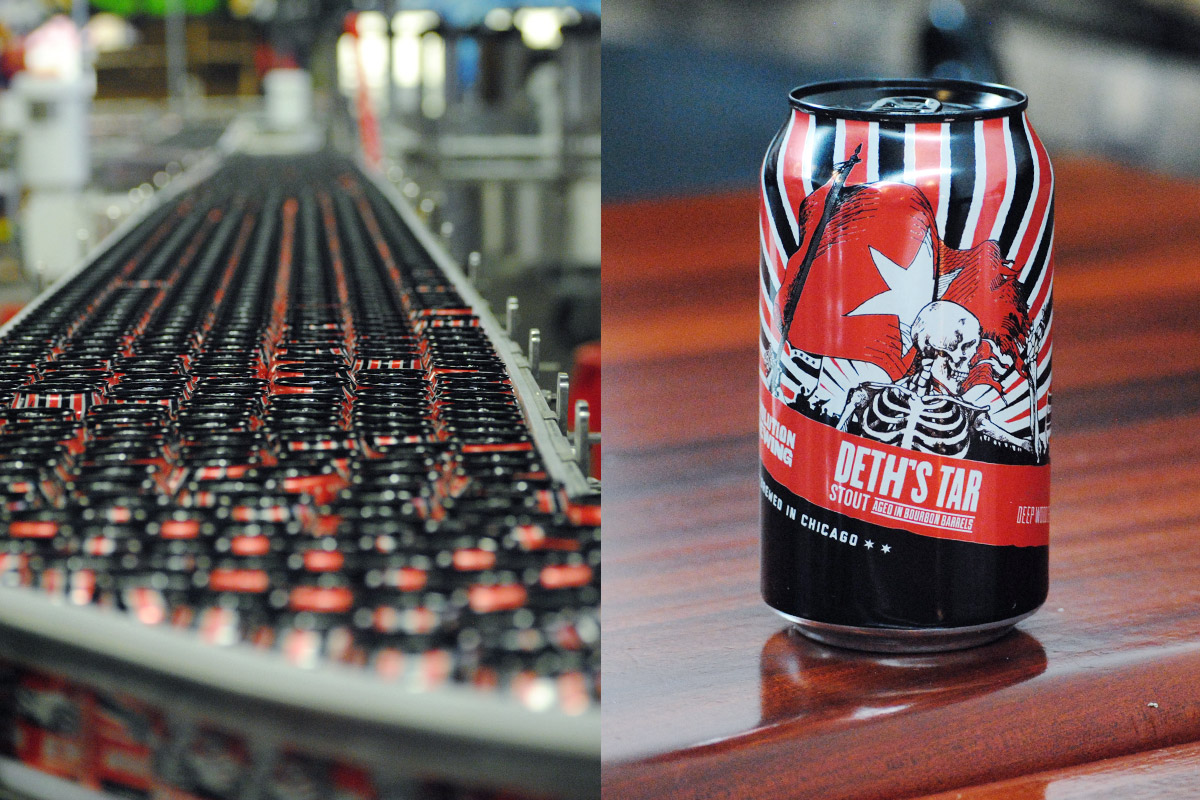 Revolutions flagship barrel-aged stout Deth’s Tar makes its first appearance in cans. While this will be the easiest one to find, it shouldn’t be overlooked. Unlike many other barrel-aged stouts, this is, at its base, an imperial oatmeal stout. Using English speciality malts and flaked oats in the boil, there’s a surprisingly smooth and approachable backbone to the aggressive 14.8% ABV beer. After spending 12 months in a barrel and just days in a can, Deth’s Tar is indeed ready to drink right now. [$25/4-pack SRP]

Using a blend of El Salvadorian and Ecuadorian beans from Chicago roasters Dark Matter and Gaslight, Café Deth is, you guessed it, Deth’s Tar with coffee. There’s an intense, dry, almost bitter chocolate roast on the nose that leaves no misconceptions about what you’re about to drink. Despite the strong coffee, that same smooth oatmeal stout base remains and even runs the same ABV at 14.8%. Deth’s Tar with coffee wasn’t likely to disappoint, and we’re pleased to report it’s a beautiful pick-me-up. [$30/4-pack SRP]

This is the one of the three we were most apprehensive about as we’ve experienced many a cherry stout that tastes a little too much like cough medicine. Unlike many where the cherry ups the sweetness of the stout to unbearable levels, Deth By Cherries is beer first, fruit second. Even more so than Café Deth, there’s no doubt you’re drinking Deth’s Tar, though with a mellow cherry fruit note that doesn’t overwhelm. One for those who want something a little different without straying to far from the tried and true. [$35/4-pack SRP]

The aforementioned three stout offerings will be available in Chicago beginning November 17 & 18, 2017 at Revolution’s Release Party. They will accompany four other Deth’s Tar variants, for a total of seven offerings available in the taproom these two days: Deth’s Tar, Café Deth, Vanilla Deth, Cocoa Deth, Deth by Cherries, Deth by Plum, Deth by Currant. After the release party, the three canned offerings will make their way into markets outside Illinois, with what beer may be left. 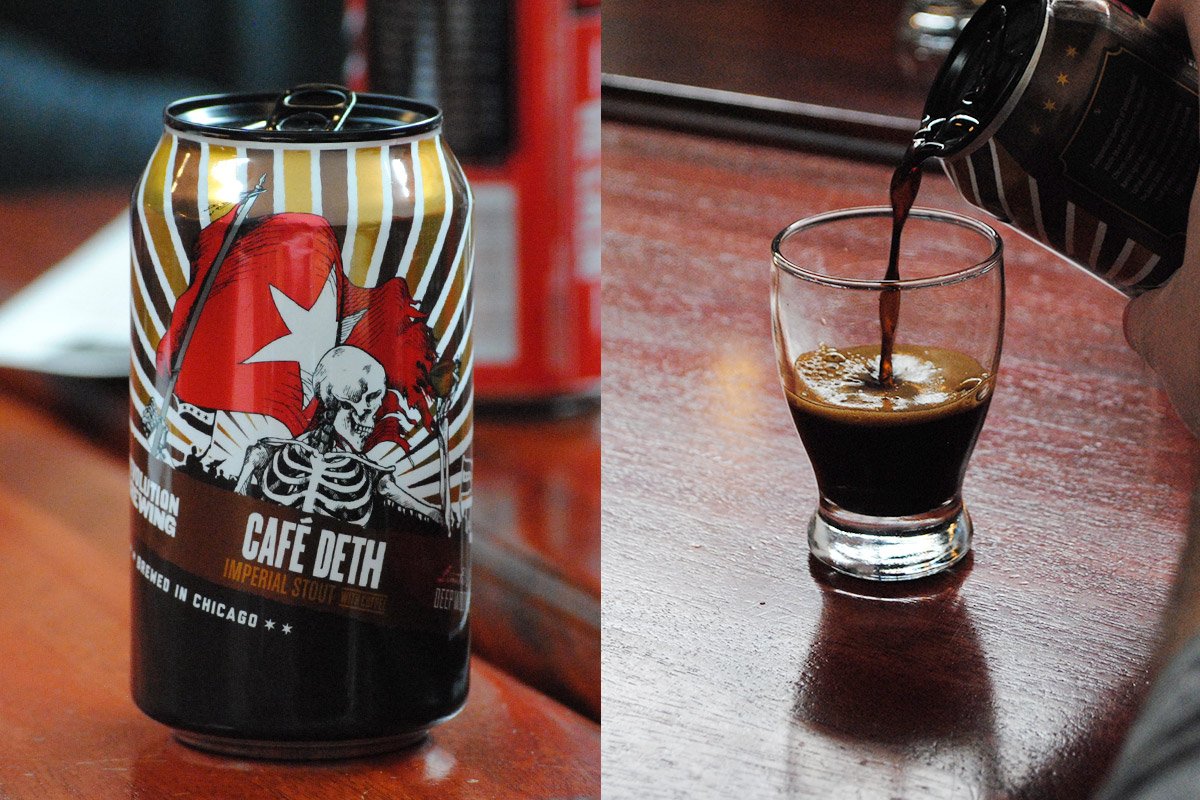 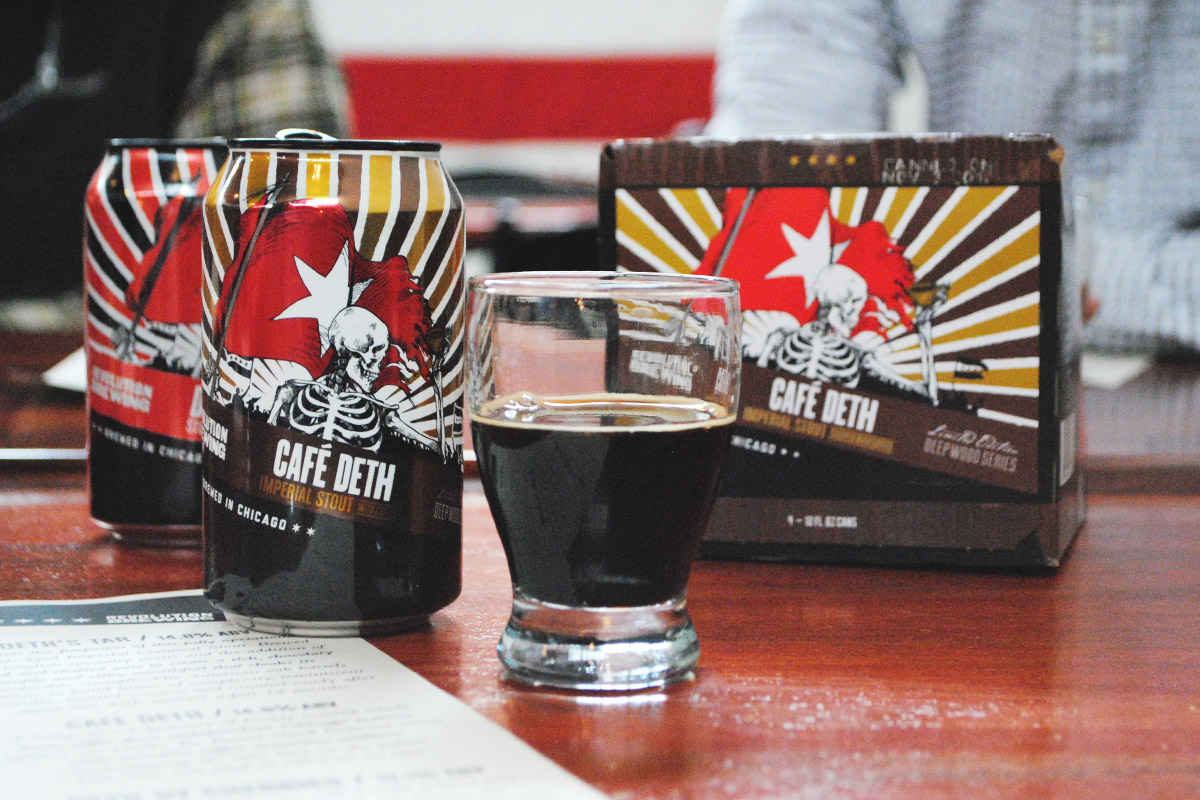 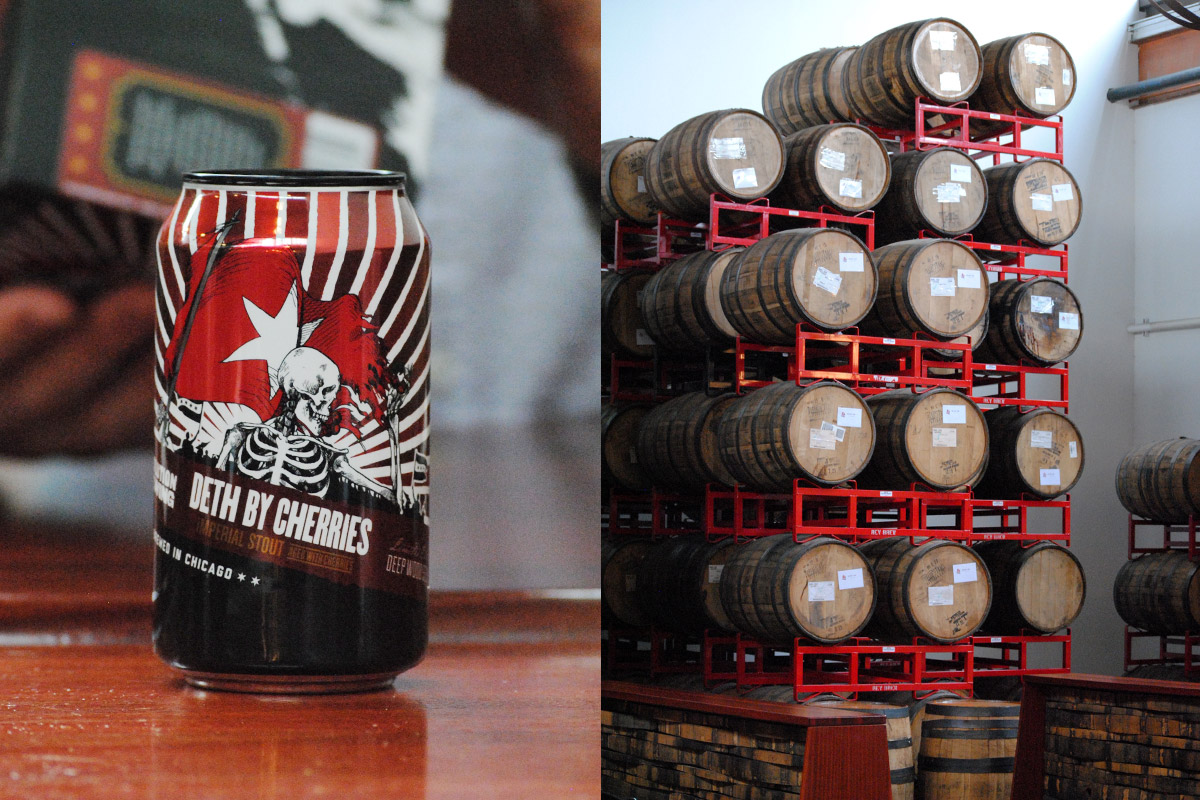 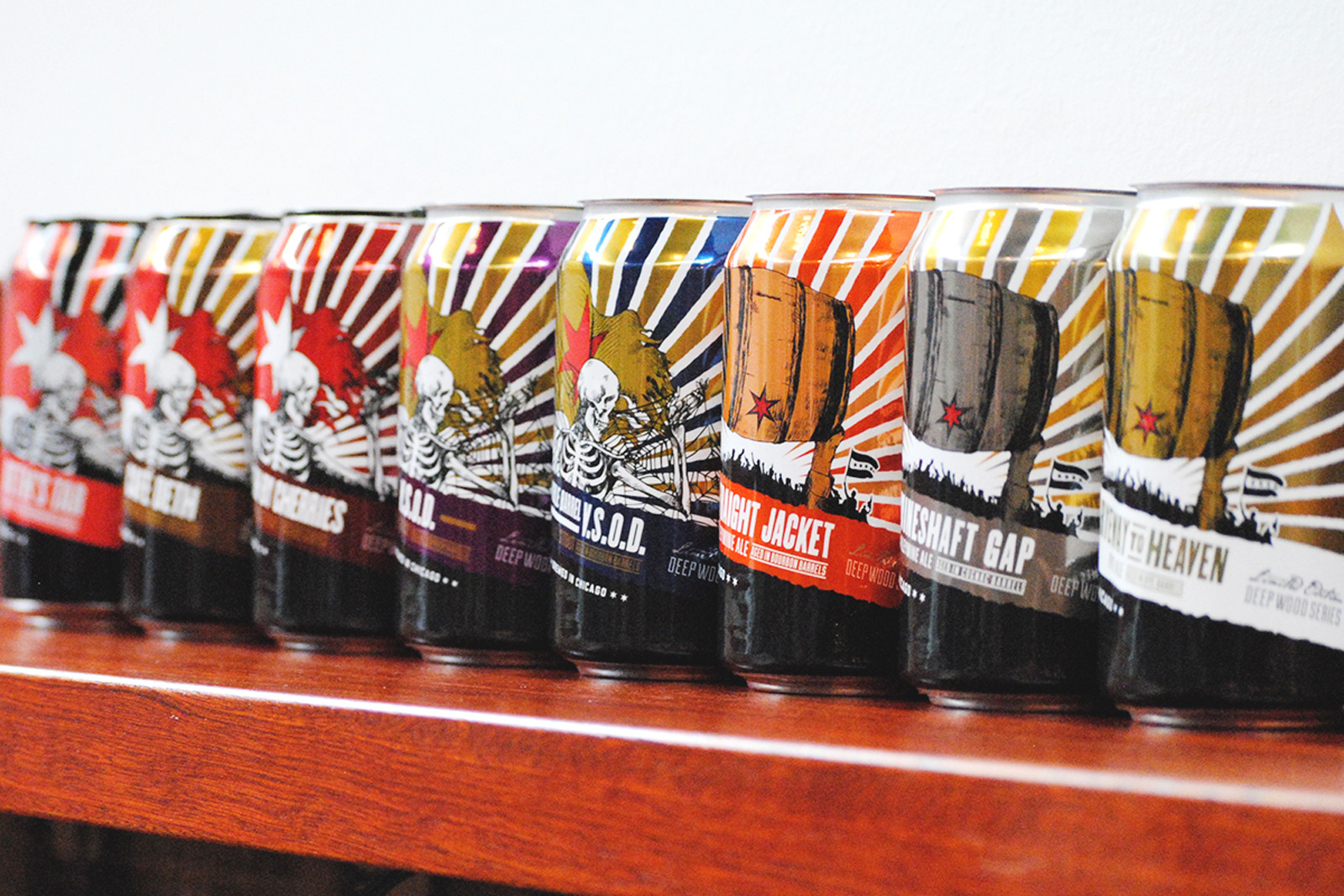 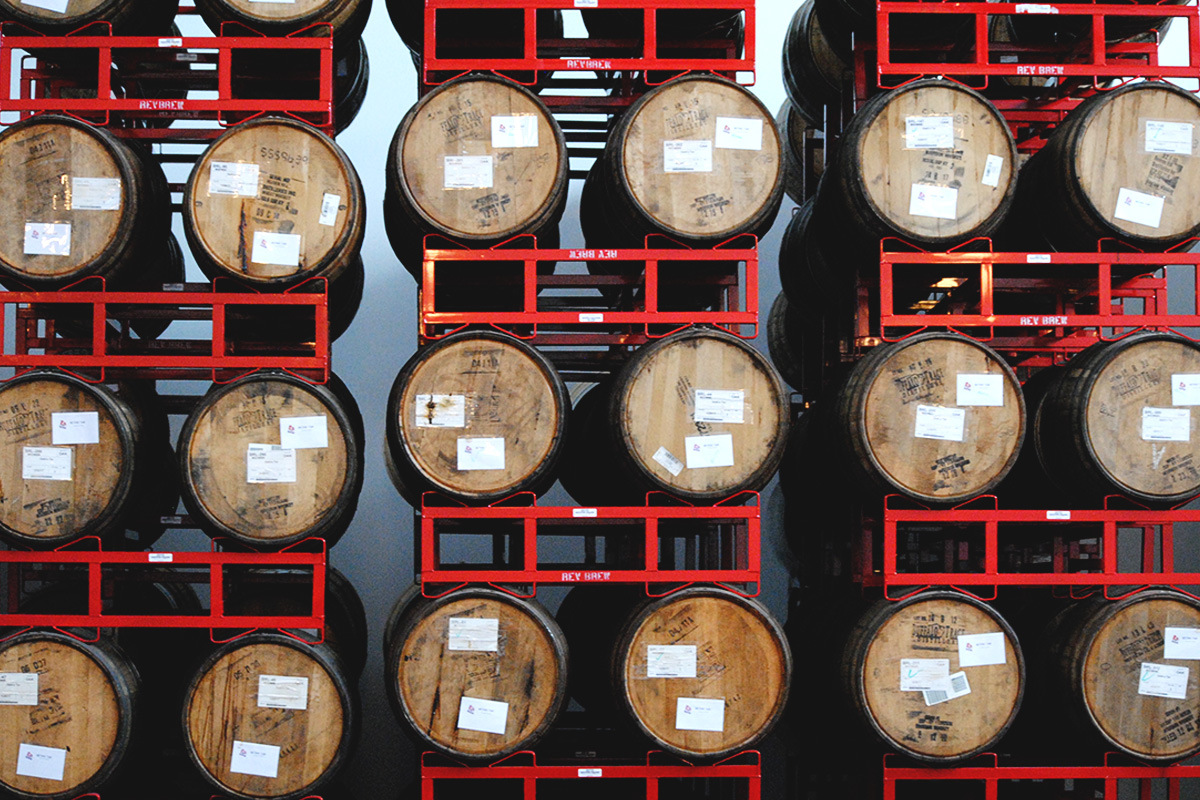 Thank you to the crew at Revolution for giving us a preview of their latest canned creations. Try their Deep Wood Series for yourself at their upcoming release party, and watch this space for more impressions and release info for the remainder of the series over the coming months.