We’ve tasted through the following 18 beers for July, and rated them according to our very own interpretation of the BJCP scoring guidelines, on a scale of 100 and listed in alphabetical order. This month, unique ingredients are front and center, kettle sours get some attention, barrel-aged beers are sticking around for summer, and…NEIPAs are still here. We considered aroma, appearance, flavor, mouthfeel, overall impression and trueness to style. It’s not an exact science–we know this. We just don’t like to pass on the opportunity to drink…more beer. Cheers! 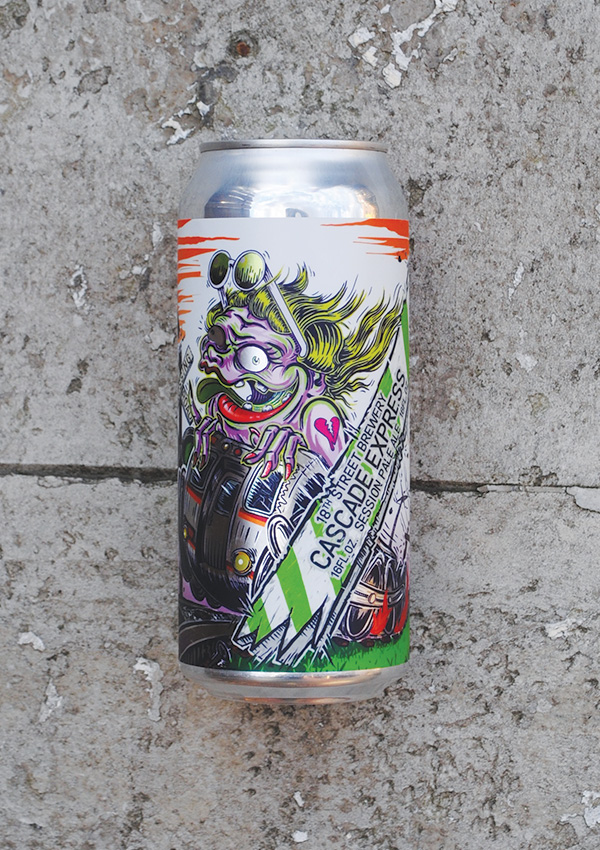 I’ve bought this beer before, but admittedly purely for the can art. 18th Street has been churning out more pale ales, ever since the opening of their second location. Cascade hops aren’t as sexy as others getting the attention these days [ahem…Citra, Mosaic…], but its nice to see it getting a showcase. This beer is a fine example of that. It’s grassy and crackery, with a tinge of the spicy citrus you expect from the hop. While ’18th’ has plenty of other, more impressive pales, this one is just fine, too. 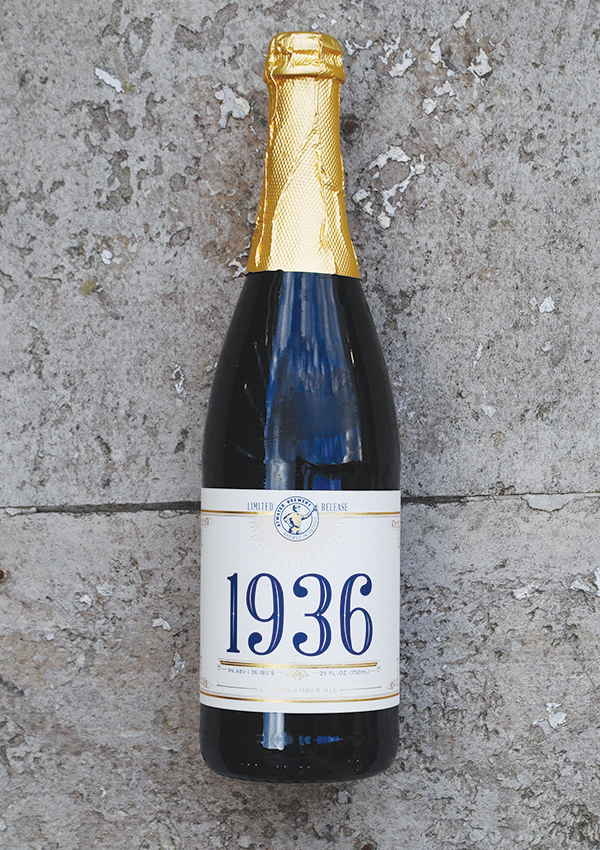 Detroit’s Atwater Brewery isn’t often releasing beers outside of 12 oz. format. So, when we saw this we were immediately intrigued. It’s a boozey 9% imperial red ale and once you pour it, there’s no mistaking this. It’s a rich amber color with a nice toasted head. While we weren’t sure about the satisfaction we’d get from drinking this on an 85 degree day, it was actually really pleasant. It’s malt forward for sure – caramely, oaky, and with a hint of dark fruit, but not enough to make it too sweet. 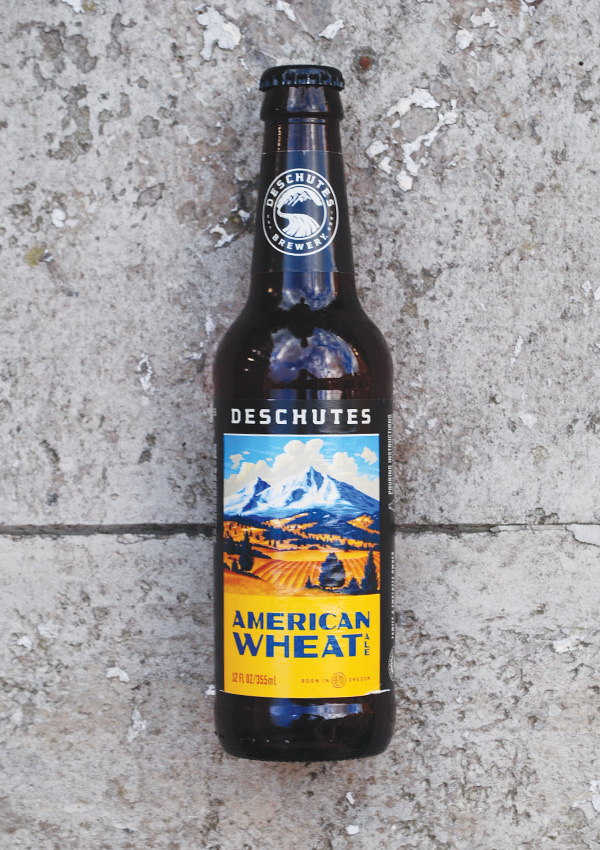 This is one of those beers you’re going to drink and struggle to remember if you liked it after. It’s an easy drinking wheat with mild biscuit malt flavors up front and a slight grapefruit citrus hop character on the backend that’s clearly designed for approachability. This by no means is a bad beer, but this style just doesn’t seem to turn the dial with most of today’s craft drinkers. Nevertheless, a serviceable summer sipper. 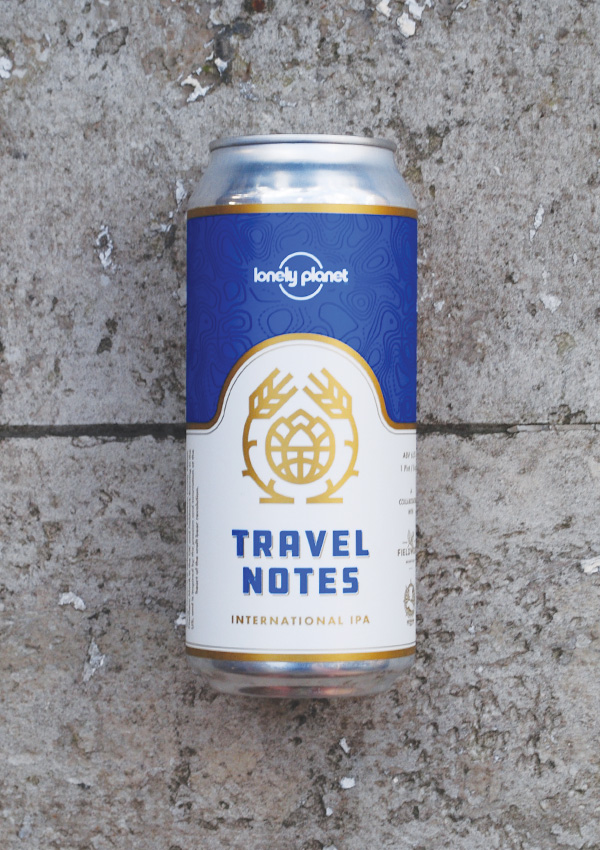 This is one of the more interesting beers I’ve ever had. Lonely Planet’s collab to promote their new book, Global Beer Tour, is truly an international IPA. With five ingredients sourced from five continents, this beer is complex. Fieldwork & Northern Monk teamed up to deliver this pink-hued açaí and citrus bomb. Grapefruit and guava are prominent, with a touch of tartness, among other surprises. 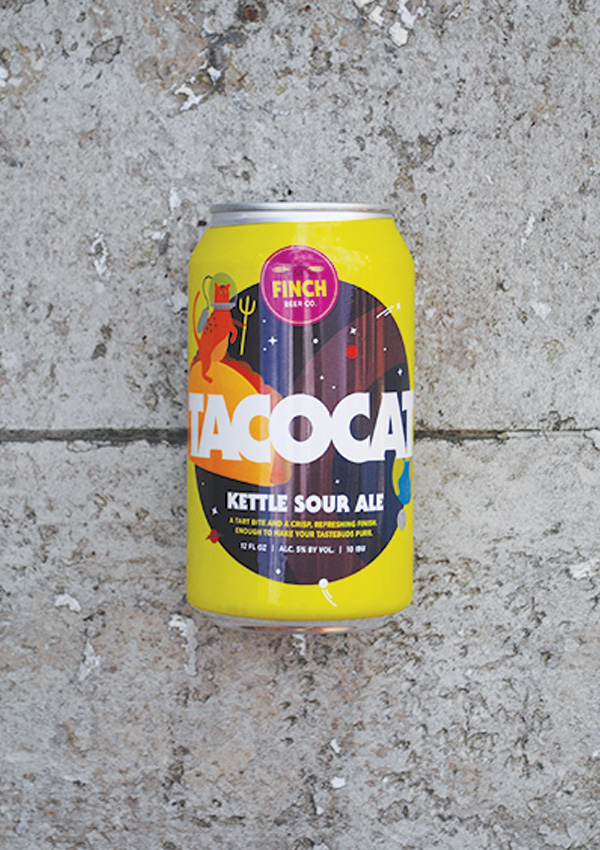 Is it third time’s a charm for the historically troubled ‘Finch Beer Co.’? With a whole new look and a fresh lineup of beers meant to put them back on the Chicago beer map, it does seem they finally have their feet under them. Tacocat is a to-the-point, un-fruited kettle sour that leans toward the puckering end for the style. As fans of canned, approachable kettle sours at this time of year, this is the first Finch beer we can recommend in a while. 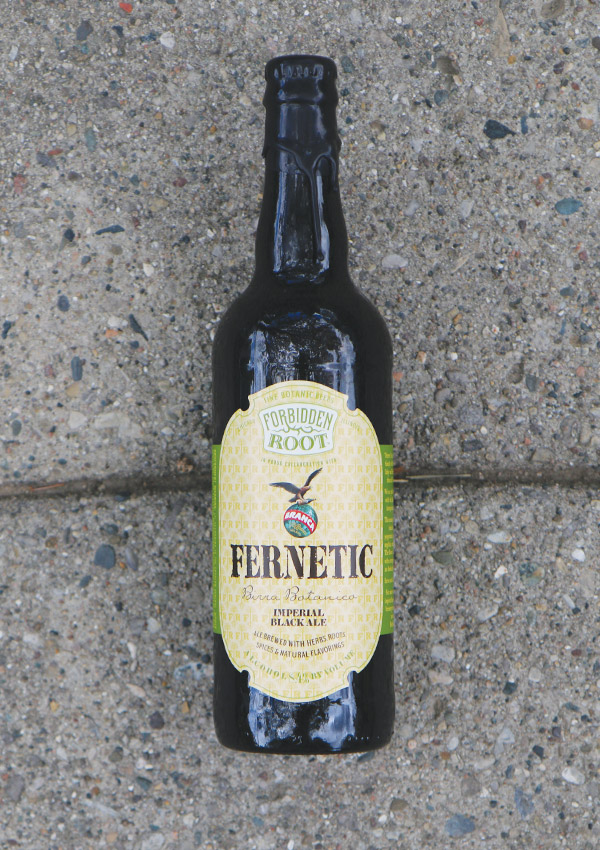 Forbidden Root has proven time and again its ability to use botanicals and unique ingredients in beer. In collaboration with Fernet-Branca they have created a black ale with all the nuances of the Italian spirit, but the aroma does not prepare you for the strong herbal notes that attack your tongue. Chicagoans will quickly draw comparison to Malort, with strong notes of anise and wormwood that can come off quite abrasive. While impressive in its use of ingredients, this brew may not appeal to the average drinker. 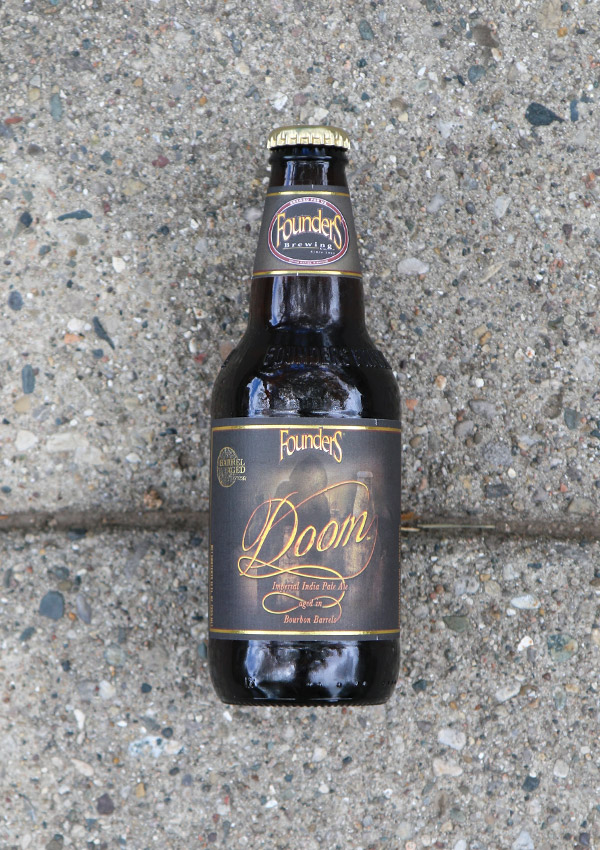 The latest in Founders’ Barrel Series, Doom is more reminiscent of a barley wine than an IPA. There is a great malt backbone that brings a sweetness and notes of caramel and toffee that plays nicely with hints of vanilla and oak from the barrel. It is all balanced by a nice pine and resin bitterness that reminds you it is still an IPA and help mutes the alcohol burn making for a scary drinkable 12.4% beer. 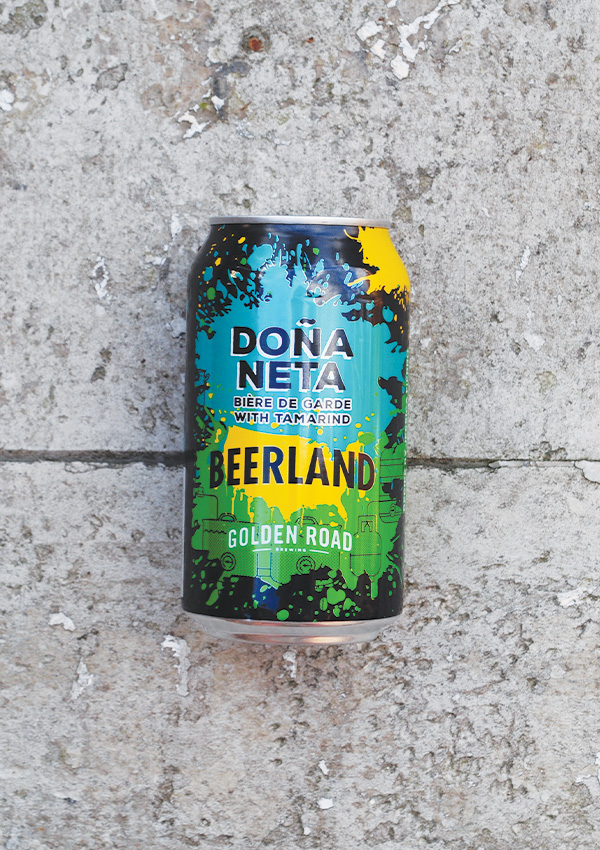 Some readers may be familiar with the brew-centric Viceland show Beerland, which followed Golden Road founder Meg Gill’s hunt for the “best home-brewer” in the land. Doña Neta, a sweet, biscuity Bière de Garde brewed with tamarind was the winning recipe and is now available in cans. This one is going to be polarizing. For us, it’s a great take on the style, though we’re not sure what tamarind really adds to it. Interesting but maybe a one-and-done. 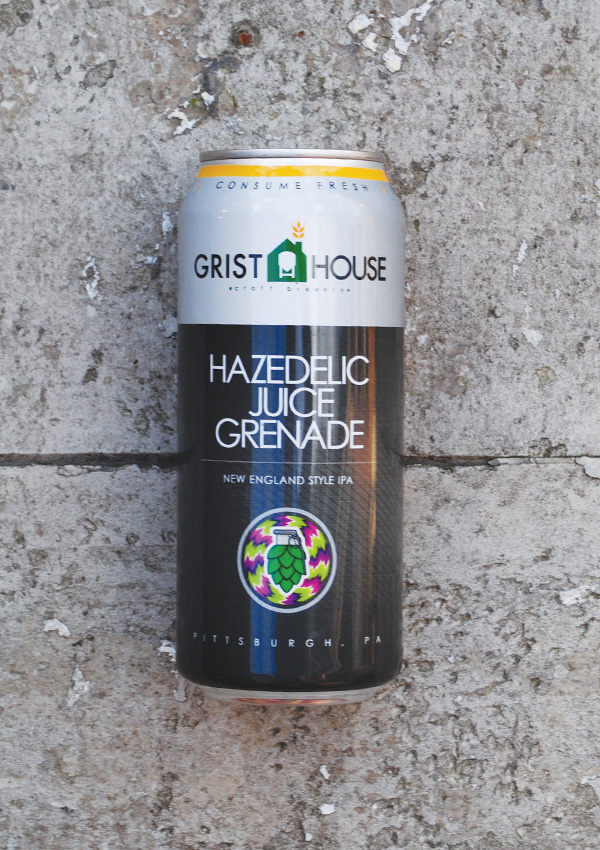 With so many ‘New England’ juice bombs on the market, it’s becoming harder and harder for opaque beers to stand apart. Thankfully, when your ‘bombed’ out, you can have a grenade instead. Grist House’s take on the style is far more balanced and enjoyable than most. Despite it’s name, it is actually much more along the lines of an approachable pale ale. It’s less ‘glass-of-juice’ and more ‘to-style’ India Pale Ale. It’s peachy, mango-y with a balanced hop bitterness and no lingering off-putting mouthfeel. And at just 6.2%, it’s enjoyable. 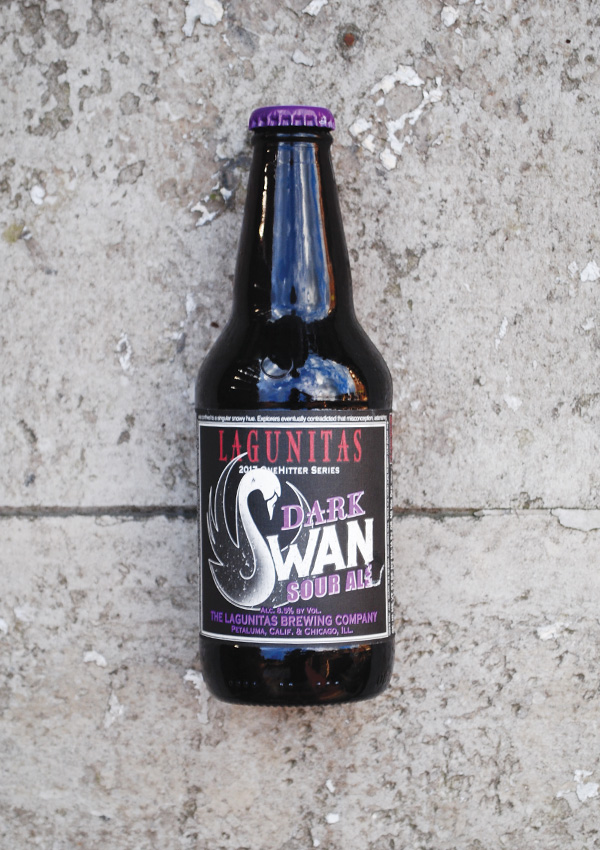 Ok, ‘dark sours’ don’t really get the excitement going. The style conjures images of dark fruits, heavy tannins and a not-very-refreshing sentiment. And having not had the fondest memories of this beer in the past, there was skepticism. However, for those on the market for a really easy drinking sour ale, this might be your ticket. It pours like grape/cranberry juice, but is far less dry than you’d expect. It’s brewed with Sirah juice, grape skins and a brand new Yakima Valley hop: Pekko. It may lack in body, but it’s certainly interesting. 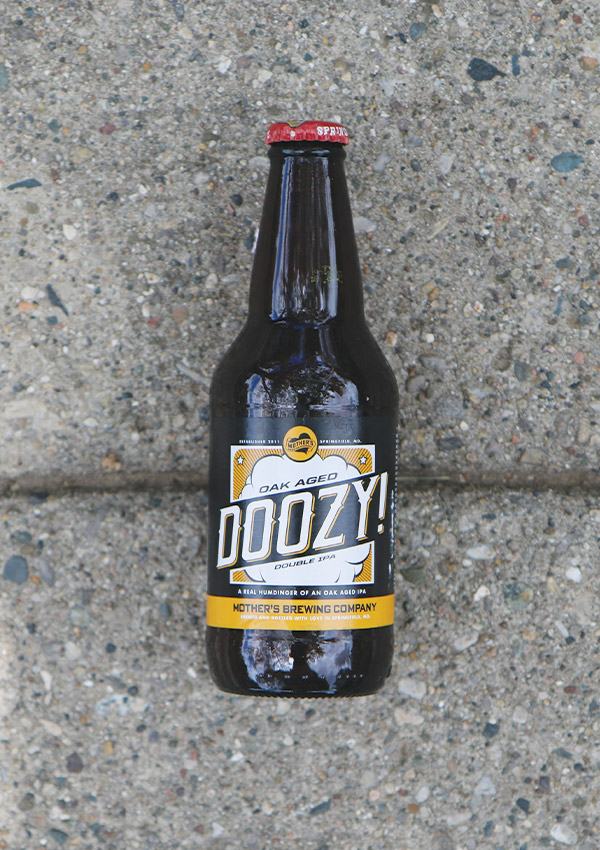 Hopped with citra and simcoe at all conceivable stages of the brewing process this double IPA is full of tropical hoppy notes in the nose and on the tongue. The oak aging balances the hop bitterness and smooths out the alcohol so you can keep going back for another sip, even if it is at 9.0% ABV. 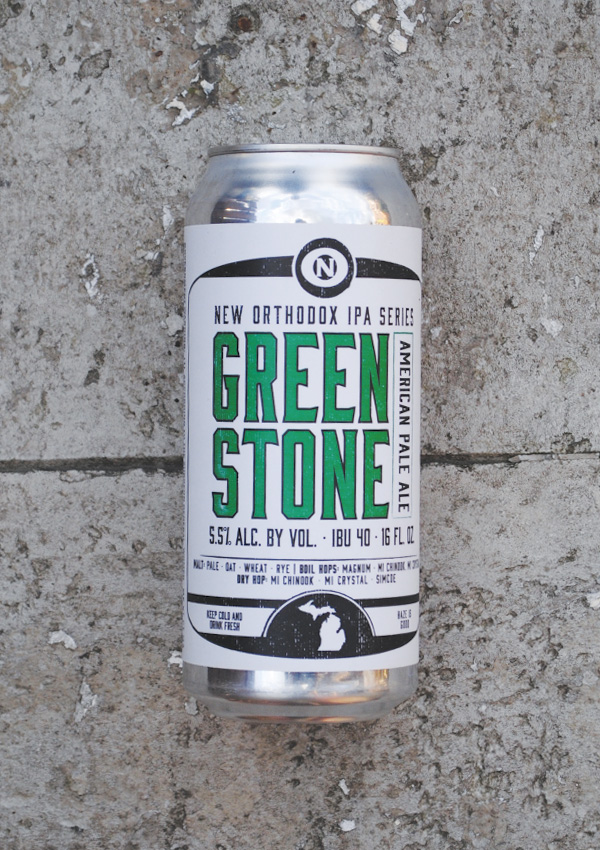 This is the latest release from the Michigan brewery that’s making a name for itself with their “New Orthodox IPA Series.” Greenstone, their lower ABV, easier drinking American Pale Ale addition to the lineup drinks as expected. Big dry-hop aromas, and a beautiful tropical hop taste make this surprisingly crushable. Still, we’d choose the much bigger, sweeter, and more tropical M-43, we reviewed last month if given the choice. 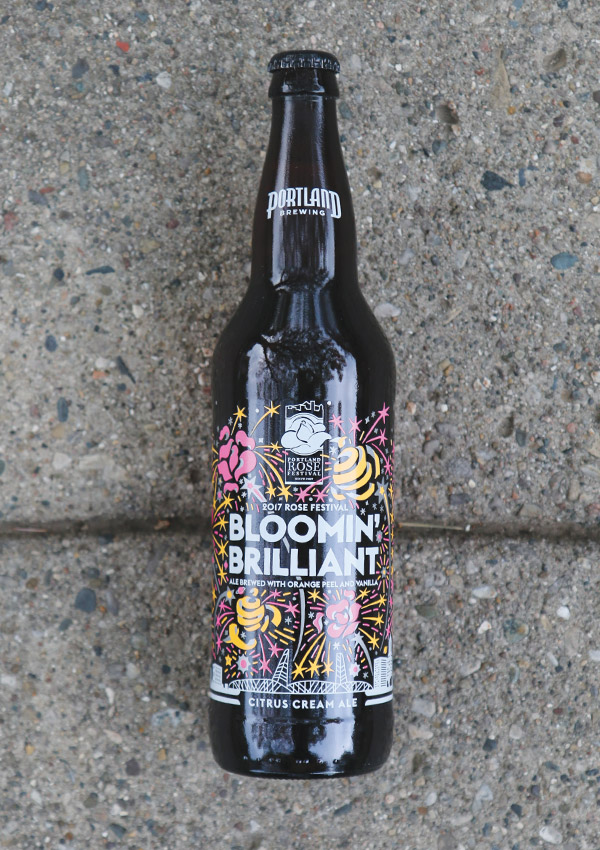 The classic cream ale is often overlooked in the craft industry, but seems to be picking up steam in 2017. In celebration of this years Rose Festival, Portland Brewing created a crystal clear beer that shines a beautiful golden orange. A light cracker, grassiness, citrus and vanilla are all in the aroma, but so is a skunkiness typical to the style. The initial reaction to the first sip was a orange cream cooler with nice vanilla notes. It never got too sweet making it very easy and enjoyable to drink the whole bomber in a single sitting. 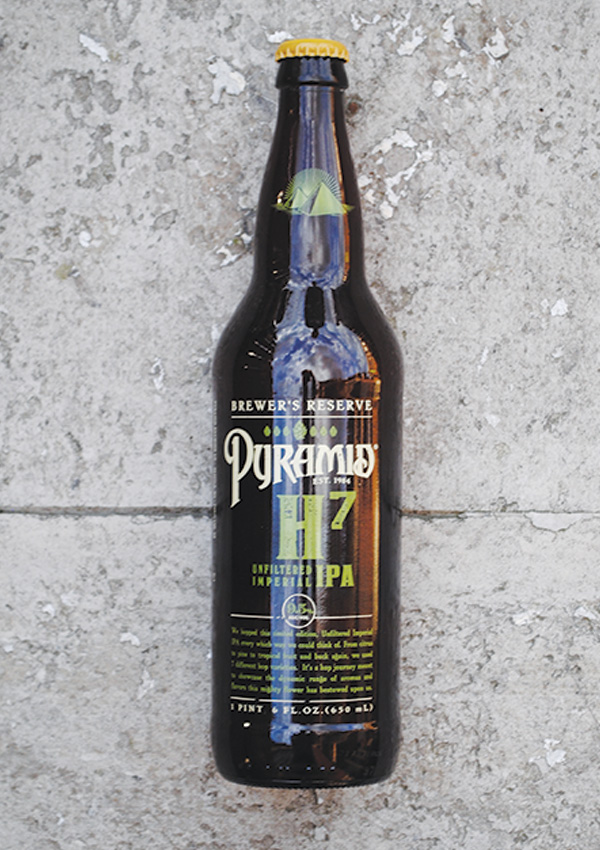 This imperial IPA out of the northwest is definitely big, showcasing 7 different hops between the boil and dryhopping, showcasing all things hops can bring to a beer, pine, resin, citrus and tropical fruits, but then the malt seems to take over. It ends up being overly sweet and boozy making it hard to finish in its packaged format. 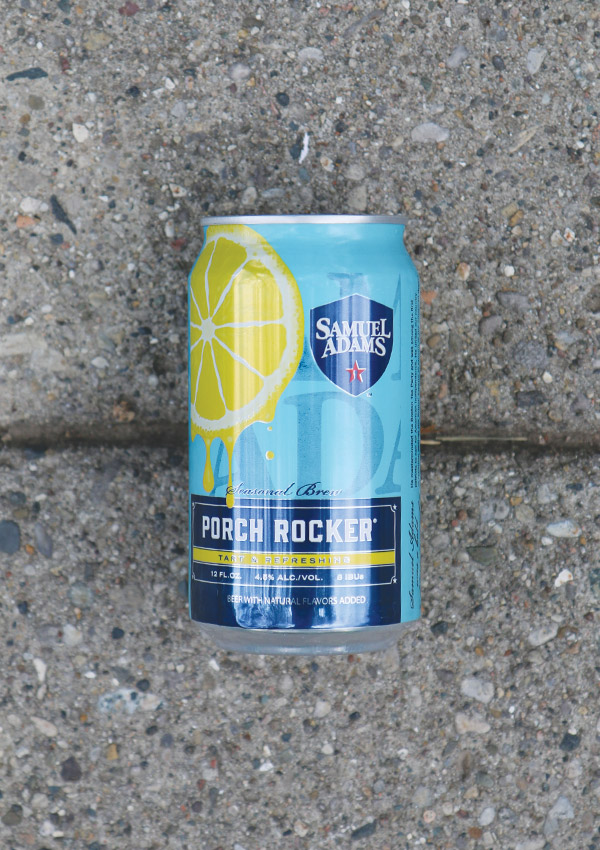 Sam Adams has decided to take on the summer drinking season with more beers than we can keep up with. Porch Rocker’s can claims no style, just that it is tart and refreshing, and that is exactly what it is. Brewed with the Bavarian Radler in mind, the aroma and flavor has massive notes of meyer lemon and granulated sugar to simulate the lemonade that was traditionally mixed with lager. Porch Rocker has just enough bite and finishes crisp making for one crushable summer brew. 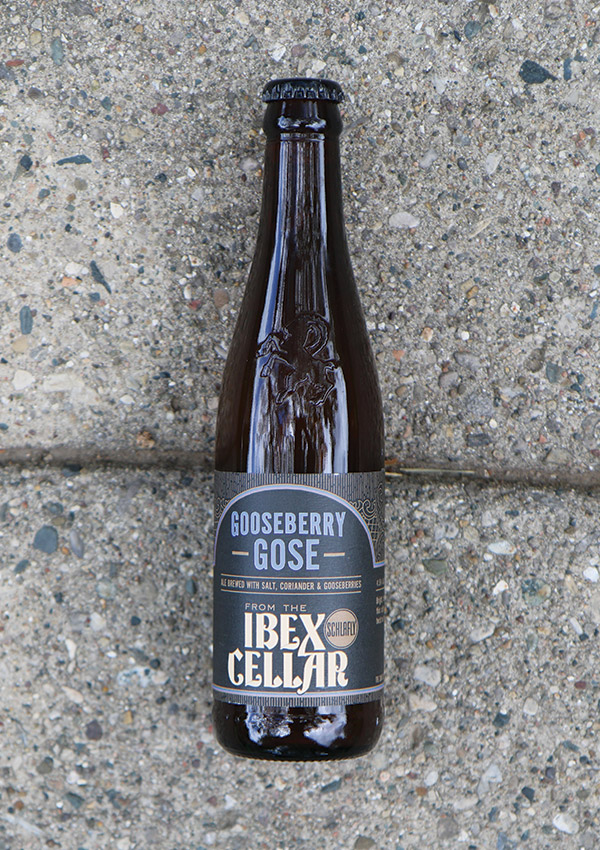 A wonderfully complex aroma that bring the funk with a tartness and an almost cheesy characteristic. We can’t claim to have ever had gooseberries, but there is a wild berry character that brings a tartness to a very pleasant mouthfeel full of lacto that coats the mouth, but then washes away to a salty crisp finish. White wine notes are present with lemon and citrus and a unique “meatiness” we can’t place, but that adds great complexity to a typically straight forward style. We look forward to more offerings from the Ibex Cellar. 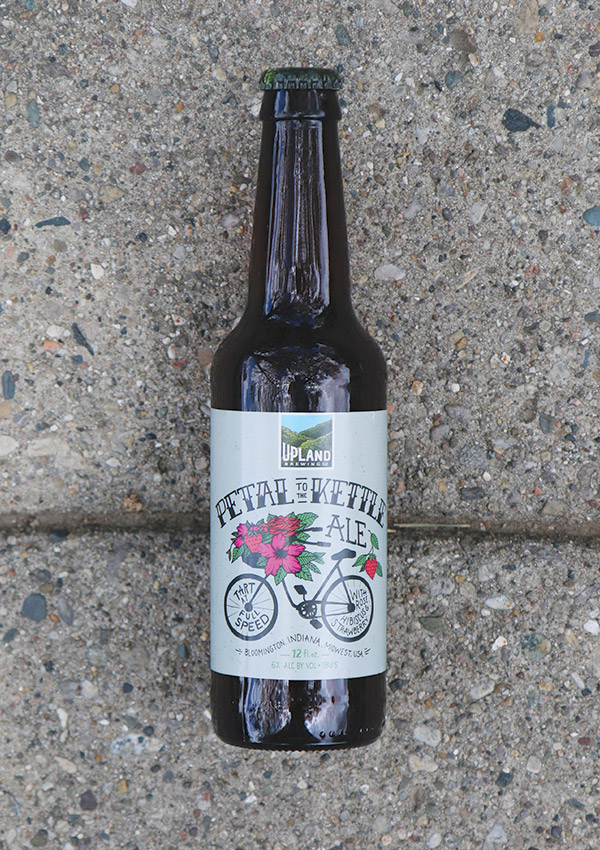 UPLAND
Petal to the Kettle

Upland has invested a lot of time and money into their barrel aged sours coming out of The Wood Shop, but this kettle sour lands just in time for summer. A dark rose hue with a light pink head, Petal has hints of fresh strawberries, which in our experience doesn’t typically work well in beer, but here it adds just enough sweetness and a little tartness to make it enjoyable. There is a nice floral bouquet from the hops and flowers added to the brew all making for a great beer for the season and especially for the white wine drinkers in your circle of friends. 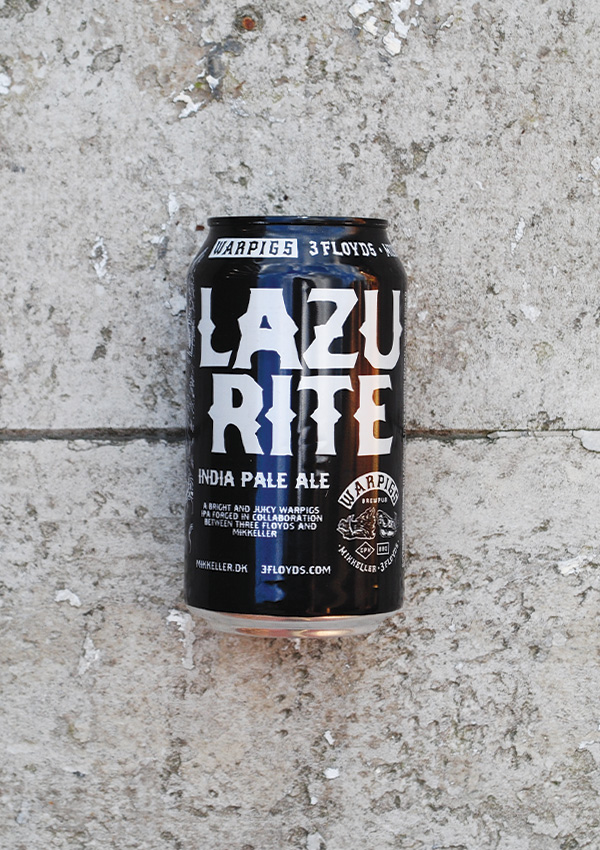 The 3 Floyds/Mikkeller collaboration brewery is finally available in Chicago, and they’re leading off with their flagship IPA, Lazurite. Pouring a hazy gold-orange, the aroma surprisingly isn’t anything to write home about. Once you take a sip, however, you’re hit with big grapefruit hop character up front and a substantial malt sweetness right at the end. Don’t let the black can and imposing label fool you — this is a well balanced, citrus IPA that’s perfect for the summer heat.