Interboro Spirits & Ales, based in East Williamsburg, caught the eyes of beer drinkers across the country for its Stay G-O-L-D collaboration with Run the Jewels. As co-founder Jesse Ferguson, pointed out, “They just wanted [the beer] to smell like weed.”

Ferguson, who managed independent rap label Def Jux, organized the collab with the rap duo. Stay G-O-L-D garnered Interboro national attention and brought intrigued craft beer lovers to the taproom. Ferguson understands from his days at a music label how to sell a lifestyle good. He also understands substance.

Jesse Ferguson helped found Carton Brewing in Atlantic Highlands, NJ and worked at Other Half before launching his own beer endeavor. At Interboro, he’s able to combine his technical knowledge of beer with his independent music foundation to create quality products that sell well in a challenging market.

Despite his long career in beer, he remains eager and curious at Interboro. Ferguson has thrown himself into distillation, a new side of alcohol production for him. It’s not only helped diversify Interboro’s options, but it’s also fueled Ferguson’s drive for experimentation.

JP: There are only a handful of craft breweries that also distill spirits, what led to your decision to open up as both a brewery and distillery?

JF: A lot of that is just the story of how Laura [Dierks, co-founder and owner] and I decided to open this place together. Laura and I met through my wife’s nephew and her neighbor. At the time, I was looking to see what I could possibly do in New York as opposed to being in New Jersey all the time. She had just come out of a situation where she had gotten involved in a local distillery and it hadn’t turned out the way she wanted. So she was researching how she could open her own distillery in New York. And so Dan, my wife’s nephew, said, “Well you should meet Laura, she wants to open a distillery. It’s not beer but it’s alcoholic beverages.” So we met and for like a year we just figured out whether we liked each other. And I didn’t know anything about distilling technically. I sort of taught her what brewing was about and she taught me what distilling was about. And we realized that all of this stuff could be done on the same equipment essentially. Other than needing a still.

We operate as an alternating premise so everything in here has an alternate use other than the still, the cold room, and the beer packaging. The still is 100% DSP and the cold room is 100% brewery. She figured out that we could actually do this. I was sure that someone was going to come along and say, “What do you think you’re doing? There’s a reason why no one else is doing this.” But she had a friend that’s actually one of our partners and he was able to float the idea to the NY SLA and they got back and said, “There’s no reason why you couldn’t do that.”

Once we realized that it was possible then we got excited that it would give us the ability to do something really cool and totally unique in New York City. Having spirits allows us to differentiate ourselves from the other mass of breweries that are opening. And for me, as a brewer, it was exciting to get into this with the expectation of learning something new. Adding the distillery portion has driven me in the same way that learning new things about beer has. New York is crazy because there’s an incredible amount of creative people making beer and a ton of competition. JP: So it opens up more opportunities than it inhibits.

JF: It definitely presents process constraints. We’re designating valuable square footage as a brewery to distilled spirits production. And we’ve already got a small space as it is. But the long-term value isn’t lost on us. We’re trying to build a brand that is meaningful to people. We’ll get a lot of dudes here with their phones out taking pictures of the beer they drink while their girlfriends, or wives, or mothers, or whoever are just sucking down gin and tonics and saying, “Thank you for having something besides beer.” So it gives us a little bit of a competitive edge. In the long run its all about quality products.

JP: Aside from being both a distillery and brewery, what defines and differentiates Interboro?

JF: We opened up and right away started trying to play the IPA game, because that’s what sells. And they’re good and I love IPAs. But I think that one of the things that differentiated us is that I have a track record. When we were opening, there were a lot of obstacles and roadblocks that we were able to avoid because of our experience in the industry. It’s what helped us get out of the blocks fast. We were able to avoid that learning curve.

JP: Well what’s great about that is, you have experience, you know the shit that needs to get done, but you’re also curious and eager to learn on the distilling side. You were curious.

JF: Yes, and what I learned right away when I was learning about distillation was that a lot of distillers don’t really pay attention to fermentation. So as a brewer, I felt like I had experience watching fermentation over the years. You watch fermentations fail, you watch them succeed. Succeed but not for the beer you were trying to make. So you learn a lot of the ins and outs of what it takes to make quality beer. Not what it takes to make a great IPA or a great stout. But what it takes to put good ingredients in and get good product out.

So for the first three years that we were at Carton, everything was about transitioning from being a homebrewer to a production brewer. Understanding that the beers that we made that tasted like shit should go down the drain. And that was a steep learning curve because as a homebrewer you’re like, “Well maybe I’ll drink it.” But as a production brewer, as someone that now has a brand that you want to support your family with…[you dump it]. 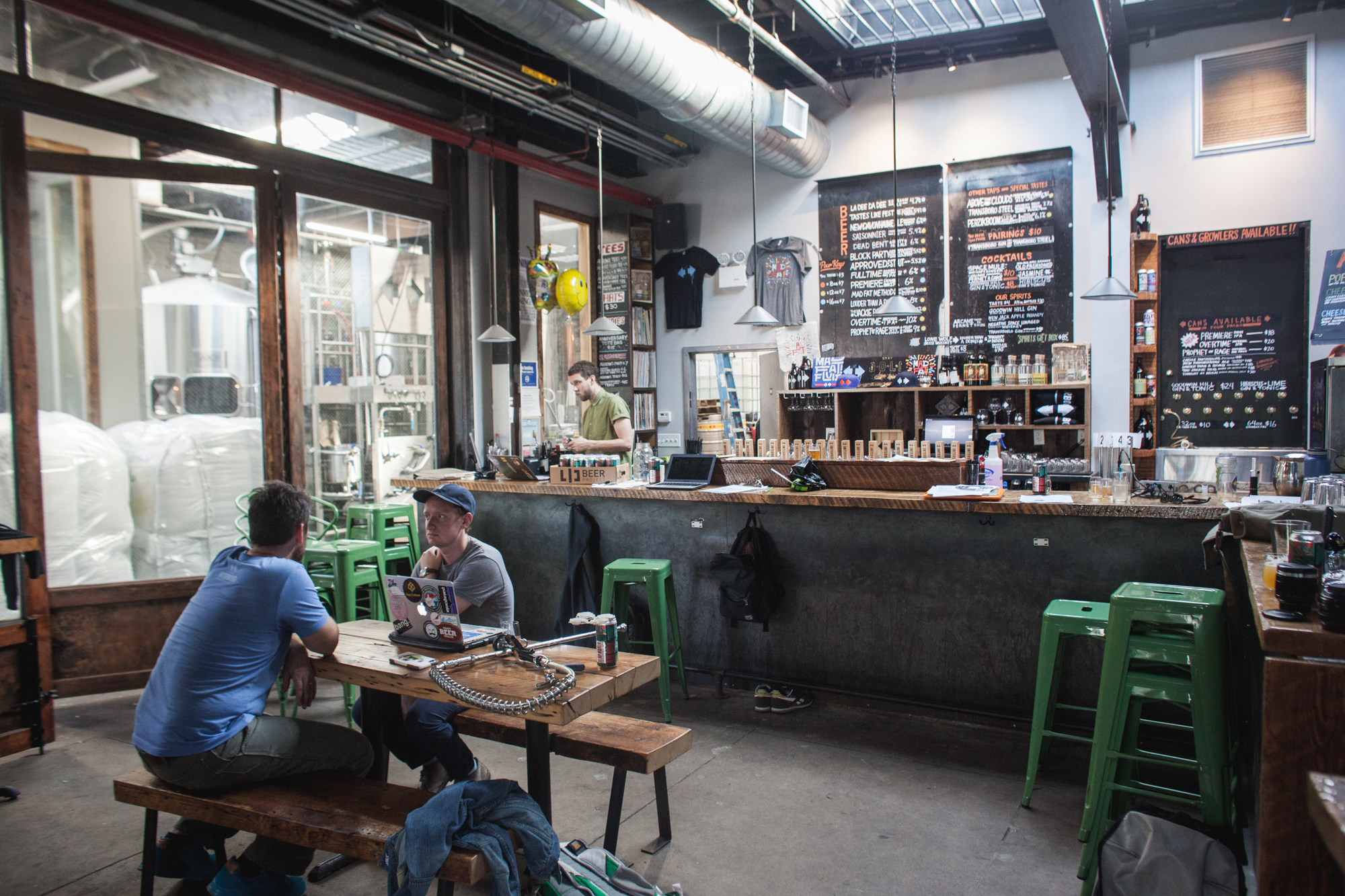 JP: A lot of the branding and aesthetic of the brewery is music related. What does your background at a music label bring to Interboro?

JF: I think they’re both lifestyle marketing. It’s niche stuff where you’re selling people something that they can identify with. They want it to be premium. Sunglasses, hoodies, sneakers, jeans, whatever, that’s what beer has become in a lot of ways. It’s a way to project to your friends who you are.

That’s what I saw back in 2007, that was what beer was becoming. Whether it was alcohol or food, what you consume becomes a projection of how you want people to see you. Especially in the world of social media. So having worked in music it just felt natural. I worked in an independent rap label where we were selling very tiny amounts of music. But we were selling enough that people could pay their bills. And the record label went out of business because of mp3s and bootlegs. And you can’t bootleg a beer brand.

Craft beer now means being aware and being a fan of something that is eclectic, and limited. It taps into that same thing where if you’re walking down the street and you see someone wearing a t-shirt of your favorite band or your favorite beer you see them and you’re like, “Oh I identify with you.” And so those are the things I brought with me. And then the “Stay Gold” thing, that was something I wanted to do for awhile. JP: Did you know Run the Jewels from before?

Related Reads
People
Meet New Jersey's Best New Brewery, The Seed: A Living Beer Project
People
How One Company is Revolutionizing Brewing Technology
People
The Story Behind Voodoo good vibes IPA
JF: Yea, so the label was owned by El-P and his manager. I had wanted to do something with them for awhile and it just never worked out. And it’s huge because we don’t spend any money on marketing. We print off labels for cans and we do social media. So we worked out a deal with them that spread the word about our brand and our beers even though our stuff is only available in New York City. It just feeds into that awareness. I mean the goal for us is that if you come into New York City we want to be in the top 3 spots you want to visit.

JP: Would you want to do a direct collaboration with an artist again?

JF: Yes. It would have to be someone that we’re all really into and excited about. It’s also time-consuming.

JP: Did Run the Jewels have any input on the beer?

JF: They just wanted it to smell like weed. I sent them a bunch of IPAs and they were like these are all good, but none of them smell enough like weed.

JP: Do they drink beer? Were they into it?

JF: They’re like, sort of into beer. It’s really their manager Amaechi, who’s more into beer. And then another guy who works at their label. JP: You have a really good perspective on craft distilling and craft beer in New York. How have you seen those scenes grow and where do you think they are right now?

JF: The spirit scene in New York seems a little bit fractured and hasn’t really coalesced. I think a lot of that has to do with how people consume spirits and also that spirits are so dominated by Diageo brands and whoever. The whole sort of local spirits movement is just getting its wings.

The beer scene, on the other hand, is super vibrant and there are a lot of really smart people out here who’re making beer. I’ll go to other cities and I don’t think that the brewers are as connected as they are here. But I think it’s such a young brewing scene here. If you look back 10 years ago there were like 4 breweries maybe and now there’s at least 20. A lot of people have worked together at different places, a lot of people drank each other’s beer before they opened their own places. A lot of people collaborate with each other. Most people in this market have a rising tide raises all ships point of view.

Which is definitely the attitude we had in independent music. We always thought that if one of the other independent labels blew up, it’d make people want to listen to our guys.

At the wholesale level there’s a finite number of places to sell beer. But in the long run…I mean Grimm’s going to open up 2 blocks away from here and we’re all counting the days. It’s just going to bring more people to our neighborhood and more awareness to our brand. And Other Half drawing people out of town every weekend for cans means that people are here. And if they know there’s another brewery that has good beer they’ll come check it out. And KCBC opened up like a week or 2 before us and we did a collab with them and they came here and did one with us. If they need grain they’ll call me and see if I have any to spare, if we need yeast we’ll go over there to get yeast. There’s just a lot of interconnectivity and a lot of people have known each other for a long time. It’s a very open source community; in the brewing community it’s a small world. It’s a cool place to brew beer.