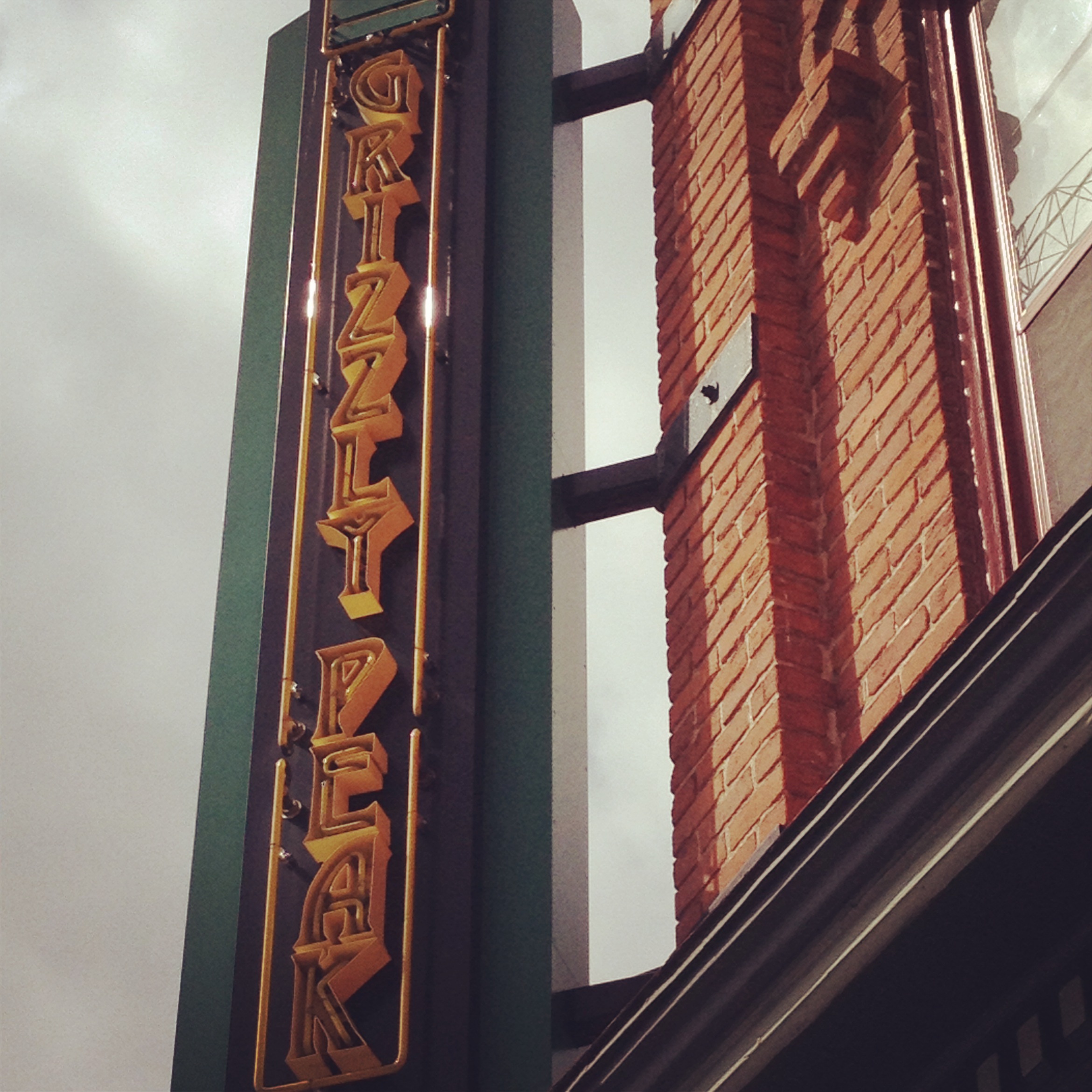 A drizzly spring train ride from Chicago put me back in the Mitten for a few days. Even with a surprisingly on-time Amtrak schedule, I had already decided on the need for a beer when I got into town. Thankfully, “A Squared” has plenty of options from which to choose, and we quickly found ourselves on Main Street.

Having already tried (and loved) the city’s famed Jolly Pumpkin Brewery, we opted for a lesser famed establishment. Enter: Grizzly Peak Brewing Company. Although situated on the corner of Washington Street, just 1 block from the Main Street drag, the place was surprisingly quiet for a weekday lunch period. Still, it seemed cozy enough for a brewpub, like many of Ann Arbor’s downtown restaurants, pubs & shops.

I’ll have to say up front, that unfortunately the food was somewhat underwhelming and lacking presentation. Besides, we’re here to talk beer – the main objective of the visit. And what better way to dive into a new-to-you brewery’s offering than ordering a flight? Right, there is no better way. ‘Two flights, please.’

5 tastes: Victors’ Gold, Grizzly Peak Pale Ale, Steelhead Red, County Cork Irish Stout, & Fool’s Brew Pale Ale. Flights are always exciting. A smattering of the brewery’s proudest offerings. Selected and paired to give you all of the best tastings. However, this flight didn’t quite fit that criteria, in my humble opinion. Starting off with the Victors’ Gold (I thought it was called ‘Maize’ in these parts?). An unsettling tinny residual taste. On to the Grizzly Peak Pale Ale. To combat my sweeping comment on the flight’s impression as a whole, I actually enjoyed this one. They are calling this one an American Pale Ale, with a dry finish; that I do agree with. Easy drinking, staple pale ale utilizing Cascade hops. Next was the Steelhead Red. Sadly, my least favorite of the batch. I always want to find a Red that I enjoy, but this was not one to fit the bill. The Steelhead had an unsettling bitter taste and totally missed on the ‘caramel bouquet’ it was said to have in the menu description.

The last two 4.5 oz glasses on the plank to be tasted were the County Cork Irish Stout & Fool’s Brew Pale Ale. Again, most of us here at the Hop Review don’t consider ourselves regular stout drinkers, but we’re always open to a variety of brews. With that said, I don’t think they will be drinking this stout in Cork County anytime soon. It just seemed to lack any distinctive flavor, even as a nitrogen-dispensed stout – the creaminess wasn’t there. The Fool’s Brew (as I think I remember it being dubbed by the waiter – it wasn’t listed on the menu anywhere, so maybe I’m the Fool here) was possibly the most disappointing of the bunch. Recommended as an extra hoppy seasonal offering, I had to include it in my flight as my ‘flex’ option. And it seemed fitting that it was last on the board, since it was the one I was most excited to try. Unfortunately, it seemed it ended up last for another reason: because I didn’t even finish it. I couldn’t quite peg this one, but it just tasted off.

I’ll spare anymore disappointedness. That’s not the goal here. And heck, it could’ve been just an off-day, or couple of batches – the place seemed charming enough, and that’s coming from a Spartan in Wolverine territory. But Grizzly Peak left me wishing I’d just headed the other way down Main, towards good ‘ol Jolly Pumpkin and their $25 beers.

Until next time, Ann Arbor. Maybe Arbor Brewing is next on tap…