Last month Hopcat, one of the country’s best bars – from Grand Rapids, MI – sprouted it’s second location in East Lansing. Unfortunately we couldn’t make it back for the grand opening but John Page, good friend and fellow Spartan, offered to share his experiences at the record breaking event.

When I was first getting into craft beer about five years ago, Crunchy’s in East Lansing, MI was where I would go if I needed my fix. The Michigan State University dimly lit, hole-in-the-wall, karaoke staple has about 25 always-rotating taps offering many distinct beers, ciders or meads. Before I go I impulsively check the tap list on the web and pick out the libation I will try first, second, third…and so on. Eventually, I caught wind of a bar, HopCat in Grand Rapids that offered 100 craft beers. Crunchy’s times four! I went, it was fantastic; but drove back home resigned to the fate of having Crunchy’s as my go-to for craft beer in the Lansing area.

Fast-forward three years. HopCat Grand Rapids has acquired plenty of national and world-wide praise as a top “beer bar” – including the most recent finish as #2 Best Craft Beer Bar in the US, as voted by the Brewers Association and CraftBeer.com. And HopCat announced their second location in a new development right smack in downtown East Lansing. Crunchy’s, you will always hold a special place in my Spartan heart, but there is no competing with this.

HopCat East Lansing opened August 22nd and I felt like a kid waiting for Christmas morning. Shortly before the opening, HopCat unveiled plans to hold the largest tap takeover ever, adding to the anticipation. One hundred distinct Short’s Brewing beers would be on tap for the opening. The night before, the first person got in line at the corner of Grove & Albert streets around 9:30 p.m. The morning of the opening, while I was at work, I was searching Instagram with every #hopcat hash tag there was, and found out the line was reaching epic proportions. The National Guard and the Anti-Couch Burning Unit of the ELPD had to help wrangle the famished, feverish crowd into some semblance of a line. When I got out of work my wife and I drove by, saw the sea of humanity, and decided it just sadly wasn’t going to happen. We got a drink at another East Lansing staple watering hole, Peanut Barrel, with the other HopCat rejects. On our way home, we saw the line had inexplicably shrunk down to a reasonable few dozen, and hopped in…for the long haul. One hour, forty-six minutes and thirty-five seconds later: we were in.

Inside, we put our names on the waitlist (they text you when your table is ready) and bee-lined it to a huge wooden bar with beer labels set on the countertop, circling the 100 taps. There is also an upstairs area with ample seating and another bar with twenty of the beers that won’t be regularly rotated. The most impressive thing about the bar was how great the service was. With hundreds of thirsty patrons, and seemingly most of them crowding around the bar, we only waited a few minutes until we had our first glasses of delicious Shorts brew in our mitts. To give everyone a chance to try as many of the exclusive Shorts brews pours were limited to four or eight ounces, an even greater testament to the service we received.

After agonizing over the menu, I settled on a beer I’ve wanted to try for a while: Short’s Anniversary Ale; a high-gravity wheatwine brewed with blood oranges. This was my favorite of the night. At 10% ABV, it would seem like a sipper, but instead very easy to drink and amazingly smooth. Oranges dominate here, but they’re not overpowering. I can’t say I’ve tried many wheatwines, but this is a style I’ll seek out in the future.

Next up was Short’s The Woodmaster, another high-ABV, double brown ale clocking in at 9.5%. Brewed with pecans and maple syrup, it’s a very sweet beer that is decent for the first few sips, but for me wears out its welcome near the end. Too cloying, the maple syrup comes through prominently and leaves not much else to taste. Not awful, just not for me. Another Short’s brew I’ve been wanting to try was the Publican Imperial Porter. Porters are always a bit hit-or-miss for me. Some can go overboard with the smokiness, and that was the case with this one. Overall, very good for 9% ABV, but I wouldn’t reach for it first.

Mr. Biscuits was next in line, because, well, it’s called ‘Mr. Biscuits.’ It’s described as a “reddish brown American ale layered with biscuity malt characteristics, fruity yeast esters, and slight nutty aromas.” Unfortunately, this was my fifth pour (my wife’s friend was not a fan of The Liberator, a double IPA, which I enthusiastically poured down my gullet) so my memory does not serve me well, and neither do my notes. A simple “knjice” is keyed into my phone’s note taking application, which I assume means “nice.” 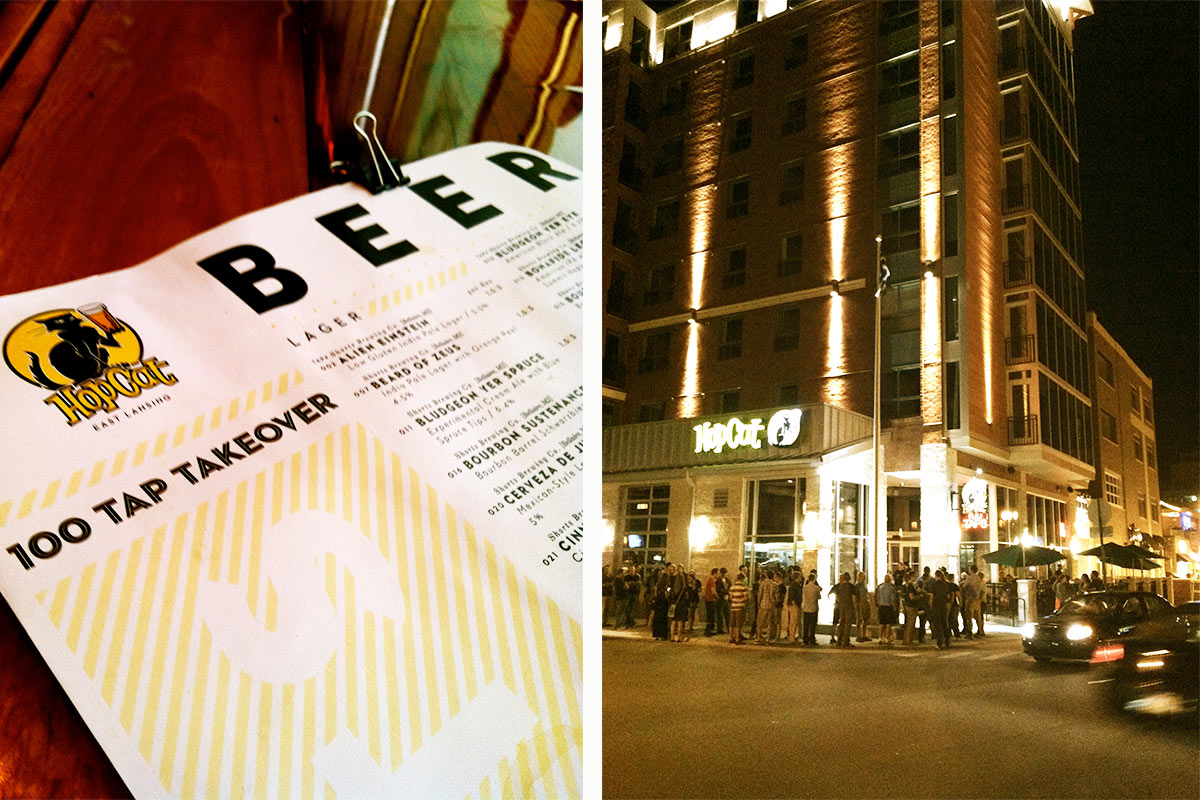 The only complaint I can levy against HopCat is the strange folk art depicting some of music’s legends, in what comes across as their worst-looking moments, painted by a three-year-old with crude art supplies. On one wall the great Bob Dylan looks like Skeletor, clutching a homemade guitar and falling asleep on stage. On another, The White Stripes look androgynous and sickly. I’m still not sure who’s who even though one is playing guitar and the other drums. The paintings are a funny conversation starter, anyway. I was told later that they were by acclaimed, self-taught (what a surprise), painter Lamar Sorrento. Alrighty.

Related Reads
People
11 Brewers Share Their New Year's Resolutions For 2021
People
A Pint with Leashless Brewing: How One Brewery is Revolutionizing Organic Craft Beer
People
Athletic Brewing Co. Is Making Non-Alcoholic Craft Beer Cool in 2021
Final Tally: 5 out of 100. Bottom-line: If you’re in East Lansing, there’s no place better for craft beer. I didn’t even mention the food, which was darn tasty. The service was outstanding, and you can even bring your pooch on the patio if you’d like. Michigan’s reputation as a Craft Beer Mecca just got a bit bigger with this East Lansing addition. Short’s + HopCat, Cheers!

John Page is a Lansing, MI resident and an avid craft beer drinker who honed his skills at Michigan State University. He enjoys Double IPAs and Stouts, but never passes on trying a new brew. He’s also cut his teeth as a homebrewer, operating under the moniker ‘Grumpy’s Beer Company.’