A recent vacation took me west to the Grand Canyon State: Arizona. And as with all my vacations, there had to be some component revolving around beer. I found just that on The Flagstaff Ale Trail; a network of eight breweries, two beer bars, and a bottle shop. Fortunately, I was able to visit nine of the eleven locations and get a real feel for the Flagstaff beer scene, as well as the greater Southwest.

As I wandered the trail, there was one brewery that really stuck out. Tucked in an industrial park adjacent to an off-ramp I spotted a small brewery with a little taproom and a giant T-Rex. As soon as I sat down at the Historic Brewing bar, I was greeted by the man behind the counter, Zack Stoll. Turns out he was not only the bartender, but one of brewers. We quickly got to talking…

Can you give a little background about yourself – where you’re from, how you ended up at Historic, and how you got started brewing?

I grew up in the suburbs of Philadelphia and earned a bachelors degree in Environmental Science from Juniata College in central Pennsylvania. It was there that I took The Art and Science of Brewing course that was offered. I had discovered craft beer a couple years before and knew that I wanted to get into homebrewing in order to make beer that I liked.

After college, I worked in various wildlife conservation jobs throughout the country. They were always just jobs and not careers. So I decided to look into brewing professionally, since it was my other great talent – besides chasing furry critters around in the woods. I was brewing at least a batch a week for my friends, and at that point was getting pretty good. I had even won some medals at the county fair.

I took the American Brewers Guild’s Intensive Brewing Science and Engineering course so that I would have the education to base my brewing profession. Once I had completed that 22-week course, I just kept my eyes on brewing job boards. Historic was looking for an assistant brewer, and I knew Flagstaff was my kind of town. So I put in my resume with a heartfelt cover letter letting them know who I was and why I wanted to brew.

So that’s how you ended up at Historic. How did Historic Brewing Company get started in Flagstaff?

Well, the owners of Historic also own three restaurants in nearby Williams, Arizona. Johnny was buying lots of mediocre beer for the restaurants, and thought about starting a brewery to cut out the middle man as well as produce better beer. He pitched the idea to his brother, sister, and mother (business partners), and they liked it. So, Historic Brewing Company was born.

With a well-established presence on the West Coast, Midwest, and East Coast, it seems that the South is the next frontier of craft beer. How is craft beer making its mark in Arizona, and across the Southwest?

Right now Arizona is blowing up with craft beer. New Mexico is as well. It is a fairly open market without any real local juggernauts. So it’s a completely open field to make your mark and expose the people to better beer. The craft beer culture just got here. I mean I hear people talking about drinking Arrogant Bastard for the first time and having their mind blown. So most breweries here aren’t trying to find a particular niche in a crowded market. We are just making good local beer and getting it to the people.

You only opened last year, and have made a big impact in a short amount of time, how does Historic fit into the booming AZ craft beer scene?

I like to think we are trying to push through to the front of this craft beer boom, and we are doing it by making solid, creative brews. We have our flagship beers that we distribute state-wide. And they’re all good beers that I’m proud to make. They aren’t your normal flagship beers: an amber, a pale, and an IPA. We offer a full range of flavors so we have a brew for everyone to enjoy. We just want to get good beer out to people.

How have you handled your growing demand? Are there plans for expansion?

It has been difficult to handle the demand, to be honest. Since I got there six months ago, we have nearly doubled our production. We added two new 15bbl fermenters three months ago, which has allowed us to add seasonal beers like our session IPA and coconut dunklewiessen.

Our head brewer, Ryan (Burac), and I have lots of plans for expansion. But the issue is money and space right now. We dream of having more fermenters, brite tanks – and just bigger and better equipment. But we are working with what we have at the moment. The immediate future calls for a new brite tank and better filtration system. But, we also need more cooperage to keep up with the up-tick in production. If things keep trending the way it is, we will be adding more fermenters and expanding into the rest of the building we are currently in. Right now about a third of our building is filled with wine barrels and we’d like to add to it. So, more space is a must. There is talk of a canning line in the future, but that won’t be for some time. 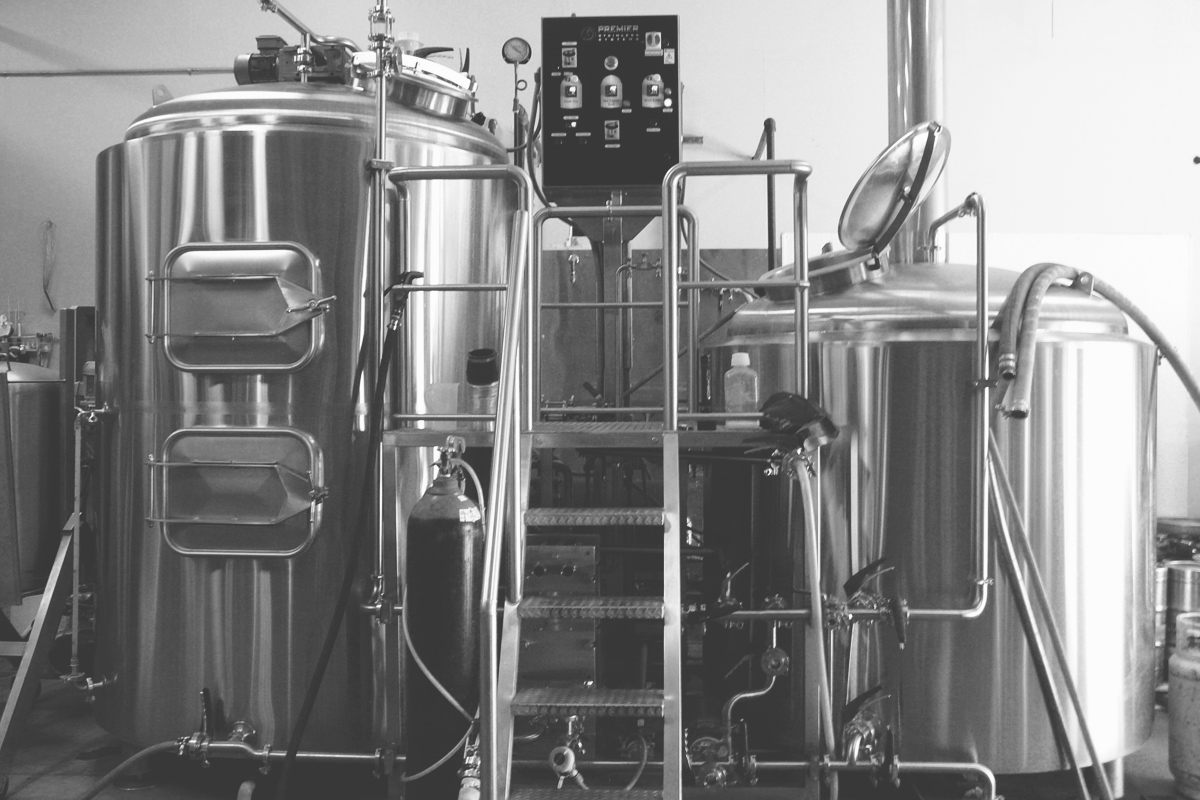 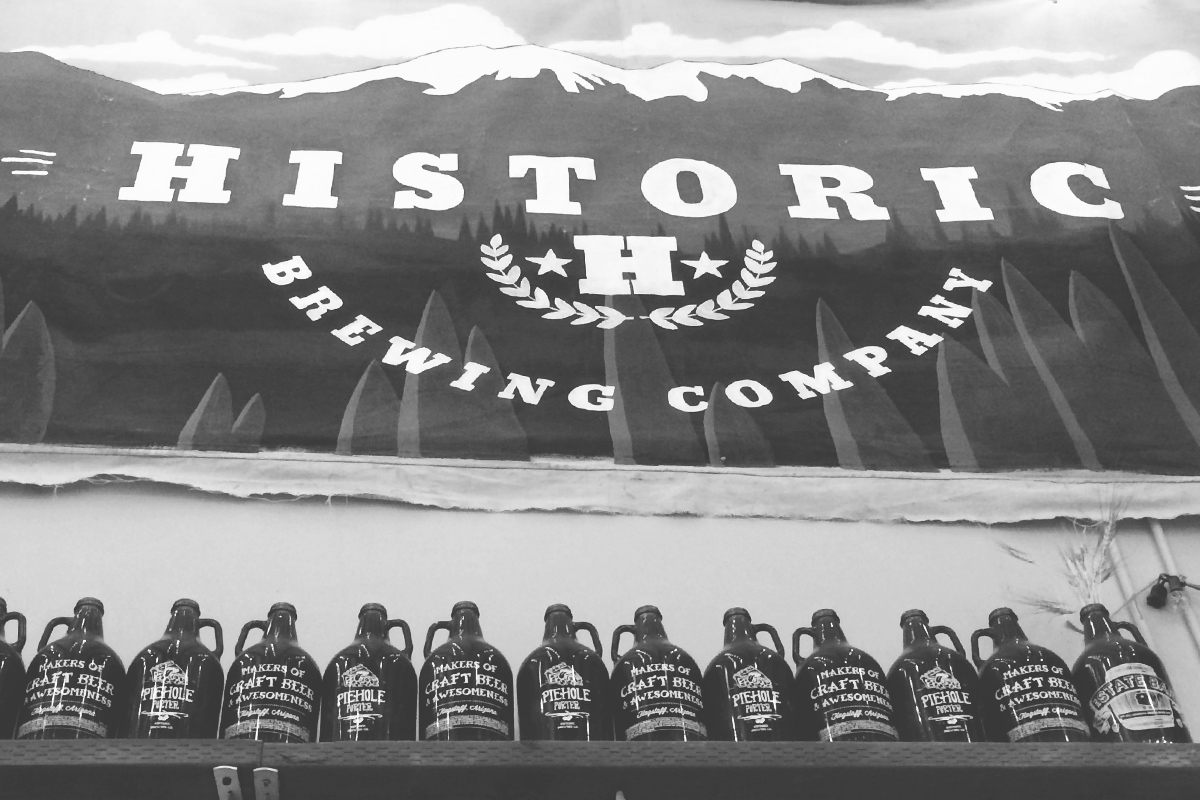 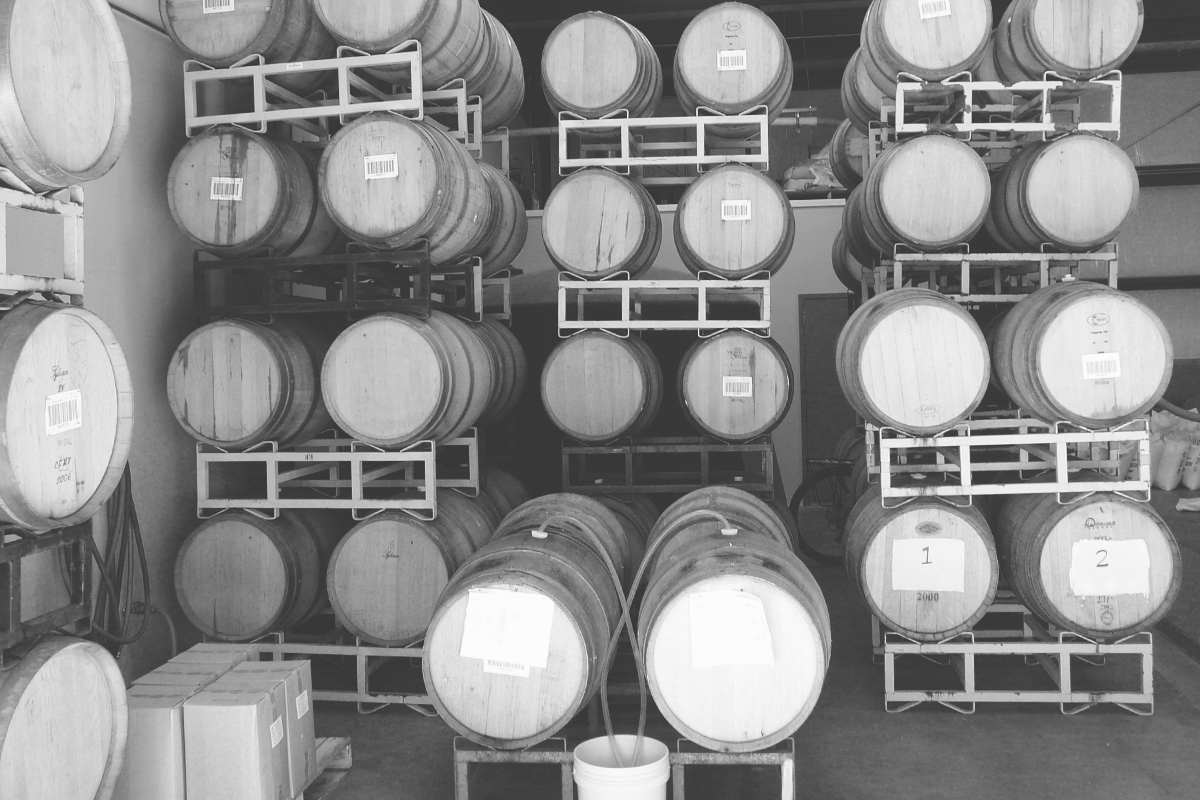 You have an outstanding line-up of beers on tap, and surprisingly no IPA currently. How do you go about creating your line-up?

We want to be different. Everyone has an IPA in their core lineup, and that’s boring. If you don’t have one of the best IPAs in the country, then who cares? With small breweries being limited on hop varieties available – without advanced contracts – that kind of limits the amount of hop combinations you can use. Then our IPA isn’t that far off from their IPA.

So we have a lineup of beers with character: all solid recipes that have something special to them. Like our Joy Rye’d Rye Pale Ale. Lots of people have rye pales, but few use as much rye as we do. I’ve never tasted one with this much rye, and a great Chinook hop bite to it. Our Deer Lord is one of the few Altbiers I’ve ever seen. So we try to have approachable beers that are set apart from the norm. Pretty much how I am; approachable but a little weird. But not so weird you don’t come back again.

Your Snapchat series beers have some unique flavors and ingredients. Where do you draw inspiration for your bolder-flavored beers?

The inspiration for the Snapchat comes from all over. Someone might mention an idea, so we run with it. Or maybe an ingredient, like Pichu berry, becomes available. There was an idea of a breakfast stout – but what real breakfast doesn’t include bacon? So we ran with that and threw pounds of bacon into the coffee oatmeal stout! With my last batch, an oatmeal porter, I just wanted to make a beer for fall. I was thinking oatmeal stout, but I went with porter just for fun. I’ve only had one oatmeal porter before, so why not try my hand at it? That is what Snapchats are about; both the beers and photos = fun. We just did a fresh hop pale ale with wet hops that we got from a friend in Wisconsin. It was fun to make and to get others involved, even if it was just to send out some awesome hops.

Do you ever collaborate with local breweries or local businesses to create your new beers?

We haven’t had a brewery collaboration yet. There just hasn’t been the time. We would most definitely like to, and that may be on the horizon in our second year. We have collaborated with other businesses though. We had Single Speed Coffee Porter with beans from Single Speed Roasters over in Williams (AZ). In a recent Snapchat beer, I used tea that I got from Seven Cups Tea House in Tucson. It came out amazingly in my opinion. We would much rather use local ingredients than outsource. We have also partnered with Satchmo’s Cajun and BBQ to put on beer dinners. It’s about bringing great ingredients and food together to bring good people together. That’s the reason I brew at all; to bring people together and put a smile on their face.

Your location in an industrial park is off the beaten path. How do you overcome the lack of foot traffic, and are their plans for a separate taproom away from the production facility?

I like to think we overcome the lack of exposure with the quality of our beers. People hear about our great beer and go on a mission to find us. They are definitely glad when they do. We don’t have any signage, but people still find us because they hear how good it is. We are this nice little Easter egg hidden in the grass. It also helps that we are distributed throughout the state, so people don’t have to come find us. Although, visiting us is most definitely worth it.

We actually just started taking steps to open a taproom downtown. If we had more space in our current location, this wouldn’t be a necessity. But things can get cramped. Even moreso when I’m working on something while the taproom is open. I need to take up part of that space and the customers suffer tighter conditions. Having the taproom in the brewery adds to the aesthetic experience. But we hope to bring that to our new taproom as well.

Historic has some of the better branding I have seen for any craft beer brand, big or small – how does your brand speak for your beer?

I would like to think our brand represents us as a whole. By us I mean myself, Ryan, Carole (owner and brand warrior), Eva (‘taproom awesome person’), and owners Johnny and Sheryll. We are all kind of quirky, witty, and not the “usual” – but without being over-the-top. And that’s what I feel our beers and branding are like as well. We don’t force it down your throat either. I’ve seen plenty of branding about how awesome and revolutionary the company is with their crazy, crazy beers. You are just force-fed it from some of the big guys at that point. Yeah I get it. You don’t give an ‘F’ about what others think. Oh you’re so edgy! We just have fun doing what we do and try to reflect that in branding and beer.

Where will Historic be in five years?

Hopefully producing over 3,000 barrels of beer a year. (We are approaching 1000 in our first year). Having the largest oak barrel-aging program for sour and non-sour beer in the state. And maybe having a canning line to jump into distribution to other states…

Last question; if you are not drinking beer from Historic, what’s in your glass?

Toughest question yet! I’m a huge homer and love Tröegs Brewing as well as Victory. Those were the guys that changed my beer drinking, and life. Deschutes is the other one that I’m usually reaching for. I’ve just never had a beer from all three that I didn’t like. But I’m also new to Arizona and still trying lots of the local flavors. 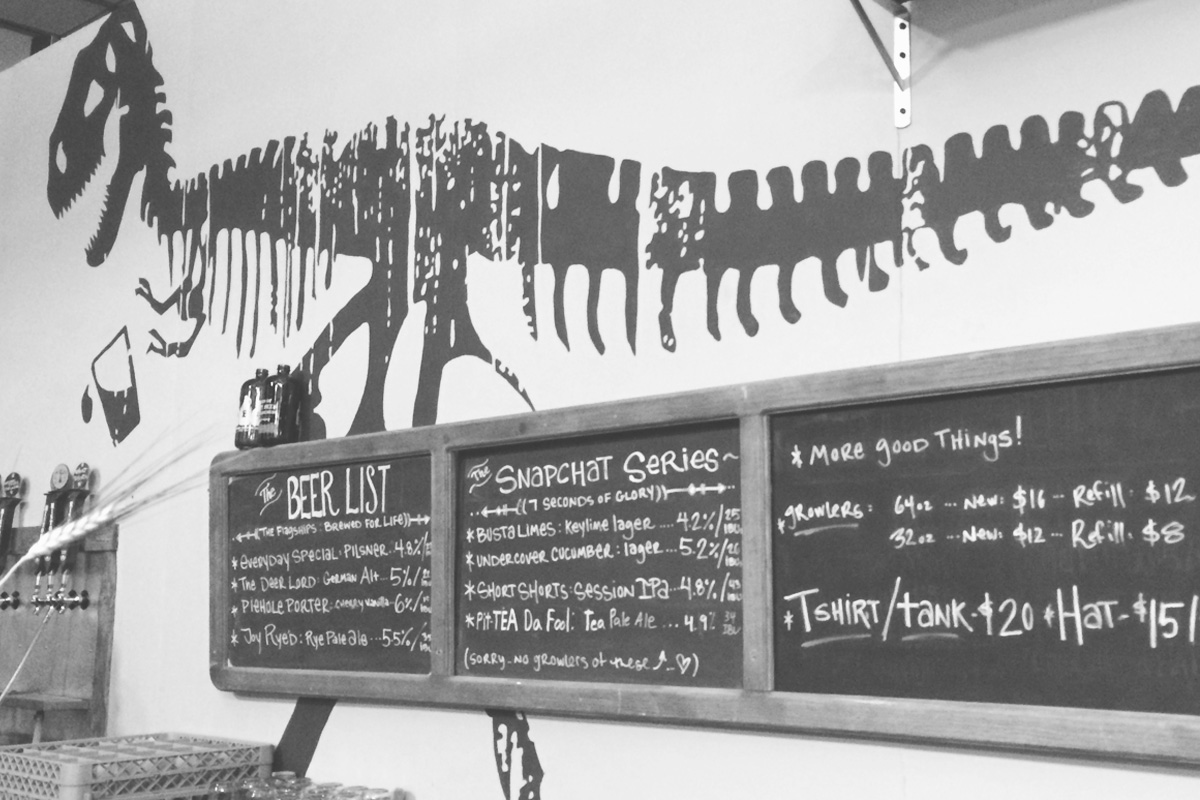 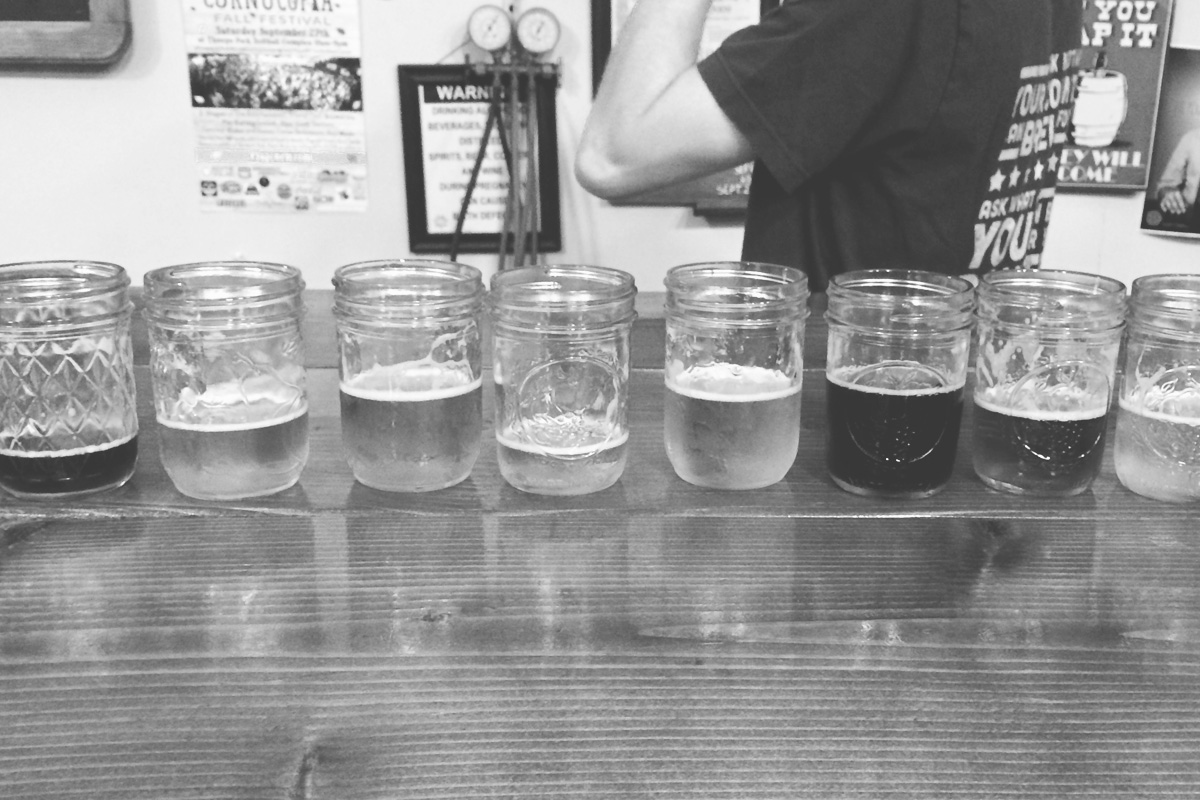 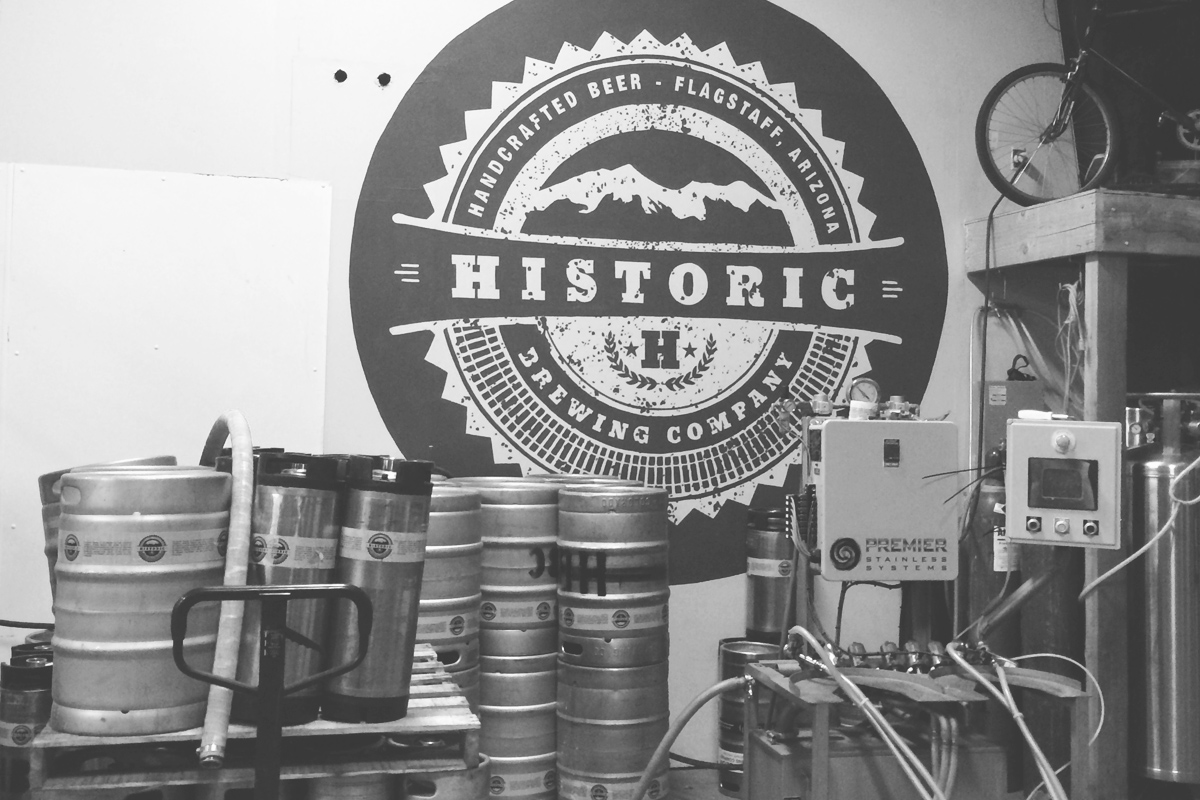 A Tyrannosaurus thank you to Zack for taking the time to tell some stories, talk some beer, and walk me through everyone of their beers. Next time you find yourself in northern Arizona, add Historic Brewing Co. to your itinerary, and stay up to date with Historic on Twitter, Facebook, and Instagram. 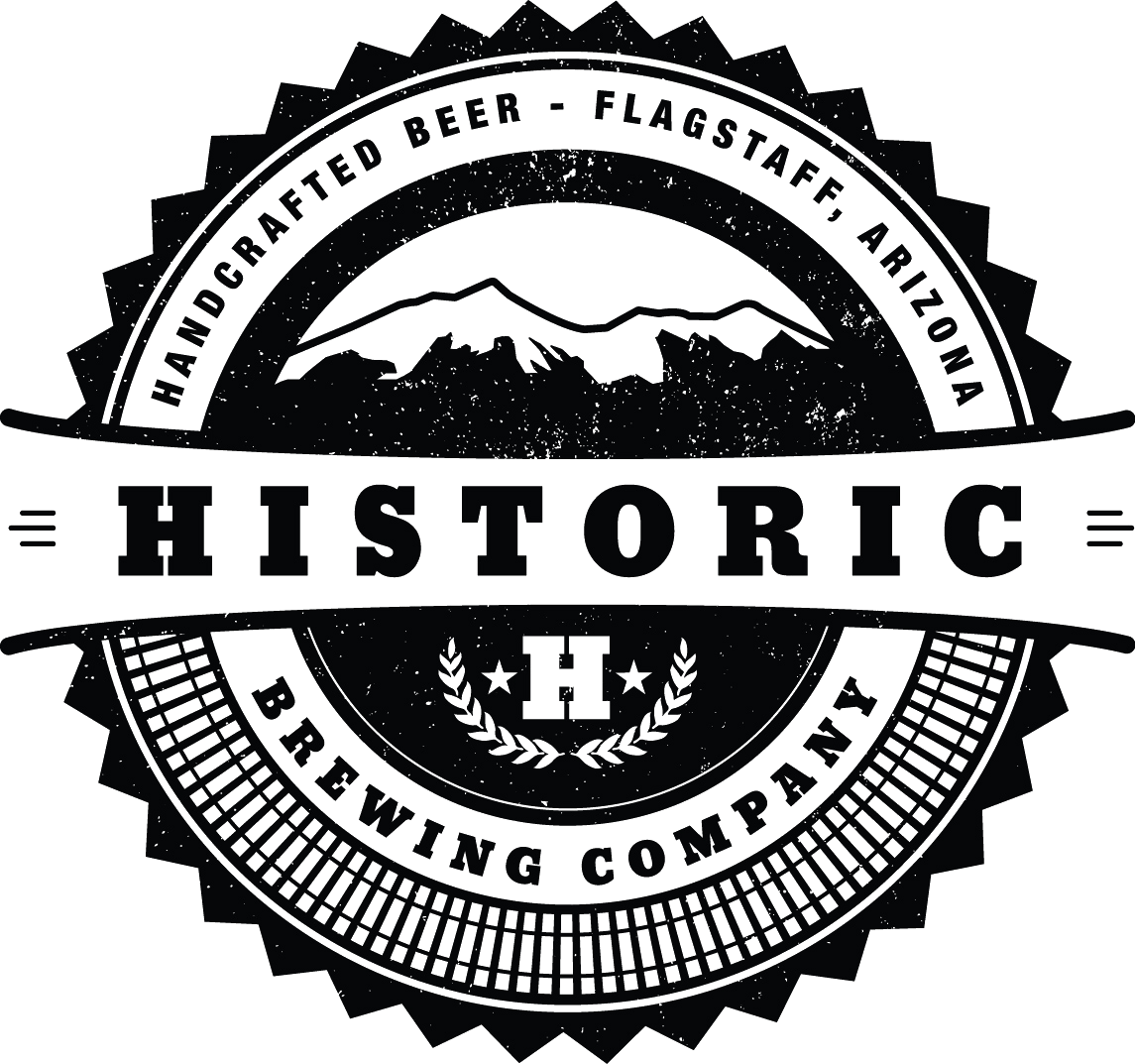