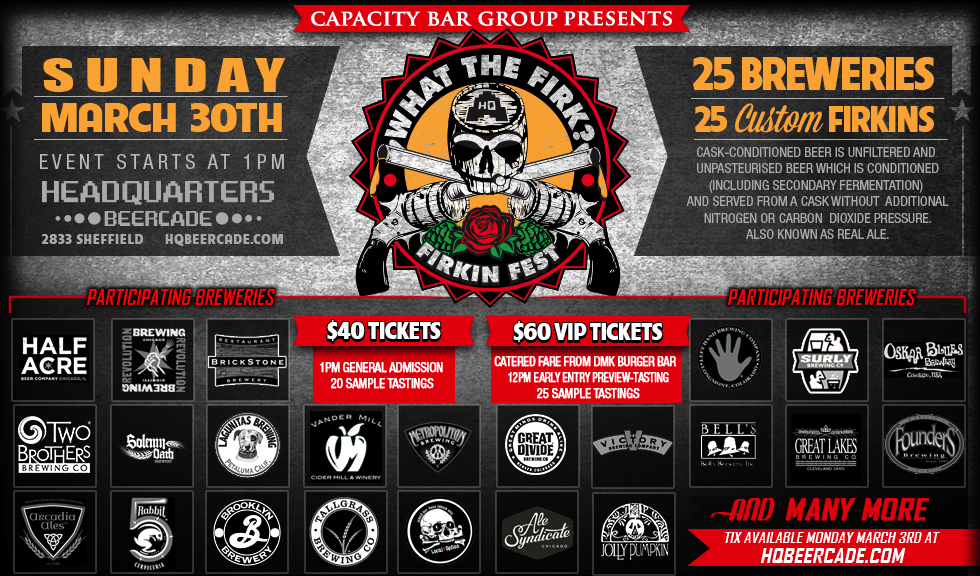 Us here at The Hop Review are excited to announce that we will be helping judge beers at the first What the Firk? Firkin Festival at Headquarters in Lakeview, Sunday, March 30th. Really, we are pretty stoked about this one – 25 of the best breweries in the land, providing some of their rarest brews in the form of cask-conditioned ales. What better way to kick off our role as beer drinking “experts” than at one of the coolest new bars in the city, and with some superiorly top-notch breweries? There is no better way. At least we think not.

The event will showcase “custom” firkins that have never been savored before – and might never be relished again. The festival is a chance for beer aficionados to sample an assortment of options through the purest form of imbibing. We’ve been pegged, alongside some other great Chicago beer folks, to help crown two lucky firkins as “Industry Choice” and “Blogger’s Choice.”

A few local breweries that we are excited to see there are: Two Brothers, Local Option, Lagunitas and Half Acre. Some national/regional breweries will also include Surly (Brooklyn Center, MN); Oskar Blues (Lyons, CO);

The 2 brewery winners will be announced in time for the start of Firkin Fest – providing early festival fans the opportunity to sample the two coveted and credible firkins first, and breweries ample time to spread the word.

Starting March 3, you’ll be able to purchase
one of two ticket options via Headquarters’ site.