Getting Analytical with Empirical Brewery Is brewing beer an art or science? Most brewers will tell you it’s a bit of both. Empirical Brewery, sitting right on the border of Andersonville and Ravenswood, wants your help with the science side of the operation as they plan to integrate empirical consumer feedback directly into their beer portfolio.

We needed to find out more about this unique approach, so we stopped into the still-under-construction brewery to chat with Empirical Founder Bill Hurley and Brewmaster Art Steinhoff. What we found was a pair of unique, passionate, and highly analytical guys who are on the verge of starting something completely new in the Chicago beer scene. And that’s not an easy thing to do.

Thanks for having us to the brewery. We’ve only recently heard about Empirical Brewing, can you give us the skinny on your background?

Bill Hurley: I’m currently a financial analyst and I always wanted to start a business and I love beer, so it was a pretty obvious move to start a brewery. I started planning this on a Saturday morning in February of 2011. I woke up randomly before my wife, wide awake, and nothing else to do. I was like, “I could go to the gym, or I could start a brewery.”  I was on a spreadsheet for about 4 hours that morning and probably have about 900 more hours into it. When the numbers made sense I said “let’s pull the trigger.” It’s been extremely well-planned, meticulously. It took about a year to get it fully planned before we started approaching anyone. It came together pretty slowly. Pretty much any setback you can have, we did; but we got through them all. If someone told me what it was going to take, I probably wouldn’t have done it. But when you get to this side of it, it’s worth it. Hopefully we’ll be firing this up soon. I’m looking forward to standing in here with the smell of malt in the air.

Art Steinhoff: I started homebrewing in ‘82 and went professional in ‘99. I worked at a spot in Wisconsin called Brewmasters Brewpub, in Kenosha. I started on a 7.5-barrel system there and then they decided to expanded so they opened another brewery with a 16-barrel system. They needed someone to run that and they asked if I thought I could do that. I said “Sure, I’m confident.” I then went to Flatlanders in Lincolnshire –that was ‘03–and I worked with them until ’09.

With so many new breweries popping up across the city it seems necessary to have a strong identity for your brewery. How would you describe Empirical’s identity?

BH: The name “Empirical” goes back to when I was thinking up the concept of the brewery. We’ve got to have advantages over Budweiser and Miller besides taste. There has got to be something else. It became pretty obvious to me that Budweiser and Miller can’t change, that’s their model. They have to provide the same product year after year. It works for them, but it’s the exact opposite in this industry. We can constantly adapt, create new styles–and for that matter, we’ve noticed among friends and ourselves that tastes change over time. So things change and we want to be able to adapt. So we’ll be taking empirical observations of how people are responding to our beers. We’ll have a proprietary rating system in place that actually takes into account the feedback we get in the taproom, festivals, and online. And then, it’ll combine that into a proprietary score for each beer. To the extent that a beer isn’t doing well–whether people just don’t accept that style, or we didn’t use the right hops even–that specific beer isn’t going out to the public, and we’ll kill that brand. The idea is to constantly adapt, give people what they want; that is our advantage. We are going to launch with a lot of the stuff we want to launch with, see how it’s received. And the beers that do really well will come back.

The space you have here is massive. What are you planning to do with all of it?

BH: At some point, we’ll be adding a pilot system that Art and I designed over three months. We’ll have a tasting room downstairs, if we can get the licensing. Then hopefully later on we’ll have a proper taproom on the second floor. That was part of the reason we got this building. I live a mile away and I knew of this building, and I always wanted it. It was originally bought by the owner to be torn down–they were going do condos or something. We wanted to renovate this building in this neighborhood, and I think the neighborhood wants that too. Most importantly, this place is the right size for the model that we wanted to have. It’s in a great neighborhood, three blocks from Hopleaf. And we’ll get a lot of foot traffic in the taproom since we are near the Metra.

What’s your vision for the upstairs taproom?

BH: The vision would be that you’ll be sitting essentially in the middle of the brewery, staring out at these fermentors. There would be big glass walls peering out that way. The 120s (120-barrel fermentors) would pretty much go all the way to the ceiling.

For our model, to get the feedback and incorporate that into the beer, we need taproom volume. It’s about getting people in here to try stuff out and tell us what they think. So when the taproom is running, you’ll be able to come in and actually taste two different beers that we brewed in two different ways and be able to give us the feedback of which one is better. It’s a scientific experiment. I think blind taste tests tell you more about a beer than anything.

We can’t help but notice the beautiful equipment you already have in here. What kind of system are you brewing on?

BH: It’s a brand new  30 barrel Sprinkman system from Wisconsin. The reason we bought from them is they do dairy manufacturing–and if you have a bad weld in that industry, people die. Bacteria can get into the milk and people can actually die. They make a weld that is absolutely glass. It’s a perfect piece of machinery. Plus these guys are absolute beer geeks. Everything about that system screams ‘brew geek.’ Art actually helped design the system. He lives really close to them so he was over there determining what components he wanted and how the geometries would work. It’s essentially custom made for us. This system is completely run by a computer. It’s amazing the information you can get from this thing. The consistency of it is insane. I asked how many batches we were going to throw away dialing this in, and they said “zero.”

So when do you expect to start using it?

BH: We are hoping to fire this thing up in the next couple weeks, and then be off to the races in June (Note: Since our interview, Empirical has been waiting on their city permit and hopes to run the first tests on their new system by the end of the first week in June). We’ll be launching draft initially and almost immediately be bottling the Infinity IPA “IBU Overload” version. It’s a 105 IBU version of his IPA, a single IPA. It’s been extremely well received.

AS: I was trying to make a double IPA, but my system at home isn’t big enough. It came out to be a single IPA but the IBUs were right up there. I thought no one was going to want to drink it. I tried it and I thought “this is really good!”

And that will be available on draft and in bottles?

BH: Yeah, and we’re getting a bottling line in the works right now.

Any idea’s what the packaging is going to look like?

BH: We did a lot of work for a long time over different concepts for the artwork. We brought the five final contenders up to my alma mater at Kellogg to show to their marketing club. We incorporated their feedback and came up with a completely new design. The feedback we got is that the logo is strong and we should keep it centered. You want to generally use one primary color and stick to it. Everyone of our labels has a unique color palette. We want the name of the beer to be prominent and the style to be prominent. So that was the main feedback we got, and we added a couple of unique aspects.

We take one of the four main ingredients of the beer of the bottom of the label and as it moves up the label it actually becomes the name of the beer. In the case of Atomic Amber, you’ve got malt starting at the bottom and it morphs into atoms by the time you get to the top. For Infinity IPA, we’ve got hops becoming the galaxy. So they’re awesome labels. The artist, Aaron Melendez, is fantastic.

How do you see Empirical Brewery fitting into the Chicago beer landscape?

What about from the brewer’s perspective?

Alright, last question – if you aren’t drinking Empirical, what’s in your glass?

BH: Modus Hoperandi. We did a blind taste test of single IPAs last summer. My wife went out and bought a bunch of beer to serve to us, including some of our partners. It won in the end. All six of us picked it.

AS: Actually, my homebrew. My wife complains I don’t make enough IPA’s, so she goes out and picks some up as well.

A huge thank you to Bill and Art for taking the time to chat with us. It’s not often we can honestly say we’ve found a unique concept in the Chicago beer scene, but this scientific approach behind Empirical Brewery certainly qualifies.

Find out when you can get your hands on the first Empirical brews by following them on Facebook and Twitter. Keep an eye on the status of their build out and look for Empirical bottles in your local bottle shop soon. 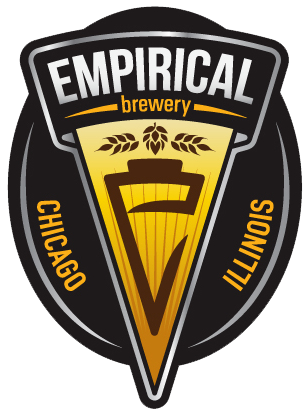