About twenty minutes west of Kalamazoo, a city known around the world for its beer, lies a sleepy town that probably hasn’t yet registered on your beer radar. In fact we’d bet that, unless you’re from the Southwest of the state, you’ve likely never heard of Paw Paw, Michigan.

On a recent trip along I-94 we found a good reason to stop. Paw Paw Brewing Company operates a tiny taproom and slightly larger production facility; bringing craft beer to a town badly in need of some variety. During our brief visit, we got a chance to chat with Trevor Klimek, a brewer at Paw Paw and a man who’s deeply invested in bringing craft beer to rural Southwest Michigan. 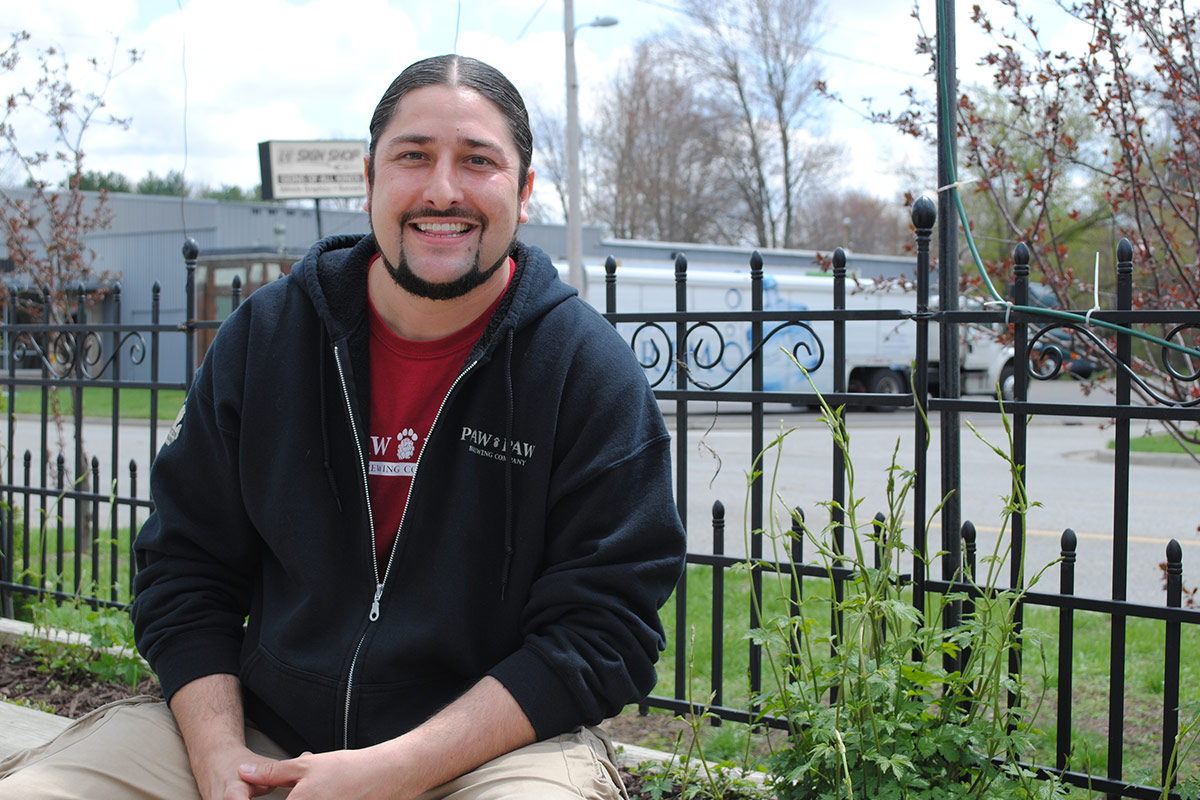 So how does a man such as yourself end up in Paw Paw? What’s your background?

I was a student at Western Michigan University for music and dance education. After high school I had the opportunity to travel around the world and teach kids about song and dance. My good buddy, Colt Dykstra who actually works at Arcadia now, kinda helped me fall in love with craft beer. After about a semester of going to the local liquor store and picking up the best and newest craft beer and everything you could possibly get, I said, “Hey man, we need to start homebrewing. We’re spending a little too much money just for hanging out on the weekends.” Colt’s uncle was a homebrewer so he said, “Trevor, we’re gonna start homebrewing.”

We went down to Bell’s to get our ingredients. I was frequenting Bell’s General Store so often that the manager said, “Hey, you want a job here? You’re here more than some of my employees.” I was thinking – man, a homebrew shop, that’s kind of weird! I was working at TGI Fridays at that point in time. But what were my parents are gonna say? Working at ‘homebrew shop’…isn’t that a little taboo? But then I thought ‘na, it’s not a big deal!’ So I had the opportunity to do that and I really kind of found myself. I fell into this niche of who I really was. I grew with Bell’s for six years. I grew the Bell’s General Store, educating people about craft beer – as well as homebrewing, wine making, mead making, cider making. Anything in the fermentation arena. It’s that balance of the art and the science.

So now you’re here at Paw Paw Brewing which we’ve heard more and more about recently. What’s the story here?

We started here (at the pub location) about three and a half years ago, brewing on the Sabco system. That’s what Sam Calagione [Dogfish Head] started on. We had to brew about six batches a day. So, lots of brewing in order to produce two barrels a day. After the first year, we grew to our production facility down across the street from St. Julian Winery. We grew to a small, six-barrel fabricated system and progressively grew from there. We’ve been bottling our beers for just over a year now.

This is a pretty small town. How’ve you guys been received by the locals?

Extremely well. Being a bedroom community of Kalamazoo, we’re able to grow off of that. People have heard of craft beer, they’ve likely heard of Oberon or something like that, but maybe haven’t had the experience to try something a little bit more delicate. When we started the brewery, we decided that St. James English Mild would be our flagship ale. Easy drinking, crisp and clean, and little bit biscuity and bready. It wasn’t going to scare the pants off of anyone like a double IPA or an imperial stout. After the first year, we were able to grow towards some more hop-forward beers. Some of the rural people weren’t thinking that they liked ‘hops.’ And they now realize that maybe they don’t like bitter beers, but that they do love the characteristics of hops. 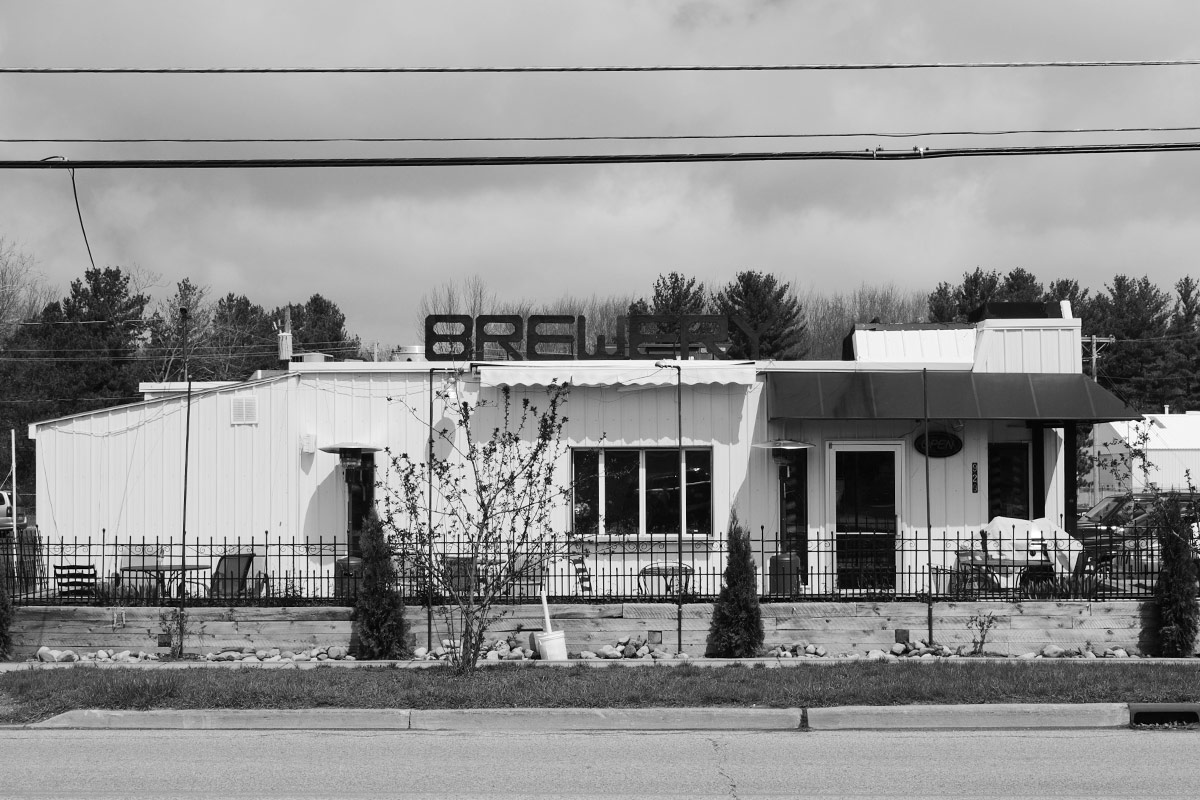 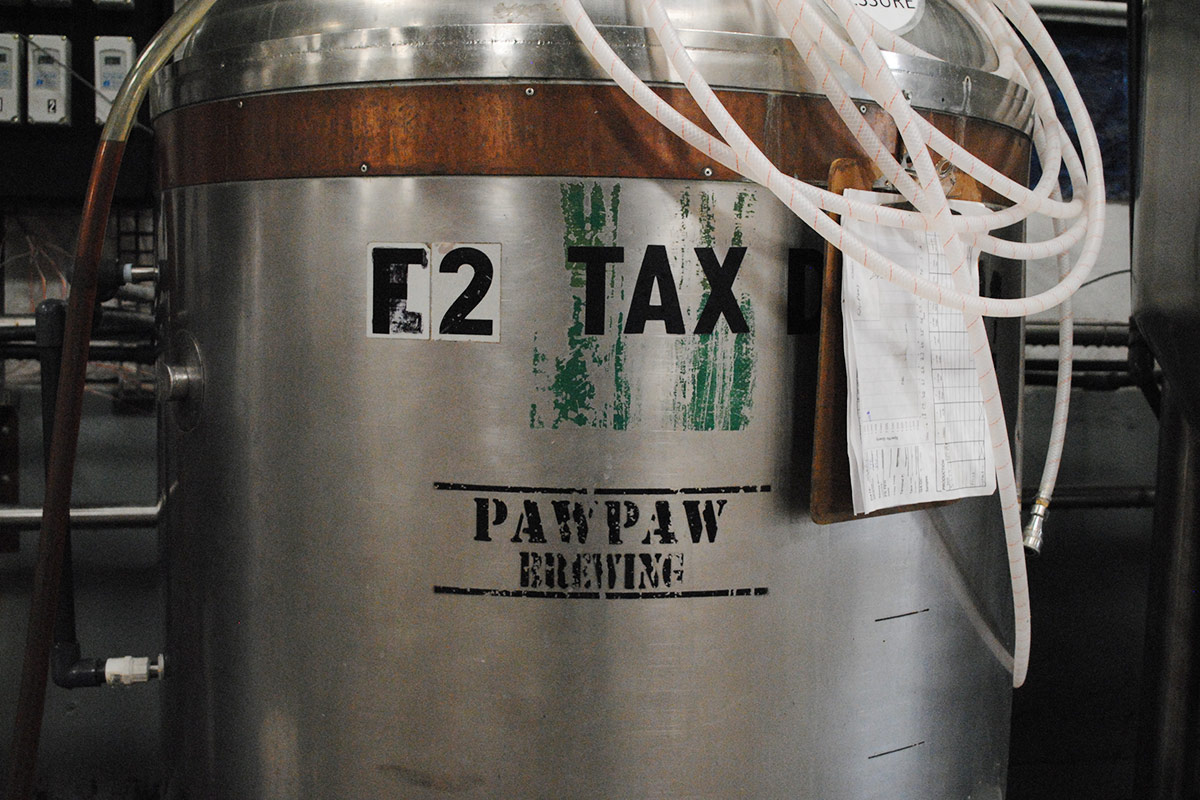 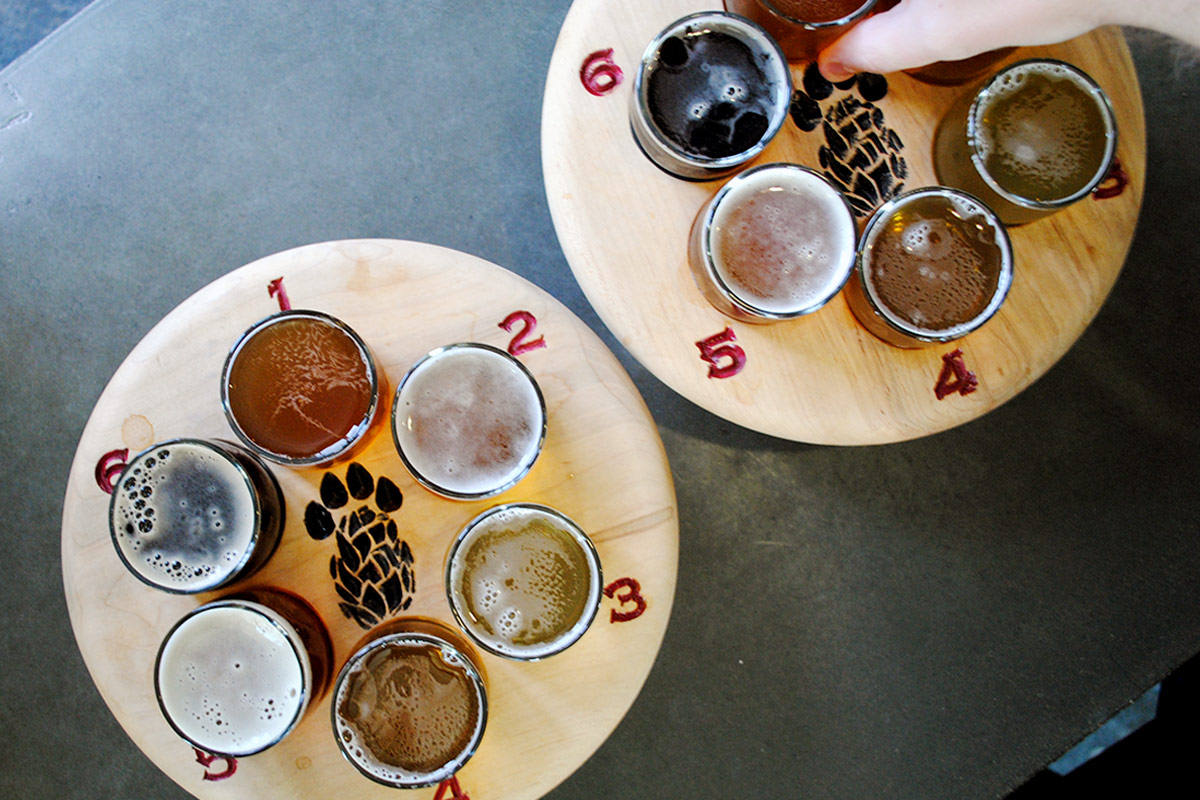 Have you noticed a lot of gained interest in homebrewing, locally?

Positively. That’s really what it’s all about. They come and they drink something that has a little bit more flavor and they’ll ask questions about it and want to learn more. The way I suggest that they learn more is to try it out themselves. It’s pretty easy to brew beer; it’s pretty hard to brew consistently quality beer. I think that people like that challenge. Craft is a hands-on thing. When you can feel it, you can smell it – you’re gaining. When you gain in life, you’re making yourself and those around you better.

Speaking of that, we heard you’re actually doing some homebrew classes here at Paw Paw?

Yea, I did some homebrew classes here at the pub this last winter to kind of get people excited. It went really really well. We had seven classes going through everything from the history of craft beer to Homebrewing 101. And a little bit more advanced ‘201’: how to bottle, how to brew better beer and the importance of healthy yeast and oxygen to your beer. The more we as craft beer lovers appreciate a product, the more we’re going to want to learn about that product. We put a little bit of time and energy into learning about the product, then we appreciate it more. It’s this positive, cyclical situation where we’re always appreciating it more and the whole community is growing in a positive way. 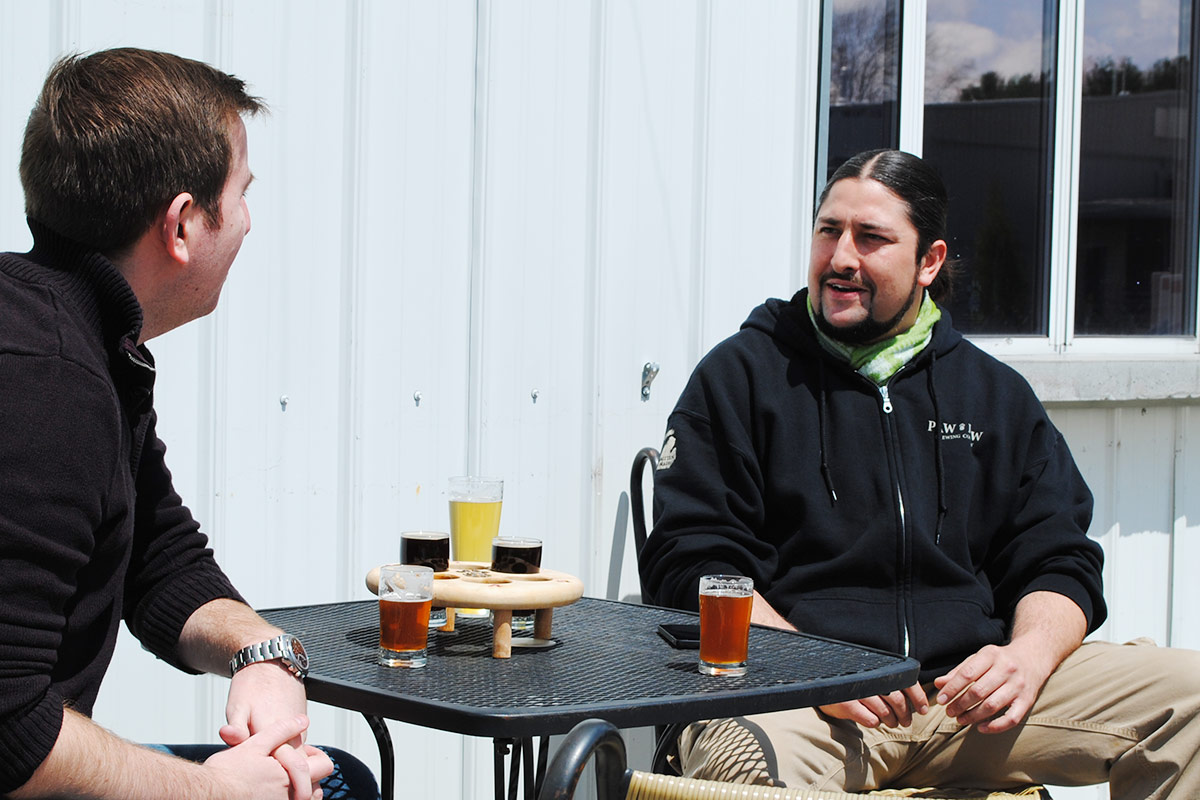 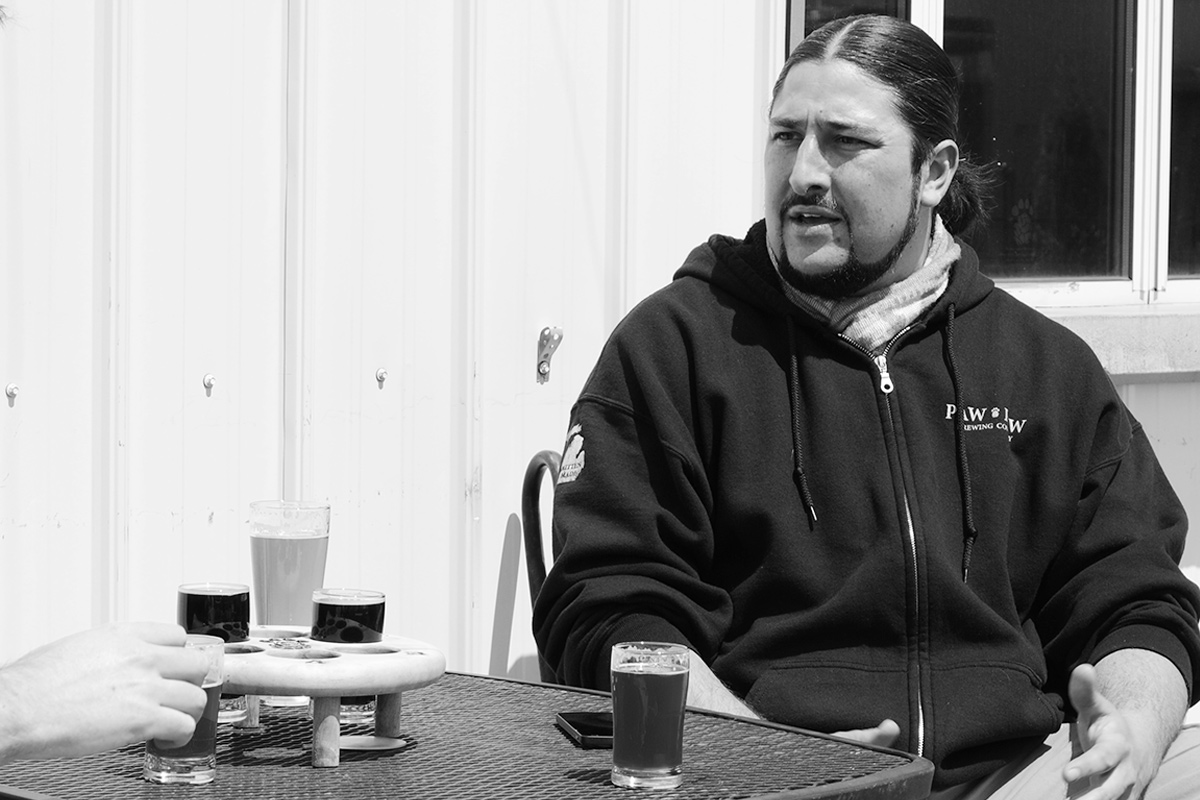 Would you say most of your clientele are from here in town, or do you get visitors coming from Kzoo as well?

Yea, the majority of the people out in rural areas have made Paw Paw Brewing as their home base. This is where they come three, four, five times a week. When they’re in Kalamazoo they will hop around to the different breweries in town – whether they’re going to Bell’s or going to Portage and Latitude 42, which is an amazing brewery. On the other hand, there’re a lot of people in Kalamazoo who have their mainstay places during the week, but on a weekend they’re making the trip 20 minutes to Paw Paw to see what’s going on out here. It’s a totally different feel. I love Kalamazoo. But, there’s something about sitting on Red Arrow Highway, letting the cars pass, enjoying the beautiful sun and enjoying a little bit slower pace. It’s relaxing.

Well, we know we could spend all day here if we didn’t have to keep driving.

What we want to do is really focus on the community. So it’s kind of this “inwards-out” approach where we started really small for people right down the road who didn’t know about craft beer. We started educating them, and they started appreciating it so much that they told their friends about it. So it started here and now we’ve made it to the east side of the state. People are calling us – coming over from Ann Arbor and Detroit and telling us they’re coming just to hang out here for a day. We start small, we take everything we possibly can and put it right back into the community. It’s a lot of hard work and dedication but it’s who we are.

Any collaborations planned for elsewhere in the state?

We’d love to do everything we possibly can. It’s difficult when we’re spread as thin as we are, being a small business, maintaining, and growing. Collaboration beers are very fun – but they also, respectively, jerk up the production system. But we’d love to do it. We’ve had a lot of opportunities. If timing works, then those kind of things will play out.

We did do one with Right Brain Brewery in Traverse City. They’re great guys and we learned a lot from that relationship. They came down and brewed at our facility and we went up to their facility to see how they do things. We had one scheduled with Saugatuck Brewing Company but production schedules kinda got jigger-jaggered. We’re keeping the options open but we’re still working really hard to keep as much Citra Melon Session IPA out there because that’s a beer that distributors want 3 times as much as we can possibly produce. So that’s a good sign.

Alright, final question: if you’re not drinking Paw Paw, what’s in your fridge?

The funny thing is that I don’t drink a lot at home. Alcohol is a poison and we have to respect that we’re poisoning our bodies. Being in the industry, we need to respect this as much as we possibly can. There are balances that we have. I drink at the breweries plenty. My answer would be that I drink the most local beer wherever I am. The freshest beer is the best beer. If I can go to a location where beer is brewed, then at that location – with the shortest tap lines – I’m going to get the freshest product. That’s what I’m going for; I’m going to drink a beer that has no oxidation. 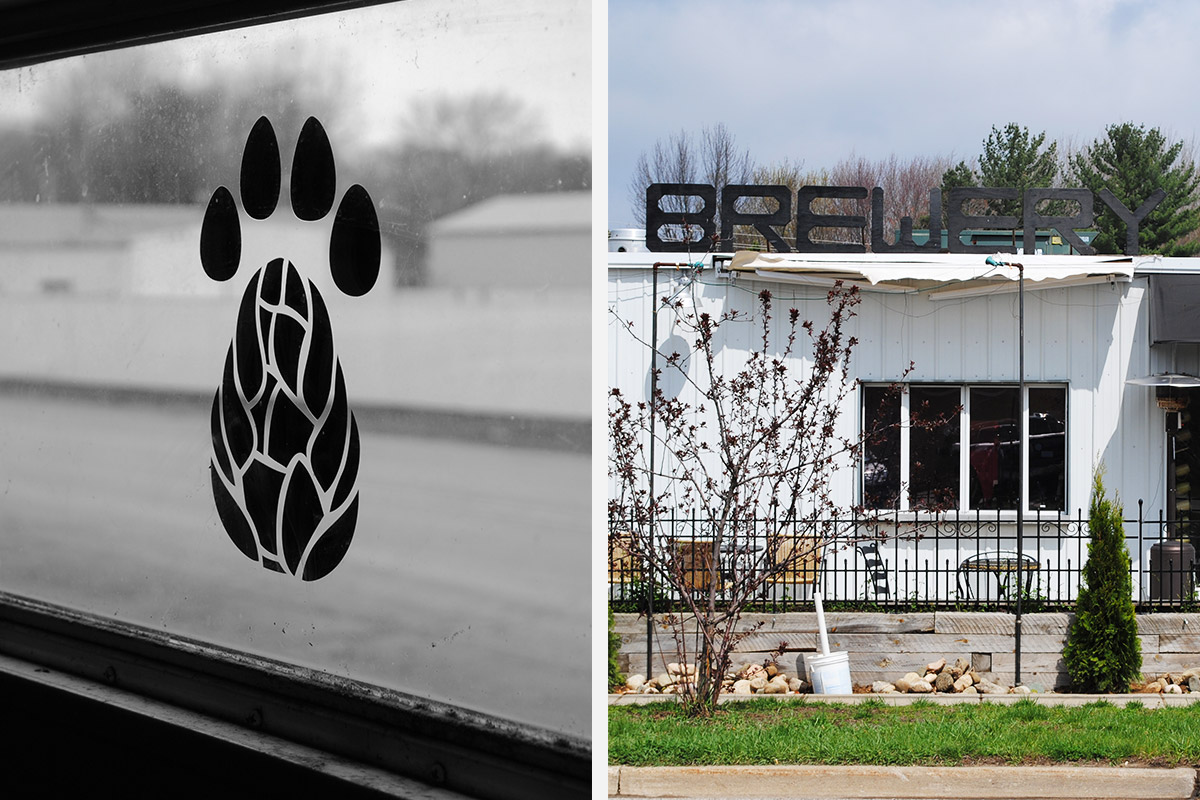 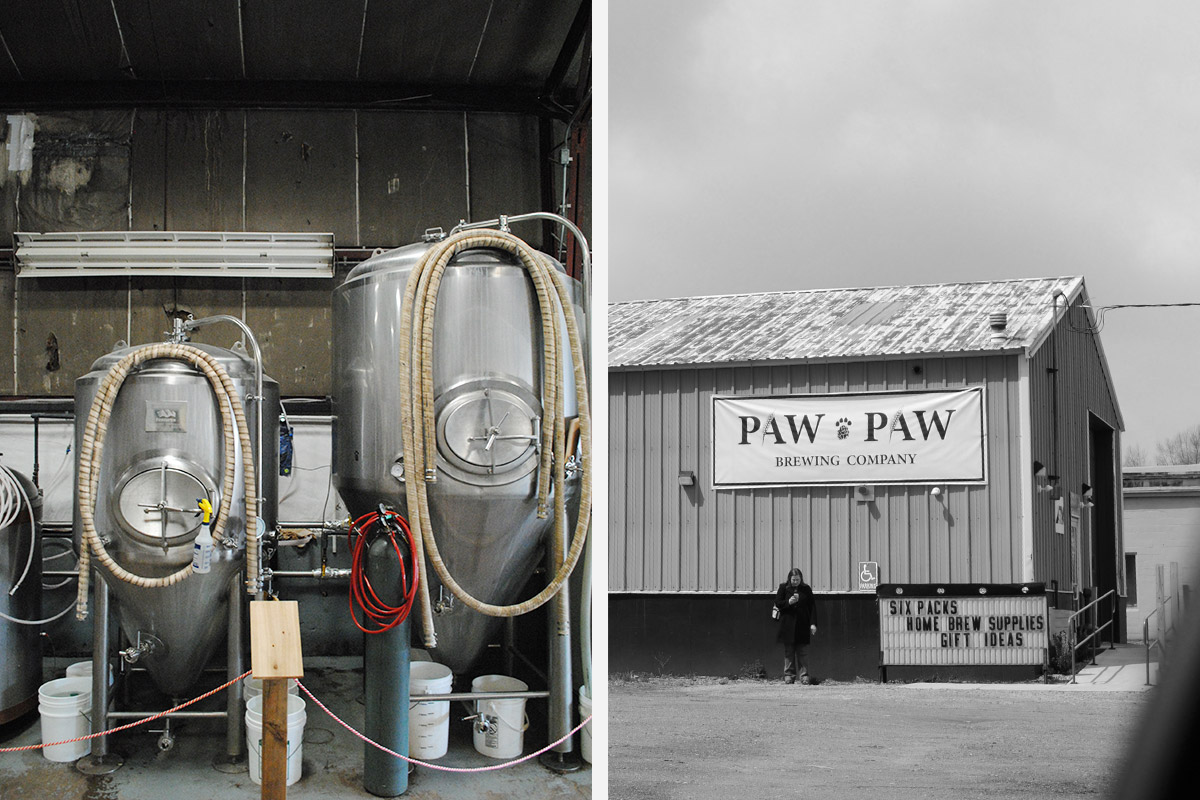 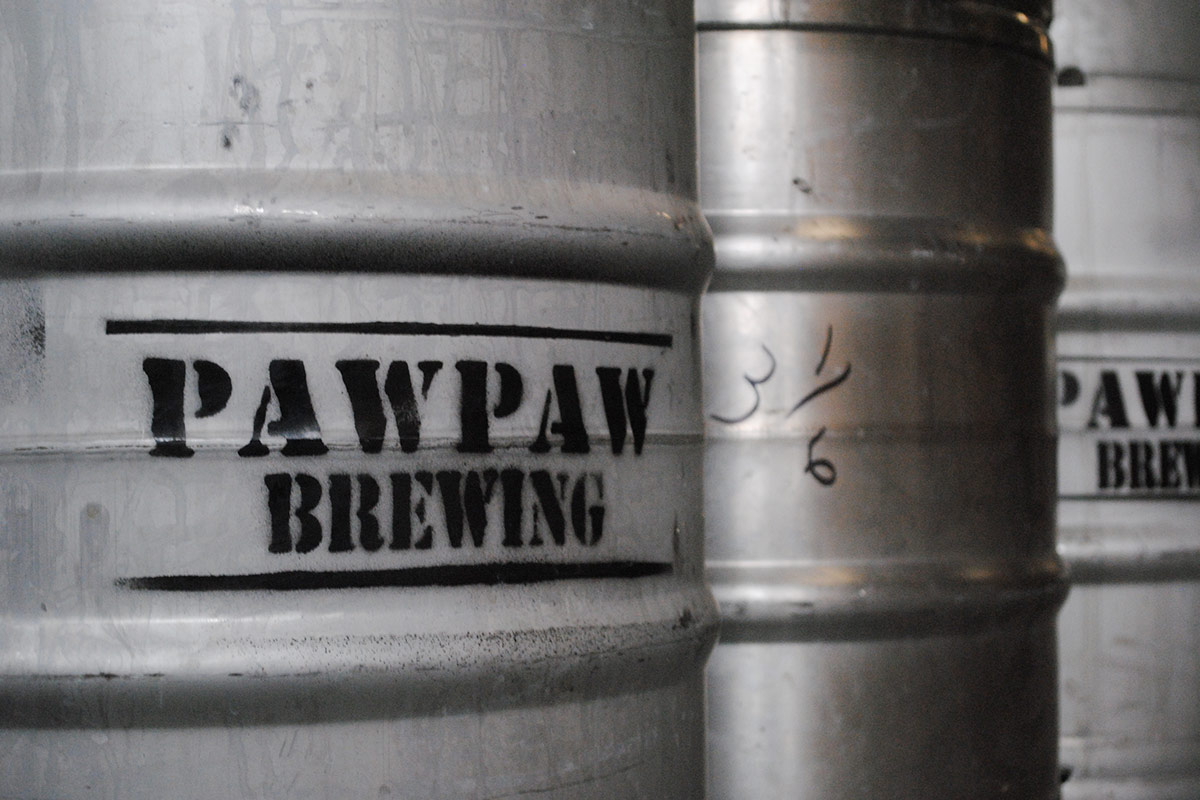 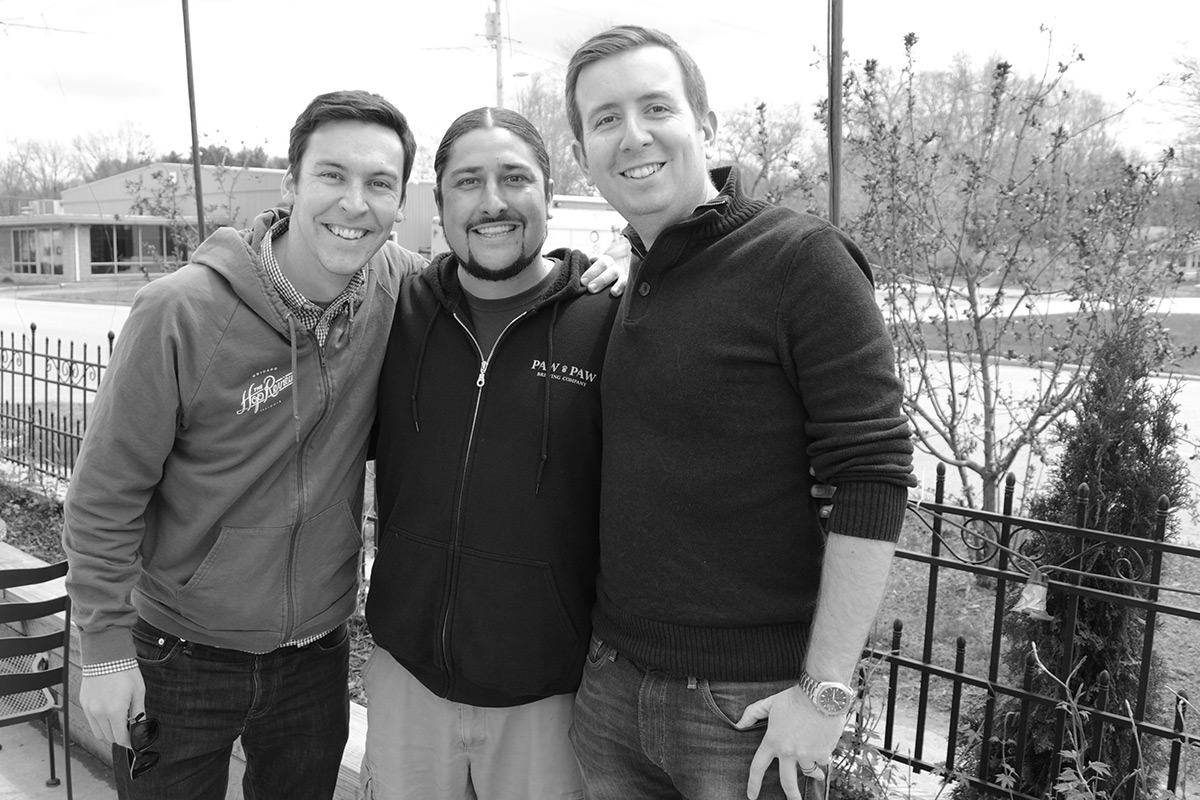 A huge thank you to Trevor for taking the time to chat with two random guys passing through. If you find yourself Michigan-bound this summer, stop into Paw Paw Brewing, grab a seat on their patio, and order yourself a flight. The ever-changing selection almost guarantees you’ll find something to your liking.