Finch’s Beer Company is something of an anomaly in Chicago. For those of us who keep a close eye on the local beer scene, Finch’s seems to be a brewery that appeared out of nowhere several years back. A brewery who’s 16 oz four-packs have quickly become ubiquitous, both at your local bottle shop and and the Jewel-Osco down the street.

But what has driven this rapid expansion from a local micro to a booming brewery now found in twenty-two states? We’ll admit that we knew very little about the people behind one of the city’s fastest growing products. With an eye on changing that, we stopped into their Albany Park shop, cracked open their new Hardcore Chimera Imperial IPA, and sat down with Brewer Steven Slater and Brand Coordinator Bart Sakowski.

Thanks for having us guys, and – we have to say – this Hardcore Chimera is phenomenal.

Let’s start from the beginning. How did Finch’s get started?

Bart: Ben (Finch) was working for a design firm, and he’d teamed up with the original head brewer, Richard Grant. They came together and picked out the equipment together, and Richard hammered out some recipes and went from there. Distribution started a couple weeks after that.

Steven, so what’s your background as a brewer?

Steven: I was a homebrewer for years, and I worked at Piece Brewery & Pizzeria in the kitchen, and waiting tables. But all I wanted to do was get back there in the brewery. They weren’t really looking for anyone – but at the same time, Haymarket Brewery opened up. So I left Piece with the hope of trying to get into the brewery. I was volunteering with a couple breweries, including Ale Syndicate. Then I saw on Facebook that Finch’s was looking for volunteers on their canning line. So I started here as a volunteer, and they moved me into brewing when the original night brewer, Charlie, left. And then I’ve just gone from there.

When was the first brew date at Finch’s?

Bart: Sometime during the summer of 2011.

Homebrewing can allow you to be a lot more creative, but at this level, you often have to appeal to the masses. Do you feel you have to hold yourself back sometimes?

Steven: I definitely feel there are some constraints. I’d love to make something like Hardcore Chimera all the time, but that’s not what everyone wants. There’s the cost of doing something like that. I had to look at what we had, and decide where we could go with the recipes. There is always that creative piece to do something different every time, but the reality of it is I have to brew so much of this a week or so much of that a week to meet demand.

So you’ve been at this for just over three years now. What did the brewhouse look like on day one?

Bart: We had the same brewhouse, but only had five of these 30-barrel tanks. We’ve grown a lot since then.

Steven: The original plan was to have this many tanks in five years. It’s only three years and we are at that point. We now have twenty-one 30-barrel fermentors, four 30-barrel bright tanks, and one two-vessel 15-barrel brewhouse. We sometimes turn them over three times a day. We crank out seven 30-barrel batches a week.

We’ve stopped in briefly once before and someone mentioned your canning line…and how big of a pain in the ass it was. Something about the instructions being in Chinese?

Steven: It was all in Chinese. It was all Chinese-manufactured so I had to use Google Translate on my phone to read it. It was not a great machine.

Bart: But you guys are coming in at a good time, because our brand new canning line came in four weeks ago. So we are still working out the kinks trying to figure it out. I mean it’s pretty much apples to orange from what we had. More like a Pinto to a Ferrari…

There’s a few other changes since our last visit. Those barrels are new and we don’t see the huge pallets of cans and kegs we saw in the past. Presumably you have an off-site facility for storage now?

Bart: Yea, we’re distributed in twenty-two states, including DC. With the need to produce and package at the scale we are doing in this space, without that warehouse…there is just no way.

Steven: For the barrel-aging, we are on our second or third release. We’re doing our Secret Stache Stout, in Willett Distillery barrels, as well as Pig In The Wood, which is our barrel-aged Fascist Pig Imperial Red. 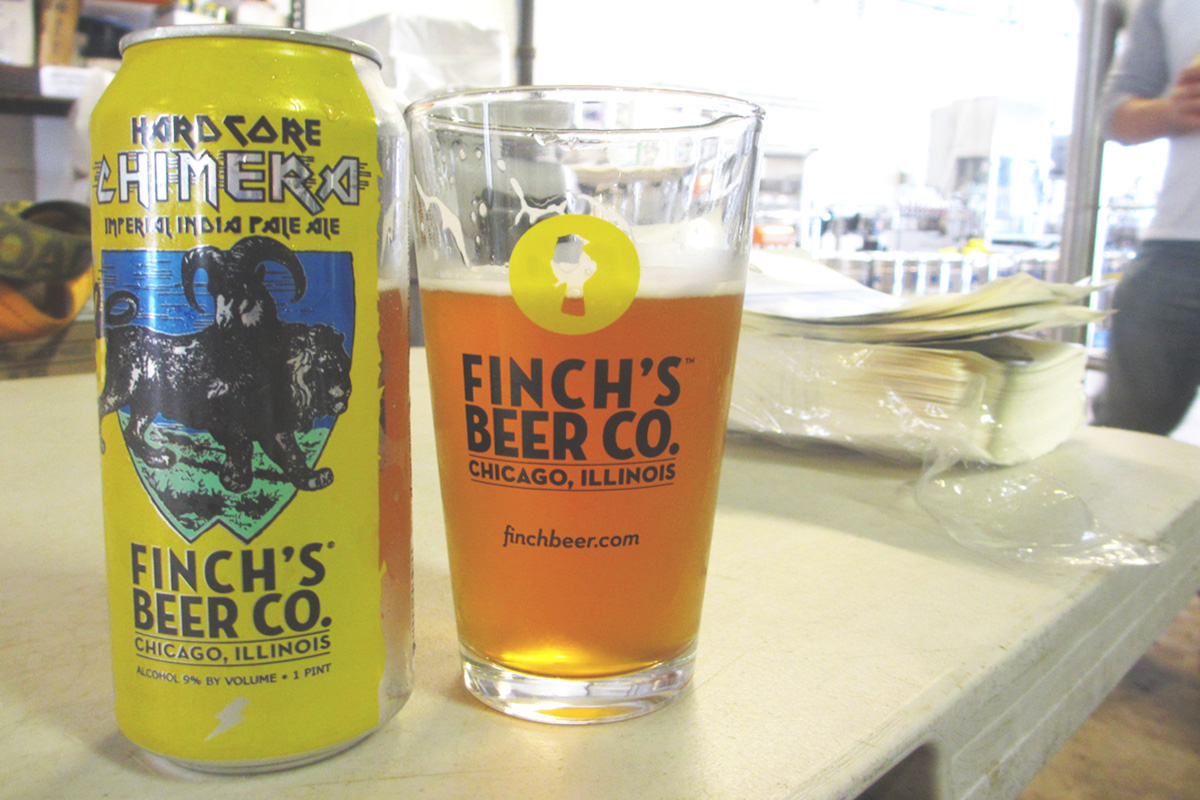 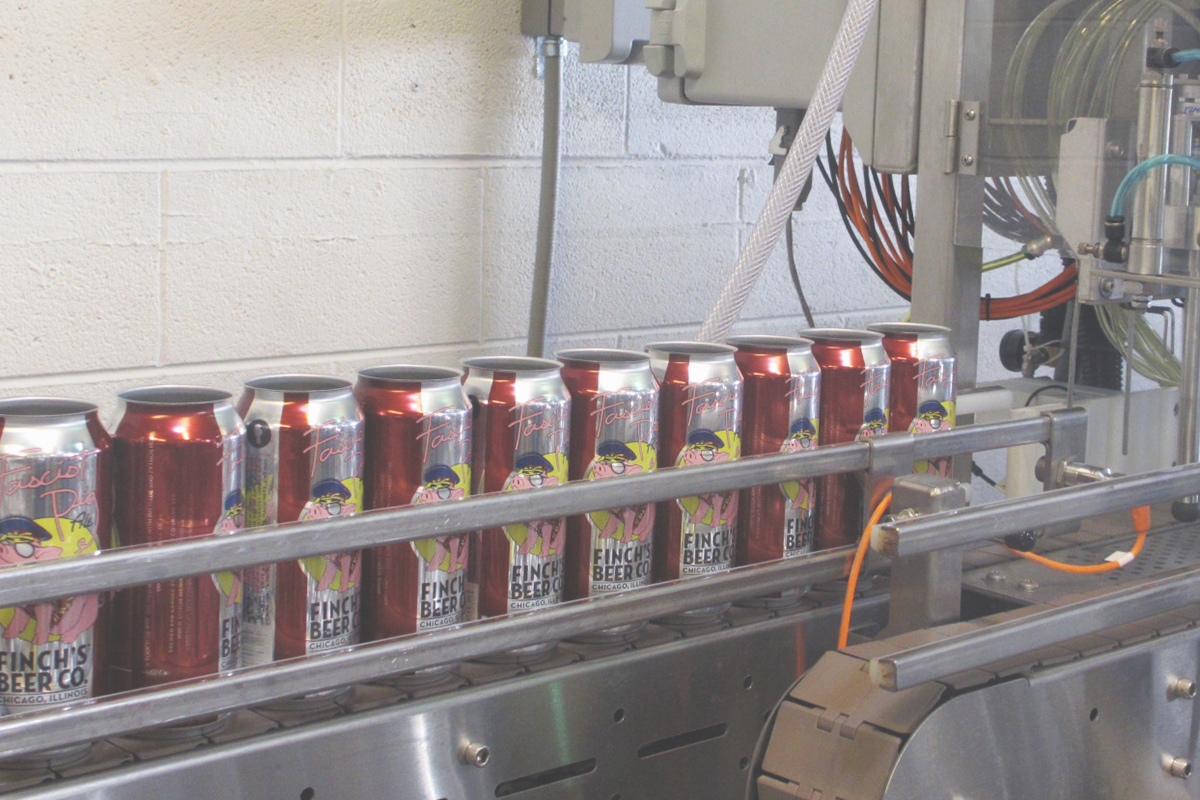 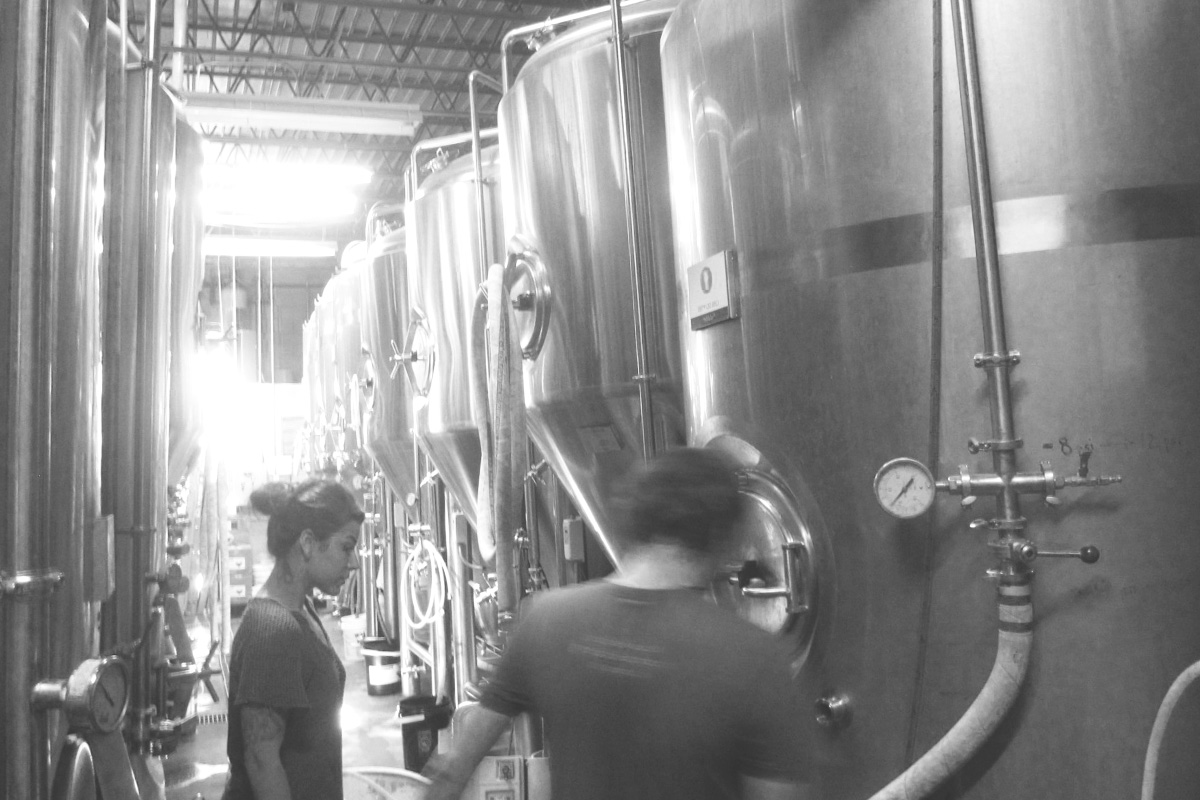 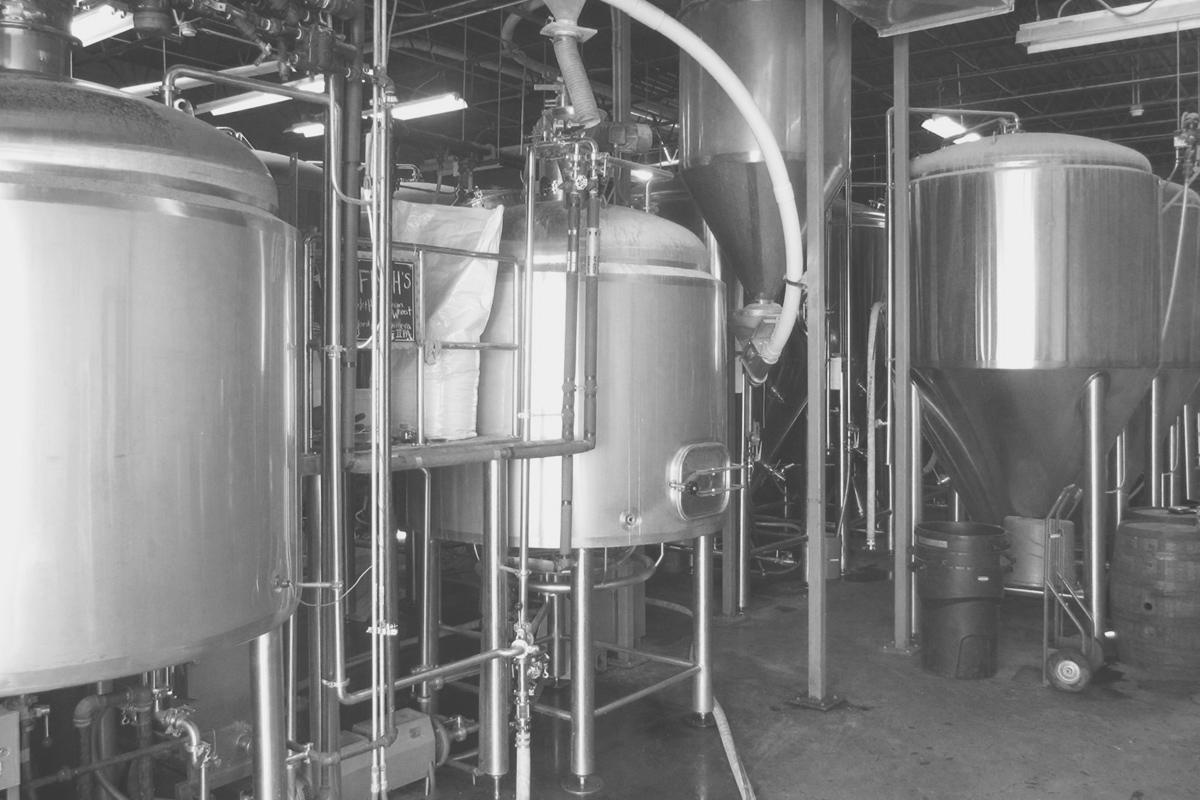 We weren’t aware that you were distributing so widely. When you release a new beer like Hardcore Chimera, does it go to everyone evenly?

Bart: We definitely have markets that are stronger than others for us. Other than Chicago, Atlanta is one of our biggest.

Atlanta? Any reason why you’re so big there?

Bart: I think craft beer has kind of blown up there, like Chicago was two, three years ago. Because I don’t think they have many of their own breweries, they are just hungry for it. We went down there, and they just loved it. We were the beer of the month for Taco Mac in May, which is a huge chain that has like 50 taps.

Are you guys still doing a lot of tours, or the Brew Bus?

Steven: Brew Bus happens occasionally, tours are doing fantastic right now. We had a Groupon going on, and we went from doing two sessions of 20-25 people, to five sessions per Saturday, with upwards of 30 people per session. It has really exploded. You get to see where your beer is made. It’s a good connection with the brewery, because driving by you just see a brown brick building. You don’t know whats going on in here, unless you smell us mashing or brewing and see it yourself.

Speaking of the building, is there a reason you don’t have signage out front?

Bart: Well if we had signage – and we still get this occasionally still – people would just pop in. Since we don’t have a taproom, and can’t sell straight to the public, it would be more of a problem. Especially when we are running machinery; it would become a safety issue.

Everyone loves a taproom. Any reason why Finch’s hasn’t explored that option yet?

Bart: When people ask me that out in the market, I always tell them we kind of need an office and a cooler. If we didn’t have those things, then maybe. But those things are kind of essential. A taproom is definitely in our future, we just don’t have the space right now, nothing else can fit in this location.

What’s your take on collaborations? We haven’t seen much of that from Finch’s.

Bart: For the Threadless IPA, we did an open call for a design for a beer can. And then the public voted on the design they liked the best. The can we have now is the winning design. And, so, it was a collaboration in the sense that they came up with the artwork and made the beer. Actually, the runner-up artist is doing the artwork for our new Finch’s Pale Ale.

Steven: We are definitely working on a few things for the future. Earlier this year we did Meeting of the Minds with Lake Effect Brewing, who are right down the street here. We did a collaboration with Hagen’s Fish Market, which is right down Montrose. We did a smoked lager – a nice Northwest Side collaboration.

Bart: We would like to do another project with Lake Effect. And we are actually helping Vice District get started. So, we’re looking to do a collaboration with them as well.

Where do you think Finch’s fits into the Chicago craft beer scene?

Bart: I think as far as Chicagoland brewers, the brewery that is closest to us – as far as distribution – is Two Brothers. And they’re in 10 states. So we’re in more than double that, and we’re focusing on other markets. But Chicago is still our home market; it’s our best market right now. You also have to remember, we do not really have a flagship. I mean Threadless is a flagship, and a lot of people know it – but they might think first about Secret Stache Stout. So we have a lot more different styles widely available. Other brewers might have that one beer that is widely available, where their others might be harder to find.

Where do you see Finch’s in a few years?

Finally, if you’re not drinking Finch’s, what’s in your glass?

Bart: Right now I am drinking a fair amount of Local Option. I live with two other roommates so there’re usually a few cases of Old Milwaukee as well. Community beer, ya know.

Steven: Right now, I’d have a Half Acre Pony Pils or the Oktoberfest from Revolution. I also have some grapefruit radlers in the fridge…but those are my wife’s. 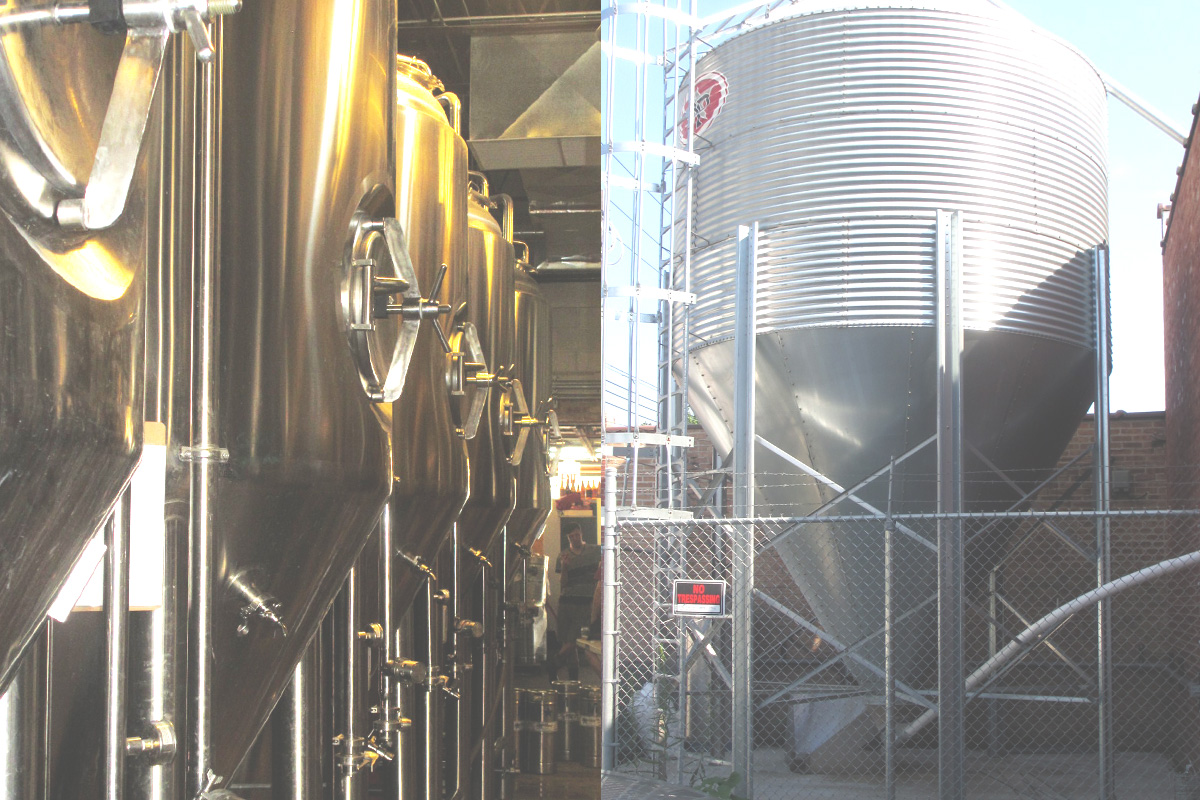 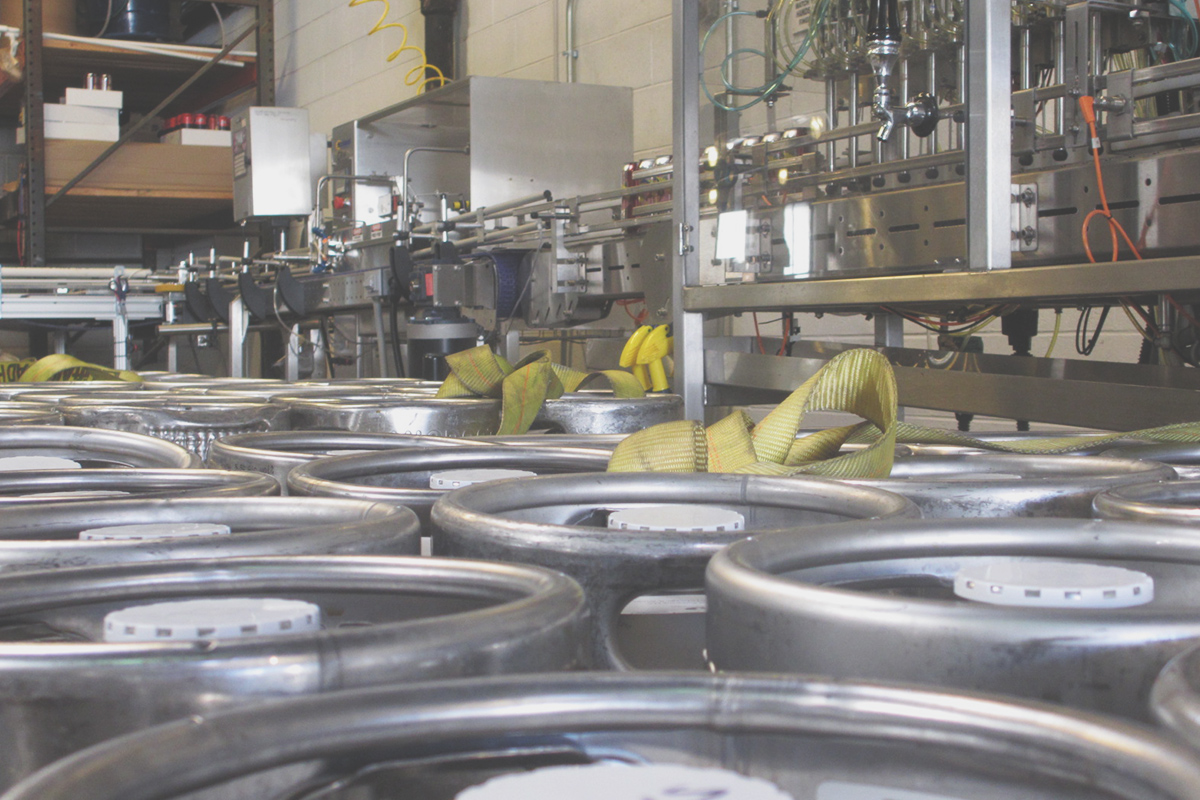 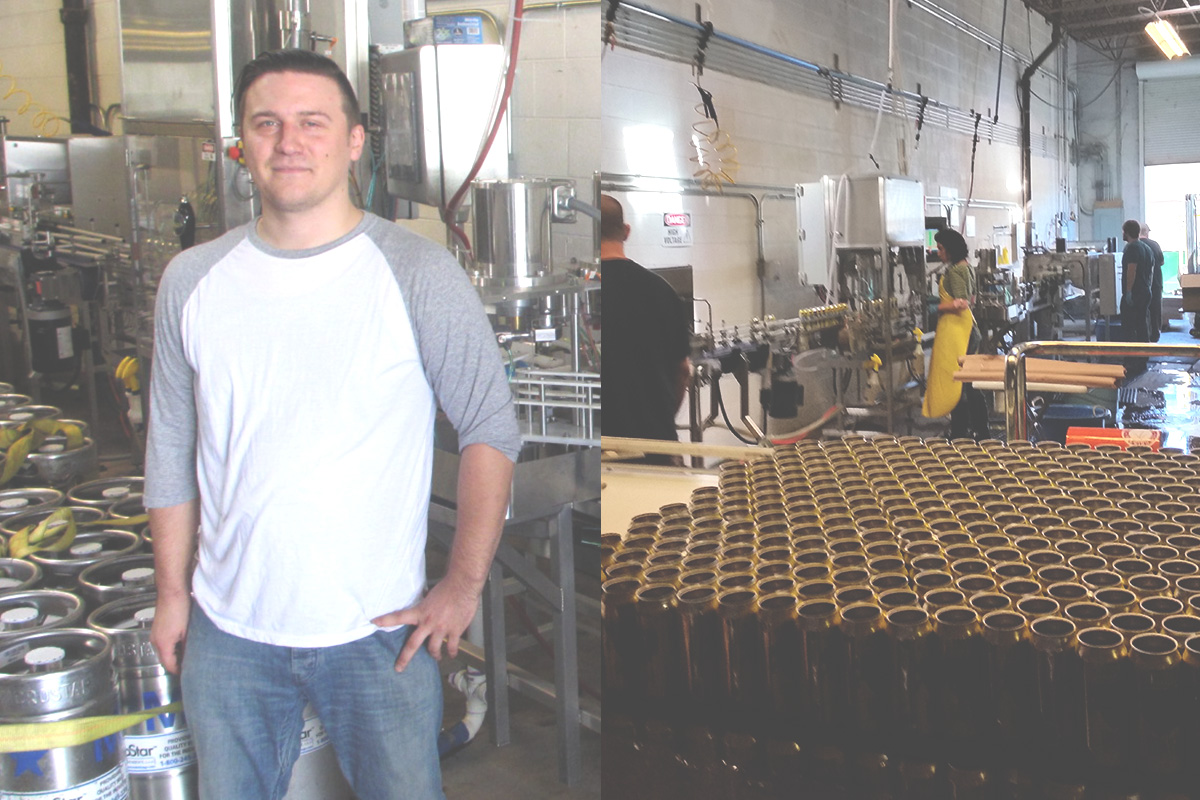 A huge thank you to Steven and Bart for allowing us to stop in, share a brew, and talk shop. To find out more about Finch’s Beer Co., stop by their Facebook and Twitter accounts, and look out for some of that barrel-aged stuff at your local bottle shop. 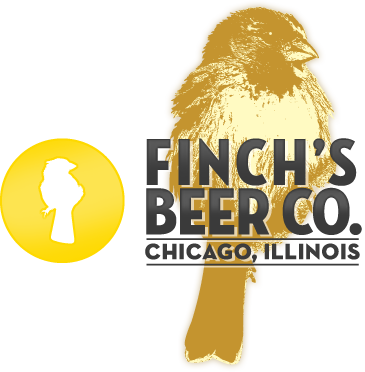