As any craft beer loving Chicagoan knows, one of the best things about living in this great city is our access to all kinds of beers. Whether you love the beer from the guys brewing on three barrel basement setup around the corner, prefer something from one of the bigger boys in town, or like to sample the goods from across the world, Chicago has access to it all.

Having said that, one region that is criminally underrepresented in the city is the U.S. Southeast. Other than a few, usually unremarkable, breweries that have made the trek north, there aren’t many options for the inquisitive Midwestern drinker from that corner of the country.

That changed this week as one of the country’s largest craft brewers, SweetWater Brewing Company, heads north for their official Chicago launch. At the kickoff event at distributor Lakeshore Beverage, we had the chance to pull aside SweetWater “Minister of Propaganda” Steve Farace for a quick chat. On the docket?…why they chose to come to Chicago, what he’s drinking while he’s here, and a discussion on some crazy Georgia beer laws. 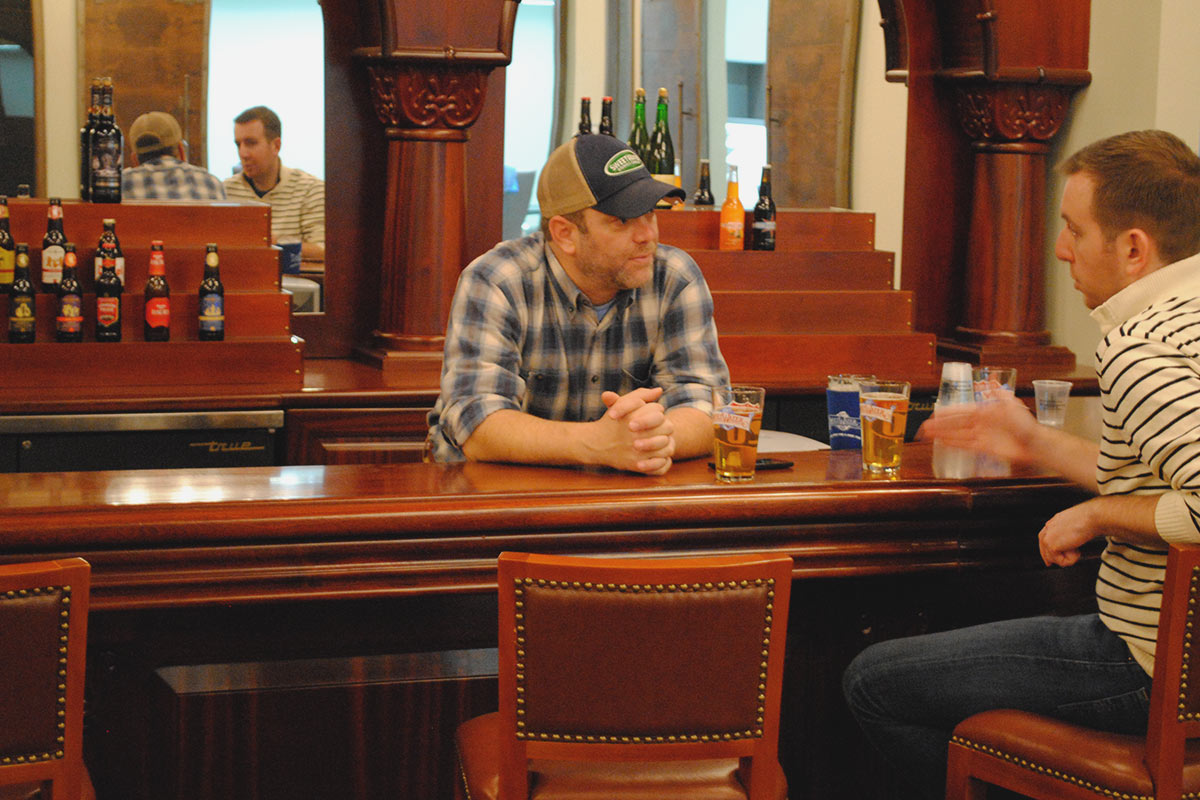 Steve, thanks for allowing us to drag you away from the hoards of thirsty people out there.

So give us an idea of what’s back home at SweetWater HQ.

So we’re in Midtown, Atlanta. If you think of Atlanta as a circle, you’ve got Downtown, Midtown, and Buckhead, which is pretty well known as the party town. Atlanta has a different demographic on the south side versus the north. The wealthier people moved north to the suburbs in the 60’s and 70’s and took all the money with them. In the 2000’s to today, everyone is moving back in to be a part of the culture of the city. Like a lot of big cities, you’ve got the youth that’s in town with that artsy community. That’s been a tremendous transition for the city of Atlanta.

In the center of town you’ve got two highways that merge, called the Connector. We’re right at the northern side of that Connector, right smack in the middle of it. We’re in a really good area and it’s super easy for people to get to. We get 150,000 people a year that come through our brewery for tours. We do tours two hours a day.

We’ve heard some crazy beer laws in the past and it sounds like Georgia is right up there. Since you’ve been around since the ’90’s, how has SweetWater managed to work around them?

The law in Georgia was written in about ’92 when they finally legalized breweries. Breweries can do tours and tastings but it was never defined exactly what that was. People would come into our original brewery, which was in the hood – Fulton Industrial Boulevard – on the west of town. They’d show up, and if they were brave enough to come out there, we’d serve them some beers. We’d give them pint glasses and most people would take the glass. So we thought, alright let’s charge a few bucks to cover the cost of the glass. We don’t care about the beer, we’re just glad that they’re out here. So we charged 3 bucks. And it kind of grew from there and it became the law for Georgia.

From about ’97 through 2004 we were in that original space. We eventually had to start giving out tickets to people because some were just getting wasted and it was irresponsible for us to give them that much beer. So we started giving out tickets and pouring about half a pint for each ticket. The ten tickets worked it’s way down to six… and that became the law. The things that we did out of our own ideas of what we thought was responsible became the law for state breweries. You’re allowed to sell a souvenir glass, but you have to offer a free plastic cup as an alternative. You have to give out tickets because you need to control how much people consume. 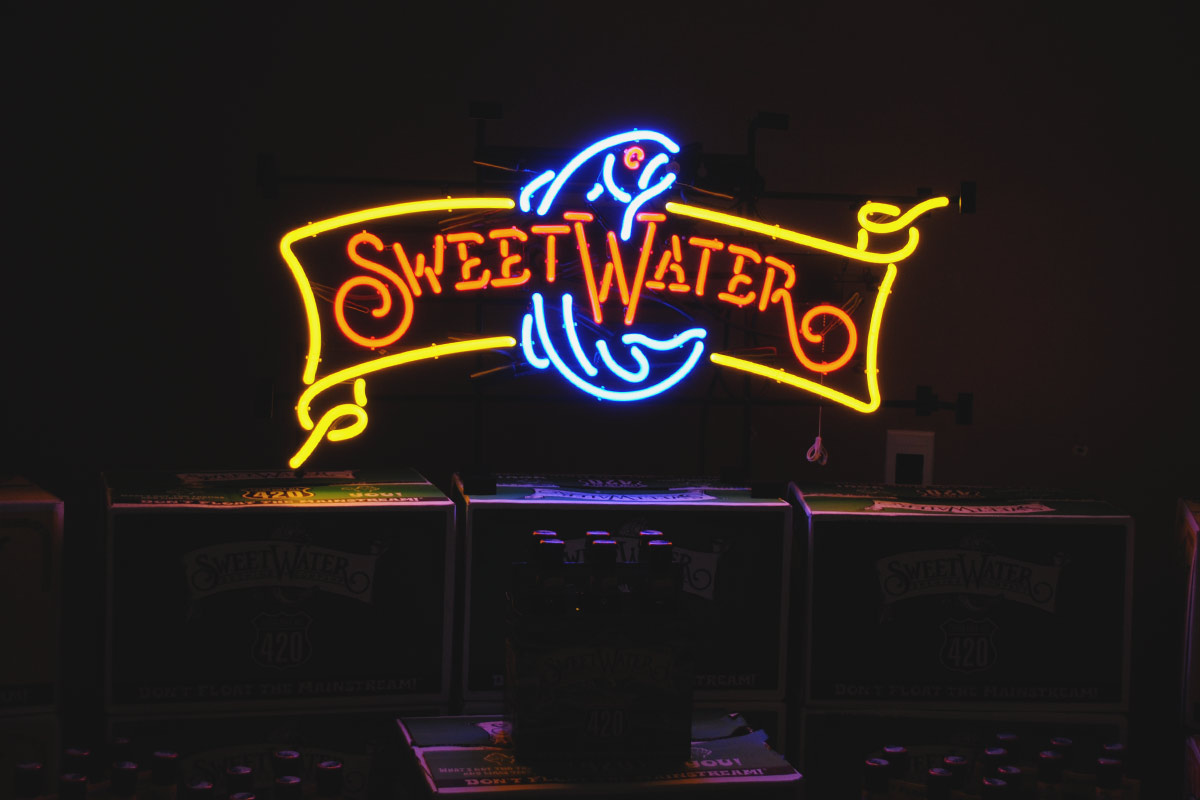 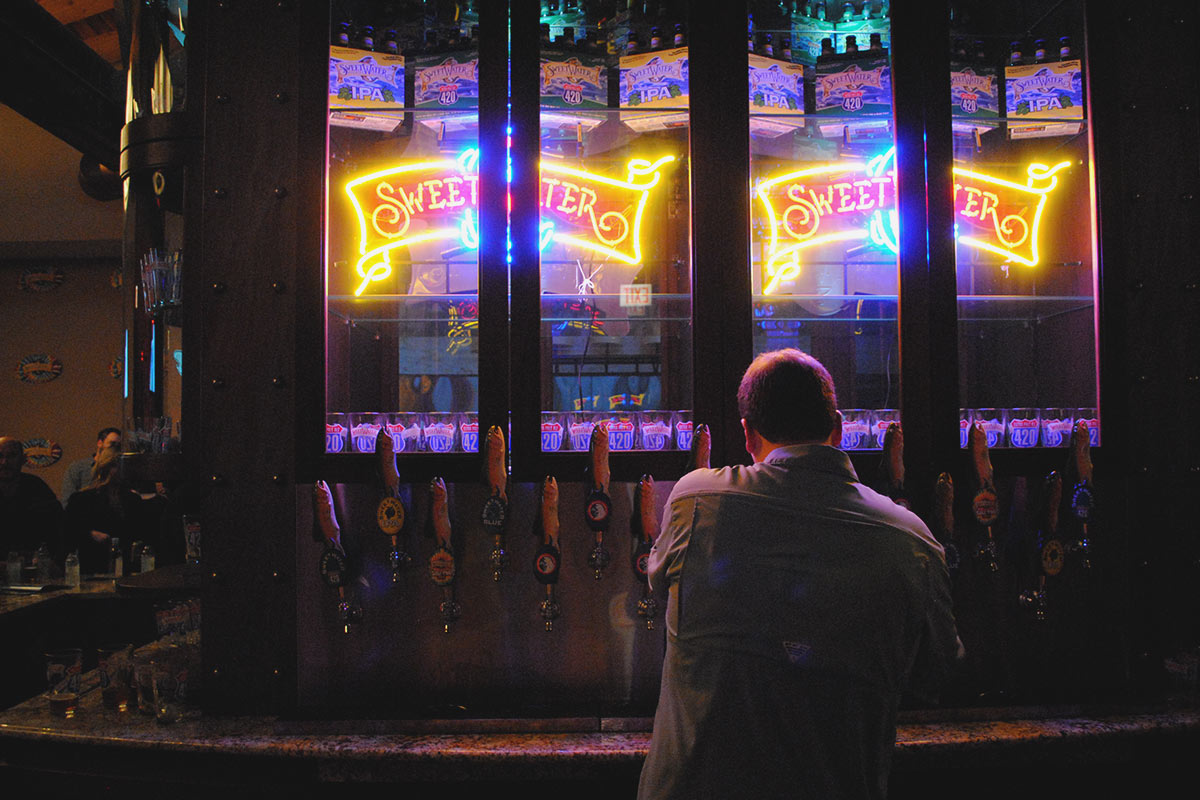 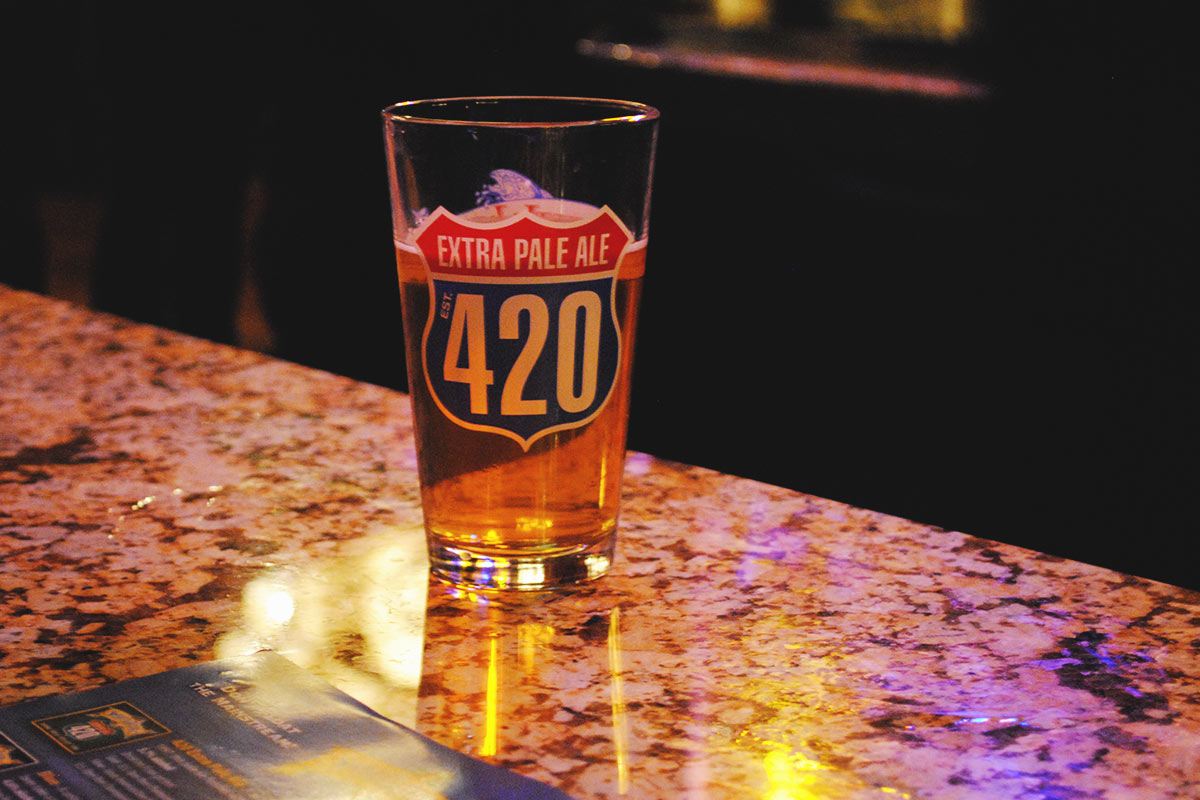 I imagine Georgia is going through a craft beer revolution like the rest of the country?

Oh it’s huge, in the last year there have been about a dozen production breweries that have opened in metro Atlanta.

The current laws seem like they’d be detrimental to those startup breweries.

It’s really tough for them. When we started there were only three local breweries. So it was easy for us to find a distributor and a little footing.

So is there a push to change those laws?

Yea, the Georgia Brewer’s Guild has gotten really tight, really involved, and really progressive on working with the three tier system to try and pass some new laws. There are laws that are being put through the house and senate right now that will be really helpful.

So why Chicago? You probably had a lot of potential market options when you decided to head north.

We’re looking at it from a strategy standpoint and also from a relationship standpoint. You’ve got to have a city that’s accepting of craft beer. Who gets us? Where would we be successful? Chicago is obviously a phenomenal town for craft beer. Beyond that, you’ve got to have a distributor you have a good relationship with and really believes in the brand. These guys from Lakeshore are phenomenal. We do business with them in Memphis and Tennessee and we have a great relationship with them. They know us and we know them. If you don’t have a good distributor in the city you may as well not sell your beer there.

So what do you know about Chicago? First time here?

I was here all last week and I was actually born in Forest Park. I was in Libertyville till I was four. I don’t know the area at all though; my family moved when I was a kid. 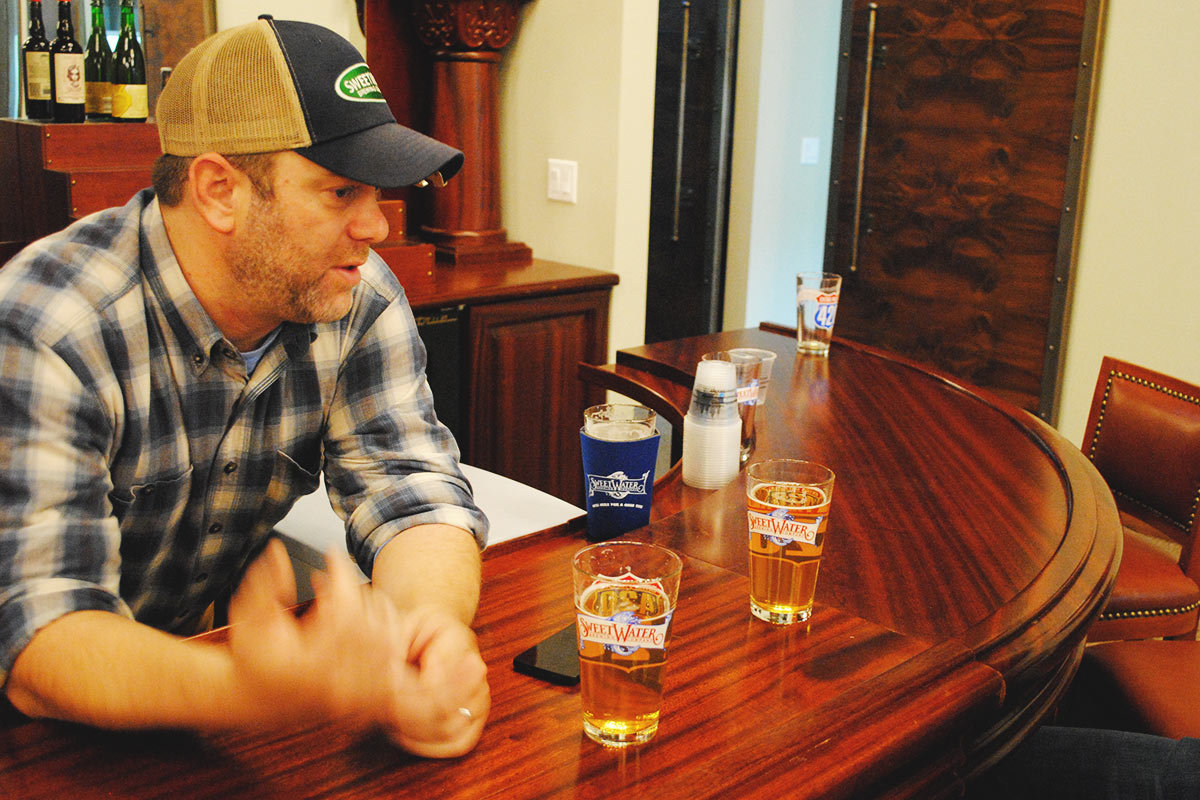 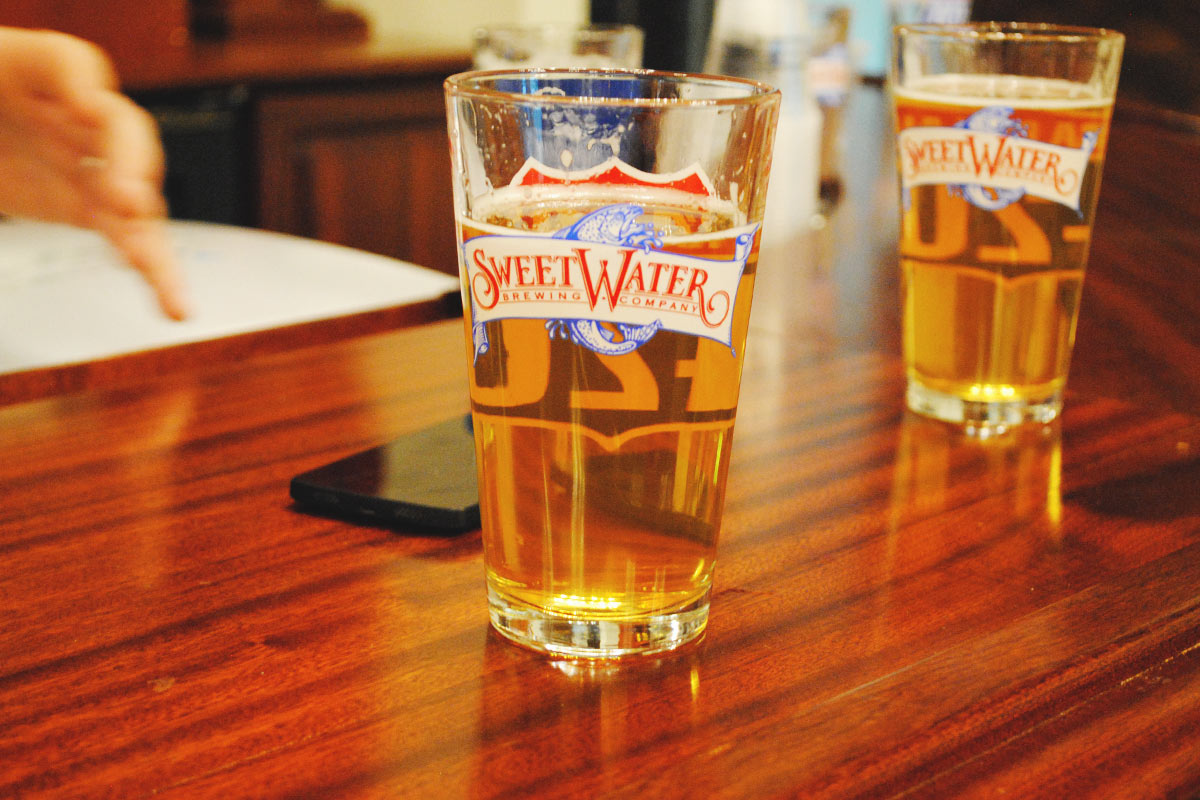 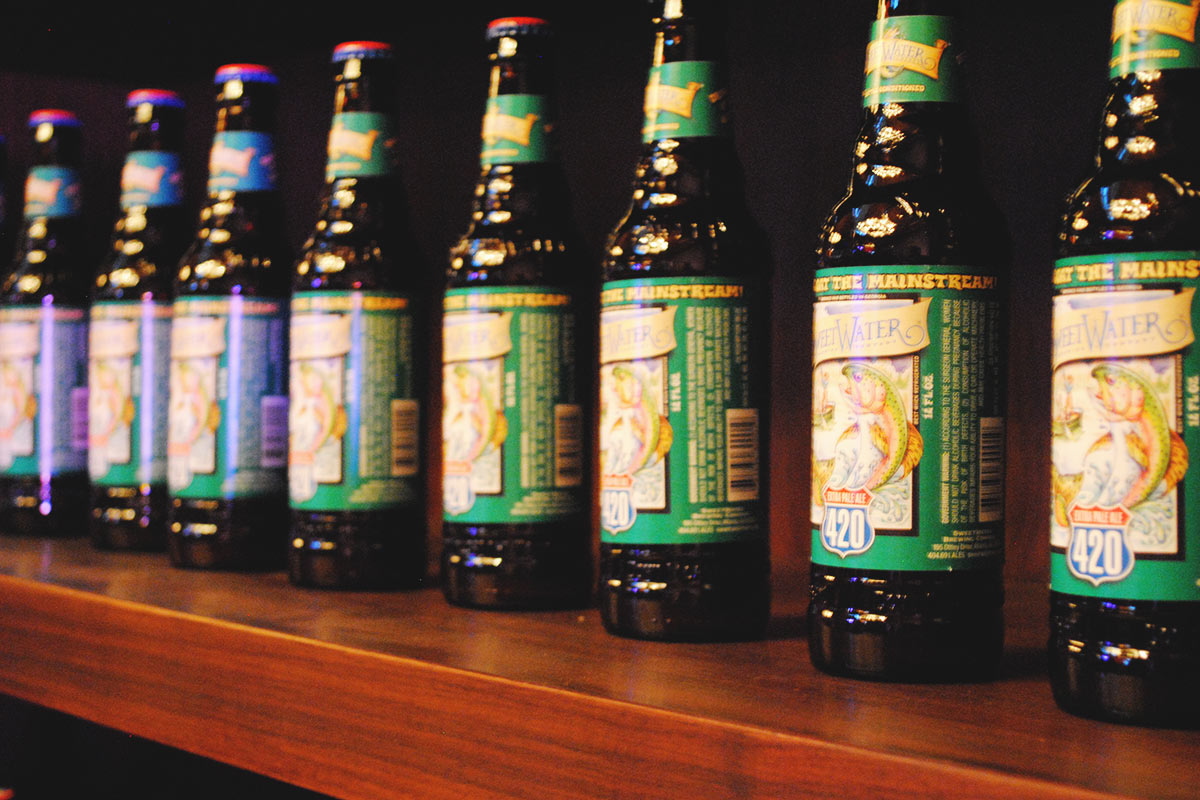 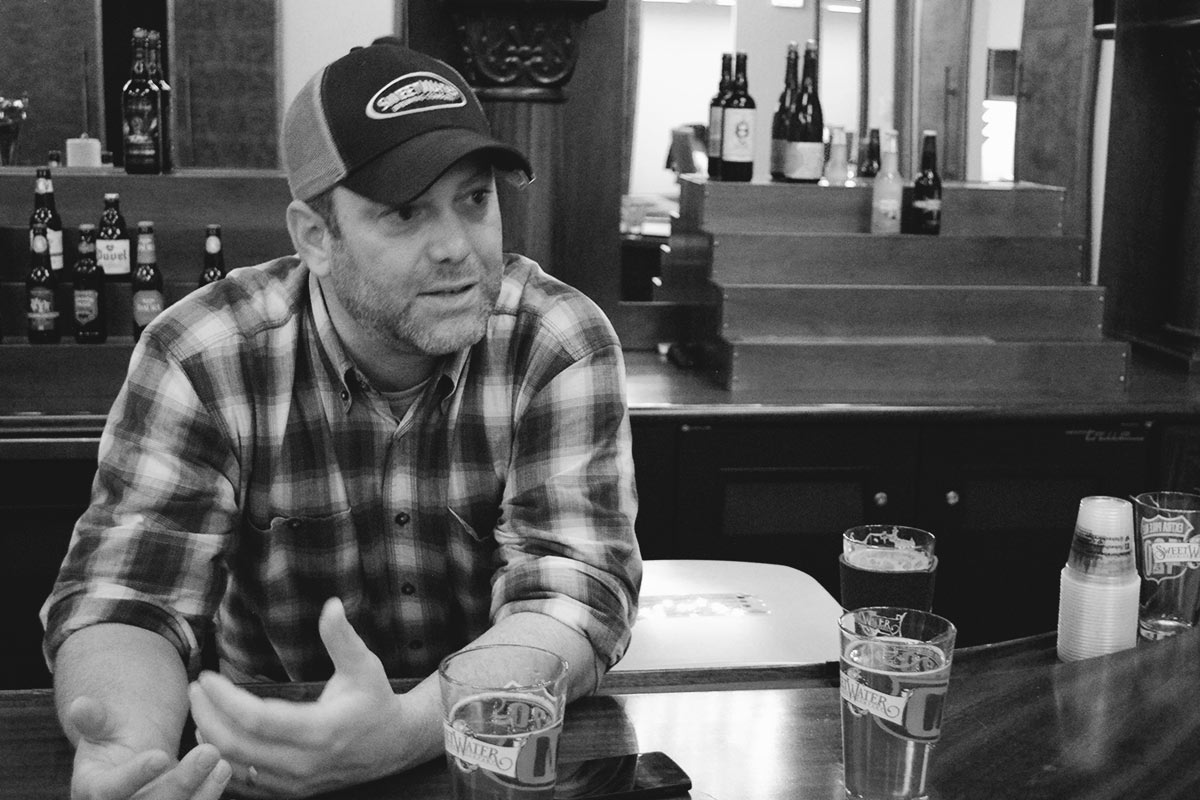 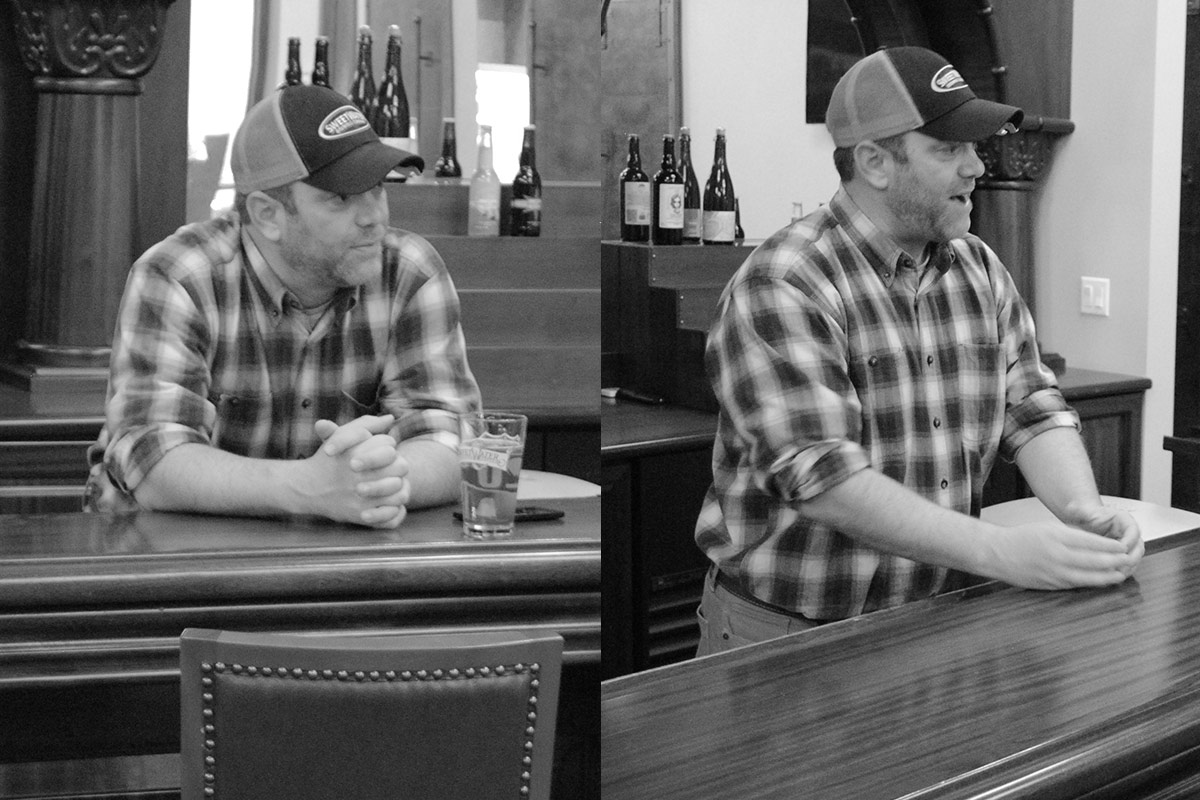 Got any plans for any Chicago breweries or beer bars while you’re here?

Yea, we have 90 events going on around town this week. There are about a dozen of us. Mark Medlin is our brewmaster and was the head brewer at Goose Island six years ago.

That’s a great connection to Chicago. There are a ton of area breweries that have been started by ex-GI employees.

I’d heard that and I want to make a list for us as well. I could name ten breweries that started with ex-Sweetwater brewers. It’s amazing. We didn’t really even think about it. We kept losing people, and that happens, people move on. But they’re all excited, and proud, and protect us wherever they end up.

If you’re not drinking SweetWater, what’s in your fridge?

Whatever I can find locally. That’s the cool thing about where we’re traveling and where we’re going. We find local beers that the town really loves and supports. We can see what they’re doing and what they’re all about. Last week I was up here and I probably drank 30 different local beers. Some were great and some were not so great.

What was your favorite?

Revolution really stuck out to me. Those guys definitely stood out. It became kind of a go-to as I tried something I didn’t like, I’d go back to it.

Can you describe your beers in a few sentences?

We are traditionally a fairly hop heavy brewery. We’re big on the aroma and being approachable. I think that’s a great description for a few of our beers. The Blue is kind of a gateway beer from a craft standpoint, a nice lighter style wheat ale, to 420, which is incredibly approachable for anybody in that craft spectrum. Whether you like big hops or  something a little more sessionable. Our IPA is dynamite. It’s 6.3% and got big, floral, citrusy aroma to it.

Cheers to that! Congrats on the launch and we’re looking forward to seeing more of SweetWater brews around town. 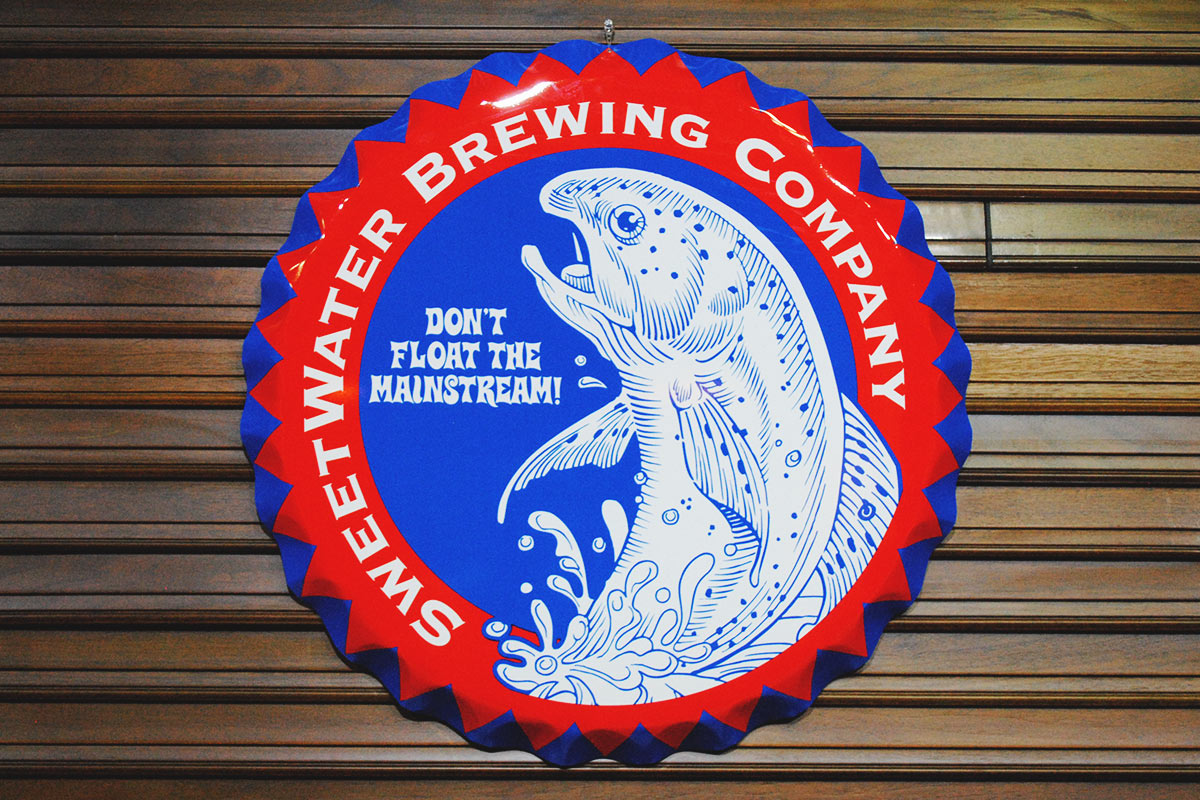 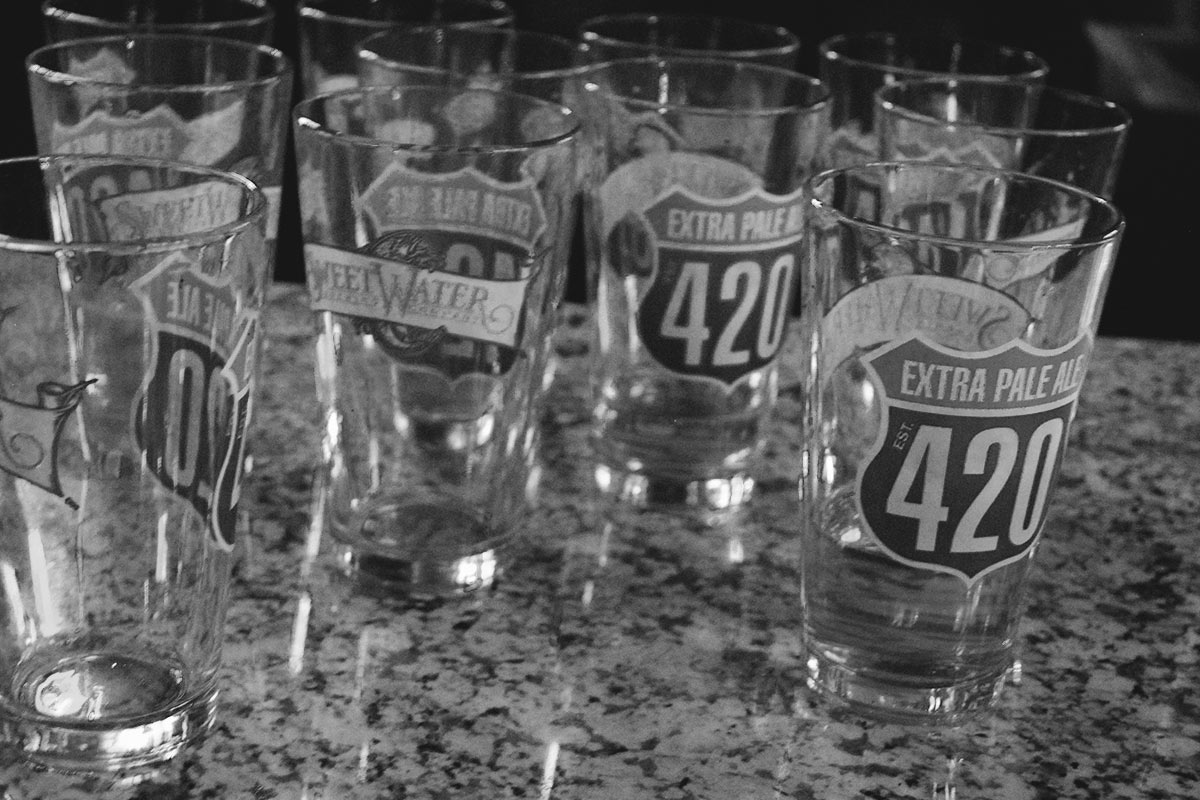 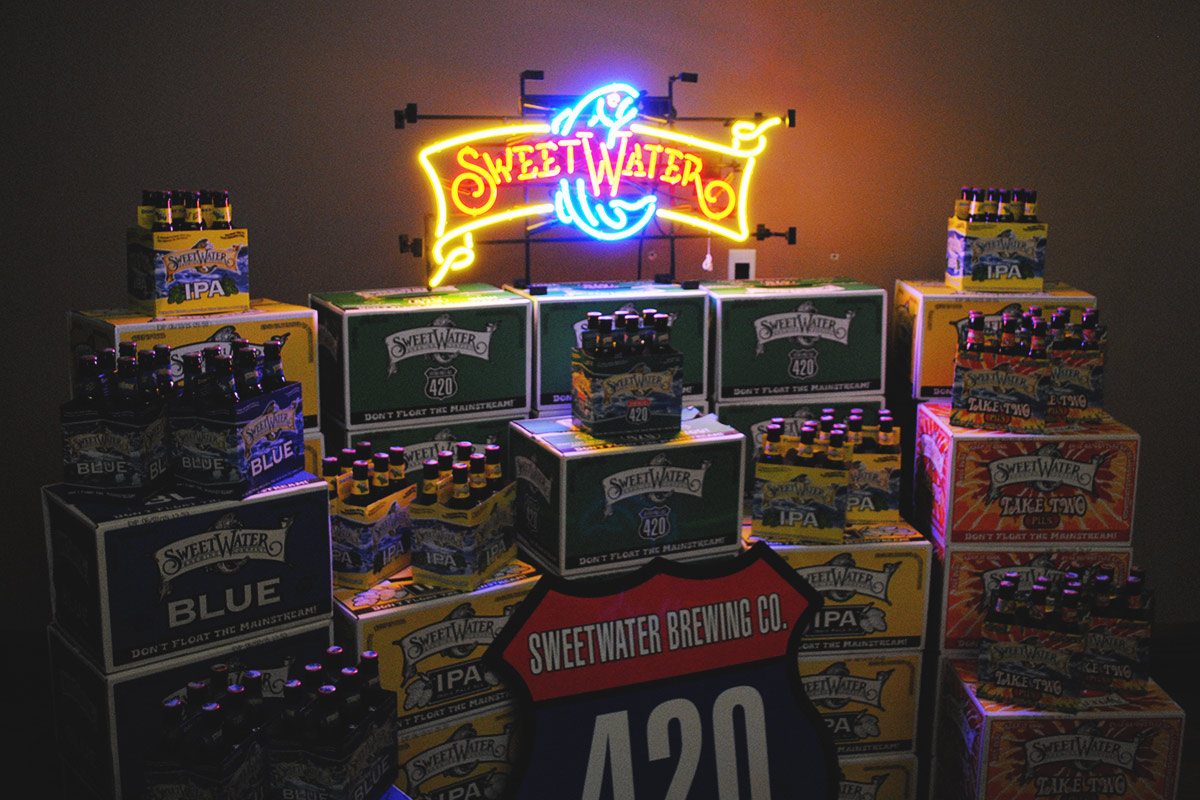