While Hawaii may not be well known for their beers here in the Midwest, a recent visit to Maui Brewing Company suggests they should be. Maui Brewing Company makes a wide variety of beers, but they are best known for their four flagships: the Coconut Porter, Bikini Blonde Lager, Mana Wheat, and Big Swell IPA. It’s unfortunate these aren’t currently distributed to the Midwest, because they would definitely pair well with a hot summer day on the shores of Lake Michigan.

Maui Brewing not only makes great beer, they also go to great lengths to be mindful of the environment. They currently have a solid solar energy program and are working hard to soon be 100% off the grid. The Maui Gold pineapple found in the Mana Wheat, the coconuts in the Coconut Porter, and other ingredients are sourced from local farmers in an effort to support the Hawaiian economy. We caught up with Director of Brewing Operations, Darren Moser, on a recent trip to the island’s new brewing facility. We talk pioneering Hawaiian craft beer, expansion, and how the mainland has influenced their growth. 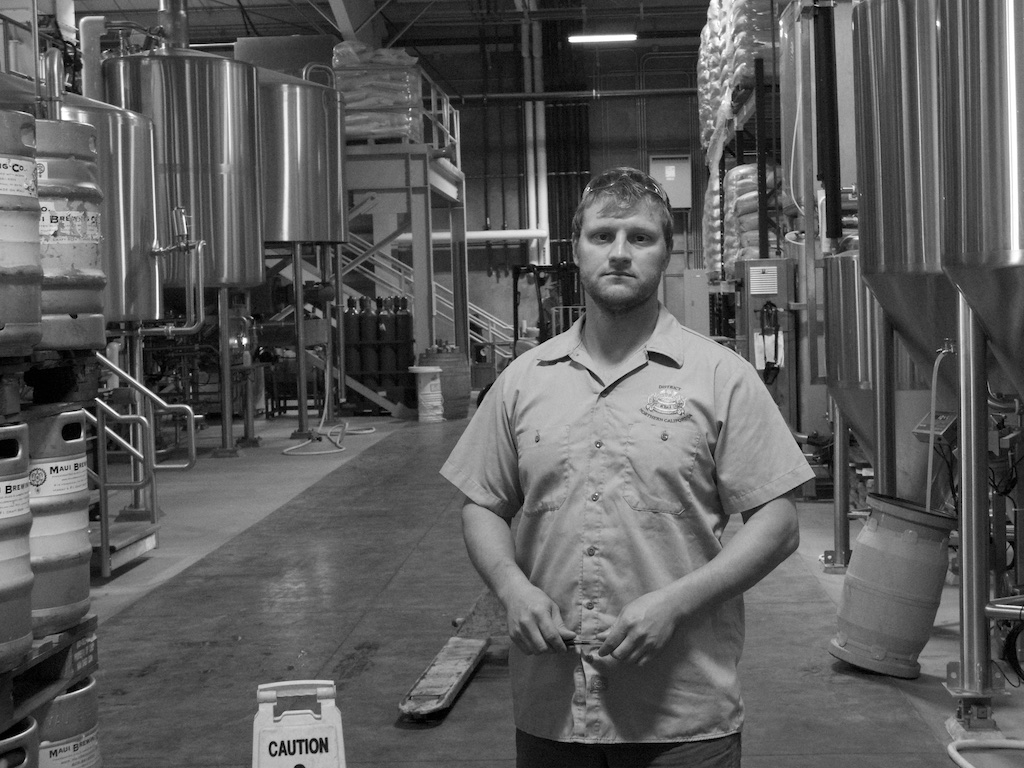 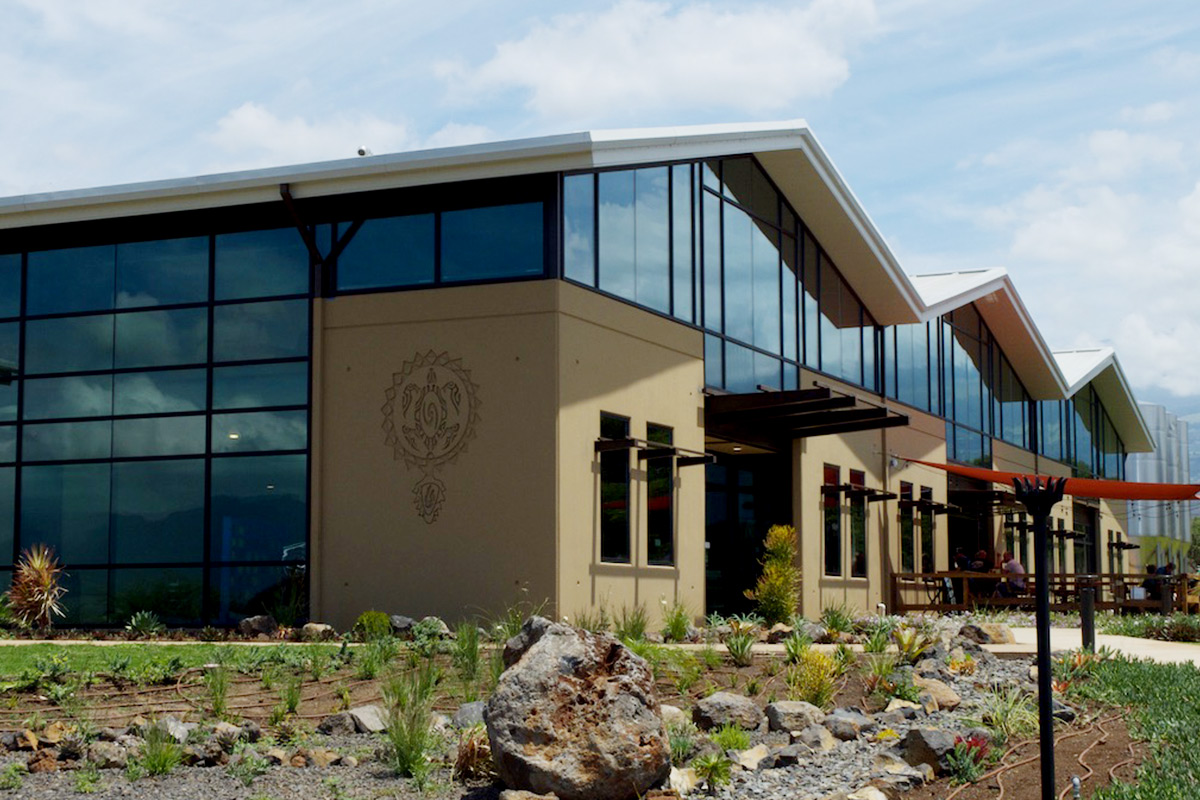 Darren, thanks for sitting down. How long have you been with Maui Brewing Co?

I’ve been here about two and a half years now. I moved here to work at this brewery and largely to assist with the build out of this new facility. It’s been a lot of work and stressful at times, but it’s been a wonderful experience.

Where did you get your feet wet in the brewing scene?

Prior to Maui Brewing Company, I worked at Trumer Brauerei in Berkeley, CA. We made Trumer Pils there and I was there a little shy of eight years. I worked as a shift brewer, lead brewer, and production manager before I moved on to come work here.

Now that you’re here, how prevalent is craft beer in Hawaii, versus where you started?

We are starting to see more craft beer on the island, especially recently. We partnered with Stone Brewing to bring in some beers from the mainland, which is nice. Ultimately, what I see is people continuing to turn to Maui Brewing.

Sounds like you’ve something of a pioneer for the local scene. How has a relatively new market affected what you do?

We have an incredible amount of creative freedom here. We make a huge number of beers that people have never hear of, mostly because there hasn’t been a ton of craft beer on Maui. So having the brewpub up north and now the taproom here, Maui Brewing, kind of by default, has become the source for craft beer for essentially a small town in the middle of the ocean. So that being said, that ends up fueling us to create a number of different styles to fill all the niches that craft beer typically provides. Maybe five breweries in the Midwest fill all those niches but here we only have one. 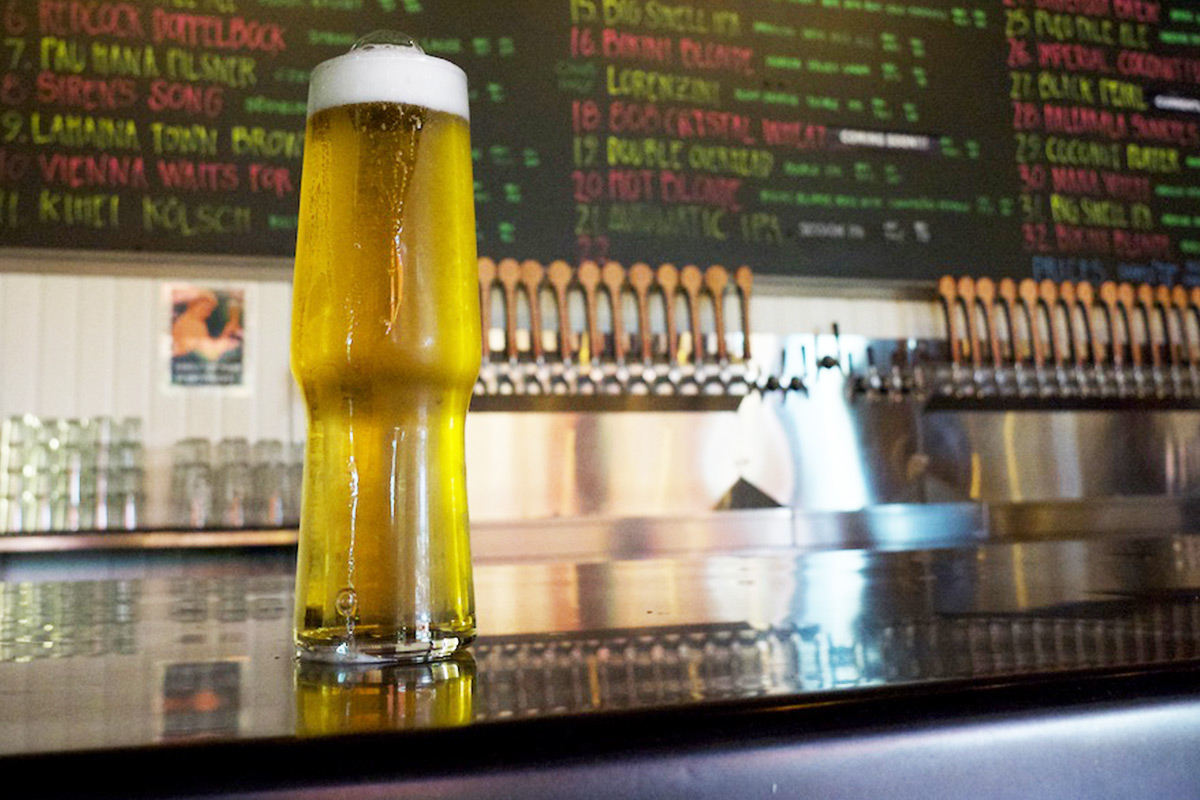 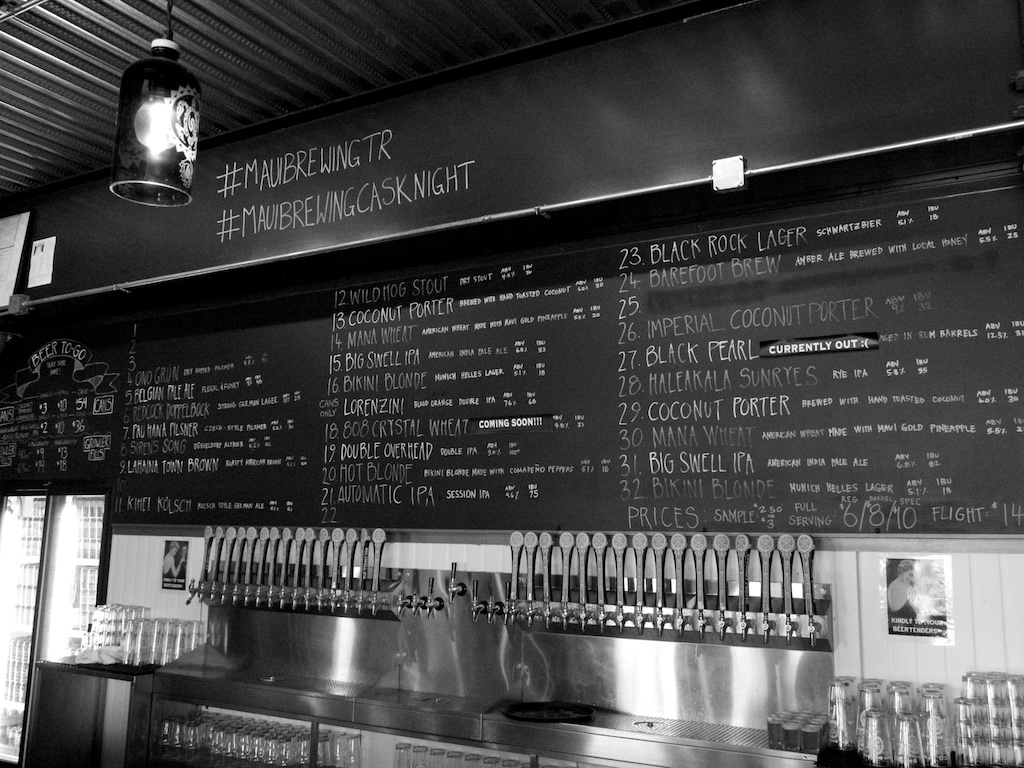 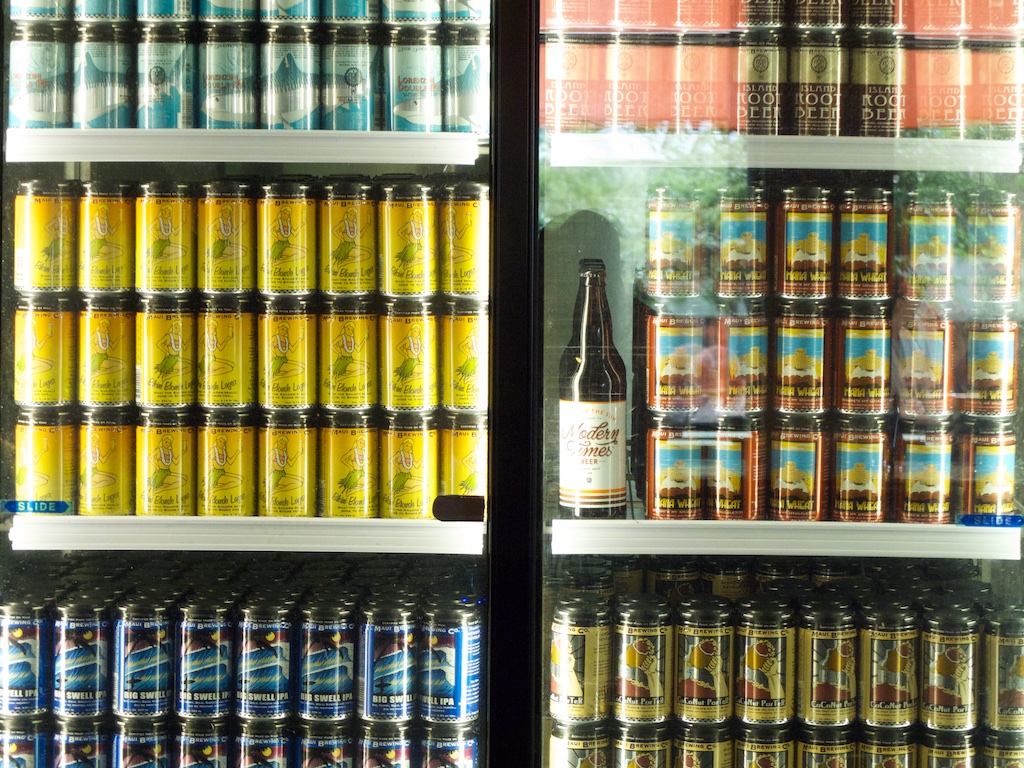 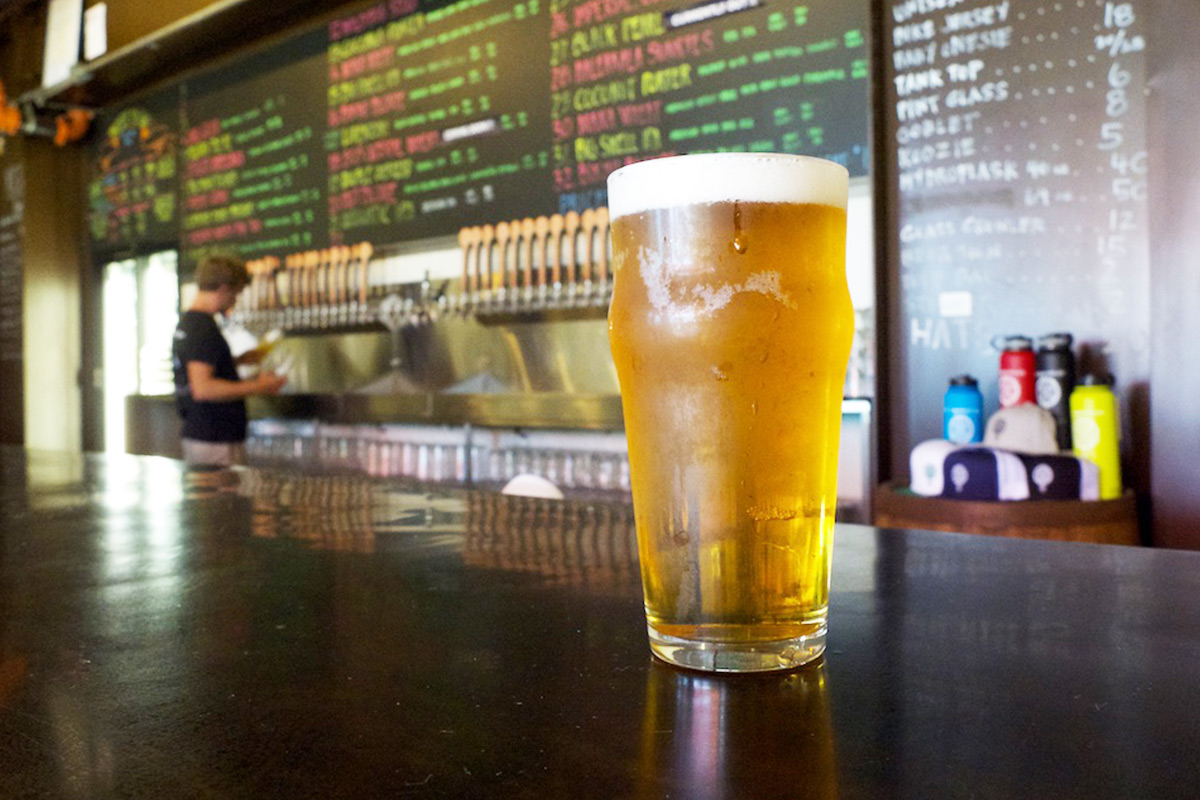 How does living in a “small town in the middle of the ocean” influence your brewing? That must be a unique challenge.

As far as the small batch stuff goes, we have, and do design beers around the ingredients that we can get on Maui. Let me put it this way, on Maui we do not grow barley malt or hops. We do have pineapple juice, Maui cane sugar, bread fruit, and we have pumpkins that are locally grown that go into our pumpkin beer once a year. So anytime we can use a local ingredient or find an excuse to use a local ingredient we do. We use Maui honey in both our root beer and our Barefoot Brew. That’s really important to us.

How are you able to give back to the local community as many mainland brewers try to do?

We have farmers that we reach out to. Not that it’s terribly atypical for spent grain to go to livestock feed. However, on Maui, where we do have farmers that are raising hog and cows, anything they are feeding has to be brought in somehow. So while it’s not necessarily unique for brewers spent grain to go for feed, here the farmers greatly appreciate it because they’re not used to that type of resource. It makes it unique since people depend on it more.

Have you done or do you have any plans to get into barrel-aging?

We don’t have an extensive barrel aging program at this time. Historically, we haven’t had a ton of space and our climate is fairly aggressive here as well. Now with the new facility, we will start to examine our options with that. We have done some barrel aged stuff though. We have one now called Black Pearl. It’s an Imperial Coconut Porter aged in rum barrels. That’s a good one. That’s a beer that we’ll continue to produce periodically. 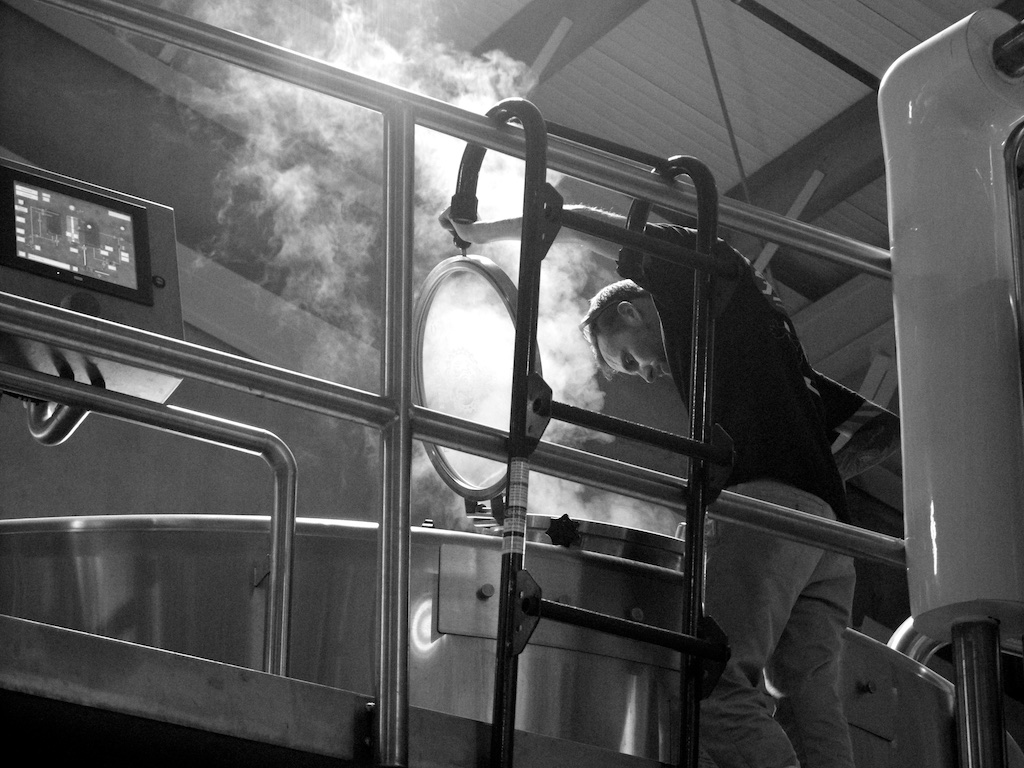 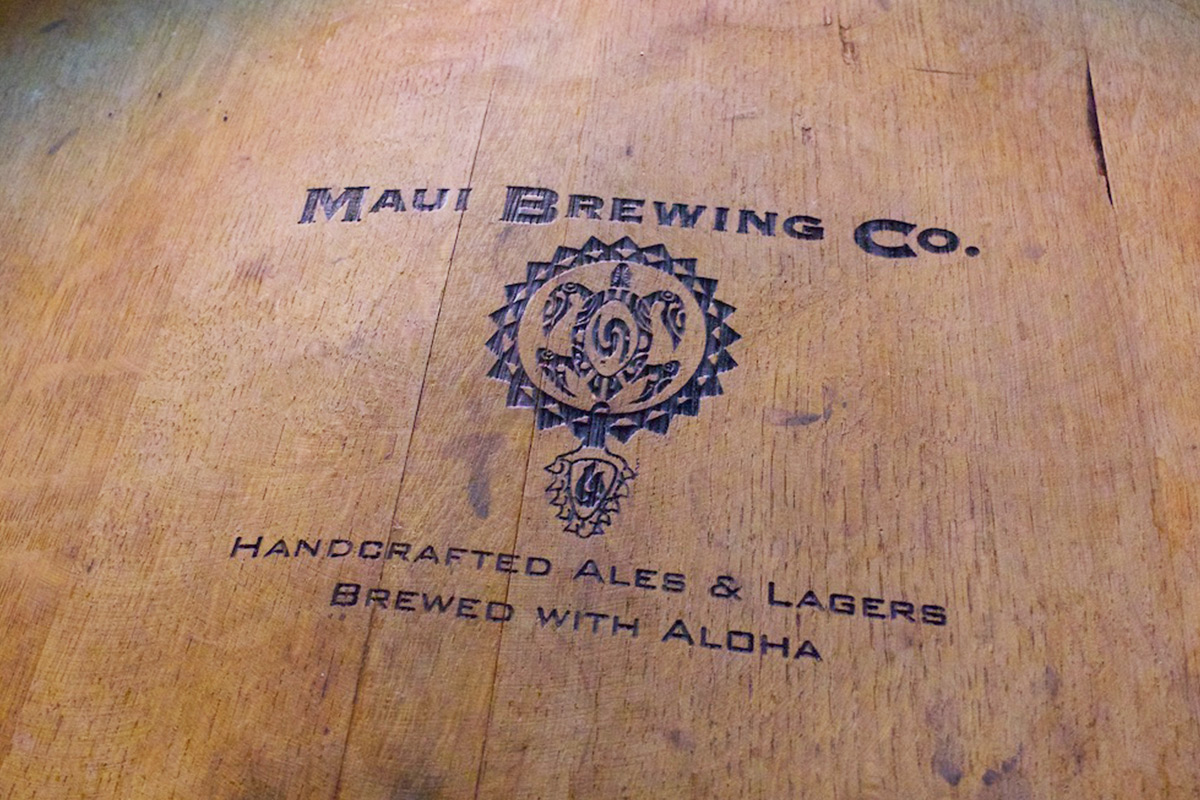 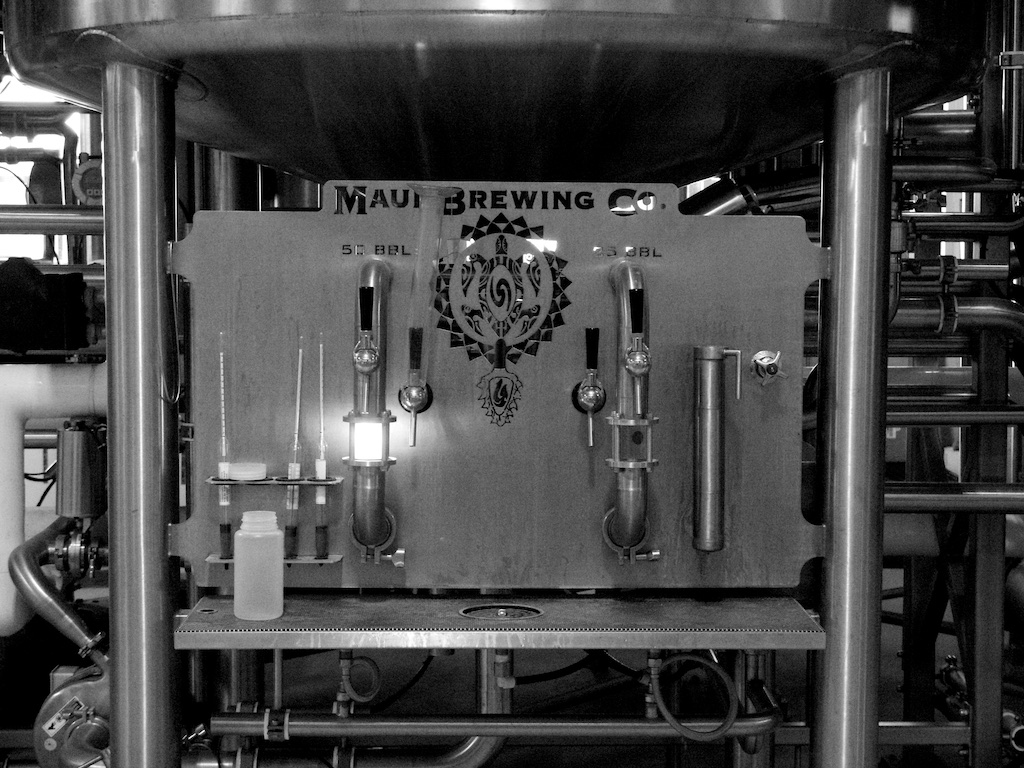 Garret, the owner is a very dynamic fellow. He makes it a point to keep a strong connection with the brewing community, as we all do as brewers. All of our brewers are not just brewers, but avid craft beer fans as well. When you throw out names like Bells, Founders, New Glarus, they’ll take those beers anytime they can get them. The craft brewing industry in general is relatively neat that way in people pay attention to what others are doing, are influenced by them and maintain close friendships with them.

I love them all. I guess it depends whats going on that day. Sometimes I think our Bikini Blonde is hard to beat. If I’m looking for another light beer I’d go with Ono Grun which is the dry-hopped Pilsener. I really like our Lahaina Town Brown. Brown ales don’t get a lot of press but that is a Marris Otter based malt. It’s really well rounded beer that throws out some chocolate, roasty flavors. Double Overhead IPA, I’d stack that up against any of those other double IPAs that people wait in line for.

We’ve read you’re currently distributing to nine states. Are there plans to expand that with the new facility?

It’s bigger than ever now. You have to remember that a lot of the beers out there, prior to this facility, were brewed in 7-10 barrel batches. 10 barrels is 20 kegs and those never made it off the island. Maybe one keg here and there to a festival. So even in the nine states that we were distributing to, even two years ago, they were really only seeing Bikini Blonde, Big Swell, Mana Wheat, Coconut Porter and an occasionally limited release.

With this facility, we’re able to make more of it so they will start hitting the mainland in our current markets. We’ll get to more states eventually, but we want to get more beer to the places we’re at already.

If you aren’t drinking Maui beer what’s in your glass?

I guess I’ll start by saying I’d probably prefer a Maui beer because I know the guys who make it and I’m incredibly proud of the crew we have working here. That being said, I know they are being looked at kind of differently because of the volume the produce, but Sierra Nevada is an icon. Their ownership is to be respected immensely. Ken Grossman and his family do a really nice job there. They are continual innovators and their facilities are the best of the best. There’s such a pride there. Yes they are getting bigger, but they still do a good job.

I’m originally from Pennsylvania, I really like Tröegs beer. Whenever I get back there I always enjoy seeing what they are doing. And I don’t know what the public opinion in the craft beer world is but I have to add Yuengling. I remember trying to decide what I wanted to do with my life and visiting the historic Pottsville brewery was really a neat experience. 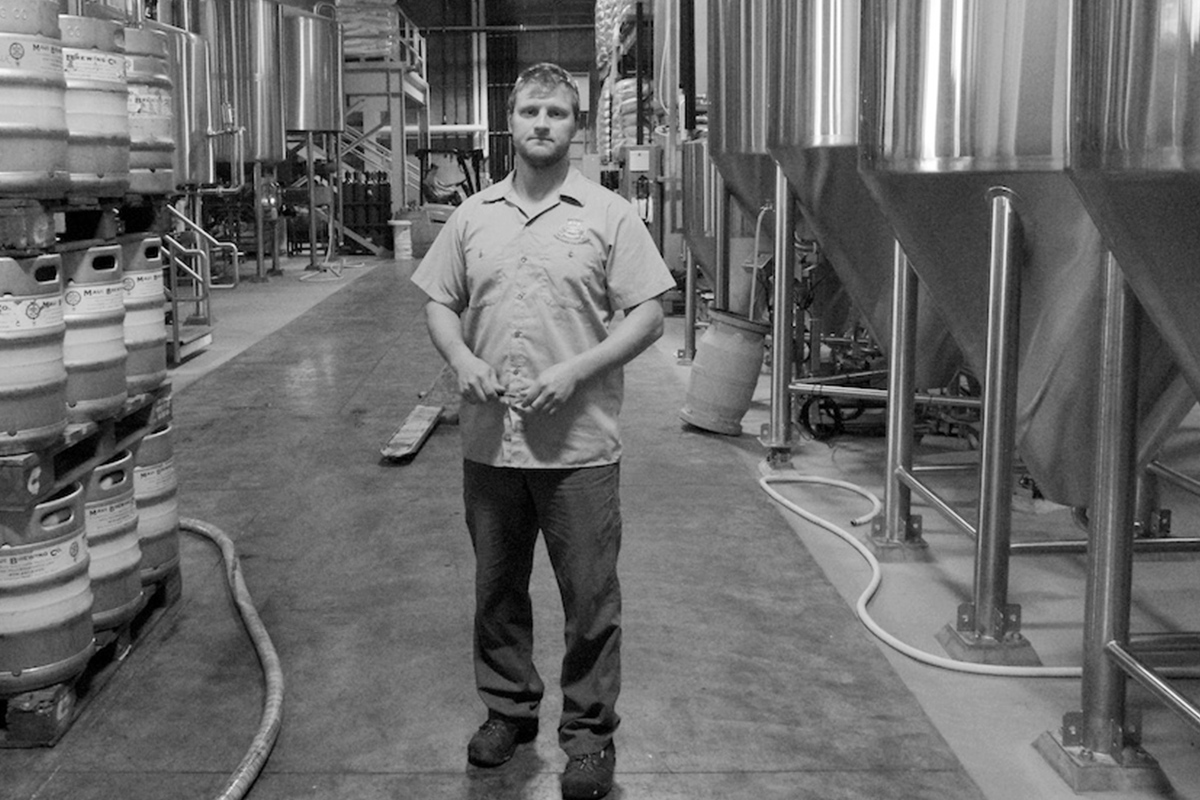 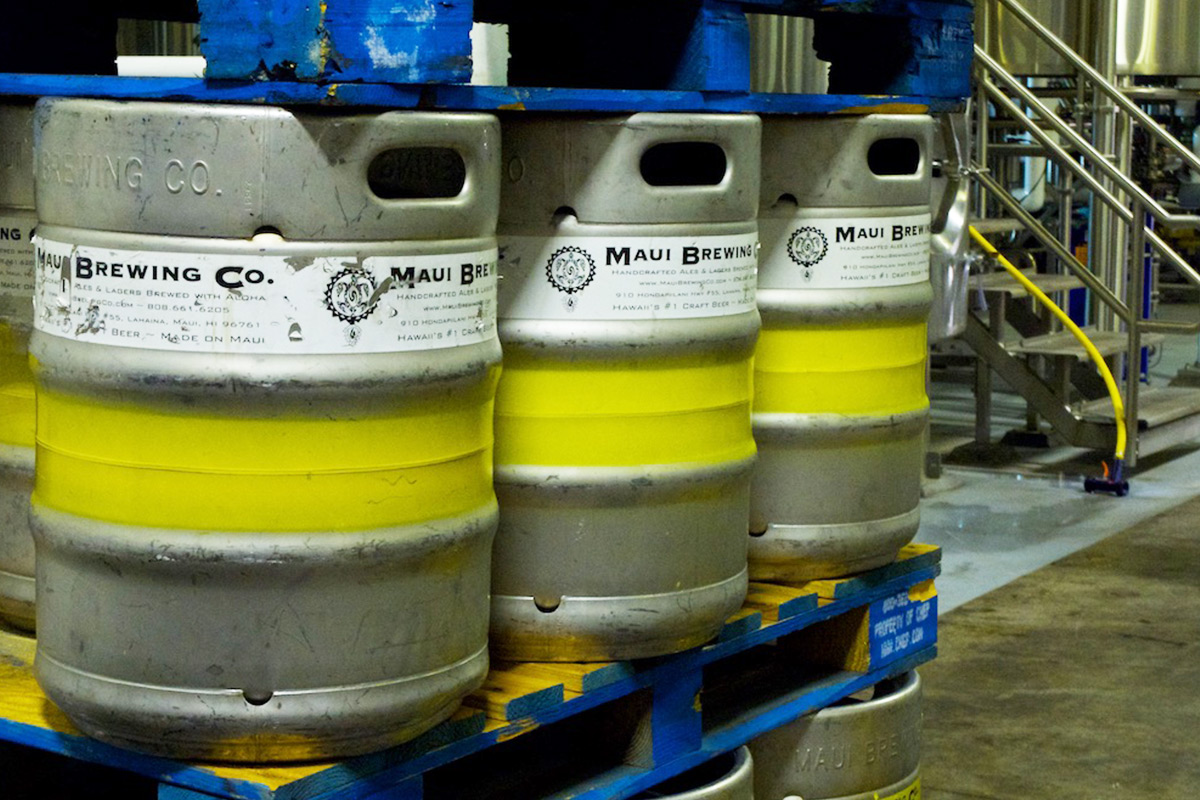 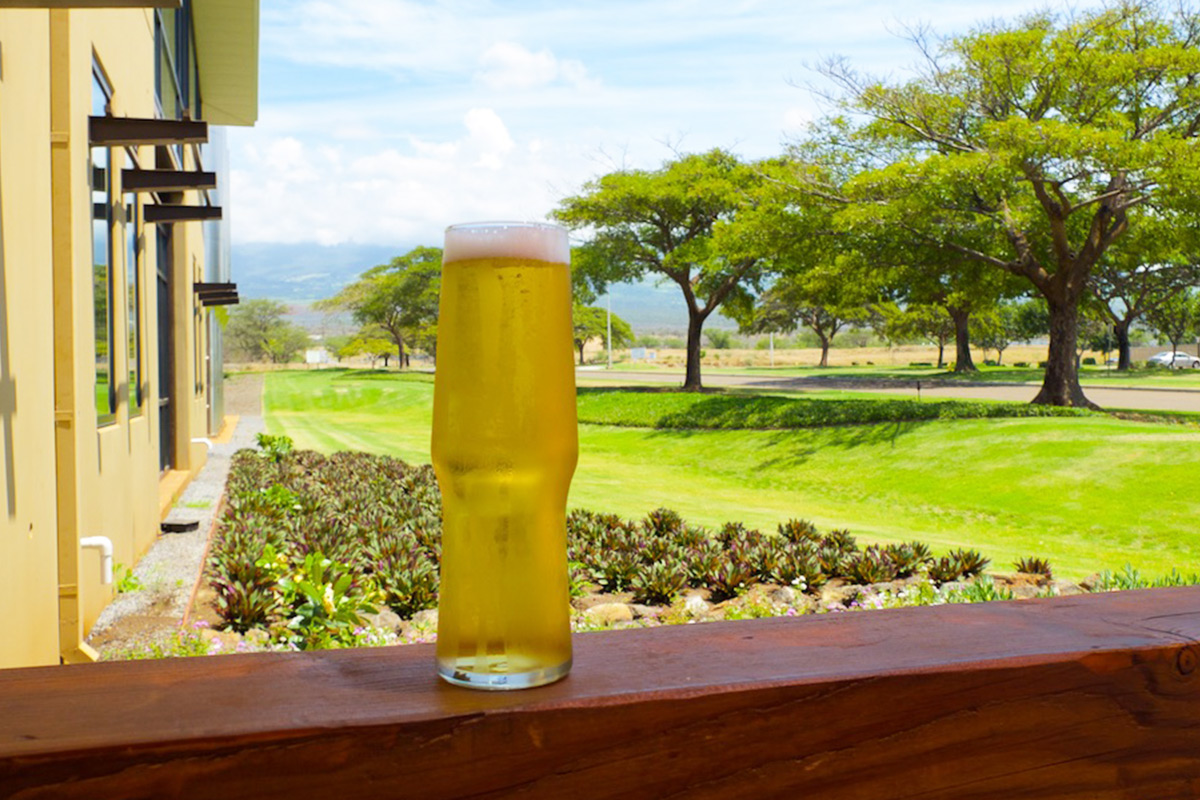 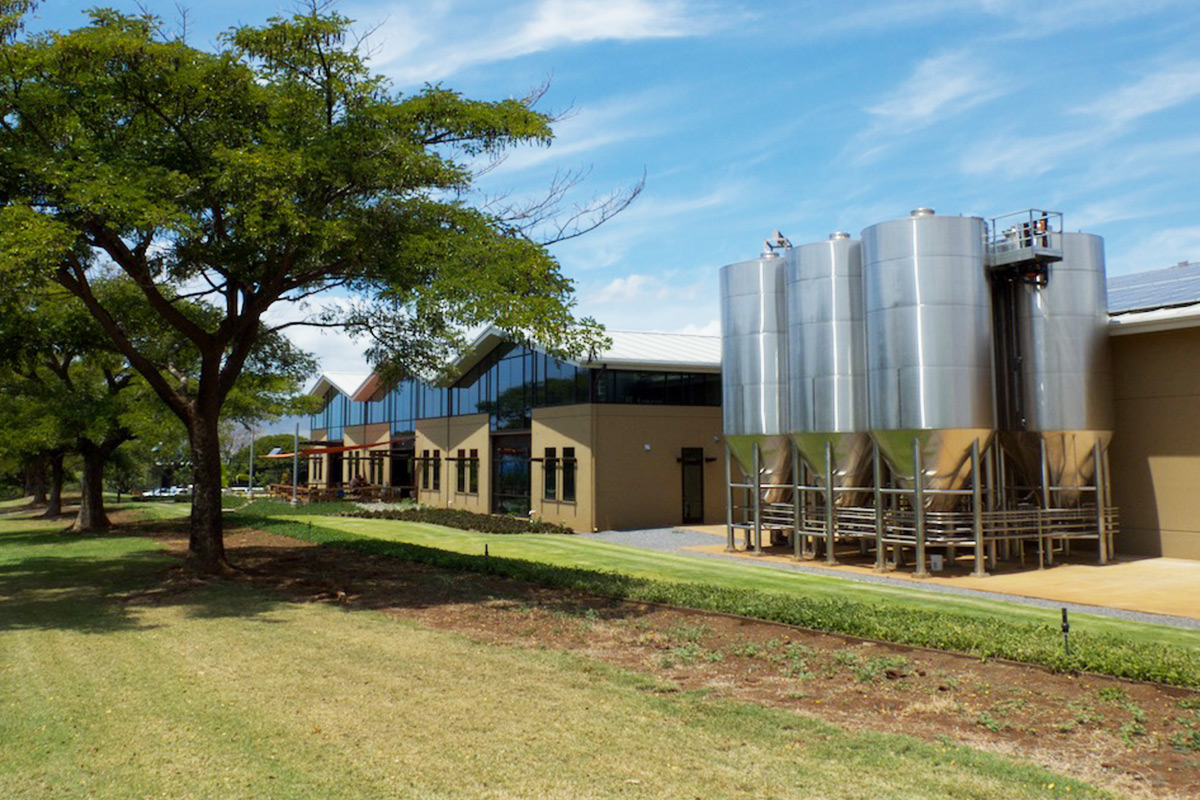 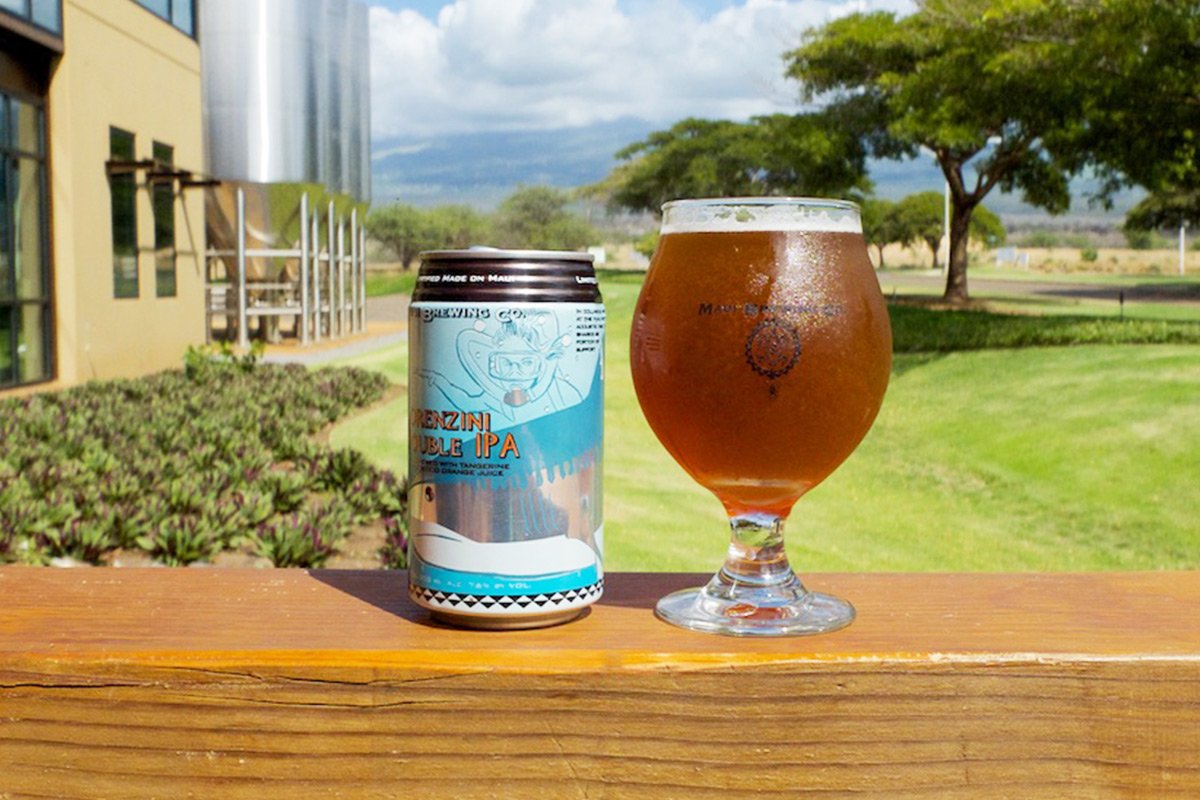 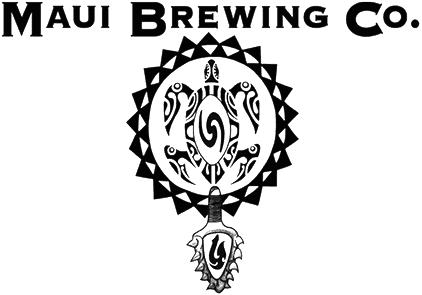