Round 1 is in the books and was nothing short of ‘madness,’ totaling 7,723 votes among the 16 breweries. Two (1) seeds fell to local brewpubs, and in the West Region a (3) seed took down a (2). Overall, there were some surprising separations of victory. Will Round 2 continue the chaos, or will the higher seeds tighten their grip on the Final 4? Only you, Chicago beer drinkers, can decide.

Click HERE, for a full breakdown of the brewery qualifications and Round 1 matchups.

So, vote for your favorite remaining Chicago breweries, below, and we will tally the votes to select a “Final 4” for next round.Voting for Round 2 concludes Sunday, 3/27 at 7pm.

It’s the battle for Northcenter supremacy. Their often-packed taprooms are mere blocks from each other and they share many fans, citywide. Where will those allegiances fall when pitted head to head? Vallejo or Crash Landed? Big Hugs or Imperial Pajamas?…

Round 2 pits two of the city’s fastest growing breweries against each other, as we see Logan Square/Avondale’s Rev take on up-and-comer Spiteful out of Northcenter/Bowmanville. Both are expanding, both have stellar award-winning ales, and both buck the trends while providing some of the freshest beer you can find in the city. So, what’ll ya have?

Winner
REVOLUTION, with 75%
of the vote!

Underdog v. Underdog. In Round 1, we saw Haymarket upset Goose Island in the battle for the Near West Side, as farther West Side’s Off Color took down city stalwart, Metropolitan. Will old-world-style prevail against Chicago-history-inspired? Hermosa versus West Loop.

Lastly, we’ve got maybe the most interesting matchup. Cult-favorite Pipeworks (our pseudo-South-Siders for sake of this bracket) takes on true South Siders in Beverly’s Horse Thief Hollow. Pipeworks might be putting more and more cans on shelves across town and getting buzz outside of Illinois, but don’t sleep on Horse Thief Hollow. Already a giant-slayer, brewpub HTH took down Lagunitas already. Plus, only one of these two breweries can count a GABF medal, and it might surprise ya who…

Winner
HORSE THIEF HOLLOW, with 62%
of the vote! 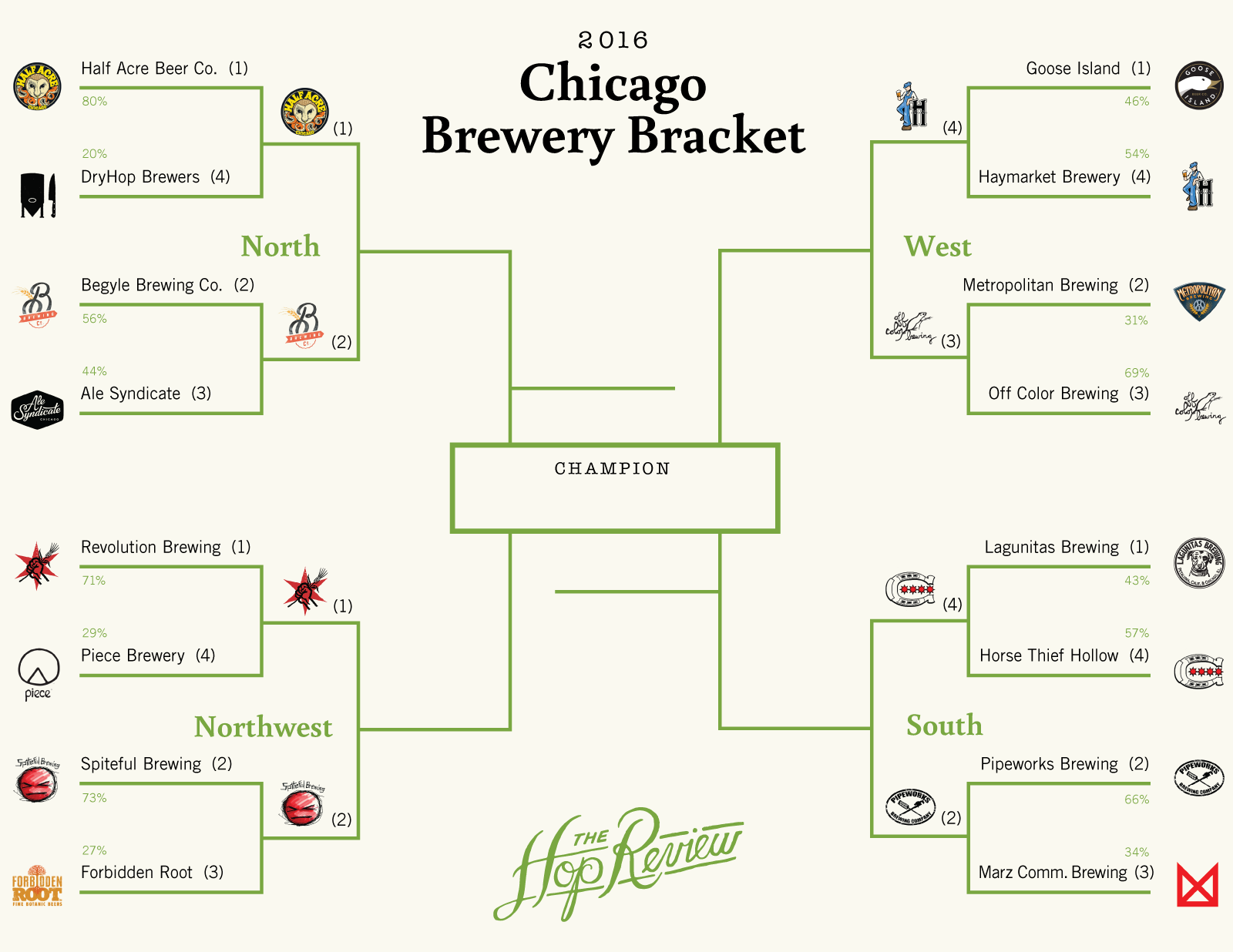 Best of luck to the remaining 8 breweries. It’s hard to pick a favorite Chicago brewer as we all now, but hey, here’s your chance. Stay tuned as we will tally the votes in order to select the Final 4.