Round 2 is now in the books, and we’ve settled on our “Final 4,” after another 6,439 votes among the previous 8 breweries. One side of the bracket went chalk, as two (1) seeds advanced handedly in the North and Northwest – Half Acre and Revolution, respectively. The other half of the bracket saw the surprising (4) advance (as the lone brewpub remaining, in South-Sider Horse Thief Hollow), and (3) seed Off Color just barely emerge from the West.

Click HERE, for a full breakdown and results of Round 2 matchups.

We’re looking to determine the final pairing, in Round 3. So, vote for your favorite remaining four Chicago breweries, below, and we will tally the votes to determine the last two for the Championship Round. Voting for Round 3 concludes Wednesday, 3/30 at 7pm.

Two titans of Chicago brewing. After finding little competition from their opponents in the first two rounds, Northcenter’s (and Bowmanville’s) Half Acre Beer Co. now faces off with Logan Square’s (and Avondale’s) Revolution Brewing. Both of these popular brewers built their brand on flagship IPAs – with Daisy Cutter and Anti-Hero. What happens when an unstoppable force meets an immovable object?…

Winner
REVOLUTION
with 69% of the vote!

The two darkhorses of the competition emerge from the other side of the bracket to battle it out. A true West-Sider–Hermosa’s Off Color Brewing–tests their fanbase, by taking on cult-following-backed and true South-Sider, Beverly’s Horse Thief Hollow. OC won a close won to reach the “Final 4,” garnering 51% of the votes, while HTH continued its unexpected march, behind it’s loyal following. A battle of traditionalists, here–do you prefer a honey-laden German altbier (OC’s Scurry), or a friendly lemony German Kölsch (HTH’s 18th Rebellion)?

Winner
HORSE THIEF HOLLOW
with 83% of the vote! 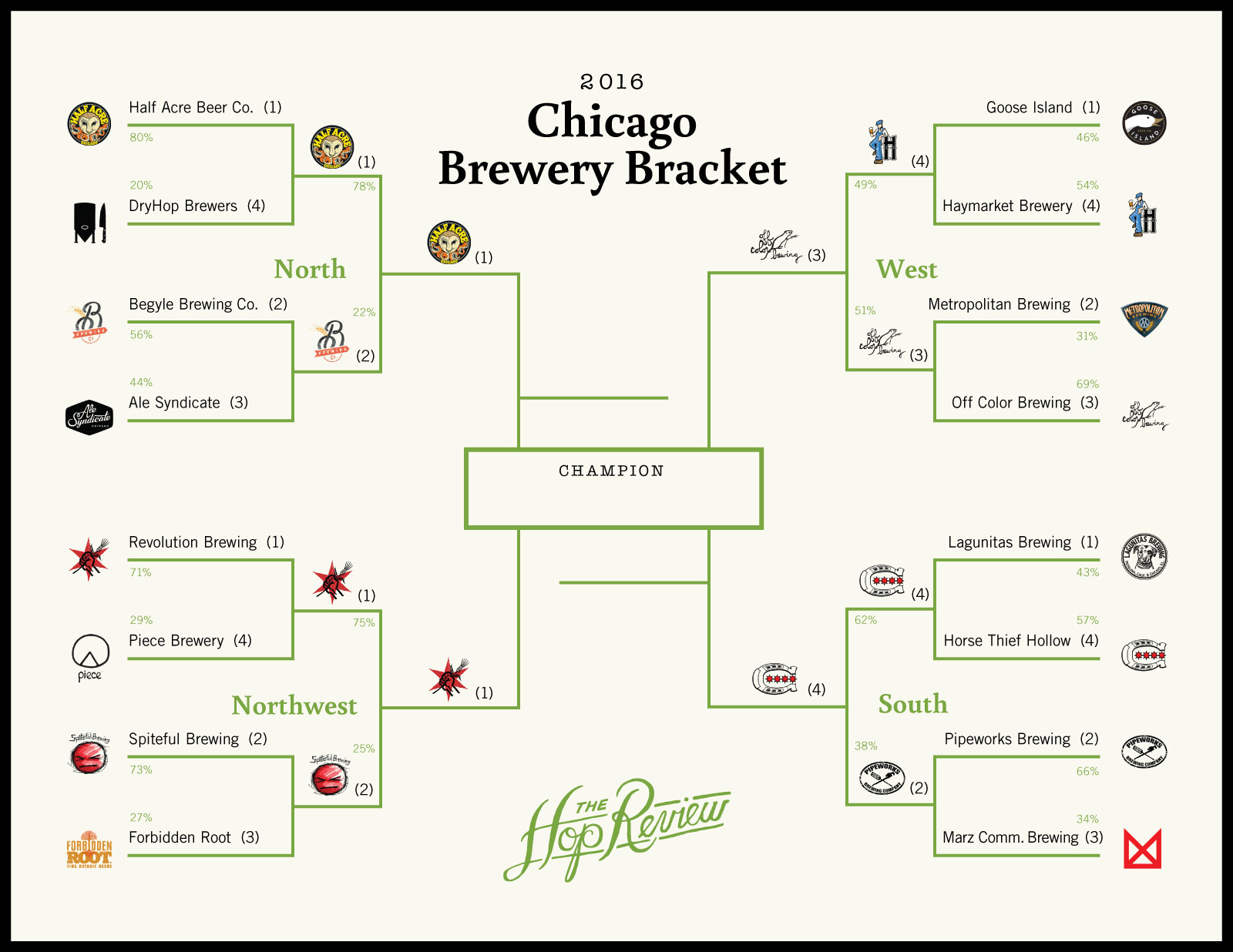 Best of luck to the Final 4. It’s hard to pick a favorite Chicago brewery as we all now, but hey, here’s your chance. Stay tuned as we will tally the votes in order to select the championship round.