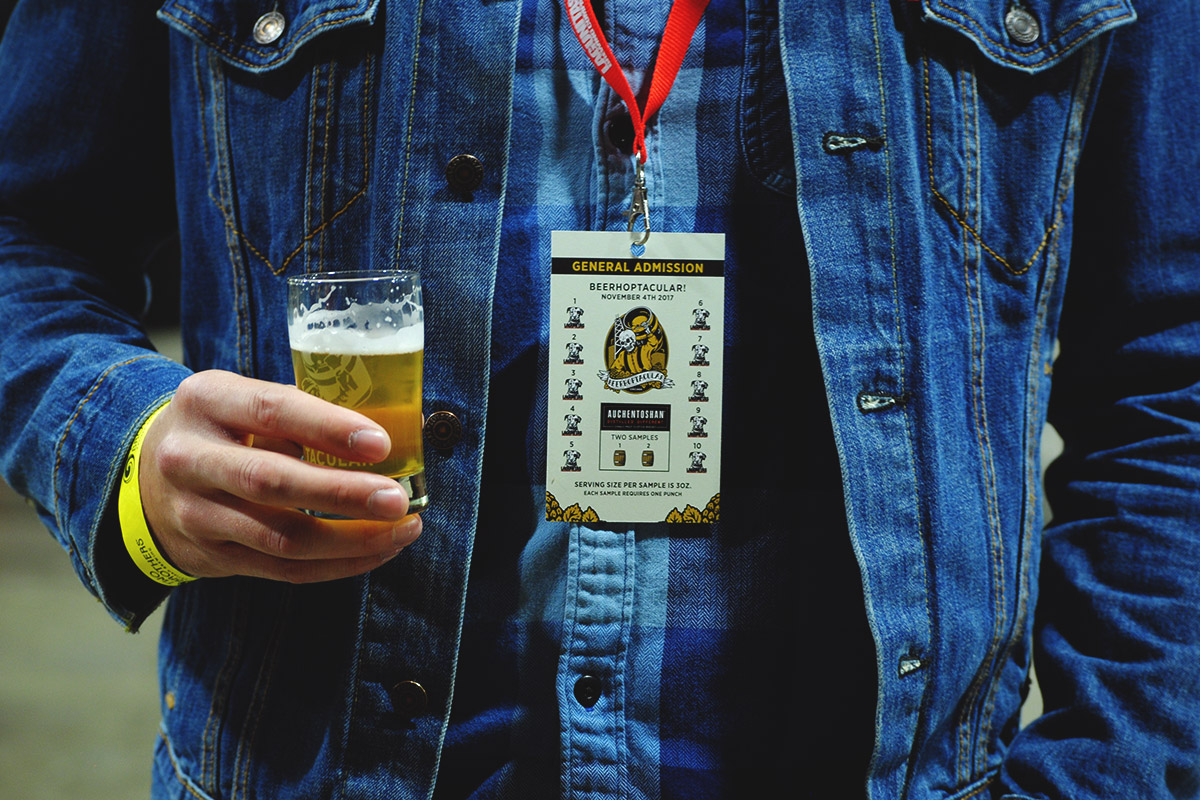 A Saturday afternoon trip to the Southwest Side’s Douglas Park usually leads us to beers at Lagunitas. This past weekend’s visit to the neighborhood led us to ‘Chicago’s Original Beer Fest’, the 7th Annual BeerHoptacular, back for a second year at the cavernous Cinespace Chicago Film Studios. By now, you likely know the film studio campus as filming location for any show with the word “Chicago” in it (Chicago PD/Med/Fire). But on this particular–and drizzly–Saturday, the massive space played host to the more than 75 breweries and several thousand fans there to drink their 150+ beer offerings.

This year, BeerHoptacular expanded on the slightly more crowded single-studio/room setting, and pushed it across two large rooms, plus the corridor space in between. And while we (like many fellow attendees) were unaware of the second room until a little later in the session, it acted as a pleasant surprise once we ventured over. And keeping to its approach of years’ past, the vast majority of breweries in attendance at BH hailed from the Chicagoland area (for the most part, leaving the out-of-town Ballast Points, Dogfish Heads and the like off the menu). And to accompany the usual brewery booths, 2017 also saw an Auchentoshan Whisky pairing, an alarming amount of Monster Energy Drink, the oddly intriguing improv-focused ‘Insult Booth‘, beer-focused art vendors, a Chicago Brewseum partnership, and plenty of tacos and pizza.

Alas, we were mostly here for the beer…

With more beer available than anyone could possibly hope to drink, we chose 10 beers from BeerHoptacular that we felt represented the best of the local beer on offer. The diversity of styles throughout our picks prove the incredible depth the Chicago scene has developed. Here are our top 10 beers from the festival, listed in alphabetical order.

Aleman is a tiny brewery on the city’s northwest side that has intrigued us since we first crossed paths with them (likely at another festival), years ago. Their distinct hand carved ‘Ale Man’ tap handles and jockey box sculptures are enough to intrigue alone. And their beer is, simply put, solid. And their Hitman Double IPA was no different. It’s dank with a berry-citrus profile (thanks, Mosaic). And while it drinks a little on the juicy/smoother side–in part thanks to the addition Lupulin powder–it rests on a sweet malt backbone, like a DIPA should.

As Dan Schedler, founder of ATB, put it, ‘This is a Christmas beer to contradict all the other Christmas beers.’ And while Around the Bend’s choice for a holiday ale may not be the allspice concoction you most often associate with the once-a-year style, it is still a perfect pairing for the season. In fact, this Belgian Tripel brewed with cranberries and almonds might be a better match for your Thanksgiving or Christmas meal. Toss the densely fruit-forward ale alongside the turkey and stuffing, and you’re good to go…

Few beers turned heads at BeerHoptacular quite like the Indian Pale Ale from the Michelin-starred brewpub on the North Side. And that should come as little surprise to anyone who has ever sampled a flight offering from their menu. The pale ale is crafted with cardamom, coriander, cloves, star anise, roasted grapes and keffir lime leaves–practically making for an Indian cuisine sampler platter in a glass. The result of brewer Michael Carroll‘s recipe is an incredibly interesting layer of flavors. They’re not kidding when they say, ‘This isn’t your typical IPA.’

Another pale ale from Brickstone, and another clear winner from the Bourbonnais, Illinois brewery. Hop Screamer also offers us another IPA highlighting the very of-the-moment Mosiac hop choice. While Mosiac has been around since 2012, the varietal seems to be having a moment–and we’re glad to see that be the case. No example of its berry-meets-tropical-citrus character may be more apparent than in this IPA, either. Hop Screamer is juicy…really juicy. ‘Hop juice’, let’s call it. And at only 6.5%, it’s more balanced than a lot of the other juicy ales on the market right now.

This is another perplexing one from Lagunitas. With the Petaluma/Chicago behemoth acting as the main sponsor (and next door neighbors), we knew the brewery would have a large presence at BeerHoptacular, as they did in 2016. However, upon approaching their booth, the lineup was rather underwhelming. There was Eroica, one we were high on in October, but aside from that only this Brett Fusion 2000 piqued interest. No details of the style were listed, nor can this particular version of Fusion 2000 can be found online. So, we’re left with what we gathered is a ‘Scotch Ale’…with Brettanomyces. Despite the confusion, this was a pleasant surprise. After being warned by the gentleman pouring, I was handed a ‘boozey and funky’ ale. And it was a maltier version than your typical Brett beer, with that distinct earthiness you might expect. A contradicting profile, but interesting nonetheless.

We’d be lying if we said we weren’t partial to this Chicago brewery out of Bridgeport. They’re just the kind of ‘always-intriguing’ makers of beer that we can’t help but keep an eye out for at any festival. And, while like Lagunitas, they might not have brought the heavy hitters to BeerHoptacular, their pale ales are always a welcome addition. Such is the case for Splash, their dry-hopped APA. While no fruit is added to this pale, it’s fermented with a custom yeast blend that ‘creates tropical and citrus fruit flavors and aromas that compliment the complex fruity hops in this beer.’  It’s become a Hop Review staple. And now, it’s available in cans. Oh, and their Double Splash DIPA is doubley fantastic, too.

This brewery from the far northern Chicagoland has made a name for itself, concocting unexpected beer profiles (whether it’s one filtered through a Randall, or it’s a popcorn cream ale…) This salted caramel Scotch Ale is yet another intriguing beer from their lineup, and apparently is a collaboration with the band Deerhunter. The Scotch Ale is such a perfect base beer to carry some salted caramel–it makes you wonder why you haven’t had such a pairing before, potentially. It’s a chewy, sticky, boozer with a hint of roastiness and chocolate on the backend. We’ll welcome this dessert beer in the coming endless winter nights.

Next to Band of Bohemia’s Indian Pale Ale, this was certainly the other most surprising beer of the fest. For someone who despises mushrooms, I often gather little excitement for a beer that bares the earthy fungus in its recipe. However, had I drank this without knowing there were ‘shrooms involved, I would have thought the sweet, syrupy flavor came from solely from maple. The Candy Cap mushroom is what gives it the deceiving maple syrup characteristics, both in aroma and with it’s obviously sweet taste. This light-drinking brown ale drinks as the most fall beer you could imagine, at only 5.7%. It was such a pleasant surprise, as our last taste at the fest, that we were wondering how it took us the whole day to come across it.

Pipeworks has an obsession with battling various entities against unicorns, and this time the mythical horse appears to have zero chance. Reaper Vs. Unicorn is a rye-forward barleywine, weighing in at a hefty 10.0% ABV, enough to send a unicorn running. The rye spice is present on the nose, and it drinks with distinct notes brown sugar and molasses, all capped off with a tinge of hop bitterness to balance it out. The sugar sweetness is combined with a slightly dense scotchy-ness, making for a chewy, boozey sipper.

With all of the bad juju associated with the brewing space at 2925 W. Montrose in Chicago (formerly Breakroom, then Finch’s), we had to temper our excitement when we heard the third attempt at a brewery was set to move in with Ravinia. That, plus the talk was that the brewery would concurrently be opening a brewpub in its native Highland Park, Illinois. All of those worries were laid to rest once we sampled the beers from the beautifully illustrated cans at BeerHoptacular–particularly this Steep Ravine IPA. The Chinook hops provide a spicy piny-ness, which mellowed slightly by the addition of oatmeal flakes–all together making for a pleasantly creamy and balanced IPA. A really tasty ‘throwback’ IPA, in a sea of citrusy, juicier versions.

Others also worth your attention: 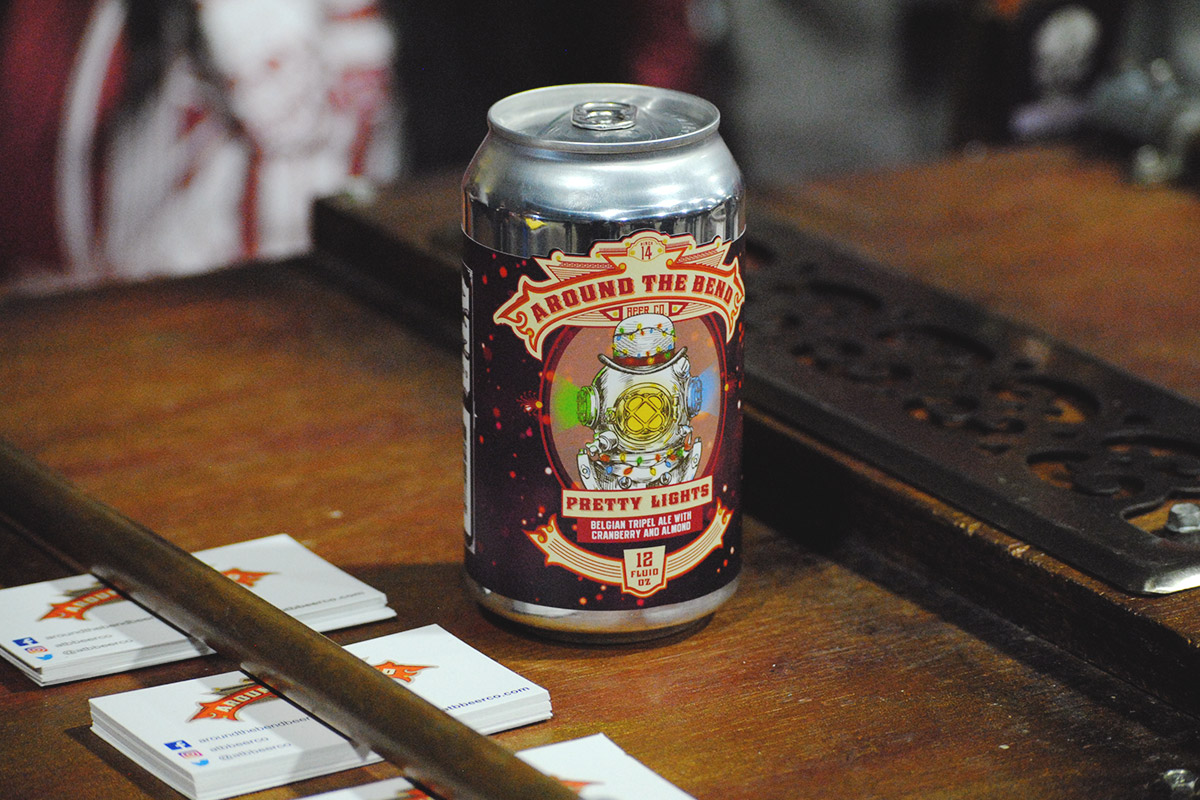 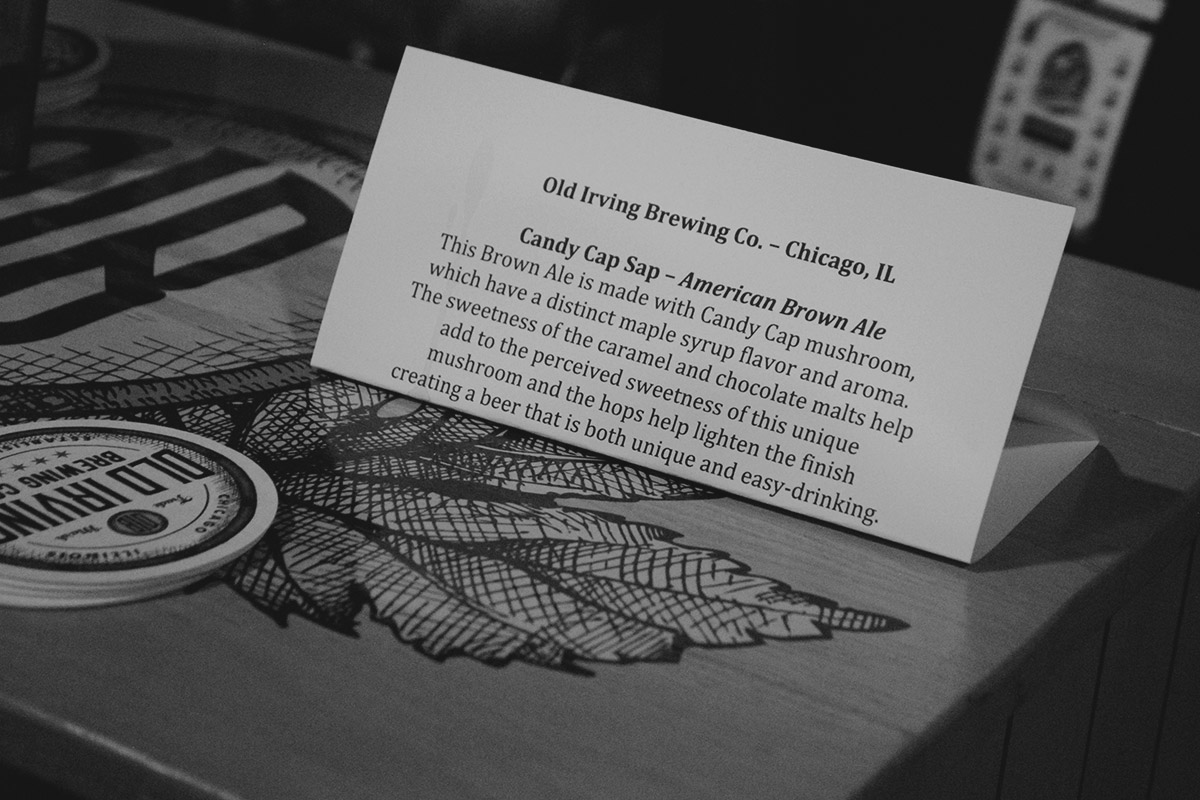 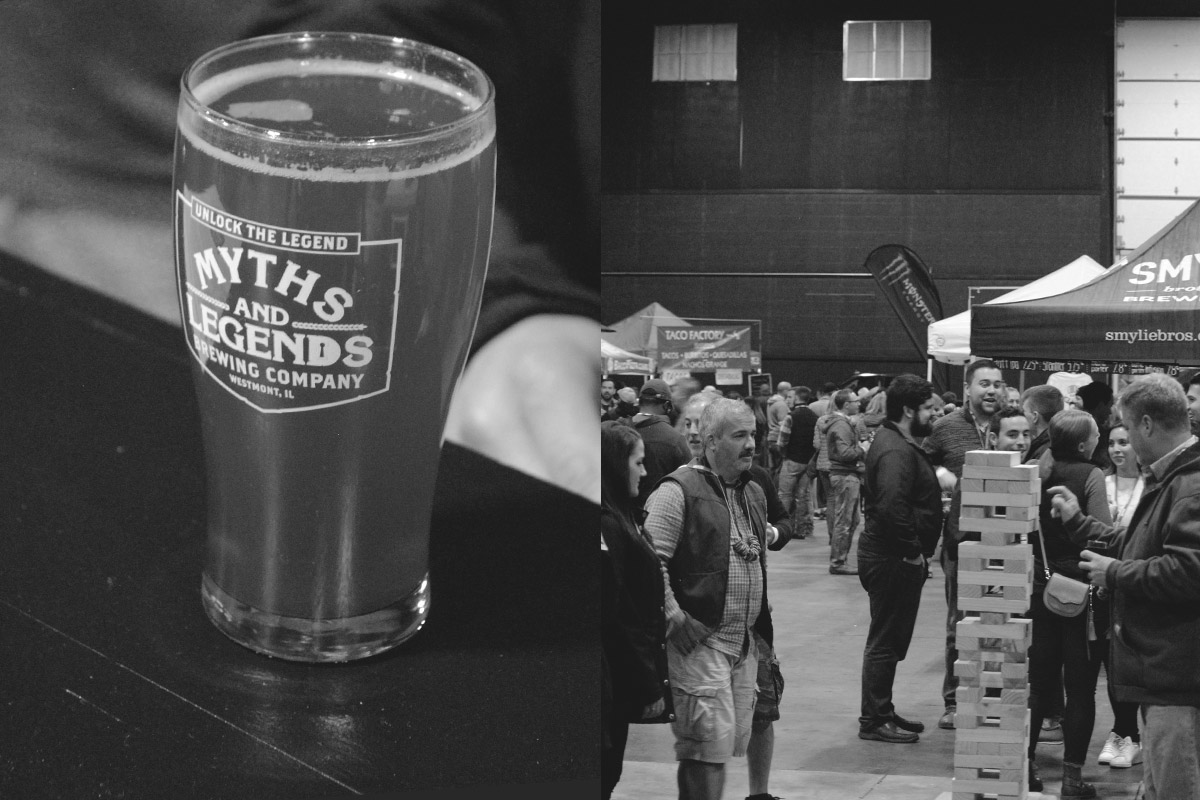 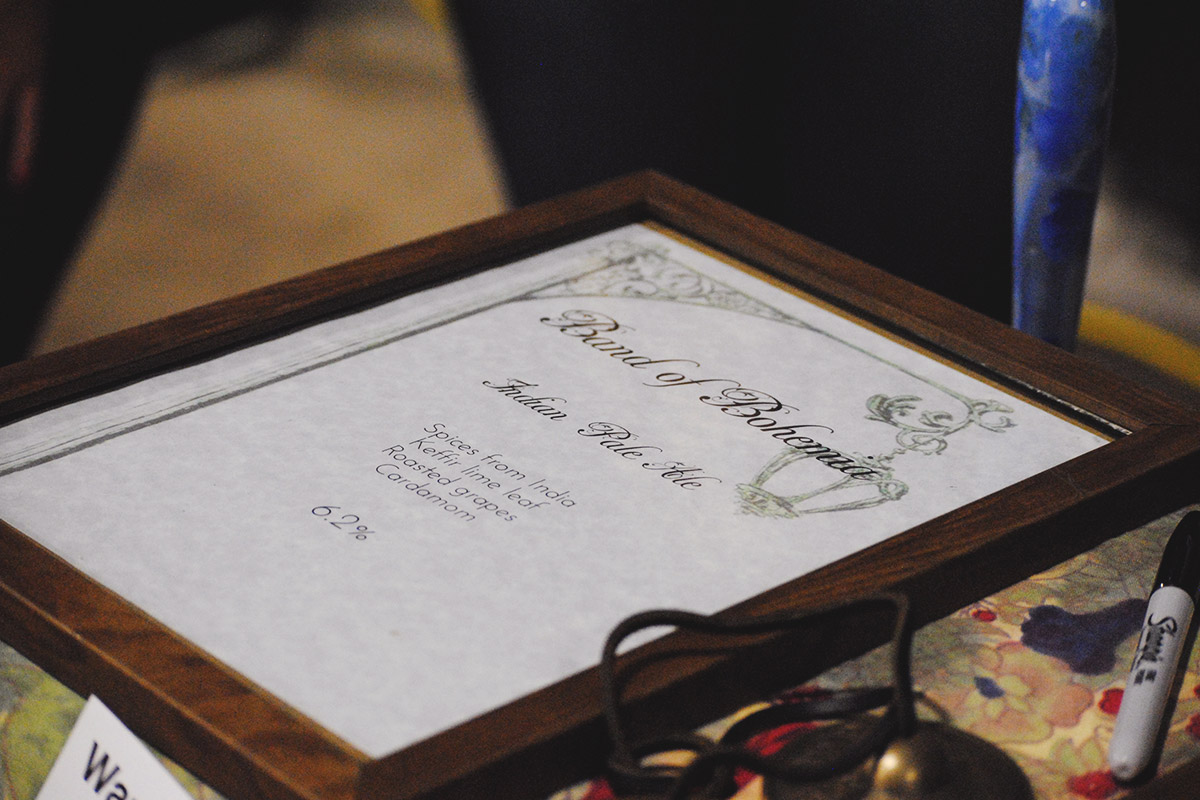 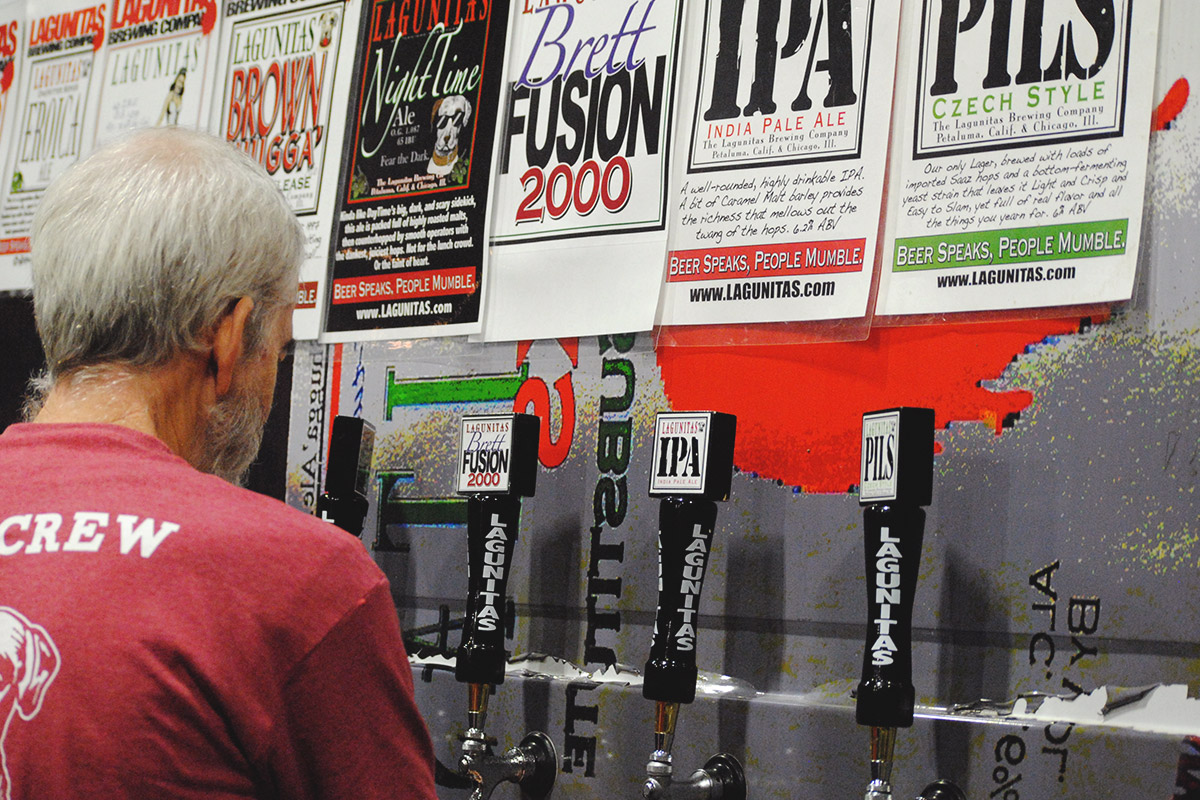 The 7th Annual BeerHoptacular was produced by Lou Dog Events.