Off-Flavors in Beer: What They Are and How to Identify Them From producing wort to fermenting, to packaging and serving, there’s plenty of room for error when making beer. But what’s the difference between a beer you personally don’t like and a beer that has an off-flavor?

Each of our palates is influenced by our personal experiences, memories, and cultures. So while some folks can’t stand a sour and salty gose, it doesn’t mean the beer has a flaw. It might just be that person’s palate isn’t extended or likened to those flavors. On the other hand, the flavor of creamed corn in your saison is an issue to be aware of.

The major off-flavors we experience as beer drinkers come from two major areas: During the brewing process (and most likely a derivative of yeast health) and during packaging and handling.

The best practice is to use this as a guide. But remember, our senses are subjective. Instead of desperately trying to find green apple in a beer (which would indicate acetaldehyde), you may find that to you, that off-flavor smells more like latex paint and tastes like underripe avocado.

Everyone has varying levels of sensitivity to different off-flavors. Once you find your own indicating points to a specific off-flavor, it’ll become a reference for future evaluation. Luckily for us, the best way to identify off-flavors and improve our palates is to drink more beer. And while you’re at it, grab a few of our favorite beer tools and take your beer education to the next level.

The Brewing Cloud: A Book of Short Stories Buy Now: $10

Brewing- and Yeast-Based Off Flavors

Flavor & Aroma Indicators: Butter, buttered popcorn, a slick mouthfeel.
How it Happens: During amino acid synthesis, the chemical that produces diacetyl leaks out of the yeast cells. The beer needs time to rest so the yeast can reabsorb diacetyl, thus ridding the movie theater popcorn flavor.

Spencer White, the Quality Control Manager at Aslan Brewing Company in Bellingham, Washington, explains, “This diacetyl absorption period is what’s known as the ‘diacetyl rest’ that you will commonly hear amongst brewers. A common mistake is to rush through the diacetyl rest period which results in a buttery slick beer.”

In higher amounts, the presence of diacetyl may be a sign of a stressed yeast, or even draft line contamination.

“There are a few ways brewers can test beer for diacetyl ranging from simple and cheap to laboratory level testing,” White continues. “This can be as simple as heating a sample of beer in an airtight jar and smelling for butter, to hiring laboratory personnel to run samples through a gas chromatograph for an accurate concentration of the compound. At Aslan’s laboratory, we use the vicinal diketone (VDK) distillation-spectrophotometric method.”

Diacetyl can have such a strong butter flavor that it was once used as flavoring for microwave popcorn. That is, until it caused respiratory issues in people who worked with the chemical. Some folks are highly sensitive to diacetyl, whereas others have a hard time picking it up. You won’t know your sensitivity level until you’ve had a few diacetyl-ridden beers. Flavor & Aroma Indicators: Creamed corn, cabbage, vegetal, and stewed tomato in darker beers.
How it Happens: DMS develops at high temperatures (above 140°F) and is expelled easily while the wort (the beer before yeast is pitched) still boils. The precursor to the off-flavor is s-menthyl methionine (SMM), and comes from the grain during the boil.

“It presents as a sulfery-corn or ketchup aroma and is common in beers that utilize raw grains or lighter roast malts like pilsners and saisons,” says Rick Dankert, brewer at Georgetown Brewing in Seattle, Washington. “The best advice I can give is to use the freshest grain possible. If it’s a year old, throw it out. And make sure you get a vigorous boil for at least fifteen minutes”

As soon as the temperature drops, DMS builds. If you want to avoid that creamed corn flavor, you need to chill your wort immediately after the boil. If DMS is in a beer, it’s an indication of brewhouse problems or may even be a bacterial infection. Much like diacetyl, DMS is one of those chemicals that varies in sensitivity from person to person. Your indicator may not be creamed corn, but more like tomato stew or compost.

Bottom Line: Any vegetal flavor is an indication of poor yeast health.

For the most part, acetaldehyde is consumed by the yeast and converted into ethanol (alcohol). But if the beer is put out too young, acetaldehyde might be prevalent. Ever hear anyone describe a beer as “green?” That typically means the brewer rushed the process. Unwanted oxygen in packaging can also be a cause of the green flavors.

Flavor & Aroma Indicators: At low levels has a pleasant, fruity aroma. At higher levels, it comes off as nail polish remover. Sometimes it isn’t even an aroma, but a nostril-hair-burning or eye-watering sensation.

How it Happens: Ester and solvent off-flavors form when beer ferments at too high of a temperature. Yeast is very sensitive and any neglect or lack of monitoring can stress it out. Even a slight adjustment in temperature can change how effective the yeast is at fermenting.

Esters, commonly present in Belgian ales, tend to have flavors and aromas of pear, banana, or even perfumey floral notes. In some styles, like hefeweizen, this can actually be a good thing. But when the fermentation gets too hot or the yeast health is questionable, esters can turn into solvent flavors.

Solvent issues are most common in beers higher than 10 percent ABV, because the yeast has to work especially hard to eat the sugars. You’ll find the characteristic fruity esters in big Belgian beers like Dubbels and Tripels. At higher ethyl acetate levels, when the aroma is solvent, ethyl acetate is not appropriate or to-style. But you are more likely to run into this issue with wood-aged beers, like a Flanders Red.

Bottom Line: While essential in some styles, ethyl acetate becomes an off-flavor in larger quantities.

Handling- and Storage-Based Off Flavors How it Happens: When wort/beer comes into contact with oxygen, it becomes oxidized. This most likely happens during — or as a result of — packaging. These days, most packaging lines purge cans and bottles with carbon dioxide to limit how much oxygen can make it into the beer.

“We track DO (dissolved oxygen) through each process,” says Dankert at Georgetown Brewing. “We take a reading of the FV (fermentation vessel), in the purged bright tank, during transfer, in the bright tank before packaging, and in the final package. The process is redundant but reliable… if DO goes over tolerance levels, we immediately shut down and troubleshoot.”

While trans-2 nonenal can be a positive characteristic in some bottle conditioned or aged beers, it’s usually considered an off-flavor.

Bottom Line: Oxygen is the enemy of beer! In most cases, the only time beer should have contact with oxygen is when the wort is being chilled and transferred to fermentation tanks. This stimulates the yeast to start eating sugar and producing ethanol (alcohol) and carbon dioxide (carbonation).

How it Happens: This off-flavor is a reaction between blue light and hop-bittering compounds called iso-alpha acids. Because of the “skunky” flavor it gives off, lightstruck beer is commonly known as “skunked beer.”

More often than not, beer gets skunked because of how it’s packaged. Clear glass bottles allow for 100 percent of UV rays to hit the beer, which causes the lightstruck flavor (hello, Corona). Green glass is also terrible at blocking UV rays (hi, Heineken).

Brown bottles are the only glass containers that offer blue light protection. However, even brown bottles allow some UV light to come through. Ever hear anyone say that cans are the best packaging? This is largely because aluminum cans are the most effective at blocking UV light.

Bottom Line: Because skunking happens in a matter of seconds, you’re most likely to experience it when drinking a pint in the sunshine. Stick to cans on the beach and pints at the bar. How it Happens: Infection happens when unwanted bacteria makes its way into beer. This can happen at any point in the brewing process, but you are most likely to encounter infection with draft beer.

It’s important to note that infection in one style of beer might be a desired trait in another. This is common with “wild” or barrel-fermented ales, when brewers use a non-commercial yeast (usually of the Brettanomyces variety) to produce funky, barnyard, or even sour, acetic-acid-like flavors and aromas.

“We are still developing the science side of our barrel program,” says White at Aslan. “Our best tools for that program are meticulous note-taking and a well-tuned sense of smell. The big difference between fermenting beer in steel tanks versus barrels is that each barrel has its own unique microbiome, whereas steel tanks are sterilized between every batch of beer. When fermenting and aging beer in a vessel that isn’t sterile, you get a bit of randomness. This is amplified when adding fruit or other additives that have wild yeast and bacteria.”

That being said, it’s usually pretty easy to tell when an “infection” is intentional or not. If a beer tastes wild and complex, it’s usually a sign of craftsmanship. If it tastes like dirty pond water, it’s probably an accident.

Bottom Line: Infection most likely comes from dirty draft lines, but can also be a sign of bacterial infection in an entire batch of beer.

In order to become a better beer drinker, you not only need to drink more beer, but to drink more beer mindfully. Understanding what is acceptable in certain styles will allow you to rank a bad beer against a good beer against a great beer. Returning a beer to the bar because you don’t like it or you’re not familiar with the style is far different than returning a beer that is afflicted with DMS or poured off a dirty draft line.

Because of its variety and complexity, beer is the most consumed alcoholic beverage in the world. While this may lead to some common issues, it also gives beer drinkers an opportunity to continue learning — while drinking, of course. 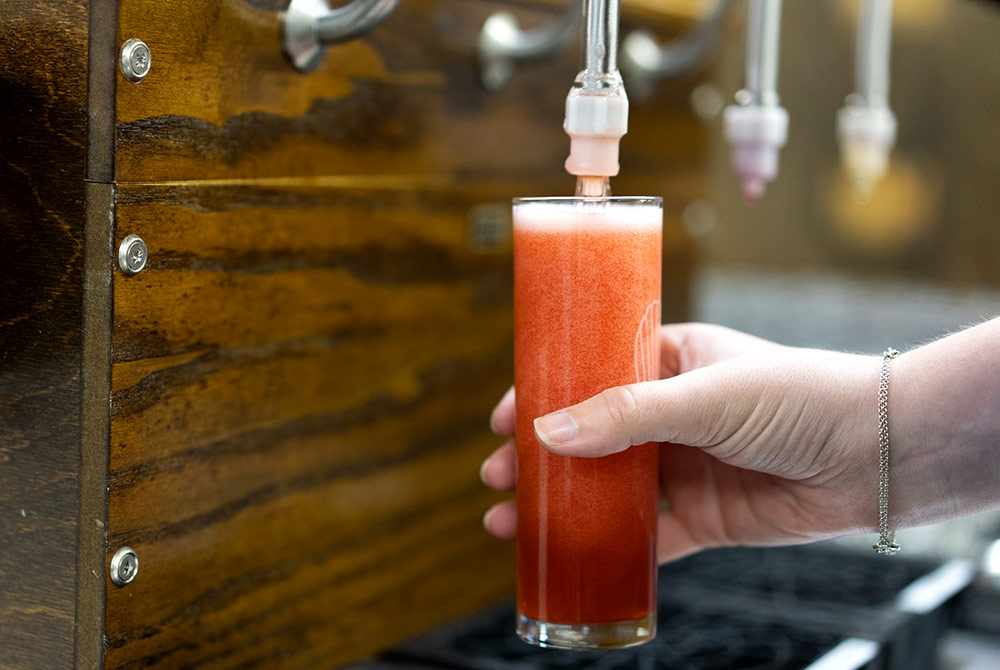