The History of the World’s Most Iconic Beer Glass 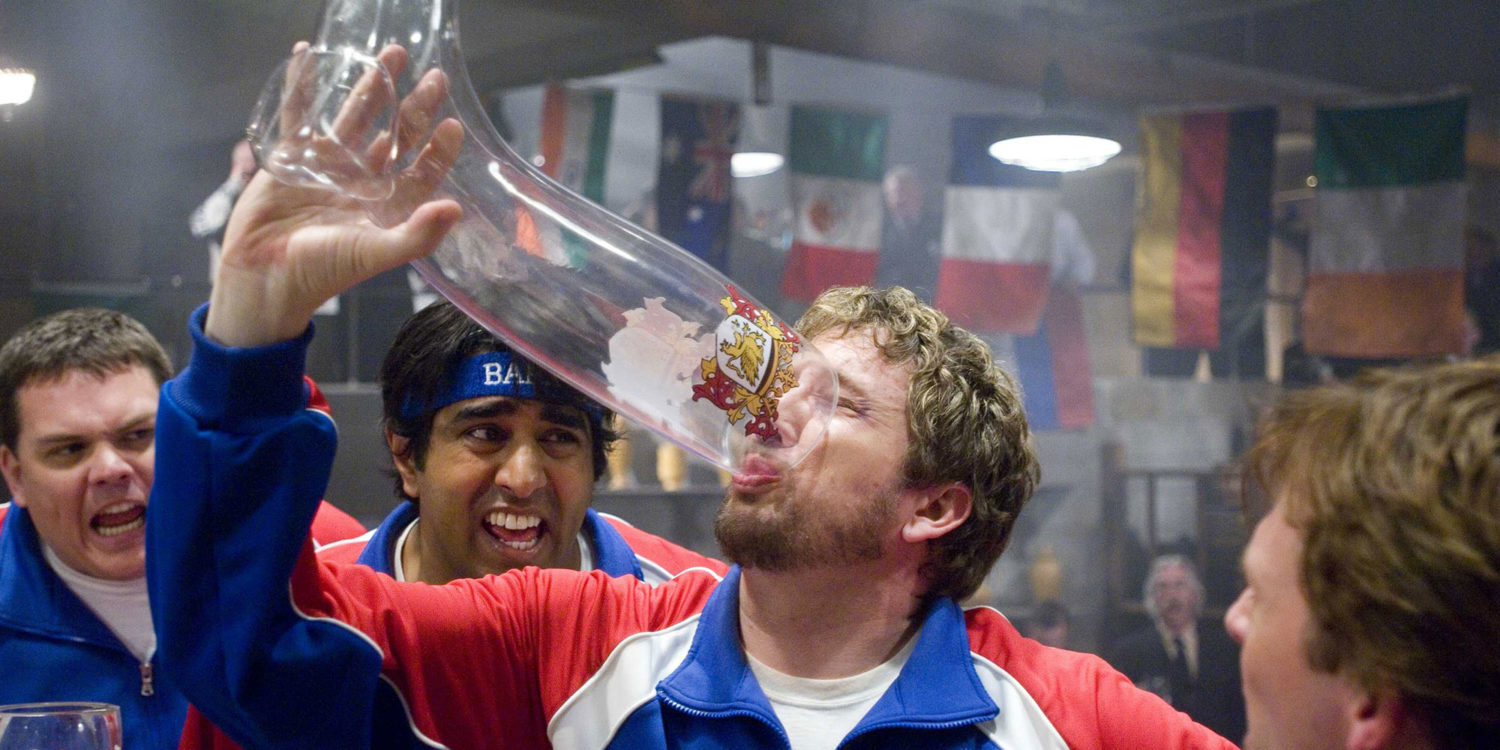 Image taken from the 2006 movie "Beerfest" Munich. September 25, 2010. I made my way from my forest campsite on the fringes of Munich to the campgrounds in the heart of the city, completing the final step of my pilgrimage to the 200th anniversary of Oktoberfest. As a 20-year-old (and therefore unable to drink in my home country) Germanophile, and a lover of German-style beer, this was my dream. Weaving through mobs of lederhosen clad lads and ladies, I made my way into one of the bierhalls: Hofbräu, if memory serves (it was fuzzy the next day, let alone six years later). I ordered my first beer, a one-liter monster. A moment later, a burly bier maiden—carrying no less than eight of these ginormous steins—balleted through the crowd, slammed a glass down in front of me, took payment, and, with shocking grace, vanished again into the crowd. I took my first slog of many to come: “Ahhhh, now that’s a beer.”

I was in heaven. But as I took it all in, there was one thing missing: Where were the iconic German bierstiefel (beer boots) I had come to know and love? The ones from such historically accurate and culturally relevant investigations of German culture as Beerfest and “Around the World” frat parties? Where were the cheers of “Das Boot! Das Boot!?”

So I got to wondering: Is the boot an authentic element of Germany’s drinking heritage, or a poetic interpretation to popularize the depiction for an American audience more obsessed with cultural clichés than cultural histories? I returned to my beer and promptly forgot all about the shape of the glass in which it was served. But with another Oktoberfest—expected to draw approximately 7.2 million visitors this year—on the horizon, I’m again curious: Where did the notion of the bierstiefel come from?

There are several divergent origin stories for the bierstiefel, but the two most common oral histories trace their roots back to the battlefield.

One states that, in an effort to motivate his troops in the face of a particularly trying day on the battlefield, a German general wagered to drink out of his boot should his forces win that day (a tradition rugby players are all too familiar with). Needless to say, the unit was victorious. But there the history already begins to split, with some recollections saying he completed the wager and thus inspired the glassware, and others claiming he had a glass boot fashioned as a way to keep his word and avoid a nasty pour. The other dominant story proposes that some German divisions—or even some more antiquated militaries—would haze soldiers, as a rite of passage, by having them drink from their marched-in boots.

I can’t say for sure if any of these is the true story, but as a student of history, I like to look for evidence. And as it turns out, the hard evidence we have paints a rather different story—though one that wouldn’t necessarily contradict a story arc that begins with drinking from an actual boot. The earliest physical evidence of a glass beer boot actually comes from England (sorry Germany) sometime during the early nineteenth century. These were of a slightly different style from what we think of today. They were much smaller and featured a riding strap blown onto the glass around the ankle of the boot, nodding to their association with riding and hunting clubs. But the beer boot did not last as a feature of English culture, losing favor about a half-century later.

It is unclear if the British inspired the Germans, but in the mid-1800s, the bierstiefel we know today came to prominence. The Germans upped the size (to one-liter-plus) and ditched the riding strap. By machine pressing the glass, they were also able to scale up production and make the boot a part of popular culture rather than a limited, specialty item. The military origin resurfaces with WWI, where German generals indeed wagered drinking from a bierstiefel post-battle. As a result, the boot size only grew larger. By this time, “Das Boot” was a part of German military culture and by WWII, American soldiers were collecting and repatriating them as war bounty. And so the bierstiefel started its globalization, temporarily peaking in the 1950s with Japanese ceramic counterparts and American cowboy boot spinoffs.

But much as Western movies went out of fashion in the early 1960s, so too did the cowboy beer boot, and with it the globalization of the shoe-shaped drinking glass. As the fad faded, the bierstiefel remained popular chiefly in Germany and among collectors abroad. And so it remained for nearly 50 years, until the 2006 film Beerfest reintroduced the beer boot, creating an image of Germans as boot-guzzling beer maniacs. This kicked off the re-popularization of the bierstiefel, delivering to the world a new form of competitive drinking and, in truth, promoting drinking in a decidedly un-German manner. There’s no doubt that speed drinking from a boot can be fun, but it doesn’t fit with a culture that loves and appreciates beer enough to host a two-week festival honoring the joys of producing and drinking beer. As I think back on my time in Munich, it’s no surprise I quickly forgot the absence of the boot: Oktoberfest already has a wealth of traditions all its own.

Currently Drinking: Single Barrel Scotch
Charlie is just a guy who likes tasty versions of simple things. Give him some water, grain, yeast, time, and (ideally) a barrel, and he'll be a happy man. Coming from a cool European family, his formal introduction to beer was with his grandparents at 15 in Germany. From there, a beautiful relationship was born, founded on a respect for quality. Through his college years, he always kept a private beer fridge as respite from the Natty. Now, having made the Oktoberfest pilgrimage twice and having lived in NYC and SF, he's broadened his beer tastes, enjoying everything from the traditional to the experimental. These days, he finds himself most often diving into his vast whiskey collection, but he does have a standing beer night with the boys every couple of weeks.
theamateuralcoholist