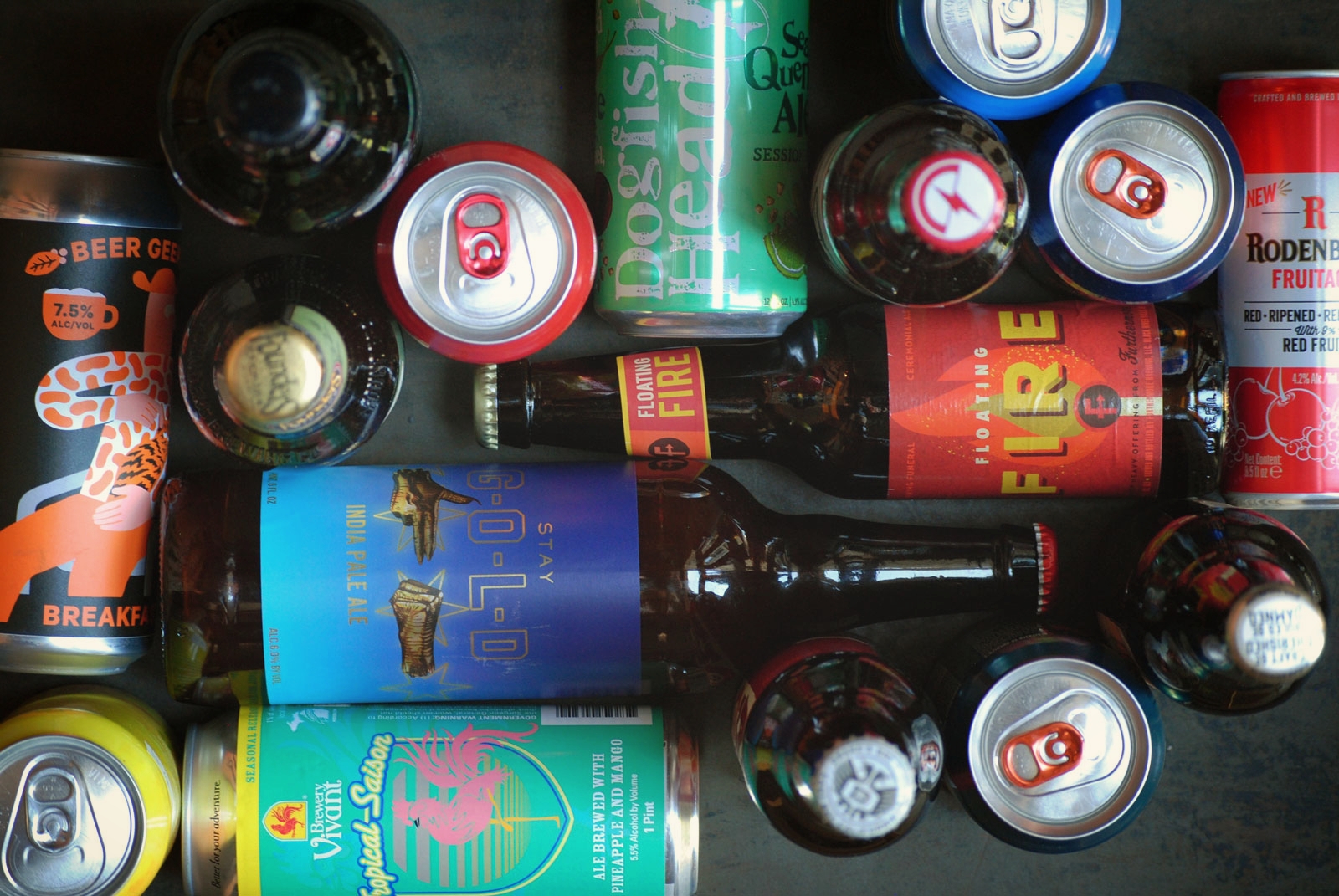 We’ve tasted through the following 16 beers for August, and rated them according to our very own interpretation of the BJCP scoring guidelines, on a scale of 100 and listed in alphabetical order. This month, fruits and vegetables are highlighted ingredients, sessionable sours get a look, smokiness plays a key role, and even malt liquor and…popcorn are remixed. We considered aroma, appearance, flavor, mouthfeel, overall impression and trueness to style. It’s not an exact science–we know this. We just don’t like to pass on the opportunity to drink…more beer. Cheers! 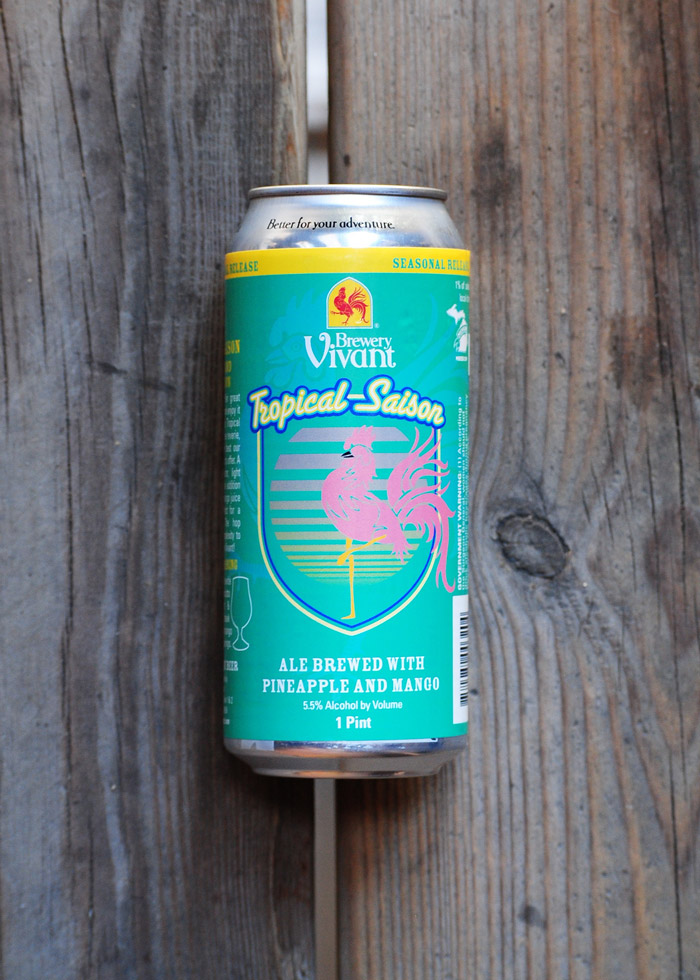 This was my second time coming back to this beer, I think because I really want to like it. While it pours a perfect golden straw color, that’s about where the to-style characteristics end for me. The pineapple is in no way hiding in this beer, it is front and center, but cloyingly so. While you might lean for a saison typically for that dry, funky profile–this simply is not that. Tropical and somewhat refreshing, yes. But overall this beer was far too sugary sweet. 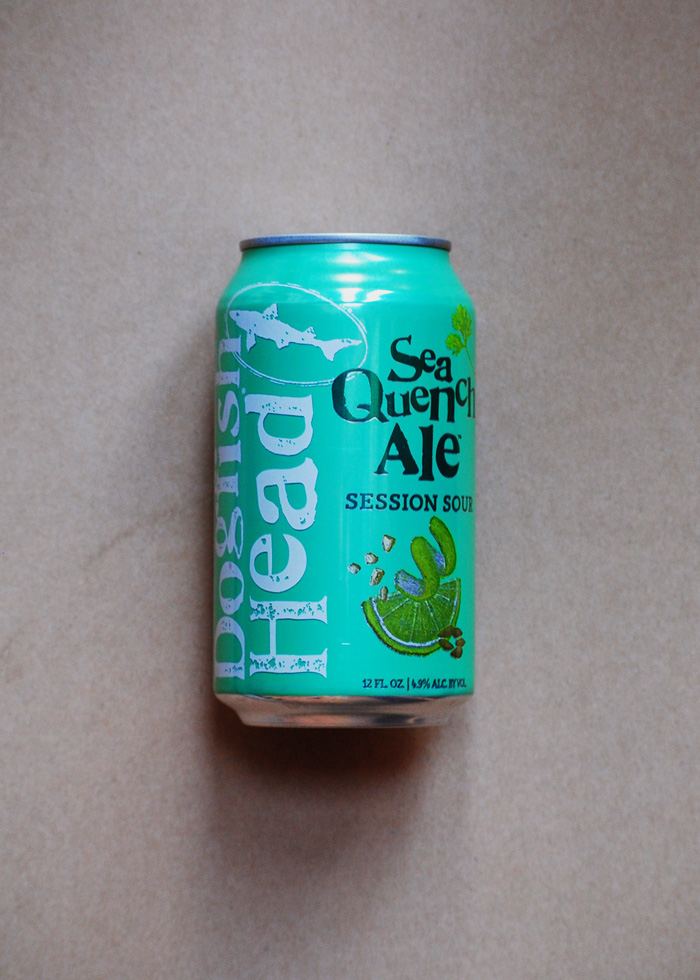 If there was ever a beer meant to sway margarita fans towards a canned variety, this session sour from Dogfish Head might be it. It’s said that this summer sipper is a combination of three traditional German styles: a kölsch with lots of wheat, a salty gose with black limes and sea salt, and a citrusy-tart Berlinerweiss made with lime. The blend of these makes for a distinctly tart session ale that reminds us of salt and lime around the rim… 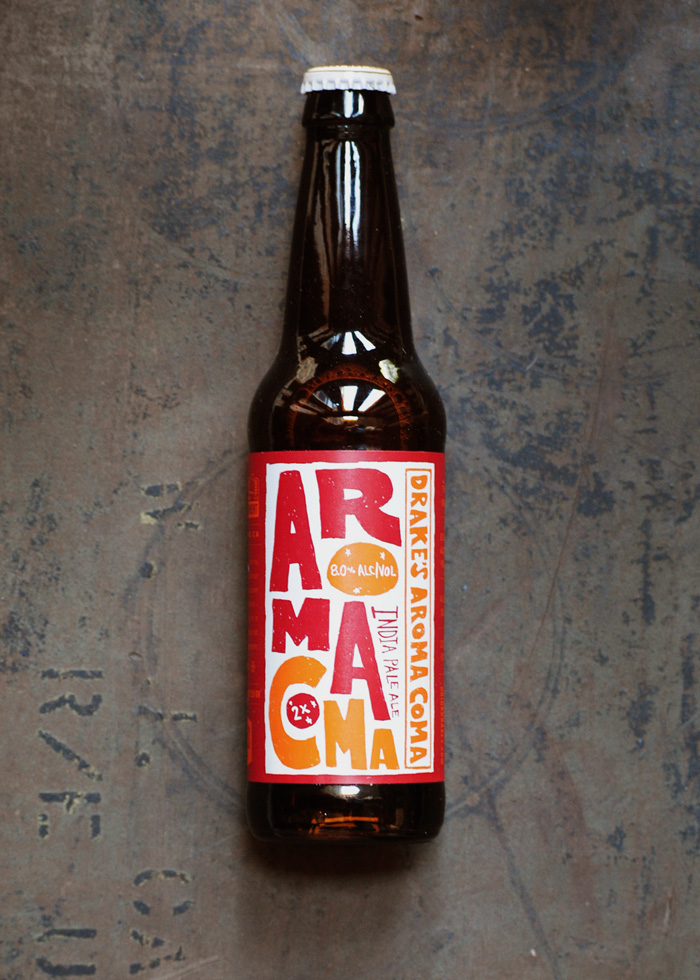 They’re calling this just an IPA? A deep caramel color, huge dank hoppy nose, and a resinous pine palate overload await you in this appropriately named beer. If big hops and a bready, toasty sweet malt backbone are what you like in your IPAs, then this one is for you. Perhaps they would have been better off calling this one a double or imperial because while we enjoyed our taste, we can’t imagine drinking more than one. 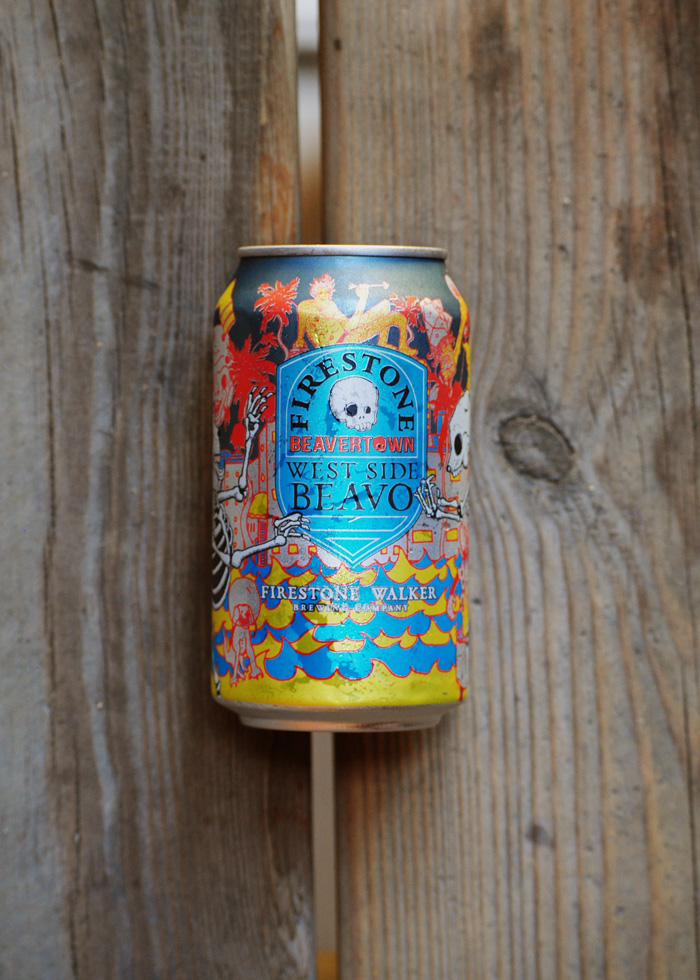 In the UK, Beavertown is widely known as the brewery that just keeps growing. And they’ve managed to do so with some really fun and quirky collaborations along the way. This one with Firestone Walker, an IPL, is no different. While not a terribly exciting style, this is still a solid beer. It’s a nod to FW’s classic Pivo Pils, utilizing a mix of Pacific NW and UK hops. It’s a crisp lager with just the right amount of bite. 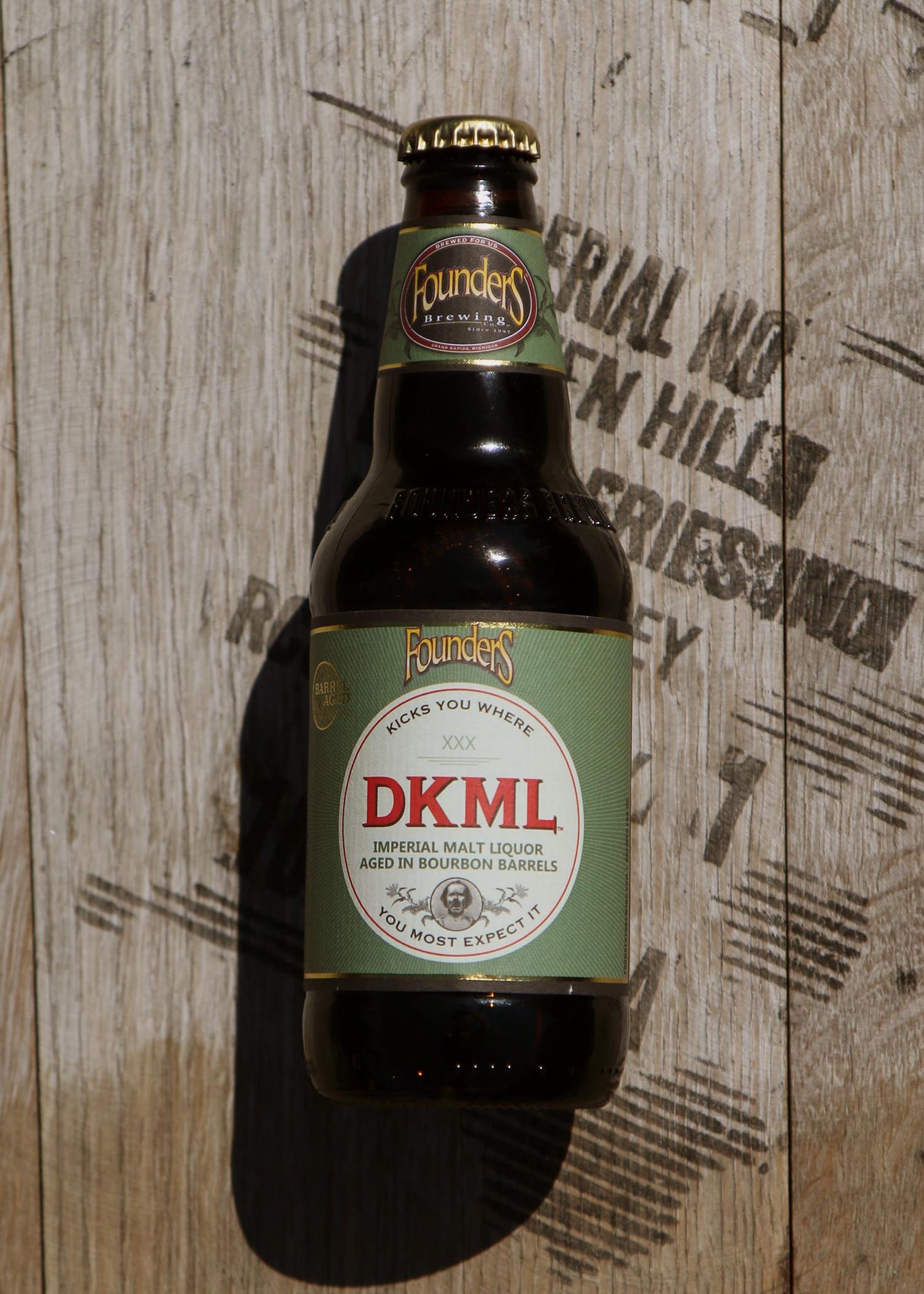 As much love and admiration as I have for the Founders, I was skeptical when I read they were going to be barrel-aging a malt liquor. I will never doubt them again. While a little sharp on the nose—it is 14.2% ABV after all—DKML is sweet, but not syrupy, with hints of corn. The barrel is the real star, making the beer incredibly smooth with just enough hop bitterness on the end. Finally, a malt liquor that shouldn’t be hidden in a paper bag. Let it breathe in a big snifter and soak it all in–put all that paper-bag-malt-liquor shame aside. 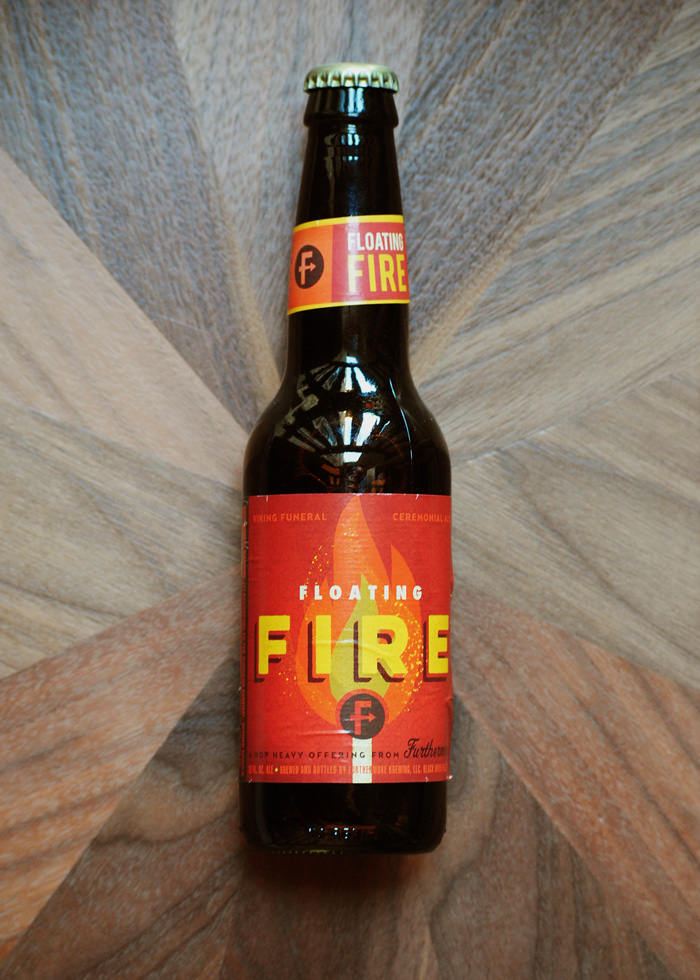 At first, I took this beer’s name just as reference to what I assumed was a red ale. Fire=red, red ale=red: all good. And it’s not my fault to have thought so, considering the style listed on the label is “ceremonial ale.” Boy was I wrong. This is a smokey pale ale with a robust malt backbone and roasty finish. Oddly, it was a bit sweet with a prickly mouthfeel as well. The most intriguing thing about this one, was after it was left to breathe a bit. It opened up to a big, peaty, scotch-like ale. Interesting beer, but a bit unbalanced. 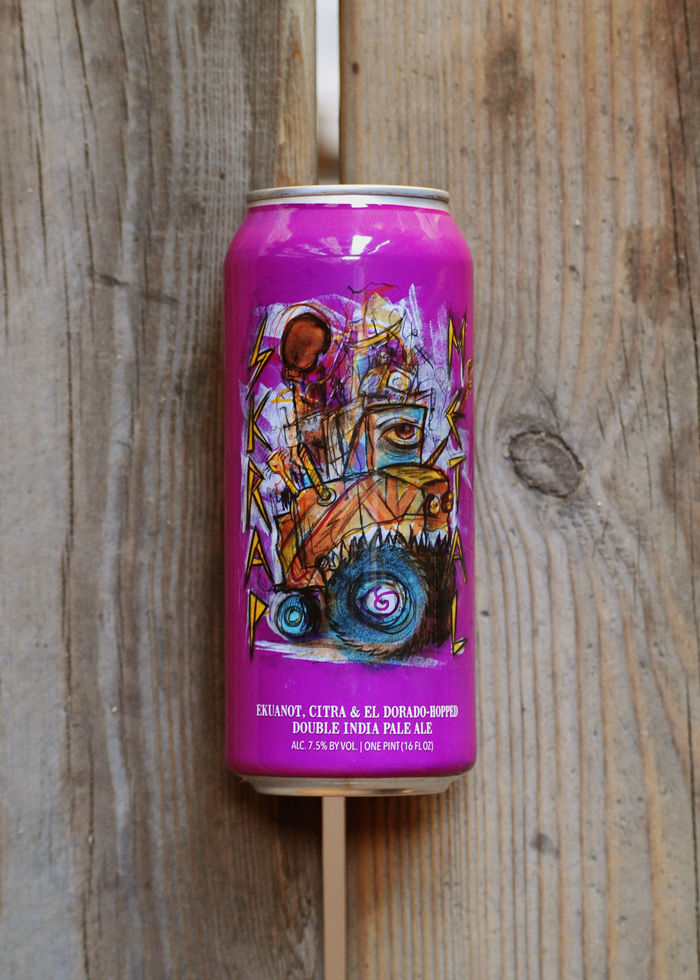 Continuing their tradition of showcasing unusual or hard to find hop varietals, Hop Butcher For The World’s latest release Skrap Metal features Ekuanot, Citra, and El Dorado in a hazy, mango and tropical fruit- forward, Double IPA. This one reminds us of Unwind Your Mind, in our opinion one of the best beers to come from the brewery. This is one Double IPA you’d have no trouble drinking more than one of and is surprisingly refreshing at 7.5%. 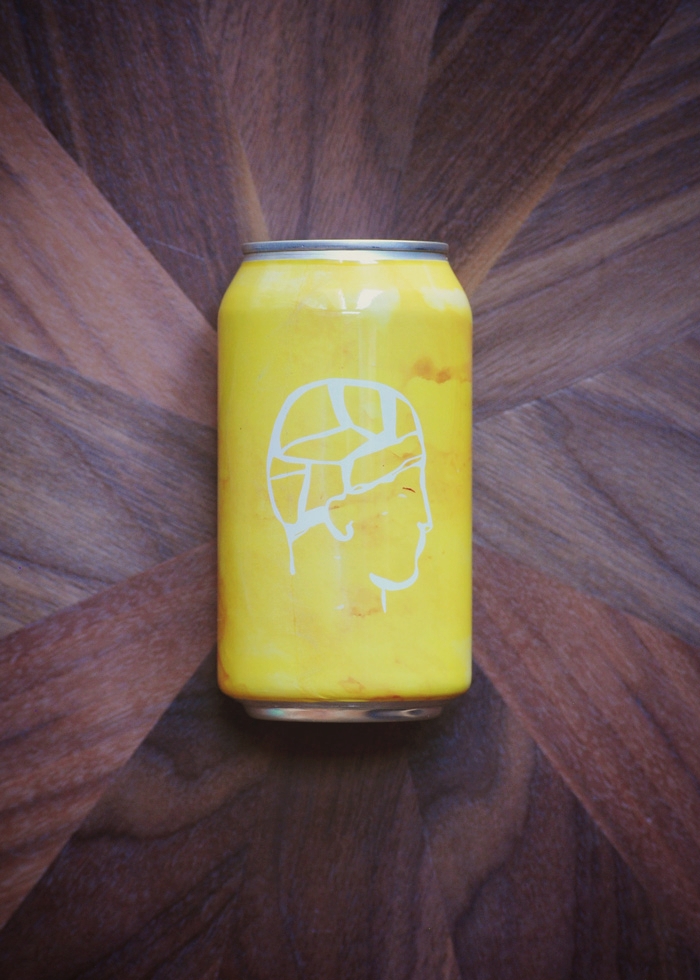 When you market a beer as a “popcorn cream ale,” you’re going to have plenty of detractors. While cream ales are getting more attention as of late, it’s safe to say popcorn beers (if that’s a thing) are not. Especially considering it’s a recognized off-flavor (Diacetyl). Still, I tend to enjoy beers with a corny profile. But this cream ale came across less creamy/buttery and more smokey/burnt. Those burnt kernels at the bottom of the bag kind of burnt, sadly. 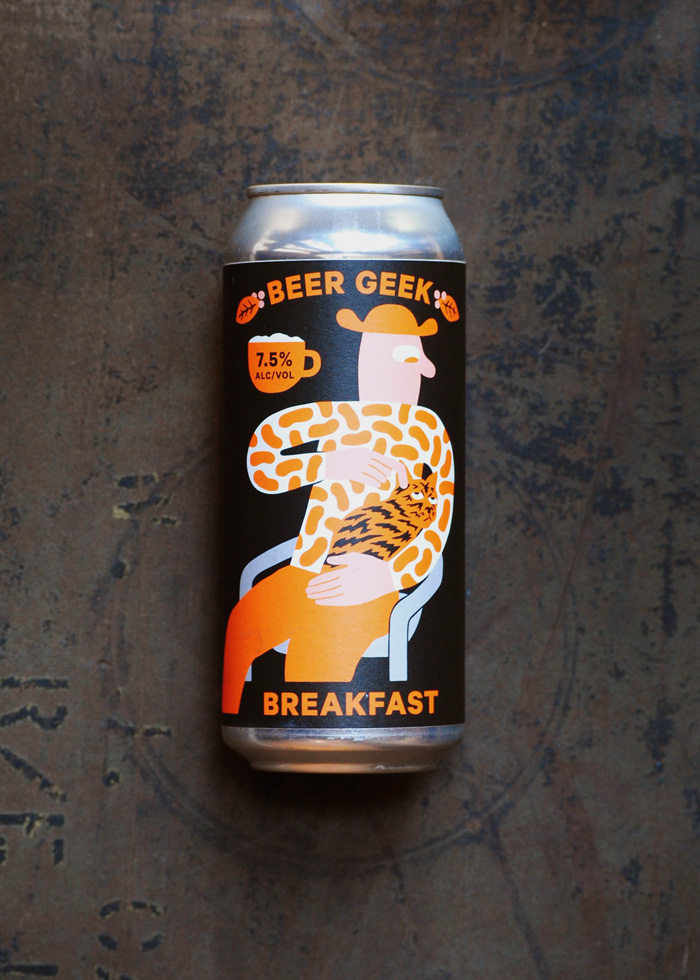 Mikkeller San Diego’s version of Beer Geek Breakfast pours a pitch black. It’s as if you were about to drink oil, or liquid obsidian. But when the head forms, you notice that perfectly sandy, nutty tan color that only a coffee stout can provide. The coffee notes present themselves as soon as it enters the glass, and upon first sip, you recognize a dark roast and a slightly bitter dark chocolate profile. This beer is akin to any dark roast pour-over–but rather than chewy, it’s a dense, dry stout. Spot on. 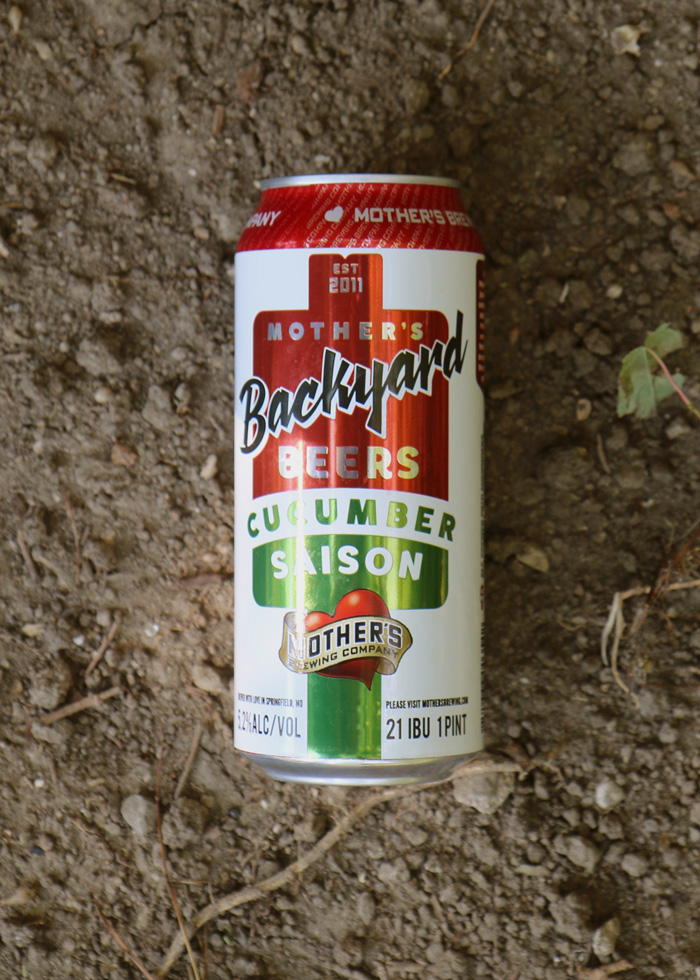 There are few things more refreshing and thirst quenching in the summer than cucumbers. This isn’t the first beer with cucumber we’ve had, but in the past the cucumber was always propped up with other added ingredients. This brew, on the other hand, has all the characters you would expect from a saison with nice spice on the nose and in the flavor from the Belgian yeast. The cucumber really shines all the way through without ever becoming gimmicky. 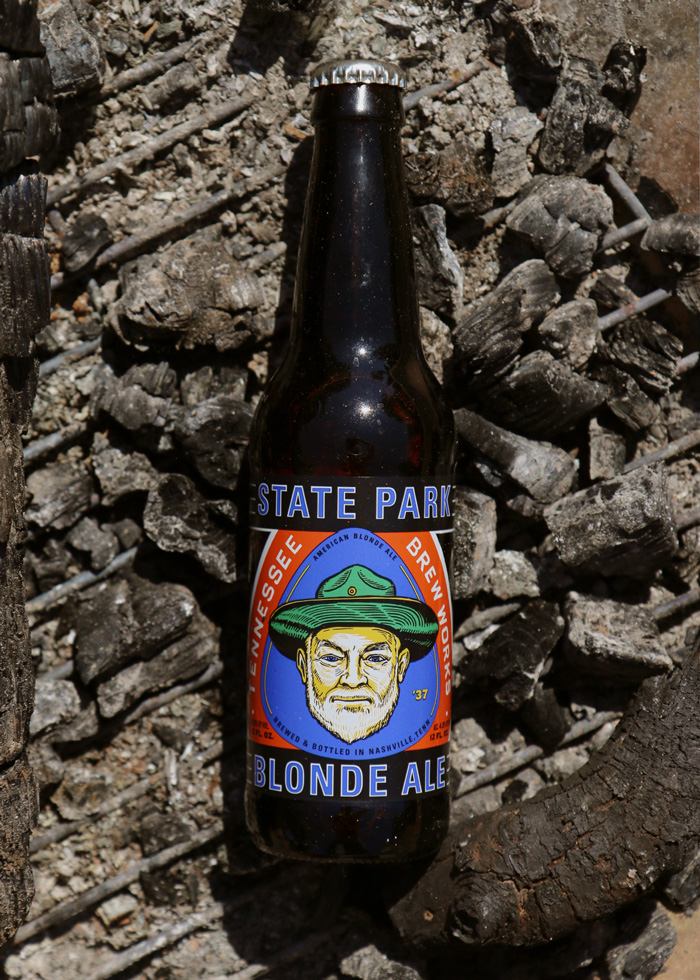 In the era of bourbon barrel aged stouts and New England style IPAs, the classic blonde ale is typically barred to the bottom of the tap list. While, like most blondes, this edition coming out of Nashville, doesn’t offer anything overly exciting, it is a great example of an everyday drinker. Light malts, with a little sweetness from the classic ale yeast, and a hearty does of grassy hops blend to make a beer perfect for sharing with your craft and non-craft drinking friends alike. 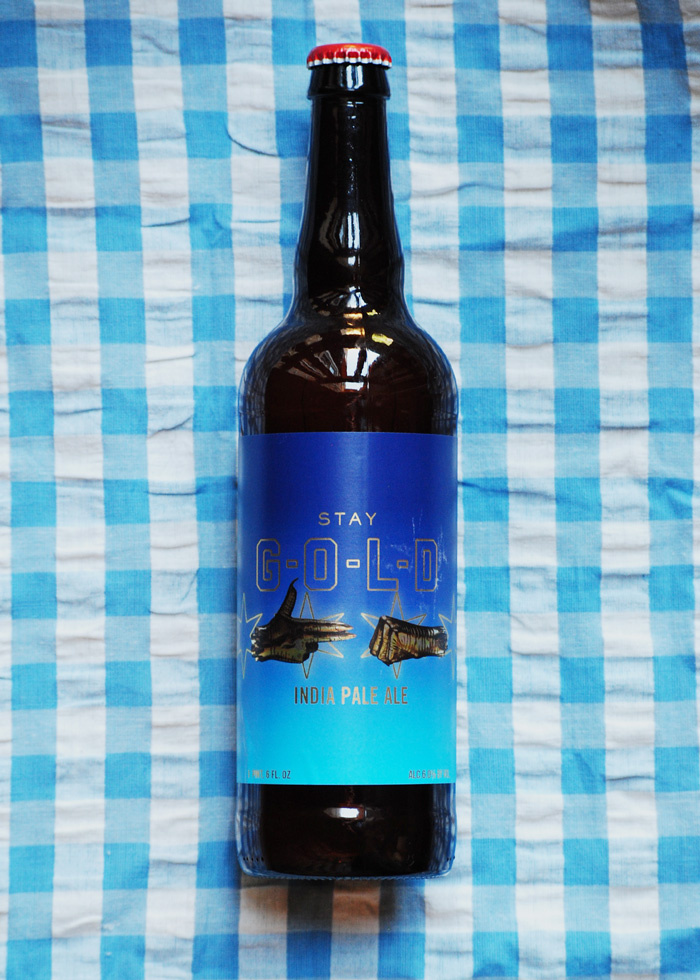 If hype could be bottled, this beer would be it. A collab between Brooklyn’s Interboro, Chicago’s Pipeworks, and rap duo Run The Jewels, this ultra limited, New England style IPA will be hard to come by and quickly consumed. There’s a lot to love here as a hazy pour yields citrus and tropical fruit aroma and a balanced sweetness that counters the mild bitterness from the hops. We would have liked to see a slightly higher ABV to give it a little more body, but we’d gladly drink this one again. 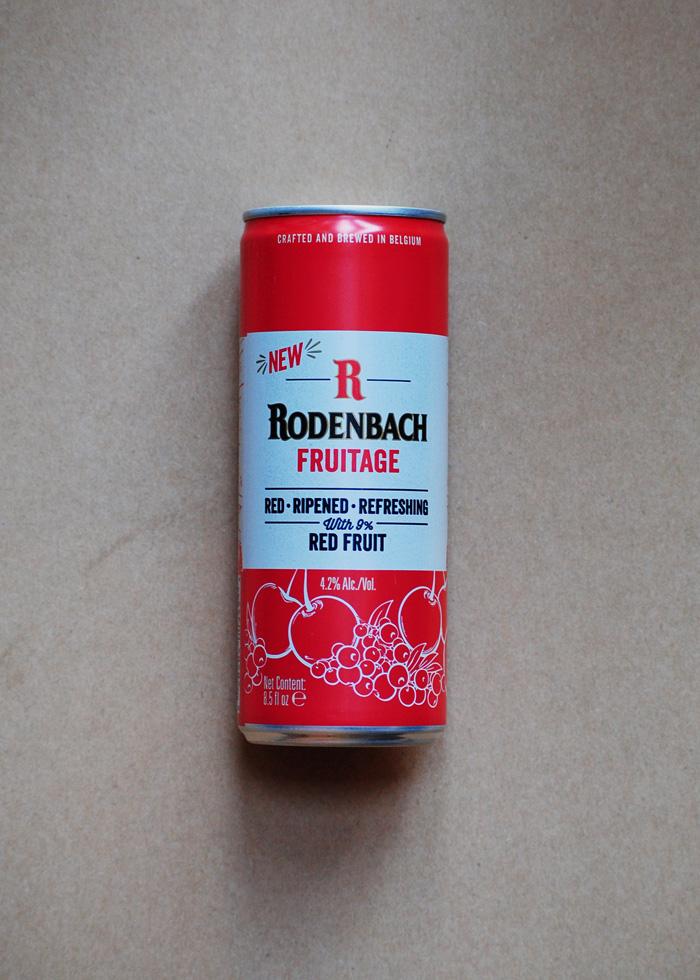 Belgian beers in Red Bull sized cans… what is the world coming to? This mildly sour, fruit forward offering from the much coveted brewer isn’t necessarily anything new, but the packaging is sure to attract a whole new audience. The blend of new and old beer give this just a hint of sour that just manages to show itself through the sweetness of the red fruit. Picture drinking this one poolside or…gasp…mixing it with your favorite spirit. 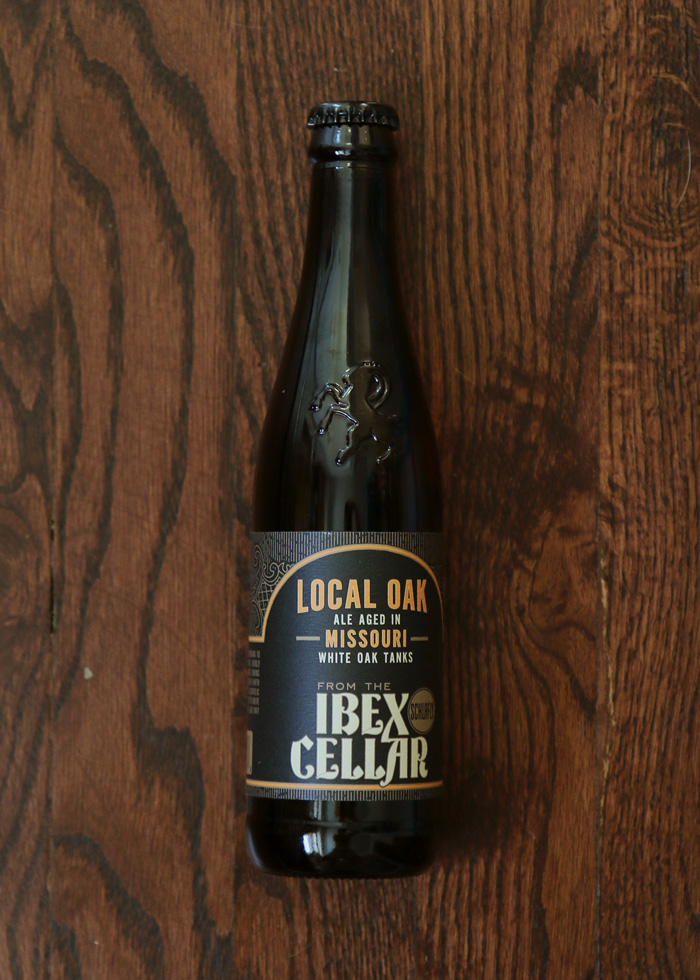 The first brew to come out of Schlafly’s new foeders, and the fourth from the new Ibex Cellar series, Local Oak is a light and tart wheat beer perfect for the hot summer nights. The aroma features grainy straw and wheat with a lacto tartness and fresh oak, while this Belgian inspired brew shines with citrus, peach, and white grapes on the tongue. The finish is dry washing away all of the fruit leaving a puckering lemon flavor making you go back for more. 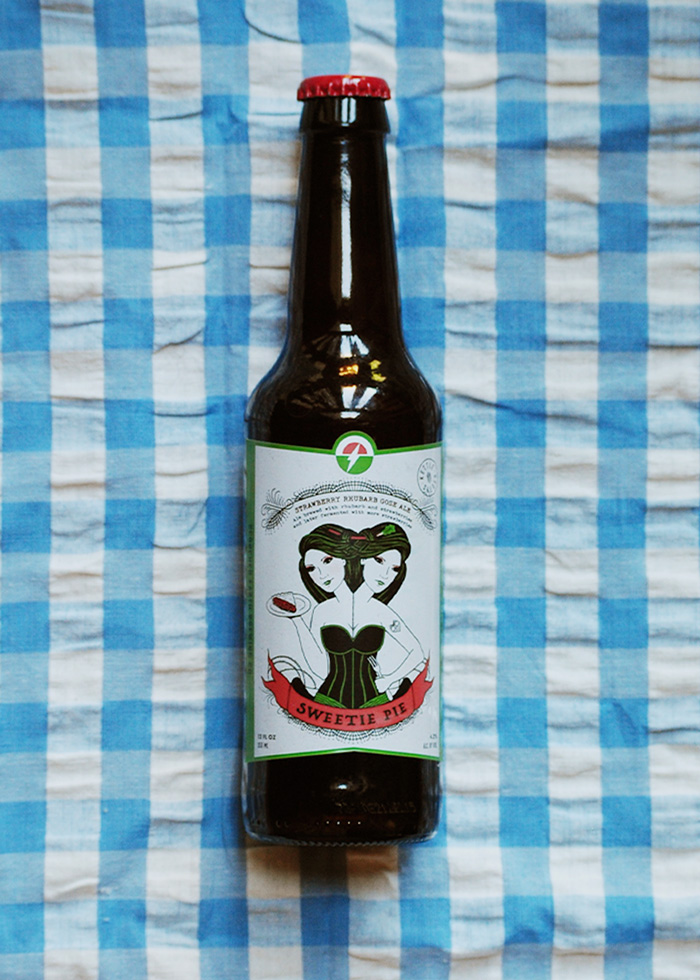 As far as goses go, this strawberry rhubarb [pie] version from Scorched Earth is on the thinner side. That’s not to say it’s unpleasant, it just lacks the tongue-buckling salty-sour you expect from the style. It pours a beautiful orange/pink hue and is a delecate balance of fruity sweet and rhubarb bittersweet. As a weary sour drinker, this would be a great introduction. For those looking for your typical German gose, you may be dissapointed. 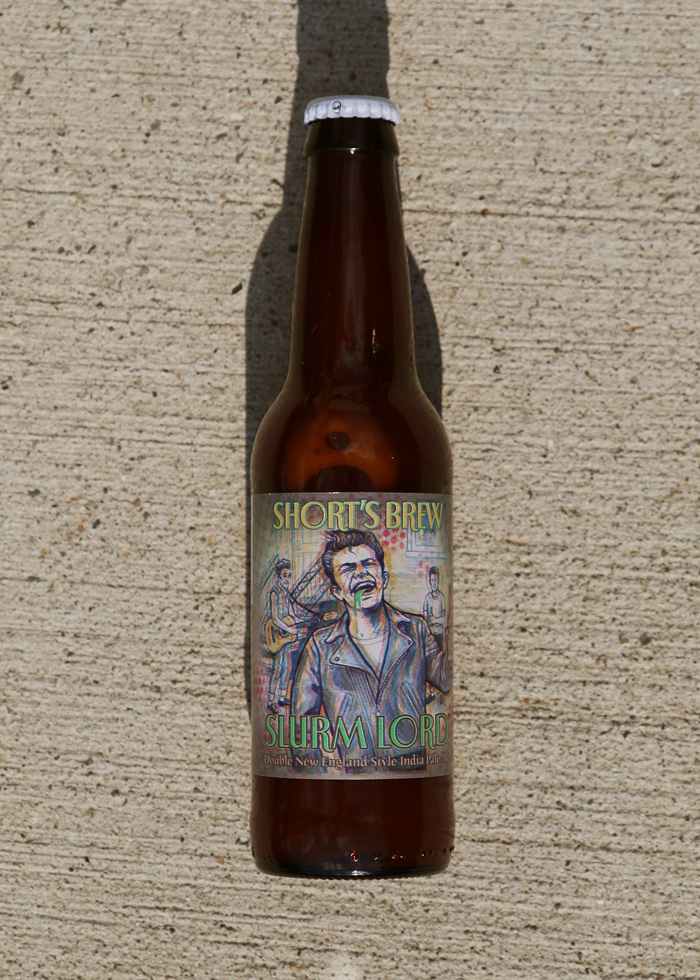 Back in June we reviewed Shorts’ first packaged NEIPA, Slurm. Hot off it’s success, the Michigan brewery continues to ride that NEIPA hype train with a double dose of “slurm.” This double NEIPA has a huge bouquet of mango, pineapple, citrus, and a healthy does of dank. Slurm Lord has a big creamy mouthfeel, but is still easy drinking, and while it is juicy as expected with the style, a heavy does of pine and resin last long after the glass is empty.