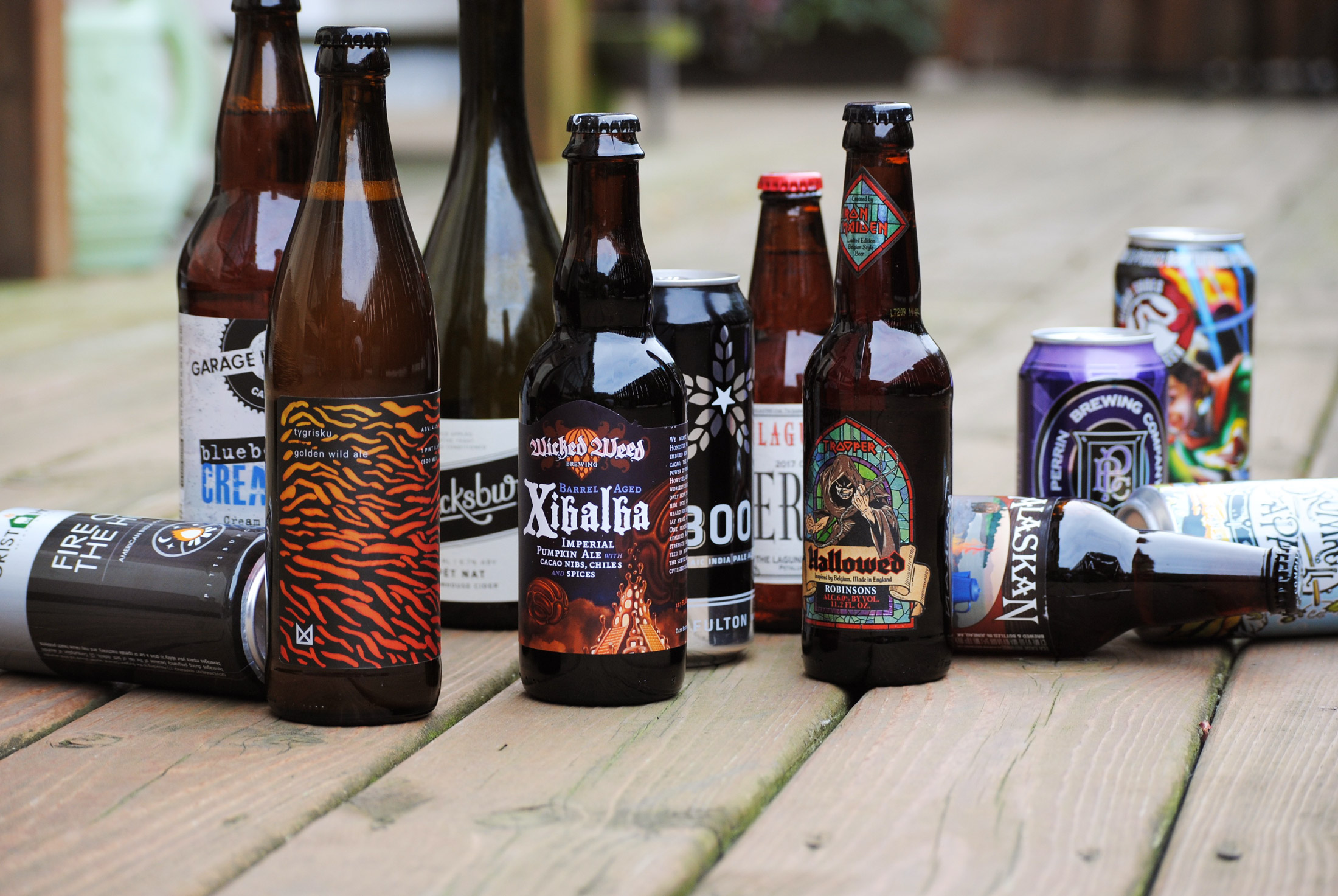 We’ve tasted through the following 15 beers for October, and rated them according to our very own interpretation of the BJCP scoring guidelines, on a scale of 100 and listed in alphabetical order. This month, Belgian-inspired beers get a look, malt-forwardness is celebrated, single fruits get highlighted and farmhouse funk is king. Plus, a pumpkin beer. We considered aroma, appearance, flavor, mouthfeel, overall impression and trueness to style. It’s not an exact science–we know this. We just don’t like to pass on the opportunity to drink…more beer. Cheers! 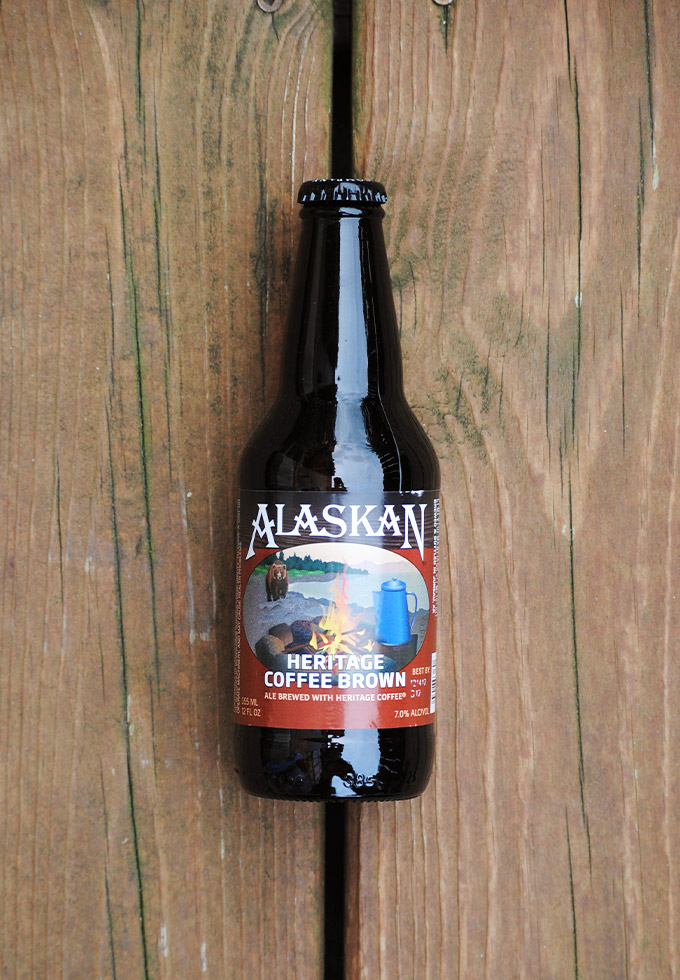 This is coffee the way it should be included in a beer. Instead of overpowering the relatively light bodied brown ale, the it adds just enough roasty bitterness to compliment the slight sweetness present in the base beer. We also get a hint of the Cascade and Calypso hops showing through right at the end. This is a ‘beer first, coffee second’ kind of beer. And we dig it. 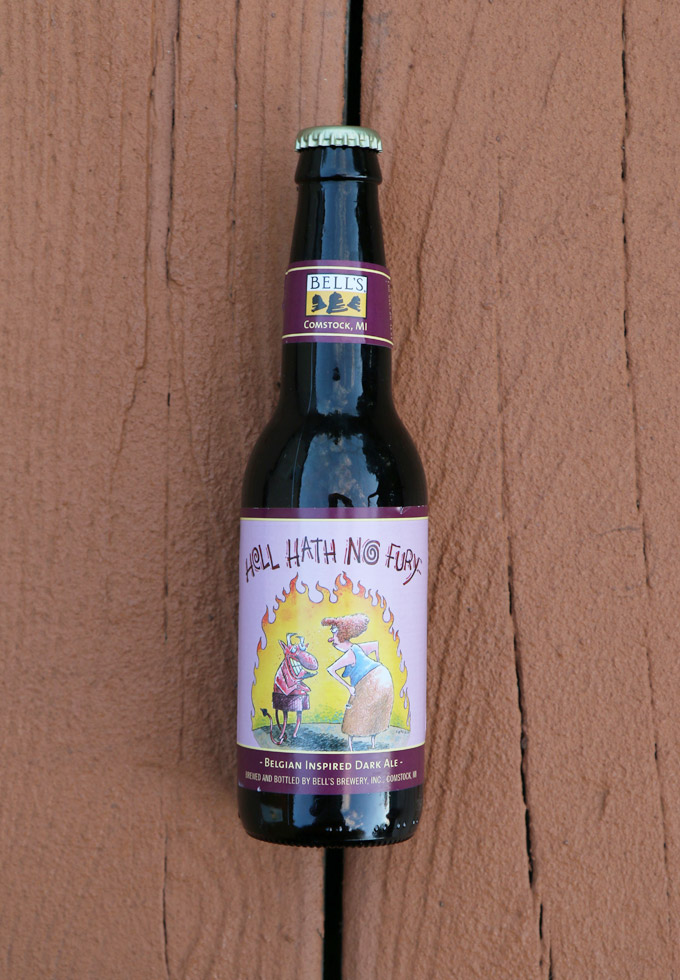 Brought back from Bell’s impressive archives, Hell Hath No Fury was brewed with a Belgian dubbel in mind, but drinks closer to a stout. Coffee and dark chocolate are balanced by cherries and spice from the Belgian yeast, with a pleasant warming quality that combine for a truly complex drinking experience. Perfect for the hopefully cooler nights ahead. 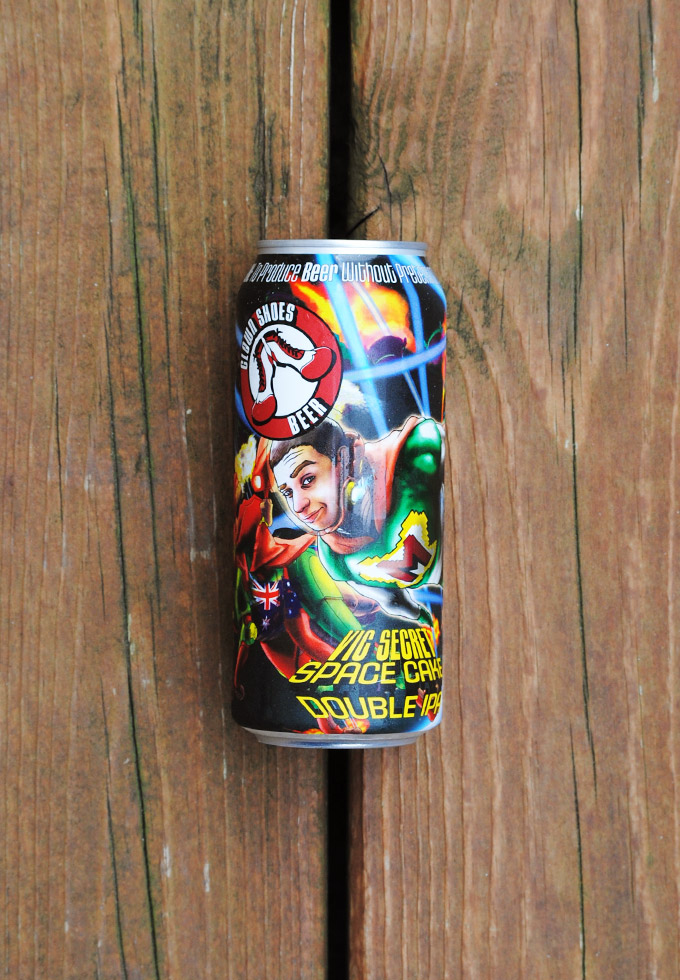 You’ve probably had Space Cake, the readily available DIPA flagship from this Massachusetts brewery. This variant of the popular brew is dry-hopped with Australian Vic Secret hops. There’s a decent grapefruit aroma that follows through to the tongue on this one. But overall it’s just a solid, well balanced DIPA. It certainly doesn’t drink at its 9% ABV, however, so be careful if you reach for a second. 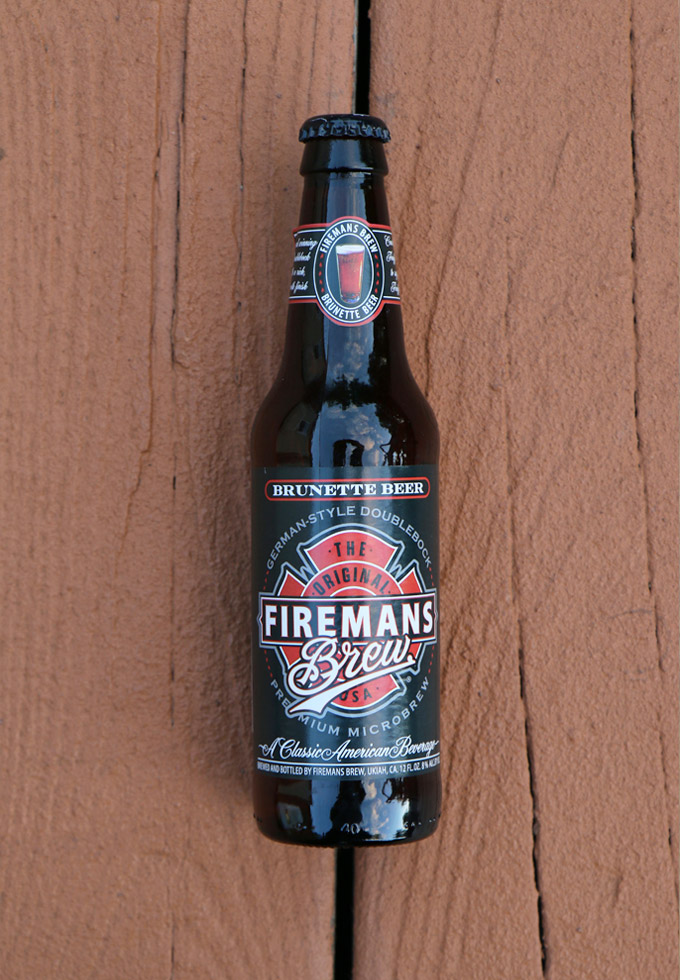 Doublebocks may not be all the craze these days, but this offering from Fireman’s Brew was a pleasant surprise in this month’s lineup. Rich, dark malts full of cocoa and milk chocolate–with a hint of caramel–make for a bold brew at 8%. Yet, it finishes smooth with a pleasantly dry finish. It may lack some of the complexities of its German ancestors, but it’s still a solid offering all around. 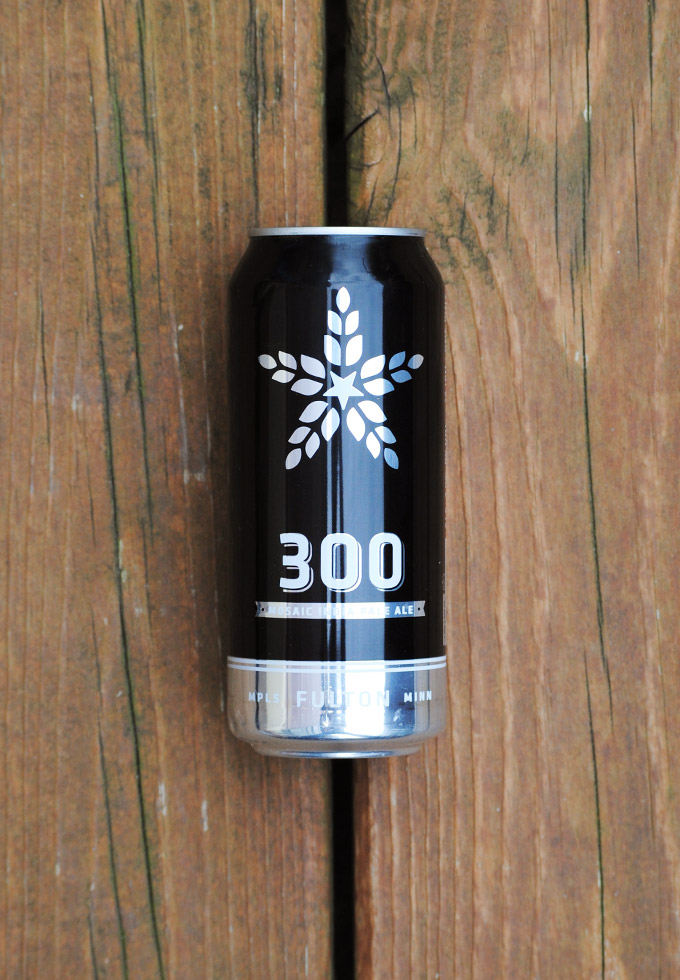 Originally brewed as a one-off to celebrate their 300th batch, this Mosaic IPA was beckoned back due to demand. The dense black can is a bit deceiving, when you consider the sweet citrus-meets-pine, berry-like hop profile the pale ale exudes. This one may not be as distinct a nod to the variety as some others on the market, but it makes for a less palate-wrecking version. Still, as the brewery puts it, 300 is pure “hop candy.” 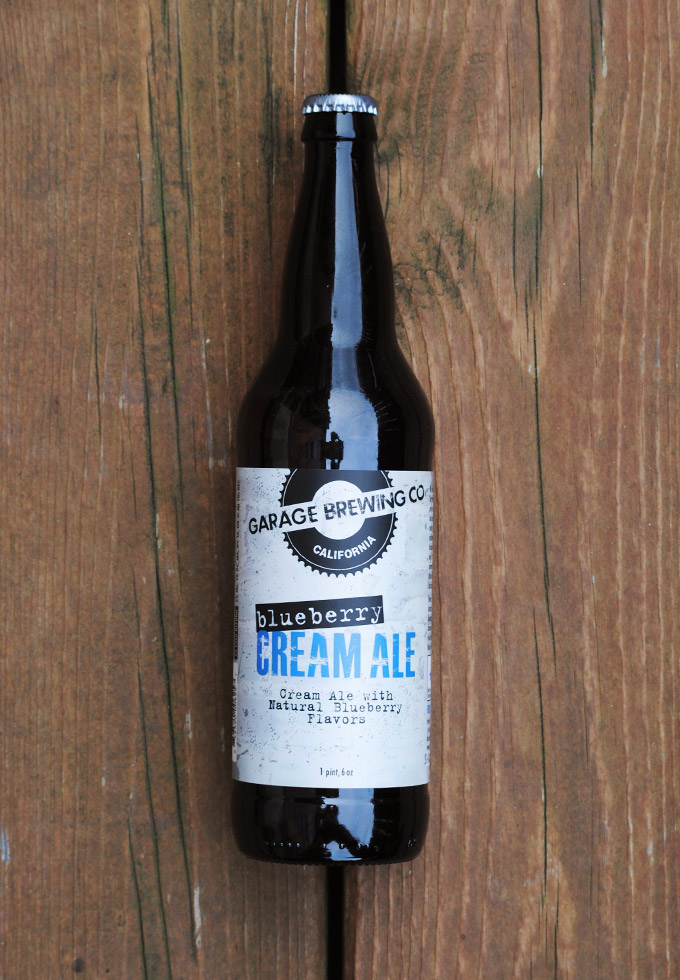 Cream ales are getting more play lately, and provide a great base beer for various adjuncts. However, blueberry can often be a polarizing ingredient and its negative effects played out here. While this beer pours a beautiful rosé-like color, its unlikely the flavor profile will impress you as much. It’s a pit more prickly on the tongue than you’d want from a cream ale. And the best taste comparison we could pin: blueberry Pop-Tarts. 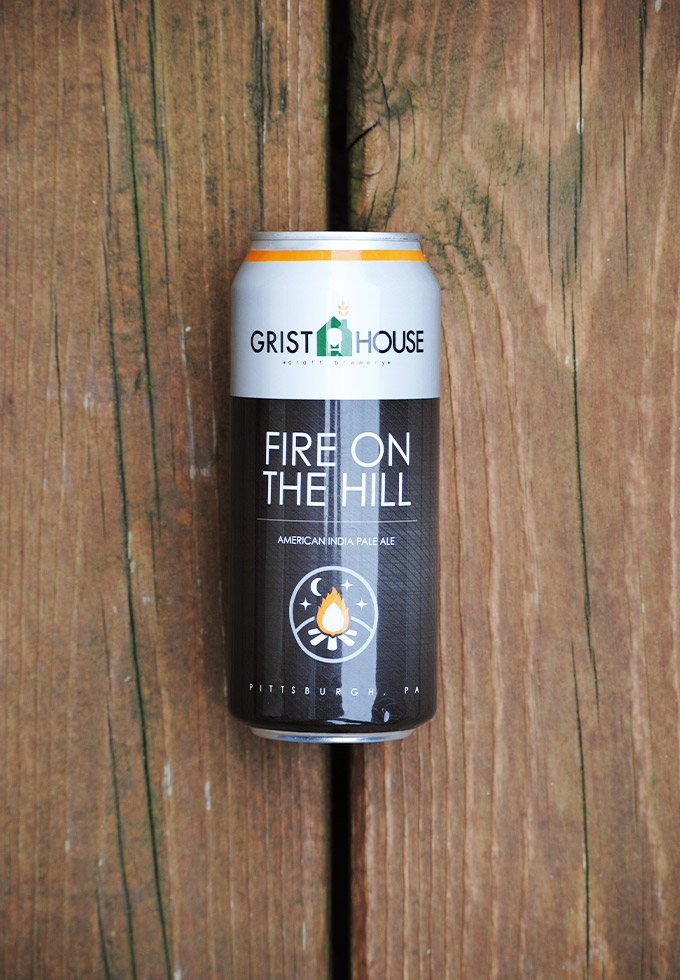 GRIST HOUSE
Fire on the Hill

Dank, pine notes hit you on the nose when you first pour this one. That follows through with spruce and citrus notes as you sip. The name is a nod to the brewery’s owner who once hosted a backyard bonfire in the hills of Pittsburgh, that prompted unaware neighbors to dial the fire department. There’s just enough malt sweetness present to make for a very well rounded IPA–that we’d gladly drink another of, any time of year, bonfire or not. 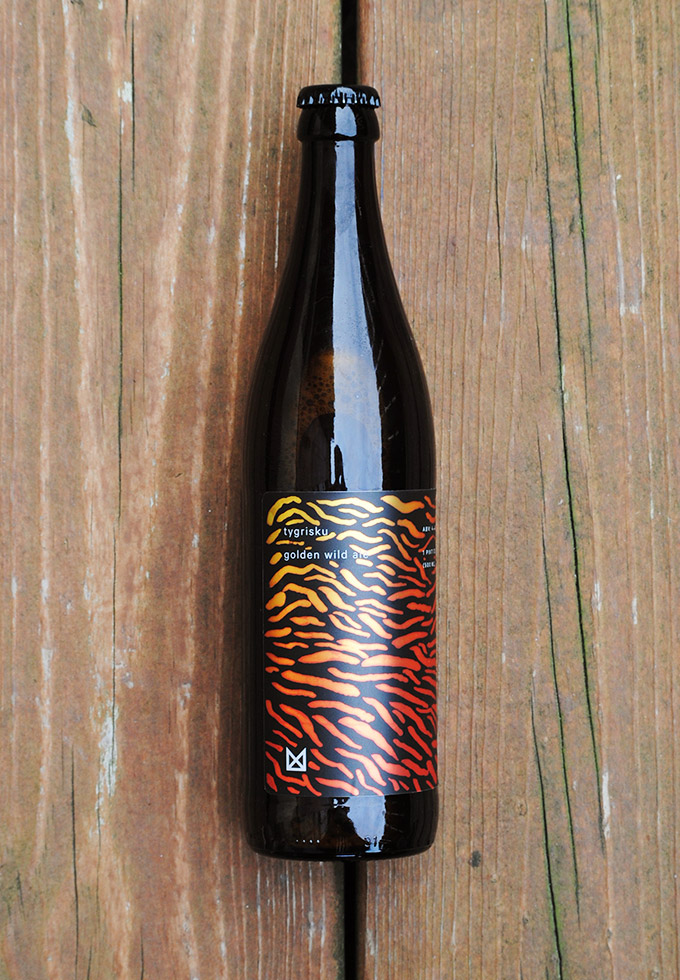 If you’re still unfamiliar with South Side Chicago’s Marz Community Brewing, that’s sure to change soon enough. And ’til their taproom opens, you’ll have to keep reaching for their striking 500 mls to satiate your curiosity. Such was the case for us, with Tygrisku. This straw-gold wild ale is simple–in the best way possible. Its yeast isn’t too funky, nor does it create fruity esters. It’s clean just overall pleasant–really makes you appreciate the simplicity of a well-crafted, approachable beer. 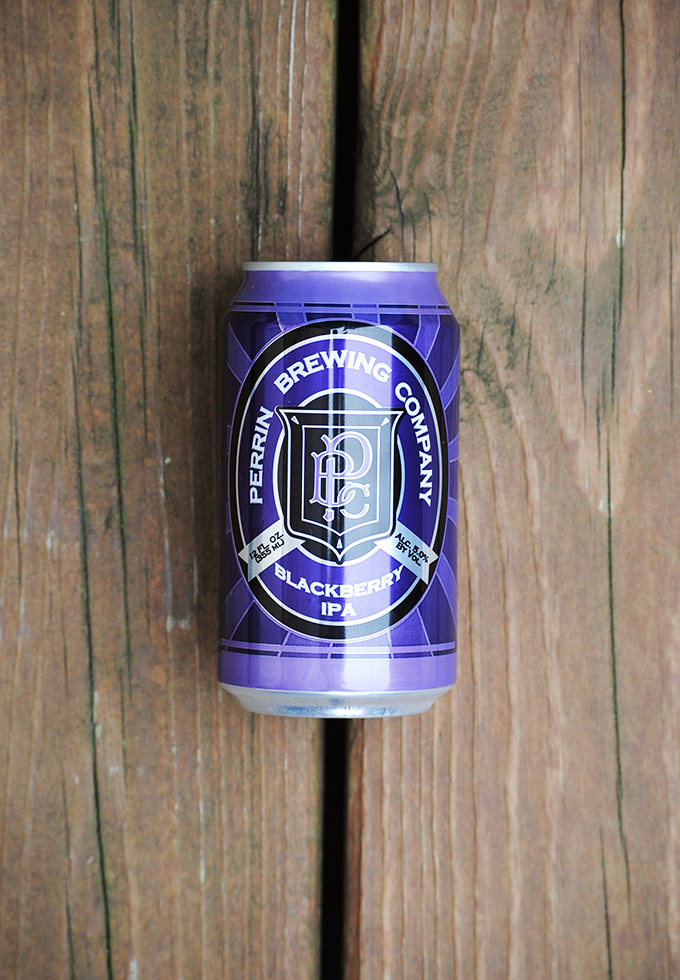 This is a classic case of the adjunct overpowering the beer. If we weren’t told this was an IPA base, there’s probably no chance we’d guess it to be so. The sweetness from the blackberries, while not jarringly sweet, counters any hop bitterness – making this drink a little more along the lines of blackberry soda…or even a bit cough syrupy. It would perhaps be passable on a hot summer’s day, but doesn’t nail it this time of year. 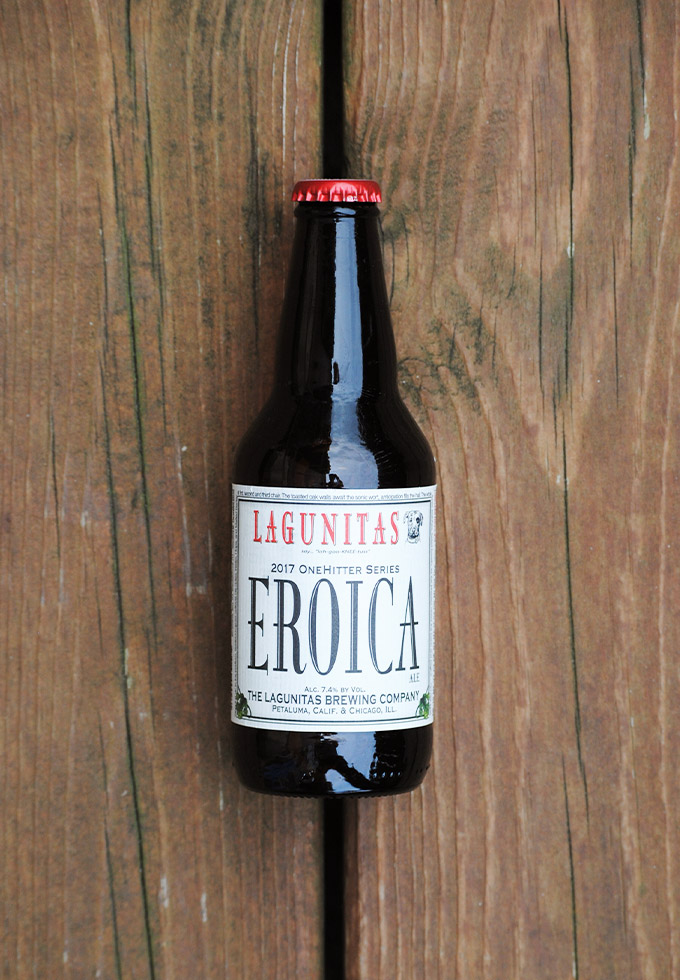 The ambiguity of this beer’s label (what style say you…?) left us eager to get to that first sip. And, for the second month in a row, Lagunitas has provided us with a pleasant surprise. Eroica–after its namesake hop–is a funky farmhouse ale with Brettanomyces. This offering was brought back from the dead (last brewed with the last of such hops in 1999) and aged in red wine barrels for 9 months for a ‘Lagunitas-ified’ take on a farmhouse. Yes. 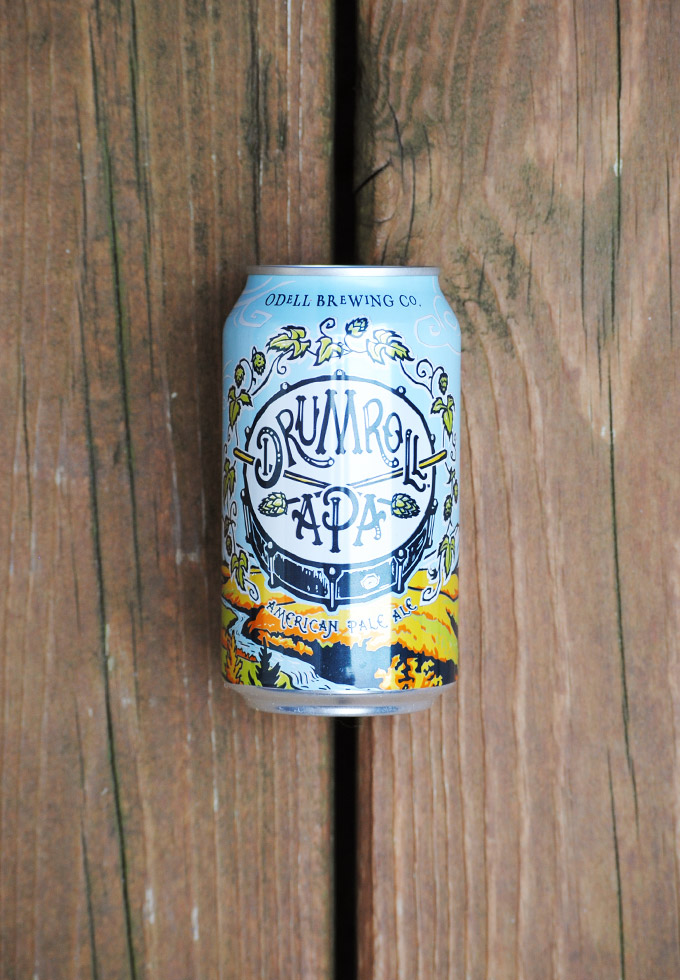 Drumroll may be one of the better APAs to make its way into our rotation as of late. This unfiltered, juicy pale ale is the perfect balance of citrus-meets-pine you can get–an impressive combination of hops result in this sessionable drinker. It’s not too fruity, not too dank. It’s just right. And, it just might enter the mental shortlist of pale ales that you keep for situations where you just aren’t willing to gamble on something new–that ‘never disappoints’ kinda beer. And for that, we’re appreciateive. 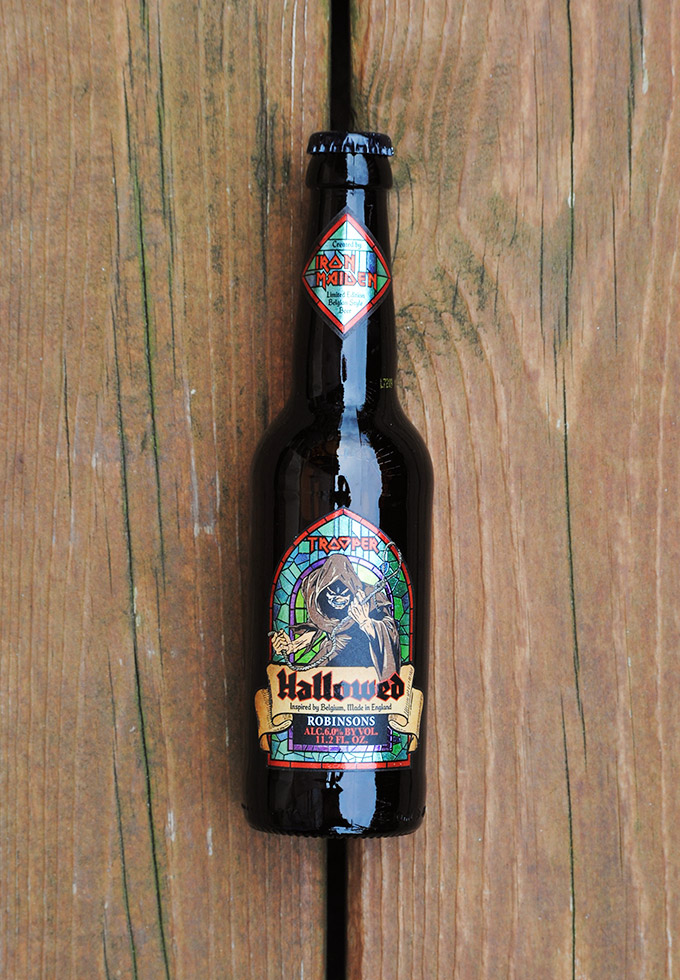 This is a pretty run-of-the-mill Belgian dubbel with a far from average background. Brewed in England in partnership with British rock legends Iron Maiden, it looks like no other Belgian beer you’ve seen before. On the inside, there’s a pretty substantial bready sweetness with a fairly dry yeast-forward finish. It makes for a nice beer for a single pint, but it’s going to wipe your palate for whatever you might drink next. That label art is fun though, eh? 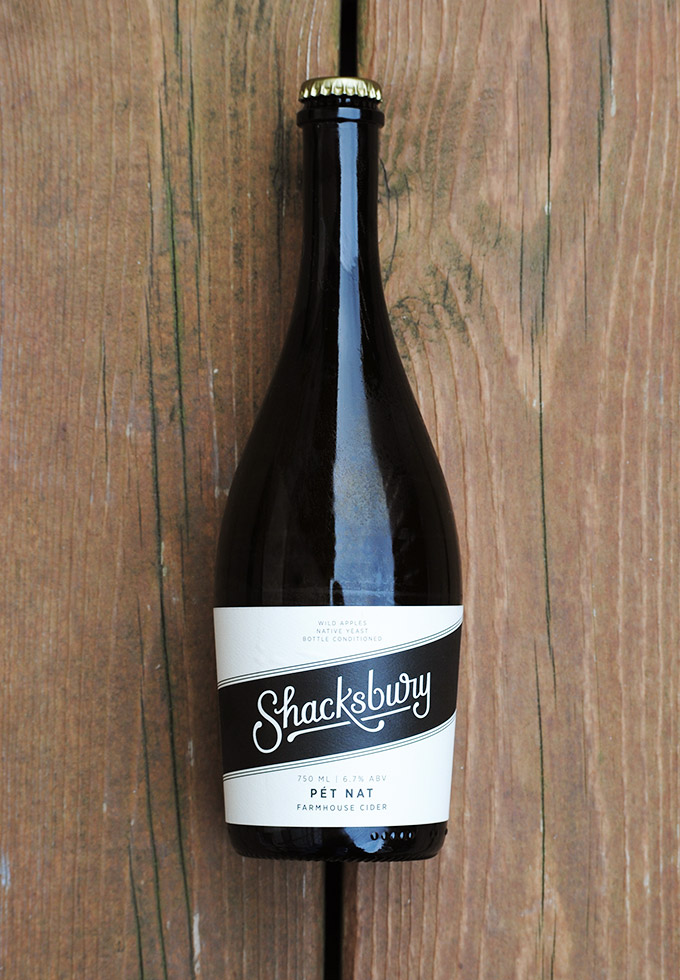 October’s star of the lineup: Ok, so you may never see this one again, and certainly not on Chicago shelves. But we had to include it as this may be the best cider we’ve ever drank. No, really. This farmhouse cider brings just the right level of funk, conjuring memories of some of the finest French ciders we’ve sampled in the past. This isn’t for cider newbies, but for those who like something very atypical in their glass. For a toned down version of this, we’d recommend their Arlo, which is much more readily available. 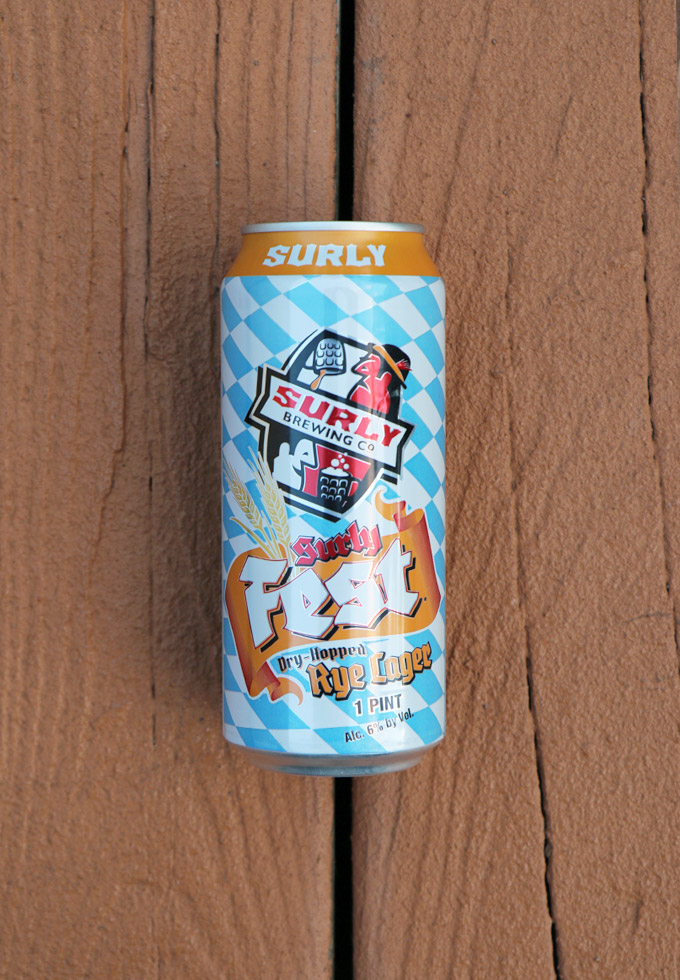 While Surlyfest looks like a Märzen in the glass, it’s not your typical Oktoberfest lager–but it is a perfect companion for the drinking season. No sweet toffee notes here, just a big floral hop note and a nice rye spice. The flavor matches the aroma with a nice bready characteristic from the Vienna malt. And while we do love a good Märzen, this is a great escape when you want a change of pace from the sweeter, more traditional–and abundant–offerings. 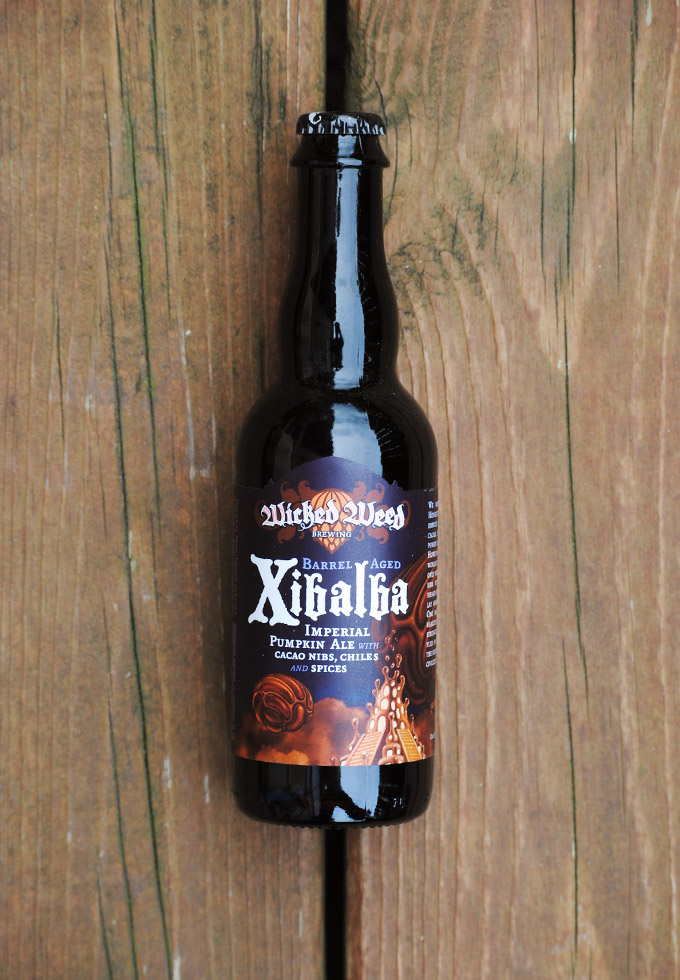 As you’d expect from the love’em-or-hate’em brewery, Wicked Weed, there’s a lot going on in this beer. The base is a pumpkin ale, with cocao nibs (a hint of dryness), chiles (providing a spicy sweet bite), and seasonal spices (cinnamon?). The bourbon characteristics help pull all of these contrasting ingredients together, and help make for an impressive fall sipper. The pumpkin beer for beer nerd who chastise pumpkin beers.