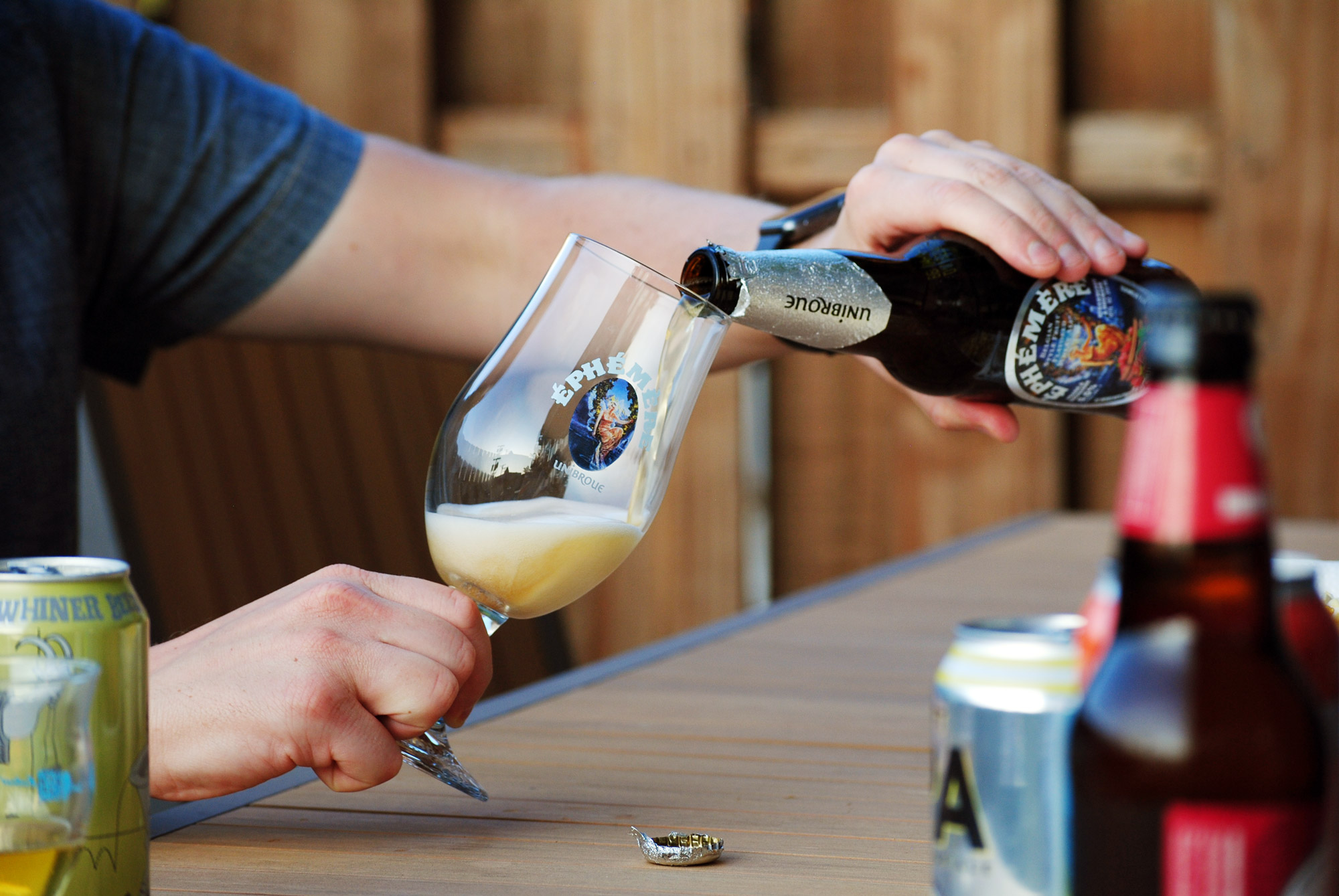 We tasted through the following 14 beers for August and rated them according to our very own interpretation of the BJCP scoring guidelines, on a scale of 100, listed in alphabetical order. We considered aroma, appearance, flavor, mouthfeel, overall impression and trueness to style. It’s not an exact science–we know this. We just don’t like to pass on the opportunity to drink more beer.

This month we showcase Chicago beers as 50% of the lineup, we sample a GABF gold medalist, oak-aging is highlighted, and fruit is plentiful–including a prominent display in one such Canadian beer perfect to pair with your late summer dessert. 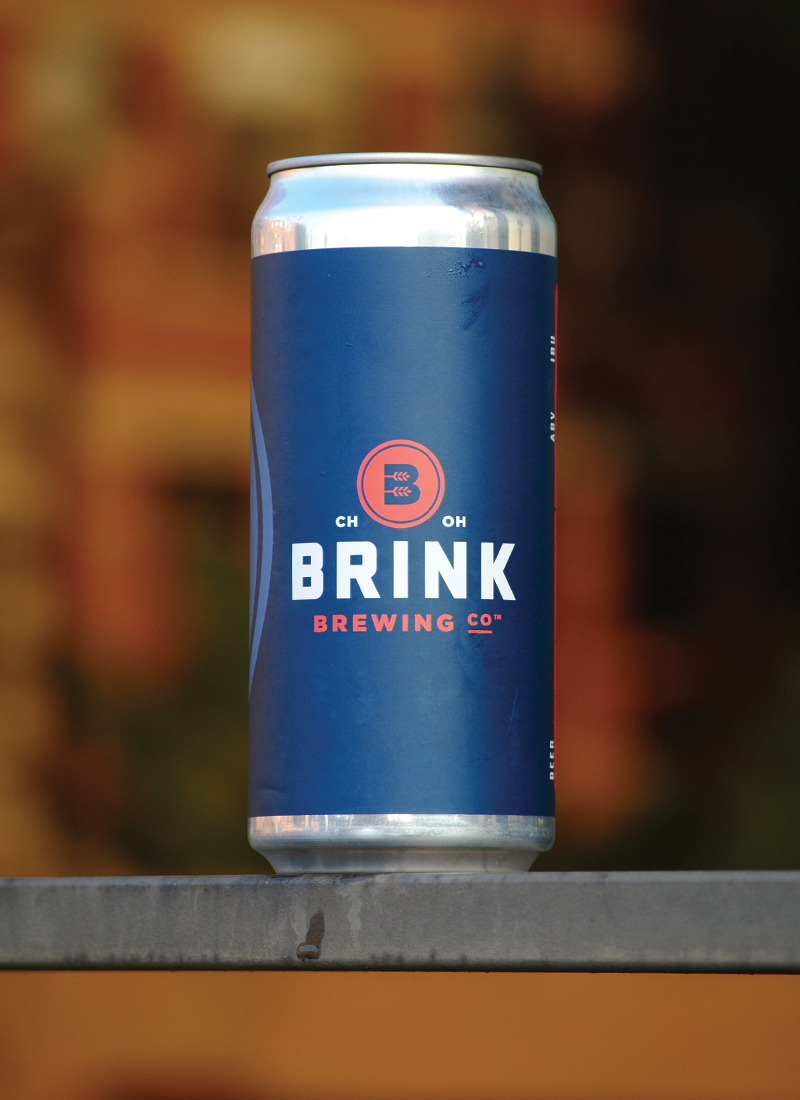 When you win a GABF gold medal for an English mild, we take notice. It’s impossible to mask flaws in this style and our first taste of Cincy’s Brink Brewing was a faithful interpretation of one of the oldest styles out there. While it’s on the higher end of ABVs than what you’d find in the motherland, this is a beer you could drink all day. Subdued caramel malt sweetness and a nutty finish with no obvious hop character, Hold the Reins was incredibly drinkable. It’s an old school interpretation and a great reminder of beers that are great, simply because of their simplicity. 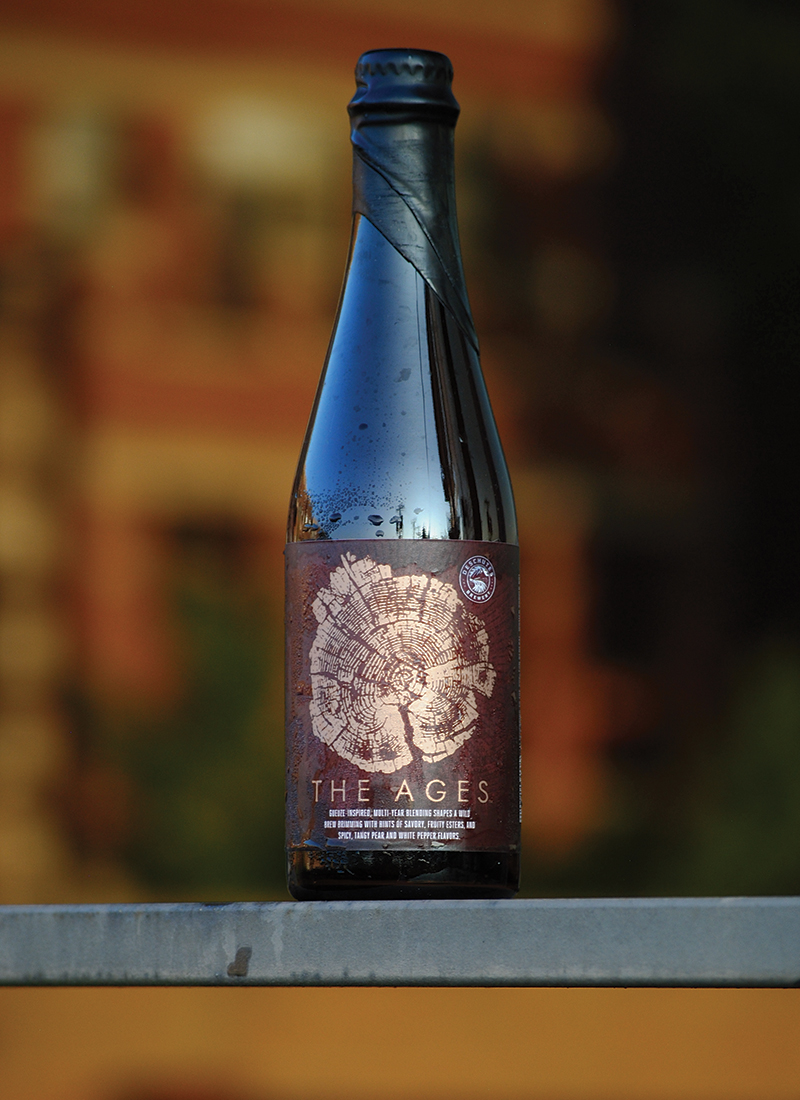 No matter what Deschutes does in their Reserve Series, they always seem to impress. The Ages is no different. A “Gueze-inspired,” multi-year blend of oak-aged wild beers, there’s a lot going on inside this bottle. It pours a cloudy golden hue and has a big, quickly dissipating head. Fruity esters hit you right in the nose and you can almost smell the acidity. Fortunately when tasted, that tartness mellows, though the fruit remains. Pear is dominant here—so much so that you could easily have someone believe it was actually in the beer. Enjoyable from first to last sip. 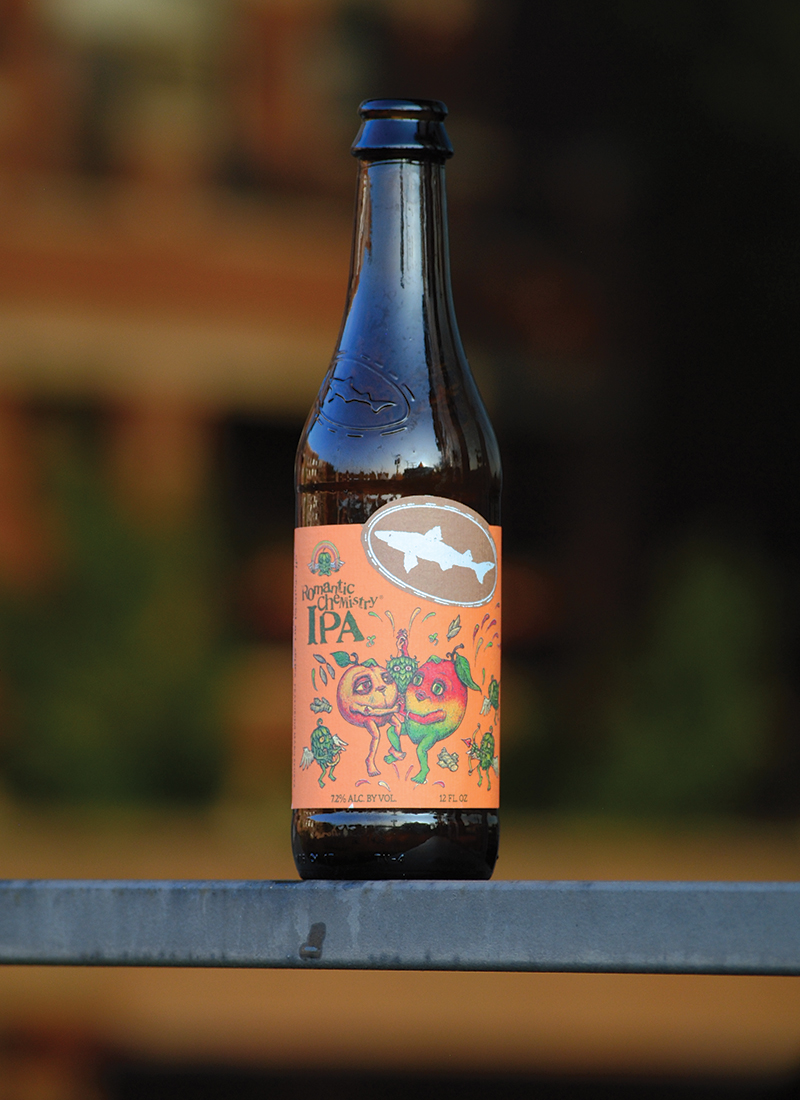 The label from Romantic Chemistry is almost a bit deceiving. Not in regards to the fruit tie-in, but moreso in that it seems to elicit a more bright, crisp, citrusy profile. Instead, this IPA presented a more dense, syrupy citrus body with a back end bite from the ginger and an overall malty finish. If an IPA could be chewy, this might just be the one. You’re certainly dealing with a traditional IPA style here, complimented by a fruity hop bitterness. An interesting take, but more one-and-done. 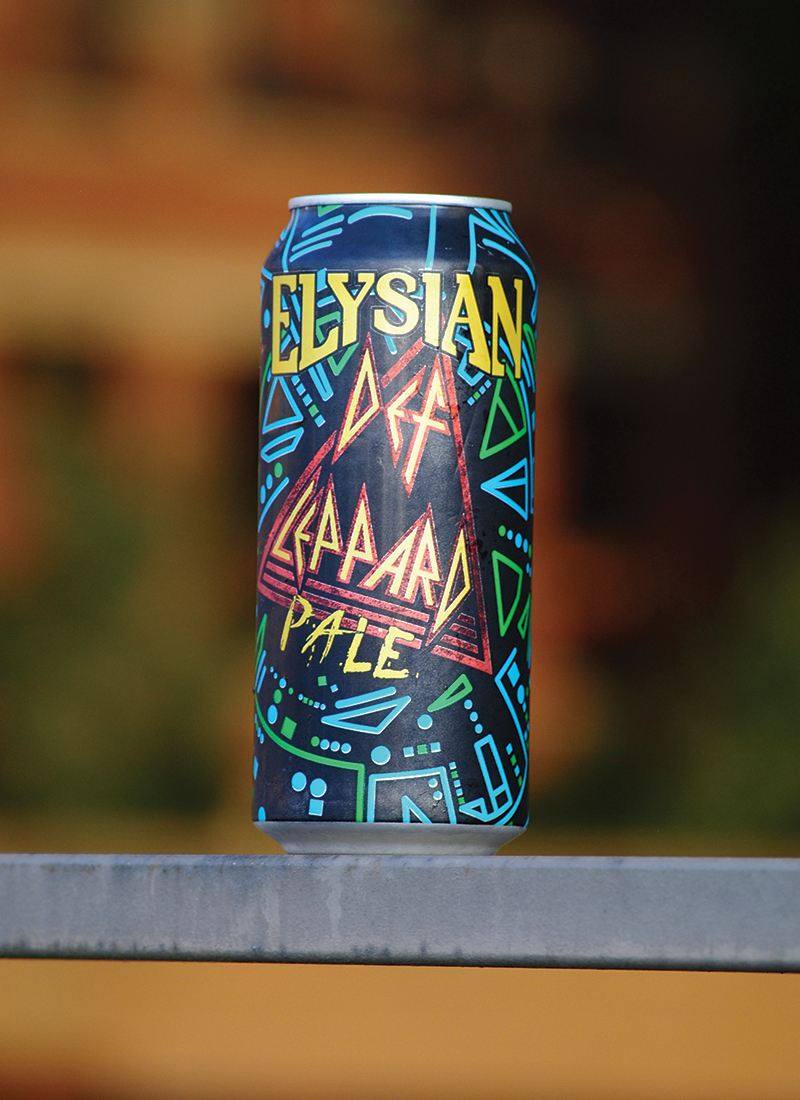 Aside from the obvious marketing tie-in, this beer was brewed to bring together two pillars of the brewing world—British malt and American hops. It does exactly that as the bright and citrus heavy Cascade, Simcoe, Chinook, and Magnum hops counter nicely with the British 2-row malt. This is a pretty straightforward, to-style Northwest beer with a dominant citrus nose and a balanced finish. It’s not the most memorable one out there, but is a nice reminder of fo those West Coast IPAs. 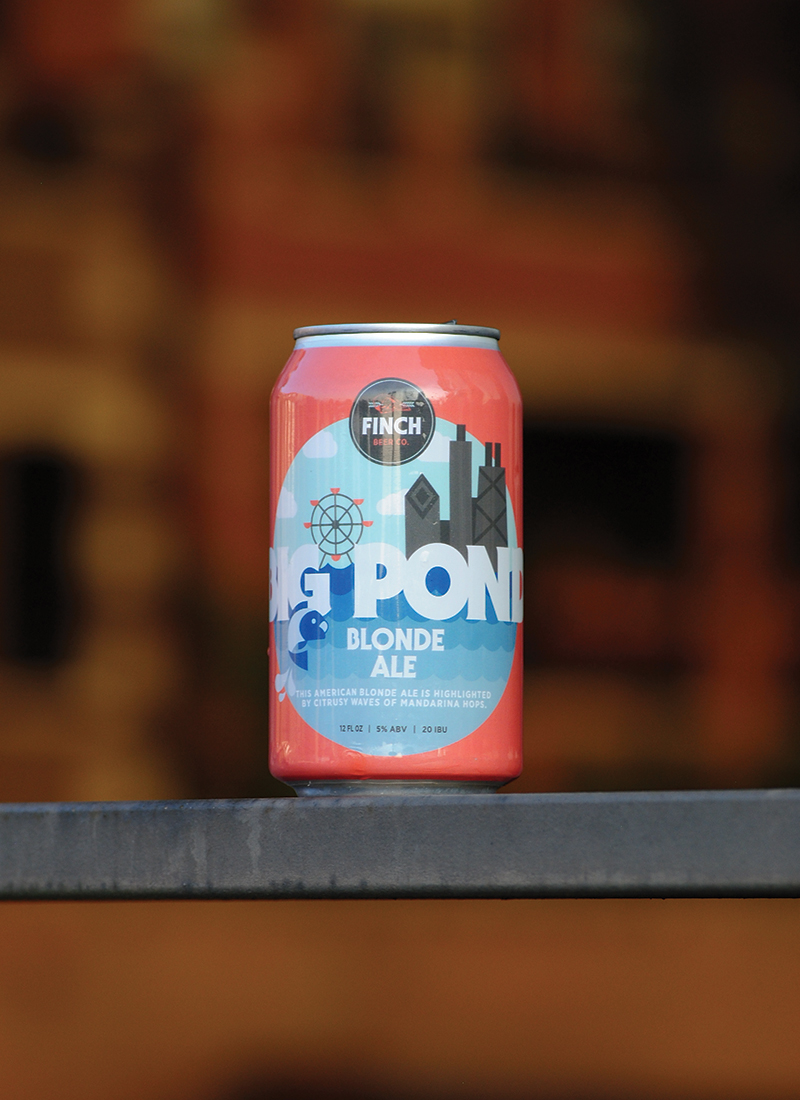 As far as purchasing blonde ales go, we have to admit that there wasn’t a ton of expectation set for this one from Finch Beer Co. However, we were pleasantly surprised at not only the approachability (that you expect from the style), but the depth to this beer. It’s a crisp and refreshing easy drinker upon first sip, that gives way to a bready, biscuity, ale with a prickly tinge of citrus. Just another well-executed ale from the third iteration of the bird-themed brewery from Chicago’s West Side. 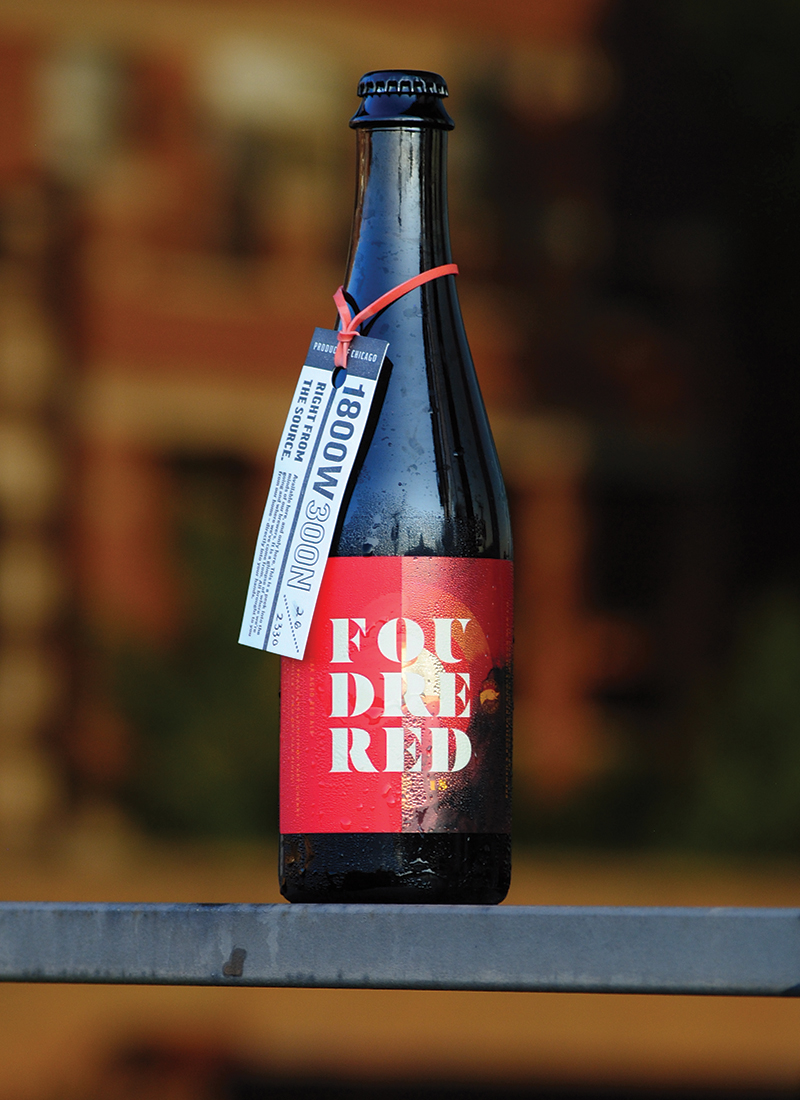 After the not-so-rare-ness of Goose’s BCBS Rare release, folks have been skeptical of what the ever-growing brewery dubs ‘limited’ these days. So, when the Fulton taproom’s first ever bottle release was unveiled, it might not have garnered as much buzz as it maybe should have. We can assure you, this wood-aged red ale hits the mark. It’s a perfectly woody, dark cherry, vanilla-y wild ale with a good deal of body thanks to 12 mo. in bourbon barrels. A pleasant sipper, at only $8 to boot. 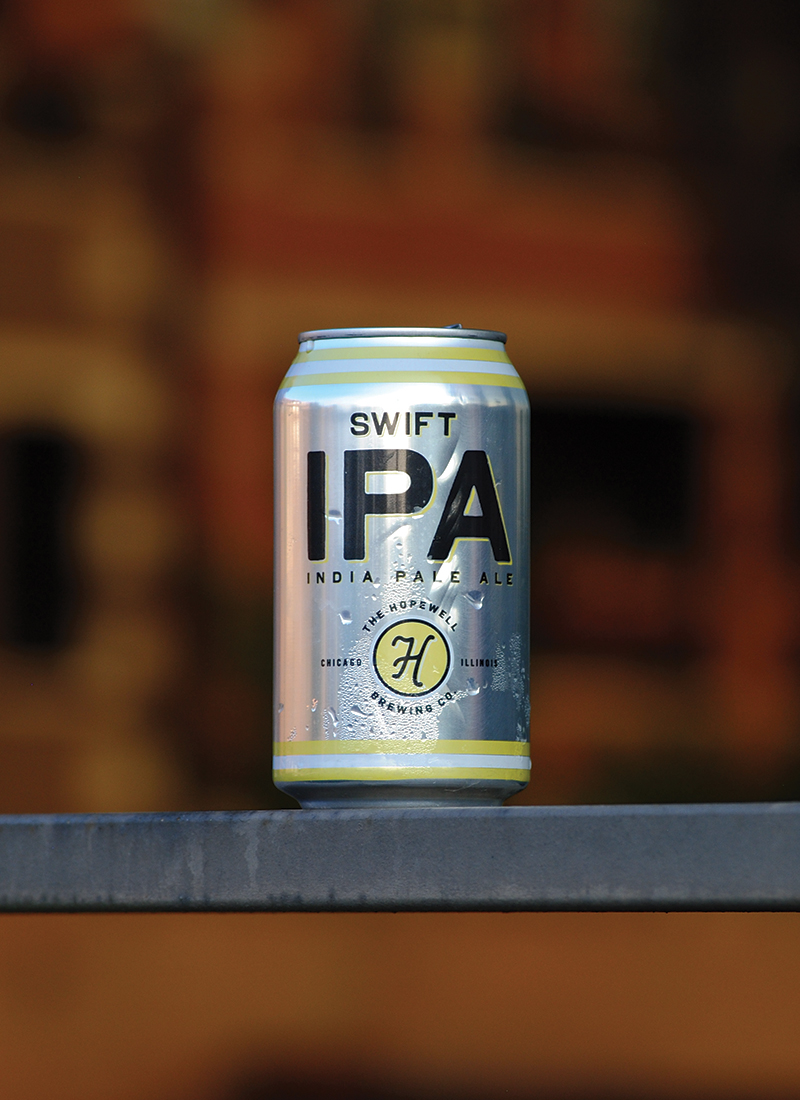 We’re big fans of Hopewell at The Hop Review, so we were pretty excited to give only their second canned offering a try, with Swift. Unfortunately, we were left disappointed as this didn’t live up to our high expectations, and our memories of the beer poured in the taproom. An odd, almost biscuit-like aroma is dominant off the bat and that follows through to a distinctly dry, piney, bitter finish. We very well might being too hard on this, but our review panel found this, sadly, to be a miss. 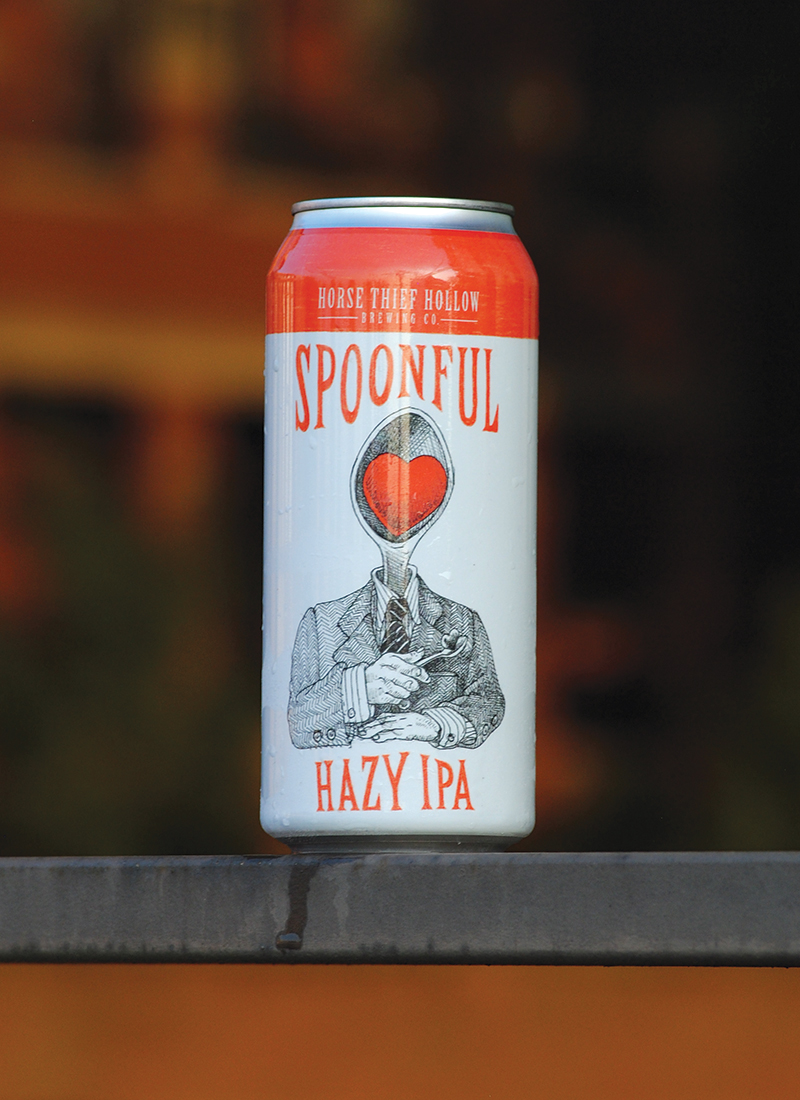 Horse Thief Hollow has quietly made a name for itself on Chicago’s far South Side, particularly in the hazy game as of late. And with the brewery’s first foray into cans, Spoonful is ‘trendy’ in a can. A big citrus, melon-like, nose greets you when you pop the can. No light is getting through this beer but at only 6.5%, we were pleased to get a very dry finish that’s not always found in this style. Definitely a beer we could drink a few of, if not the most interesting hazy IPA we’ve had from HTH. 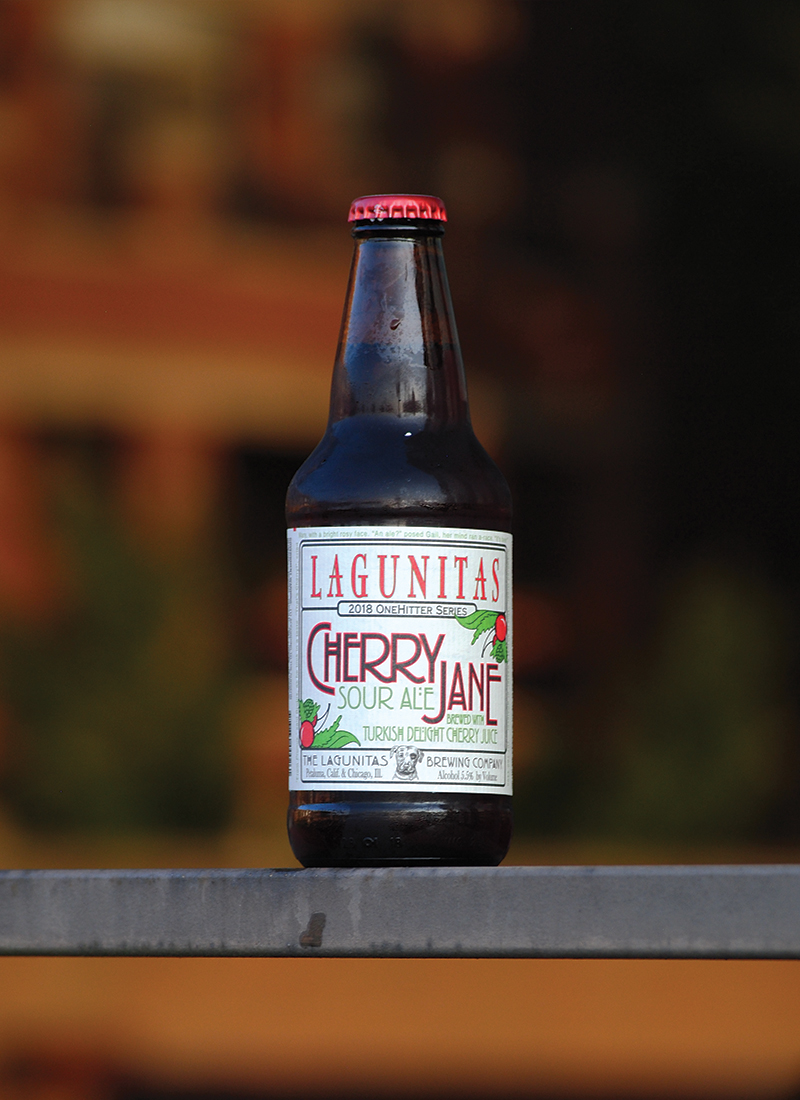 With a portfolio of impressive and approachable sour beers, we were intrigued to get a sample of Cherry Jane. But for whatever it was, this mostly seemed to fall short in expectation for us. It pours a beautiful ruby red, and gives off a pleasant aroma. Still, it’s sweetness seems to overpower the tartness in a slightly unbalanced manner. It comes across as more maraschino cherry candy than it does a funky wild ale. Reserve this for fans of the obviously fruited beers. 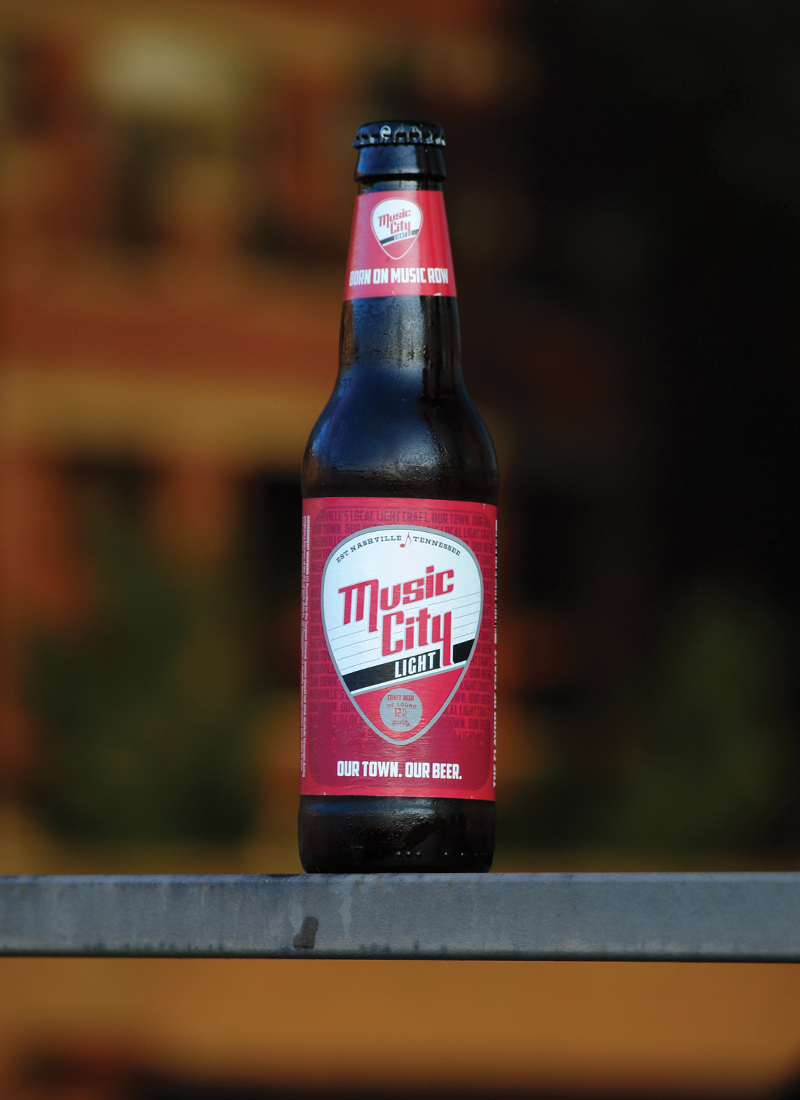 We’ll get this out of the way—this beer tastes almost exactly as you expect it to. Biscuity malt sweetness and a slight, but nearly non-existent hop character make for a somewhat unmemorable experience. The thing is, that’s maybe exactly what they were aiming for. Music City Light is that beer for those who want something that’s not macro yet still approachable. It’s not often you see “Light” on a craft beer label, but we suppose if it’s gonna be there, this is what is should taste like. 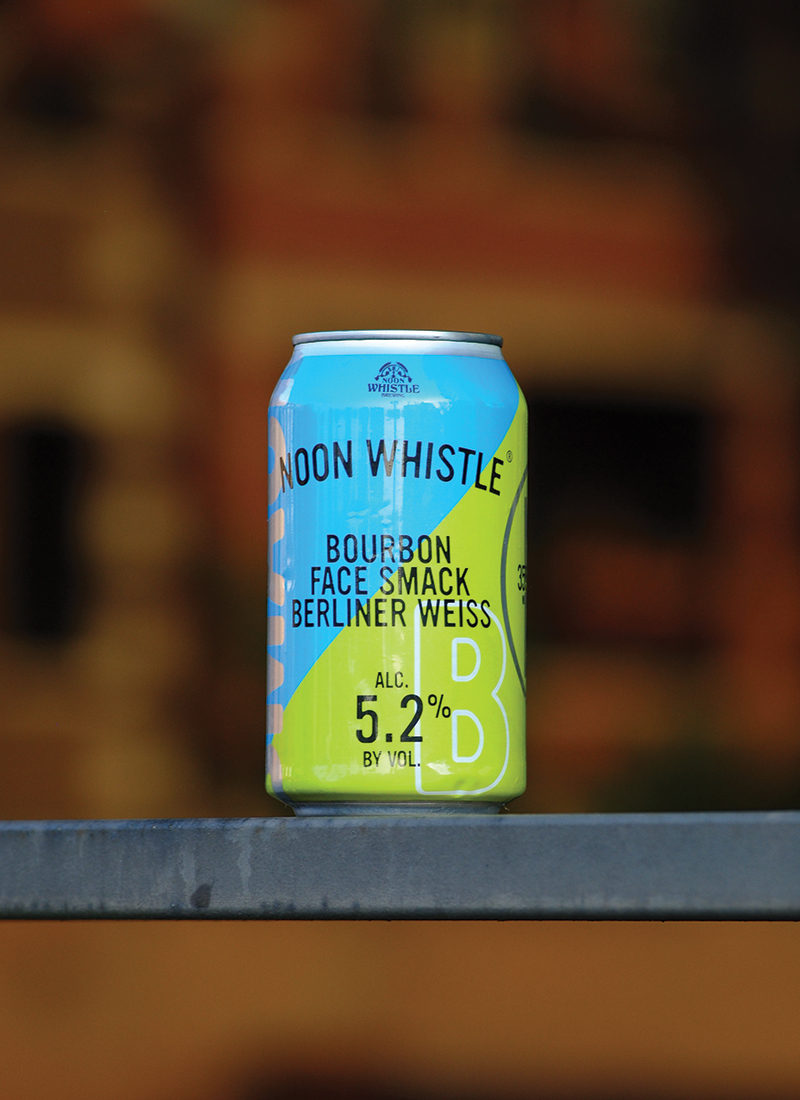 Nothing about the combination of bourbon/wood/vanilla notes and the notoriously low-ABV/sour/cloudy Berliner Weiss seems to make sense. Yet, somehow, ‘Face Smack’ makes it work. When you crack into it, a massive dose of bourbon aroma hits your nose. Upon first sip, a sweet almost cider-like profile presents itself with a slight lingering tartness. Then right at the end, a warm bourbon finish closes it all out. This wins the intriguing award this month. 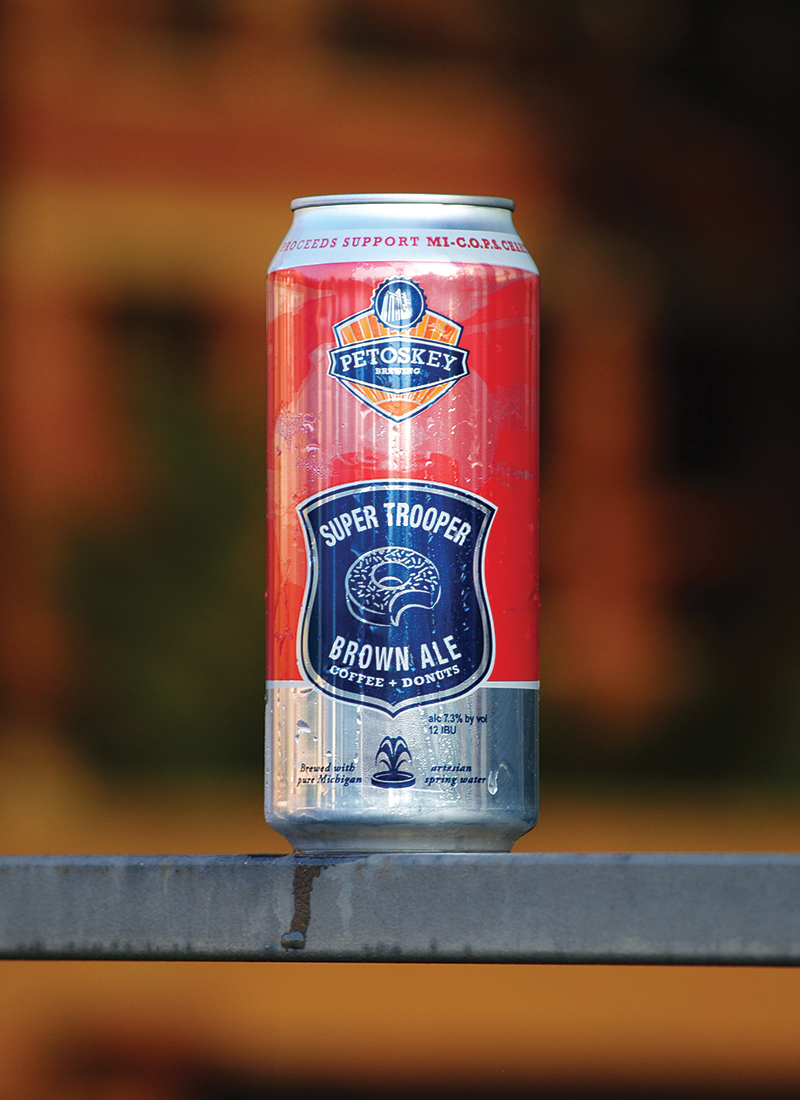 With a name like Super Trooper Brown Ale Coffee & Donuts, we were expecting something big, doughy, sweet, and over the top. This has been done before, and with very mixed results. Luckily, this isn’t that.  Helped enormously by the much easier going malt backbone of a brown ale, the brewers showed significant restraint on their adjuncts. While coffee and donut flavors are certainly easily picked out here, the sweetness is dialed back enough to make drinking a can alone feasible. 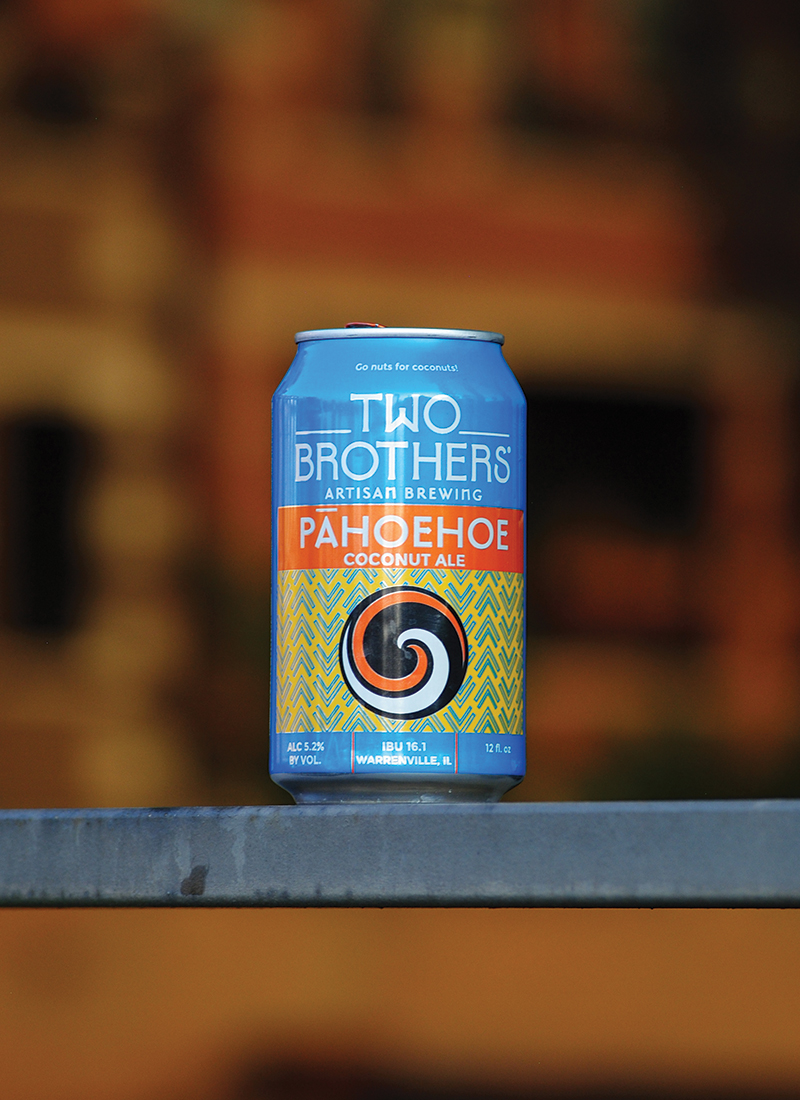 Coconut in beer is typically a polarizing affair. For us at THR, we welcome the iterations of the fruit addition. With Pahoehoe, the sweetness from the coconut is certainly there, but 2018’s version of the beer seems to have the fruit as a less pronounced ingredient, than what we remember from year’s past. And because of that, we were feeling a bit let down, having wanted something more in-your-face-tropical. Still, it makes for a pleasant break from typical golden ales out there. 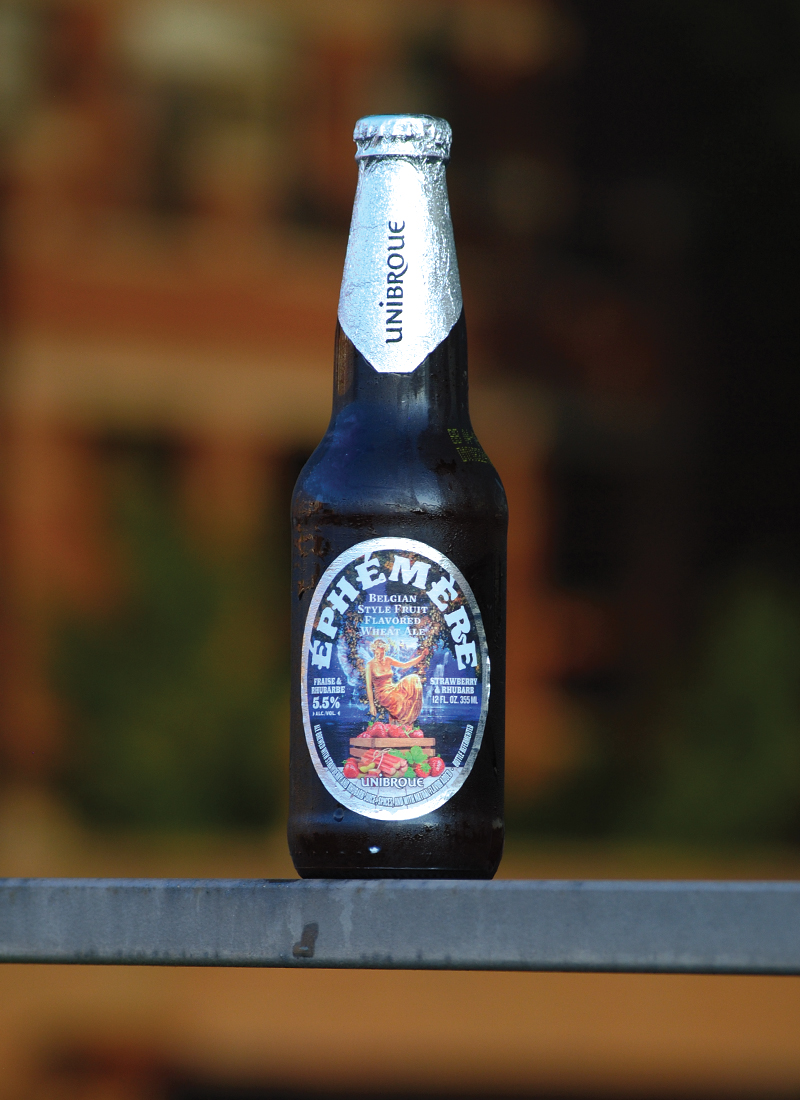 Strawberry-rhubarb could so easily get dismissed as a cloyingly sweet combo, for those typically on the fence. Here, this iteration of Éphémère, was no doubt sweet, but in a light, desserty confection kind of way. On the nose, this reminded us of Gushers candy. It poured a really nice golden-pink with ample head and lacing that dissipated to reveal an equally airy and fluffy beer. There’s a slight tingliness in the finish, but overall it’s a really easy drinker. Strawberry shortcake in a glass.