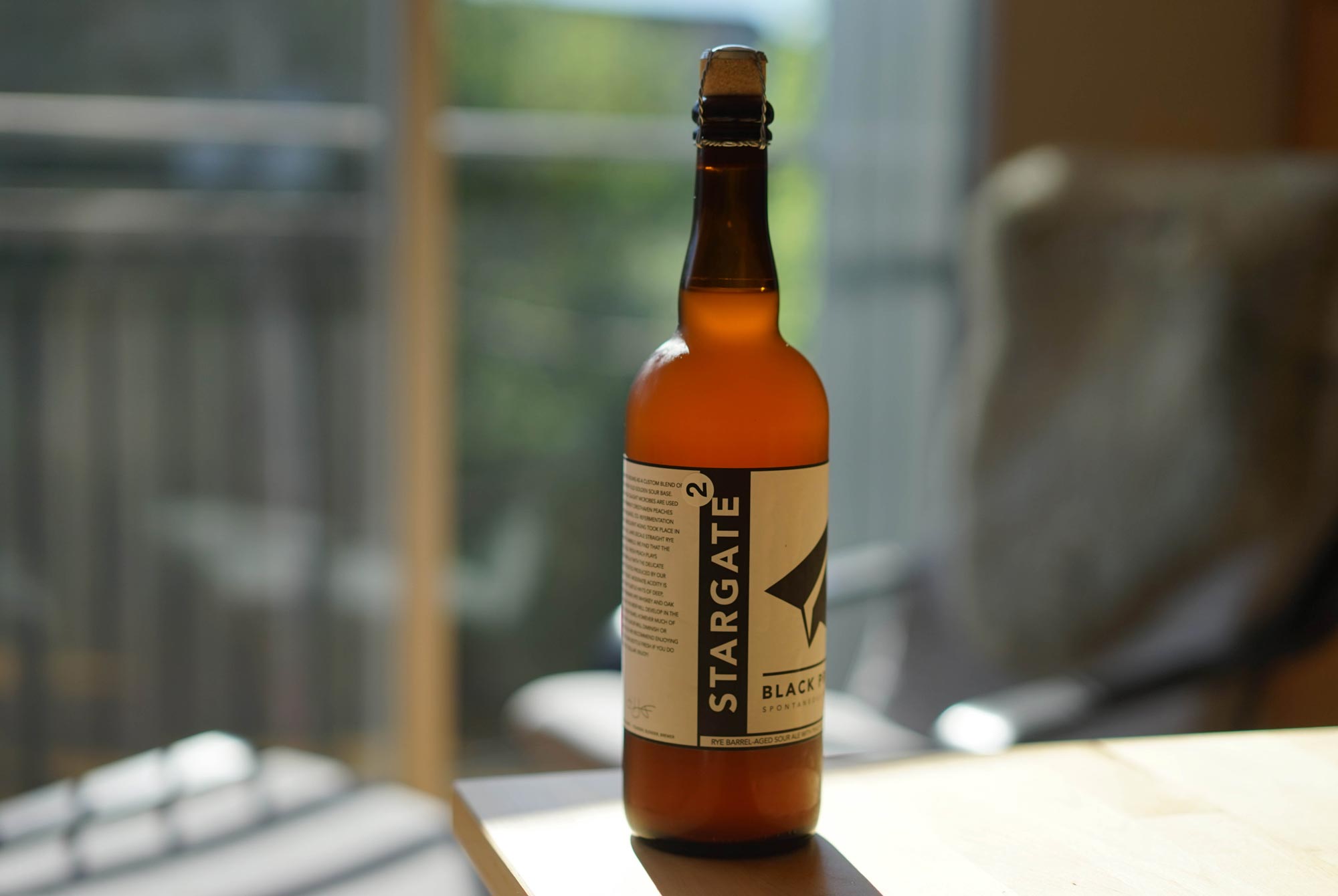 In December of 2016, I flew from Pittsburgh to Black Project Spontaneous & Wild Ales in Denver and waited three hours in the cold for two beers. I passed the time by stomping my feet, thinking of hot tubs, and comparing beer trophies with my fellow line-goers. When the doors opened, I shuffled forward with quiet glee, ready to claim my prizes.

The first beer, Oxcart, was a marvel of modern beermaking, a testament to everything that brewers have learned about flavor and fermentation over the last several thousand years. It’s a blend of 1, 2, and 3 year old spontaneously-fermented beer, all aged in neutral oak. To invoke spontaneously fermentation, brewers don’t add microbes, but let wild microbes settle on the beer as it cools in an open-air container. “Oxcart is the purest expression of our goals with Black Project, and is a beer so complex it is difficult to describe,” wrote James and Sarah Howat on their brewery’s website.

The second, Stargate, a rye barrel aged sour fermented over peaches, was perhaps less lofty, but expected to be just as delicious. Unfortunately, I didn’t find out. As soon as Sarah popped the cork on the first bottle, it erupted like a geyser and struck the ceiling 15 feet overhead.

In the moments that followed, everyone had the same reaction. We gasped in awe, reveled in the explosion, then sunk to disappointment. What was wrong?

Days prior, owners James and Sarah Howat had tested bottles from a single case, but they hadn’t picked from across the entire bottling run. The ones they pulled? Perfect. But on others, the carbonation was way off.

The most renowned Belgian producers of sour beer don’t filter their product, and neither does Black Project, so thick bits of peach ended up inside some of the bottles. In simple terms, fermentation results from yeast eating sugar and producing alcohol and carbon dioxide, and the peaches provide a ton of sugar. In bottles with particularly large peach bits, the hungry yeast went to work creating excess carbonation.

So Stargate couldn’t be released. “Highly over carbonated bottles are dangerous,” Sarah said. “They could explode.”

Without another choice, I quietly took my bottle of Oxcart and left the brewery, wondering what Stargate might’ve tasted like. Luckily, Black Project planned to make things right in epic fashion.

Release day mistakes aren’t particularly rare. On a Tuesday in 2016, The Lost Abbey opened an online sale for their famous Duck Duck Gooze, accidentally selling more bottles than they had in inventory. In the end, Adam Martinez—Lost Abbey’s Director of Media and Marketing—refunded everyone’s money and took to the company blog to issue an apology: “If you want a villain, I’m your guy,” he said. This is the second piece in a series about Black Project. To read the first, click the link below.

Perhaps most famously, in January of 2015, Chicago’s Goose Island announced that they detected off-flavors in their Bourbon County Brand (BCB) Coffee Stout and BCB Barleywine, the result of an infection from a bacteria called Lactobacillus acetotolerans. They quickly offered refunds; some 40,000 bottles had to be returned. Later in the year, they offered a similar refund for bottles from nine different runs of their BCB Stout and one of their Proprietor’s BCB Stout.

Throughout the industry, the monetary return and public apology has become something of a panacea for botched projects. But is it adequate? “Took time off work to do this, thanks a ton,” wrote one unhappy customer on Twitter after Lost Abbey’s 2015 screw up with Duck Duck Gooze. On Black Friday 2015, my brother and I woke up at 5 a.m. to stand outside a Total Wine in Orlando, Florida and buy the BCB Coffee Stout. The store didn’t open until 8 a.m. Across the country, tens of thousands of craft beer fans did the same. Sure, we got our money back from the infected bottles, but didn’t our time mean something as well?

Growing up, my family had an expectation that you needed to leave things in better condition than when you found them. If you saw a cereal box left open, you closed it. Mud in the hallway? Wipe it up. Mistakes happened, and were immediately forgiven — as long as you took responsibility and left the situation better than it was. High standards, to be sure, but my parents ran a children’s summer camp. Left unchecked, oversights could snowball.

Black Project recognized this. Instead of simply refunding everyone’s money, they asked the community to wait while they diagnosed and fixed the problem. Then they committed to giving each fan something even bolder and more rare than their original offering.

Then they committed to giving each fan something even bolder and more rare than their original offering.

According to Sarah, the brewers heard a story about the beer blender Pierre Tilquin, founder of Belgium’s Gueuzerie Tilquin. In 2012, a batch of Gueuze Tilquin à L’Ancienne became over-carbonated, just like Black Project’s Stargate. Instead of dumping the beer, Tilquin and a bunch of friends opened every single bottle of over-carbonated Gueuze Tilquin à L’Ancienne and poured them back into barrels.

“I had 20,000 over-carbonated bottles that I couldn’t sell,” said Pierre Tilquin over email. “We decided to empty them, and, as the beer was very cloudy, let it clarify and de-saturate progressively. I tasted it and measured it regularly for carbonation, and after 1.5 months, the carbonation was gone, the beer was clarified, and the taste was good (it had taken oak character from the barrels), so I decided to bottle it with a small amount of sugar to get a secondary fermentation in the bottle, and a normal carbonation. After 6 months of bottle conditioning, the beer was delicious, and ready to sell.”

“The beer was really appreciated,” Tilquin added. “It was more tasty, oaky and funky than the normal gueuze.”

At Black Project, James and Sarah emulated Tilquin’s experiment (named Gueuze² because it went twice in barrels and twice in bottles). They opened each bottle and poured each beer back into a fermentor, where it sat until it became flat. Then, like Tilquin, they tried a second time.

“It ended up being perfectly carbonated,” Sarah said. “And we refined our entire way of bottling. We added a small mesh filter to remove any hop or fruit particles from the beer.”

Three months after the botched release, Black Project released a second beer to anyone who’d been waiting in line for the first. In homage to Tilquin, the Howat’s named their beer Stargate².

Whatever the outcome, the fact remains that Black Project committed to rectifying their error by providing their fans with something better.

It took a few extra months, but I actually had the opportunity to try both beers. A friend had sent me one of the few coveted original bottles to escape the brewery, and Sarah Howat herself got me a bottle of Stargate². Regular Stargate poured clear and tasted like white peach juice, with a bit of lemon and funk. Imagine someone handing you a glass and saying, “This is peach wine.” Stargate² was a different beer. It was riper, peachier, and ultimately juicier, like biting into a fuzzy summer peach.

At the Hop Culture offices, the jury was divided. One writer liked Stargate better, while two others preferred Stargate².

Whatever the outcome, the fact remains that Black Project committed to rectifying their error by providing their fans with something better. In a world where most businesses get by with the bare minimum, that type of service stands out.

And now more than ever, service is an important component of the brewery experience. Over 5,000 breweries operate across the United States, with another 2,000 in planning. As with any young and fast-growing industry, mistakes are common. And this level of competition means it’s not enough to have a good product. If you assume that half the breweries in America maintain a basic level of competence, that’s still more than 2,500 direct competitors in your market. Quality is only one of many differentiating factors.

Is it unfair to ask The Lost Abbey or Goose Island for a little something extra? Perhaps. Everyone makes mistakes. But those companies shouldn’t fuss when upstarts like Black Project steal their lunch.