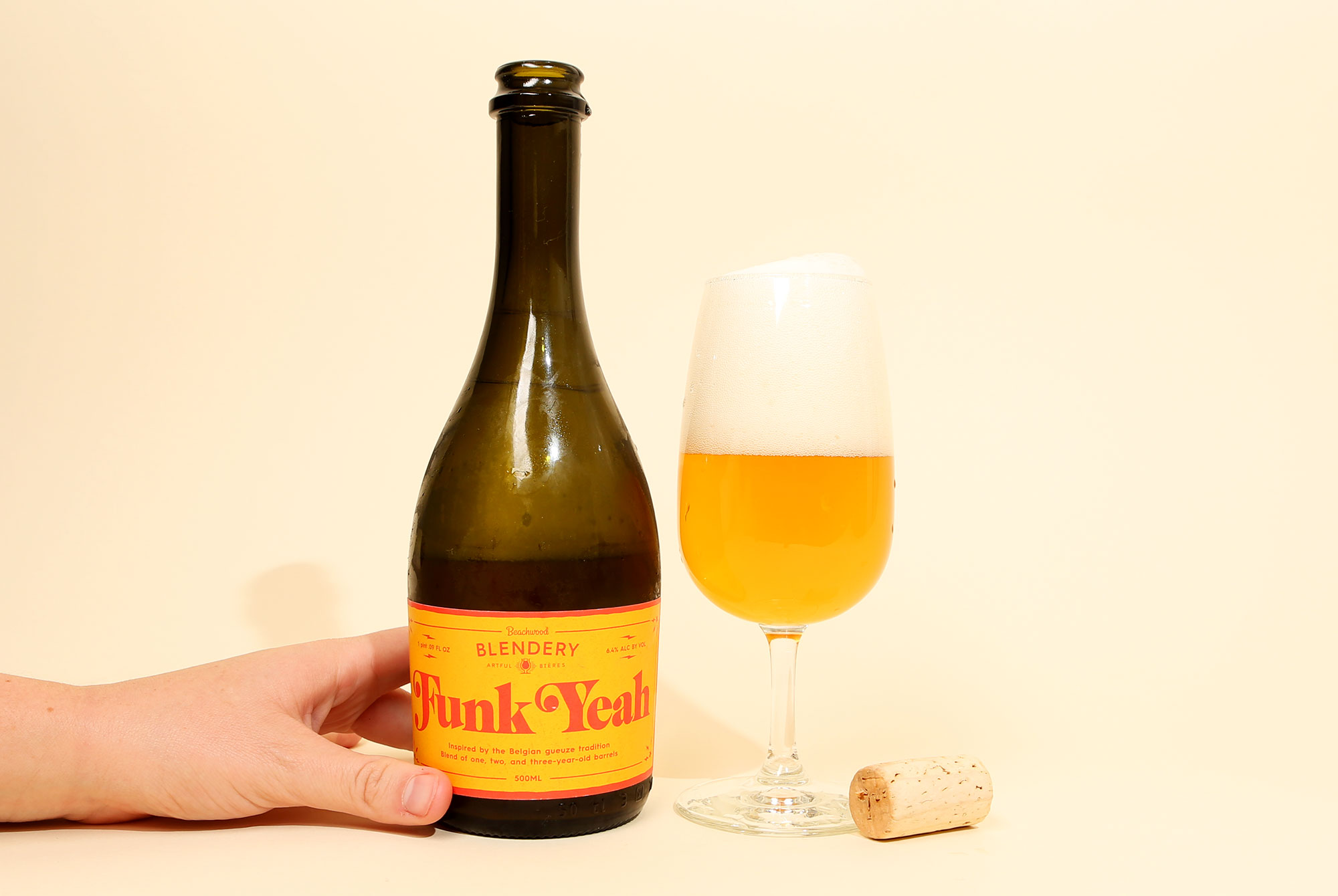 “From the Cellar” is an editorial project that publishes every other Friday with a beer from Hop Culture’s cellar. Have a vintage bottle or cellared beer you think we should try? Drop us a line at [email protected] with the subject line “From the Cellar.”

Funk Yeah at a glance:

Beer mail comes in a variety of forms. Sometimes, we get a box that’s been carefully packed with a bottle or two, or maybe a 4-pack of cans. Often, there’s a nice little note attached. Other times, we get a mess of cans thrown in a box. However it gets to us, we love and appreciate beer mail of all shapes and sizes.

I distinctly remember the Funk Yeah shipment from Beachwood Blendery. Unlike most breweries, there was fascinating and informational literature that described the history and focus of the beer, as well as Beachwood’s former Head Brewer and Blender Ryan Fields’ processes. The packaging itself was lovely: a traditional Belgian-style bottle with a bright, eye-catching, modern label. We put the bottle aside to see what age might do. While we waited, the accolades poured in. Funk Yeah earned a gold medal at GABF in the “Belgian-Style Lambic or Sour Ale” category. Our friends at VinePair named it their #3 beer of 2018 and self-proclaimed “old-man drinker” Aaron Goldfarb included it in his roundup of the 15 best beers of 2018 for Punch. As current Head Brewer and Blender Harrison McCabe shared with us, “The recognition for a beer we spent a few years working really hard on and were proud of — it definitely felt nice.”

The making of the beer itself was a long process that began with the launch of the brewery. “It started as our quest to figure out and understand sour beer and specifically gueuze,” explained McCabe. “We began four years ago working out how to create an accurate representation of this style of beer by working through all the variables: Water, malt, aged hops, mash processes, temperatures, humidity, cultures, spontaneous fermentation, and time. From all of that came Funk Yeah which is our first blend of gueuze-inspired beer and the entire point of the project, which is to make gueuze-inspired beer.” The designation of “gueuze-inspired” is important. The tradition of spontaneous fermentation (where wort is left out to be inoculated with native microflora) traces its roots to Belgium, but isn’t tied to geography. Guezue is a type of spontaneously fermented beer, but the name specifically refers to beer brewed in the Senne Valley.

“As we were trying to make beer that tastes like the gueuze beers from Belgium, we definitely struggled with what to do about both aptly describing our beer as well as respecting the Belgian lambic and gueuze tradition. We settled on Belgian-Style Sour Ale as the style on the bottles and refer to our beer as lambic-inspired or gueuze-inspired, never calling it lambic or gueuze and making sure we are insistent to others about it and correcting them politely. The style ‘American Gueuze’ should never exist out of respect for the Belgian tradition.”

Although not nearly as hyped as hazy IPAs and pastry stouts, spontaneously fermented beer has certainly seen a growth in popularity — or at least more attention has been given to the process. Funk Yeah’s reception suggests that there might be a passion for fermentation.

“The excitement over the release of the beer was pretty awesome,” McCabe said. Since then, there have been several fruited version of Funk Yeah released.

“It’s pretty crazy and awesome,” McCabe said. “It’s not a common practice but it makes for some really amazing blends and a beer that has many levels of complexity.”

McCabe confirmed Beachwood will continue releasing Funk Yeah yearly, with improvements and tweaks along the way.

“I think we did a pretty good job with the blend but certainly learned a few things about some of the different challenges in blending a 1-, 2-, and 3-year beer and specifically building acid profiles and texture,” he shared. “It’s been a fairly long journey to make Funk Yeah and this beer will always be a reminder of that. Funk Yeah was a point where we felt that we were going in the right direction and what we were doing was achieving our goals of what our beer was supposed to be. We are super proud of the beer but always want to do it better the next time.” Funk Yeah was a stellar recreation of a traditional lambic and demonstrates the care and consideration the brewing and blending team. It also shows the growing interest in complex and quality beers that require intentionality on the production end. If you happened to get your hands on a bottle and can store it properly, this beer should continue to grow in depth over the years.

“I’m finding every time I open one that I have a completely unique experience and am pleasantly surprised where the beer is at in that point in time,” McCabe shared. “The beer will hold up for many years, so open it when you think you might enjoy it the most.”

Open it for a backyard BBQ — McCabe recommended pairing with oysters, so go for a seafood spread — or save it for an extra-special occasion. Whatever the setting, you’re in for an exquisite beer.

Currently Drinking: Saison Dupont
John A. Paradiso is the former managing editor at Hop Culture Magazine and current managing editor at Cool Material. His interests include listening to the tunes of King Gizzard and the Lizard Wizzard and watching Wes Anderson films. His Wednesdays are spent picking up comics at the local comic book shop and his weekends are spent watching Premier League soccer. He's probably down to get a beer later.
@paradiseohh
From the Cellar: Bottle Logic x Horus Staff of Asir