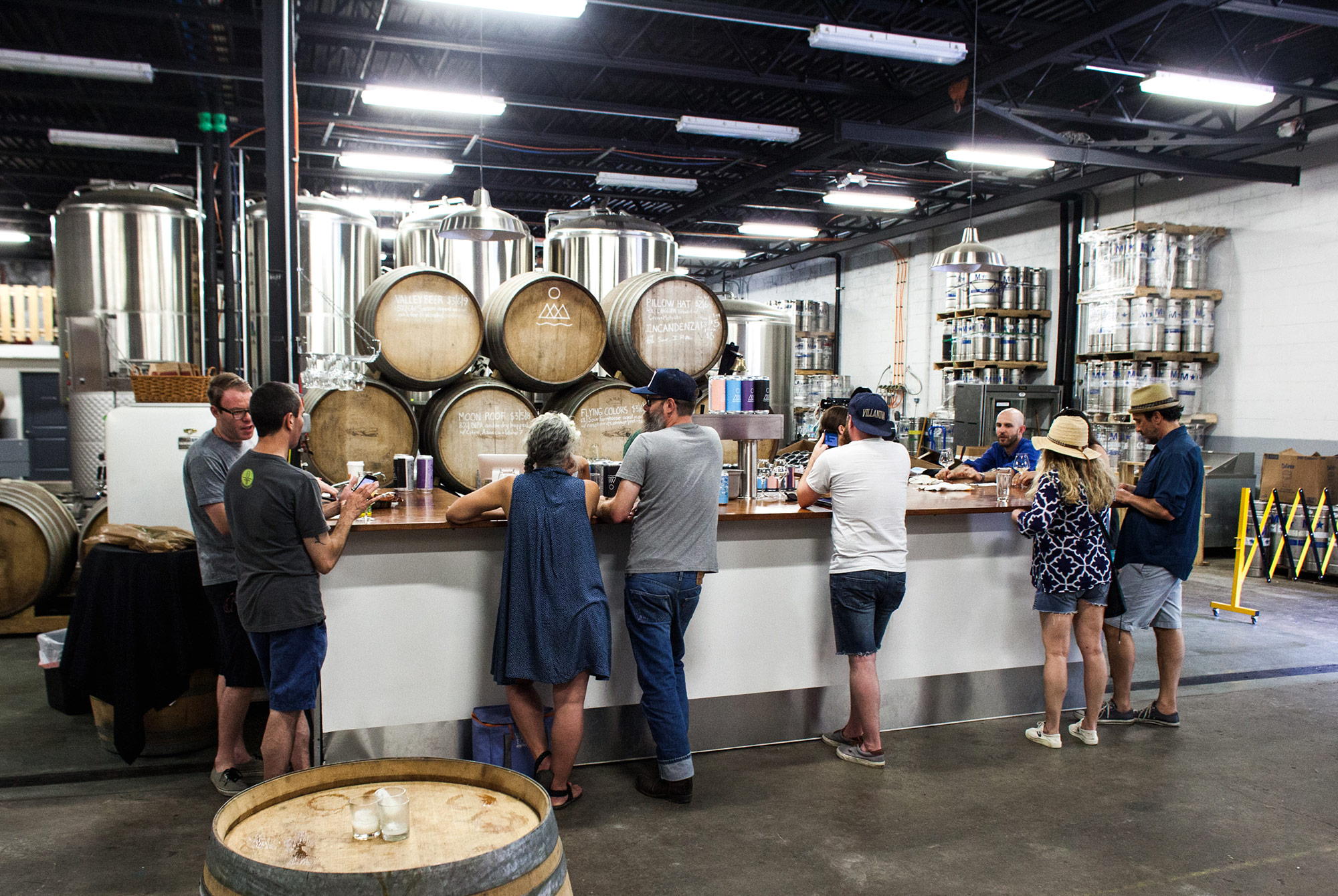 Going to bars in New York City is not a calming experience. Most are noisy, cramped, and dirty. People shout their orders at bartenders. People throw elbows on their way to the bar. But as I walk into Gold Star Beer Counter, co-owner Joshua van Horn is trimming the planters hanging in the windows, where the early afternoon sun is streaming through. Bill Callahan’s folky album Dream River fills the room.

When opening Gold Star about two years ago, Van Horn and his wife, Maria, set the tone of the bar with its design. The curved blond wood feels inviting. The furniture is simple, not boring. The paint is chipped on the far wall and the bricks show their age. The space feels lived in. The most luxurious aspect of the bar is its beer.

On a normal night, Gold Star is lively. Neighborhood regulars stop by to see what new beer is pouring. Out-of-towners want to check out the rare finds on the shelves. Despite the crowd, everyone can have conversations without shouting. There’s no elbowing to get to the bar. You can hear whatever record Josh has put on.

John Paradiso: What kind of music do you guys have?

Joshua van Horn: I mostly like to play rock stuff. It’s a lot from the ’70s and ’80s. More indie styles, though. We don’t do much hip-hop. We’ll play soul. It’s kind of all over the place. We’ve got Bill Callahan on right now. JP: Gold Star feels very homey to me. What went into the design decisions?

JV: We worked closely with an architect who I had known for years. His name is Jeremy Barbour, he’s from a firm called Tacklebox Architecture. His aesthetic is always to focus on what’s essential in a space, like where the tables are going. It was more important to show this warm curve of wood than focus on what covers it. Also, my wife teaches at FIT in accessory design and is very aesthetically oriented. She had a lot of input and helped shape what we thought the space would look like. It was a very natural, collaborative process.

Something goes every day. And that’s what drives me. I want you to come in tomorrow and be able to say, “Oh that’s new!”

JP: What’s the typical crowd in here? Does it fit the vibe of the space?

JV: It depends on time of day or day of the week. We have a really big neighborhood crowd. So we get a lot of families or people coming early with their kids. It’s generally not the youngest crowd in the world, people in their 30s.

JP: Do they mimic the laidback style of the space? Does a normal Friday or Saturday night feel casual and mellow?

JV: Definitely. It’ll get crazy when we do events. For the most part we won’t play hyper music. We’ll play mellow stuff. I’d like to think, on a normal night, even if it’s packed you can still have a conversation. And we do get very busy. But it’s never loud enough that we can’t have a conversation at this volume. And we decided not to get the biggest stereo system in the world on purpose. Those thoughts were put into it.

JP: How did the decision play out to open as both a bar and bottle shop?

JP: Why did you decide to only do beer?

JV: I started in beer in Chicago. I worked at a beer bar, and my idea when moving to New York was to just continue with beer. And the beer scene in New York at that point was far behind, definitely behind Chicago. And when I got here I couldn’t find a job in beer. I worked at restaurants with really great wine and really great cocktail programs. And I learned a lot about curation.

JP: What were some of those lessons?

Usually when you come in here there’s going to be a cider for non-beer drinkers, a lager or two, a couple saisons or farmhouses, generally four sours, about five hoppy things, and then a couple dark things.

JV: Working in wine, especially making wine lists, helped me figure out how to decide what kind of identity you’re going to have in the area where you’re working.

JP: What are the specifics of organizing and curating a beer list?

JV: We try to cover our bases, first. So usually when you come in here there’s going to be a cider for non-beer drinkers, a lager or two, a couple saisons or farmhouses, generally four sours, about five hoppy things, and then a couple dark things. And then seasonally it’ll shift. So coming up in the winter there’ll be more dark things. I like to have nods to things that are local and nods to classic styles, like if I can pick up a German lager I will.

JV: We have some other beer bars that are close to us and are walkable but they’re not necessarily in our neighborhood. And so I thought that if Prospect Heights can support five places that do craft cocktails, it can have one place that is focused on beer. And have an adventurous, exciting list. I think that each neighborhood should be able to support at least one of these. And there’s still room to grow.

JP: I think that mirrors a lot of the conversation around craft breweries. There’s the potential that you can have a brewery in every neighborhood of a city.

JV: And some cities are like that now. And New York is still on its way. We’ve had breweries that have been here a long time, it just hasn’t been a very big slice.

JP: Do you think New York has hit that pedigree of Chicago or some of those other places?

JV: I think it’s getting there. I think the things coming out of New York are very exciting and our local breweries are in there with what’s happening in beer. I’m really proud of all those guys. It feels good to be in New York in beer right now. And I know for out-of-area breweries, making the choice to start distributing to New York City is really big. New York has tastemakers in what’s currently happening in beer. Like we had Monkish and then they blew up and became big. And we had J. Wakefield and they blew up. And we hardly see these things anymore. JP: Do you ever have beers on that you’re not particularly excited about but maybe you feel like you have to have it on to meet a certain type of drinker?

JV: We don’t get to taste everything before we get it. If a keg’s presented to me I have one chance to take it. So we research it and find out as much as we can, but we only have one chance. So do all of them turn out successful? No. But we can usually find merit for reasons why you picked it. I like to think that I can understand why I picked something. Even if it didn’t end up being what I expected. I try not to consider price when I’m buying. If it’s worth it for me to have it then I’ll take it.

JV: We are 900 sq. ft. and we go through a lot of beer for 16 lines. Sometimes you have a beer that you like and you believe in, but it’s not a style that’s going to go really quickly. I don’t know what that beer would do on a list of 40. It’d just never get poured. I like how many we have. It’s easy to change it. Something goes every day. And that’s what drives me. I want you to come in tomorrow and be able to say, “Oh that’s new!”