The next time you open a good beer, take a moment to acknowledge that your enjoyment results from a laborious process. Grain is tricked into sprouting, scorched in a kiln, crushed, and boiled in a big copper kettle. Oversimplification aside, the brewing method sounds uncomfortably close to how witches prepare children for dinner, and that’s discounting the extra steps required when using adjuncts, like, say, citrus fruit. Cutting, peeling, zesting, and squeezing are all tiring chores for mortal humans who don’t have five grand to blow on a Zumex juice extractor. Put in that elbow grease prepping sinensis and reticulata, and you’ll end up with sore hands stinging with citric acid. So all hail Jester King for turning that extra tedium into an S-tier beer: Provenance Blood Orange and Tangerine.

What Is Jester King Brewery?

Jester King is a brewery, farm, and restaurant settled on 165 acres in the Texas Hill Country, about a half-hour west of Austin.

The brewery identifies as a “farmhouse brewery” focused on mixed culture and spontaneous fermentation beers. They emphasize locality in their beers and draw inspiration from the surrounding region.

Jester King co-founder Jeffrey Stuffings dreamed up the brewery in 2007; it has been in operation since 2010. A couple of years later, he and his team dedicated themselves to producing mixed culture and spontaneous culture beer. However, as of 2020, they’re making pure culture beers, too.

Think of Jester King as a cousin to a brewery like Oxbow Brewing, with bonuses: A functional kitchen; an expansive outdoor space easily enjoyed all-year-round because it’s Texas, not Maine; and proximity to human civilization.

A cursory glance at Jester King’s portfolio reveals a healthy list of IPAs and pale ales, but they’re known best for their sours, saisons, and farmhouse ales. Each is brewed in the Belgian tradition, taking full advantage of techniques like barrel-aging and spontaneous fermentation to honor a time and place.

Given that IPA is still king in the craft beer market, the steady commitment to beers other than hop bombs is admirable, and the results speak for themselves. Jester King beers are some of the most in-demand in the country.

Every brewery has a lane. Jester King’s road is more like a highway. The brewery spends a lot of time refining their craft and getting better with every bottle they brew. Of course, it helps that the brewery decorates these bottles with gorgeous artwork from artists like Josh Cockrell and Katie Ross. They also have clever, tongue-in-cheek labels telling stories about the beers within.

The stories themselves don’t always paint pretty pictures, though.

“Squeeze them, crush them, pulverize their skins,” reads the tag on Provenance Blood Orange & Tangerine. Barbaric, yes, but if you’re pouring this particular beer, you’re probably not complaining.

Provenance Blood Orange & Tangerine is the kind of brew that gives us reason to appreciate Jester King. Imagine the time and sweat taken to hand-juice nearly 1,000 pounds of blood oranges and tangerines, much less use that juice in a beer. Jester King has done a phenomenal job highlighting the fruits by complimenting them with the perfect hop bill.

Although “comfort beers” are typically stouts, Provenance Blood Orange & Tangerine is comforting, too. The beer delivers crisp, acidic citrus tang alongside bright, tropical notes from Ekuanot and Sabro hops. There’s also a bit of flowery delicacy from the Loral hops, too. But beneath these more prominent characteristics rest delicate, toasted malts that enhance the inherently bready quality of the farmhouse style.

Provenance Blood Orange & Tangerine delivers comfort through familiarity. You’ve had these ingredients before but rarely synchronized this well. The package they come in, the aromatic, palette-tickling funk that’s key to farmhouse ales, plays well against each component and gives them a rustic backdrop. There’s refinement in Provenance Blood Orange & Tangerine’s hay bale sensations. Of course, calling a beer “refined” sounds ridiculous when the beer smells of scattered straw and open pastures, but this is precisely what the style is supposed to taste like.

From the bottle to the brew itself, this is a beautiful product. In the glass, it presents as a pale orange that promises juice and meets that promise with every sip.

Where To Buy Jester King’s Beer

If you can’t make the drive, you can have their beer shipped to you via HopDrop (if you’re within 1,600 square miles around Houston), or via Tavour, depending on which state you live in. And if you live in Washington State, Fair Isle Brewing will ship Jester King’s beers right to you.

Currently Drinking: Trillium Brewing Double Dry Hopped Sleeper Street
Boston-based culture writer Andy Crump writes about film, television, beer, and music for too many outlets to list. You can follow him on Twitter and find his collected writing at his personal blog. He is composed of roughly 65% craft beer.
@agracru
A Pint with Jeffrey Stuffings, Founder of Jester King 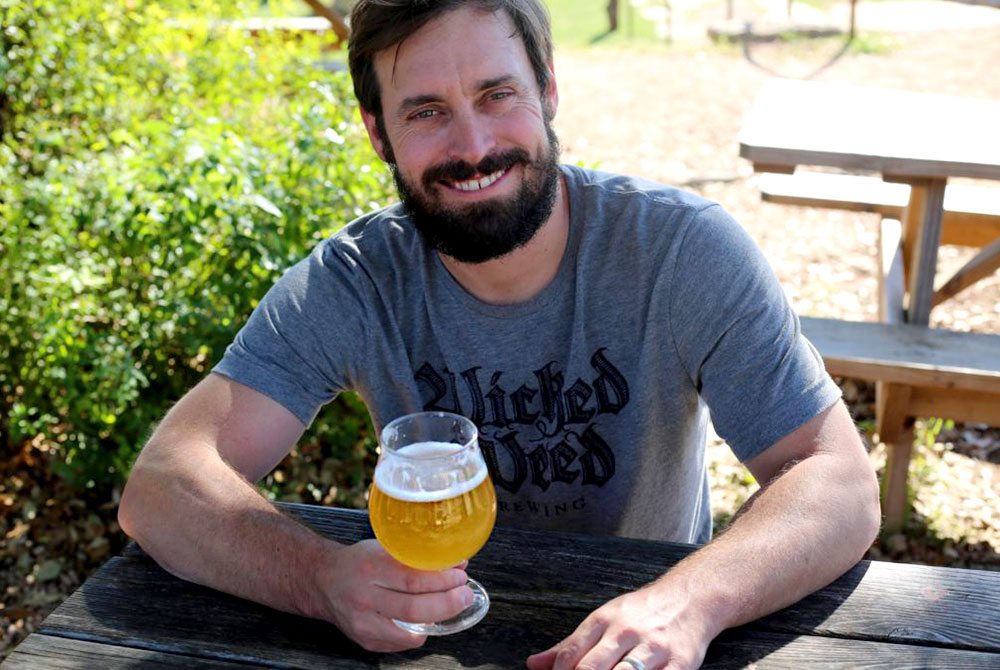