What Is a Vienna Lager? The Vienna lager isn’t your perennial tap list darling. In fact, this copper-hued and malt-forward brew is a fairly rare find.

Partly because it’s a more challenging beer to produce — it takes longer to ferment and there’s really nowhere for off-flavors to hide. And often, even if a beer is technically classified as a Vienna lager, breweries often opt to call it by another name for marketing reasons. For example, an Oktoberfest, an amber, or in the case of Sam Adams, a Boston lager.

Quite simply: The average drinker just doesn’t know the definition of a Vienna lager. Therefore, people are less likely to order one.

Though seemingly subdued, Vienna lagers have a history as complex and mysterious as their flavor profile. We’ll tell you why you shouldn’t sleep on this obscure style. Plus a few of our favorites to try.

A Brief History of Vienna Lagers

We have a little bit of brewery espionage to thank for the invention of the Vienna lager.

As the story goes, sometime around the 1820s and 30s, Anton Dreher, Owner of Brauhaus zu Klein-Schwechat in Austria, along with his buddy and fellow brewer, Gabriel Sedlmayr, went on a beer tour of Europe. They made stops at breweries across the continent, but spent most of their time in Britain, sampling the suds and working as they went.

“As lagers were getting started, everybody was looking at Britain. At the time, British brewing technology was on fire.” said Jason Ranck, Neshaminy Creek Brewing Head Brewer, who won medals in the Vienna Lager category at the Great American Beer Festival (GABF) in 2013 and 2016.

“The story is that they would go to these breweries with a hollowed out cane that they’d steal samples with, so they could bring them back to Germany to study [at the brewery Sedlmayr’s family worked at (Spaten)],” says Ranck.

Beyond stealing wort, the duo learned how to use technology that hadn’t yet made it’s way to Central Europe. Techniques such as chilling hot wort to bring it quickly to yeast-pitching temperatures and understanding how to better sanitize equipment.

The Rise of the Vienna Lager

In 1841 Dreher released the bottom-fermented “Klein-Schwechater Lagerbier” which would soon be called Vienna Lager. It was an immediate hit and something that earned him the title “the beer king.”

People loved Dreher’s Vienna Lager because it was comparatively light-colored to other beers at the time.

Additionally, clear glassware had become cheaper to produce (as opposed to stone or wooden drinking vessels). All of a sudden drinkers could see their beer, meaning Dreher could show off the stunning color of his Vienna lager.

For a while, this style enjoyed high levels of popularity. But as brewing techniques continued to evolve and brewers created even more styles, Vienna lagers lost the limelight.

How Do Brewers Define Vienna Lagers?

According to the Brewers Association, a true-to-style Vienna lager should be copper to reddish-brown in color and clear in clarity. These are medium-bodied beers with low hop aroma and bitterness, characterized by a malty aroma and light malt sweetness.

Vienna lagers should be primarily driven by malt.

“So much of the flavor profile will be driven by malt choices,” says Chris Swersey, the Brewers Association Competition Director. “Generally, they’ll be biscuit and toast notes, maybe a tiny floral or spice whiff, but very low ester on the nose. It’ll be crisp and clean, with a dry finish.”

To Ranck a top-tier Vienna will have a balance of bread crust and subtle nutty flavors, with just a bit of honey. It’ll also be highly sessionable.

Because these beers can go out of balance so quickly and there’s nowhere for flavor distractors to hide, Vienna lagers can be a tough style to brew. And potentially why some brewers avoid them.

“There are certain beer styles that are extraordinarily difficult for craft brewers to emulate, at least in the classic style,” said Swersey. “If you’re going to brew something like a Vienna lager and call it that, you have to come pretty close to a well defined flavor mark.”

Swersey adds that some of the best Vienna lagers he has sampled were made by brewers who went above and beyond to source true-to-type ingredients (think Vienna malt, German Noble hops, and Vienna Lager yeast) and who purchased equipment that allow them to lager well.

“In the last 20 years, I’ve probably tasted a dozen that are right on target,” Swersey said. “It’s a tough style for U.S. brewers to crack the code on.”

It’s also a beer that runs counter to the tide. The craft beer river, especially in recent years, has been driven by hops. But for this style, malt is so much more important.

Still, Ranck doesn’t expect the style to ever go away.

Here Are Some Good Vienna Lagers to Try

Neshaminy Creek’s award-winning (2013 and 2016 at GABF) Vienna lager is refreshing and clean. They use Munich and Vienna malts for lovely caramel notes that play nice with the German Tettnanger noble hops. It’s certainly one you’ll want more than one of.

Shane Center Vienna Lager — Mountains Walking’s Vienna Lager made our list of the top beers to drink this last summer for good reason. Brewed in collaboration with Shane Center for the Arts in Livingston, MT, this lager is crisp, bright, and well balanced. With 100 percent German malt and 100 percent fresh Czech Saaz Hops, Shane Center is lagered for two months. Expect a malt backbone with a flavor profile consisting of caramel, toffee, and a touch of smokiness.

Vienna — Whether Double Nickel calls their Vienna the “ole standby” because it’s popular or easy-drinking, we’re not sure. But one thing we do know: This beer is a complex crowd-pleaser. In it you’ll find an array of flavor profiles: toffee, caramel, cereal, dark and stone fruit, herbal hops, and perhaps a bit of pecan. Definitely a back-porch sipper.

Volksbier Vienna — Wibby’s Co-Founder and Brewmaster, Ryan Wibby, wants to start a lager revolution. This 2020 GABF gold medal winner is certainly a start. Rich and malty, it’s also the first beer to earn a perfect 100-point beer rating from Wine Enthusiast. “With a luxurious mouthfeel that slowly brings on layers of nuts, warmed caramel and a subtle spiciness from noble hops, this Vienna lager is of remarkable quality,” wrote the magazine. “Often beers in this category are too sweet, but here the recipe brings bitterness into the equation for balance. Still, it finishes dry, with only a touch of light brown sugar on the finish.”

Vienna Lager — Calling upon four malts and two hops, this beer from Devils Backbone balances sweet, bready malts with just a bit of bitterness. You definitely could (and will want to) drink more than one. The brand primarily focuses on lagers, so it makes sense that they’re willing to put in the time and work to make this Vienna lager just right.

Bailey Berg is a Colorado-based (by way of Alaska) freelance writer who covers craft beer, travel, and the outdoors. Her work can be found in The New York Times, The Washington Post, National Geographic, Conde Nast Traveler, Men's Journal, Architectural Digest, and beyond. You can connect with her on Twitter and Instagram.
@baileybergs
@byebaileyberg
The 20 Best Beers to Drink in Fall 2021 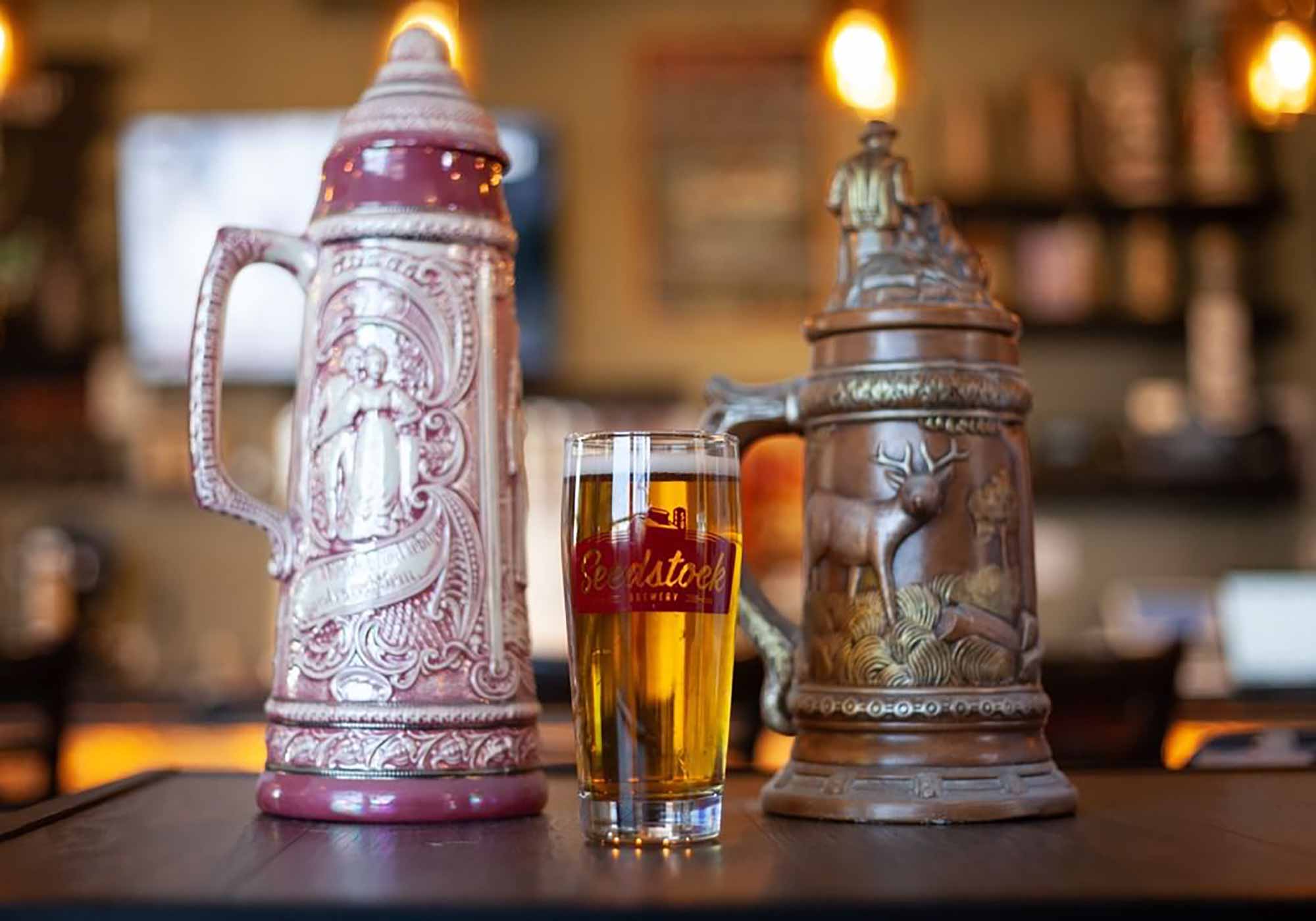