In a few weeks, we’ll be bringing our Juicy Brews festival to Richmond, Virginia, with Juicy Brews Summer Invitational. We’re reconnecting with our friends in the area like Burley Oak, Ocelot, and Aslin and inviting some Juicy Brews first timers like Brewery Bhavana, Charles Towne Fermentory, and Resident Culture Brewing Company.

Southern Grist Brewing is part of the nascent craft beer scene developing in Nashville, TN. The city, known for its incredible music and whiskey, is also home to quality lagers, juicy IPAs, and tart sours.

Since opening in early 2016, Southern Grist has expanded to two locations. Co-founder Kenny Gould visited both locations during this past year’s Craft Brewers Conference in Nashville and was blown away by the unique offerings like Contact Hive (an IPA made with El Dorado, Citra, local wildflower honey, tangerine peel, Purple Haze & Tangi terpenes) and the delicious Process Control.

I chatted with Jared Welch, one of the three co-founders of Southern Grist, about his early days as a homebrewer, his thoughts on the hazy IPA, and mini dachshunds.

Jared Welch: I guess you’d say I’m homegrown. I started homebrewing back in 2010 and fell in love with it. Brewing quickly became my top hobby and passion; I was pretty much dedicating 100% of my free time to learning everything I could and brewing as much as possible on weekends. After many years of developing my craft, I had a pipe dream to one day open a brewery (as almost all homebrewers do), but knew how much of a financial burden it was. I wasn’t at a point in my life to take that step.

But about a year later, I was approached by my current business partners, Kevin and Jamie, at our corporate job — they wanted to open a brewery but needed to bring in a brewer. We had all tried each others’ homebrews at various functions, so they knew the type of crazy shit I liked doing (laughs). Roughly 16 months after we sat down and had a real talk about making the leap, we opened our first taproom in Nashville; relatively, that’s pretty damn quick, and we haven’t looked back. JP: Why’d you want to start a brewery?

JW: It all comes down to that old adage: “Do what you love and you’ll never work a day in your life.” I had a couple desk jobs right out of college and just didn’t enjoy them. I knew that if I could spend every day doing something new, being on my feet, creating a product that I loved, that I’d be happy. It sounds very cliché and kinda sappy, but it’s true. I also knew if I was going to go down this path, I had to start my own brewery, not just work at one. If I walked in every day and had to ‘push the pale ale button’ then I’d be just as miserable as I used to be sitting in front of a computer. To me, brewing is fun, and I hope that comes through in our finished product. I want nothing more than for a group of people to get together and drink our beer while having a good time. I want it to bring folks together.

JW: Ha, probably too many. Coming from a homebrewing background, there was a lot to learn making that jump to the professional side and I’m not too proud to admit I’ve done some really dumb shit. As far my most horrific brew day, my brother and father were visiting and we wanted to do something crazy, so we added a stupid amount of brownie mix and cookie dough to the boil on an imperial stout. We did irreparable damage! I spent countless hours trying to scrub the scorched chocolate from the bottom of the kettle — down the drain it went. I want to mess with the idea of a cookie/brownie stout again, but next time I’ll be a little more methodical about the approach.

JW: This is a loaded question and my stance probably changes by the day. I don’t know, man… I mean, I’ll start by saying I love to make and drink them — when they’re good! That said, there are a lot of not good ones out there. I fear it has become this movement where brewers are seeing just how “turbid” they can make it, or pushing the boundaries on adding trillions of pounds of hops per barrel, just to say they did. I’d rather brew a stellar “hazy” IPA and if it ends up being hazier than most, obviously consumers are going to love that, so great. But brewing the beer just to be hazy is a slippery slope, because at the end of the day, the less light that gets through the glass, the more people are generally going to like it, sadly.

I like good beer, and fortunately ‘good’ is a subjective term. The amount of beer purists that talk trash on hazy IPAs because they aren’t up to some style guidelines they follow, or whatever, really cracks me up. Let’s all just make something that tastes good and doesn’t have any objective off-flavors.

Related Reads
People
The 23 People to Watch in Craft Beer in 2023
People
7 Tips from the Professionals on How to Homebrew
People
How Amy Cartwright Built Independence Brewing Co. into One of the Largest Breweries in Texas
JW: My favorite ‘off the shelf’ and readily available beer is (and likely always will be) Columbus IPA. Growing up in Ohio, I drank a ridiculous amount of that beer and it’s always stunning to me how available, fresh, good, and affordable it is. Every time my family visits, they basically bring it to me by the case. JW: Without getting all personal and emotional, I’d say to get into craft beer and start homebrewing. (Laughs) I like where that has taken me.

JW: Mini dachshunds. They’re the best and mine is the best of the best.

Currently Drinking: Saison Dupont
John A. Paradiso is the former managing editor at Hop Culture Magazine and current managing editor at Cool Material. His interests include listening to the tunes of King Gizzard and the Lizard Wizzard and watching Wes Anderson films. His Wednesdays are spent picking up comics at the local comic book shop and his weekends are spent watching Premier League soccer. He's probably down to get a beer later.
@paradiseohh
6 Questions with Parker Olen of Mast Landing Brewing Co. 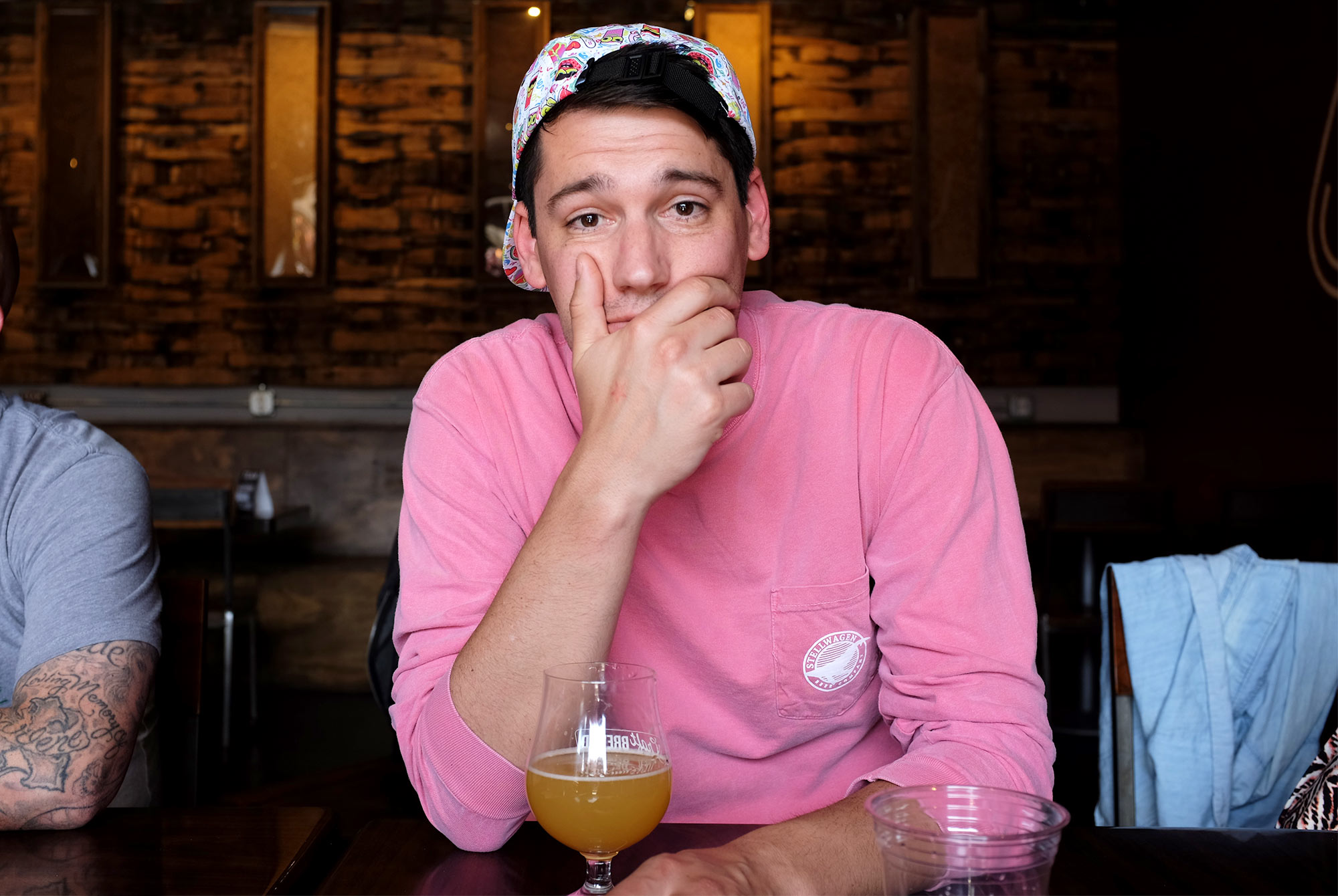