The Perfect Beers for Every Type of Cocktail Lover In my time as a bartender, I’ve watched plenty of regulars fall into a “bar rut.” There’s a certain comfort to ordering the same thing at each trip to the bar, in knowing that your gin and tonic will taste more or less like every G&T that came before. And with tap lists expanding and crafty brewers reviving obscure beer styles, the once simple task of ordering a pint can feel daunting.

We’re here to help. If you’re bored of the same old thing or tired of forking over 13 bucks for a specialty cocktail, why not look to the increasingly diverse world of beer? We’ve put together this handy guide specifically for cocktail drinkers, meant to help you wade confidently into the wide ocean of craft beer. If you can’t get enough of the classic Italian aperitif, then you probably don’t shy away from bitter flavors. And no beer does bitter better than a West Coast-style IPA. Though there is no “official” definition, West Coast IPAs tend to be big and bold, with a palate-wrecking bitterness that results from generous heaps of hops. Many also boast piney and citrusy notes—flavors that will be welcome to every seasoned Negroni drinker.

Your Usual Order: A French 75 Next time, try: A Saison

The classic French 75 is an effervescent beauty that bursts with gin botanicals and lemon. For a beer that mimics all that and more, reach for a saison. Often referred to as farmhouse ales, the Belgian-style beers are marked by distinctive lemon and pepper notes from the yeast. They are also highly carbonated and usually quite dry, making them a refreshing, easy-drinking substitute for a French 75.

Your Usual Order: A Manhattan Next time, try: An American barleywine

A great Manhattan is all about balance: marrying the sharp sting of whiskey with the sweetness of vermouth. American barleywines have the same goal in mind. More heavily hopped than their English counterparts, American barleywines balance rich malt sweetness with hop bitterness, creating a complex beer built for sipping. And like Manhattans, barleywines are boozy (often clocking in over 10% ABV), making them a perfect cold weather drink.

Your Usual Order: A Margarita 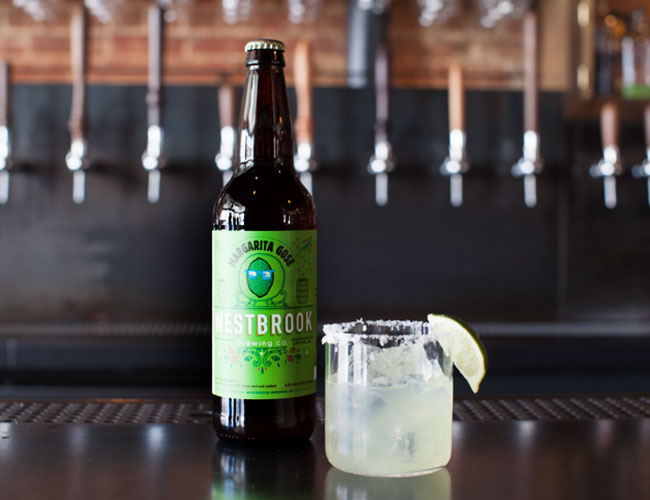 Next time, try: A gose

The combination of acid and salt has long been appreciated in the kitchen, and cocktails like the margarita show that the marriage works just as well in your glass. And beer is no exception. Once a nearly extinct style, gose is making a comeback as brewers rediscover its salty-sour charms. Like a margarita, the German wheat beer is characterized by a tart fruitiness and a hint of salinity. Next time you want to mix up a poolside pitcher of margs, crack open a gose instead.

Your Usual Order: A Penicillin Next time, try: A smoked beer

The Penicillin recently entered the cocktail canon as a modern classic, and one whiff of the peaty scotch-based drink makes it easy to see why. But if you think smoke is relegated to a rocks glass, think again. In fact, smoke was largely unwanted but unavoidable throughout much of brewing history, as malts were often dried over open flames. Today, smoke is an intentional element in a number of beers, from German rauchbiers to Polish grätzers (a smoked wheat beer). In America, smoked malt most often finds its way into darker beers like stouts and porters.

Your Usual Order: A Martini Next time, try: A pilsner

The martini label gets plastered a lot of places it doesn’t belong, from sickly sweet schnapps drinks to “cocktails” that are little more than cold vodka. But a proper martini, one made with a London dry gin and a decent helping of dry vermouth, is a study in simplicity, easy to make but just as easy to get wrong. Like the martini, the pilsner is an enduring classic. But as any brewer will tell you, it’s also a damn tough style to perfect. When done correctly, a pilsner offers a dry, crisp drinking experience accented with herbal, floral and peppery notes. It’s like a martini: though we don’t recommend shaking or stirring.

Your Usual Order: A White Russian Next time, try: A milk stout

With its creamy sweetness and hints of coffee and vanilla, the White Russian has long been a favorite of brunchers and slacker bowlers. Milk stouts hit all the same lovely notes. Milk stouts make use of lactose, an unfermentable sugar that lends the beer some residual sweetness and a creamy mouthfeel. Coffee, chocolate, and vanilla are common tasting notes in darker beers, and are often enhanced with additional ingredients like cacao nibs and vanilla beans. The result is a decadent dessert beer that even the Dude could get behind.

Your Usual Order: A Cosmopolitan Next time, try: A fruit beer

Thanks to Carrie Bradshaw and the gang, the cosmopolitan is widely regarded as the quintessential “girly” drink. Undeserved stereotypes aside, a proper cosmopolitan is actually a delicious and well-balanced drink, (arguably) invented by cocktail legend Dale DeGroff himself. And just like the cosmo, fruit beers are often dismissed by beverage snobs, tossed aside in favor of double IPAs and barrel-aged stouts. But a well-made fruit beer (a catchall term for any beer that derives some of its flavor from fruit) is a thing of beauty, like eating berries and apples fresh from the field. They’re the perfect gateway to the wide world of beer.

We originally published this piece at the Cocktail Enthusiast, but we liked it so much we decided to publish it here as well.