As a growing number of craft beer breweries compete for attention from the drinking public, the first and, in some cases, best place for differentiation is the can itself. On overcrowded shelves a can’s outside has become almost as important as the liquid inside, and when it comes to can artwork, one brewery is oft mentioned above all others: Burial Beer Co. in Asheville, NC.

The man behind Burial’s artwork is David Paul Seymour. Born and raised in Biloxi, Mississippi, Seymour got his start as a teenager designing t-shirts and album covers for his friends’ bands, before heading off to architecture school. Twenty years later, he reentered the world of freelance art, designing album artwork for some of his favorite bands before being discovered by Burial brewer Tim Gormley. We spoke with Seymour about his creative process, how his work has impacted his view of craft beer, and what it’s like to work for one of the hottest breweries south of the Mason Dixon line.

J. Travis Smith: How’d you come to start working for Burial?
David Paul Seymour: Tim, the brewer at Burial, was following my Instagram feed for a while and was really into the artwork I was doing for heavy bands. He really dug it. I guess right about that time those guys at Burial began ramping up to make a move from a taproom to canning and bottling beer. They were looking for someone to create a look from the ground floor.

Tim tagged Burial’s founder in one of the posts and said ‘Hey, this is the guy.’ By the end of that day they reached out to schedule a phone call. Simple as that. 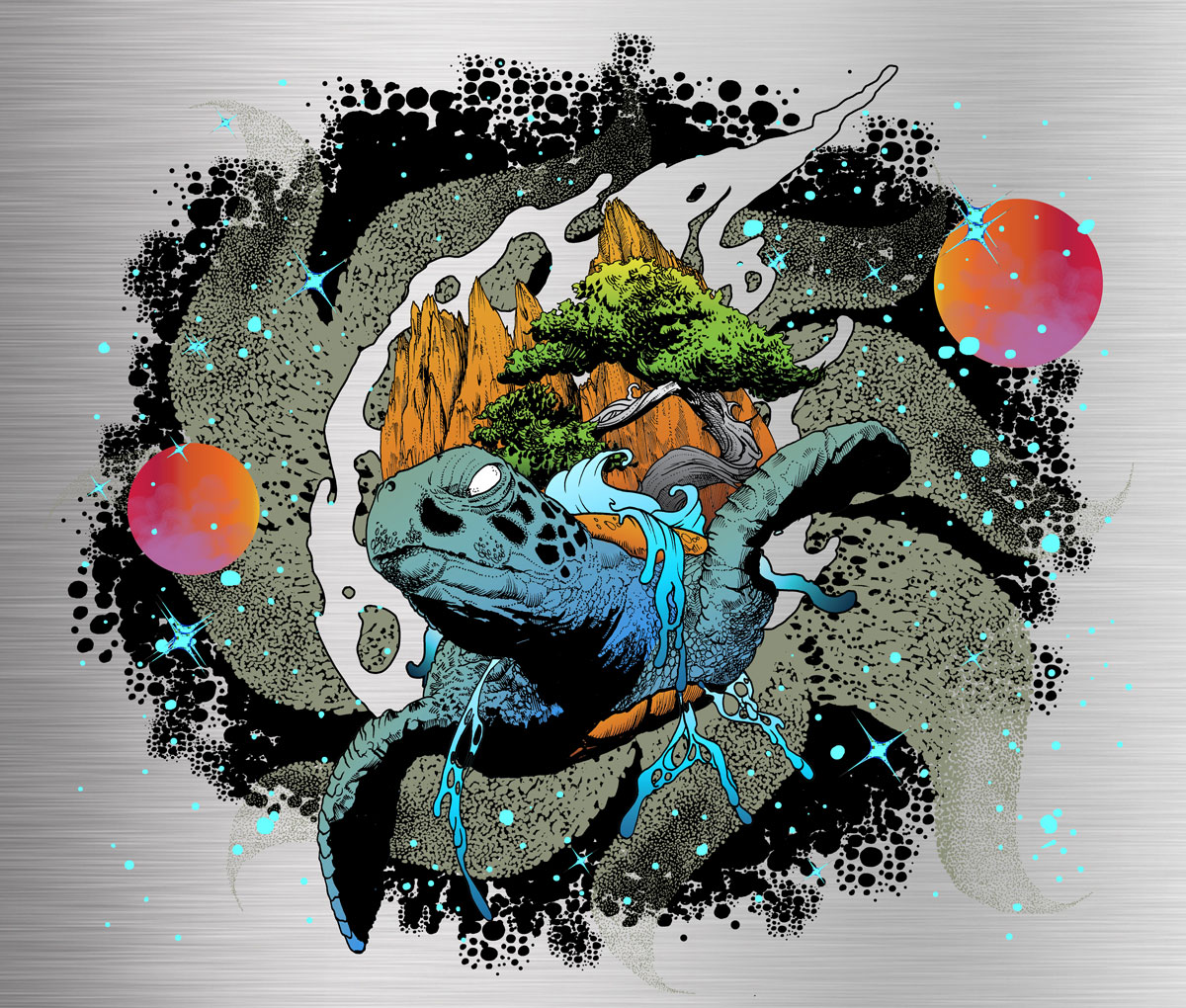 JTS: Your methodology is pretty old school — ink and paper. What’s up with that?

DPS: I say that these are old school techniques at home in a modern world. I know there are a lot of people who work primarily in digital. I’d say my artwork is 20-30 percent digital because the coloring is done digitally. Even stuff that looks like it’s painted has some amount of digital rendering, but all the line work is done by hand.

JTS: What’s the creative process like? Are you trying the beer beforehand?

DPS: The funny thing is that still to this day I don’t get to taste the beer until it’s all said and done. The artwork comes ahead of the canning. So anytime we’re working on something new it originates out of a concept before there’s any tasting.

On Monday or Tuesday I’ll get a written brief from those guys saying here’s the name of beer, here’s Doug’s [a founder of Burial] verbiage — in and of itself his writing is artwork, the guy is a poet. One week it may be ‘Hey we don’t really have a clue what you should do,’ or it could be ‘Hey we have a reference nugget of an idea.’ Or occasionally, for the big bottle releases, ‘Hey we are referencing some medieval or renaissance painting in Italy.’ However the beginnings germinate, it becomes a collaboration after that.

I take that data, loose or defined, and then I interpret it with my vision. I could have a wolf wearing human clothing leaning against a tree. It could be something specific or loose and spacey. I take that and run with it. I sketch a first draft with pencils and paper and they all collect their feedback. It’s a committee process. They pass it back and then I tweak it and boom we are off to the next piece. For artistic as it is — one person over there has a degree in art history — we don’t sit and agonize a whole ton. We know what we like. Every piece is different than the next, but we know what we like. The process moves pretty fast, and it’s been that way for a few months: churning through one piece of artwork a week.

JTS: How can you work so fast?

DPS: Being in the architecture business really beat all that crap out of me. I’m a very pragmatic type of artist because of my background. I’m not going to sit and suffer over a piece. I’ve got a family to feed. I don’t really have the luxury of saying ‘No no no, that’s not my vision.’ You can’t force people to buy what your selling, and to do that you have to have some degree of collaboration. I run my business almost exactly like a tattoo shop. JTS: Burial cans are notable for having a distinct design on the front and back. Where’d that come from?

DPS: It’s the dark side and light side. One’s a little more beautiful and flowery and the other is more about death and dying. Nasty insects. More skulls and bones. The idea is that life is [full of] amazing juxtapositions, life, death, dying, rebirth, light and dark, yin and yang.

The front and back used to be the case every time in the beginning, but a lot of the week to week stuff is now the 750ml bottle releases. On those there’s just one panel of artwork. Or we’ve been doing collabs with other breweries, like Other Half. Two sides are strictly for Burial on-the-shelf releases. We thought it’d be interesting because depending on how it gets placed on the shelf, you’ll see it differently.

JTS: What’s your backstory? How’d you come to be the artist that you are today?

Related Reads
People
How One Company is Revolutionizing Brewing Technology
People
The Story Behind Voodoo good vibes IPA
People
Meet Jillian Evanko, President and CEO of One of Craft Beer’s Leading Inclusive and Equitable Companies
DPS: I’ve been drawing my whole life. It used to drive my mom nuts. I would doodle all over her lamp shades and the walls. I’d draw on everything; I was a machine. Half the time they didn’t need a babysitter. They’d sit me down with a stack of paper and a ballpoint pen and I’d be occupied for hours.

Then, coming up as a teenager, there was a DYI scene that bloomed in the 80s. You did everything on your own. These bands booked on their own venues, did their own art, etc. So I was doing flyers for band shows and skateboarding shows. Hand drawing t-shirts for my bands. None of us could afford our own shirts. Art was a huge part of my life growing up. Almost a necessity. Music has been a huge part of my life since I was three. I wanted to do art for a living. My mom said find something practical. Just drawing stuff isn’t going to make you money. So I set my sights on architecture. Then, after 20 years of architecture, I got really burned out. So I went back to art part time. In the beginning I did it for free. I picked a scene I really loved and kept giving stuff away. I was drawing four hours a night at the dining room table. It got to the point three or four years ago that I got laid off, but I had doubled my income from art. I thought about getting another job, and was really surprised when my wife said ‘Fuck that, keep doing this. You look like you’re shy about jumping out of a window.’

JTS: How do you feel about the growing popularity of craft beer?

DPS: As an artist, I really find it interesting. We’re finally seeing everything in life become artisan. People that are passionate create something that’s not traditionally artistic, but is everything it can be. We’re having a renaissance of guys who make sausages, or guys who make candles and compete with big box stores. When I talk to the Burial guys, everyone from the guy who was cleaning up or tending bar had the same passion as the guys who own it. There’s value in a belief in what you do. When I draw these things and taste their beers, I’m blown away. All I drink now is craft beer. You can just taste so many people working hard at what they do. If you like beer it’s a good time to be alive. DPS: If I pick a standard one — Surf Wax IPA — but they’re doing an amazing job with sours. I love their beer and I swear on my mother’s life it has nothing to do with drawing for them. It’s the best beer I’ve ever had consistently across the board. And I don’t have ready access to their beer. But even if it’s been sitting in a box for a week coming in transit, it’s still the best beer I’ve ever tasted. Even styles of beer that historically my wife and I hated — like saisons — I love when I drink it from these guys. If you can get me to like a saison then you’re doing something right.

JTS: How has working for Burial changed your opinion on their beer, or craft beer in general?

DPS: I love the fact that art to them is not just something you apply to a can, some whimsical colors. The process we go through, as quick as it is, is super important to them. How invested they get is in the art is pretty cool. It’s humbling to me that they make me feel so important. All I can speak to is my personal experience. When I walk around the beer store at home and I’m looking at it, and I don’t mean it demeaning or to put myself above anyone else, but being honest and truthful there’s so much I see that’s just sort of bland and doesn’t seem like there’s really an emphasis toward actual art. Just some computer shapes and a graphic designer kind of thing. I don’t see a lot of heart in it I guess. Some might take offense, but it just does speak it me.