At 9:30am in the morning, my Lyft pulled up to a building on a nondescript corner of Downing St and E. 30th Ave in Denver, CO. I saw no one around as I walked up to the frosted glass door and pushed. But the door remained locked. For a moment I stood there unsure: Was I in the right place? What was I doing here? But I immediately silenced all these thoughts as I heard an audible click. Summoning my courage, I took one last look around, let out a deep breath, and walked inside The Beer Spa.

I’ll be honest, when I heard the words “beer” and “spa” in the same sentence, I panicked a bit.

What is a beer spa? Am I going to be soaking in a tub of beer? Will this idea work?

Those who know me probably won’t be surprised to hear me say: I’m not one for beauty regimens; I find the thought of another human digging their hands into my back about as comforting as drinking a barrel-aged stout on a one-hundred-degree day; and I spend far more time drinking Bomb! than dabbling in bath bombs. (Although I will admit, I do love the occasional hot bath and a book.)

But from my very first step inside, The Beer Spa whisked me away into a little oasis. One that I might never have known existed if I was just passing by on the street.

Inside this small slice of tranquil paradise, I found a place as equally dedicated to plumbing me with beer as primping and pampering me.

All in a gorgeous space with incredibly thoughtful touches.

So let me say, coming from someone who has previously avoided spas with a passion, The Beer Spa in Denver is freakin’ amazing.

Who Came Up With the Idea for a Beer Spa?

Craft beer on its own: a thriving community.

Spas too have their own place in almost every culture.

A beer spa isn’t something we’ve necessarily seen often here in the U.S.

But you can find them in other places around the world.

Both with former corporate careers, the duo quit their jobs in 2017, opting to travel the world in search of a new business idea.

After visiting twenty-five countries in fourteen months, French and Zouaoui decided to combine the idea of the beer spas they found in Europe with inspiration from the spa cultures of Japan, South Korea, and Southeast Asia.

Together, they opened The Beer Spa in early 2021. And for the last year and a half, the have been providing the good folks of the Mile High City with a watering hole unlike any I’ve ever seen.

Make no mistake, beer weaves its way through every step of The Beer Spa.

Immediately upon walking in, I was asked two things: Can you take off your shoes (and slip into these uber comfortable slippers provided by The Beer Spa), and what beer would you like to drink?

Leveraging their own self-pour tap wall from IPourIt, The Beer Spa encourages you to simply tap your unique RFID card on the panel above a tap handle and fill up your own The Beer Spa branded tumbler, uniquely insulated to keep your beer cold (more on that later), with whatever beer, wine, cider, kombucha, or even NA option you desire.

Each month, The Beer Spa partners with a different local brewery to feature upwards of five different beers on tap.

When I visited in October, The Beer Spa featured Ska Brewing, even collabing on their own beer called Spa Sidekick.

Trying a little taste, I found the beer to be very refreshing and a little zesty. But ultimately, for a little hair of the dog, I went for the uber light, crushable Ska True Blonde Ale.

After all, I was here to “detox” from an epic four days of drinking and eating around Denver.

It’s a modern approach. One that means the taproom area in front has big plush blue armchairs, velvety jungle green loveseats, and even an old-school claw-footed bathtub filled with white and black balls.

Signs throughout the spa encourage you to take your own wacky photos in the tub, posting them on Instagram for your chance to win a free spa package.

Touches like that show how French and Zouaoui made The Beer Spa with more of the Millenial in mind.

Those little nuances will follow you all over, from the gender neutral restrooms encouraging a more inclusive environment to your own individual Therapy Room.

After making sure I had a full cup, the super friendly staff gave me a tour and ushered me into my own private Therapy Room.

For the next hour, in my own little paradise, I could leisurely walk myself through their wellness experience.

And while I had no problem pampering myself at The Beer Spa, it’s not uncommon to find couples relaxing in one of the four beer therapy rooms together or even groups of friends. French and Zouaoui designed the rooms with garage doors in between them that can be lifted to accommodate parties! Again, another well-considered touch.

Because here, beer isn’t just a novelty. Rather, the full therapeutic benefits of hops and barley are on full display outside of your glass in three different stages.

First, your “Beer Therapy Circuit” starts with a twenty-minute schvitz in a Sunlighten™ sauna. A sort of infrared therapy that can reach up to 150 degrees, this special sauna provides a detox that’s seven to ten times greater than a conventional sauna.

Tip the preset hourglass over, sit back, and watch the sands of time slowly pour out as sweat and toxins leave your body.

After a twenty-minute sojourn in the sauna, you meander over to the “Shower Beer,” where you’ll get a quick ten- to fifteen-second dunk in a cold shower (shower beer!). Wash away the sweat and emerge clean and refreshed.

For the third and final step of your journey, you get to soak in a hot tub that’s kept just a skosh cooler than normal to make sure you can thoroughly enjoy your dip without getting overheated or dehydrated (another thoughtful touch).

Inside you’ll find an aromatic bag of malt and hops from one of the local beers on tap at the moment. This visit was Ska’s Pin Stripe red ale featuring Columbus hops and English Caramalt plus The Beer Spa’s own addition of an herb of the month: Dill Seed, known to boost skin firmness and smooth fine lines and wrinkles.

Tack on a Zero Gravity Massage

I emerged from my hour-long beer sweat and soak utterly relaxed. Beer in hand, I cooled down in their lounge area. (Again, kept just a tad bit colder to keep you from overheating). The staff offered me more water to keep me hydrated and I just sat in a moment of silence and bliss.

I didn’t check my phone for Slacks.

I didn’t see if I had any unread emails.

I just sat down sipping my still-cold Ska True Blonde Ale and enjoyed being utterly calm.

If you’re looking for the sprinkles on top of the proverbial sundae, add on a Zero Gravity massage where you sit in a chair and let this amazing contraption roll, squeeze, and press your body like a ball of dough.

And I thought I couldn’t get any more relaxed.

It’s All the Little Touches

Everything at The Beer Spa has been thought out. For instance, the custom-made tumblers that keep your beer cold even in the 100+ degree sauna. Or the provided robes and slippers and the gender neutral restrooms.

You can even hit the personal bell by the door in your personal room to have someone drop by to top off your tumbler with more beer.

From the moment you walk in the front door, French and Zouaoui have curated The Beer Spa with one thing in mind: to create an incredible experience with beer in your glass and beer out of your glass.

The Beer Spa is the perfect place for a date, a party with friends, or to relax on your own.

Run, Walk, or Lyft to The Beer Spa Right Now

I admit, I wasn’t sure what to expect here. But I left The Beer Spa ready to hit the airport feeling a little more rested, relaxed, and detoxed (with, of course, just a tiny hair of the dog).

This is an incredibly unique experience you won’t want to miss if you’re in Denver. Just preferably visit after you’ve spent a weekend reveling in the Mile High City.

Currently Drinking: Fort Point Beer Co. KSA
Grace is the Managing Editor for Hop Culture and Untappd. She also organizes and produces the largest weeklong women in craft beer festival in the country, Beers With(out) Beards and the first-ever festival celebrating the colorful, vibrant voices in the queer community in craft beer, Queer Beer. An avid craft beer nerd Grace always found a way to work with beer. After graduating with a journalism degree from Northwestern University, she attended culinary school before working in restaurant management. She moonlighted as a brand ambassador at 3 Sheeps Brewing Co on the weekends before moving into the beer industry full time as an account coordinator at 5 Rabbit Cerveceria. Grace holds her Masters degree in the Food Studies program at NYU.
How to Spend an Epic Four Days Drinking and Eating in Denver 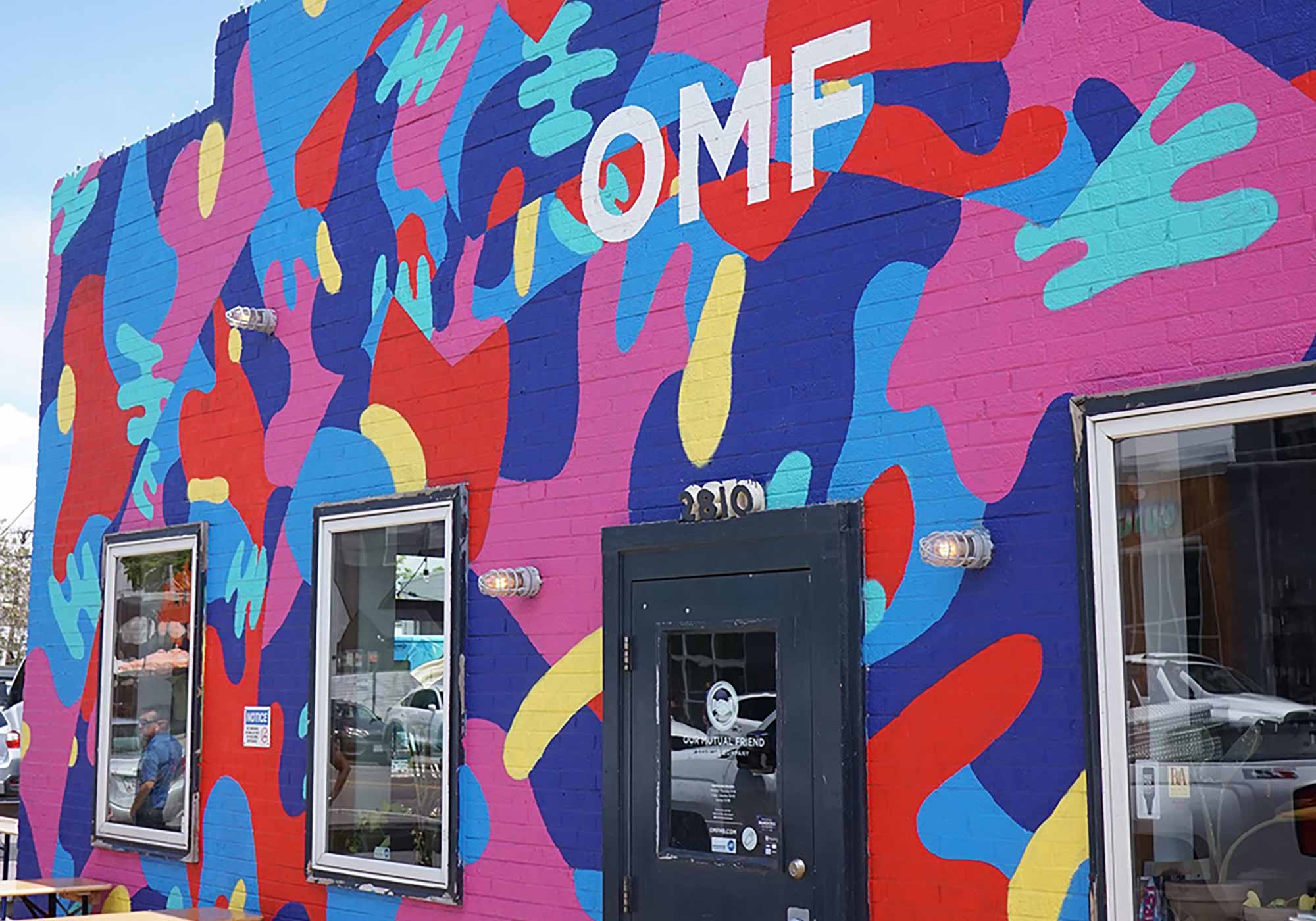