The Conflicting Chaos of The Great American Beer Festival 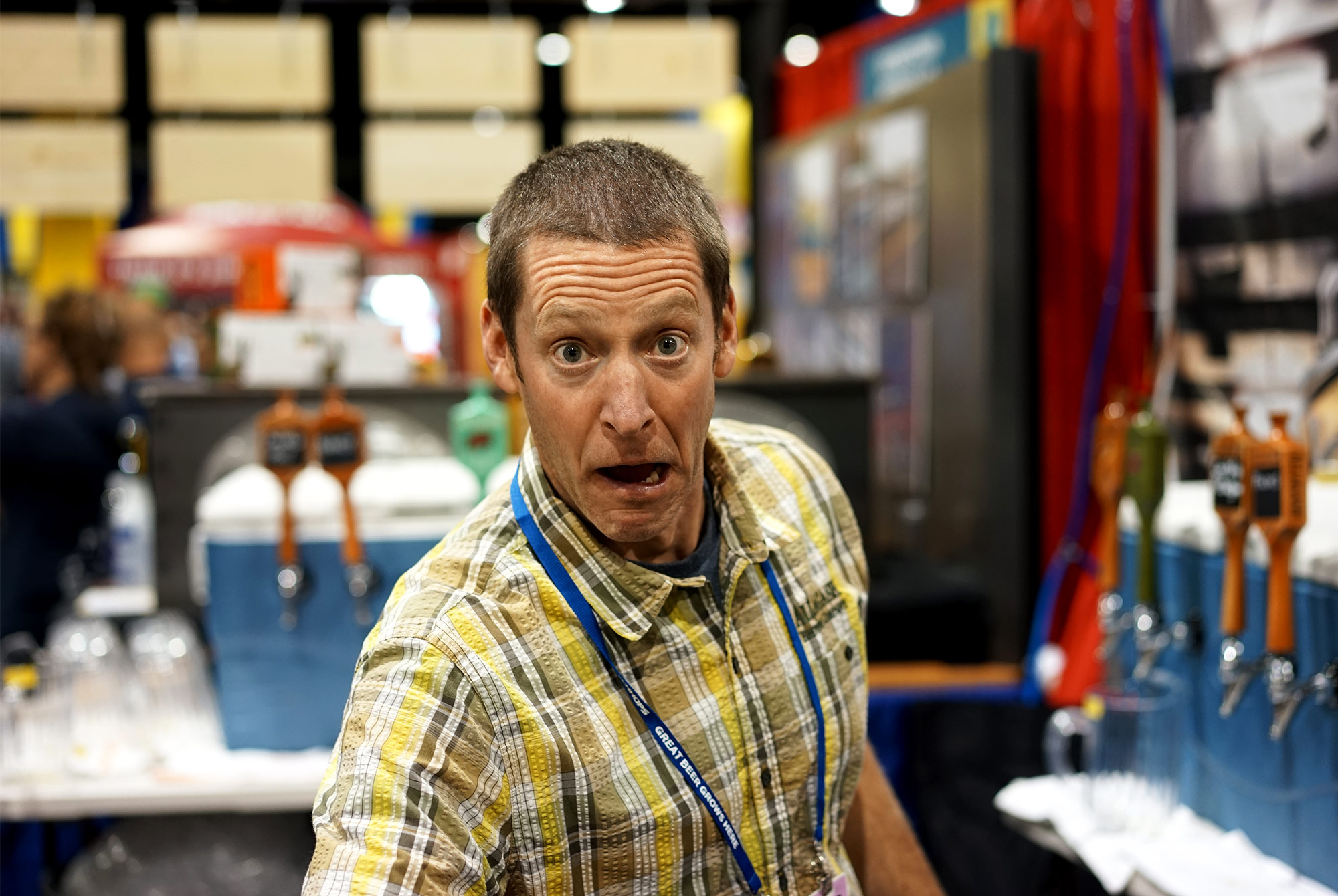 The Great American Beer Festival, which takes place at Denver’s Colorado Convention Center each year, is the nation’s largest craft festival. With over 800 breweries showcasing over 3,800 unique beers, GABF promotes itself as “the premier U.S. beer festival and competition” that “brings together the brewers and diverse beers that make the U.S. the world’s greatest brewing nation.”

But describing the event as such would be like describing the Kentucky Derby as simply a high-stakes horse race. In reality, GABF is so massively overwhelming that one would be well-advised to abandon any attempt to rationalize the madness at the outset. Picture a nightmarishly monstrous Costco, multiply its size by about five, and replace shelves and aisles with double-sided rows of tables jammed together like a Chinese market where breweries from across the country offer one ounce pours of choice selections in attempt to win medals.

Amidst the labyrinth, imagine many stages of live cover bands, an astroturf region of cornhole-playing, and random assortments of tables near pizza and bratwurst vendors. Finally, envision tens of thousands of mostly-white, mostly-American drunk people swarming in every direction with plastic cups extended, bumping into each other while chomping pretzel necklaces, screaming loudly, and satisfying many spontaneous urges simultaneously. You’re starting to get the picture.

Before I secured a press pass for GABF’s two Saturday sessions, I had not drunk for several months. I had decided alcohol brings me to a more primal state, and I’ve been trying to brush up on being a matured adult. But since it was GABF, I figured I might as well go all in and see what happened.

He screamed he wanted her hat. She yelled he could have it for $100. He pulled out a $100 bill and snatched the hat. His first act as owner was to rub it over his crotch.

Chaotic circumstances surrounded my search for my press pass. It felt like a live-action version of the transfers and dropped calls that accompany seeking a refund from Time Warner. I was led conflicting directions by people wearing tucked-in shirts and badges. One told me to travel down the echoing marble hall. Another told me to cross the street. A woman wearing sunglasses asked for assistance via walkie. An elderly man named Bob, a Media Booth guardian, instructed me to ascend three stories via elevator. I liked Bob, so I rode the elevator, and I arrived in what appeared to be a surveillance booth. I looked left. At the end of a narrow hallway, in a sterile room, a woman in a headset slowly turned her head. On instinct I fled. Down a concrete stairwell I tromped until I stumbled into a massive room: the 584,000 sq. ft. Exhibit Hall. I had found a secret entrance. Without credentials or ticket, I beheld the calm before the GABF storm.

The miracle could not last. Official-looking personnel surrounded me. I dipped out, wandered at random, and somehow arrived at the media booth. With relief, I received my pass. Then I got denied access. I’d been given a “Brewer’s Pass” for some guy named “Matt” on behalf of Jagged Mountain Brewery. What forces operated this chaos? When at last I solved the snafu, I re-entered the hall and immediately started drinking.

I found myself in the midst of a monstrosity of human activity energized by a wide array of intentions. In one realm, there were members of the Brewers Association (BA) sipping slowly, explaining flavor profiles with distant looks in their eyes. In another, volunteers in lime green shirts frantically poured pitchers to meet an insatiable demand. Most numerous were the partiers, who would drink a sample, go to the next stand, drink a sample, and repeat, stopping only to yell loud conversations at each other. I fell into a group of partiers from Texas to whom my beer-loving pal Chris introduced me. As a buzz set in, I witnessed a very fat man stumble toward a girl from our group. He screamed he wanted her hat. She yelled he could have it for $100. He pulled out a $100 bill and snatched the hat. His first act as owner was to rub it over his crotch. Then he walked away. The girl told me she bought the hat for $20 at the merch tent 50 yards away.

A man with a white-painted face and cape collided with me. “Excuse my brain,” he said, then continued on, dragging what appeared to be a human brain on a leash behind him.

Between sessions I interviewed Chris in the Media Booth because we were buzzed and it sounded like fun. It turned out to be a cramped room with freaky white walls and a cloth-covered table offering coffee and Chex Mix. There I met several men who have made beer their livelihood. One was “The Beer Trekker,” a burly Venezuelan man sporting a massive beard. He travels the world, takes pictures of beer, and tells stories. Another was a thin, bespectacled writer for Paste Magazine. When Paste-man got talking to The Beer Trekker, saying things like, “You like Pumking?” I realized it was my time to bounce. I chugged some coffee, took a breath, and entered the expanded chaos of the second Saturday session.

A half hour later, I was officially drunk. I no longer had any idea what I was consuming. I was simply following Chris, who had rendezvoused with more friends. These friends turned out to be podcasters Nathaniel Boyle, host of “The Travelers,” and Jackie Nourse, host of “The Budget-Minded Traveler”. I listen to both, and this sudden experience of downing brews with people whose voices had soothed me on many work commutes propelled reality into surreal levels. We passed a neon tent of swirling lights where dozens of people danced to music only they could hear through booth-provided headphones.

As Nathaniel spoke of the dreamlike perfection of Kubrick’s Eyes Wide Shut, a group of women dressed as fairies skipped by. As Jackie reported coincidentally meeting the Hop Culture editors, whom I’d never seen in the physical, a man with a white-painted face and cape collided with me. “Excuse my brain,” he said, then continued on, dragging what appeared to be a human brain on a leash behind him. An assemblage of large men wearing kilts blew into bagpipes. Thousands of people were screaming. Was this actually happening? If so, why? Was it a way of forgetting all the messed up shit happening in this 2017 world? What logic held together this surreal monstrosity?

Beer. Beer was the constant.

Our cultural obsession with craft speaks to our desire to know each other, share stories, and release parts of ourselves oft left encaged.

Though beer can elicit primal and downright-idiotic behavior, so too can it bring people together in ways neither sobriety nor any other intoxicant can. Our cultural obsession with craft speaks to our desire to know each other, share stories, and release parts of ourselves oft left encaged. That can be a good or bad thing, depending on what you lock away. For me, I suppose I’d locked away this desire toward indulgence I’d convinced myself I ought to leave behind, cynically deeming it too primitive for my standards. GABF invited that desire to the forefront. The drunken chaos received me, and everything was animated in delight.

After the blinding fluorescent lights signaled GABF’s end, I stumbled along to a nearby restaurant with three random guys whose connection to the group I had lost entirely. I didn’t know their names, and they didn’t know mine. Clinking our glasses in celebration of beer, we dined on deep-fried pig ears, chewing the cartilage like primates.

Currently Drinking: Odell's Settle Down Brown
Sean Lawlor writes fiction and nonfiction about trying (and often failing) to be a functional human being in contemporary America. His work has appeared in a few places. Surprisingly, he's the Health/Wellness editor for Entropy Magazine. When not writing, he can be found hiking trails, shooting arrows at targets, climbing rocks, and sitting with eyes closed for extended periods of time. His blog, which has about seven followers, can be found at altpathways.com.
seanplawlor