24 of the Best Male Craft Beer Lovers on Instagram 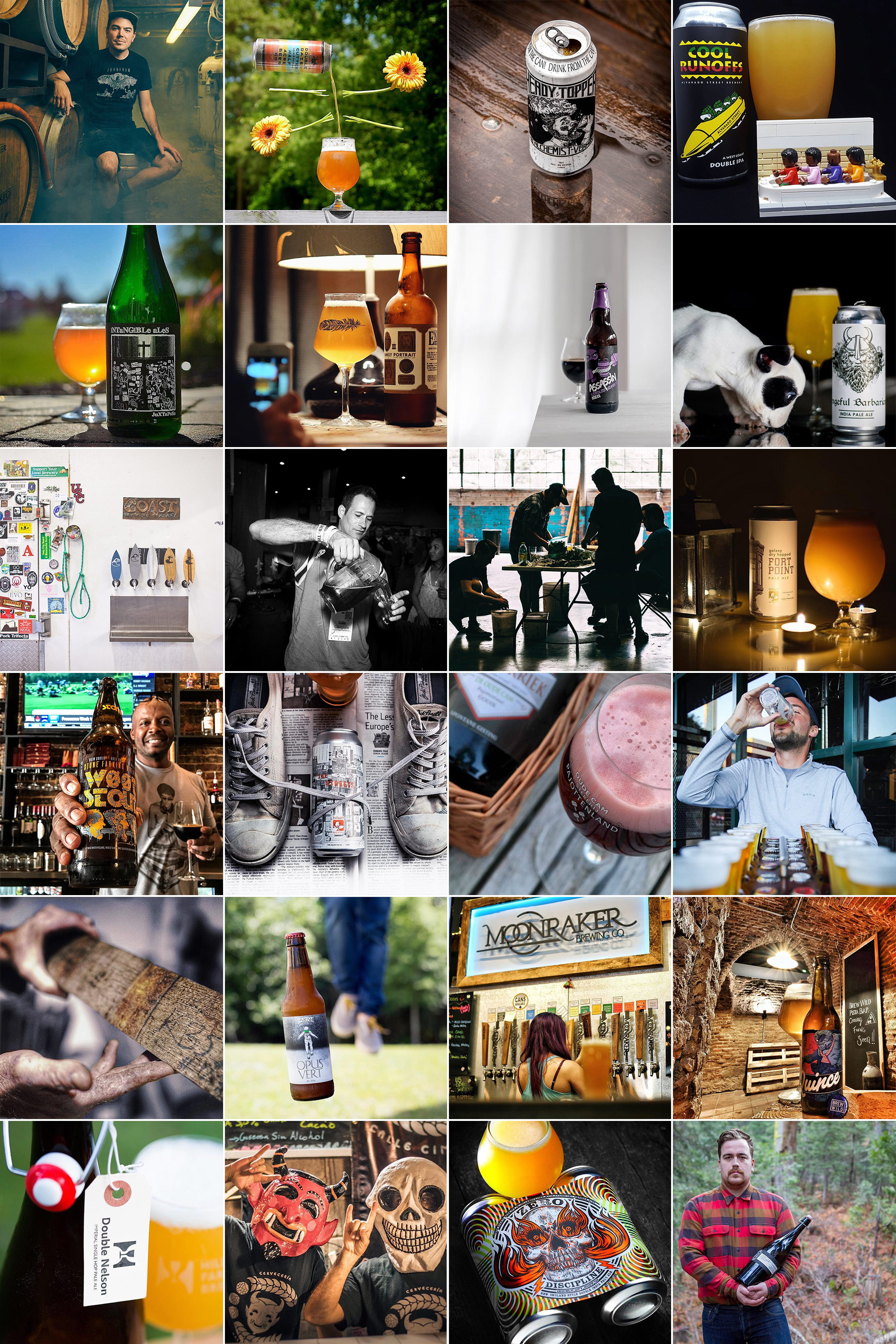 We had such an overwhelmingly positive response to our lineup of the best female craft beer Instagrammers that we began considering one for men — we were actually preparing to pull the trigger when we got an email from Miguel Rivas, photographer and founder of the popular @thebeertrekker Instagram account. Who better to make the selections than someone who already knows what it takes to run a high-quality account? With Miguel’s help, we picked 24 of today’s best craft beer Instagram accounts run by men. Get all the bottle shots, beer porn, and Lego sets below. As always, accounts were chosen based on merit. When Doug Veliky isn’t crunching numbers as the CFO of Revolution Brewing in Chicago, he’s taking high quality photographs of craft beer. He tastefully composes each of his shots, from the flower lei placed around a bottle of Hawaiian Speedway Stout to the can of Alemerica the Beautiful sitting atop a picket fence. “This is my tribute to the industry I love,” writes Veliky. It’s a fitting tribute, indeed. Neil Johnson’s Instagram feed, which mixes classic high quality craft beer photography with the occasional Photoshop job to keep things interesting, can only be described as epic. It’s probably the only place on the planet you can see a disembodied arm holding a can of Blue Point Brewing’s Citrus Plunge IPA bursting through a sheet of ice. It’s a wonder that this gem of an account only has just over 1,000 followers. There are quite a few accounts that pose Legos with beer, but the best will always be the original: Dano Mite’s @louiebaton. He somehow seems to have the right pieces for every shot, like the small Lego shower set (complete with a green Lego man) he placed beside a can of Noble Ale Works’ Citra Showers. If you’re looking for an account to make you smile, you can’t do much better than this one. “Trying to make beer look as good as it tastes.” Such is Dan Miller’s holy mission, and damn if he isn’t doing a terrific job. His crisp, clean bottle and beer shots will have you counting down the minutes until your next bottle. Jeremy Bebeau’s account features some awesome photography in a variety of settings, but our favorite shots are the ones he sets amongst the splendors of nature, from leafy forests to sandy beaches and snowy mountains. His account is perfect for the person that dreams about his or her next hike as often as their next Heady Topper. If you’re from Texas and you like beer, you may have heard of SA Beer Magazine, a quarterly print publication focused on San Antonio and the surrounding area. The magazine’s Editor in Chief, JoMando Cruz, takes all holds off his photography on his personal Instagram, which showcases beautifully lit shots and portraits from the beer industry and beyond. If the world were a more fair and reasonable place, C.D. Jensen, aka @aleauteur, would be shooting photography for Hop Culture. Alas, we must content ourselves with looking at his Instagram, or better yet, his blog. If you like what you see on his feed, check out Ale Auteur for even more terrific photography. Unlike many of the photographers on this list, Dennis Malcolm Byron, who goes by the moniker Ale Sharpton, has a full-time job in the beer industry, as well as the life that everyone dreams about — as a journalist and foodie, he criss-crosses the country in search of interesting beer stories. Follow him on his adventures at @realalesharpton. There’s a myriad accounts that take great pictures of beer, so Matt Furman decided to go a different route by taking pictures of the people who make it. His cleverly titled account has him traveling all over the country — from Monkish in LA to Suarez Family Brewing in NY — and even to other countries. @thepourtraits is a refreshing feed in a game dominated by glassware. Like Matt Furman, Dustin Hall doesn’t just shoot cans or bottles — he captures beer and brewing culture. We actually met Dustin while waiting for some Black Project beer in Denver, and he’s not only a terrific photographer, but a nice and interesting guy. Check out his new book on the Colorado craft brewing industry, which got funded on Kickstarter in less than eight hours. If Matt Ward’s shots look impossible, that’s because they are. The stay-at-home dad mixes traditional photography with Photoshop wizardry to make cans float and sunsets pop. In addition to running his Instagram, Ward sells prints, coasters, and swags on his website. Perhaps the most classic of all our men’s craft beer Instagram accounts, @beerlyinfocus features some of the crispiest can and bottle shots we’ve ever seen. At a time when everyone and their brother tries to chronicle their boozy adventures with an iPhone, the quality of @beerlyinfocus’s photography makes the account an obvious standout. We’re traveling overseas for this one! If you’re tired of seeing the same old American beers popping up on your Instagram feed, try following Spanish photographer Carlos Alvarez de Cea. His account features the occasional US beer, but the real gems are the canned and bottled treasures from Spain. We don’t speak Spanish (Baxter!) but we’re pretty sure that “Documentando la cultura craft beer en Costa Rica y Latino América” means something along the lines of “I take really good photographs of the craft beer culture in Costa Rica and Latin America.” To expand your cultural horizons and learn about beer below the border, give Antonio Quiros Torres a follow. If you’ve been into craft beer for a while, you’ve probably dreamt about visiting Belgium, the motherland of sours. Kevin Desmet is lucky enough to live there. For the last four years, Kevin has been showcasing the evolution of the industry from his home base in Brussels. He also writes about his adventures on his blog, Belgian Beer Geek. Lo and behold, one of our favorite journalists also takes excellent pictures. Cory Smith, a New York City-based writer and photographer for Good Beer Hunting (among others), frequently visits some of the hottest breweries in the country, and his Instagram allows you to live vicariously through his experiences. Anyone want to head to Bissell Brothers? Most likely, the account in question is not referring to “Bokeh,” the 2017 film directed by Geoggrey Orthwein and Andrew Sullivan, but the photography term “bokeh,” or the quality of the blur in out-of-focus parts of a photograph. Whatever the reference, Michael Donk’s bottle and can shots will make you want to pop a few open for yourself. From South Bend, Indiana, comes one of the more artistic accounts on the list, and with only 1,306 followers, you’ll be able to say that you knew him back when. His account features bottles and cans from around the country, artfully arranged to showcase the art on the labels. Nick Takach’s creative use of color makes this account a true standout. “Craft beer and music make me smile,” writes Michael Szyldowski on his Instagram profile, and he follows it with a Dave Matthew’s quote: “Life is short but sweet for certain.” His account is a true testament to a man enjoying life to its fullest, because everyone knows that a good life is incomplete without some of the world’s tastiest brews. If you’re going to hold the @drinkingcraft username, you better be putting out high quality content. Over forty thousand followers agree that Kevin Boyd doesn’t disappoint. We wish our glassware was as cool as Matt Peck’s. We’re suckers for the hazy, nearly-orange-juice beers that he features on the @hopternal account, as well as for the fact that he uses a Sony A7, the same camera as our Editor in Chief. For anyone looking to make this list in the future, the a7 is a worthy investment. If you love can and bottle art, it’s worth following @jghopslam. His account features some of the most interesting art ever paired with beer, from LIC’s Pile of Crowns to RaR’s Blacker the Berry. It’s almost enough to make you want to start collecting empty cans. A full-time apparel graphic designer for Beloved Shirts, Justin Graziano started shooting beer last April when he created a brand called Beer Breath. Originally, his photography on @beerbreathco came second to the brand, but as he continued to build it became one of his main focuses. In his words, “Supporting the local and indie breweries is the least I can do to show them that all their hard work and efforts has made a positive influence to me.” Based in Hampton, Virginia, @hopthirst strikes a balance between everyday photography and a more magical beer drinking experience. It’s an artistic outlet, and a celebration of the honest brews and people who make up the craft beer community.