What Is the Pink Boots Society? 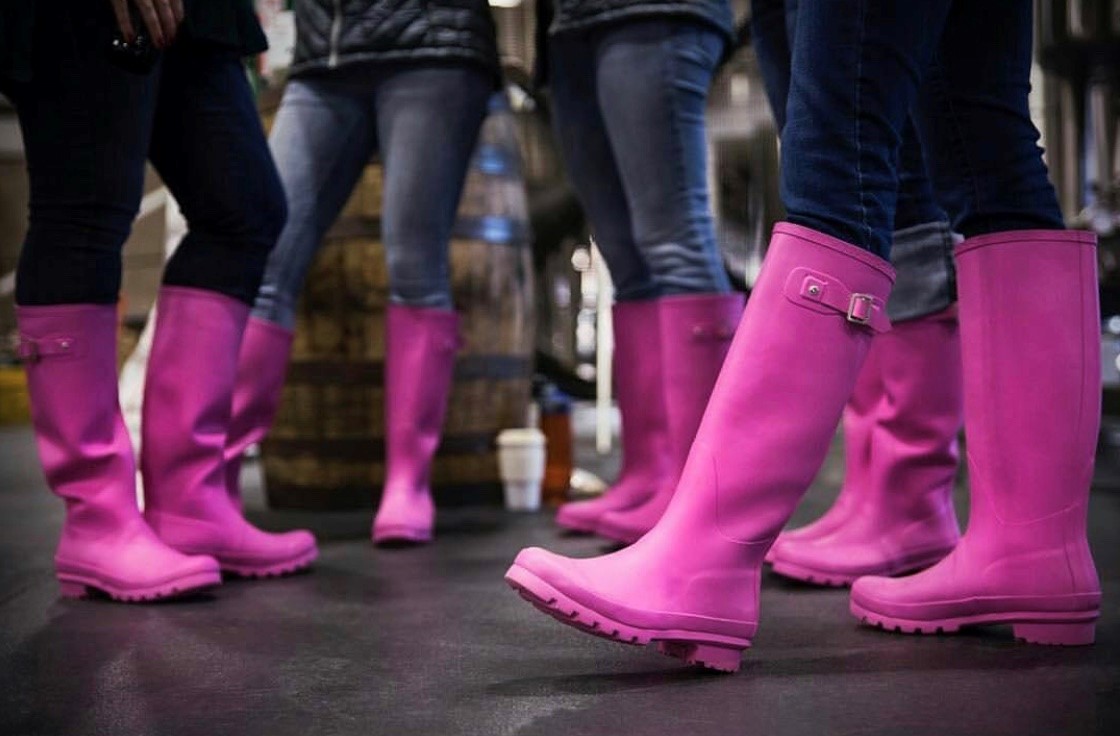 As the community of American craft brewers continues to swell and surge, the industry needs support. Trade organizations like the Brewers Association were formed to unite and promote craft beer. Local guilds continued that work at the state and regional levels. Guilds and trade organizations are able to offer support at an industrial level, but what about at the personal level? That’s where the Pink Boots Society (PBS) steps in.

By now, you’ve likely heard of PBS or seen your favorite local brewer rocking their own pair of pink boots. Formed in 2007, the organization works to shed a spotlight on and garner support for women in the craft beer industry, a segment that is so often underrepresented.

Since its inception, the organization has flourished with chapters all over the country and partners at various levels of the craft beer community. In fact, arguably PBS’ largest campaign is its annual Pink Boots Collaboration Brew Day®, which celebrates International Women’s Day. Soon after the tradition began, Yakima Chief Hops collaborated and began producing yearly exclusive hop blends for the occasion.

Although we’ve worked with the Pink Boots Society on several projects in the past, we wanted to take the time to help put together a comprehensive history of the organization and explain how PBS continues to impact the modern craft beer landscape and lift up the women in craft beer.

The History of the Pink Boots Society The Pink Boots Society started as a fairly simple organization — an online forum of female brewers. Teri Fahrendorf, the founder of PBS, quit her job as a brewmaster in 2007 and began a trek across the country traveling to various breweries and meeting fellow brewers along the way.

Jen Jordan, who serves as the Pink Boots Society’s President, shared a quote from Fahrendorf with us, “What I found were many new or young women brewers who had never met a woman brewmaster, and in fact, had never met another woman brewer. They had felt throughout their careers that they were ‘the only woman brewer’, and thus felt quite alone.”

That realization led Fahrendorf to compile a list of 60 women brewers online; she dubbed this group The Pink Boots Society, inspired by Fahrendorf’s own pink boots, a gift from her mother-in-law.

Shortly afterward in 2008, Laura Ulrich, a small batch brewer at Stone Brewing (and PBS’ President Emeritus) held the first Pink Boots meeting at the Craft Brewers Conference. Attended by 22 women, that meeting helped set the standard of what the Pink Boots Society would be — an organization that stood for one thing: Women Beer Professionals. “Therefore, any woman—anywhere in the world—who earned income from beer would be able to join,” shares Jordan. In the years that followed, the Pink Boots Society earned its nonprofit status and began awarding annual scholarships to women in the craft beer industry. The organization has also incorporated data analysis, educational programming, and hosted conferences all aiming at that goal of supporting women beer professionals.

The Pink Boots Society in 2021 Since Fahrendorf donned pink boots and trekked across America, thousands of women in craft beer have joined the Pink Boots Society.

“Pink Boots Society currently has 74 Chapters and just over 2000 members, which include professional members, student members, and those who are in the process of building and opening a business,” shares Jordan. “After 14 years, Pink Boots Society is still very much a volunteer-driven organization. Even though we’ve had to move the majority of our meetings online, our local Chapter Leaders are keeping our members connected, and sharing resources.”

Of those 74 chapters, a majority are in the United States. But, there are also PBS chapters across the world in countries like Peru, Australia, and Spain.

“We still managed to award 46 scholarships, even though many had to be rescheduled, as they involved travel and in-person education,” shares Jordan. “We launched a new online communication forum for members, which includes an educational content sharing library. We expanded our membership definition to include all women in the fermented Alcohol Beverage Industry and developed an Inclusion and Equity task force. We surveyed our members to find out more about their sense of belonging in the organization, and their thoughts on access to member benefits. We also moved the vast majority of local meetings and education to a virtual format. Plus, we celebrated our 3rd year in partnership with Yakima Chief Hops and the Pink Boots Blend.”

The Pink Boots Society managed to keep its operation running despite the global pandemic. And, found cause for celebration in the midst of all the chaos.

“The recent focus on physical, emotional, and mental health within the industry for employees and consumers is very positive,” Jordan says. “There is still a long way to go here, but recognizing the need is a great start. It is exciting to see that the industry is now listening to, and amplifying the voices of, many who have been under-represented in the past. Many in the industry are beginning to move beyond looking better, and know it is time to re-evaluate the ongoing work they must do to be better.” The Pink Boots Society’s annual Pink Boots Collaboration Brew Day® is one of the organization’s greatest points of visibility in the industry. Breweries from across the country participate and the hop blend prepared by Yakima Chief Hops is used in a variety of beers throughout the year.

For this year’s edition of the celebration, there were over 350 participating breweries. “By registering they are committing to making a donation to their local chapter as well as the organization as a whole,” explains Jordan. “This is the biggest fundraiser of the year for Pink Boots Society.”

In past years, the Hop Culture team has taken part in these local brew days. And, we’ve learned about how Yakima Chief Hops first became involved. “The thought was, [how can we] work with women in the industry and make an impact on women in the brewing profession,” Kelly Lohrmeyer, YCH’s Regional Sales Manager for the Pacific region, shared in a former interview.

The result was an annual hop blend that members of the Pink Boots Society are able to hand-pick and use for PBS collaboration brews. Not only does it further fuel the camaraderie and impact that the Pink Boots Society has on the industry, it also fuels the organization and contributes to scholarship and educational opportunities. The work to create a more equitable, inclusive craft beer industry does not end with one collaboration beer. Or, one month of celebrating women. Or, one single organization. But, groups like the Pink Boots Society help bring more attention to and offer meaningful support for a group of industry professionals who are largely ignored.

“The industry succeeds when the women working within it succeed,” Jordan explains matter-of-factly.

One of PBS’ most recent campaigns is a partnership with Elysian Brewing that has been running for the month of March 2021. Until the end of today (March 31st), you can text “PINKBOOTS” to 78896. For every text, Elysian Brewing will donate $5 to the Pink Boots Society, up to $10,000.

So, how can folks continue to support the efforts of organizations like the Pink Boots Society?

“Businesses can offer to reimburse women in their company for their $45 annual membership fee, and help our membership continue to grow,” shares Jordan. “Companies can develop programs and policies that assure that their workplace is welcoming to all women. If folks in the industry recognize and support women in all aspects of their work, they will be contributing to the success of not just PBS, but the future of the entire industry.”

Currently Drinking: Saison Dupont
John A. Paradiso is the former managing editor at Hop Culture Magazine and current managing editor at Cool Material. His interests include listening to the tunes of King Gizzard and the Lizard Wizzard and watching Wes Anderson films. His Wednesdays are spent picking up comics at the local comic book shop and his weekends are spent watching Premier League soccer. He's probably down to get a beer later.
@paradiseohh
Brewing Change and Brewing Beer with the Pink Boots Society