What Is a Witbier? 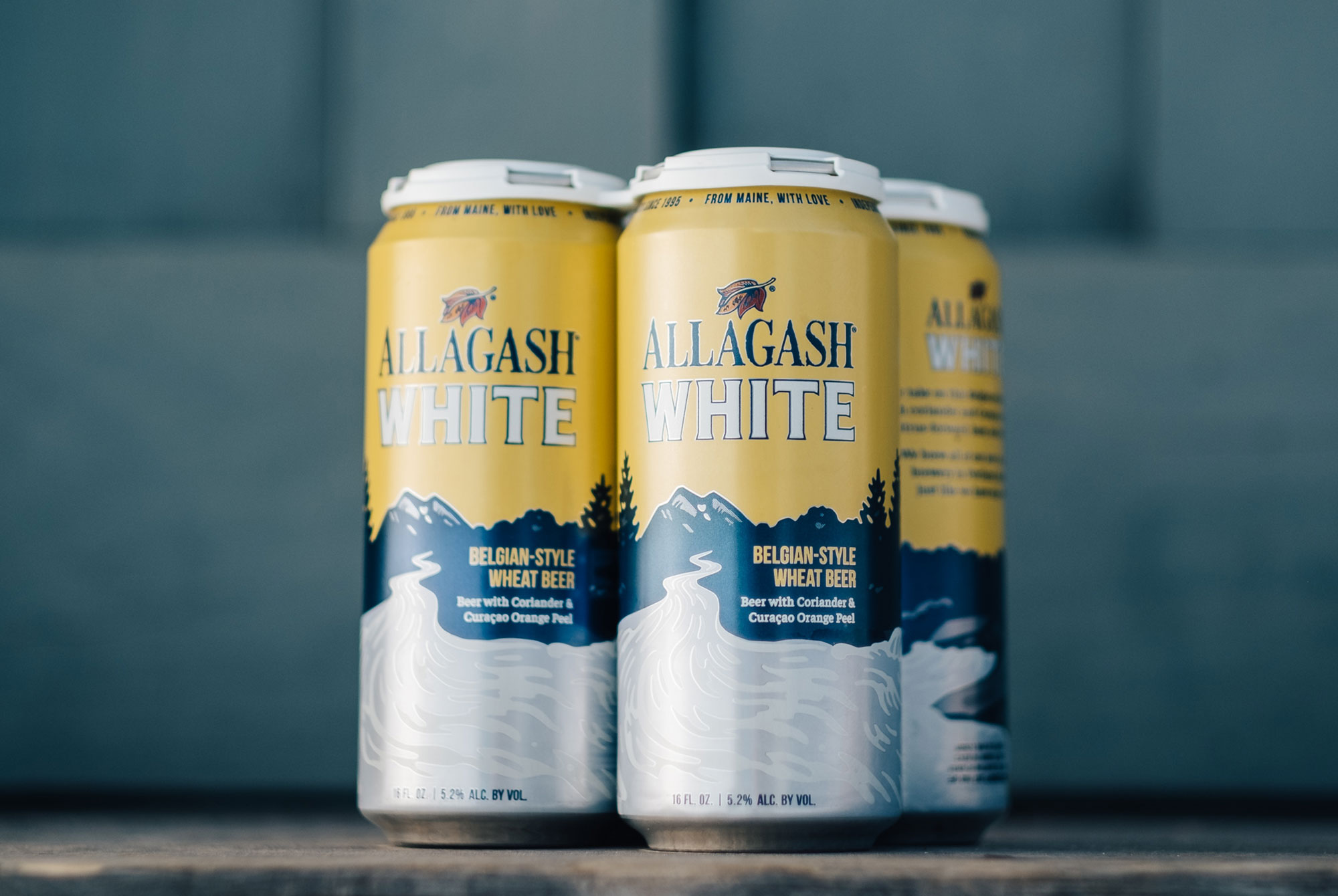 A 4-pack of Allagash White got me through a rainy Maine weekend back in 2014. My strongest memory of those two days is walking with my wife and friends from our cars to a cabin in a downpour, clutching the cardboard package to my chest like my firstborn. By the time we shuffled inside, the carrier had dissolved — but the witbier was safe. And that’s all that mattered.

We usually associate chillier, rainier seasons with heavier beer styles like roasty toasty stouts, porters, or tripels. In the warmer, sunnier months we sip lighter-bodied, lighter-ABV beers such as kölschs, saisons, and session IPAs. So it can sometimes be rare to find a beer style fit for all times of the year. But the unassuming and noble witbier from Belgium manages to do just that: bridge the gap between ski slopes and beaches.

Like good neighbors and heavily-marketed insurance agencies, witbier is there, whether you need warming up or cooling off. This isn’t a flashy beer style. It isn’t funky or wacky, either. It’s simple, subtle, tasty, and versatile. And that is a good enough reason to give it respect.

What Is a Witbier?

The witbier style checks a lot of boxes. It’s a bridge beer that’s limber and comforting, explaining why it’s well-suited to all seasons. Balance is arguably witbier’s most important element. With a complementary palette of coriander, citrus, and other spices, witbiers are almost always cloudy.

Making them a style that’s recognizable to many people. Who hasn’t heard of Shock Top or Blue Moon?

On the craft side of things it’s hard to write witbier without including Allagash White in the same sentence. The classic American white beer, presents “clove, wheat, spice, and citrus notes” for Jason Perkins, brewmaster at Allagash Brewing Company. “If the beer is done well, all these flavors are in balance so you don’t have to notice all of those notes to just sit down and enjoy the beer.”

Similarly, Perennial Artisan Ales’ own version of a witbier called Daydream packs in pink peppercorns to compliment the coriander and orange peel that’s essential to witbier’s character. It’s easy going on the palette while giving a great depth of flavor.

With witbies there is just a certain indescribable alchemical pleasure to drinking them that many styles lack (which isn’t a knock on other styles as much as casual and anecdotal observation). There’s no pretense to witbier, but there is nuance. It satisfies the needs for consumers no matter how seriously they take their craft beverages.

It’s little wonder that witbier has not only thrived in the U.S., but survived.

The actual origins of witbier are heavily disputed, mostly because “wheat beer” is a very broad category with a bunch of sub-styles including hefeweizen, Berliner weisse, and gose. What everyone agrees on is that without Belgian brewer Pierre Celis, witbier would likely have died out decades ago. Celis revived the style in his Belgian hometown, Hoegaarden, a name that might ring a bell to anyone who’s ever had a witbier in the United States in the 1960s. But in 1991 Celis moved to Austin, Texas and started Celis Brewing, introducing the witbier to American drinkers.

The rest is recent history.

“Pierre Celis pretty much single handedly kept the style alive,” says Perkins. Backing up that claim, he rattles off the American evolution of witbier after Celis began brewing his own. Celis White, in Austin: That’s the beer that caught the attention of Allagash founder Rob Tod, who opened the now-celebrated Portland brewery in 1995. By chance, it’s also the same year Molson Coors first put Blue Moon on shelves.

“If we’re being honest,” says Perkins, “Blue Moon was a huge part in familiarizing the American public with the outline of the witbier style.” Cut Blue Moon out of witbier’s history in America and you lose Allagash White, and without Allagash White, you lose Perennial’s Daydreaming, and witbier might not be popular in this country’s craft beer scene today.

Unsurprisingly, that same lineage plays into how Chris Kinast, head brewer for Perennial Artisan Ales’ brewpub, Perennial on Lockwood in Missouri conceptualized Daydreaming. Just like Celis White and Blue Moon impacted Allagash, Kinast cites Allagash White as a major influence on his beer. “We’re merging this classic flavor profile that people are going to be familiar with [and] maybe some different ingredients that they might not be used to,” he says. It’s a witbier by all standards, but with touches added to let Perennial’s contribution to the style stand.

So, What’s Special About Witbier?

Nowadays, people who live, sleep, dream, and breathe craft beer want their beer to be “new.” They want whatever’s haziest or fruitiest, whatever has the most tang or the most outlandish adjuncts. To the average craft beer enthusiast, standard and reliable can often be synonyms for “boring”. But breweries serve more than just hop pundits. They serve normal people, too, people who have a specific definition of “beer” and consider milkshake IPAs and pastry sours major turn-offs.

“The beauty of the style,” says Perkins, “is that it is both easy to enjoy, if you’re just looking for a beer to sip on, and also a surprisingly complex beer, flavor-wise, if you want to start picking apart its flavors.”

Meaning however you define yourself – beer geek, normal beer drinker, or even a wine connoisseur – witbiers are a style that have something for everyone. And that’s what makes them so special.

“We make [a witbier] at Perennial that I developed a couple of years ago for a winery that we’re in partnership with,” says Kinast, referring to Defiance, MO’s Chandler Hill Vineyards. Chandler Hills has 14 taps for Perennial, and a while back, Kinast wanted to brew a beer just for them. “I figured, people who are going to be going to a winery, they’re going to be sitting outside, they’re going to want something refreshing,” he explains. No one wants a hefty drink on warm days, and no one wants a drink they don’t understand, either. They want to drink something that’s familiar.

And that’s a witbier – just like your good, friendly neighbor.

Allagash White has been around for so long that even if you’re a novice to craft beer, chances are you’ve at least heard of it. If you haven’t had a pour yet, let us break it down for you: Drink Allagash White. It’s spectacular.

Behind slightly in iconography an influence, but not overall deliciousness, are Brewery Ommegang Witte and Bell’s Oberon. These are two examples of American witbier done right.

Also worth checking out: Brouwerij St. Bernardus’s Wit and Bière Blanche from Side Project.

And of course if you’re looking for a slightly nuanced take on the American witbier you can’t go wrong with Perennial’s Daydream.

But the best way to find a good witbier is trying the witbiers brewed nearest you. A long-standing style with deep roots in beer’s history (even if the roots are tough to dig out), a witbier’s characteristics are more or less set in stone. It’s tweaks or little adjustments here and there in the finer details like the grain bill or the spices that ultimately give individual witbiers their shape.

Whatever shape they take, though, they’re worth a spot on your refrigerator shelf, whether its winter, spring, summer, or fall.

Currently Drinking: Trillium Brewing Double Dry Hopped Sleeper Street
Boston-based culture writer Andy Crump writes about film, television, beer, and music for too many outlets to list. You can follow him on Twitter and find his collected writing at his personal blog. He is composed of roughly 65% craft beer.
@agracru
The 20 Best Beers to Drink in Summer 2021