Can Jam, and the Era of the Better Beer Festival 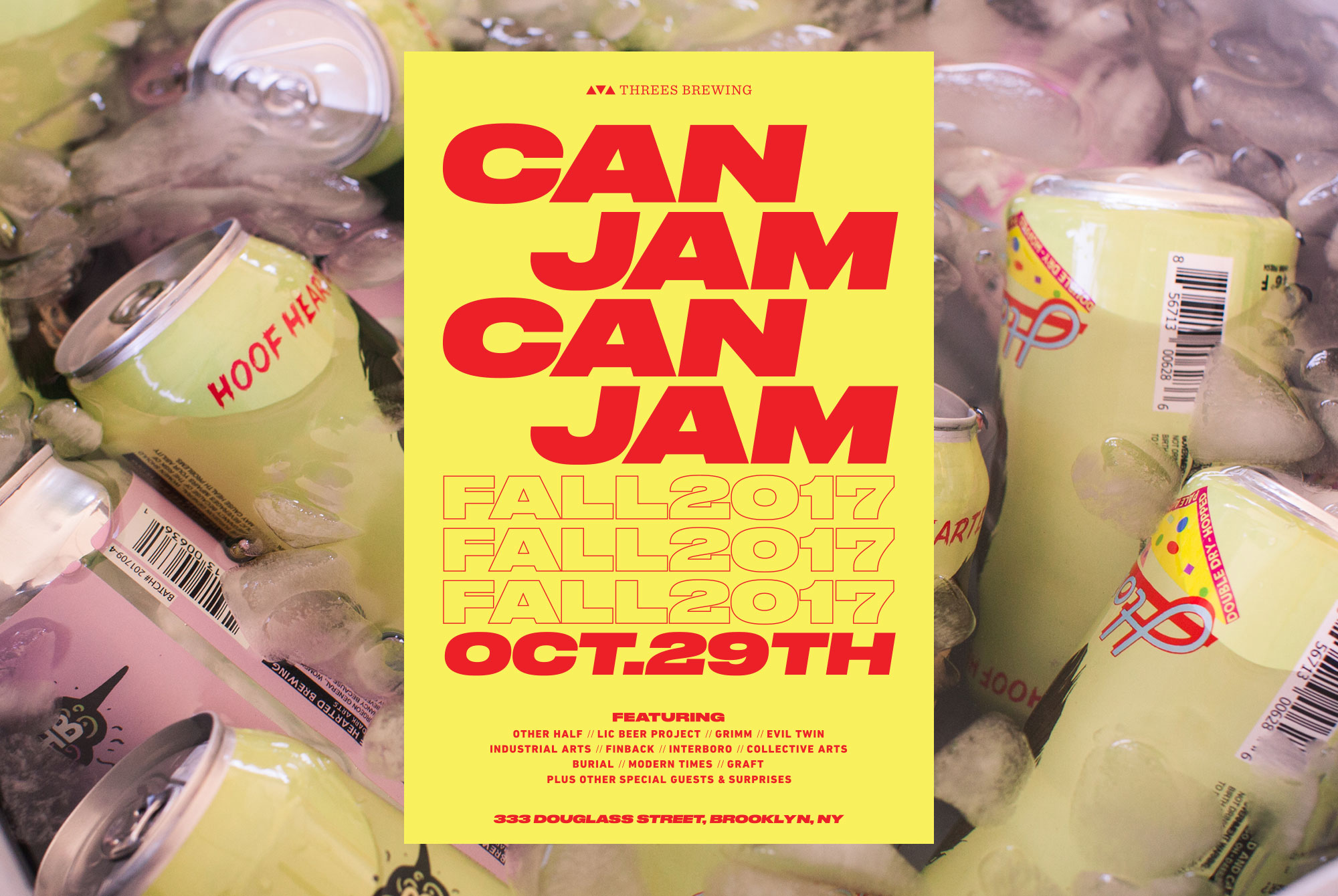 To put it lightly, the craft beer festival scene is currently experiencing some growing pains. “Festival fatigue” is a phrase often thrown around to describe the phenomenon. Once-popular festivals are failing to sell out. The rest are in a race to the bottom, packing as many people and breweries as they can into one high school gymnasium — a buffet of overturned trash cans, unmoving bathroom lines, and nameless volunteers pouring beer.

“The fatigue is from too many beer festivals. How can you differentiate festival A from festival B?” said Joshua Bernstein, the beer journalist and mind behind Can Jam, a popular Brooklyn-based beer festival that will hold its fourth iteration on October 29th at Threes Brewing in Brooklyn. “Just having beer in a room isn’t enough anymore. At work on Monday morning, are they talking about it?”

One festival at a time, Can Jam is course correcting for the worst aspects of craft beer culture. The fetishism of hyped breweries — just visit Tree House on a release day — has fans skipping work in order to line up and buy as many cans as they can, then rushing home to photograph them for Instagram and squirrel them away in the fridge, where they’ll await the day they get packaged and shipped to California or Virginia, where some superfan went through the same exact steps at Monkish or The Veil. Craft beer has become a collectible, and like anything that you polish and put on a pedestal, some of the fun gets rubbed off in the process. Social lubricant has never before been so anti-social.

Enter Can Jam. In the fall of 2016, Bernstein was promoting his latest book, Complete IPA, and instead of “simply going to bar or a bookstore and smiling” Bernstein decided to tie the release to a unique event. And Bernstein, who has been throwing beer-centric events since before Instagram existed, had a different sort of event in mind.

“The idea was not everyone can wait 4 hours or drive 300 miles or find trading partners [to sample the most talked about canned beer],” said Bernstein. “So I figured I’d bring all the beer together in one place.”

The result was an event at Threes Brewery in Brooklyn in which highly coveted cans from big names like Alchemist and Tree House shared the same spotlight as less-hyped Bernstein-favorites like Proclamation and Banded Horn. It’s about indulgence and discovery. But most importantly, you can’t leave with the beer. “Yes they are rare. Yes they are desirable. But they’re just beers so you should be sharing them with people,” says Bernstein.

But most importantly, you can’t leave with the beer. “Yes they are rare. Yes they are desirable, but they are just beers so you should be sharing them with people,” says Bernstein.

By aligning hyped out-of-state beer with up-and-coming local brewers, Bernstein made the beer world feel smaller. And the brewers noticed as well — many of them, including Melvin and Seventh Son — have flown in to hang out and mingle. There aren’t jockey boxes and kegs to deal with. Everything is in cans, just pop and pour. There’s no entry fee either: each can costs $7 and must be consumed on-premise. So if all of your friends grab two different cans, you can have a little impromptu beer share without breaking the bank.

Can Jam is important because of where we are as a nation of drinkers. We’re at an inflection point in the evolution of beer festivals. They can go the way of big beer — the most beer for the largest number of people for the smallest ticket price — or they can stay small and thoughtful. Would you rather race from line to line sampling one ounce samples of beer from breweries who had to pay to get a table, or would you rather let someone else take the reigns, curate the list, pop a can, and say “Enjoy”?

“We’re slowly seeing the change. What the Funk!? is driven from the brewers end of the spectrum, same with Dankness from Modern Times. People are tired of not knowing the quality,” said Bernstein, referencing that lost feeling one gets at a festival like GABF, where big doesn’t necessary mean better. “When you’re walking around a festival that feels like a big box store, with disinterested volunteers, that turns a lot of people off. Let’s not lock people in to 50 or 60 dollar tickets. Let’s take pressure off brewers. We don’t aim for the stars or the gutter, we aim to create a stellar experience for the modern consumer.”

Can Jam puts beer back where it matters — in a full sized can, with friends. Not in long lines or on Instagram. Check it out on October 29th at Threes Brewing, where you can expect beer from Industrial Arts, Other Half, Burial, and Modern Times.