The Best Beer Styles To Drink This Summer 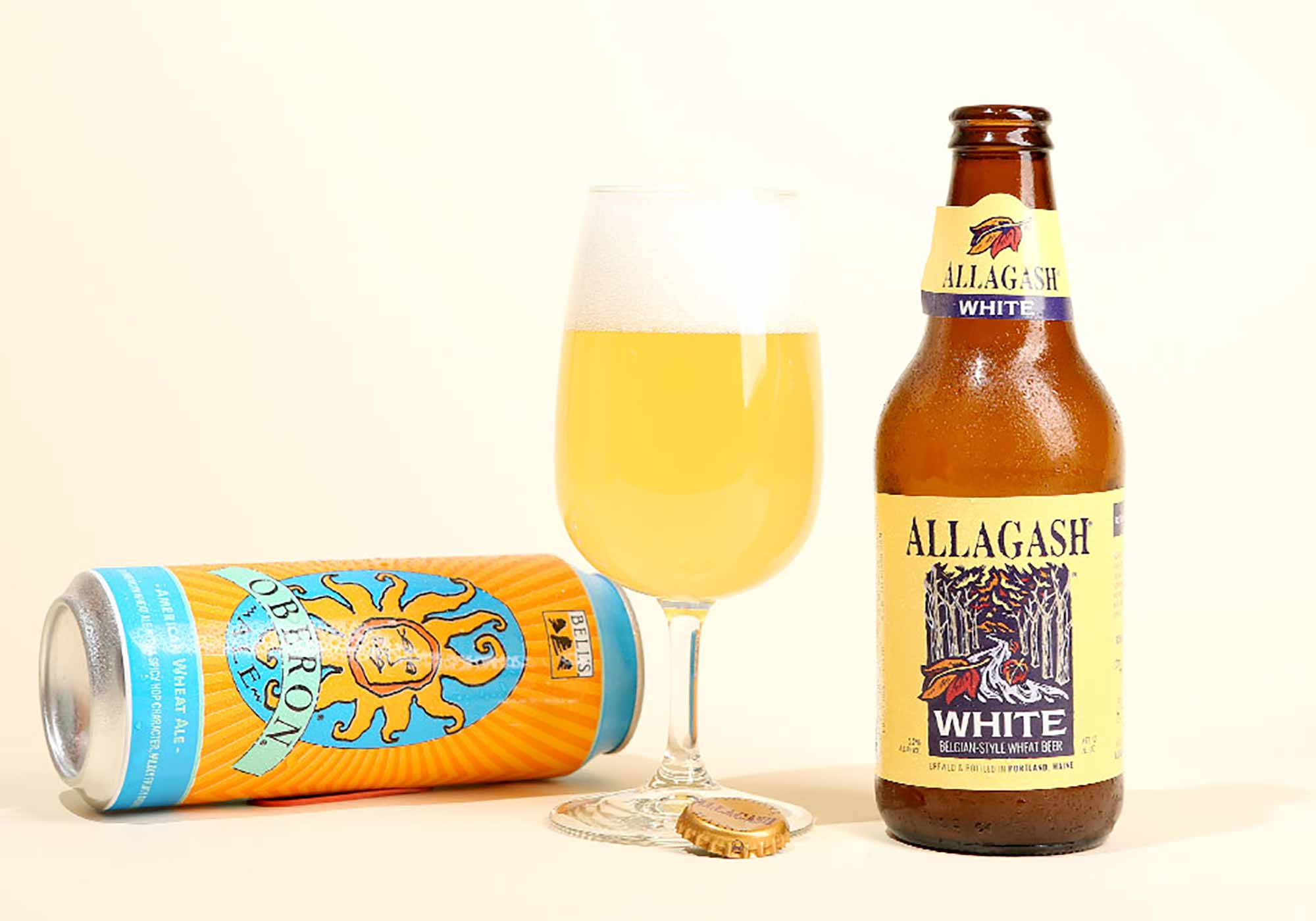 Four score and seven years ago, Benjamin Franklin might have been drinking a beer on the Fourth of July, celebrating his signature on the Declaration of Independence.

Okay, so he probably drank wine. In fact, even though Franklin is commonly attributed with saying, “Beer is proof God loves us and wants us to be happy,” the quote actually comes from a letter to his friend Abbe Morellet, which said, “WINE; a constant proof that God loves us, and loves to see us happy!”

Declared an official holiday in 1941, today’s Fourth of July celebrations generally mean fireworks, pool parties, barbecues, and family picnics. And for craft beer lovers, the holiday is a day perfect for kicking back and cracking a few cold ones.

Since Independence Day usually results in a pretty long day of drinking, we feel that it calls for beers that are lighter, refreshing, and sessionable; You can drink a few without having to take a nap. To celebrate this year, we put together our picks for the eight best summer beer styles, as well suggestions for great beers to try in each category.

Here’s to you Ben Franklin, even if you are a wine lover!

If we’re talking about drinkable, crisp, thirst-quenching beers, then we pretty much just described a Pilsner. These light, hoppy lagers are what we want when the sun comes up. And don’t be fooled. Although it’s light, the Pilsner is actually a very tough style to nail. In fact, we often feel that a mark of a great brewer is reflected in their ability to brew a solid Pilsner. So put the dank, dry-hopped, hop bombs aside and crack one of these honest-to-goodness pilsners.

One to try: Yacht Party from Charles Towne Fermentory – I was first introduced to this Pilsner behind Dancing Gnome’s taproom in Pittsburgh, PA, during a bottle share before our Juicy Brews Birthday Party Beer Festival. Immediately, I fell in love with its ability to stay utterly smooth and quaffable. Needless to say, I crushed a few. Founder Adam Goodwin and the folks at Charles Towne Fermentory are aces at the American-style craft lager, so whether you’re on a boat or not, Yacht Party should be a go-to during your holiday weekend.

Call us biased because we just wrote about this often underrepresented style, but we think that this ale-lager hybrid is perfect for the Fourth of July weekend. With a Kölsch, you get the hoppy notes you want from an ale and the chilled, refreshing finish you want from a lager. It’s a beautiful combination of beer’s defining classifications. Plus, the light body and crisp bite will be perfect for day drinking.

One to try: Sprang from Trillium Brewing – Yes, you can find great styles at Trillium that don’t include the letters I-P-A. What Trillium calls a “Kölsch-inspired ale” includes Nelson Sauvin hops and ferments at a low temperature, slowing the yeast’s metabolism and giving off notes of fruity esters and spicy phenols. Light-bodied and aromatic, Sprang includes notes of concord grape and tropical fruit with a hint of crackery crust. This is a beer that says welcome to summer.

Originally brewed as a quaffable drink for Belgian farmers, Saisons are meant to help you withstand the heat. Saison is actually French for “season” and is a historic, pastoral style characterized by its low alcohol, light body, and high carbonation. With temperatures expected to climb well past 90 around the country for Independence Day, grab a sturdy saison to give you the structure and foundation you’ll need to go the extra mile. Because we know with all those bags you’ll throw, volleyballs you’ll punch, frisbees you’ll toss, and burgers you’ll flip, you’ll be working up a sweat.

One to try: Hop Solera or Saison Spritz from Homage Brewing – We’ve waxed poetic about Homage Brewing before, but this California-based brewery makes some of our favorite saisons. Co-owners Matt and Lauren Garcia work magic with these Belgian-inspired ales, infusing local character and flavor into bright, acidic interpretations. In the past, we’ve enjoyed Hop Solera, a barrel-aged, hoppy saison conditioned on Blenheim Apricots. If you’re looking for something a little simpler, but still very solid, try the Saison Spritz line; it’s a series that features fruits paired with grape varietals. And it comes in a can!

A style brewed as early as the 14th century in Belgium, Witbier literally translates from Dutch to “white beer”. Characterized by an opaque appearance, these wheat-focused beers are typically brewed with coriander and citrus to complement the bready, biscuity notes you’ll get from the heavy dose of grain. Slightly tart and very bright, Witbiers taste like sunshine in a can.

One to try: Allagash White from Allagash Brewing Company – We’re going back to a classic here because sometimes you just can’t mess with American tradition, especially not on the Fourth of July. Over twenty-five years ago, Rob Tod founded Allagash by brewing one beer: A Belgian-style wheat beer called Allagash White. At the time almost no one in America understood the style, but Tod persevered and educated consumers (like Hop Culture Founder Kenny Gould, who counts Allagash White as his first taste of craft beer) about what the style could be. Today, Allagash is one of the most revered breweries in the country, thanks in large part to that one iconic beer. You’ll find White in constant rotation in many of the Hop Culture teams’ beer fridges. And for good reason! It’s just damn delicious. On a day celebrating history and independence, we think it only makes sense to go back to basics. And Allagash White just nails this style in every way shape and form.

Bonus: If you’re looking for another iconic wheat beer to quench your thirst this summer, you can’t go wrong with Bell’s Oberon. Larry Bell, president and founder of Bell’s Brewery, also brewed this beer at a time when no one appreciated the style. But, Oberon grew to be one of Bell’s most popular beers, representing spring and summer. In fact, Bell originally named the beer “Solsun” to reflect his desire to create the perfect summer beer, pulling on inspiration from Belgian saisons, before settling on Oberon.

C’mon you didn’t think we’d write an entire piece on the best beers to drink this summer and not include America’s most popular beer style, did you? And when it comes to the hazy IPA, there really isn’t too much to say here that hasn’t already been said. It would kind of be like talking during a firework display — you don’t need to do it and no one can hear you anyway, so just shut up and enjoy the show.

One to Try: Whatever the next release is from Fidens Brewing – We’re going to reach for the stars (and stripes) on this one. With Hazy IPAs exploding in popularity across the country, there’s certainly no shortage of beers to try. But if you’re able to snag something from Fidens Brewing Co., do it. Do it now. As one of the best Hazy IPA breweries you’ve never heard of, Fidens has been cranking out delicately balanced cloudy IPAs on the level of bigger known names like Monkish, Tree House, and Other Half. Currently brewing in just a 2,000 square foot taproom, the brewery is small, which means supplies are limited.

If you can’t get your hands on something from this super-hyped brewery in Upstate New York (and it’s going to be tough!), we recommend any of these more widely available ones.

Let’s face it — you’re probably going to drink more than one beer this summer. And if you’re gulping down a bunch of double dry-hopped, imperial IPAs, you’re probably not going to feel so great. So pace yourself. There are plenty of session IPAs that dial down the ABV without dialing back on the flavor, from Firestone Walker’s Flyjack to Bell’s Light Hearted. Hey, you could even cut out the guilt completely and go for a non-alcoholic beer. Whatever path you choose here a lower-abv or NA beer will keep you at maximum capacity for the summer.

We love innovation at Hop Culture, from fruit-laden Milkshake IPAs to mad-scientist-concocted pastry stouts. But sometimes we want to keep all the crazy ingredients out of our beer and find one that pairs well with what we already have cooking. A Helles Lager is the perfect beer to complement the whole range of food you’ll be eating throughout the summer. For instance, you can pair it with burgers, steaks, chips, dips, and even red, white, and blue cupcakes (okay, a Helles Lager might not be the best complement to a cupcake). Choose this style of beer to ensure that you’ll have the perfect pint to pair with whatever you’ll be grilling, frying, marinated, or making.

One to Try: Helles from Bierstadt Lagerhaus – Highly regarded as one of the premier lager breweries in the country, Bierstadt cranks out a pretty picture-perfect Helles. The name really says it all here. Keeping things simple by titling the beer Helles, Bierstadt proudly brewers this proper Helles to be an elite, American-made pale lager.

For a beer that will be as bright and colorful as the fireworks in the sky, end the night with a true treat. Dessert-inspired sours have been popping up from brewers across the country who are experimenting with recreating flavors from their favorite desserts. We’ve seen lollipop-inspired beers from Deciduous Brewing and fruit bombs from Decadent Ales. With this style, nothing is off-limits. Cap off your Independence Day with a sweet-tooth indulgence.

One to Try: Blackberry Double Crumble from Barreled Souls Brewing – Known for consistently executing decadent Imperial, barrel-aged stouts, Barreled Souls brews up some pretty extravagant sours as well. Blackberry Double Crumble is an Imperial Fruited Sour Ale with blackberries and vanilla that’s just like its namesake dessert in a can. We’re putting this beer at the end of our list because the 10.2% ABV is going to hit you like Giancarlo Stanton smacking a home run in the 9th inning. Drink this, be merry, and say goodnight to your summer celebrations.

Currently Drinking: Fort Point Beer Co. KSA
Grace is the Managing Editor for Hop Culture and Untappd. She also organizes and produces the largest weeklong women in craft beer festival in the country, Beers With(out) Beards and the first-ever festival celebrating the colorful, vibrant voices in the queer community in craft beer, Queer Beer. An avid craft beer nerd Grace always found a way to work with beer. After graduating with a journalism degree from Northwestern University, she attended culinary school before working in restaurant management. She moonlighted as a brand ambassador at 3 Sheeps Brewing Co on the weekends before moving into the beer industry full time as an account coordinator at 5 Rabbit Cerveceria. Grace holds her Masters degree in the Food Studies program at NYU.
The 20 Best Beers to Drink in Summer 2020